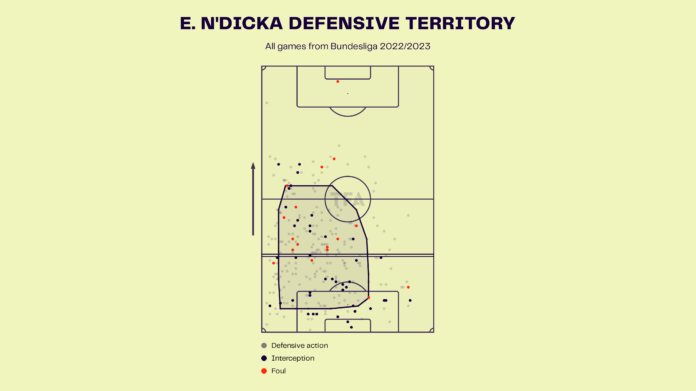 Eintracht Frankfurt is having another great season in the Bundesliga. They are fourth in the Bundesliga with 27 points from 15 matches. They have been brilliant in attack and defence and one of the main players guarding their backline, who is gaining a lot of attention from big clubs across Europe, is the 23-year-old Evan Ndicka. One of the hottest centre-backs in the league, Ndicka has had a brilliant season, with the stats standing strong to speak for themselves. Standing tall at six feet three, Ndicka is of huge importance to the Frankfurt backline. Therefore, we look at his stats to understand why big clubs across Europe are trying to rope in the young centre-back.

Evan Ndicka has played in 15 matches this season, starting all of them. He has been a rock at the backline and has made some crucial clearances and interceptions for Eintracht Frankfurt. 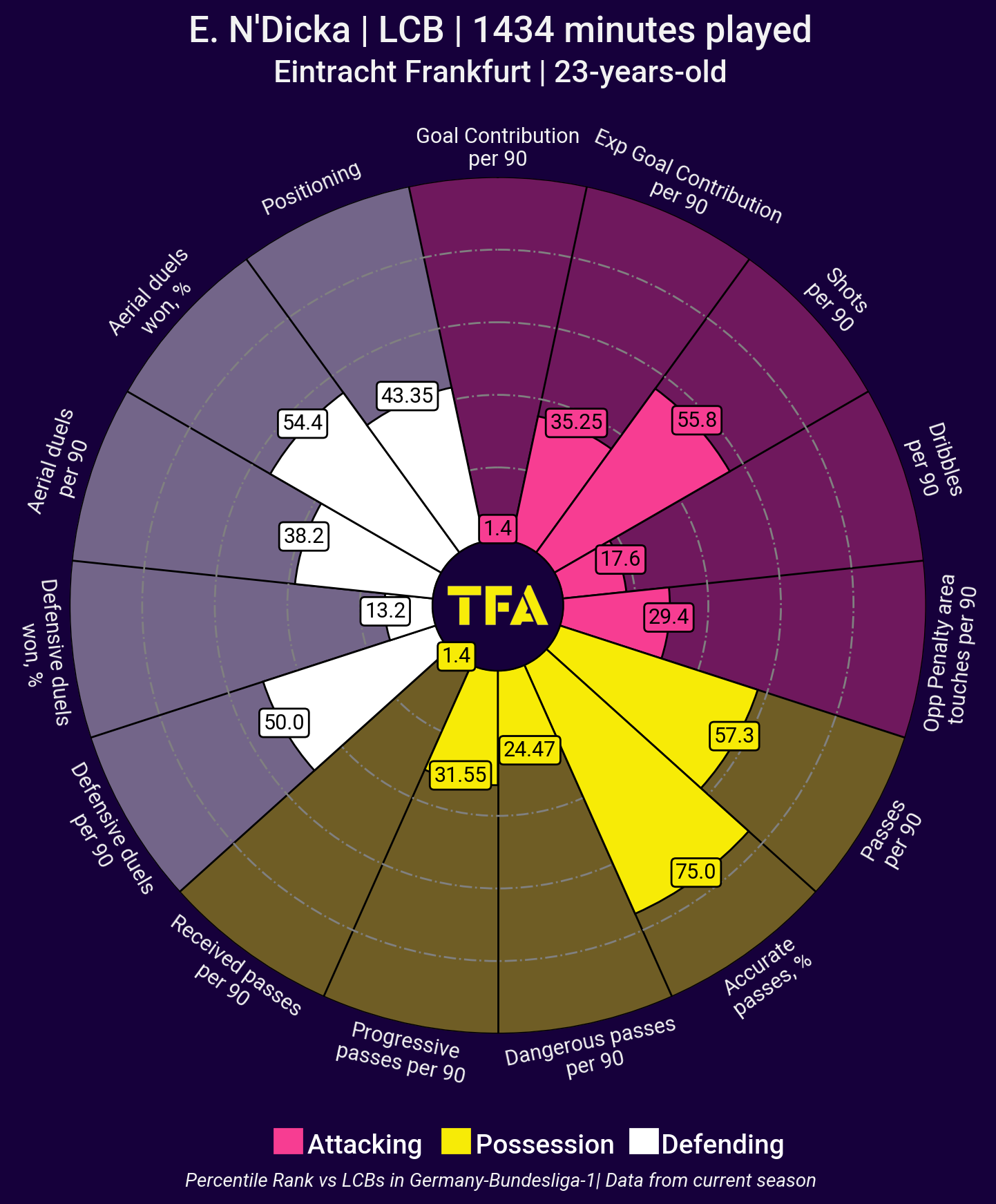 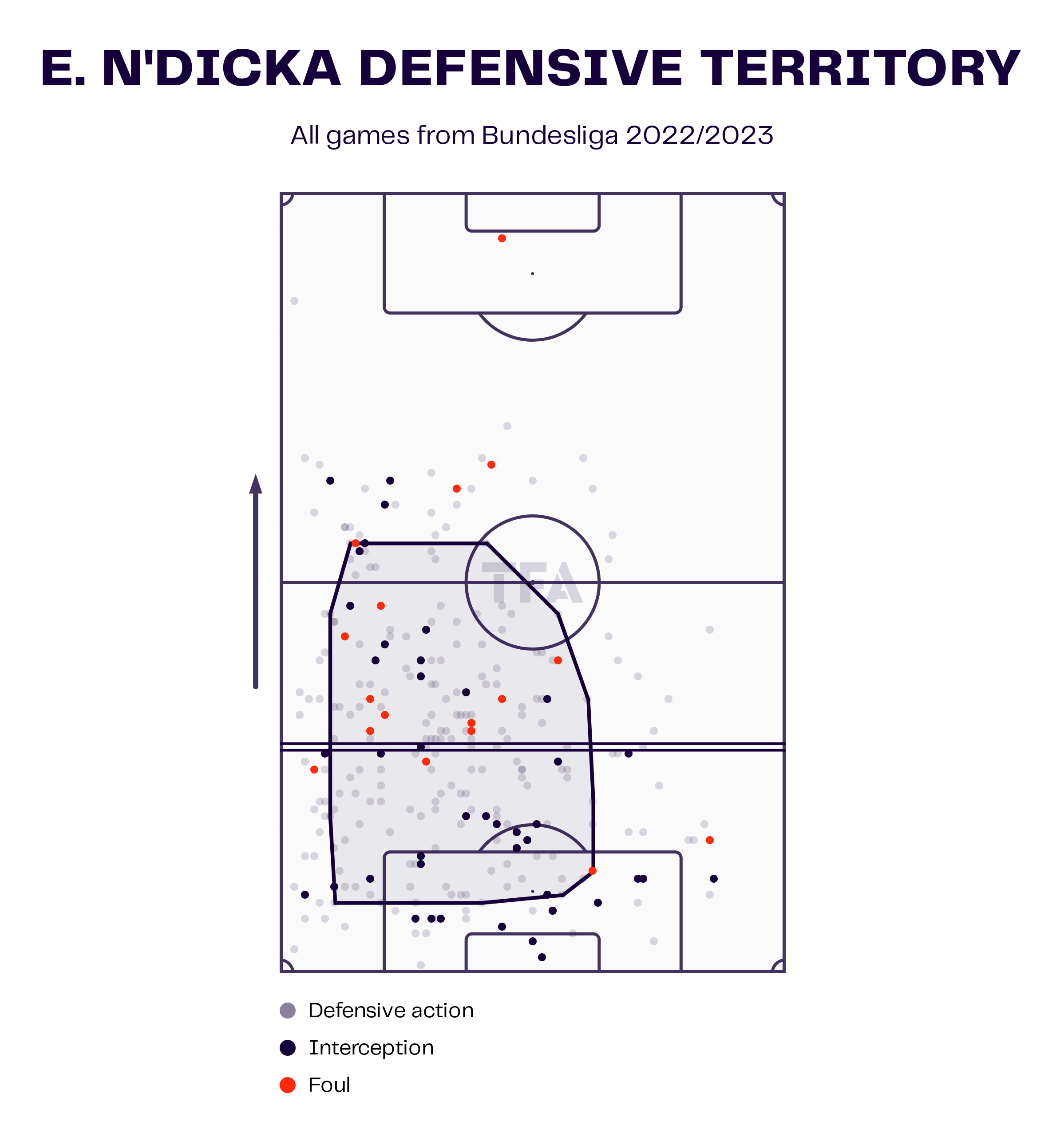 The above visual shows Evan Ndicka’s defensive territory. As we can observe from the visual, he has made many important interceptions at the centre of the backline for Frankfurt. With an average of 6.46 interceptions per game, Ndicka reads the game very well. He also gets involved in around 5.84 defensive duels per game, winning 58.1% of them. He also makes around 3.83 aerial duels per game with a success rate of 57.4%. 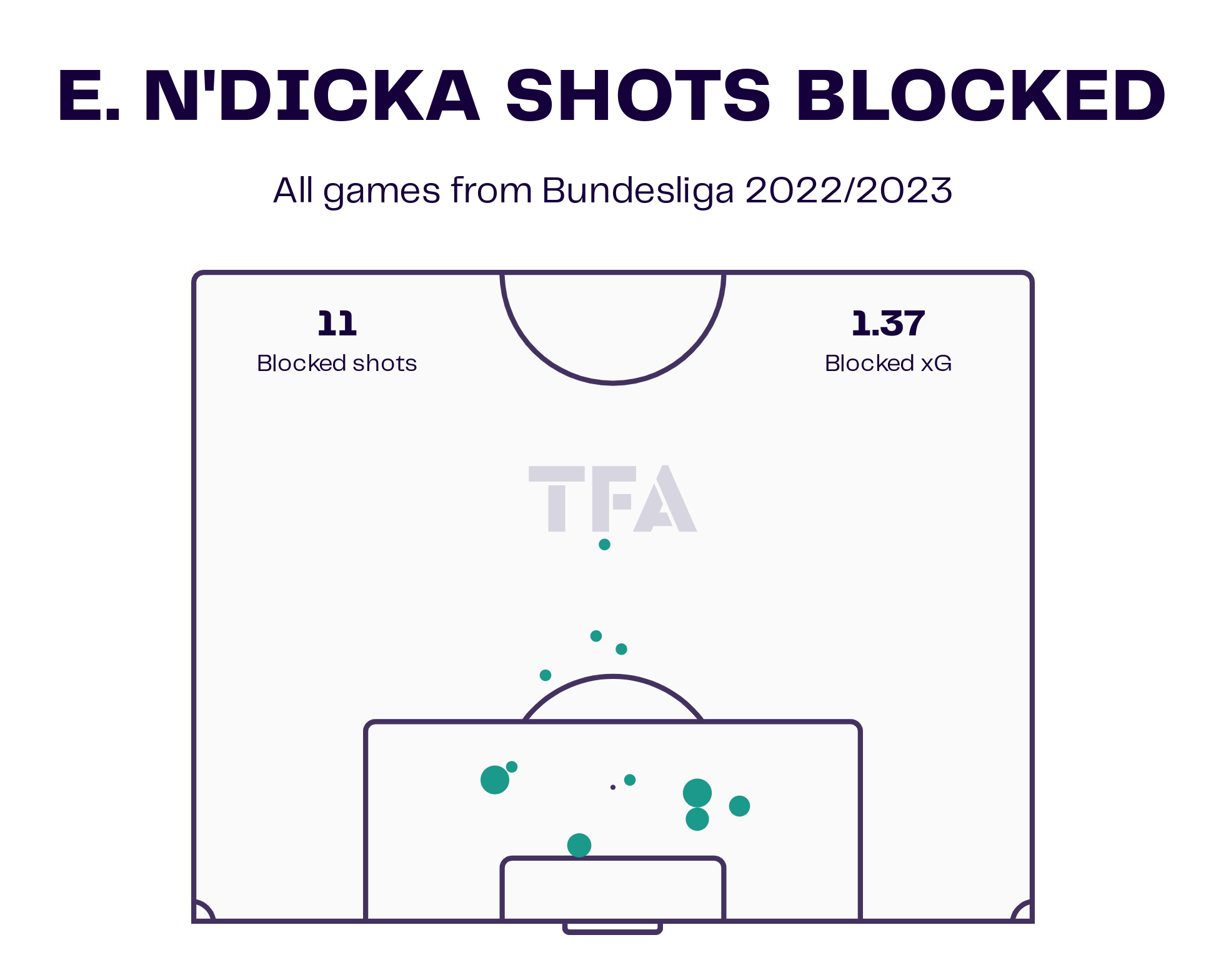 The above visual shows the shots blocked by Evan Ndicka this season. He has blocked 11 shots with an average of 0.7 blocks per game. His tall and strong presence at the back has also helped the team win duels and aerial balls. Ndicka also makes around 3.77 clearances per game. 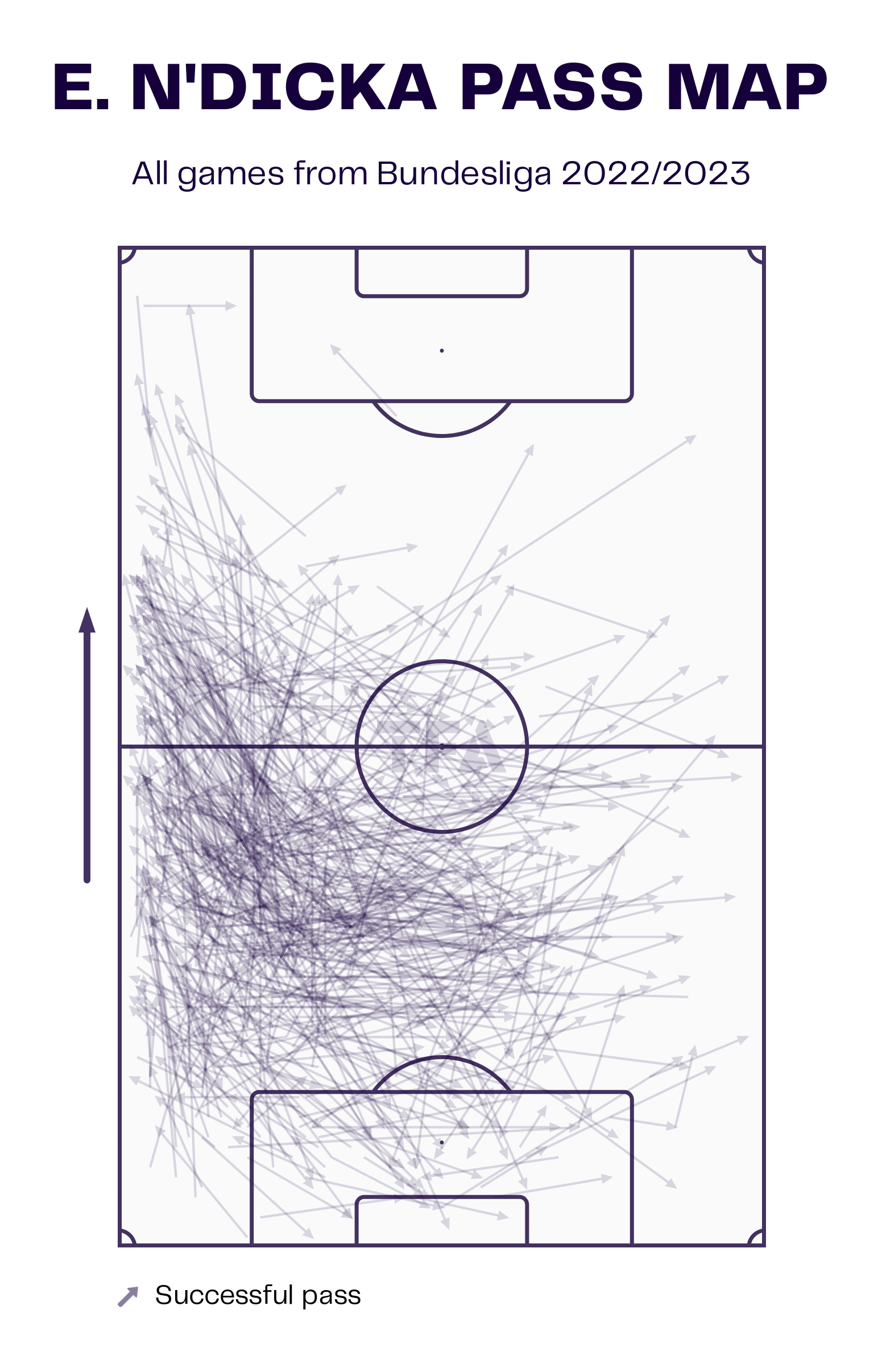 The above visual shows Evan Ndicka’s pass map from the current Bundesliga season. With an average completion rate of 89%, Ndicka averages around 50.65 passes per game. As we can observe from the pass map, he makes a lot of passes, both long and short. He makes around 4.9 long passes per game with a success rate of 50%. Moreover, the 23-year-old makes an average of 3.83 passes to the final third with a completion rate of 63.9%. 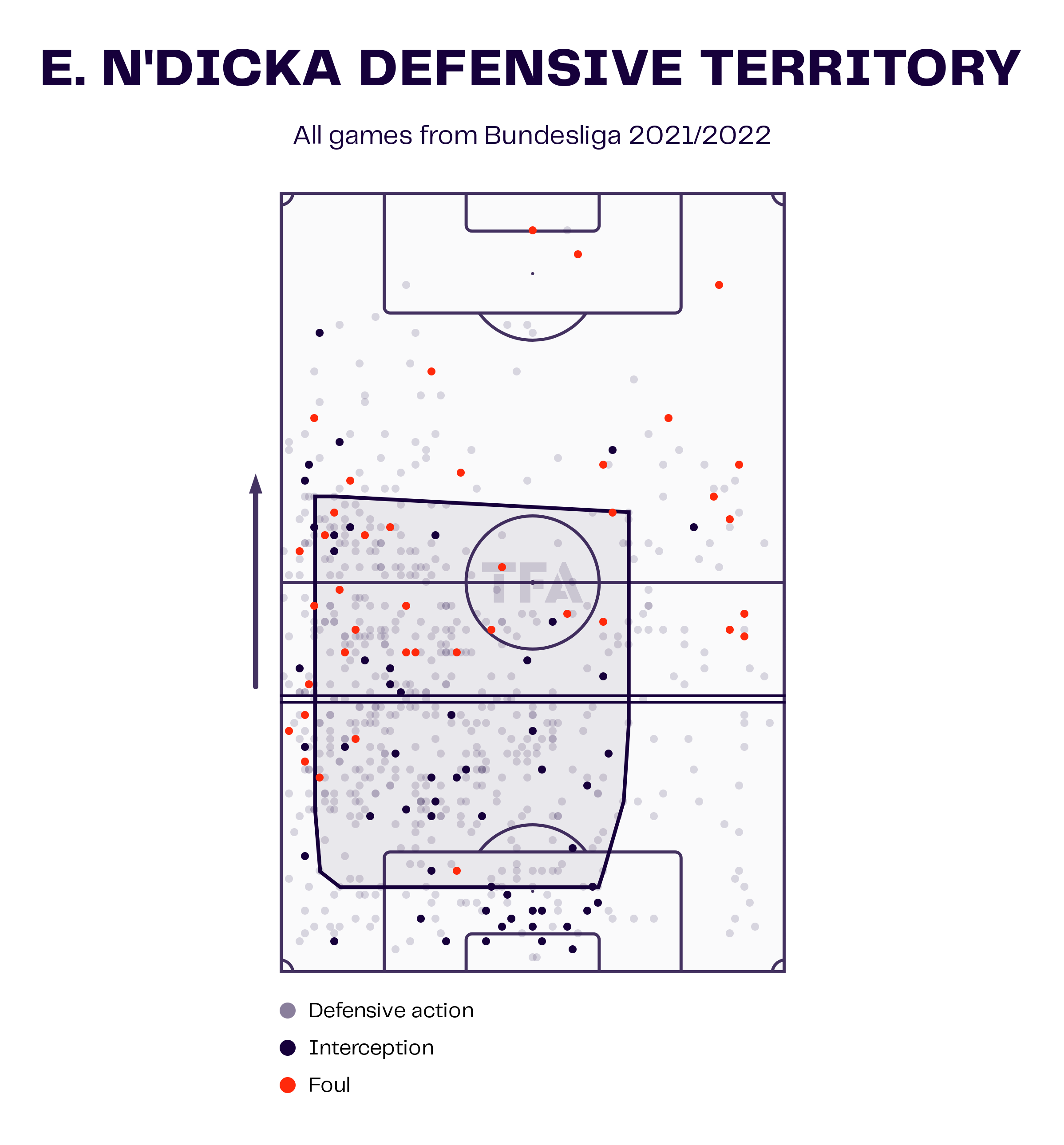 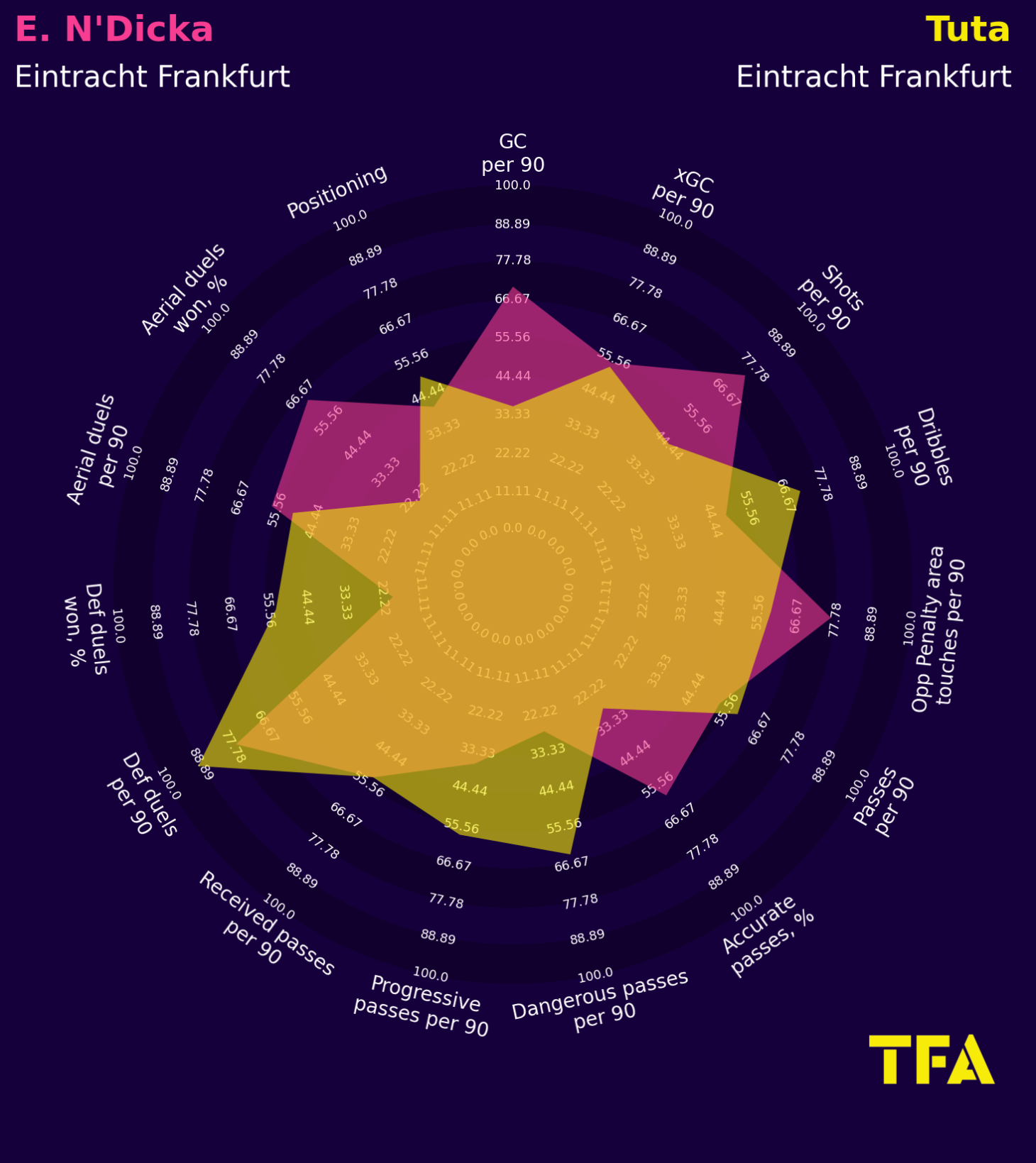 The above visual compares the radars of Evan Ndicka and his teammate Tuta. Both of them play as centre-backs in a three-man backline for Eintracht Frankfurt, with Ndicka on the left and Tuta on the right. Ndicka has better stats in passing accuracy, touches in the opponent’s penalty area, shots, goal contributions, and aerial duels per game. Tuta, on the other hand, has better stats in dribbles, dangerous passes per game, defensive duels, and passes per game. Both have done a great job at the back for Frankfurt.

With the tall, assured presence of Evan Ndicka, goals are hard to come by, and therefore, both markets will be affected by that. While the odds in the 1×2 markets are likely to go up for Eintracht Frankfurt, the underlines are expected to thrive in the over/underlines market.

Evan Ndicka has evolved to be one of the hottest centre-back prospects emerging out of the Bundesliga in recent years. Therefore, naturally, big clubs like Arsenal and Tottenham are trying to rope in the tall centre-back. Even Spanish giants Barcelona are linked with the young defender. Whether he will stay at Eintracht or not is still unclear, but whoever gets to keep him will have gained a brilliant defender.

‘Continue his development’- How Schalke youngster is coming of age