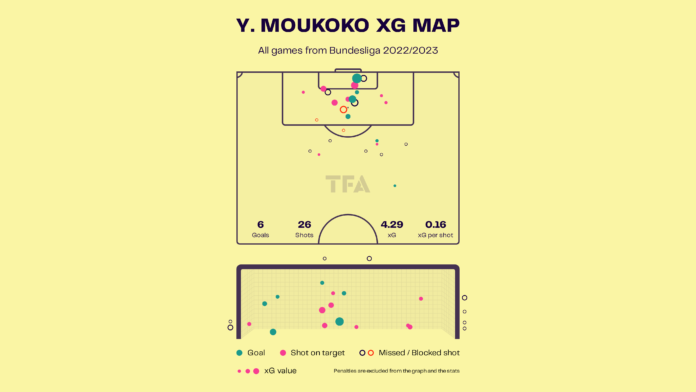 Teenage sensation Youssoufa Moukoko is one of the most exciting talents in world football. The 18-year-old, who is the youngest debutant and goal scorer in Bundesliga history at the age of 16, has clubs waiting in line to sign him. But what makes him so special? We look at some stats to answer this question.

After moving to Germany in 2014, young Moukoko joined the local club, St Pauli, at the age of 11. Seeing his potential, Borussia Dortmund soon signed the youngster. Moukoko made his U17s debut at the age of 13 and had racked up a total of 127 goals and 26 assists by the time he turned 16.

Moukoko didn’t stop there. He made his senior team debut in 2020 against Hertha Berlin, becoming the youngest debutant in the Bundesliga. He has since scored 11 goals and has six assists to his name in the Bundesliga. Youssouf Moukoko is having a brilliant season once again and has scored six goals and four assists. Moukoko brings qualities any striker would love to have: pace, ball control, and net-shattering power. 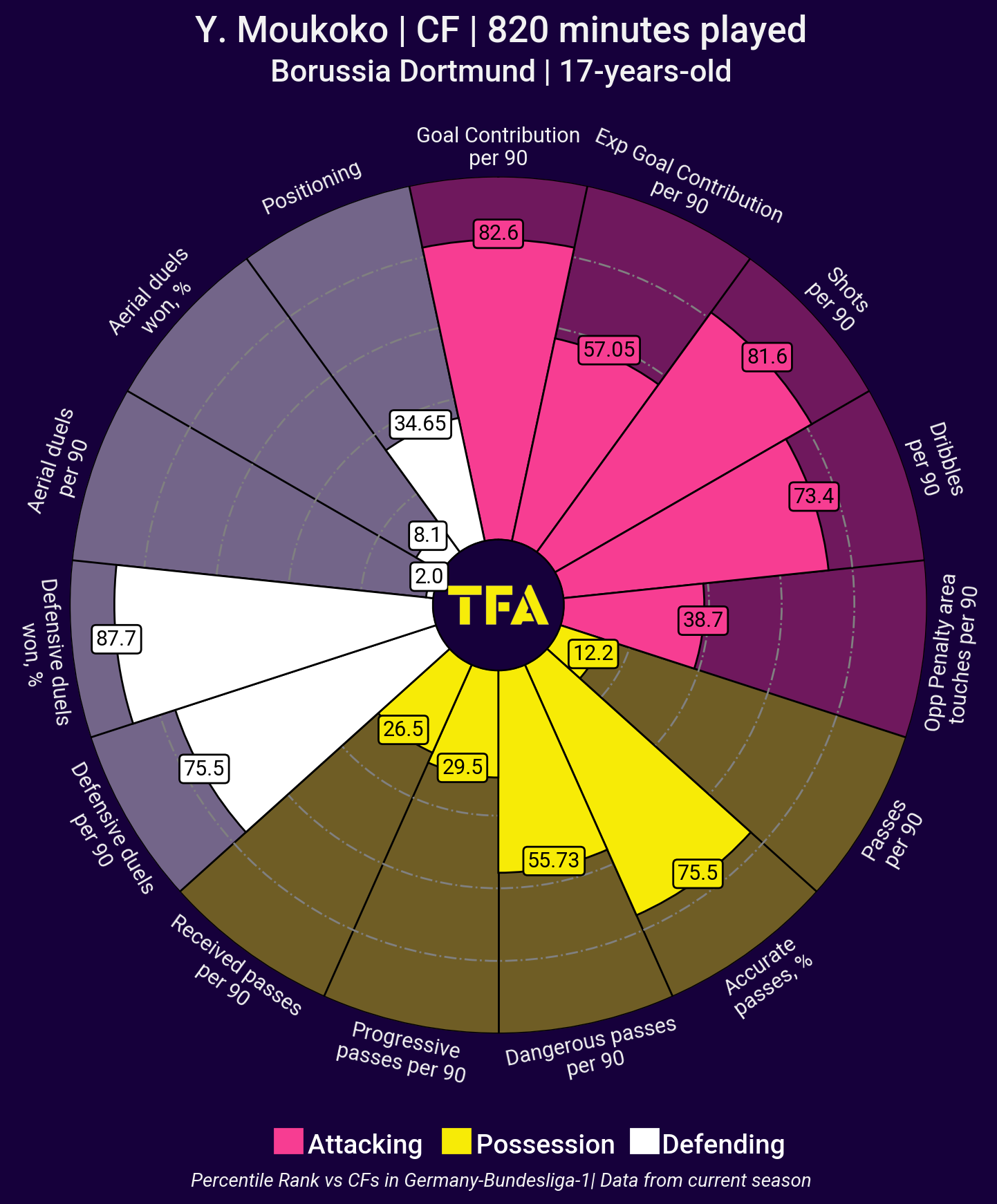 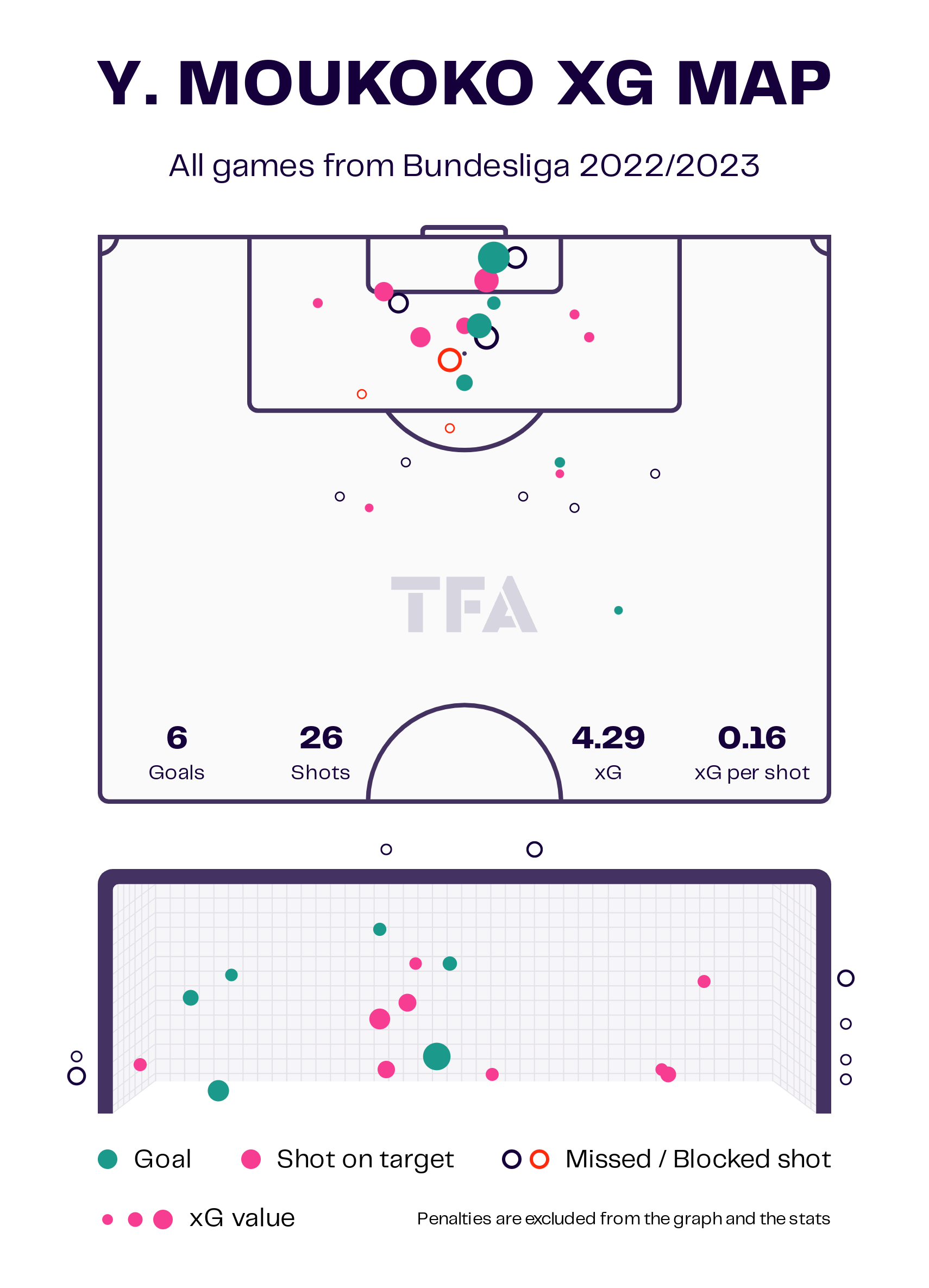 Youssoufa Moukoko can be best defined as a pocket rocket. Anyone who is deceived by his stature will probably be shocked when they see him play. The 18-year-old has a killer instinct in front of the goal and is a very clever player. Moukoko uses his strength and pace to get past the defenders and unleash shots. He has scored six goals this season so far. Out of the 26 shots that he took, 15 were on target. Moukoko averages 2.85 shots per game and has a 57.7% accuracy rate. His goal tally has exceeded his expected goal metric, which shows how good he is in front of the goal. 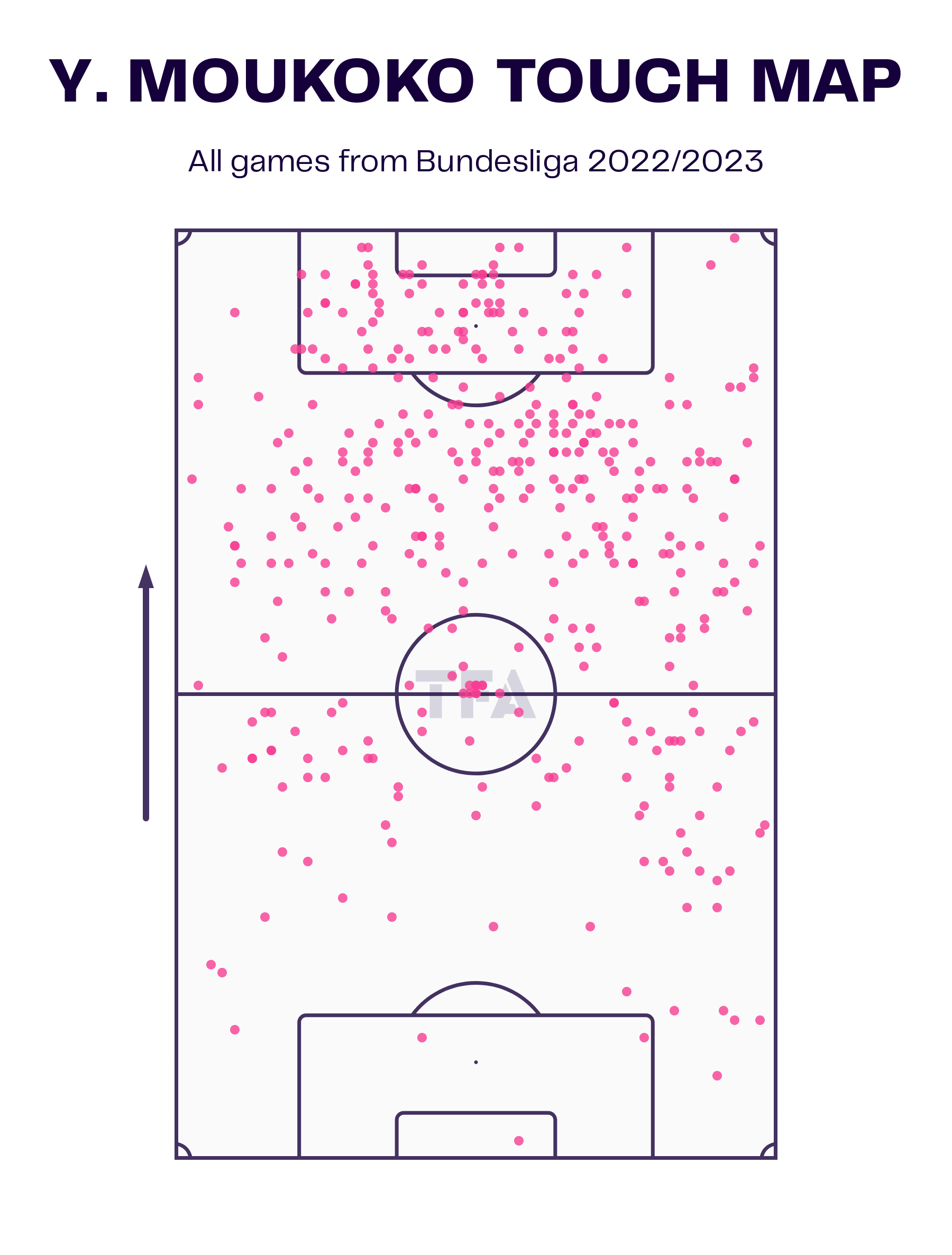 The above visual shows the touch map of Youssoufa Moukoko. We can observe how most of his touches are in the attacking half. Albeit young, Moukoko is a clever player. He positions himself high and runs in behind the defenders. He gets into the penalty box quite often and has an average of 3.18 touches in the box. 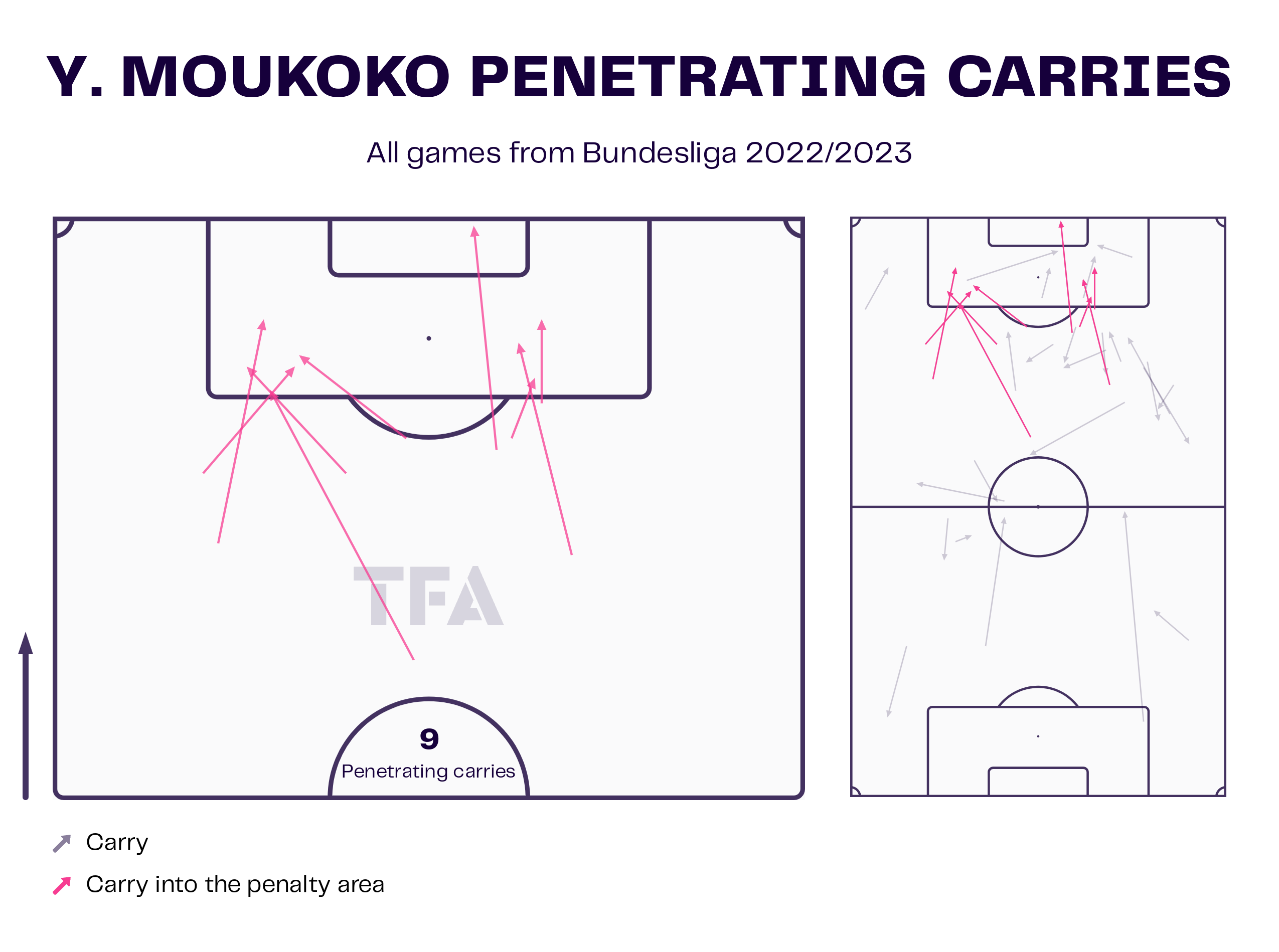 Another one of Moukoko’s strengths is his dribbling skills. The youngster has made nine penetrating carries this season. He averages 4.28 dribbles per game with a 46.2% success rate. He uses his strength and speed to shrug off defenders and go forward. Apart from the dribbles, Moukoko also makes around 0.77 progressive runs per game. With players like Bellingham who have good passing range, these runs bear fruit for Dortmund. 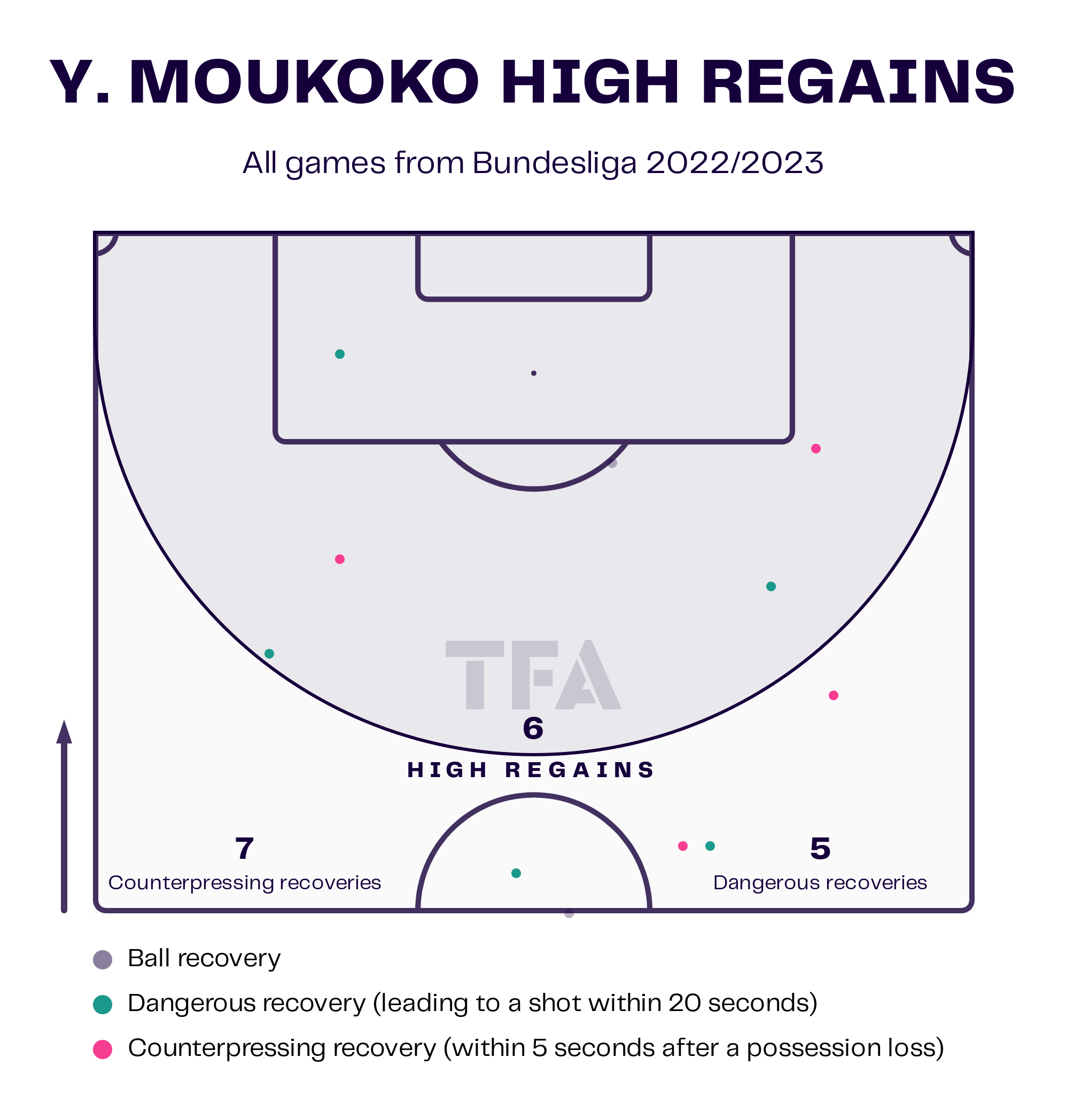 Borussia Dortmund is a team that deploys a high press, so the players in the attacking half will make a lot of recoveries in good positions. Youssoufa Moukoko has made six high returns this season. He has also recovered possession seven times through counter-pressing and five other times through shooting. He makes around three recoveries per game. Even though this is not a high number, Moukoko is adamant about hurting the opposition if he regains possession in the attacking third. The green dot on the right side of the visual represents when Moukoko caught the goalkeeper off his line and scored from distance. 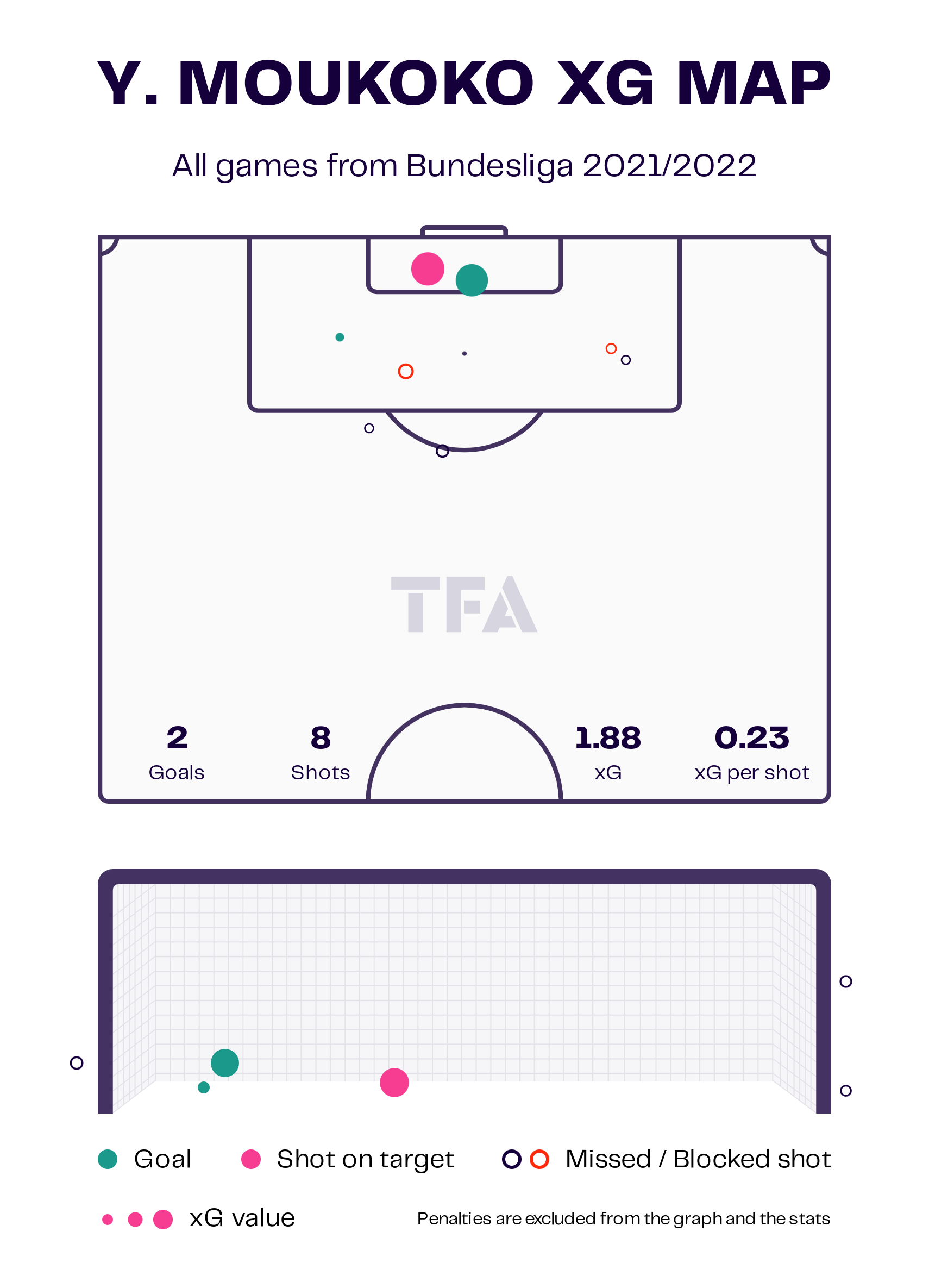 Injuries forced Moukoko to sit on the bench for a long time last season. He only played 16 matches and scored only two goals. Getting injured continuously didn’t help his case either. He attempted 8 shots last season, with six coming from inside the penalty box and three on target. He has easily crossed this tally this season and has scored three times as many goals. 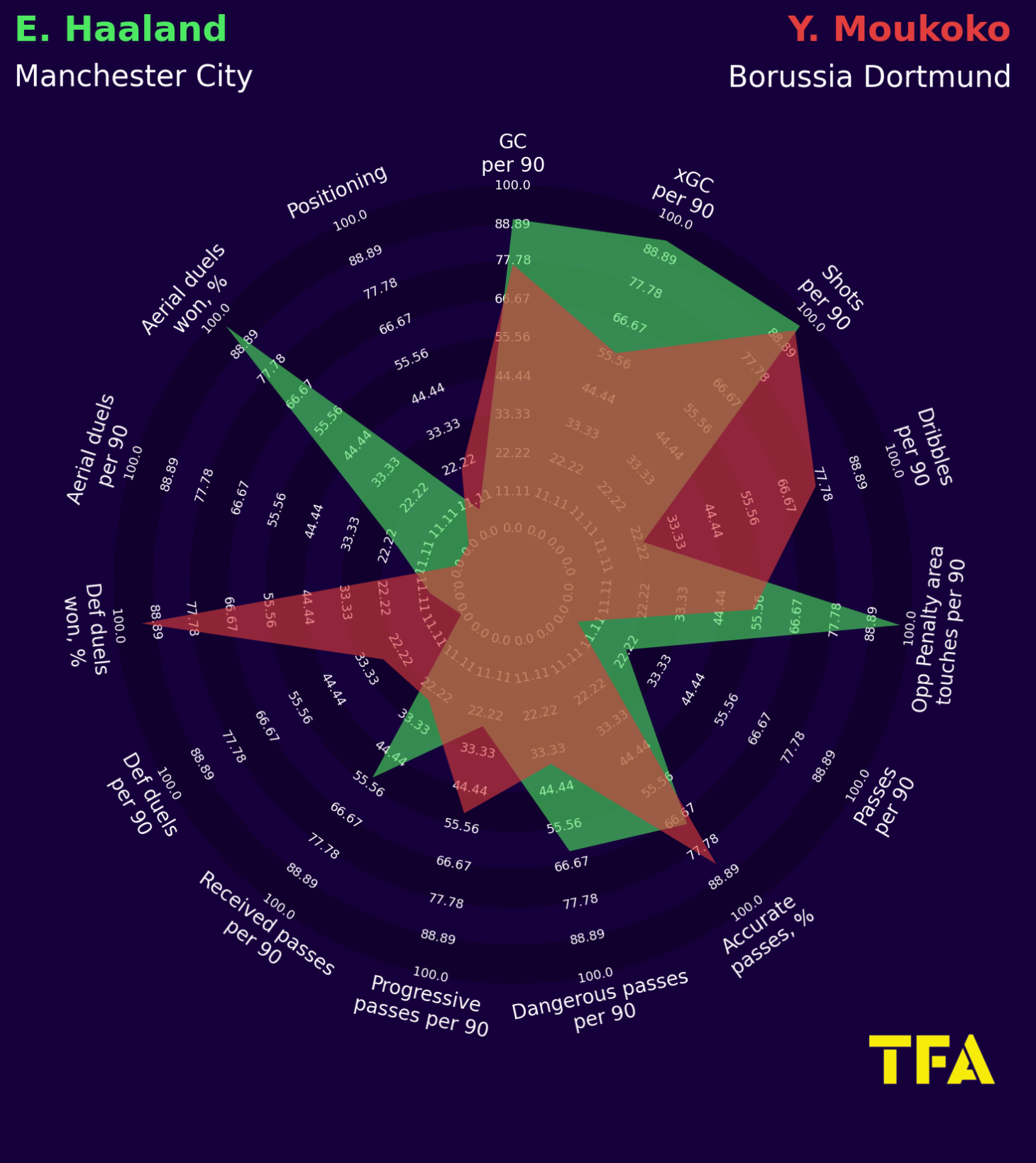 The above visual compares Youssoufa Moukoko’s radar to that of his former teammate Erling Haaland. Haaland, whose game is mainly about being in the box and scoring goals, has more touches in the box, more aerial duels, and more goal contributions. Moukoko, on the other hand, does better in defensive duels, accurate passes, and dribbles. It won’t be surprising if these two meet again in the Premier League, as many clubs are trying to sign the 18-year-old sensation.

Youssoufa Moukoko is without a doubt one of the players to watch out for in the next decade. With his speed, shooting power, and finishing ability, it’s not surprising to see the Moukoko leading the lines for a big fish in Europe. As of now, Moukoko has not decided whether he will stay or leave for another club. But with so many big European clubs trying to lure him in, it won’t be surprising if he keeps the tradition going.

‘Continue his development’- How Schalke youngster is coming of age