Bayern Munich suffered a major setback ahead of the second half of the season when captain and sweeper goalkeeper Manuel Neuer was injured while skiing. Therefore, the Bundesliga’s defending champions are looking for reinforcements in front of the goal. One name that has emerged as an option is Yann Sommer from Borussia Monchengladbach. The Swiss goalie, who made a Bundesliga record of 19 saves against Bayern this season, is one of the best goalkeepers in the world at the moment and definitely in the Bundesliga. He has already made 51 saves this season and is in excellent form.

Therefore, we look at some of his stats to understand if he can guard the Bayern post as successfully as Neuer did in his stead.

Yann Sommer has made 10 appearances this season, starting all of them. He has made 51 saves this season. He has kept three clean sheets this season and has conceded 14 goals for an average of 1.31 goals conceded per game.

Yann Sommer is one of the best goalkeepers in the Bundesliga and has made the fifth-most saves in the league this season. He is ranked in the top 95 percentile for saves. He has made 51 saves with an average of 4.5 saves per game with 60.4% of them through reflexes. Sommer has saved 80% of the shots played at his post and has kept three clean sheets as well. The fact that he concedes (1.31) fewer goals per game than his average xCG (1.55) indicates that he is an excellent goalkeeper.

The above visual shows the saves made by Sommer in the match against Bayern Munich, when he made a Bundesliga record for the most saves in a match. Sommer stopped 19 Bayern shots and was awarded the man of the match. He faces an average of 5.81 shots against his goal but only concedes an average of 1.31 goals per game. The 34-year-old had an xCG rate of 4.66 in that match. The fact that they only conceded one goal in the match was only because of Sommer’s brilliant goalkeeping. 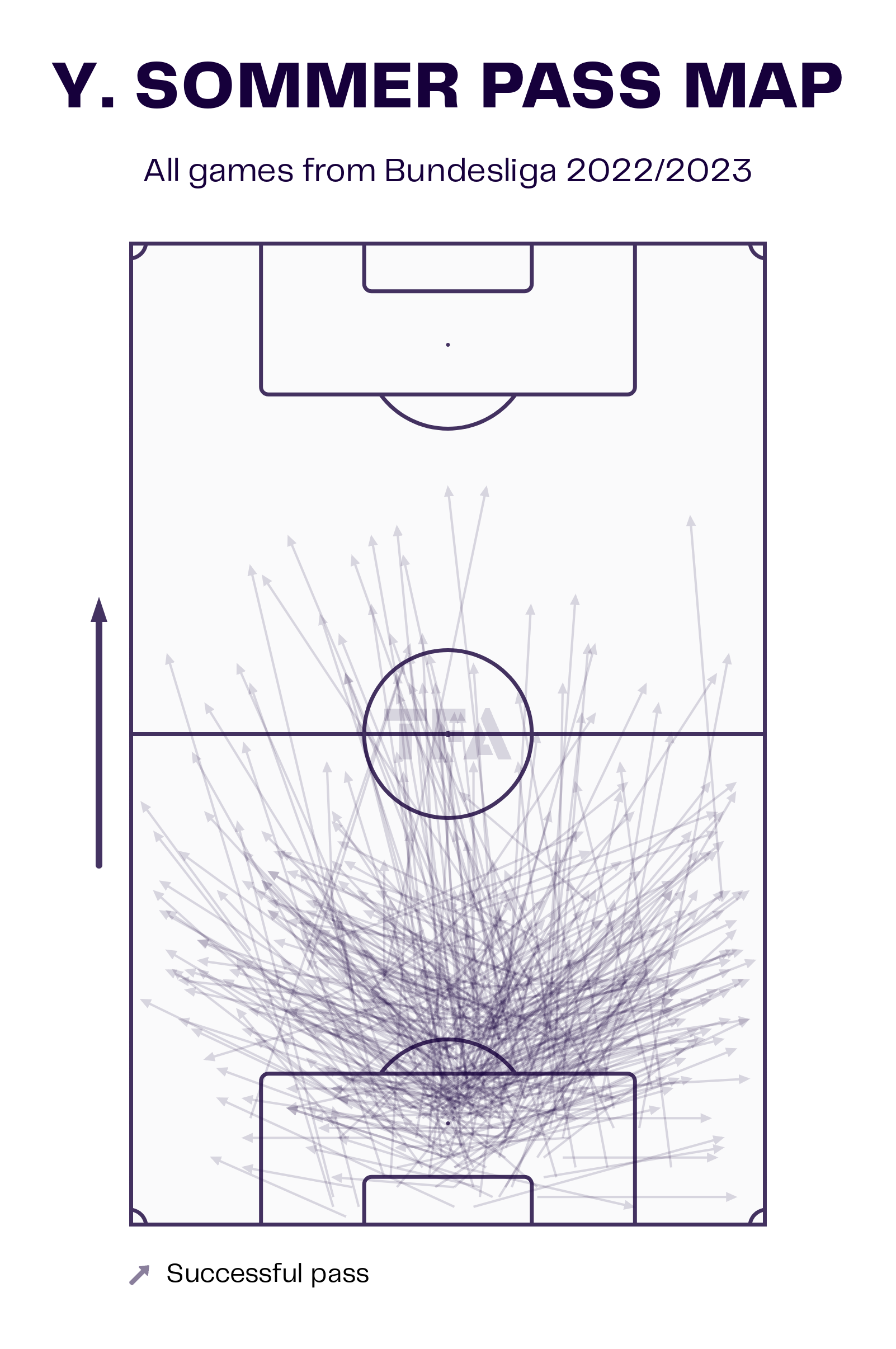 Sommer is ranked as one of the best when it comes to distribution. The above visual shows his pass map. He has a passing accuracy of 91.4%. From the above visual, we can observe that he plays a lot of passes to the wing-backs, either by hand or by foot. He has 99.4% accuracy for short passes and 67.8% accuracy for long passes. Sommer is also capable of finding the striker with a long goal kick and takes an average of 2.72 long kicks. His preferred method, and that of Bayern Munich, is short goal kicks, and he takes an average of 5.53 with 99.4% passing accuracy. 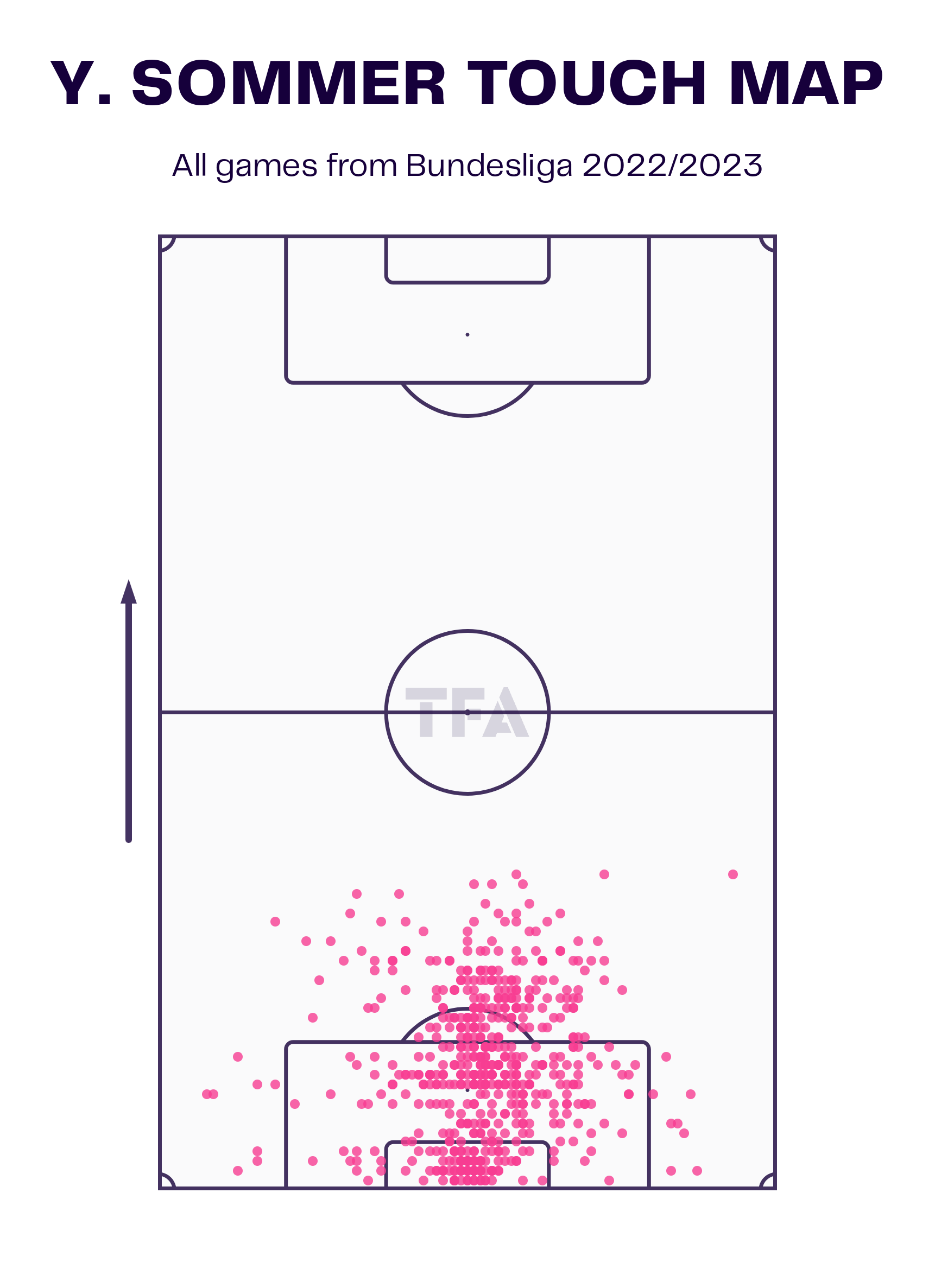 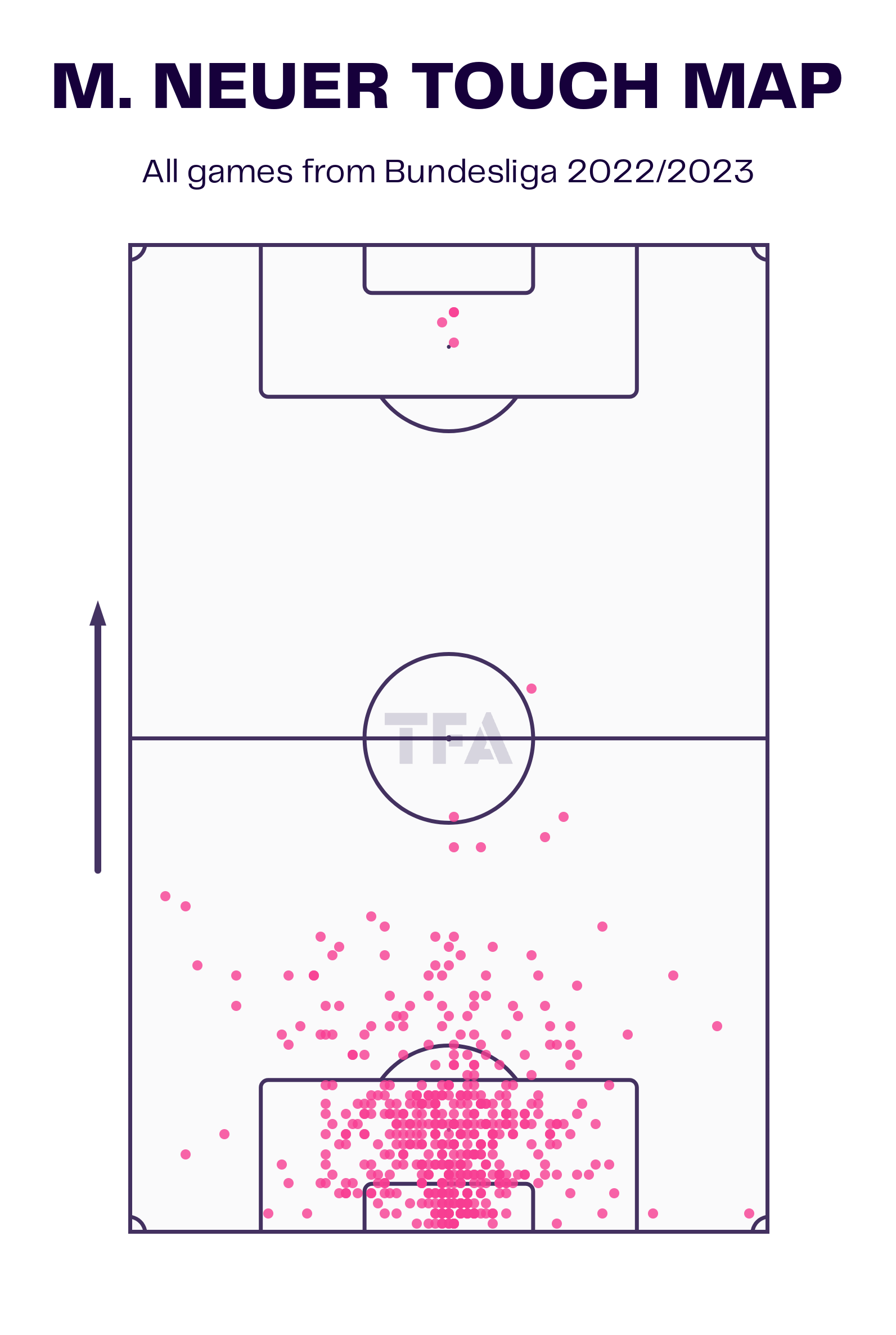 One of the most difficult aspects of replacing Neuer is replicating his ability as a sweeper keeper. The German has the reputation of coming forward and clearing the ball before the opponent could get to it. The two visuals above show the touch maps of Yann Sommer and Manuel Neuer. We can observe from the maps that Neuer certainly comes out more into the midfield than Sommer. But Sommer has also done this enough, though not as much as Neuer. As long as he makes the right decision about when to go forward and when to stay back, this wouldn’t be an issue.

Compared to last season, Sommer is in much better form. He made an average of 3.45 saves last year, with 64.4% of them coming from his reflexes. This figure has gone up this year to 4.5 saves per game. The goals conceded have also come down from 1.75 to 1.31 goals per game. He conceded 60 goals last season, but halfway through this season, he has only conceded 14 goals. The above visual shows the saves he made against RB Leipzig last season. He made five saves and conceded one goal. They went on to win the match 3-1.

Can Sommer be as efficient as Neuer? 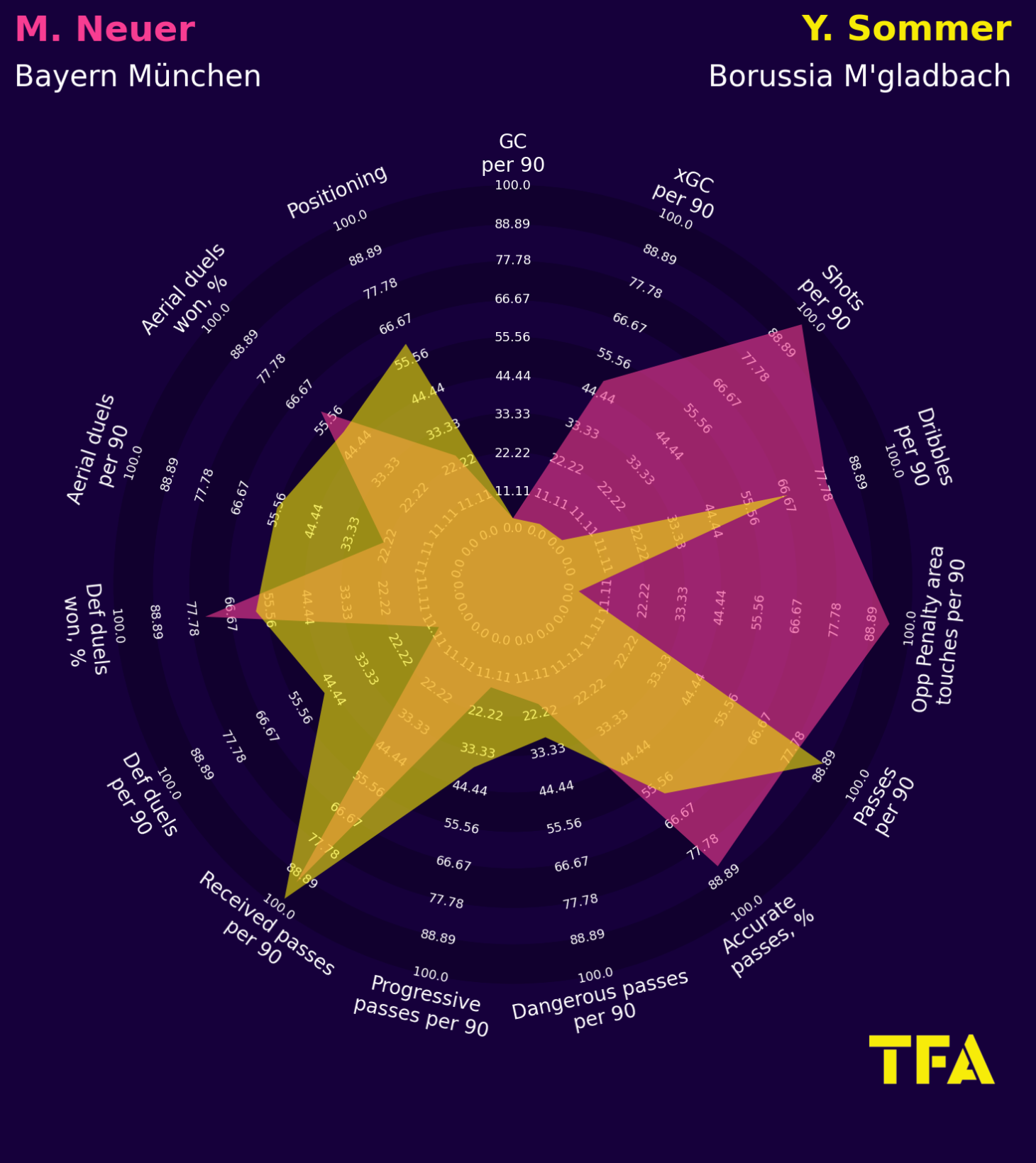 Replacing Manuel Neuer is never an easy task. Neuer has built his reputation and is one of the greatest goalkeepers of all time. The above visual compares the radars of Yann Sommer with those of Manuel Neuer. We can observe from the visual that Sommer has better stats in defensive duels, aerial duels, and positioning, while Neuer takes the upper hand in passing accuracy and duels won.

Manuel Neuer’s absence will be a huge blow to Bayern Munich, especially with big matches coming up in the Champions League. Replacing him won’t be an easy task, but if Bayern management convinces Sommer to stay for the rest of the season, they can sit at peace knowing that Neuer’s place is taken by one of the best in the Bundesliga.

Under the microscope: The metrics behind Marcus Thuram’s exceptional season