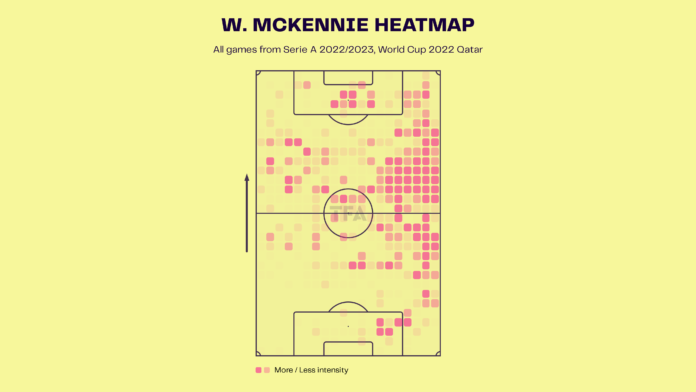 Borussia Dortmund have gained an unwanted reputation for building young talented players only for them to leave for a better club. From Aubameyang to Erling Haaland, the list is a long one. Another name that could potentially be added to the list is 19-year-old, Jude Bellingham. The Englishman is on the radar of some of the biggest clubs in Europe, and Dortmund have already started to look for his replacement.

A player whom the board thinks can be a viable replacement is the American midfielder Weston McKennie. McKennie had a spectacular World Cup campaign and was a crucial cog in the USMNT midfield. With his versatility and football IQ, McKennie could be the next American to play for the Bundesliga side after Christian Pulisic and Gio Reyna. Therefore, we take a look at his stats to understand why McKennie could be a viable replacement for Jude Bellingham. 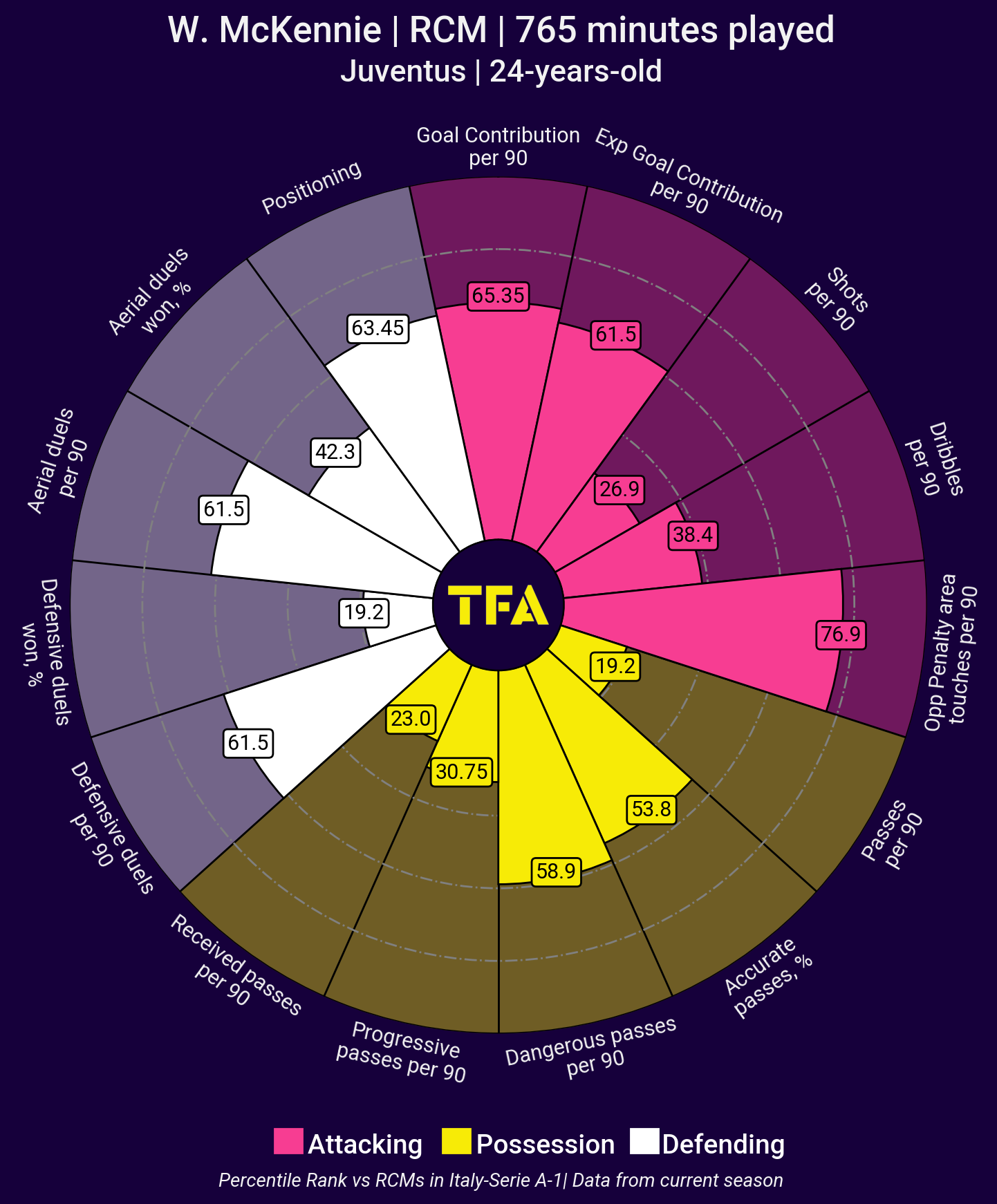 The versatile midfielder has played 11 matches, starting nine of them and coming off the bench in two. The 24-year-old has registered a goal and an assist for Juventus this season. He has decent stats in all the departments, a good percentile score for entries into the opponent’s penalty area, and decent passing stats. McKennie also has a decent defensive score and does relatively well in aerial and defensive duels. 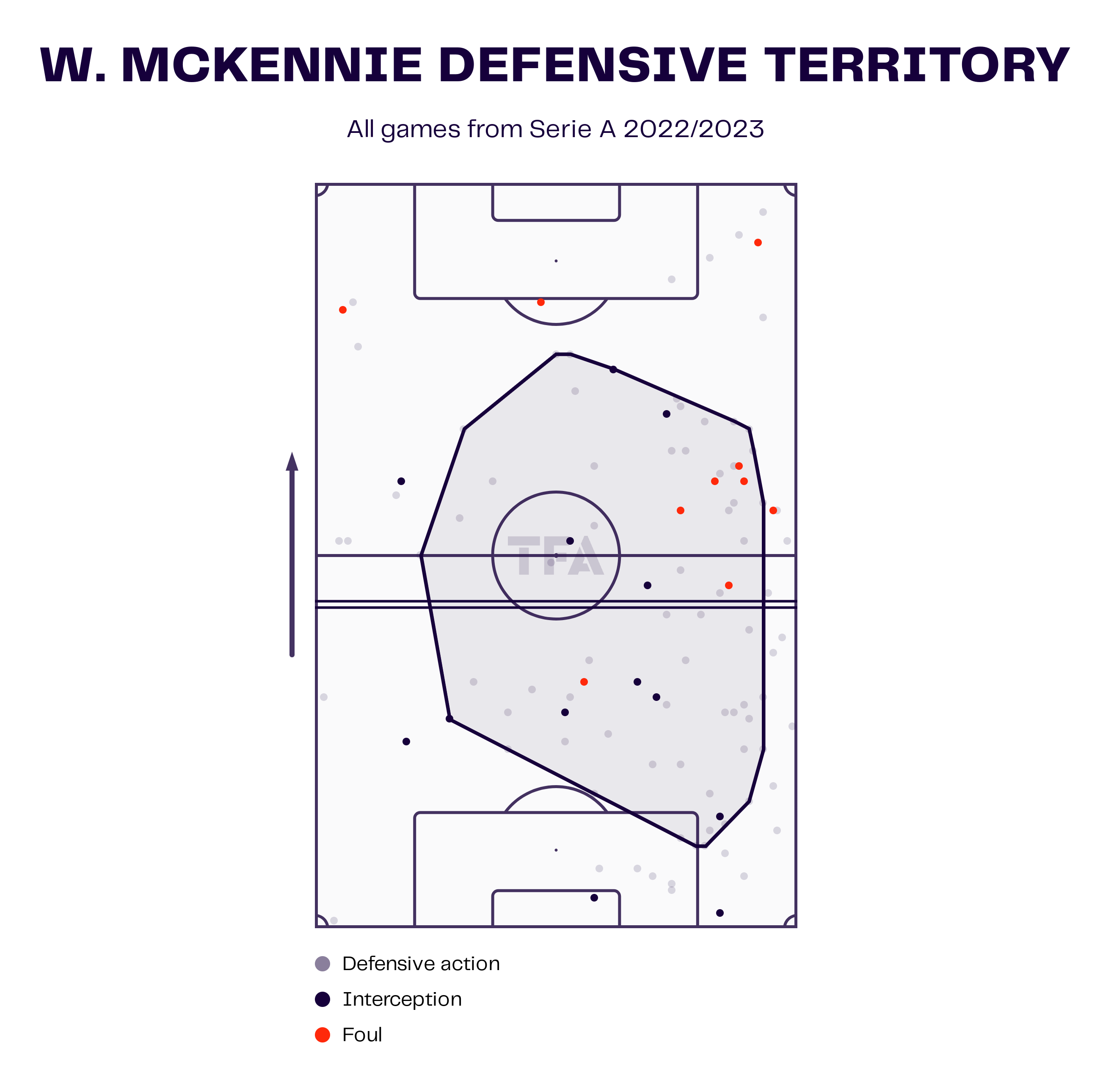 One of the strong suits of Weston McKennie is his defensive game. McKennie, who usually plays as a right-central midfielder, does his defensive duties well. The 24-year-old takes part in around 7.41 defensive duels, winning 49.2% of them. He is energetic and covers a lot of ground. McKennie also makes around 3.18 interceptions per game and wins the ball back in the midfield. 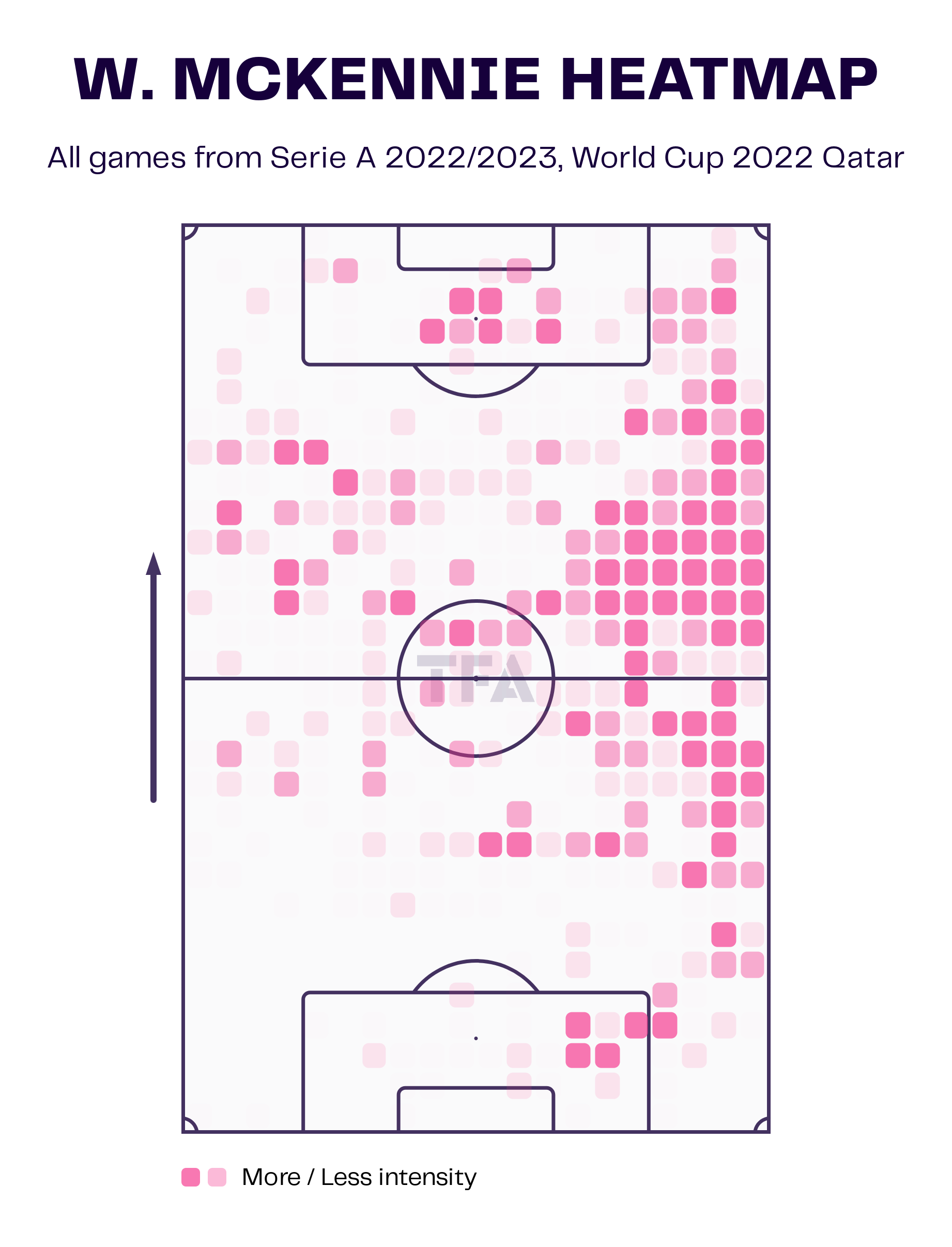 The heatmap above shows the areas where McKennie performs most of his actions. Playing as a right-central midfielder, he contributes to the attack and defence. The 24-year-old midfielder makes some interceptions in the midfield and helps in transitions. 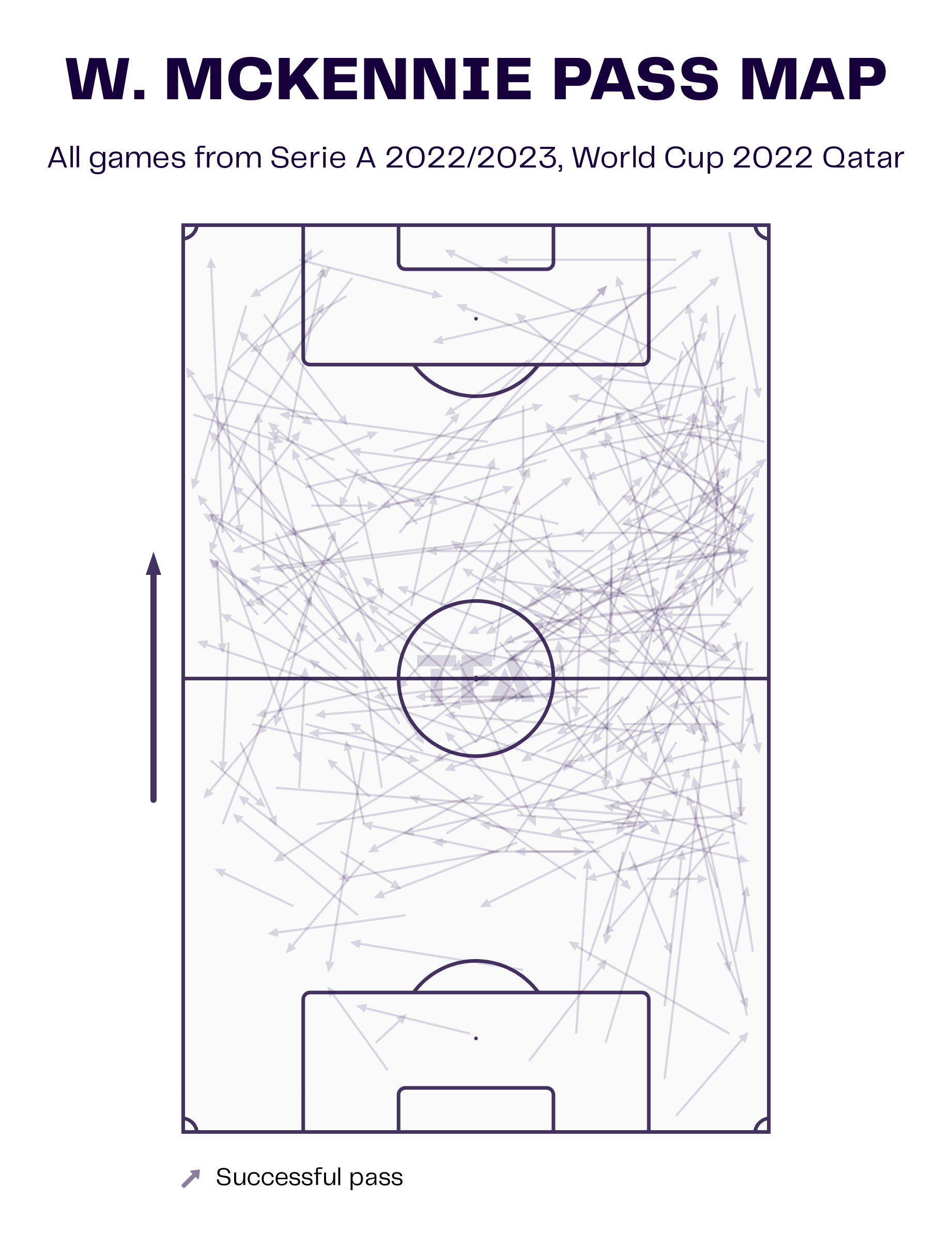 Weston has decent passing stats and is ranked in the top 58.9 percentile for dangerous passes per 90 minutes, which is above average. He has completed 84.4% of the passes that he played this season for Juventus. The pass map above indicates that McKennie is everywhere on the pitch and finds some good passes. He makes an average of 2.94 passes into the final third with a 56% success rate. If he has to fill in the shoes of Jude Bellingham, these numbers will have to go up, as Bellingham contributes a lot to the attack. 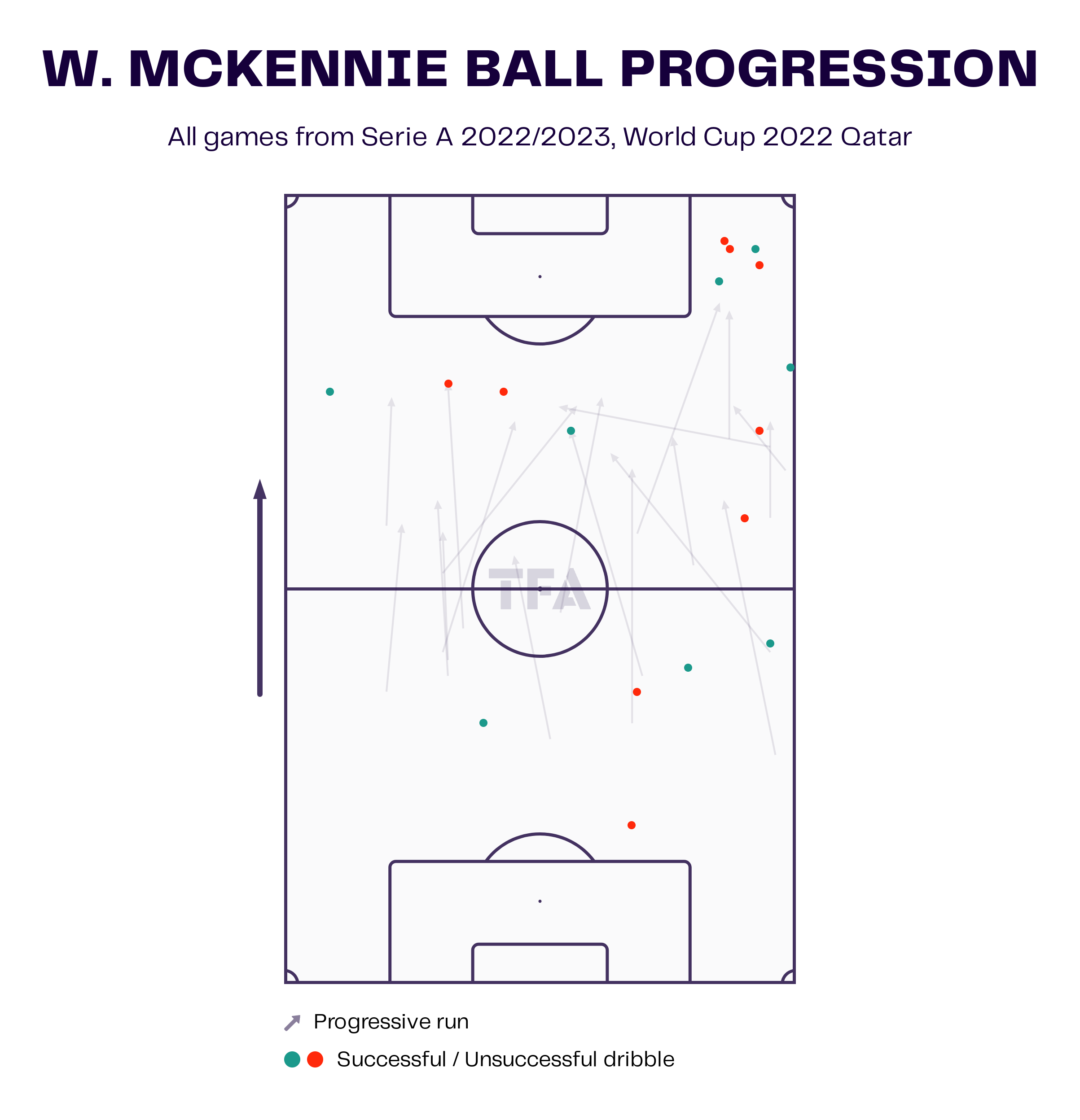 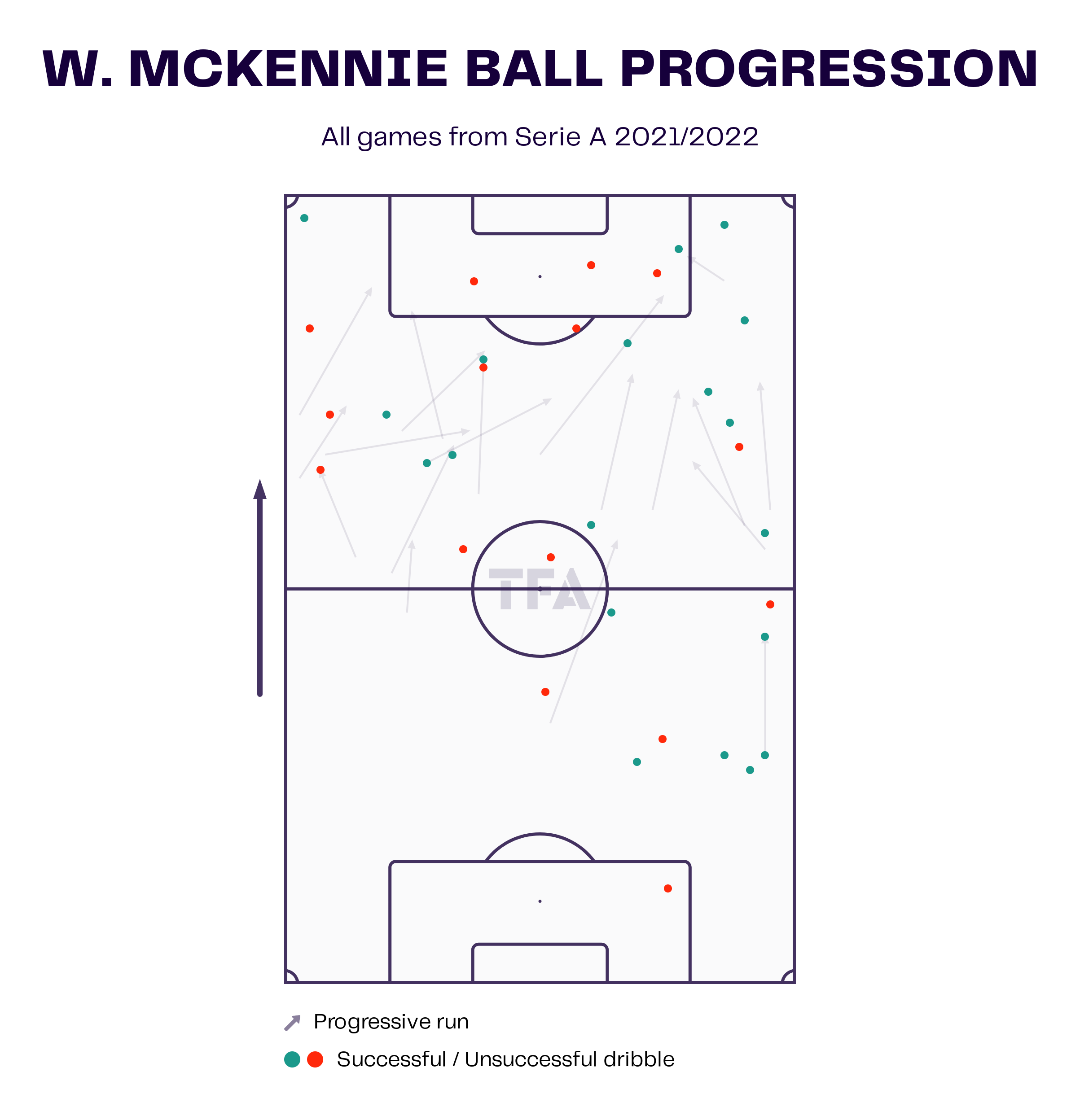 Another area where McKennie will have to show improvement is his dribbling. While McKennie is not a bad dribbler, he will need to do it more often to not let BVB fans miss Bellingham. An average of 1.29 dribbles per game might prove to be a bit less than what the team needs, but provided that he can make the crucial interceptions and find the passes, it could suffice. The midfielder also makes around 1.06 progressive runs per game.

However, these figures have seen a decline from last season. Last season, he made an average of 2.49 dribbles per game with 48.8% success. On top of that, McKennie also made 1.55 progressive runs as well. The midfielder will have to regain his dribbling form to replicate the work Bellingham is doing for Dortmund.

Would McKennie be able to replace Bellingham? 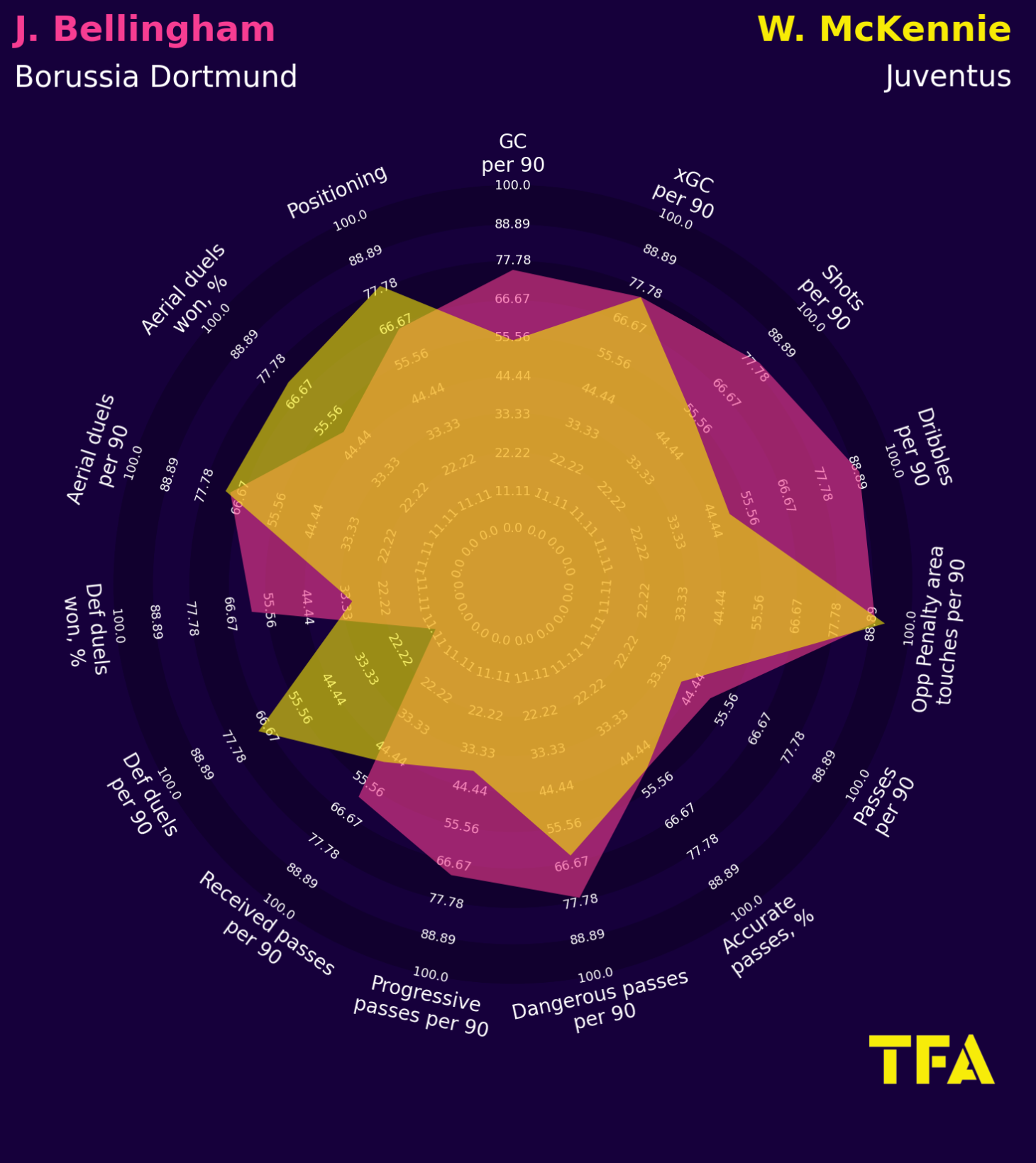 It won’t be easy for Weston McKennie to suddenly fit into Jude Bellingham’s role. He has built up a reputation and an expectation that won’t be easy to meet. But what McKennie can do is what he does best. The USMNT midfielder can win the ball in the midfield, position himself well, and win duels. These recoveries will help Borussia Dortmund launch attacks. But McKennie will need to work hard in other areas like dribbles, shots, and passing, where Bellingham dominates.

Weston McKennie had a good World Cup campaign. He, along with Tyler Adams, was brilliant in the game against England and caught the eyes of many football fans. Weston McKennie is one of the many options Dortmund is exploring to replace Bellingham. Moreover, he is also wanted by many Premier League clubs as well. But if the American moves to Signal Iduna park, it will be interesting to see how he fills the void Bellingham leaves.

Under the microscope: Why Marcus Thuram is a striker in high...