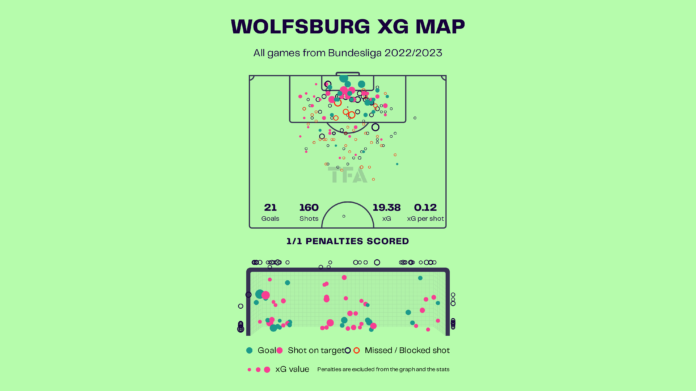 VfL Wolfsburg is on a dream run in the Bundesliga, having lost only one match in the last ten. They currently sit in seventh place in the Bundesliga with 23 points from 15 matches. They have won six, drawn five, and lost four matches this season. They have been unbeaten in their last nine matches. They have won the last four matches and are looking good. They have managed to score goals and defend well. They have scored 19 goals in their last eight matches, conceding just eight. They have scored 24 goals this season, out of which 19 came in the last eight matches. We look at some stats to understand how Wolfsburg’s current form can give them a spot in the top four and qualify for the Champions League. 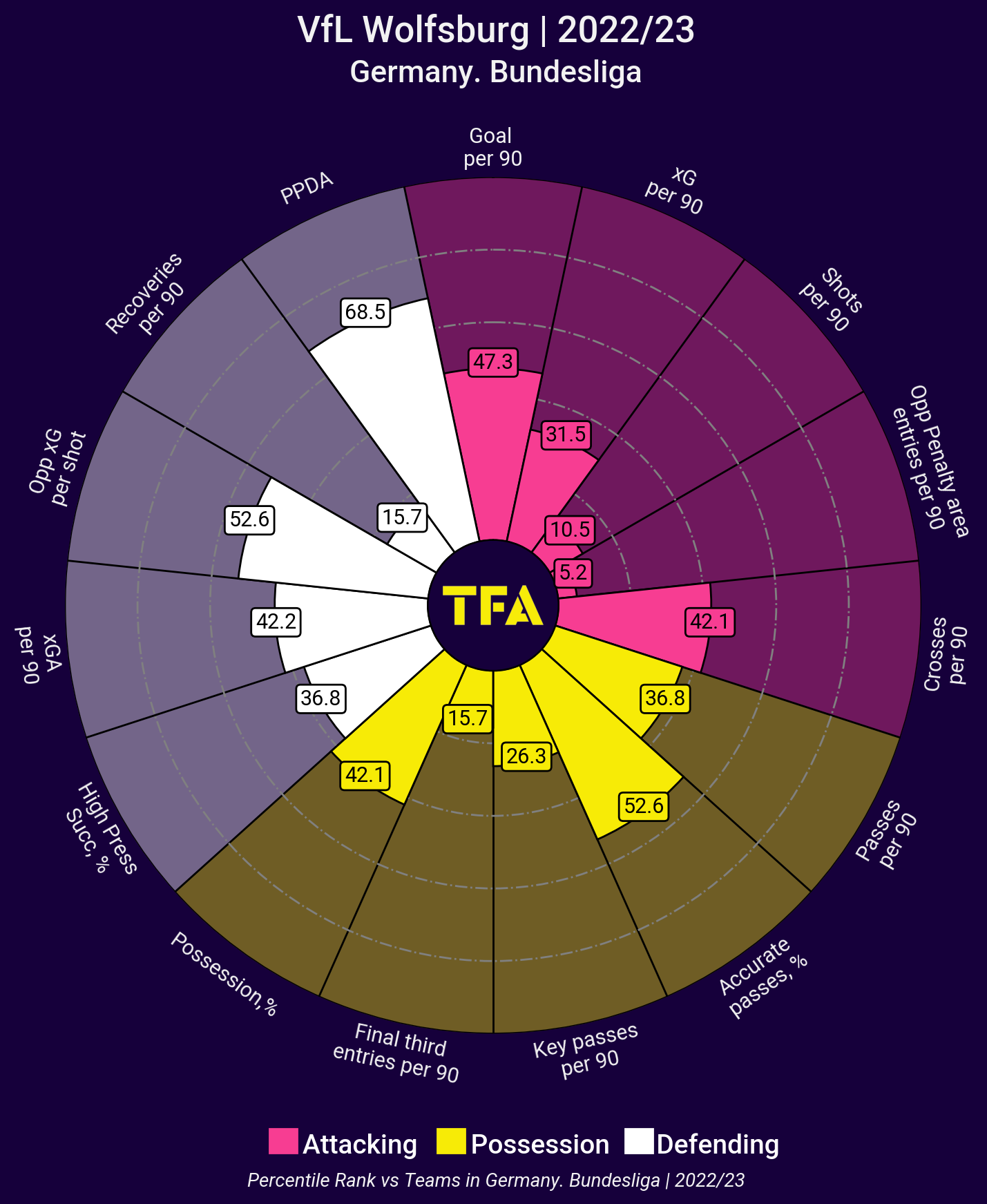 The above visual shows the percentile rank of VfL Wolfsburg compared to other teams in the Bundesliga. We can see from the visual that they have decent stats. They are ranked in the top 52.6 percentile for accurate passes, which is average. They are also ranked in the top 42.1 percentile for possession. Wolfsburg has a decent stat in goals per 90 minutes as well. They are not a team that deploys high pressure, as the pizza chart suggests. Wolfsburg also uses a lot of crosses in the box. But they are ranked very low in shots and entries into the opposition’s penalty area per 90 minutes. 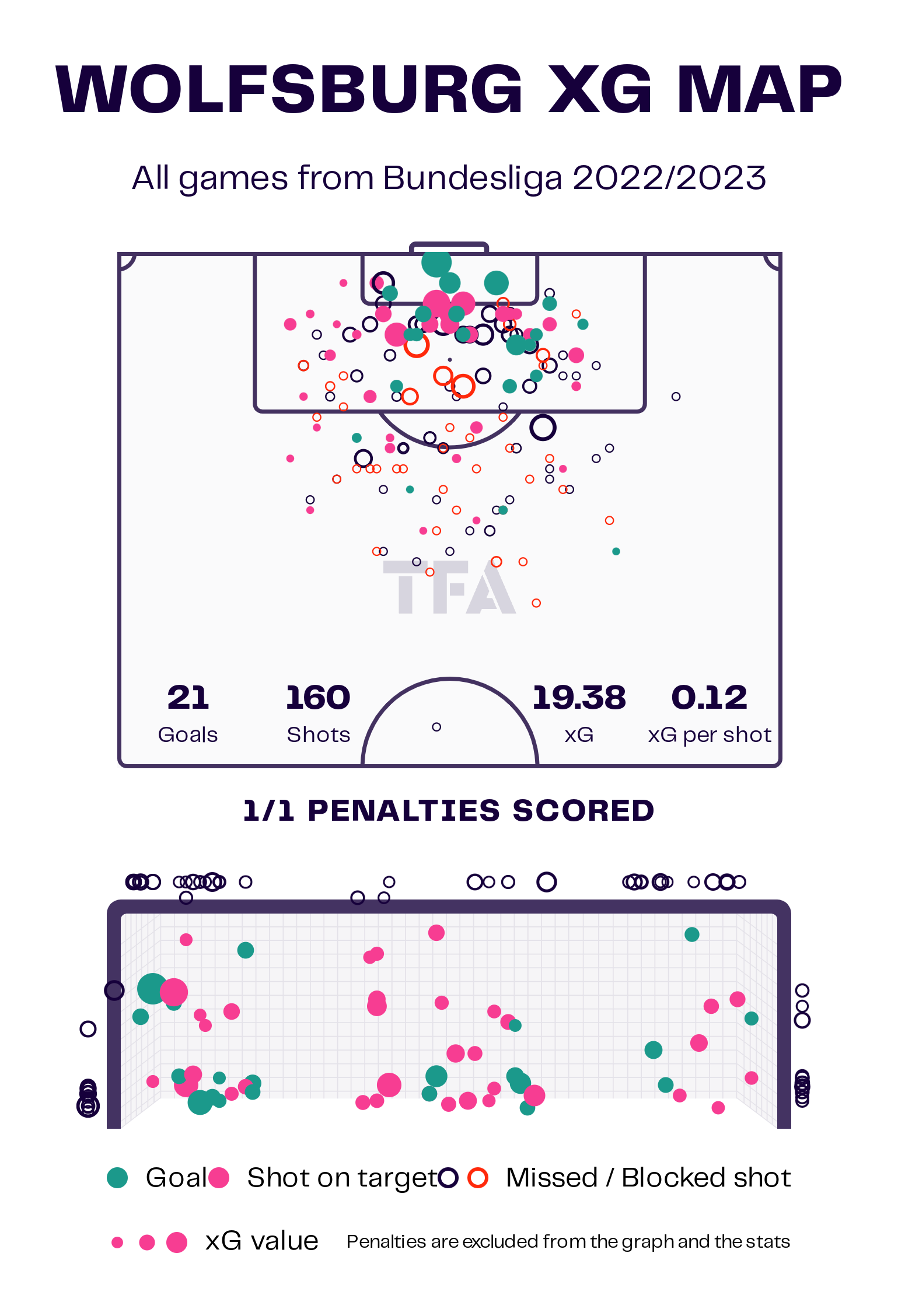 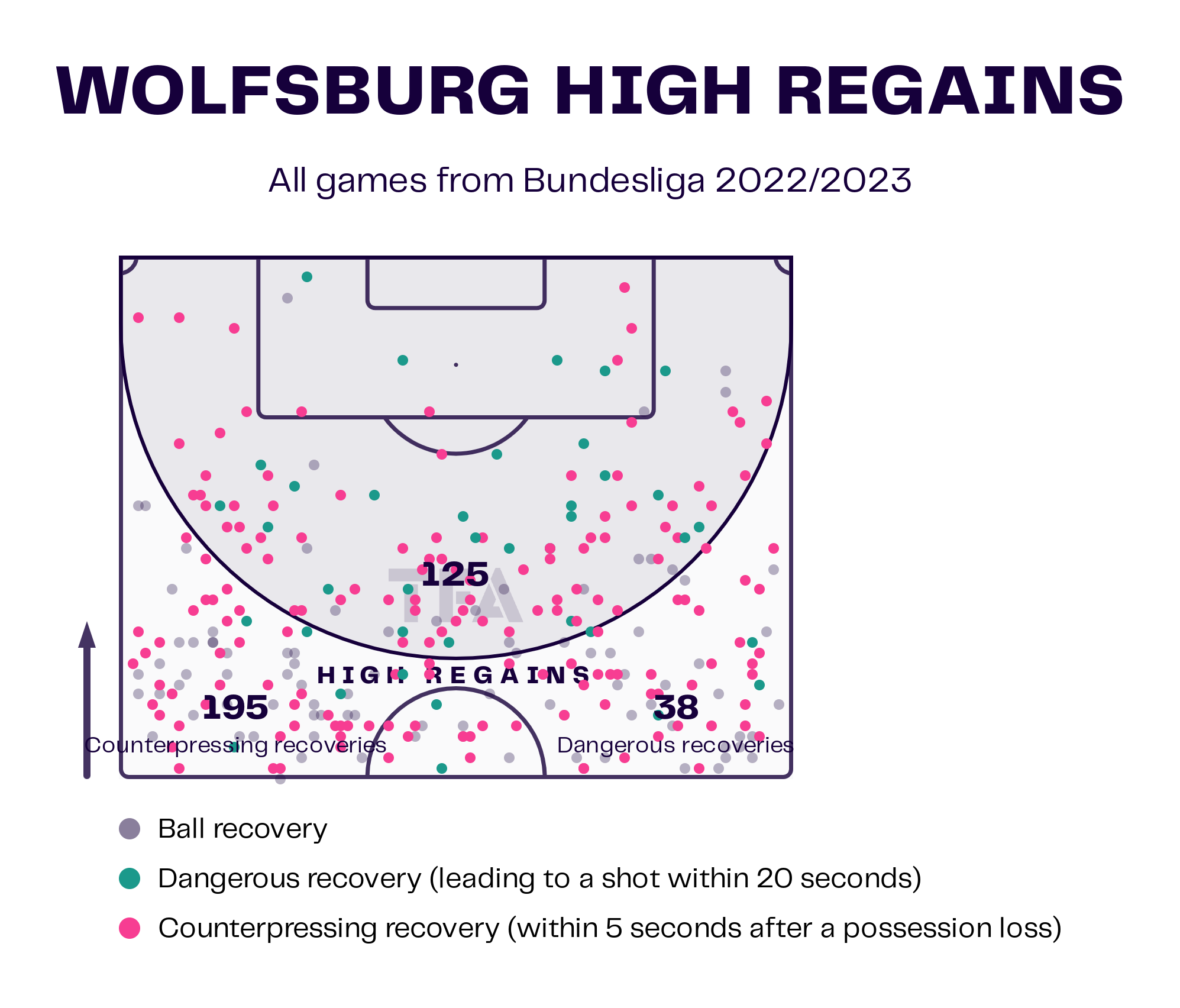 Even though they are not highly ranked in high pressing, they manage to recover possession a lot in the attacking half. This season, apart from the 125 high regains, they have made 195 counter-pressing recoveries and 38 dangerous recoveries. They make an average of 82.4 recoveries per game. Wolfsburg have scored after recovering possession in dangerous areas. 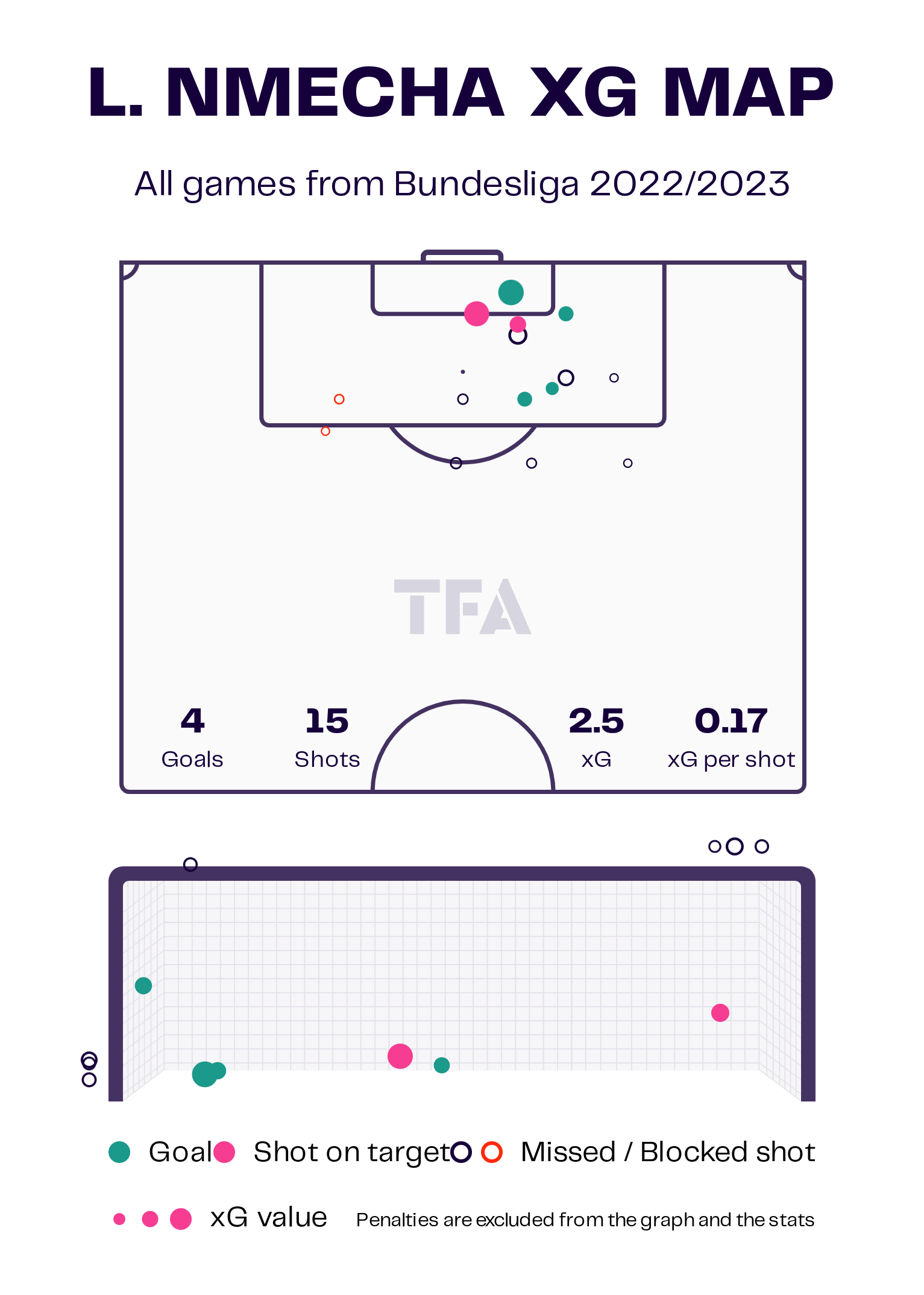 Lukas Nmecha is Wolfsburg’s top scorer this season with four goals. The 24-year-old is an important part of the team and provides a great threat with his speed, incisive movements, and scoring abilities. Nmecha has attempted a total of 15 shots this season, with six on target. He has a shooting accuracy of 40% and has exceeded his xG rate of 2.5. 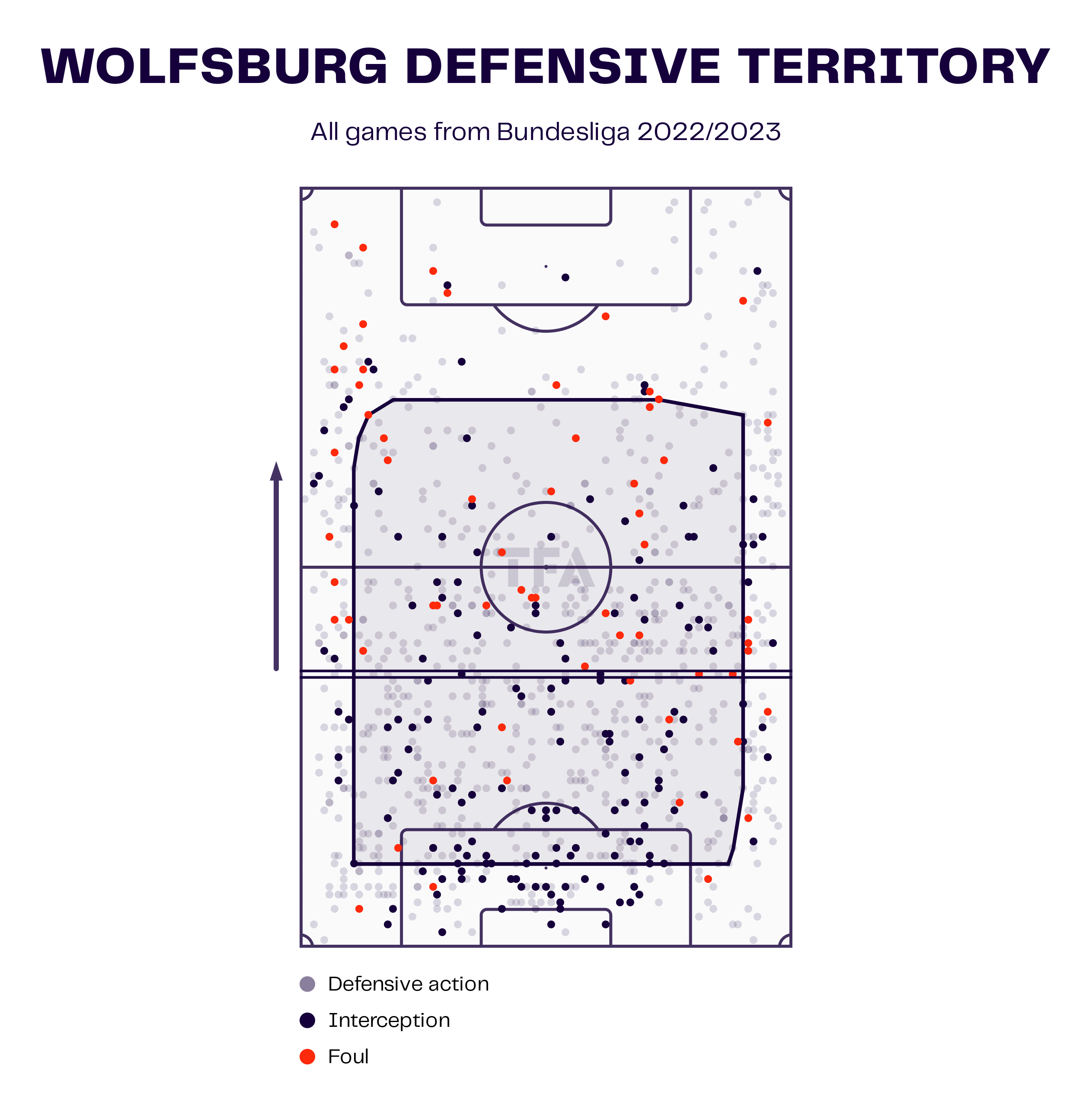 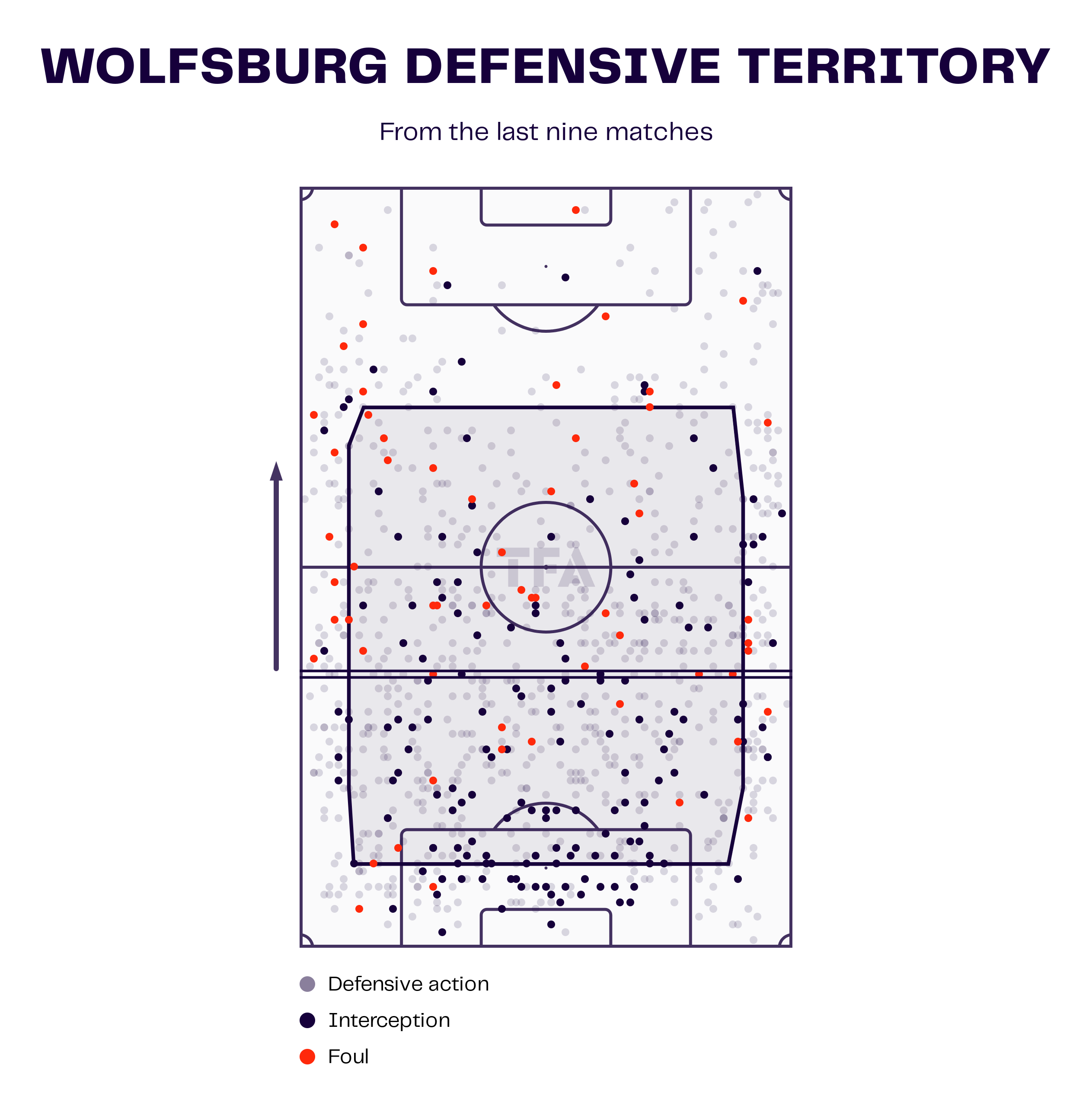 Wolfsburg have conceded 20 goals this season. They have been unbeaten in the last nine matches, and the second visual shows their defensive territory from the last nine matches. The first visual shows their defensive territory throughout the whole season. They have made an average of 62.8 defensive duels per game with a success rate of 60.5% and an average of 38.27 aerial duels with a success rate of 51%. Moreover, they make an average of 45 interceptions per game.

The second visual shows Wolfsburg’s defensive territory in the last nine matches. They have only conceded eight goals and have been incredible as a defensive unit. As we can see from the visual, they have made some crucial interceptions at important places in the field and have been brilliant. Their defensive discipline has helped them achieve an unbeaten streak of nine matches. In these matches, they have made an average of 47 interceptions per game, compared to 45 otherwise. The defensive duels in these matches have seen a negligible drop to 62.7 defensive duels per game. The aerial duels, though, have risen from 38.27 to 39.87 duels per game. 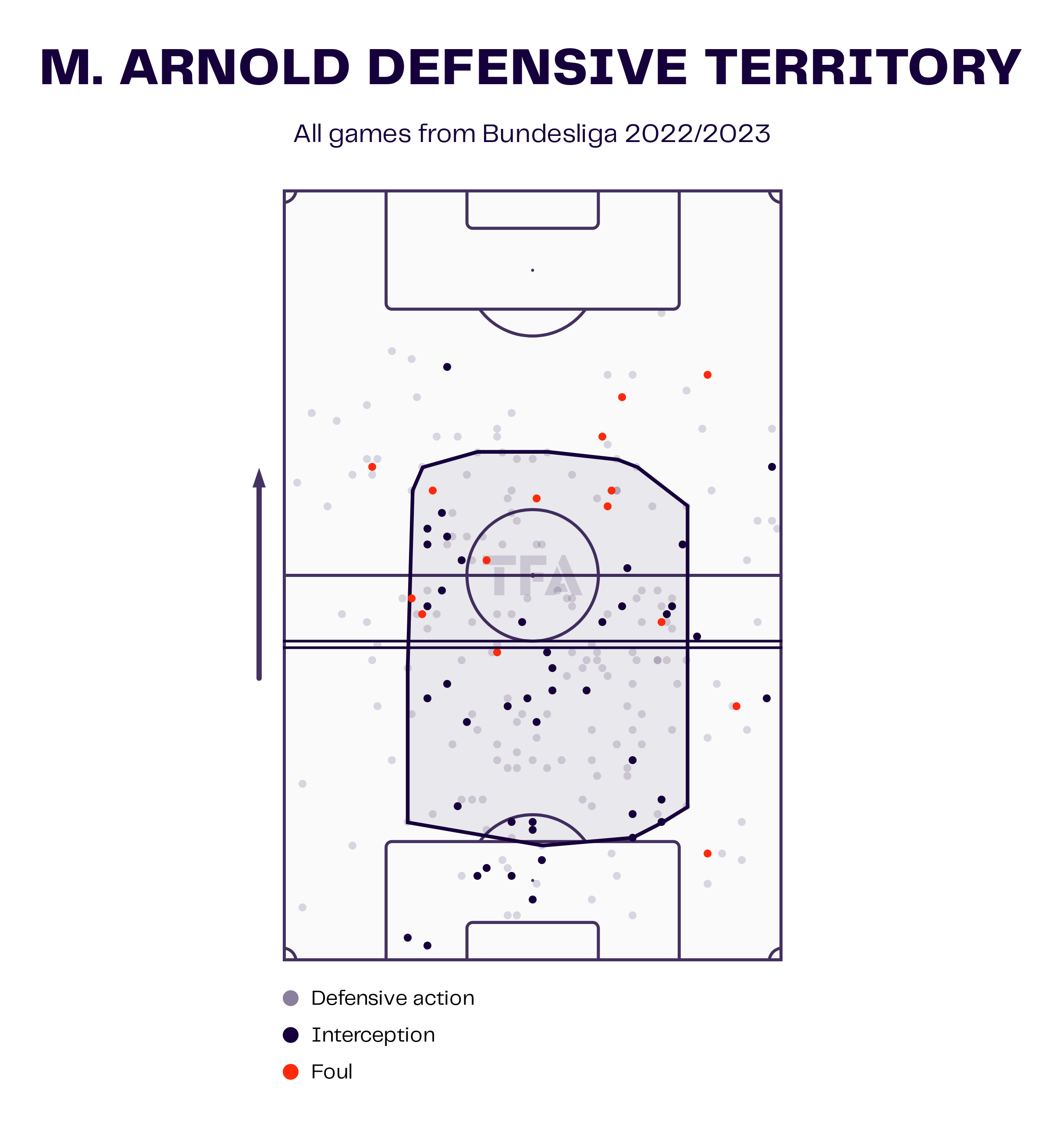 One of the most important figures for VfL Wolfsburg is Maximilian Arnold. The 28-year-old German footballer has been a rock on the backline for the Wolves. Playing as a centre-back, he has made more than 88 interceptions this season, the most by any Wolfsburg player. His role in the back is of great value to the team. Arnold is also capable of contributing to the attacking play with his precise crosses and free-kicks.

Overall, Wolfsburg is in brilliant form and is enjoying an unbeaten streak of nine matches. They have also scored 19 goals in their last eight matches. Their defence unit has also stepped up to the task and has been solid. Their coach, Niko Kovac, will be hoping his players can keep up their form when the season resumes in January.

Analytics: Netherlands on top against Austria in the Euro 2021 group...