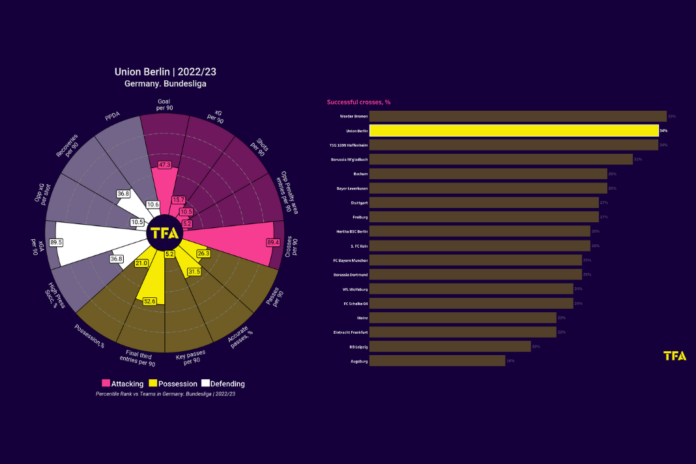 Everyone loves the story of an underdog who goes on to achieve big things. From being a second-division club to ascendency in European football, Union Berlin’s story is no different. The journey of the club from East Berlin from small-club status to the top of the Bundesliga is worth writing about. They now sit in the fifth position with 27 points from 15 matches. Apart from a slump in form in recent matches, they have been brilliant this season with a unique playing style and fantastic fan support. Union Berlin have eight wins, four losses, and three draws. They have scored 24 goals this season and conceded 20. Manager Urs Fischer has truly changed the club’s fortune in his tenure. We look at some stats to understand Union Berlin’s rise in the Bundesliga. 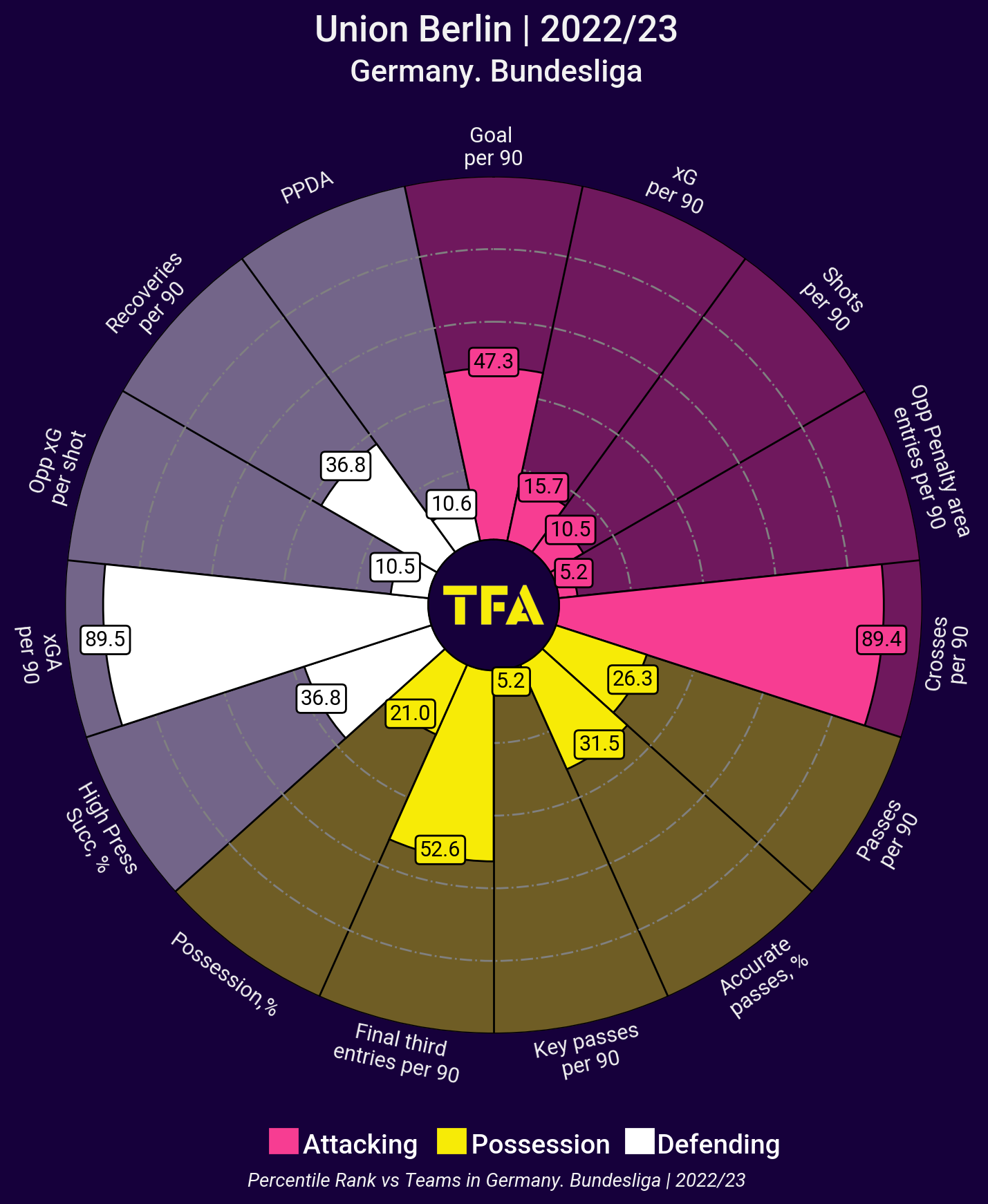 The above visual shows the percentile rank of Union Berlin compared to other teams in the Bundesliga. As we can observe from the visuals, they do not have the best percentile rank in all aspects as a top team has, but they stick to their game plan, and that has worked out well for them. They are a team that likes to play a lot of crosses into the box, as we can observe from the visuals. Union Berlin are ranked in the top 89.4 percentile for crosses per 90 minutes. They are also decent when it comes to final third entries per 90 minutes, for which they are ranked in the top 52.6 percentile. This pizza chart shows the unconventional method that Union Berlin follows, which has proved efficient for them. 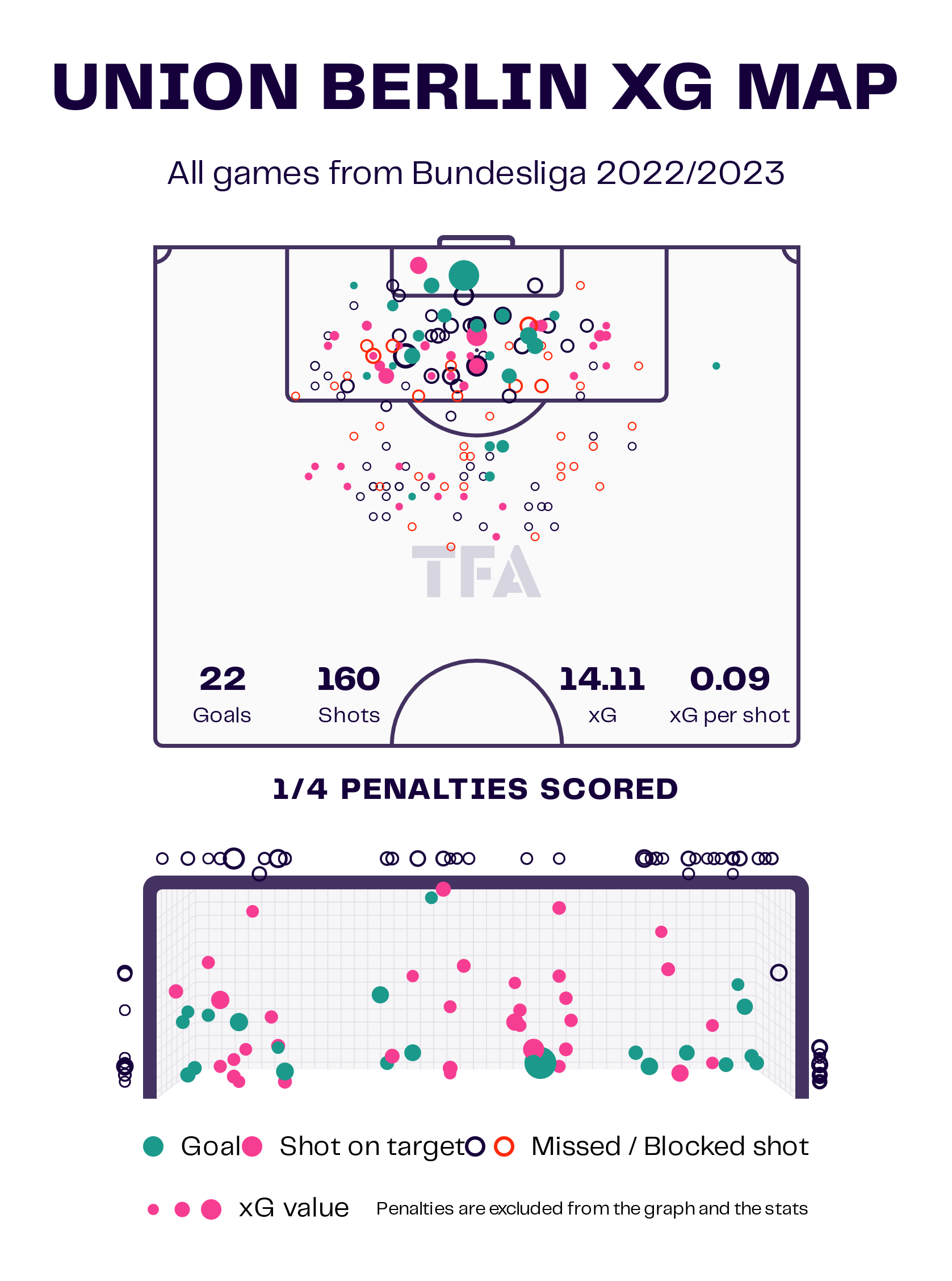 Union Berlin have scored 24 goals this season, with just one coming from a spot kick and the rest from open play. They have attempted 160 shots this season with an average of 10.93 shots per game. They have a shooting accuracy of 36.6% and score an average of 1.6 goals per game. We can observe from the visual that most of the goals were scored from inside the penalty box.

Crosses into the box 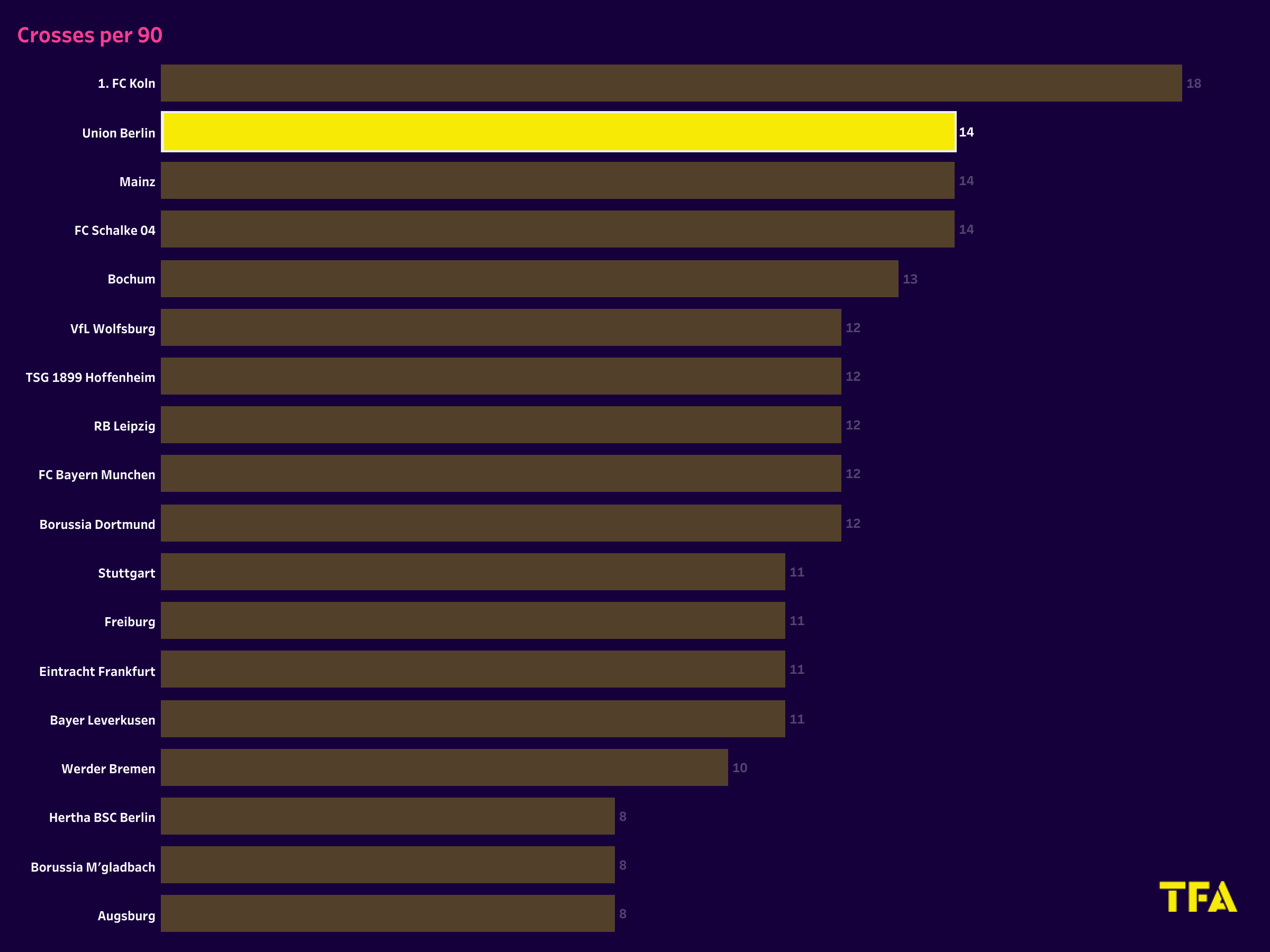 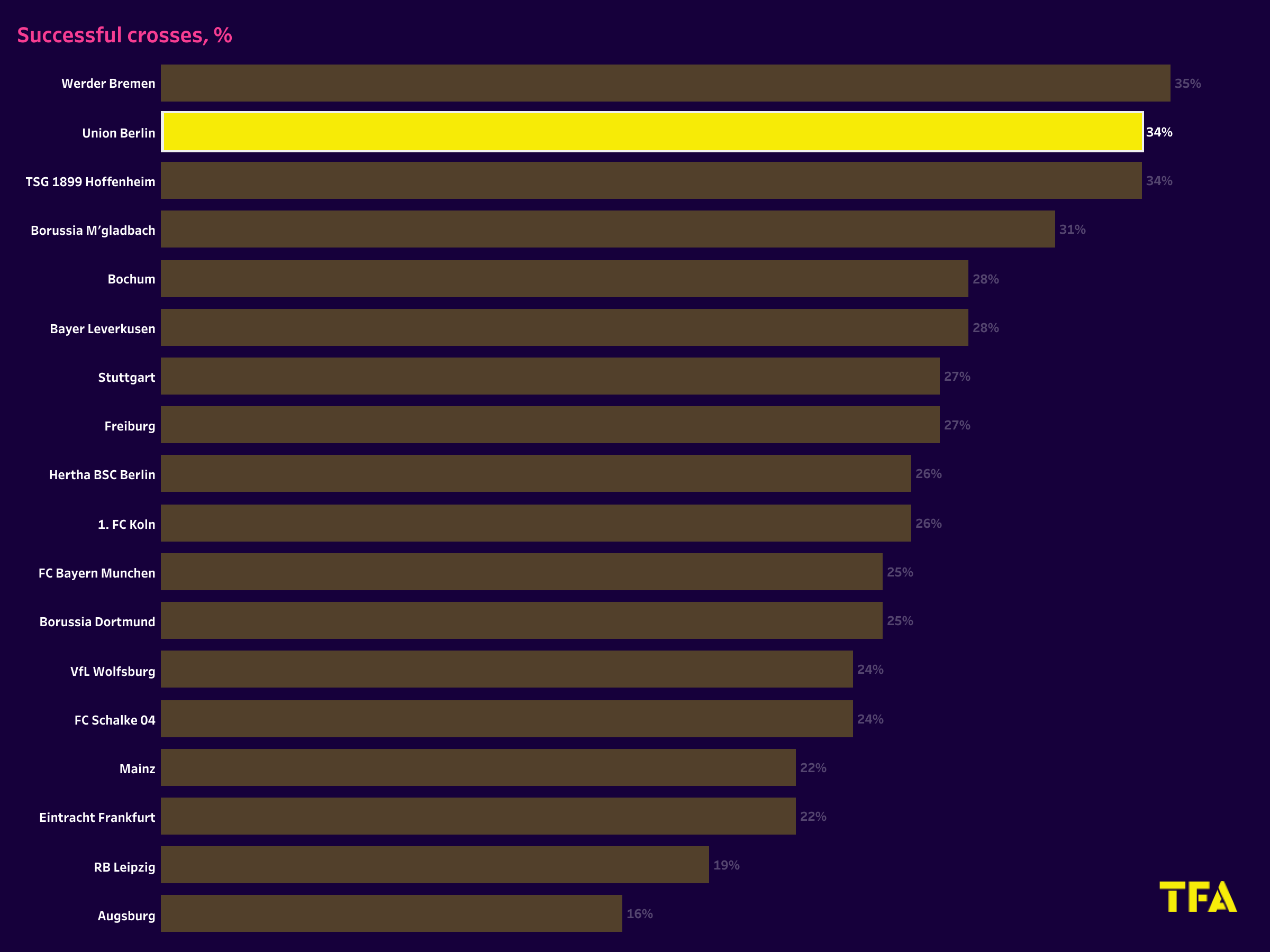 Union Berlin have gone old-school in attack, playing a lot of crosses into the box and depending on their tall forwards to convert those chances into goals. As the two visuals above suggest, Union have made the second-most crosses per game this season and have the second-best success rate for the crosses as well. They average 15.47 crosses per game with a success rate of 40.9%. Crosses have been the main source of goals and attacks for Union Berlin. 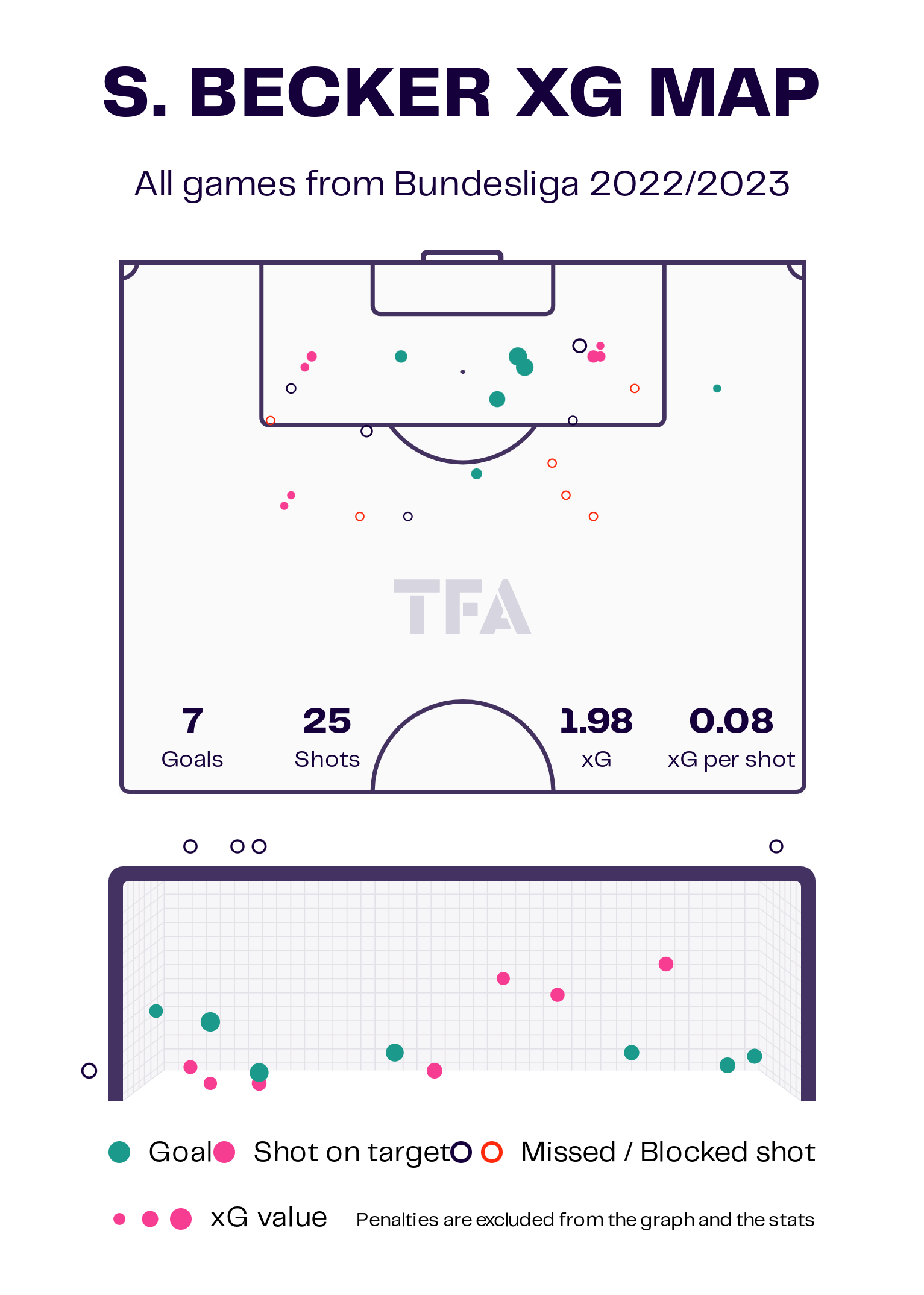 Sheraldo Becker is Union Berlin’s top scorer this season with seven goals in the Bundesliga. He has attempted 25 shots, with 14 of them on target. The forward is a dominant presence in front of the goal and can score all types of goals. He is the main focal point of many of Union Berlin’s crosses. 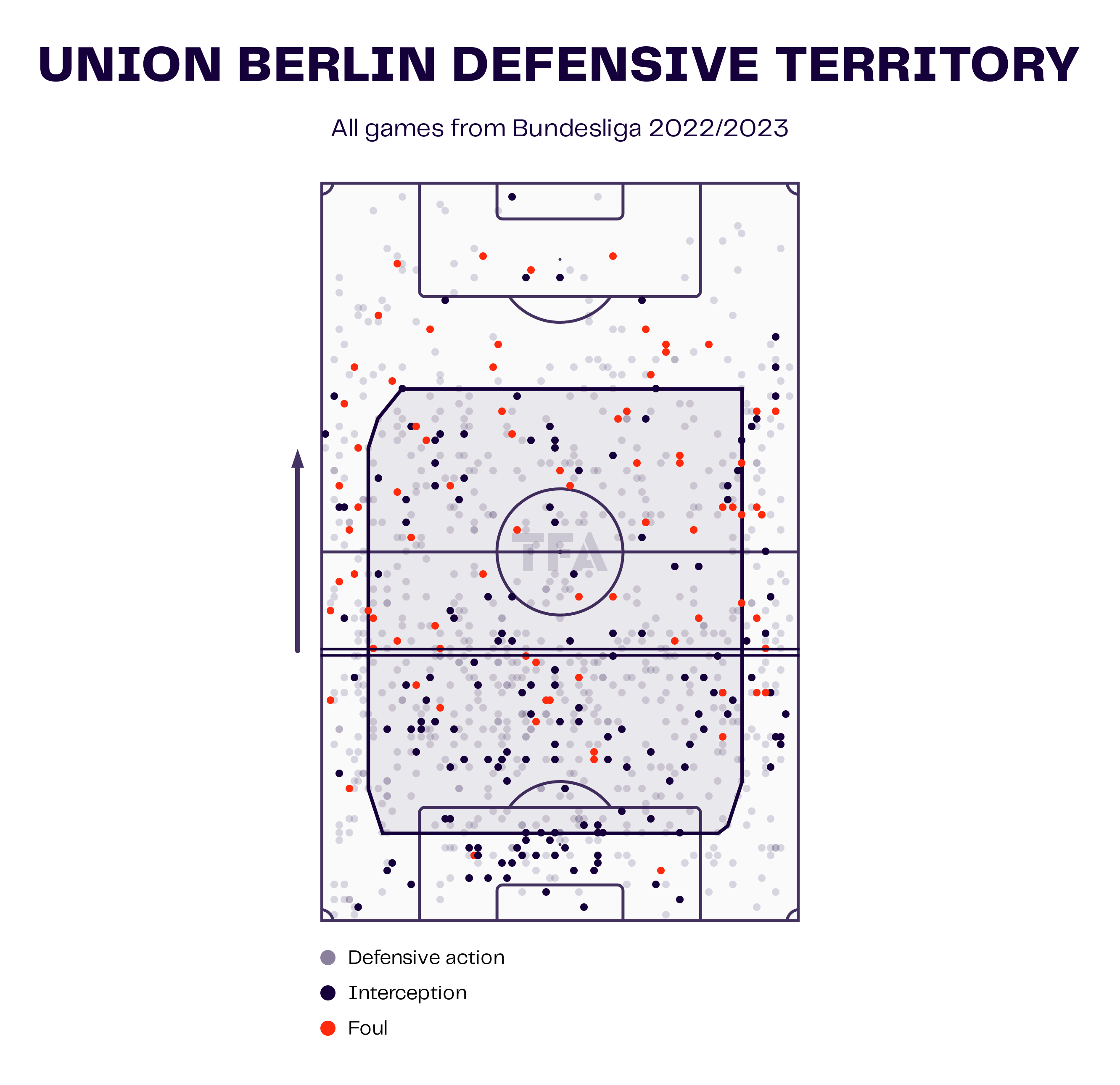 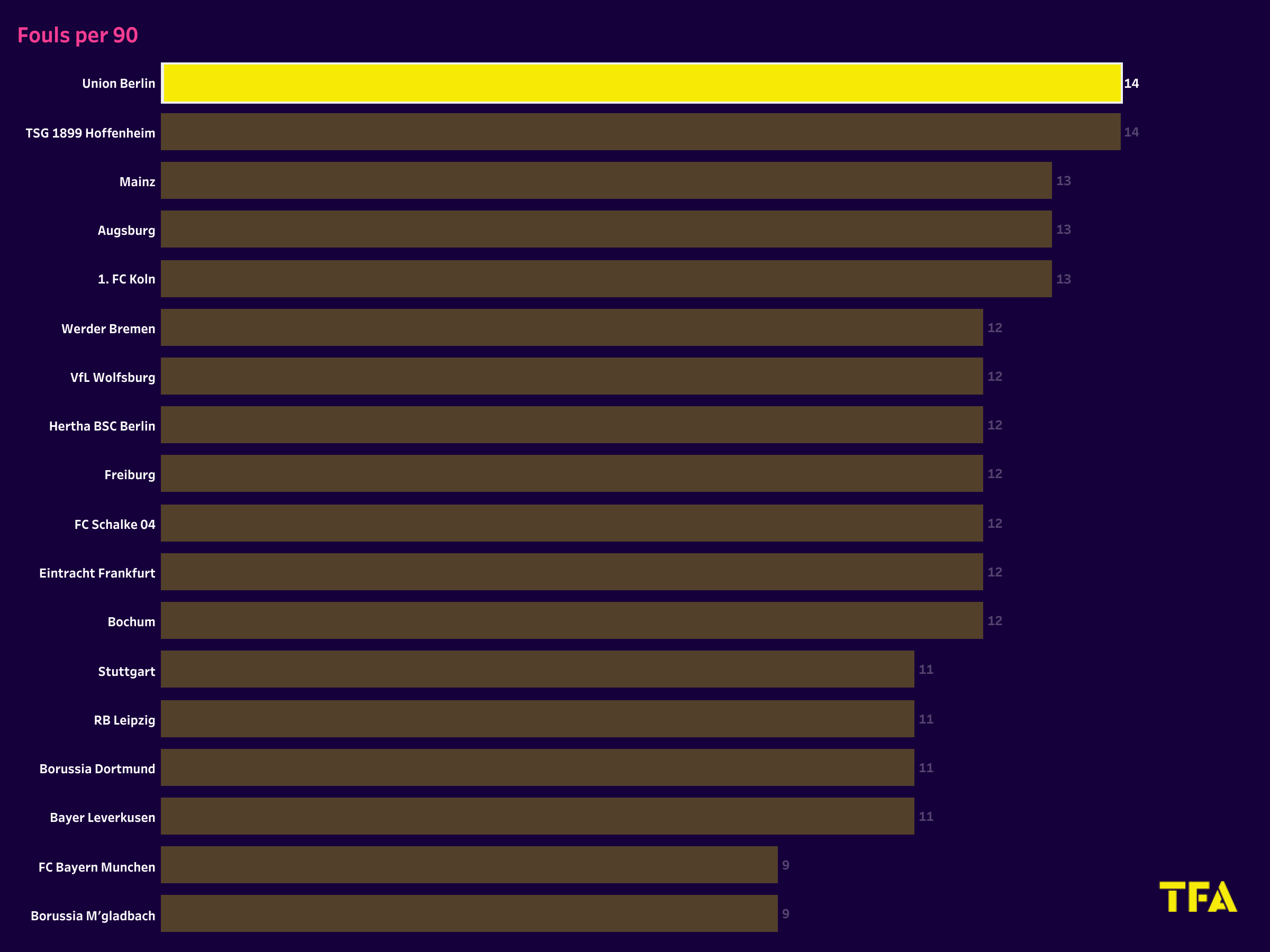 The two visuals above, when read together, tell us an interesting story. The first visual shows Union Berlin’s defensive territory. We can observe that they make a lot of interceptions in the centre of the field, which stops the opposition’s attacks. They make around 40.93 interceptions per game. They have made many interceptions in crucial areas. If we come to the second visual, we can see that Union Berlin commits the most fouls per game in the Bundesliga. Combining this information with the first visual, we can observe that they commit most of the fouls in the middle and attacking third, where the danger is less. Union Berlin resorts to committing tactical fouls to stop the opposition’s attack. 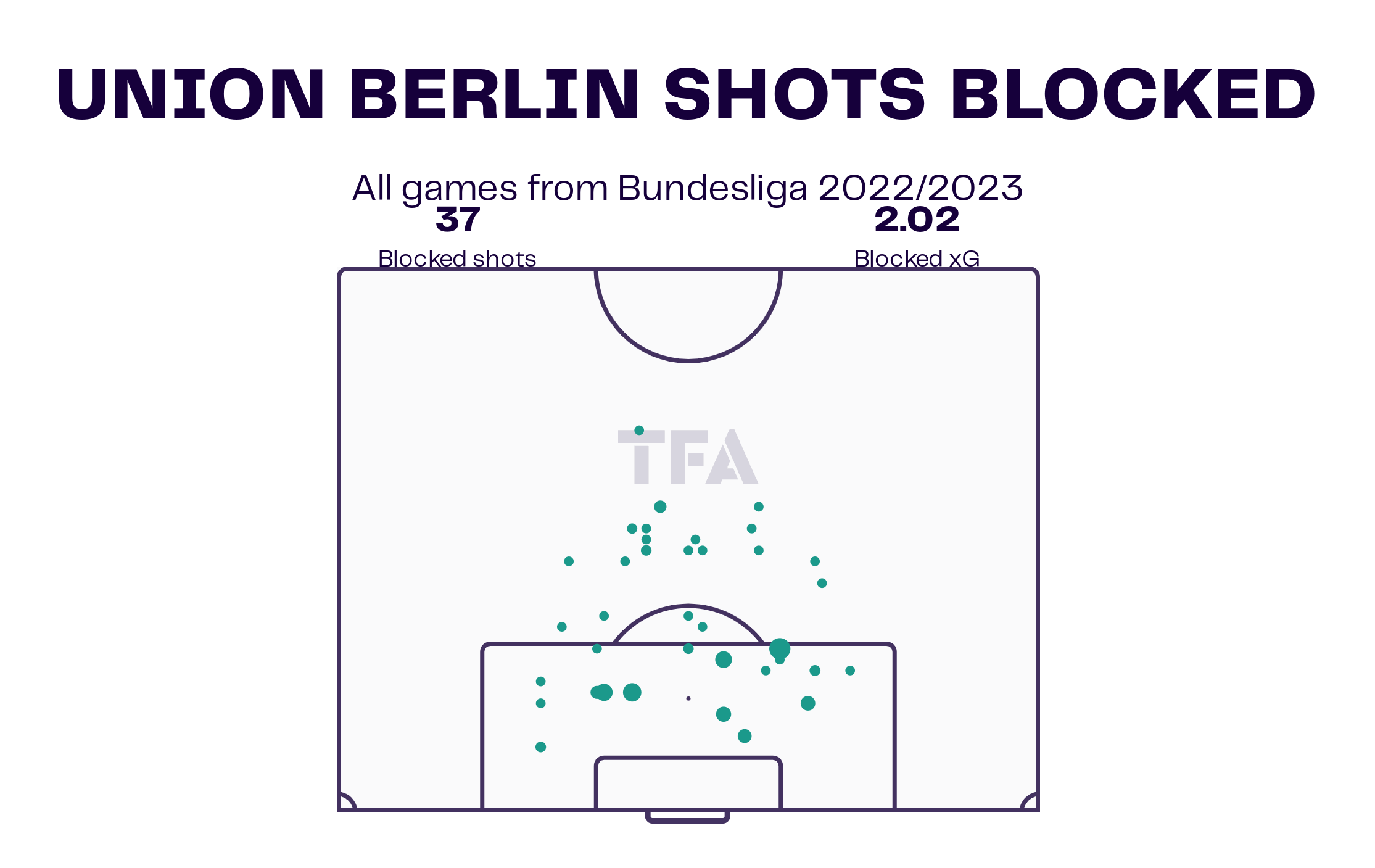 The above visual shows the shots blocked by Union Berlin in the Bundesliga. This season, they have blocked 37 shots and allowed only nine goals in their first 12 games. They have made an average of 17.87 clearances per game and are closely knit as a defensive unit. 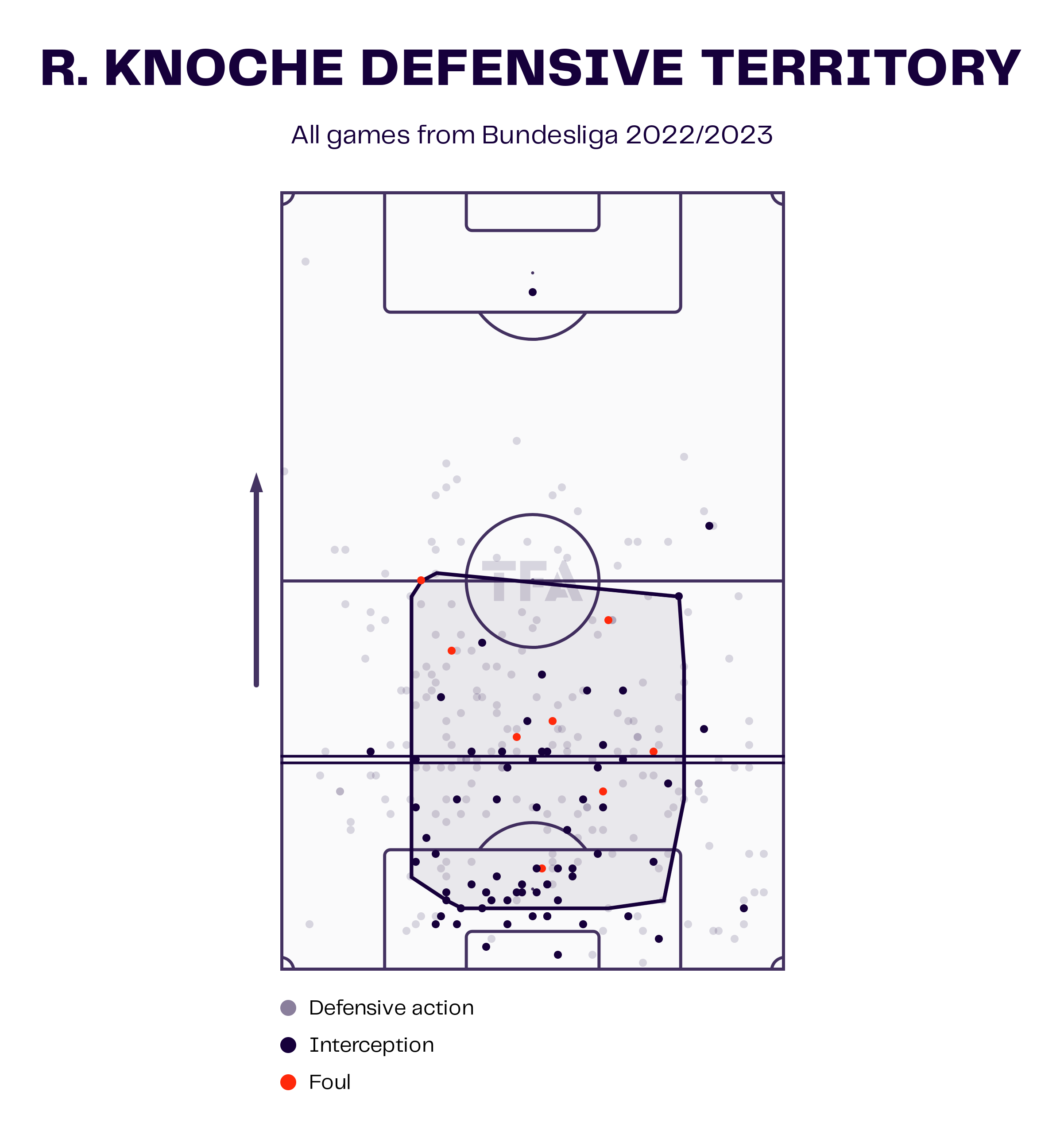 Union Berlin’s rise to the Bundesliga’s top positions in the table has been an interesting story. Union has proven that efficiency matters more than anything else in football by employing an unconventional playstyle that isn’t as appealing as other styles.

Stats Pack: England on top against Czechia in the Euro 2021...

“Too soon” – Steve McManaman advices Haaland to stay in Dortmund...

Havertz likely to sign for clubs other than Bundesliga

Building a team of Bundesliga players that could challenge Bayern Munich...