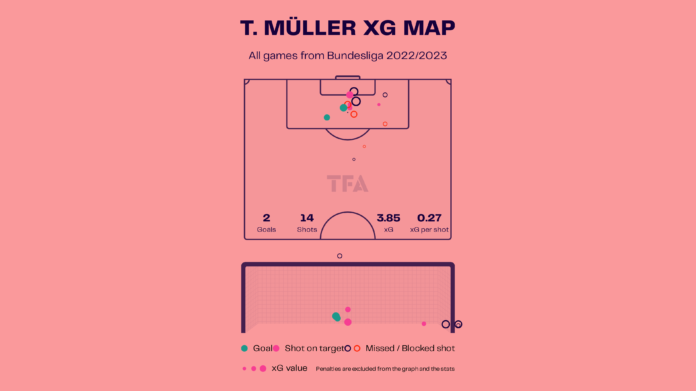 One name that has stayed consistent throughout Bayern Munich’s success in the last decade is Thomas Muller. The 33-year-old is an extremely important figure for Bayern and has won everything at the club level. He recently retired from international football after Germany’s shock exit from the World Cup.

Muller, uncharacteristically, is having a lean patch, and it is beginning to hurt Bayern Munich. Usually a regular figure in terms of goals and assists for Bayern, Muller has found it hard to do both this season and has only two goals and three assists in the Bundesliga. The absence of Lewandowski has meant that Muller usually occupies the role of a striker. But the fast system of Nagelsmann would want Muller in the box at the right time, and with age catching up, he has not been able to do that very often. Also, playing with his back to the opponent’s goal has taken away some of the creative sides of Muller’s play. We look at some stats to understand how his dip in form has affected Bayern Munich. 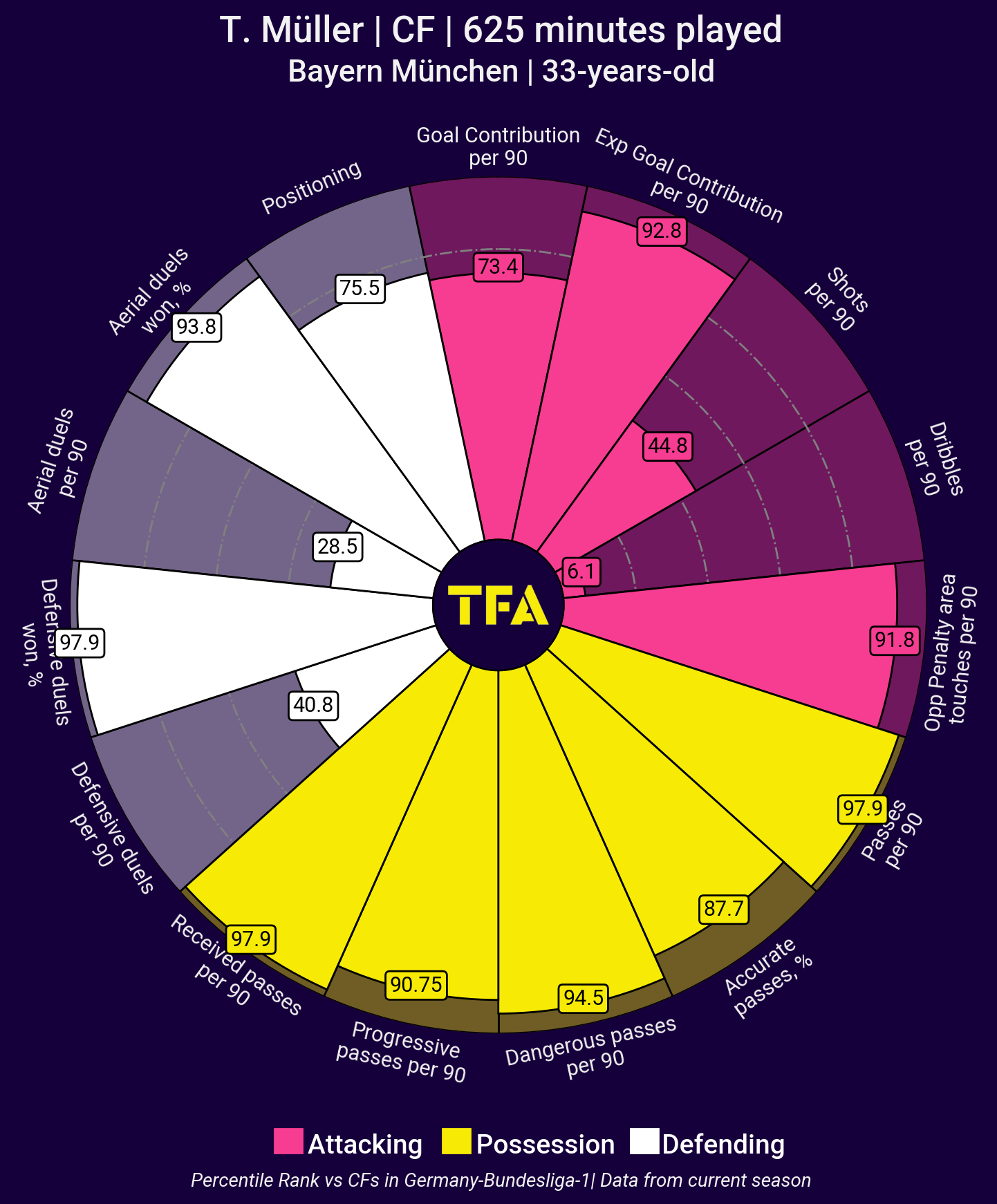 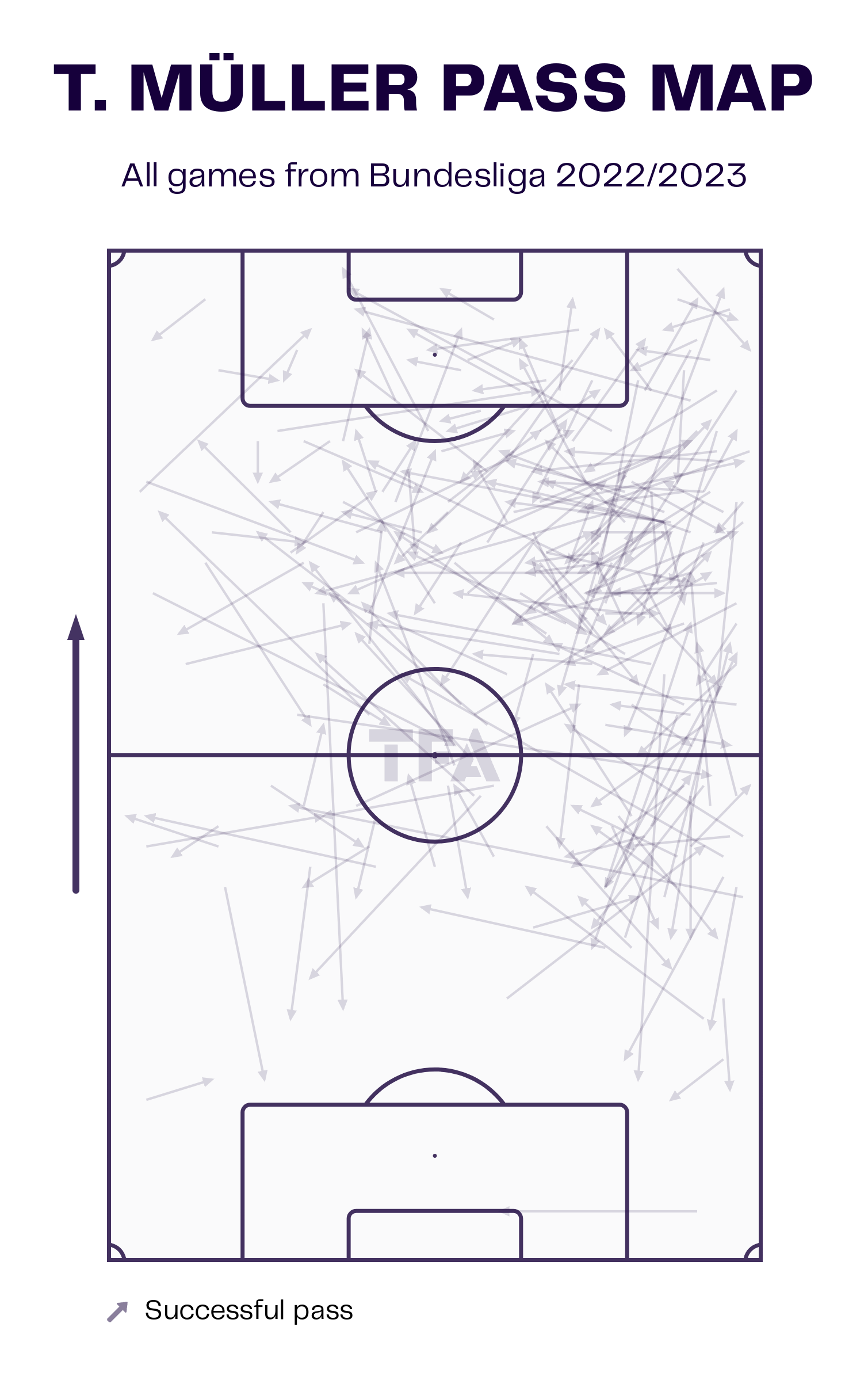 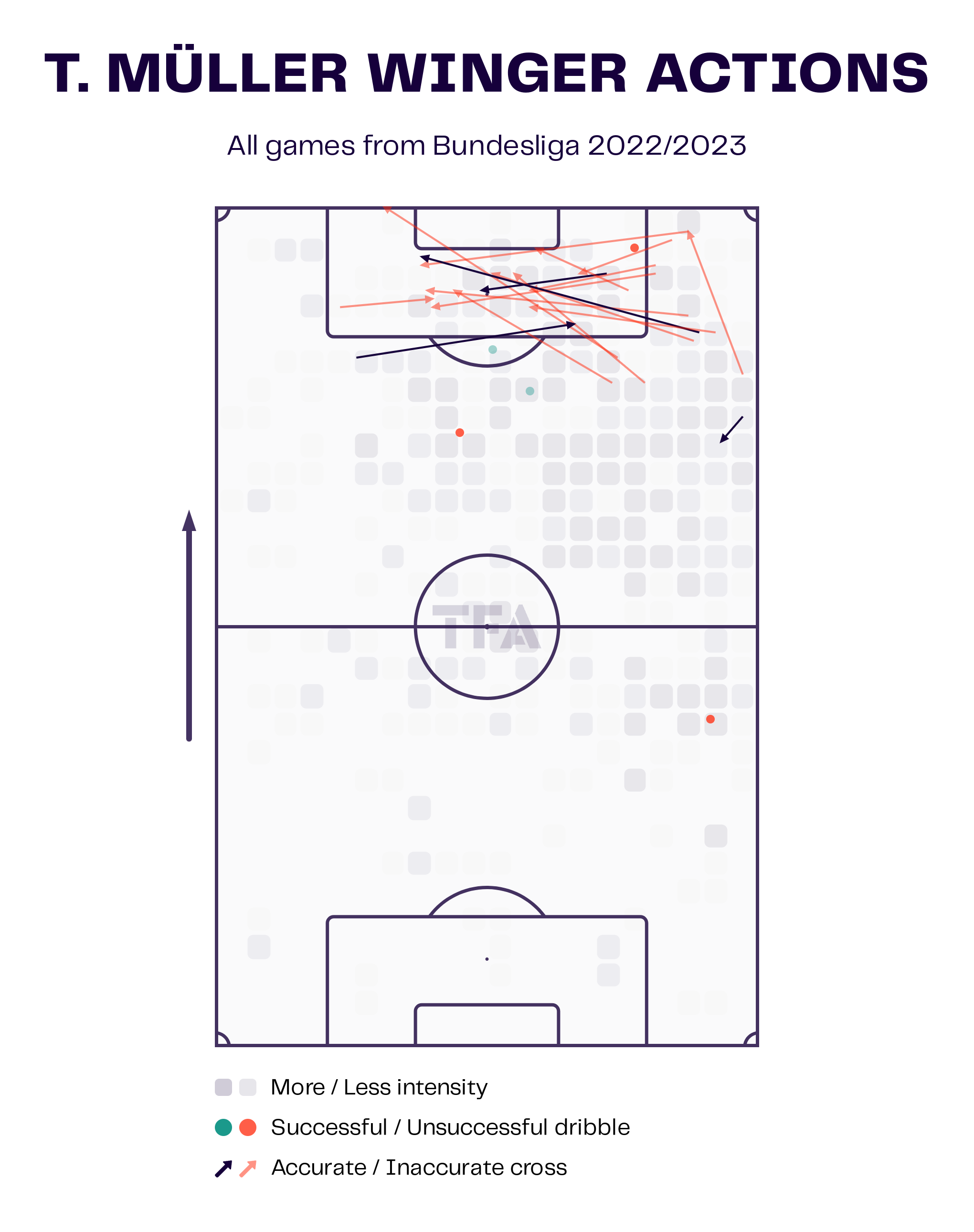 Muller can also play as a winger or as a wide-attacking midfielder. Even though he is not the best at taking players on 1v1, he can provide some good crosses into the box. These crosses were of great value when the figure of Robert Lewandowski was there in the penalty area. But since his departure, Bayern are yet to find a player who is as dominant as Lewandowski. Therefore, Muller’s crosses are not met with the same effect. Nevertheless, Muller plays around 3.17 crosses per game with a success rate of 18.3%. This figure was 3.28 crosses with a 34.2% success rate last year. 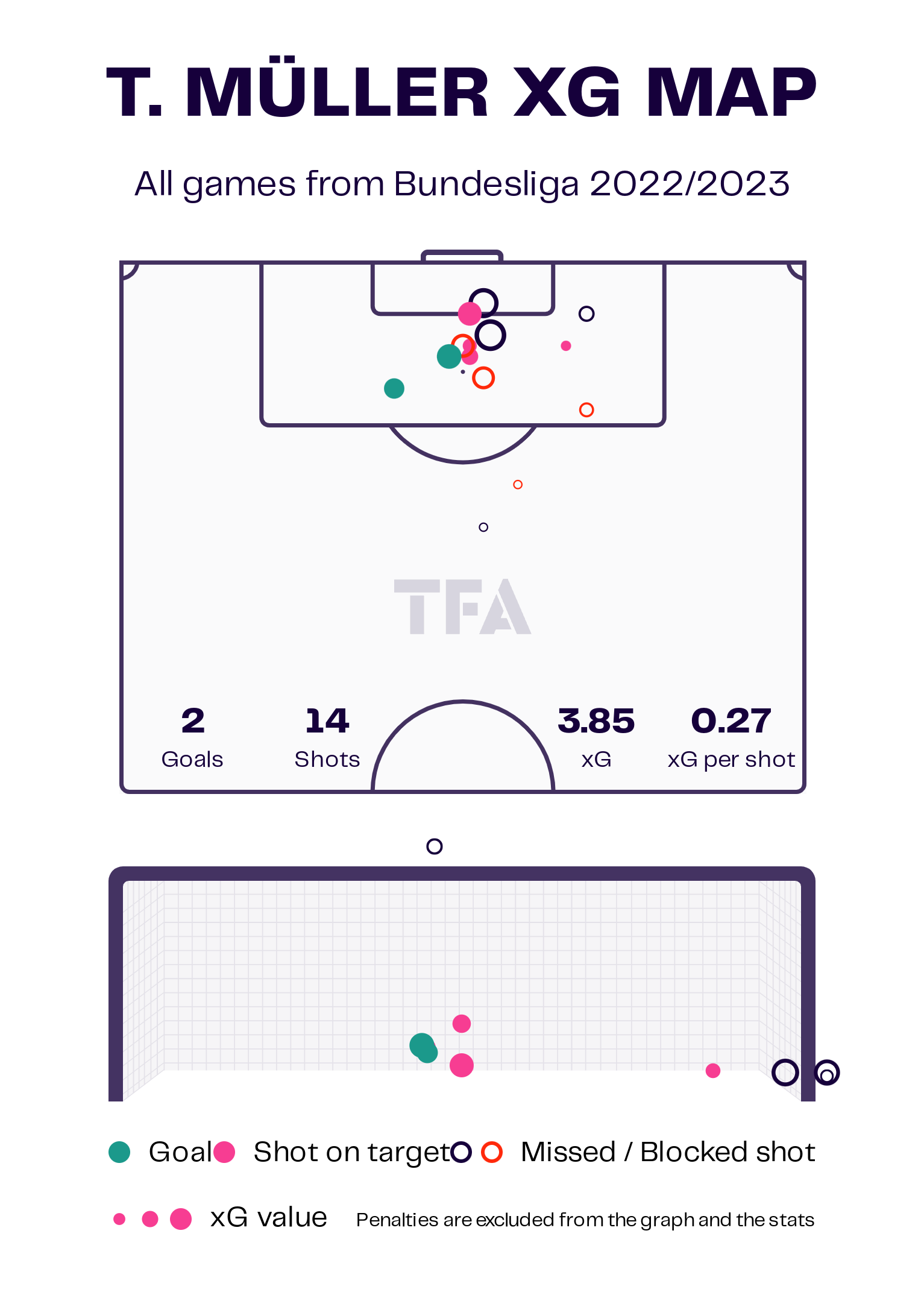 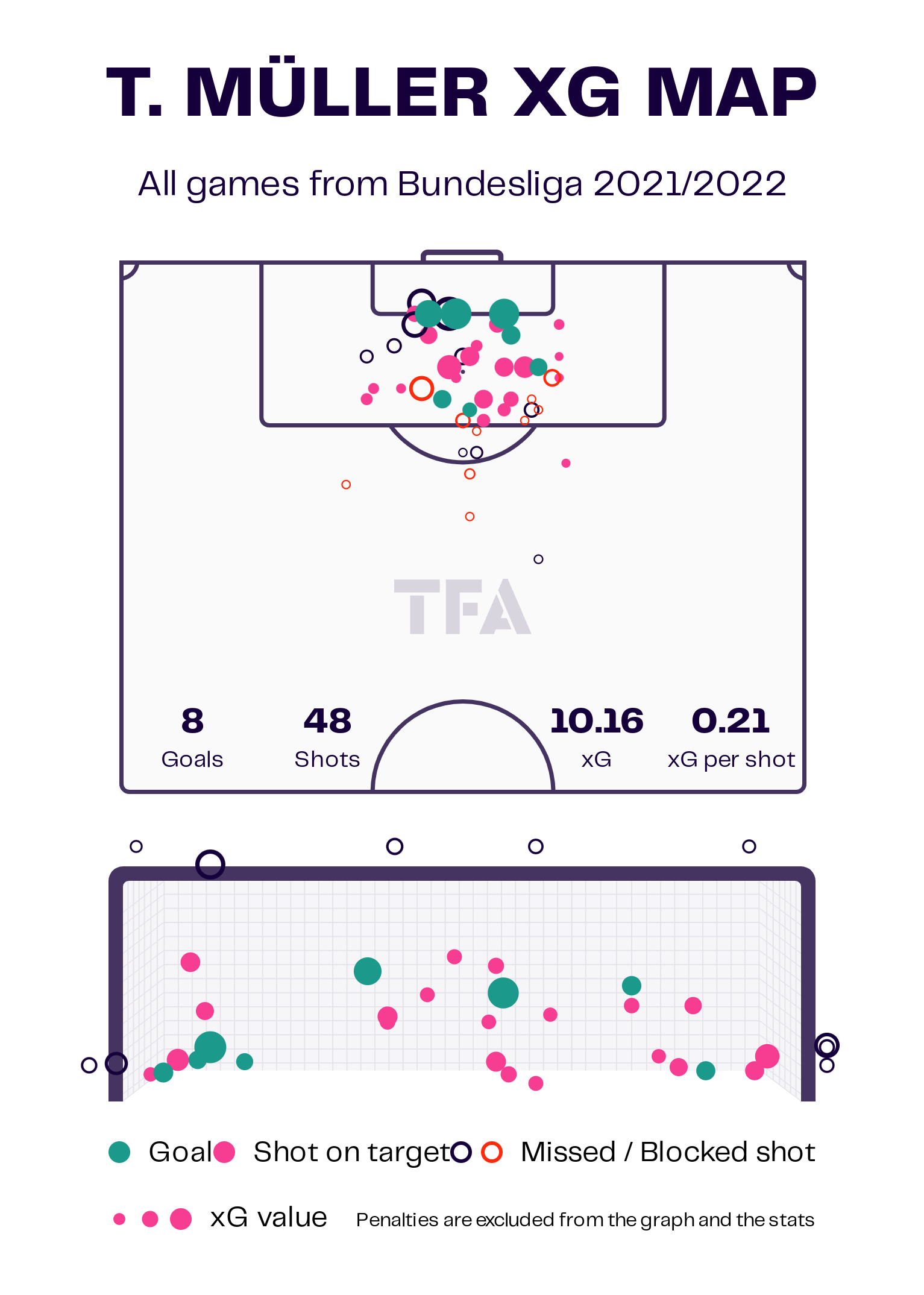 The two visuals above show the contrast between Muller’s goal-scoring from the previous season and the current season. Last year, Muller racked up a total of eight goals in the Bundesliga from 48 shots. On top of that, he had 18 assists. But this season, the figure has come down worryingly for Bayern, as he has scored just two goals and assisted three more. Last season, Muller averaged 1.61 shots per game with a 58% success rate. He also had an average of 5.22 touches in the penalty area, averaging 0.27 goals per game and 0.5 assists per game.

But this season, the outcome has not been the same. Even though Muller has a better average of goals per game (0.29), better shots per game (2.02), and more touches in the penalty box (5.9). Muller has played mainly as a centre-forward this season and therefore gets into the box more often. But his shooting accuracy has gone from 58% to 42.6%.

Why Fullkrug deserved to start for Germany in Muller’s place 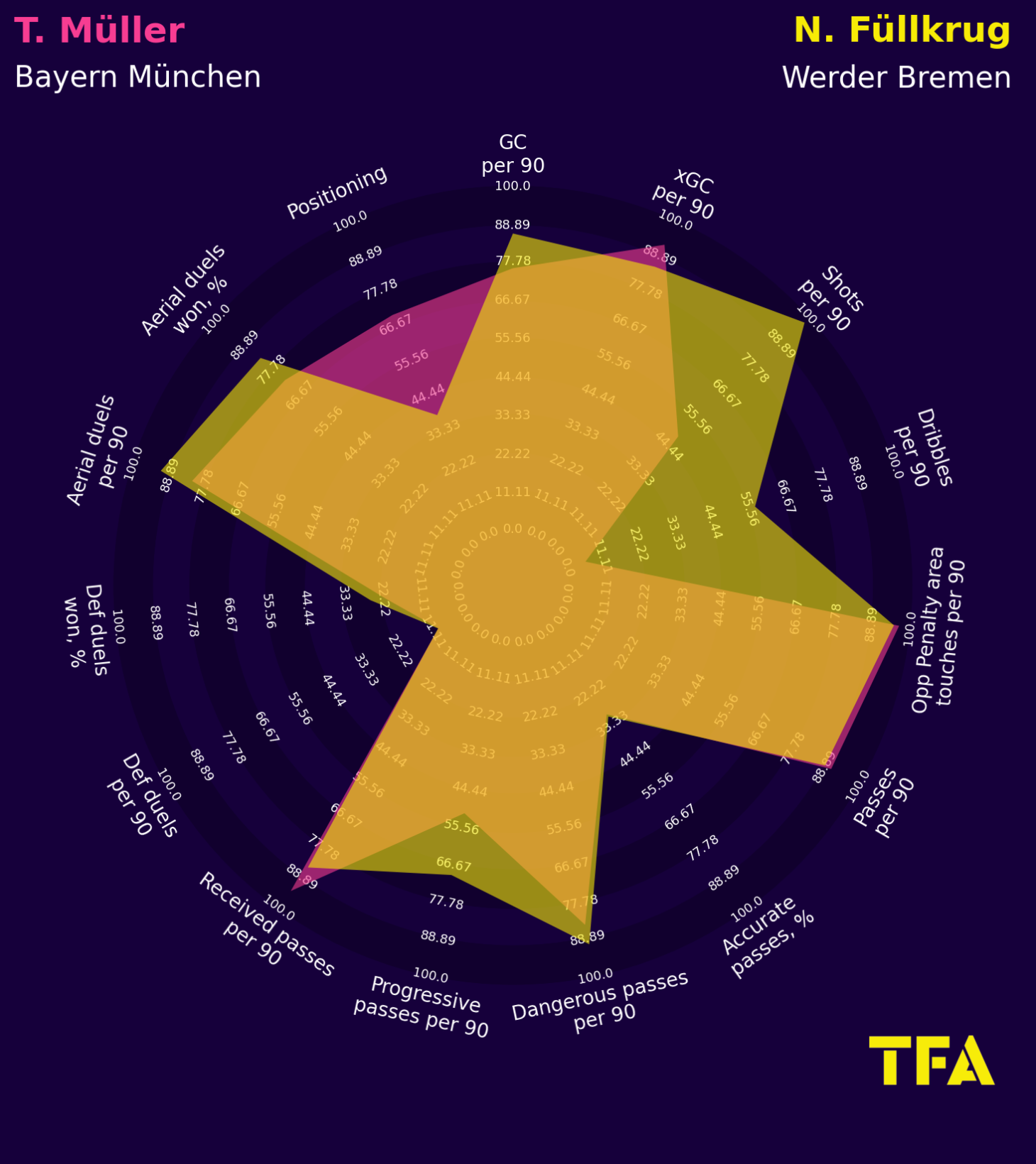 The above visual compares the radars of Thomas Muller and Niklas Fullkrug. The striker from Werder Bremen scored the important goal for Germany against Spain, while Muller was almost invisible throughout the time he played. Fullkrug has better stats in almost all areas barring passes received, positioning, and expected goal contributions. If Fullkrug played for 90 minutes, Germany might have had a different World Cup altogether.

A change in position to centre-forward has not worked out exactly how Muller would have wanted it to go. His involvement in the game has reduced significantly, and that affects the team as well. Even though the team is doing pretty well, Muller’s performance this season would be worrying for the Bundesliga champions.

Transfer Analysis: Would the USA star midfielder be a viable replacement...

Match Preview: Augsburg have no hope against Bayern Munich on Friday

Dortmund are ready with their plan