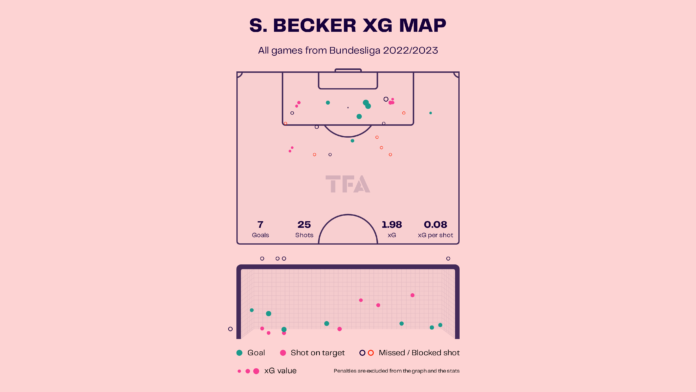 Union Berlin has finished the first half of the current Bundesliga season in fifth place. One of the architects behind their success is the 27-year-old Sheraldo Becker.

Becker, who joined Union Berlin four seasons ago, is having the best season of his career. He has racked up seven goals and three assists in the Bundesliga and has helped his team incredibly. His contributions have been crucial for Union Berlin, scoring some important goals. Therefore, we look at some of his stats to understand Surinamese International’s contributions to Union Berlin’s success this season. 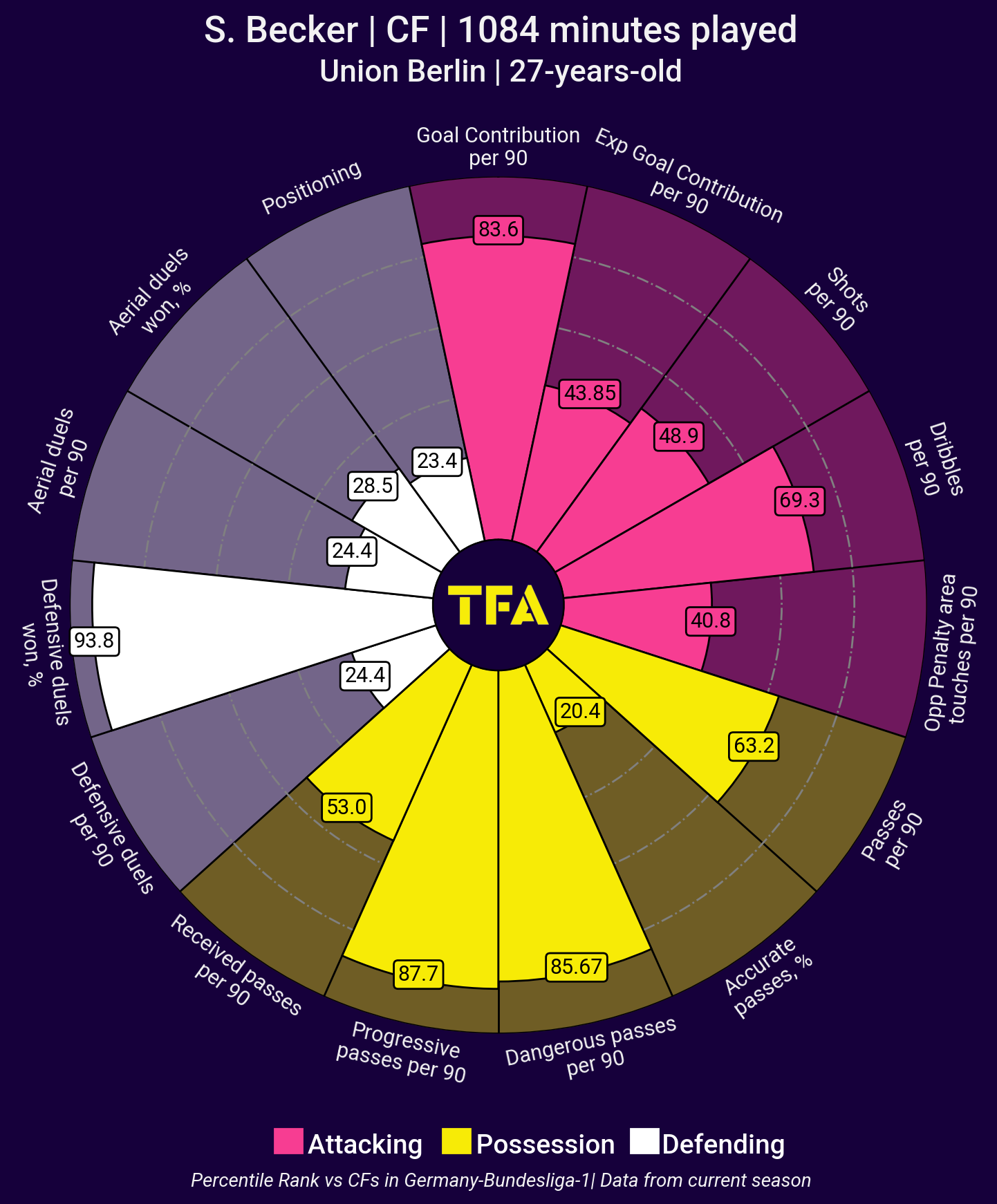 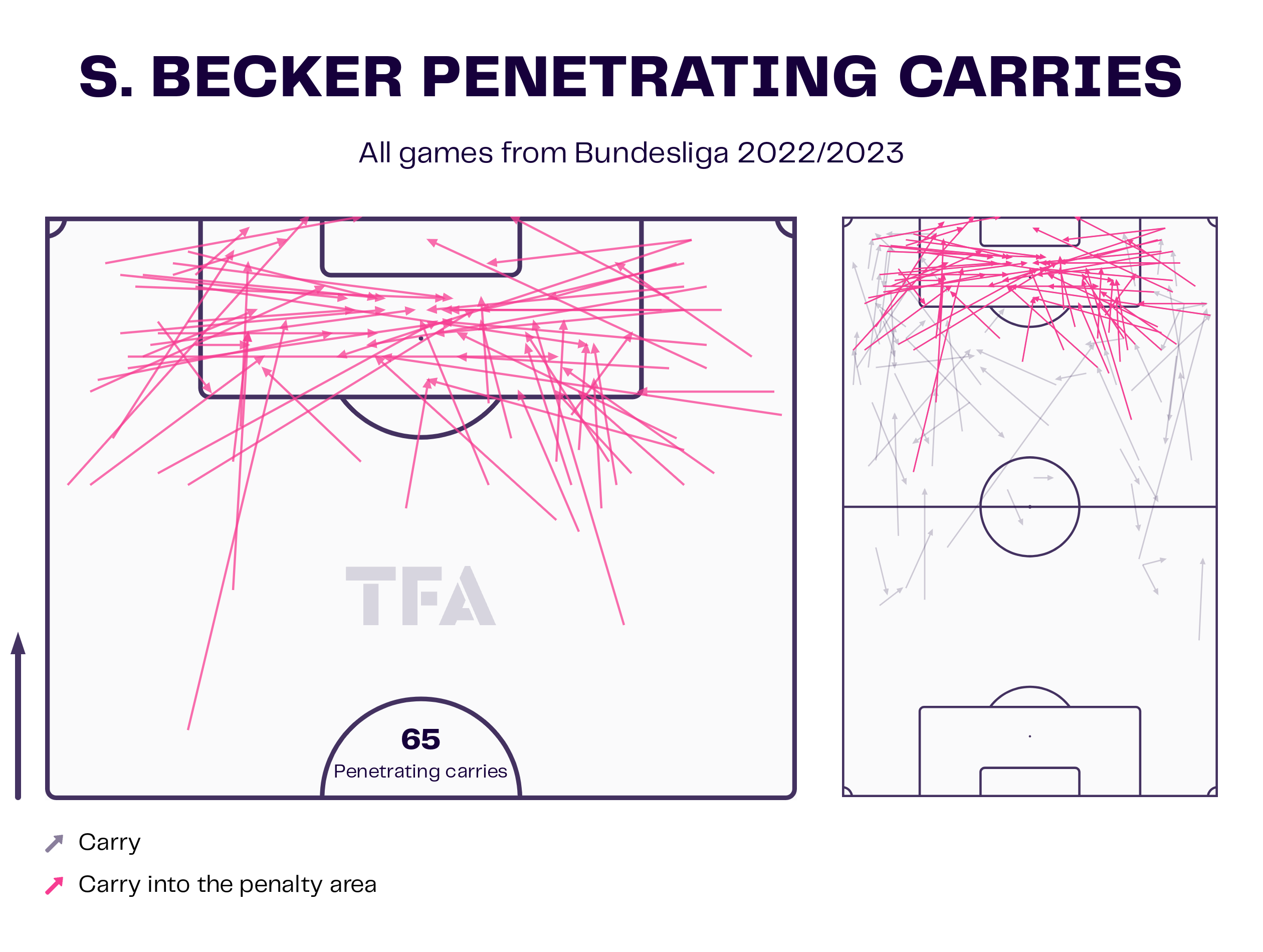 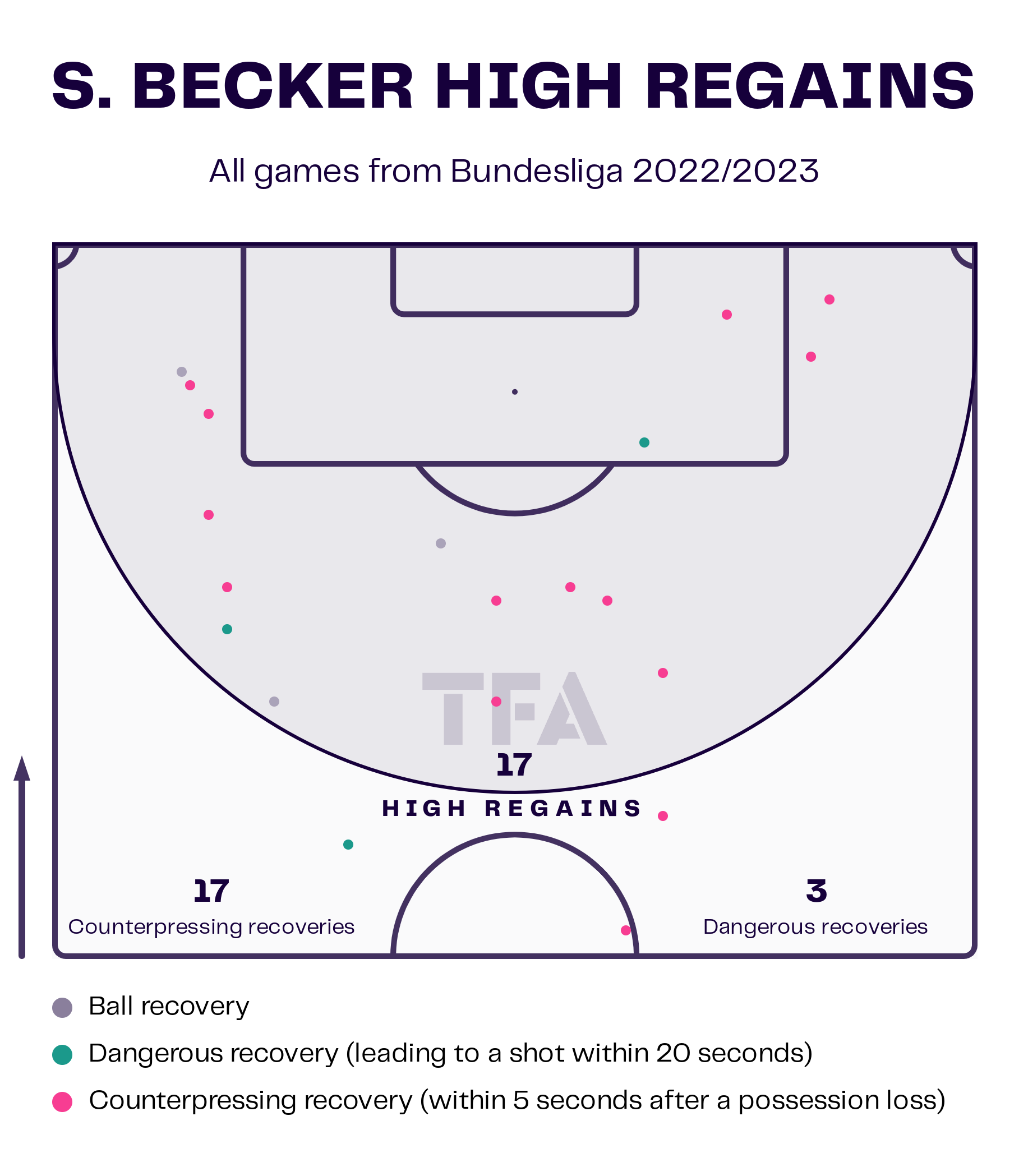 The above visual shows the high regains made by Sheraldo Becker in the current season of the Bundesliga. He has made 17 counter-pressing recoveries and three dangerous recoveries this season, with a couple of them inside the penalty box. Becker makes around 2.49 recoveries per game with 76.2% of them in the attacking half. These recoveries have helped the team to launch attacks and pose a goal threat. 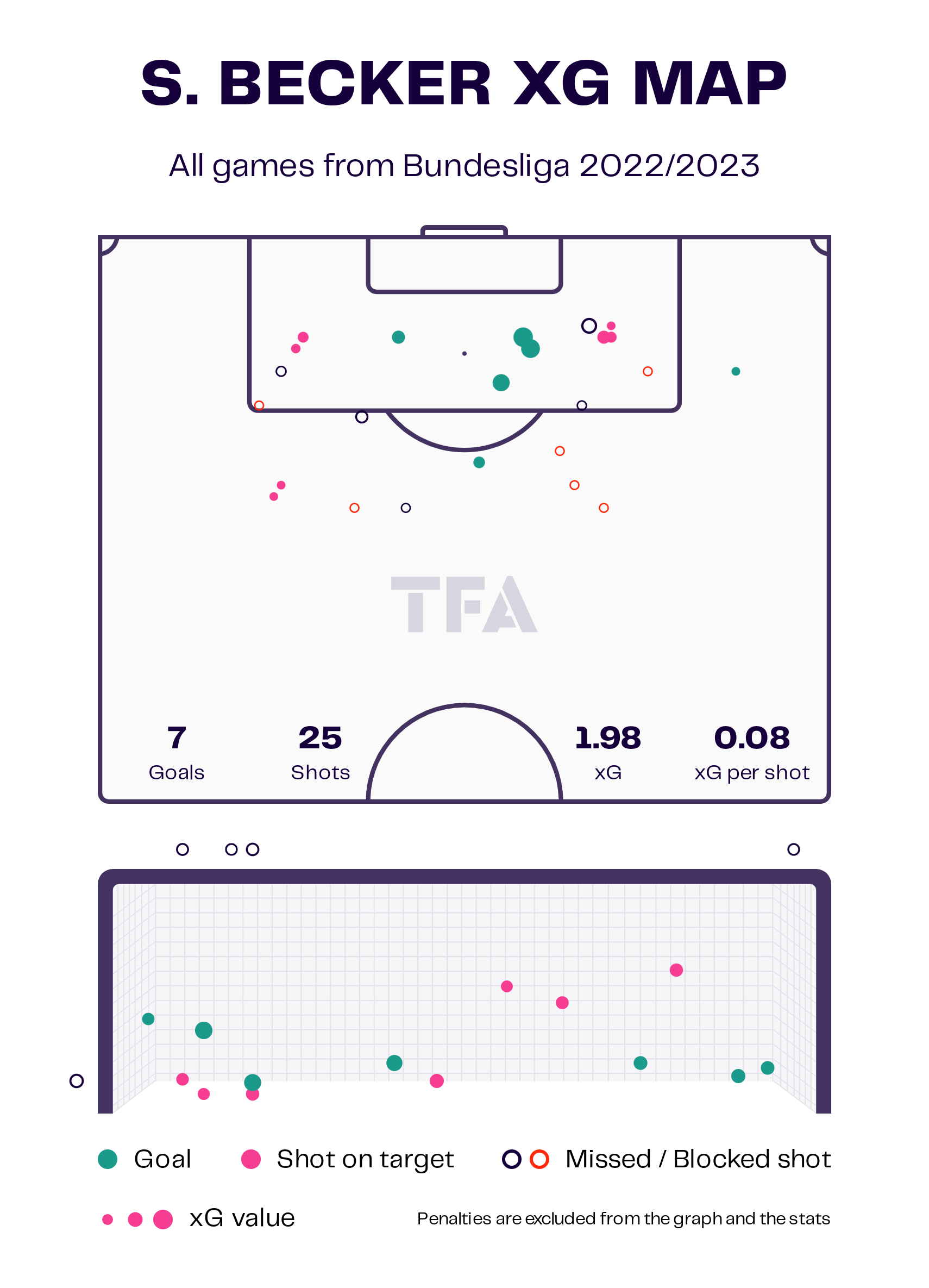 The above visual shows Sheraldo Becker’s xG map. He has scored seven goals this season from 25 shots, averaging 2.08 shots per game. Out of the 25 shots, 14 were on target, and seven were goals. He has exceeded his xG rate of 1.98 and has scored seven goals in the Bundesliga. He is a great finisher, which we can understand from the difference between his expected goals metric and the actual goals scored. 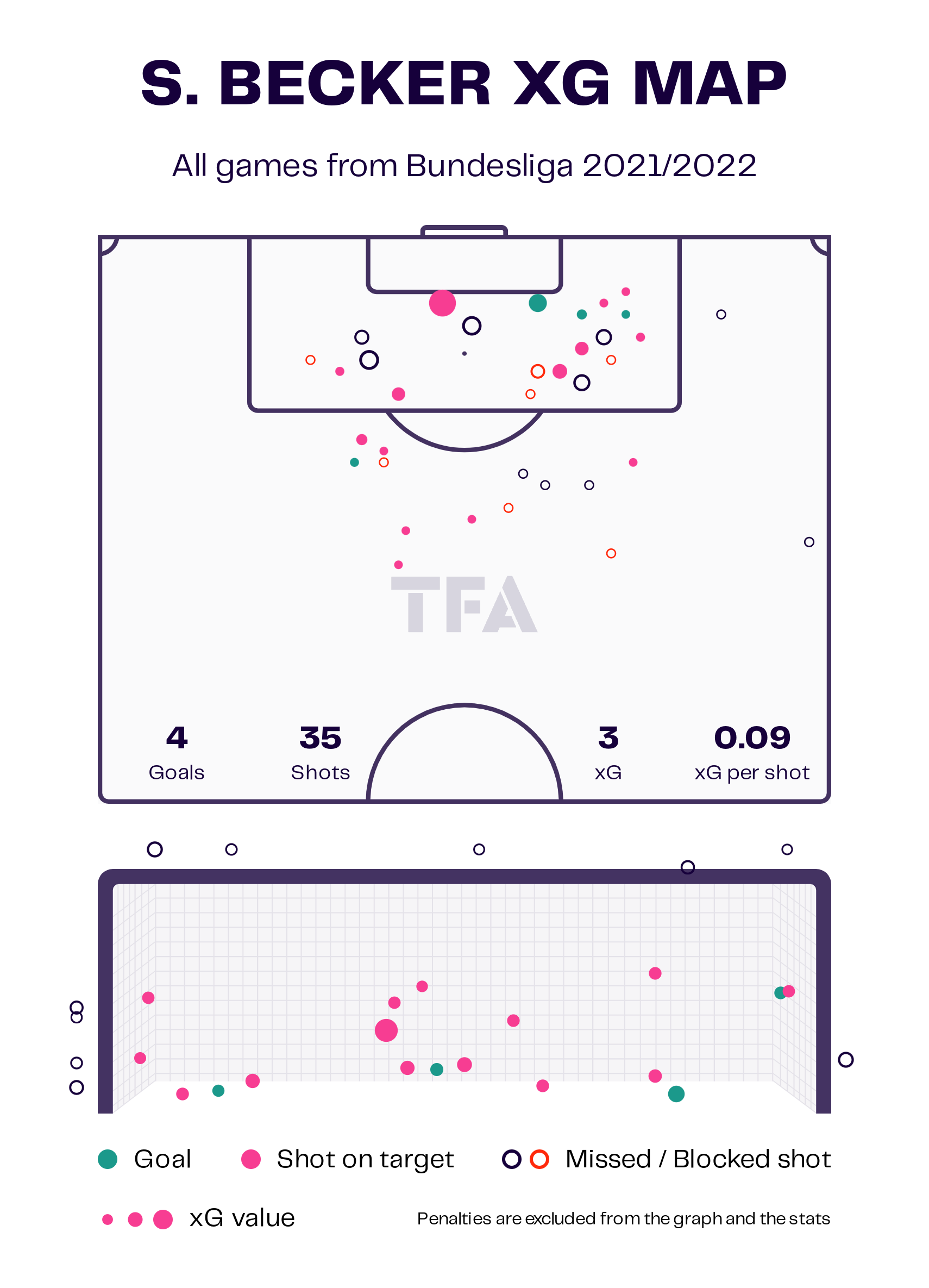 Sheraldo Becker has greatly improved his goal-scoring form and has scored almost twice as many goals as he did last season. He scored four goals last season from 35 shots. Out of the 35 shots, 18 were on target and 20 were from inside the penalty box. He had an xG rate of 3 and managed to exceed that. Moreover, Becker averaged 1.72 shots per game with 51.4% accuracy. All these figures have seen a rise this season, with Becker enjoying his best time at the club. 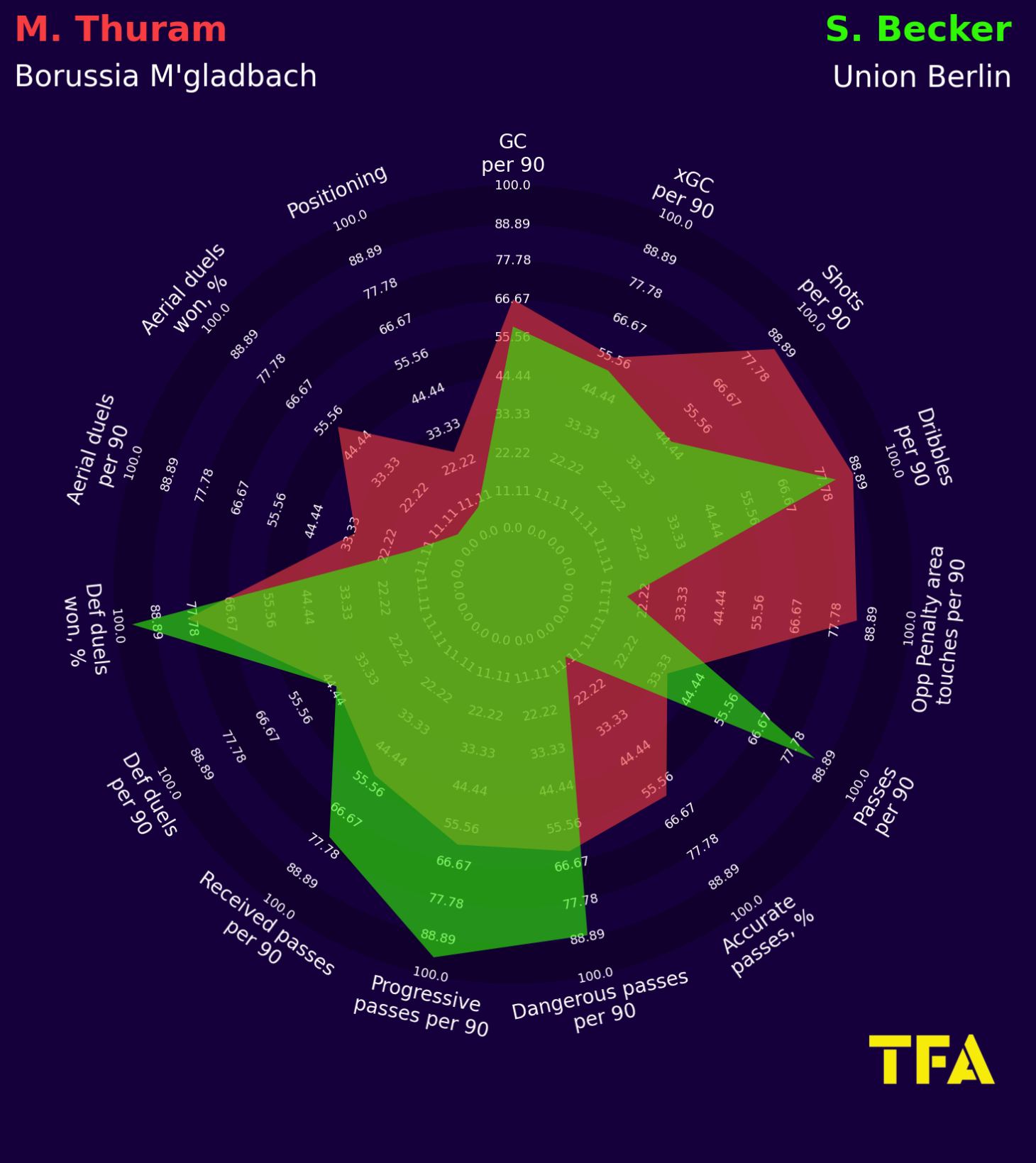 The above visual compares the radars of Sheraldo Becker with those of Marcus Thuram, who has scored the second-most goals this season. Becker has better stats in passes, dangerous passes, and defensive duels won per game. Thuram, on the other hand, has better stats in dribbles, shots, aerial duels, and entries into the opposition penalty box per game. Thuram has had a great season so far and was called up to the World Cup squad for France as well. Becker, who is enjoying one of his best seasons, is not far behind Thuram on the goal list.

Sheraldo Becker has had a brilliant start to the season and has been instrumental in Union Berlin’s success this season. He is efficient in front of the goal and has often provided the finishing touch for them. The 27-year-old will be hoping to pick up right where he left off when the season restarts in January.

Under the microscope: How the Hungarian youngster is becoming a key...

The Stats: A draw between Ecuador and Peru in Copa America...