This summer, Serge Gnabry signed a contract extension with Bayern Munich until June 2026. Ever since he signed the deal, he has shown the Bayern board that they were right in doing so. The 27-year-old is in staggering form and has scored ten goals and assisted ten more across all competitions. His contributions going forward have been incredibly important for Bayern to climb up to the top spot in the Bundesliga. The German International, who had 64 goals and 40 assists for the Bavarians at the start of the season, has gone on to add another eight goals and seven assists to his name in all competitions. We look at his stats this season to see how he has returned the faith that the management and the coach put in him. 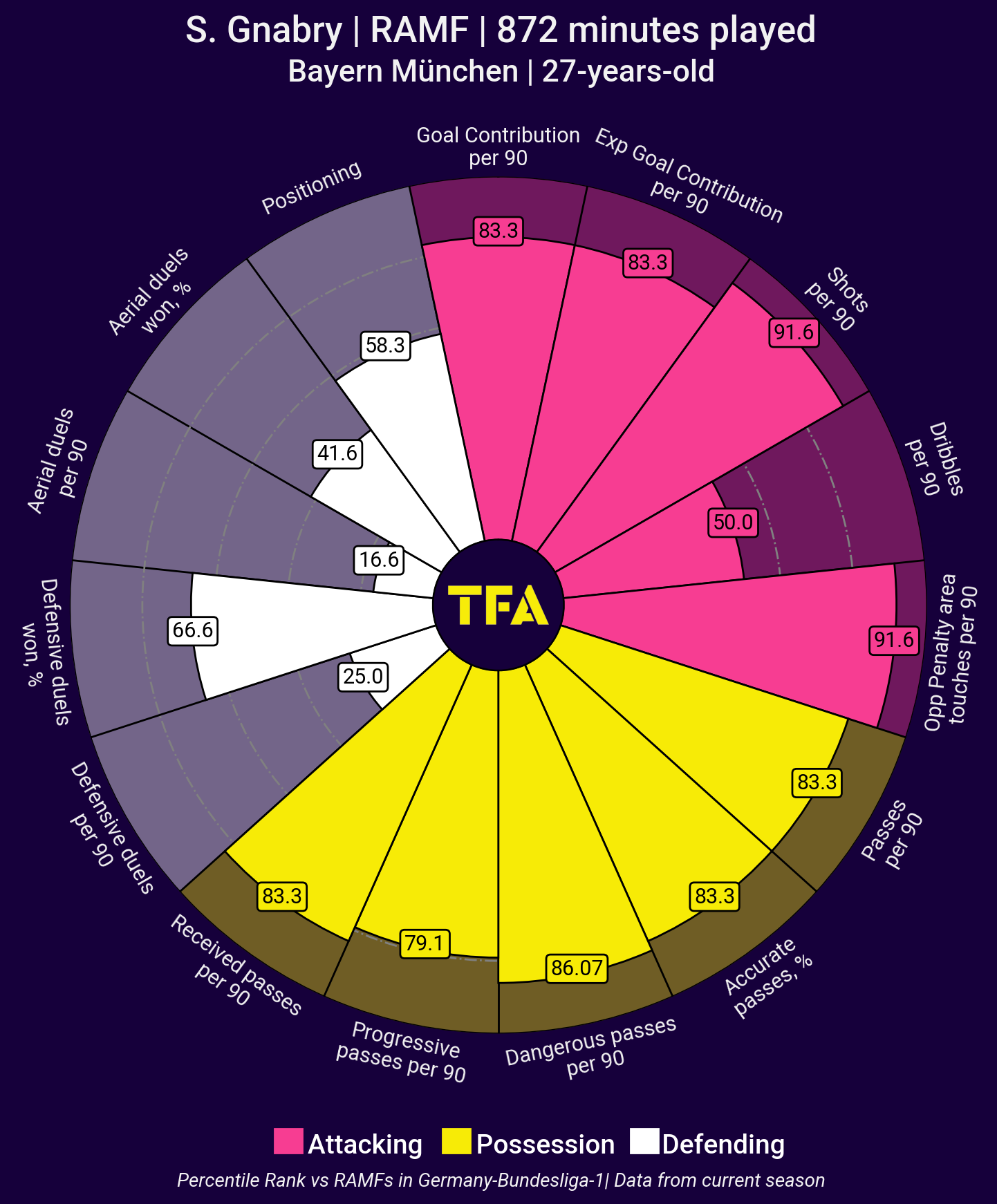 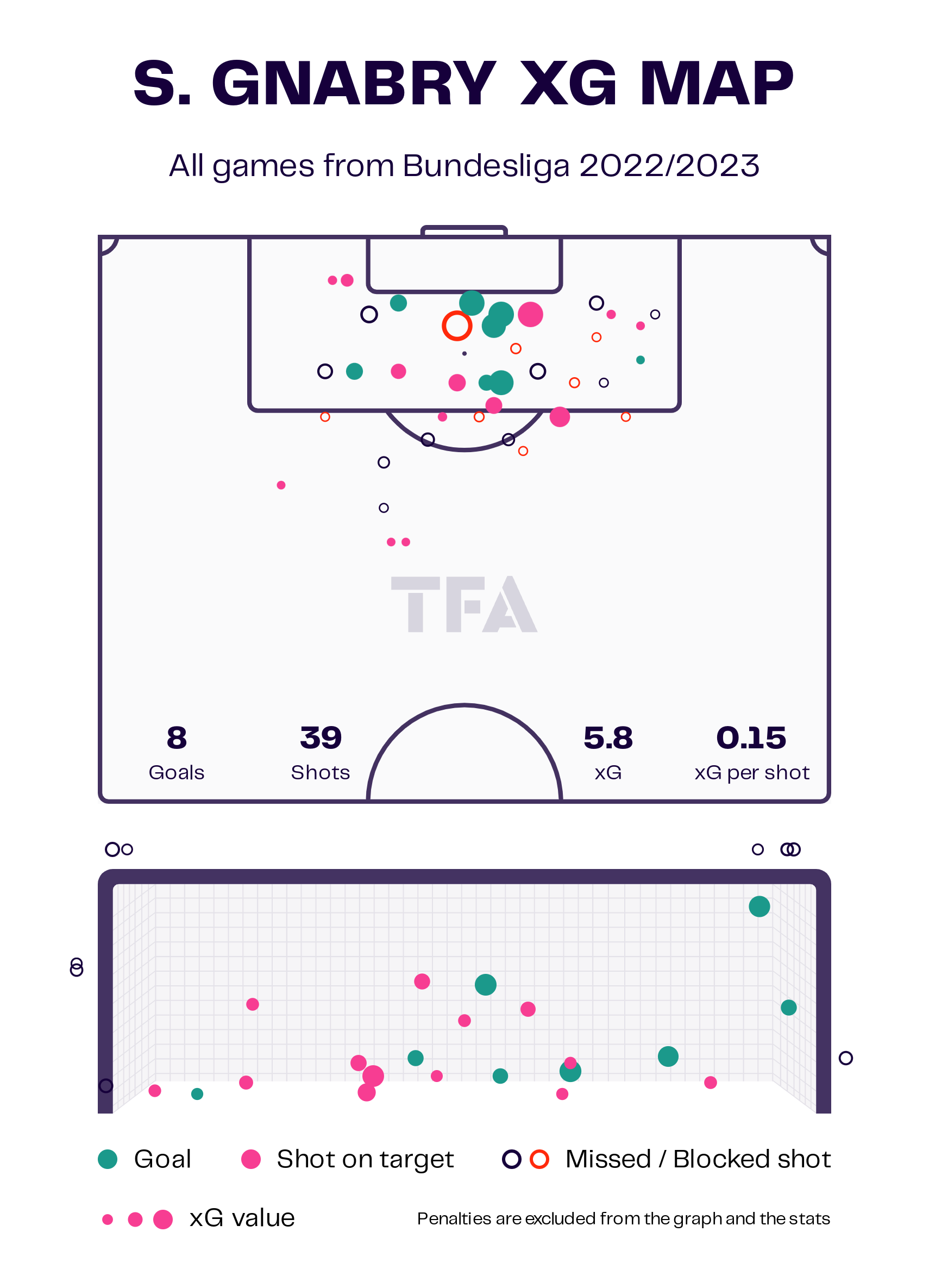 Coming off the back of a brilliant season, Serge Gnabry started right where he left off last season. He has scored eight goals this season and is in brilliant form. The above visual shows the xG map of Serge Gnabry from this season. He has attempted a total of 39 shots, out of which 26 were from inside the penalty box. Of these 39 shots, 21 were on target as well. He usually plays either as a right-attacking midfielder or a right winger and therefore has to cut inside to score goals, hence the low xG per shot. 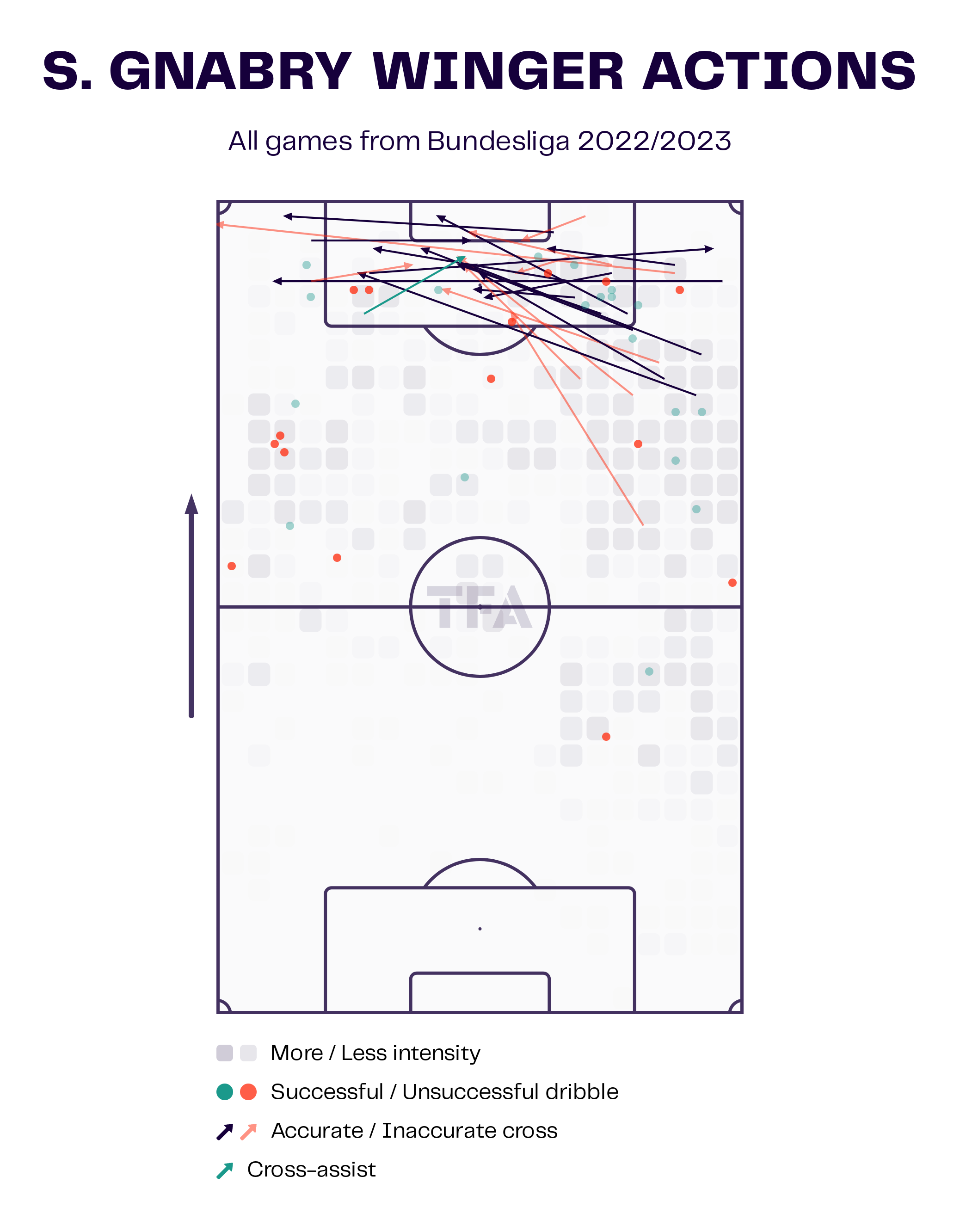 Serge Gnabry also plays as a winger sometimes for Bayern Munich and Germany, and when he does, he does what he does best. Gnabry makes good use of his speed, racing past players to launch attack after attack. The above visual shows the actions of Gnabry as a winger. He can either curl in stunners from almost impossible angles or whip in crosses to other players. The 27-year-old makes an average of 2.54 crosses per game with 46.7% accuracy and has four assists as well. Gnabry is also capable of taking on players 1v1 and makes an average of 6.84 offensive duels with a 42.1% success rate. 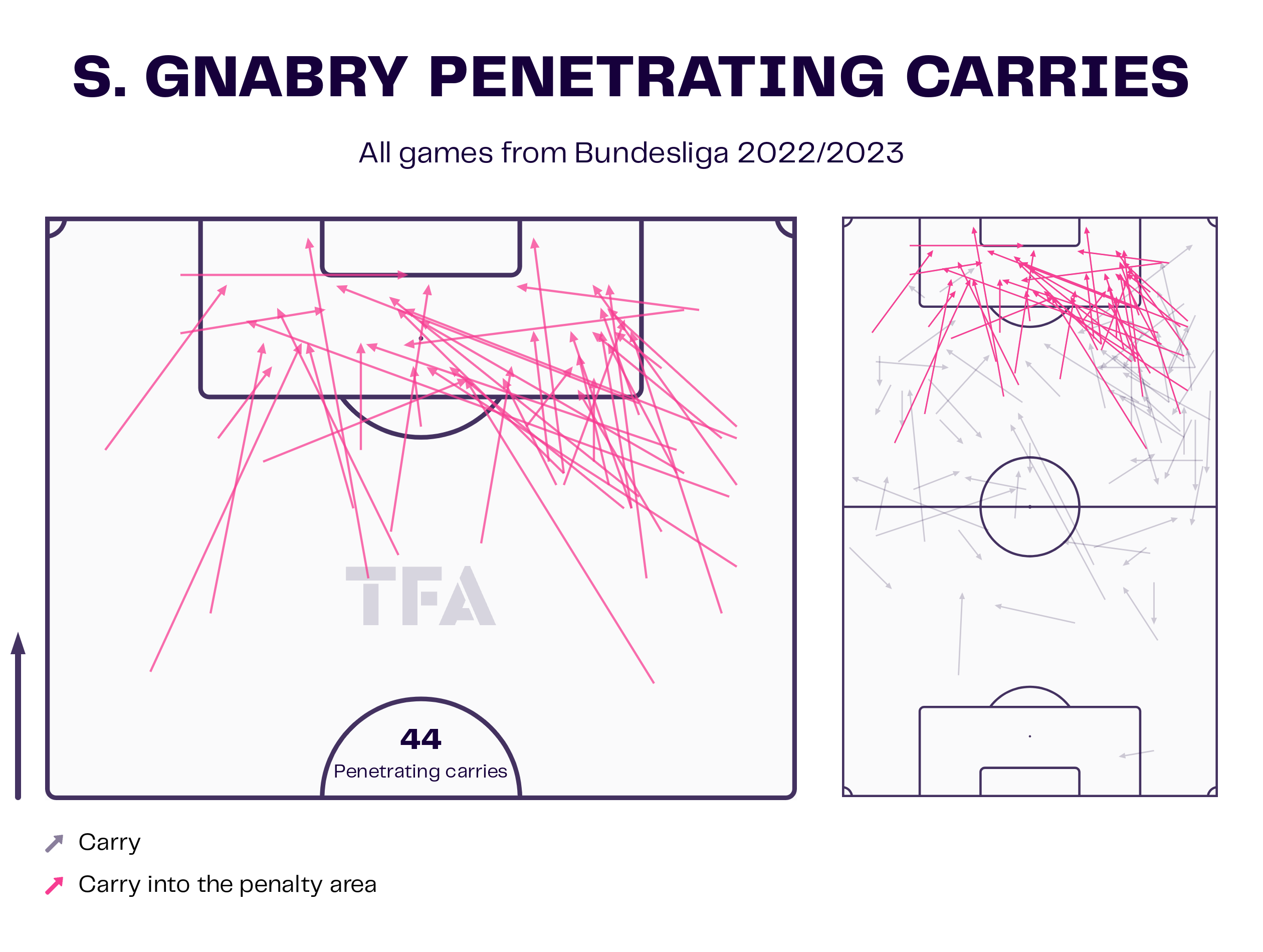 Another quality of Serge Gnabry that makes him special is his dribbling skills. He has good control over the ball and is fast, so he can dribble past players with ease. The above visual shows the penetrating carries made by Gnabry this season. The German International makes an average of 3.62 dribbles per game with 51.6% success and 2.26 progressive runs as well. We can observe that he cuts inside the wing into a more central position and sometimes dribbles into the penalty box as well. Gnabry also enjoys an average of 4.75 touches in the penalty box. 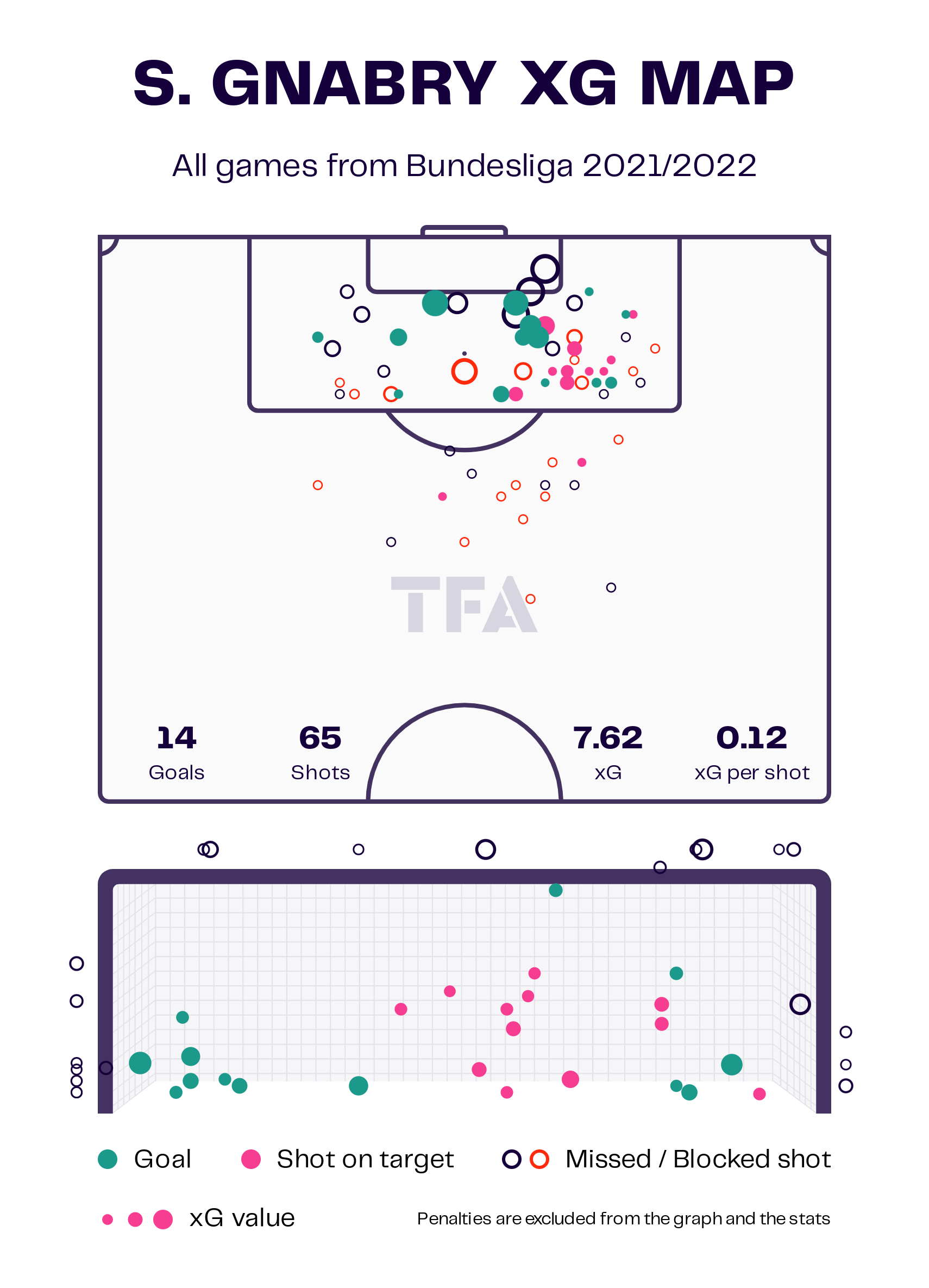 Gnabry has more than half the goals and shots this season compared to last. He attempted 65 shots last season and scored 14 goals. Of these 65 shots, 48 were from inside the penalty box, and 26 were on target. The number of shots per game has seen an increase as it has gone from 2.95 to 3.22 shots per game. Gnabry also averaged 0.57 goals per game last season, while it has increased to 0.62 goals per game this season. 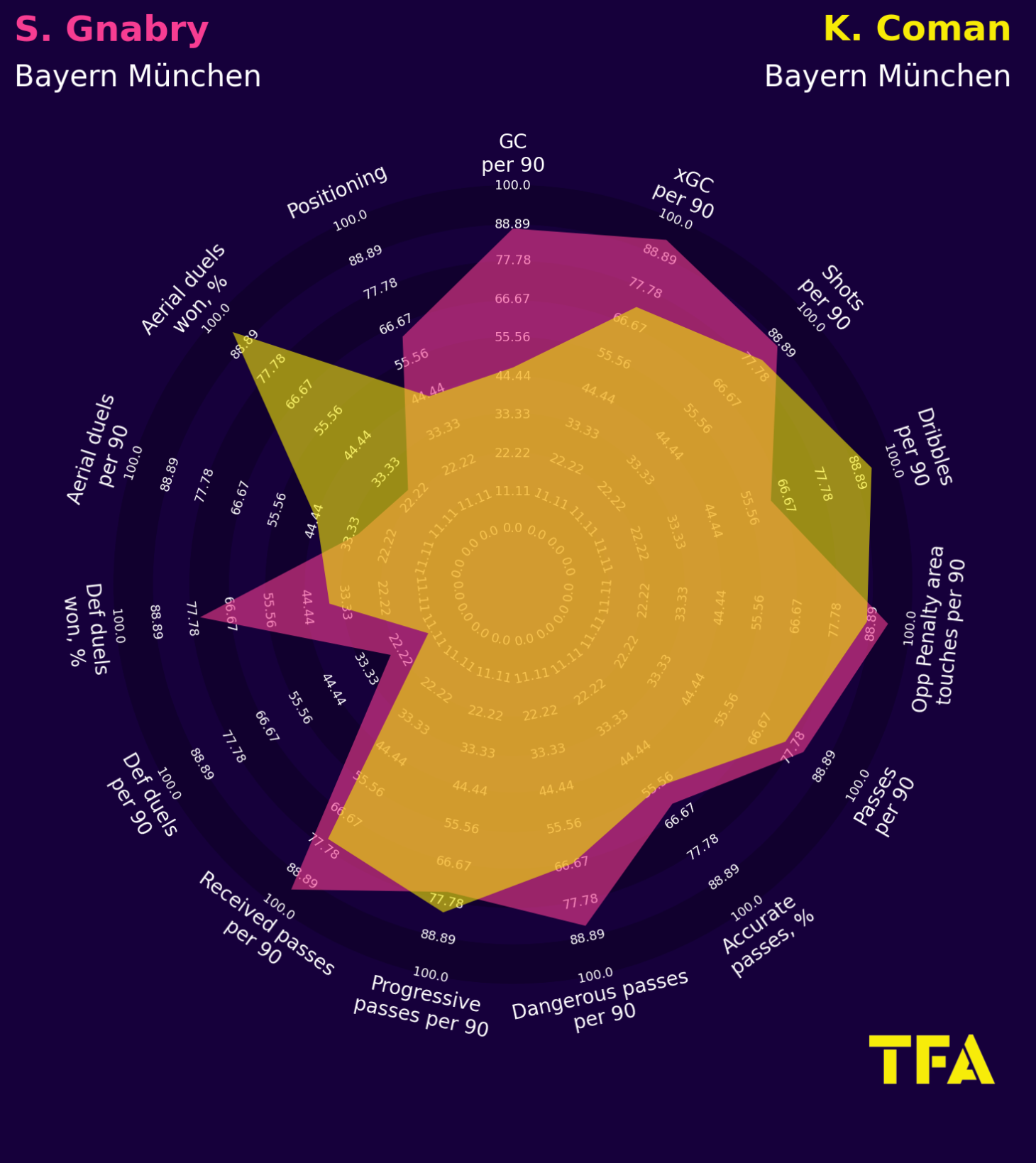 Julian Nagelsmann has two players fighting for the same spot on the right flank. Both Serge Gnabry and Kingsley Coman are right-wingers and have almost the same profile. They are both fast and can dribble well. They are both well suited to his system as well. Even though Coman has more dribbles per game and aerial dominance, Gnabry’s consistent efficiency is hard to look past. In addition, he makes more goal contributions per game and has scored and assisted more than the Frenchman.

Serge Gnabry has continued his excellent form from last season and is Bayern’s top scorer this season with eight goals to his name. He has signed a contract extension until 2026 and has set his eyes on becoming one of the best to wear the Bayern colours. Julian Nagelsmann will be hoping the 27-year-old can recover from Germany’s shock World Cup exit soon and resume his service for the club.

The Stats: Berlin salvage point away against Hoffenheim