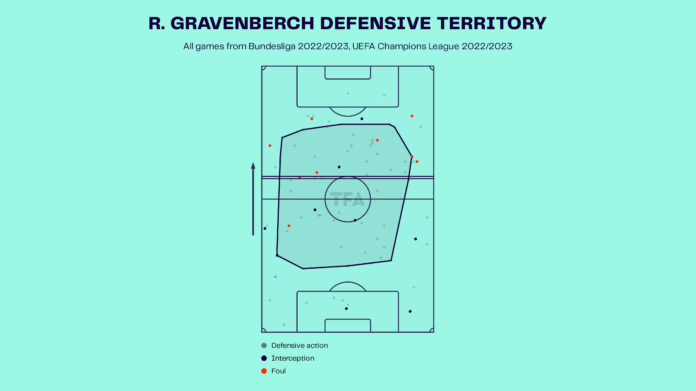 Ryan Gravenberch was in great form when he played under Erik Ten Hag for Ajax. Bayern Munich quickly snagged him on a five-year deal. But things have not exactly gone according to plan for the Dutch midfielder. Ever since making the move to Munich, he has only played ten matches in the Bundesliga, coming on as a substitute in all of those matches. There were reports that the 20-year-old was unhappy with his playing time at Bayern Munich. While Bayern already has a lot of established players in the position, Gravenberch’s case is curious. We look at some stats to understand how things have not gone according to plan for Gravenberch at Bayern Munich. 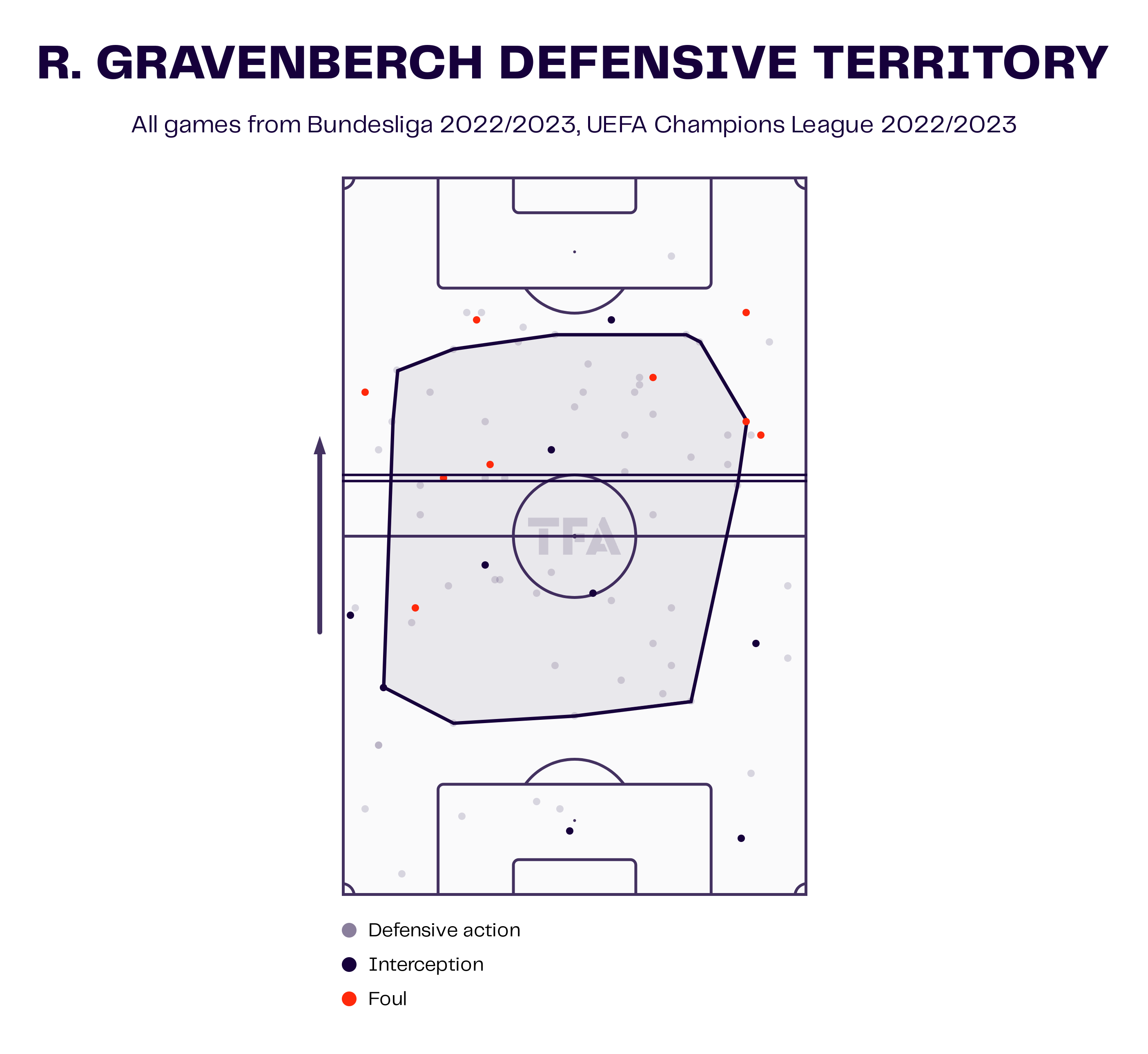 Gravenberch usually plays as a central midfielder for Bayern Munich. He has played both as a central midfielder and a defensive midfielder for Ajax in previous seasons. He has a tall, strong presence and contributes well to the defence as well. But he has not started any matches, due to no fault of his own. Bayern has great, established players in the midfield, and Gravenberch will have to pull off great performances one after another if he wants to change the manager’s mind. The 20-year-old makes an average of 6.16 defensive duels per game with a 54% success rate. He also makes around three interceptions per game and wins 60% of the aerial duels he takes part in. But with players like Leon Goretzka, who manages the defensive side well, it becomes difficult to give Gravenberch a chance. 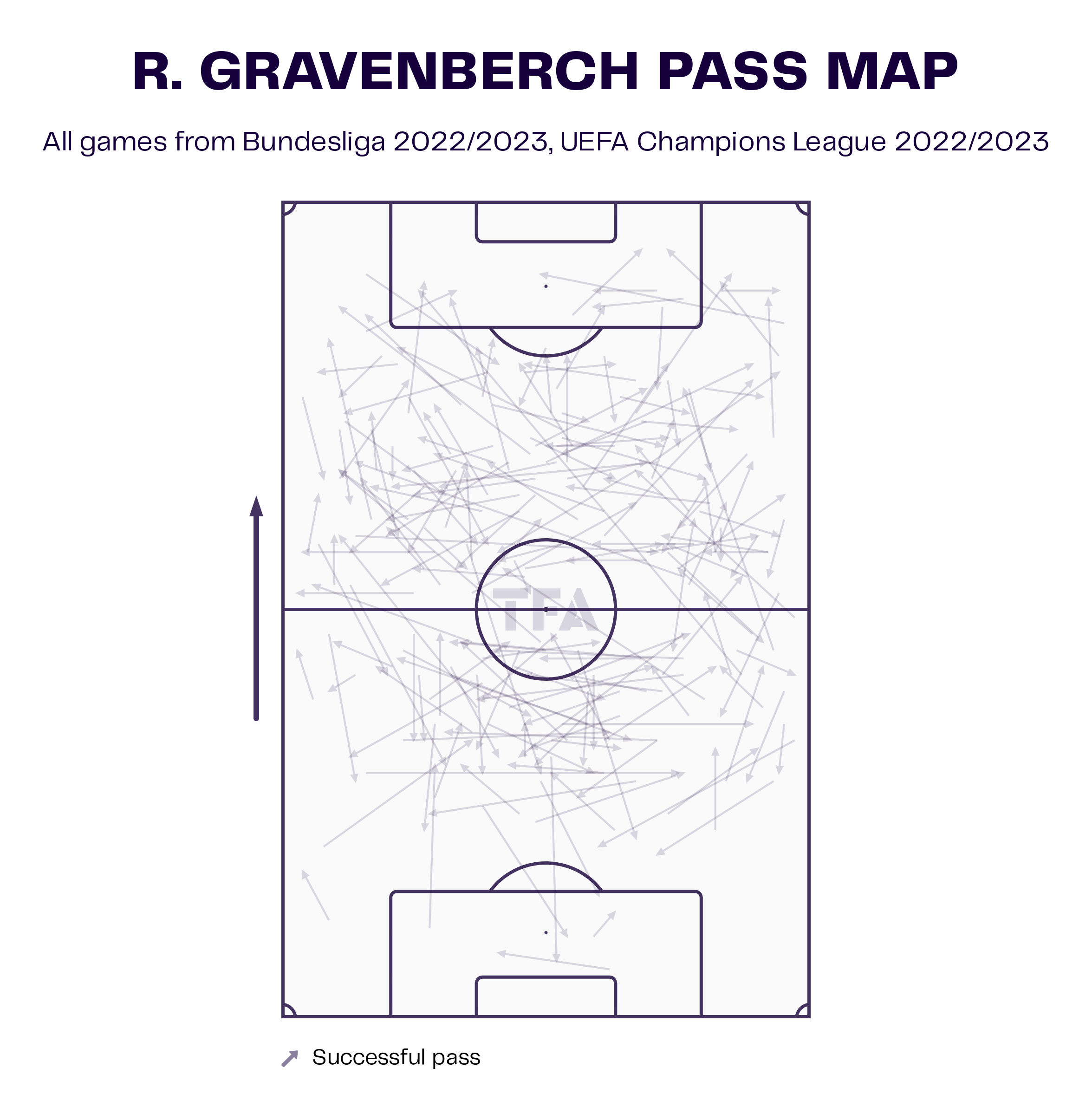 Gravenberch has a good passing record. He completes 85.4% of his passes attempted and averages 46 passes per game. He uses his strength well and is therefore not easy to dispose of. The 20-year-old is a good presence in the midfield and makes around 4.92 passes into the penalty area with a success rate of 82.5%. But again, Bayern has established players in the midfield; therefore, it has proved hard for Gravenberch to find a place in the starting XI. 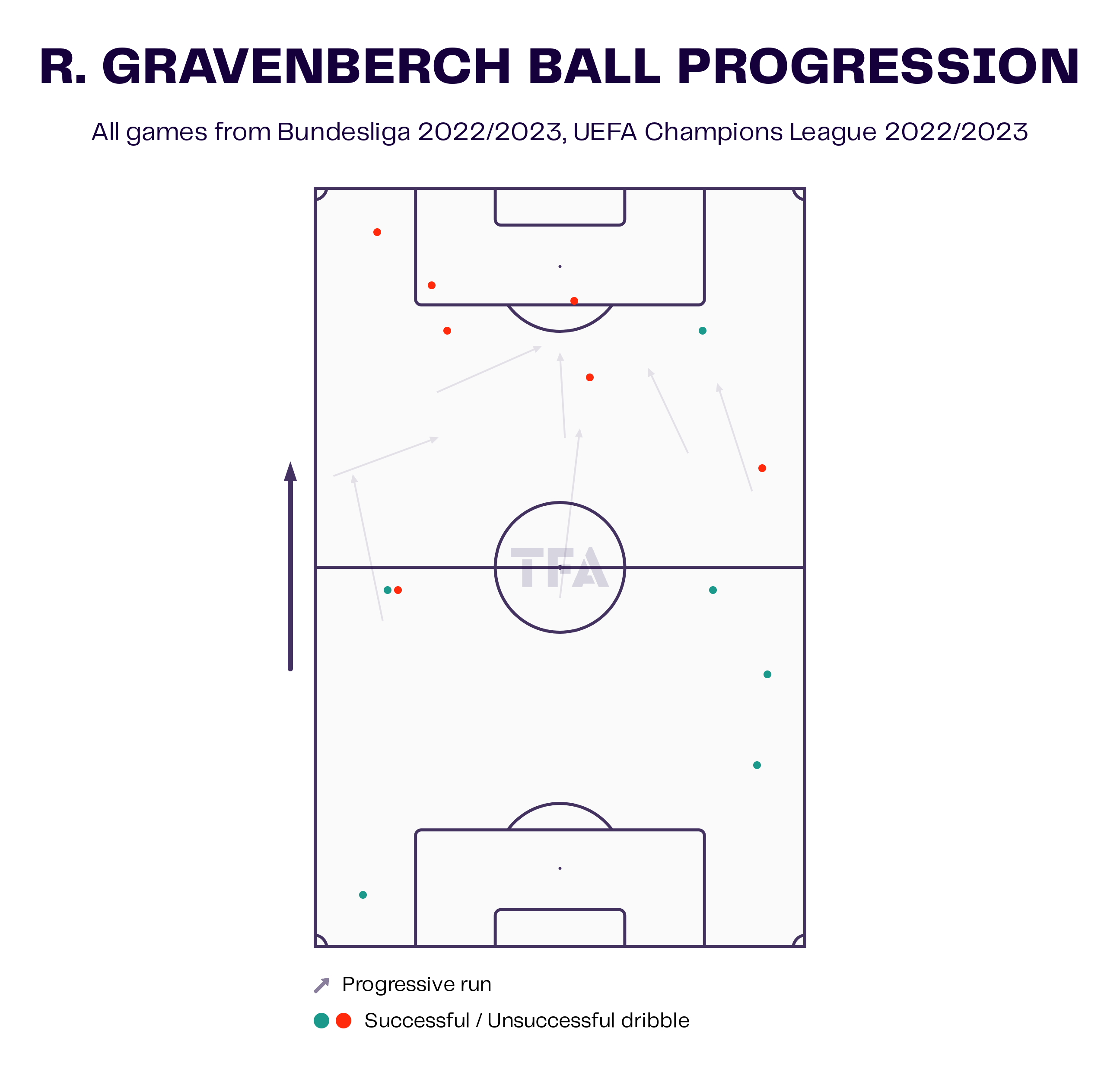 Another quality of Ryan Gravenberch that could give him an edge over his fellow midfielders is his ball-carrying ability. He is a strong player who uses his strength and height to his advantage and is therefore not easy to dispossess. He makes around 2.71 dribbles per game with 68.2% success. The youngster also makes around 1.5 progressive runs per game on average. He gets forward and can contribute well to the attack as well. 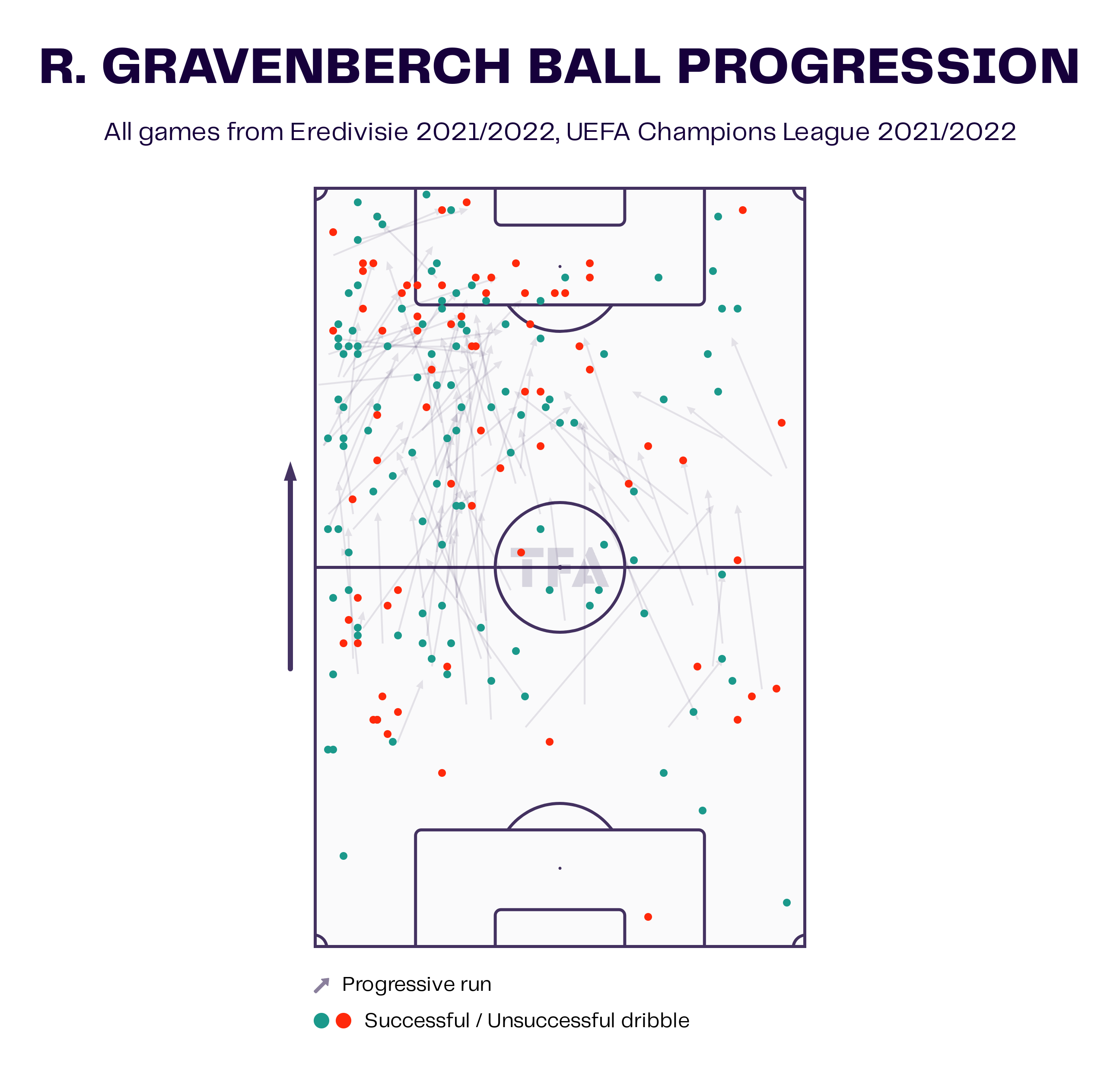 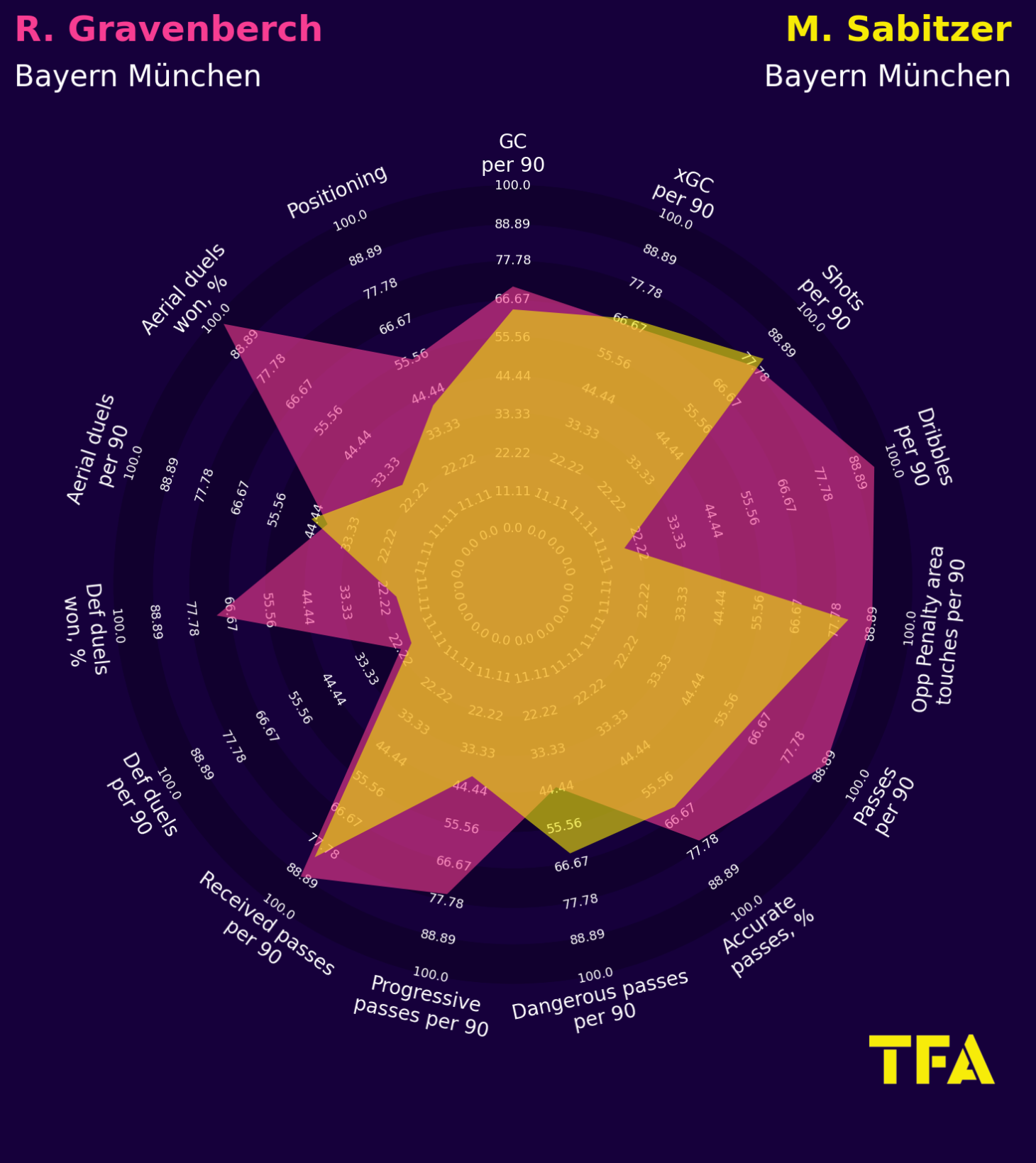 It is difficult for Ryan Gravenberch to start with other established players on the team. But his stats and radar show that he deserves more playing time. The above visualisations compare the radars of Ryan Gravenberch and Marcel Sabitzer. We can observe from the radar that Gravenberch has better stats in almost all the fields except for shots per game. Gravenberch is better at dribbling, duels, and positioning. Julian Nagelsmann’s stats cannot be overlooked for long.

Ryan Gravenberch was sensational for Ajax last season. But the move to Bayern has cost him not only game time but even a place in the World Cup squad. Even though the move has not been what he expected it to be, the blame cannot be entirely placed on the individual. The Dutch individual will be an asset to the club if the player is willing to be patient.