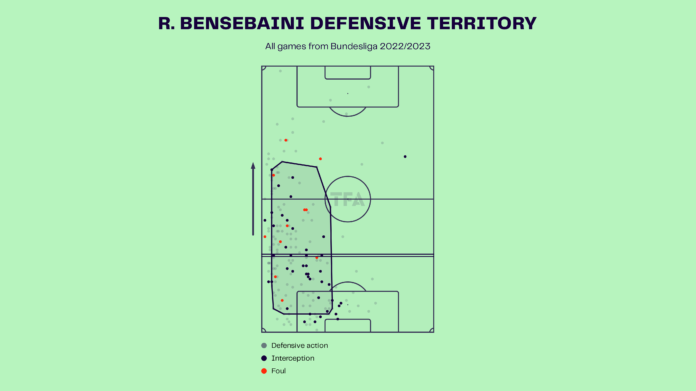 Borussia Monchengladbach is enjoying a good season, apart from their away form. They have been good generally and have scored the fourth most goals in the Bundesliga. Their centre-forward Marcus Thuram has scored ten goals this season and is second on the list for the most number of goals scored. Another player who has contributed to their goals is left-back Ramy Bensebaini. He has scored five goals in the Bundesliga from 15 matches and one in DFB Pokal as well. His contributions, both in attack and defence, have played a big part in Monchengladbach’s success this season. Therefore, we look at some stats to understand how he is proving to be an important player for Borussia Monchengladbach. 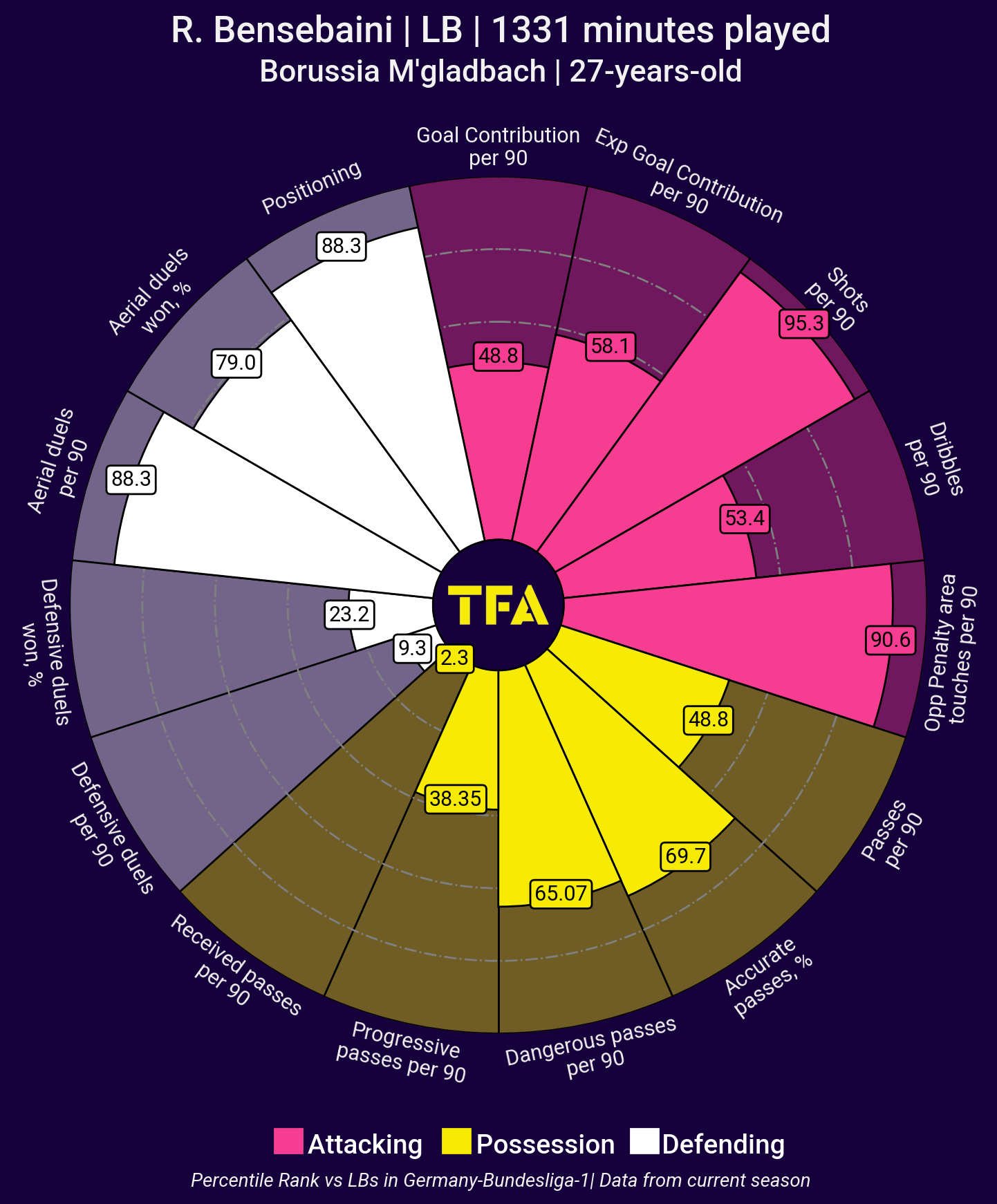 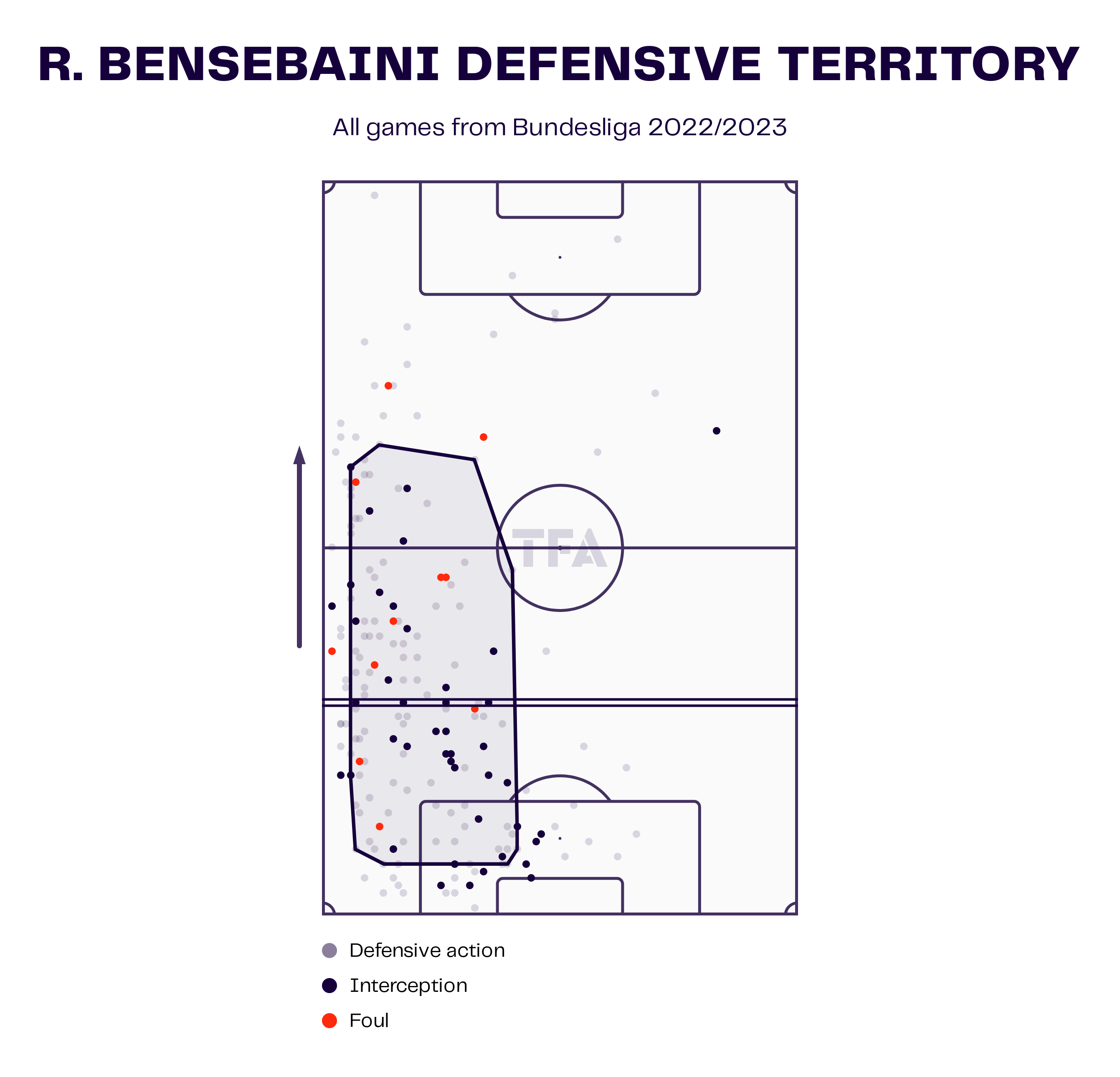 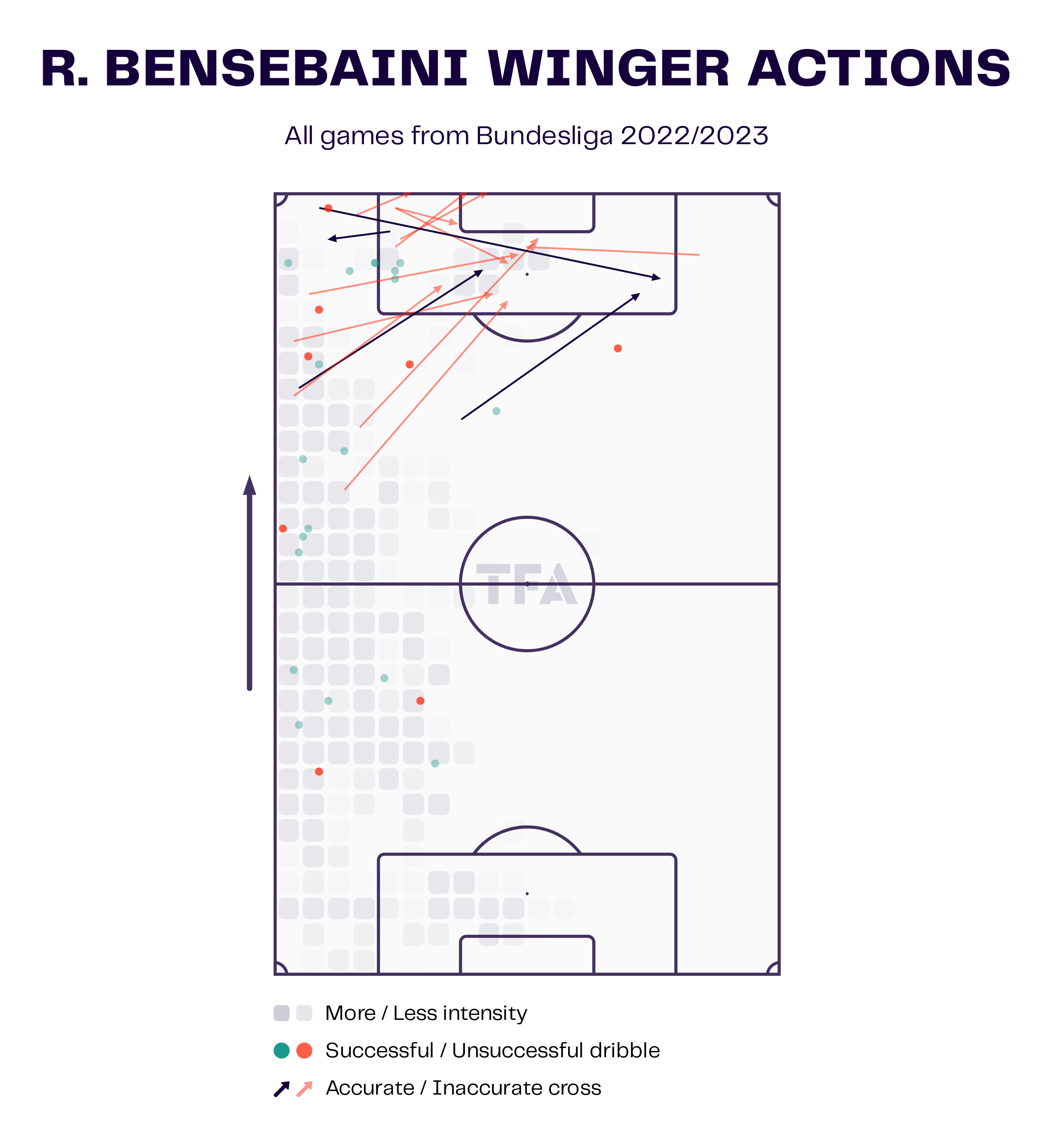 The above visual shows the actions of Ramy Bensebaini as a winger. He is an attacking left-back who overlaps a lot. He can dribble past players, play crosses into the box, and score goals himself. Bensebaini makes an average of 1.83 dribbles per game on the left flank. When he occupies the advanced positions, he plays an average of 1.42 crosses per game, even though with a very low 19% success. Moreover, he makes around 5.27 offensive duels per game with 50% success. 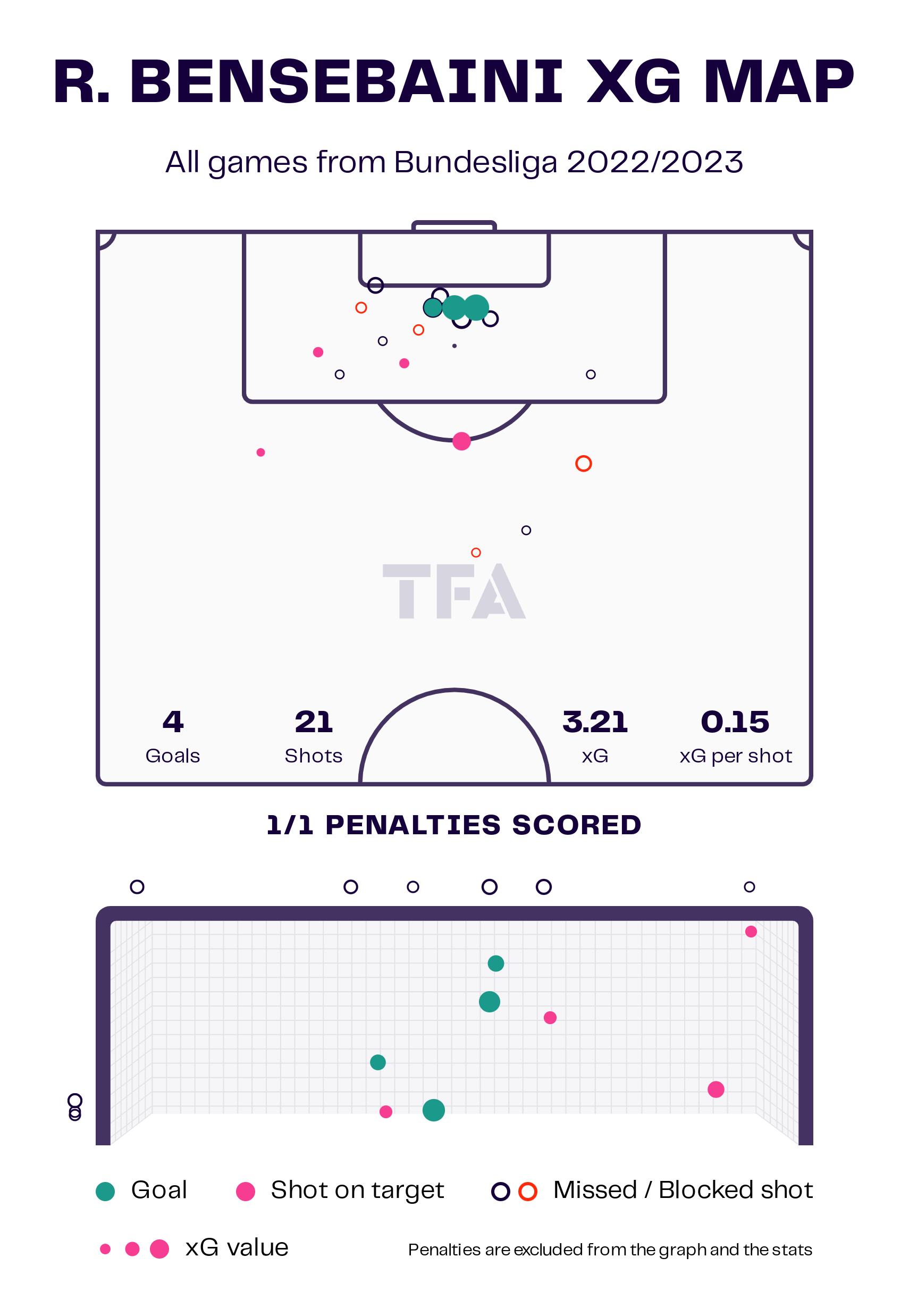 The above visual shows Ramy Bensebaini’s xG map from the current season. He has scored five goals in the Bundesliga. He has played 21 shots this season, with an average of 1.49 shots per game. Bensebaini has a shooting accuracy of 40.9% this season and has played eight shots on target. He scored four from open play and one from the spot. The left-back’s goal contributions have been important for Monchengladbach. 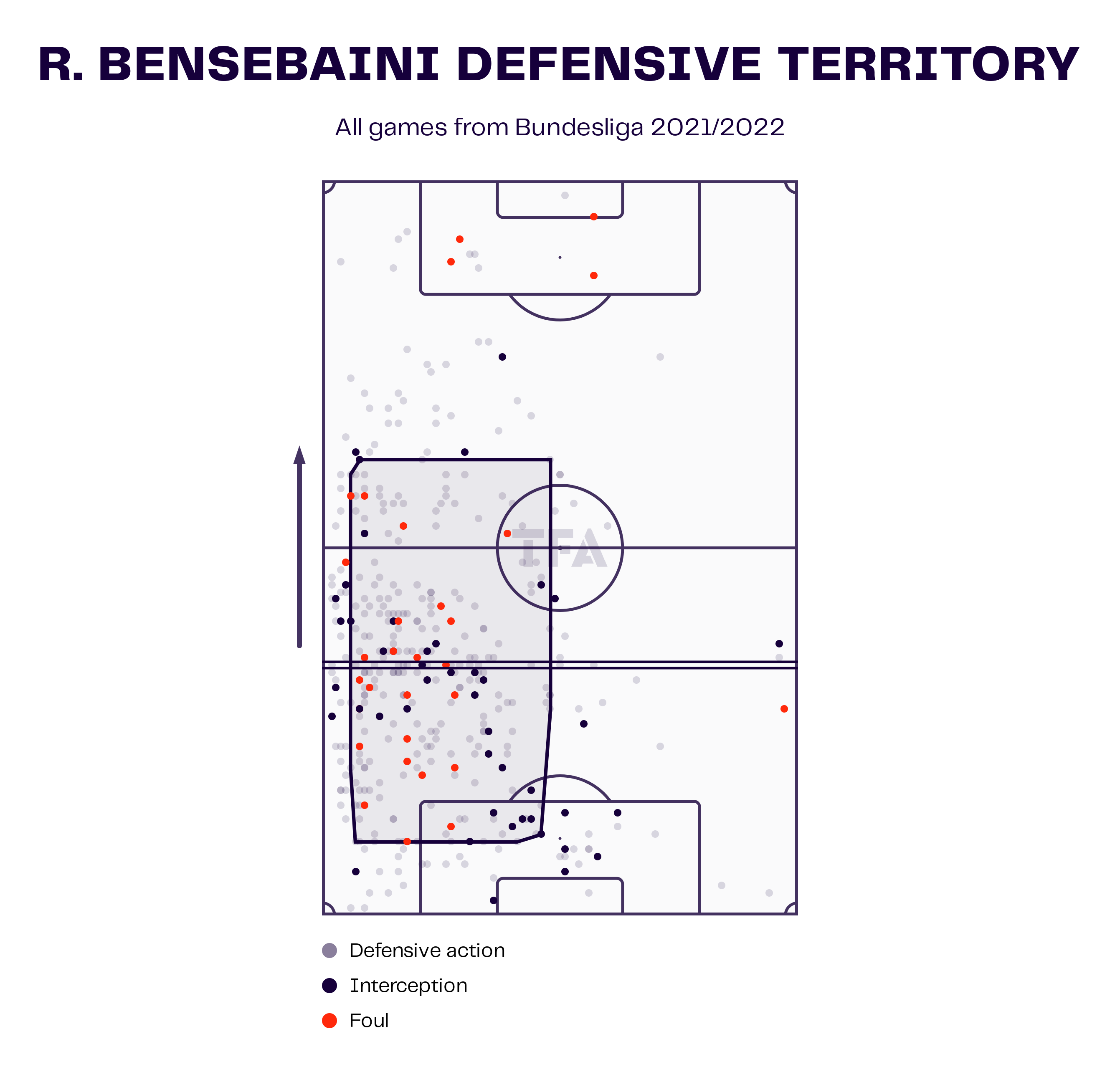 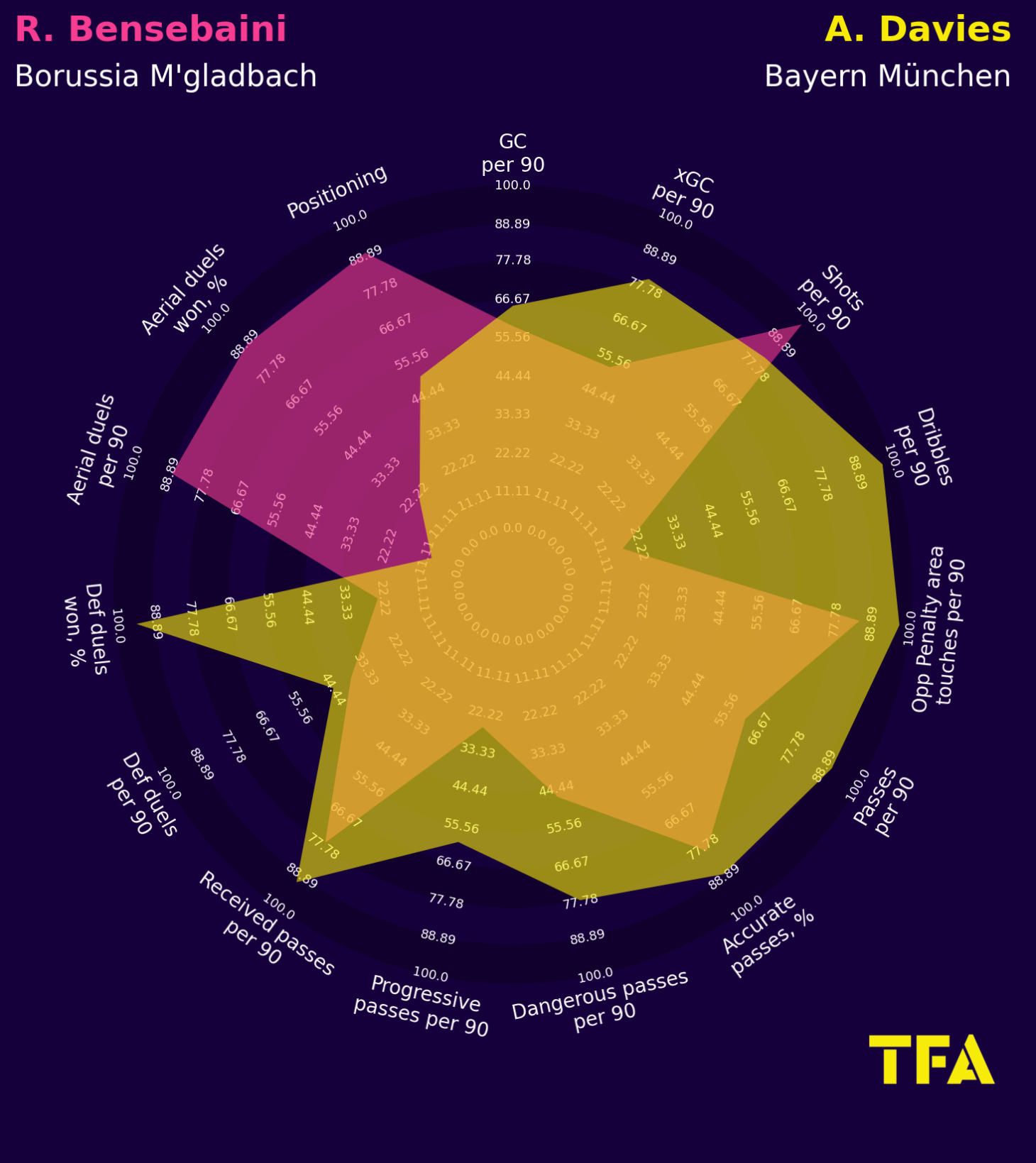 The above visual shows the comparison of radars between Ramy Bensebaini and Bayern Munich left-back Alphonso Davies, who is one of the best left-backs in the league. Both players have played big roles in their respective teams’ success and are attacking full-backs. Bensebaini has better stats in shots, aerial duels, and positioning, while Davies has better stats in all other areas. They both will continue to play important roles for their sides once the season restarts.

Ramy Bensebaini has been in brilliant form this season and has been great in attack. His percentile score in defensive duties has been good except in defensive duels, where he is ranked below average. Therefore, this will have an effect on the betting market as well. Looking at the 1×2 market, his contributions towards the team are likely to keep their odds high, while the overlays are expected to thrive considering his goalscoring form.

Ramy Bensebaini’s form has been a blessing for Borussia Monchengladbach this season. His goals have taken some pressure off the forwards, and his defensive work has also been neat. The fans and the management will be hoping that the Algerian can keep delivering the goods in the second half of the season as well.