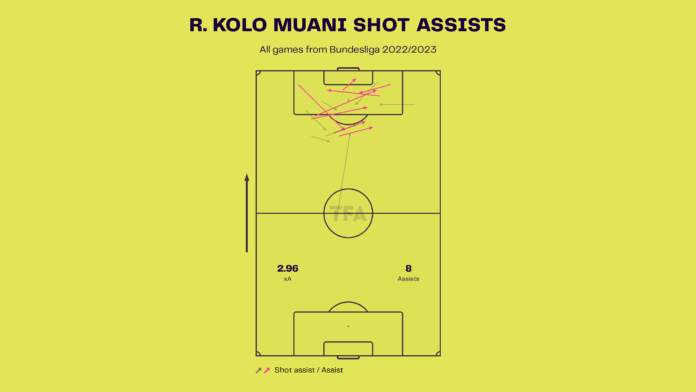 It is said that someone’s loss is someone else’s gain. This proverb came to life when Christopher Nkunku picked up an injury during training and opened the door for Randal Kolo Muani to join the World Cup squad for France. Randal Kolo Muani’s inclusion, though, should have happened earlier as the youngster is having a stellar season for Eintracht Frankfurt and is leading the assists table with nine assists to his name. He has five goals to his name as well. He has helped his team climb to the fourth position in the table and looks ready to take on the world stage.

We take a look at some stats to understand why Randal Kolo Muani is the perfect man to replace Nkunku for France.

Kolo Muani has played in 14 matches this season, starting 13 of them and coming off the bench in one. He has five goals to his name and nine assists this season. His contributions have been critical to Frankfurt’s rise to fourth place. 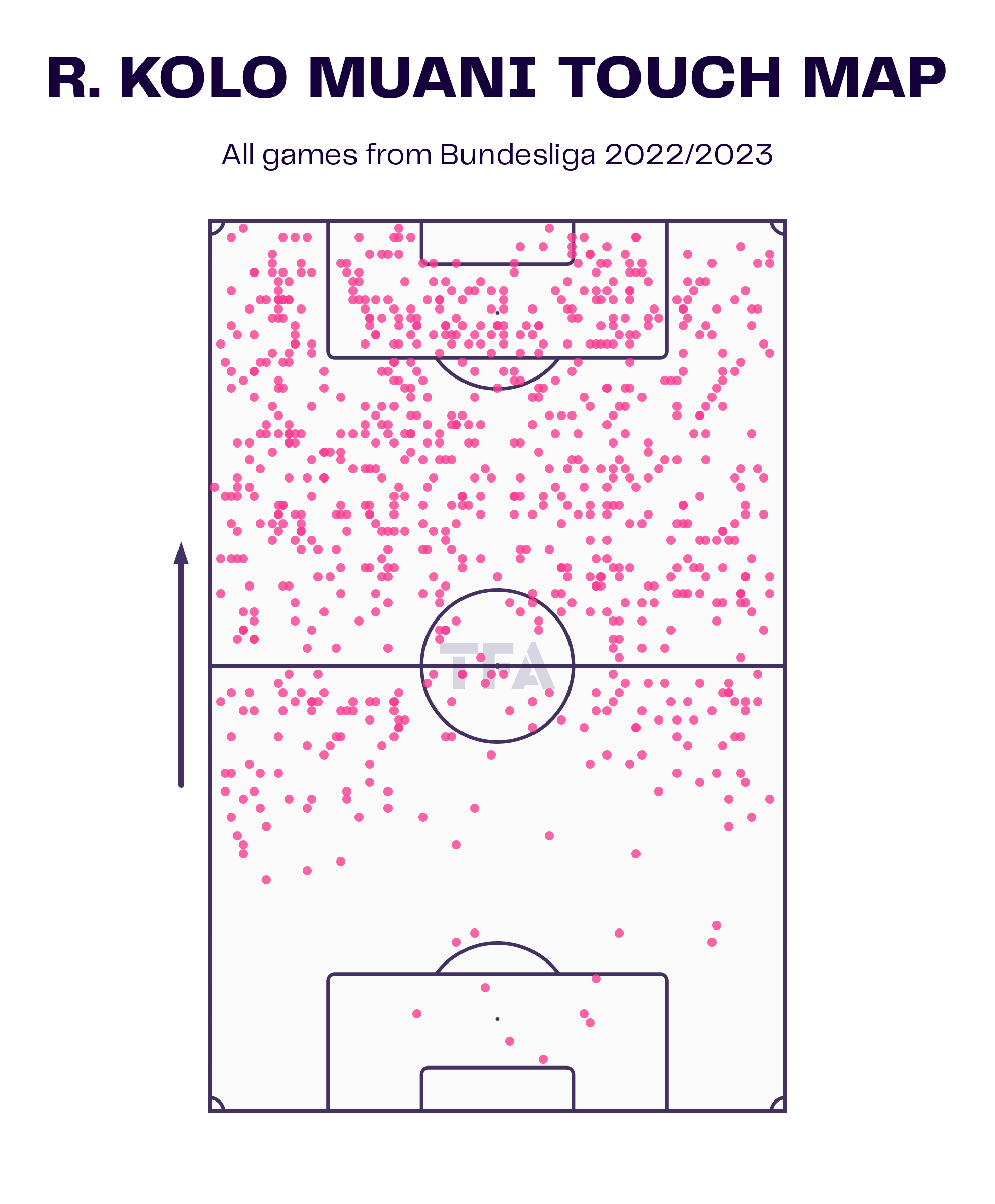 The above viz shows the touch map of Randal Kolo Muani in the Bundesliga. Playing either as a centre-forward or an attacking midfielder, Kolo Muani is the perfect replacement for Nkunku. We can observe from the touch map that he likes to stretch the play, making use of the width of the field. He has excellent dribbling skills and therefore runs into the space with the ball at his feet. He also gets into the opponent’s penalty area and enjoys an average of 4.91 touches as well. Christopher Nkunku enjoys 4.7 touches in the penalty box, and therefore Kolo Muani will be an equal presence in the penalty area as well. 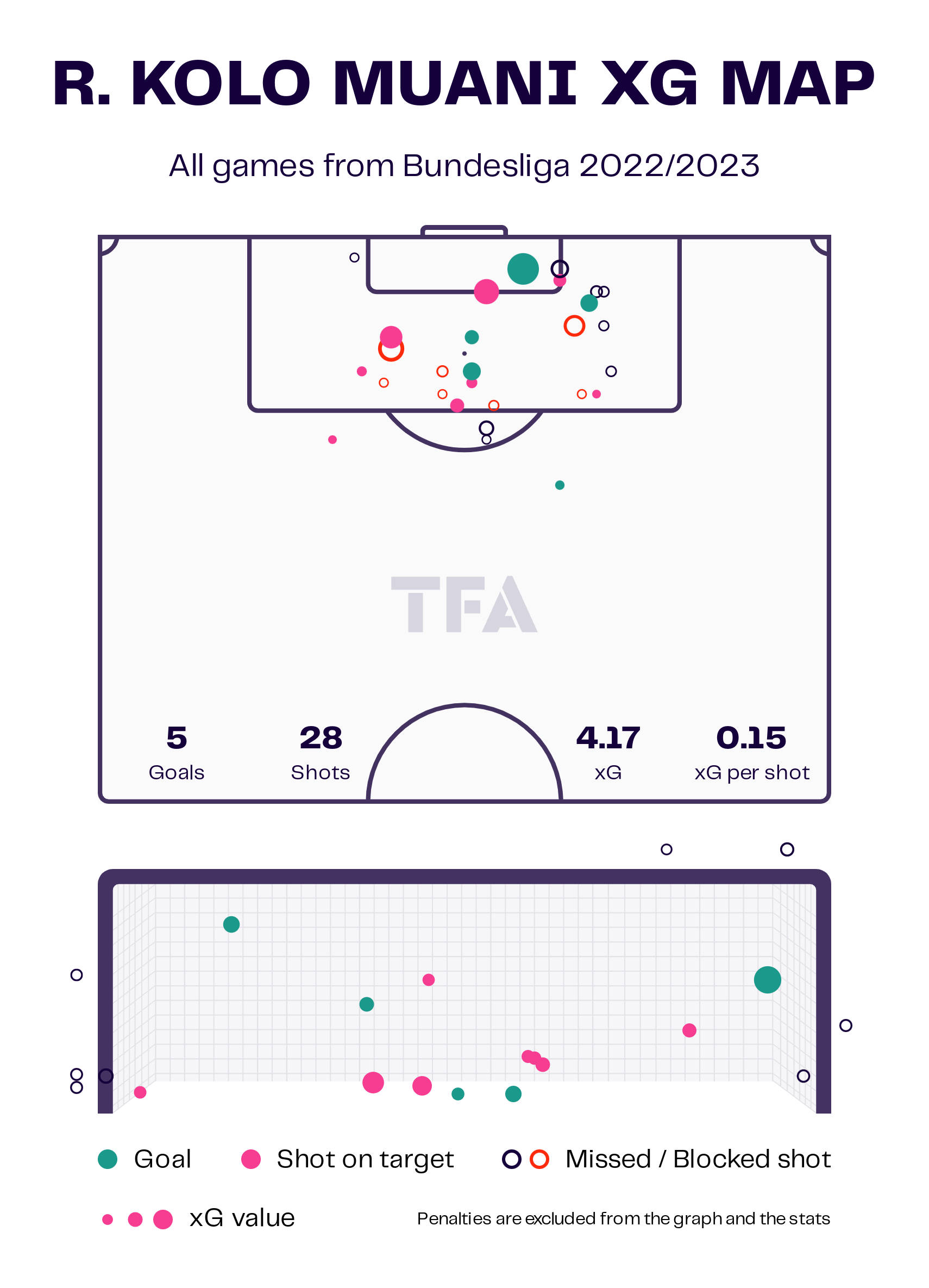 Randal Kolo Muani has five goals to his name in the Bundesliga this season and has scored two goals in the Champions League and a goal in the DFB Pokal as well. He has tried a total of 28 shots this season, and 24 of them were from inside the penalty box. Of the 28 shots, 14 were on target, and five were goals. He has scored in his last two games for his club and is in terrific form. The 23-year-old plays around two shots per game with 51.2% on target, compared to Nkunku’s 2.85 shots per game with 44.2% accuracy. 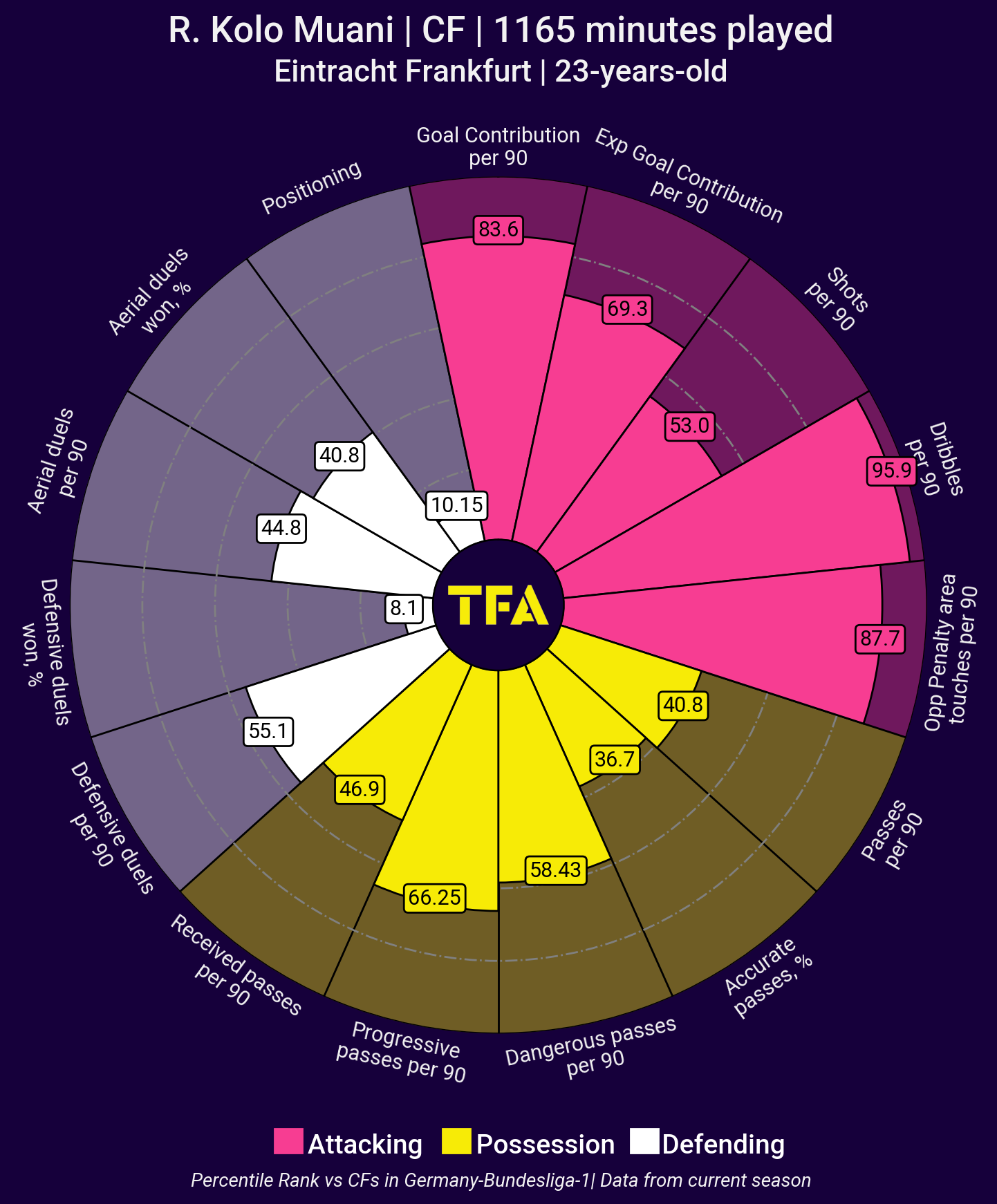 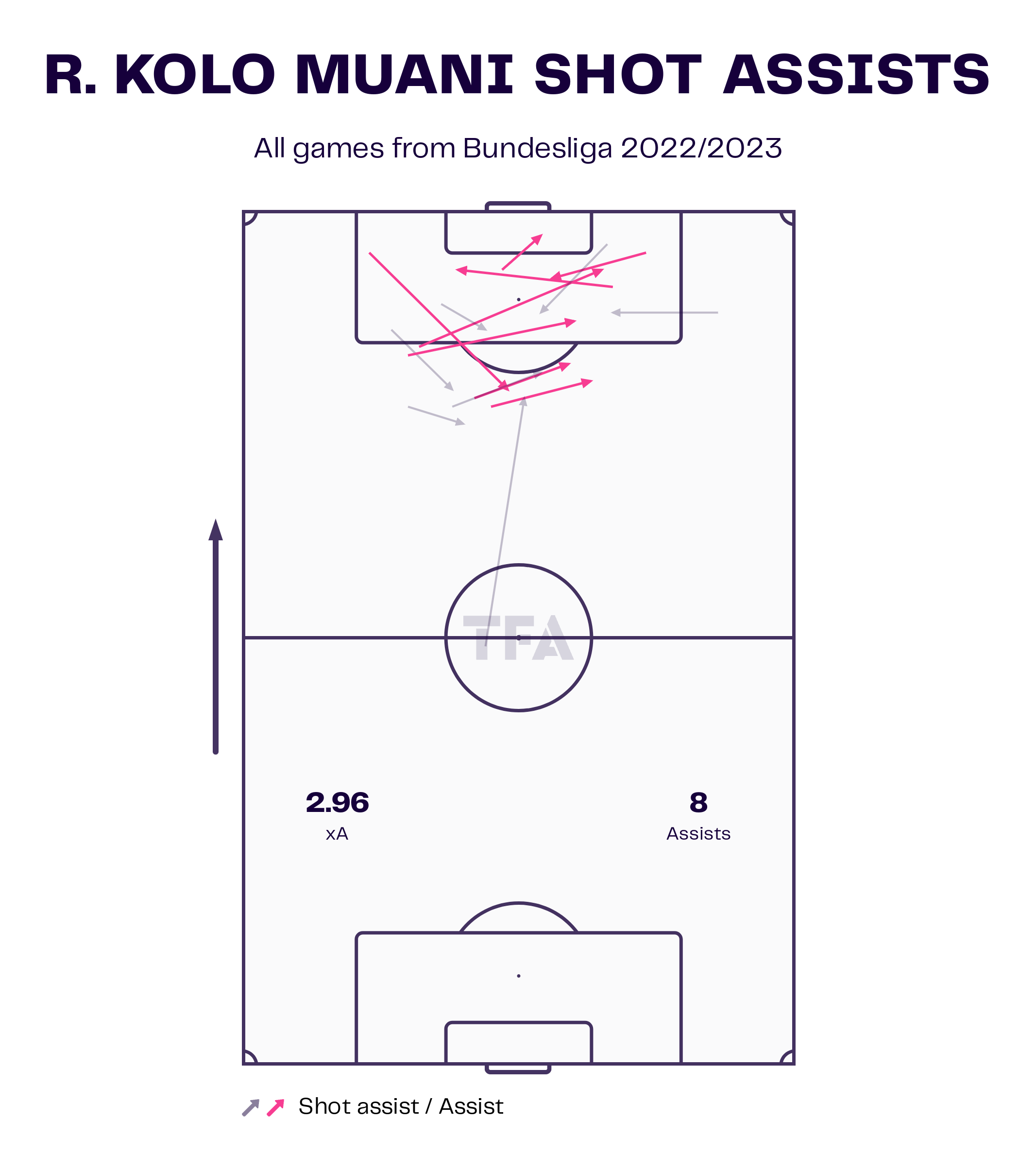 The Frenchman has nine assists this season in the Bundesliga and is the player with the most assists in the league. He makes around 0.92 shot assists per game on average and has invariably found the final pass for Eintracht Frankfurt. He also makes around two passes into the penalty area per game with 60% accuracy. 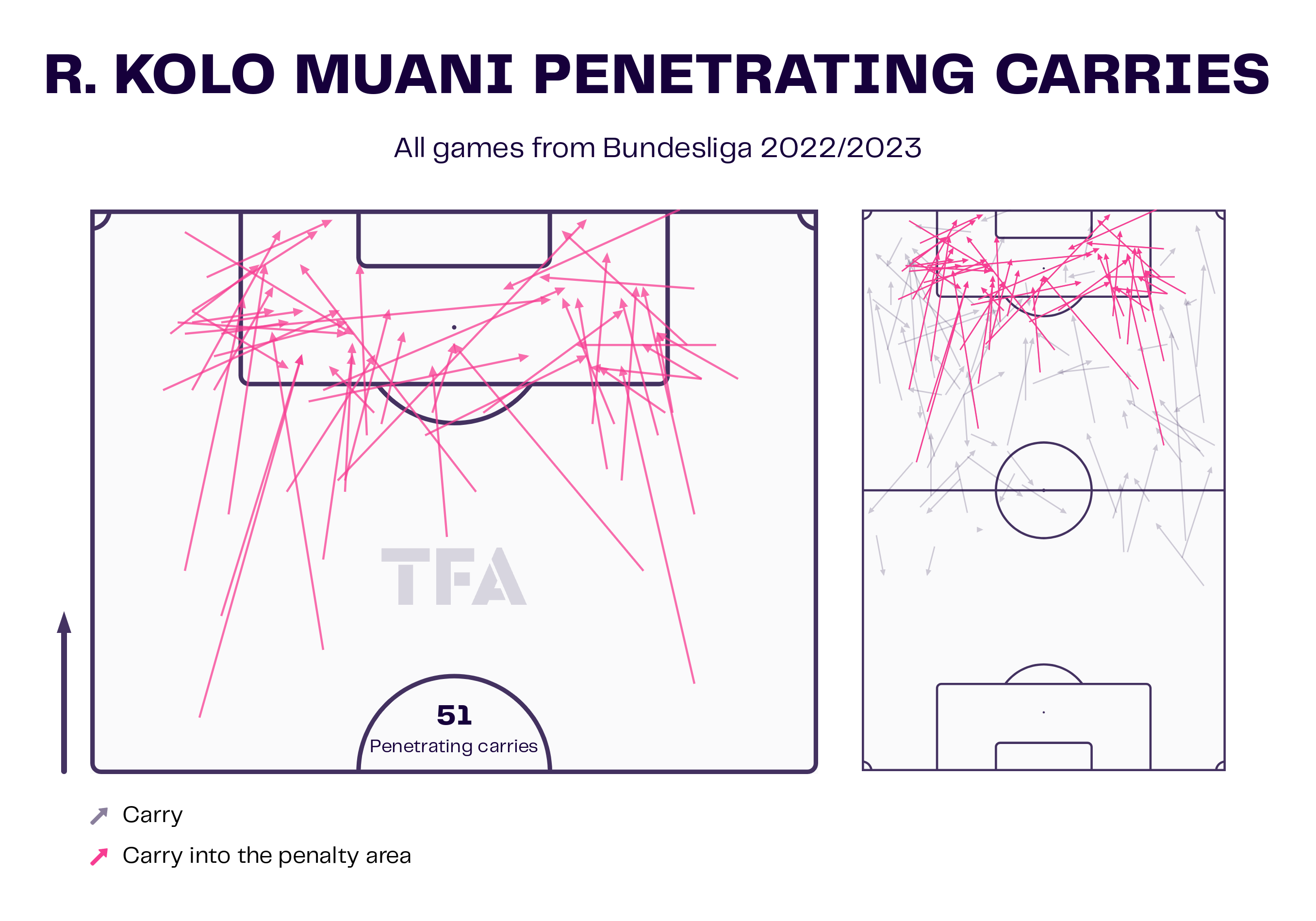 Another great quality of Kolo Muani is his dribbling skills. He has made 51 penetrating carries this season and averages 7.26 dribbles per game with a 52.5% success rate. From the above viz, we can see how he makes long dribbles, penetrates defensive lines, and creates goal-scoring opportunities. The 23-year-old makes use of the width of the ground and runs into the penalty area with the ball at his feet. He makes around 3.44 progressive runs per game on average as well. 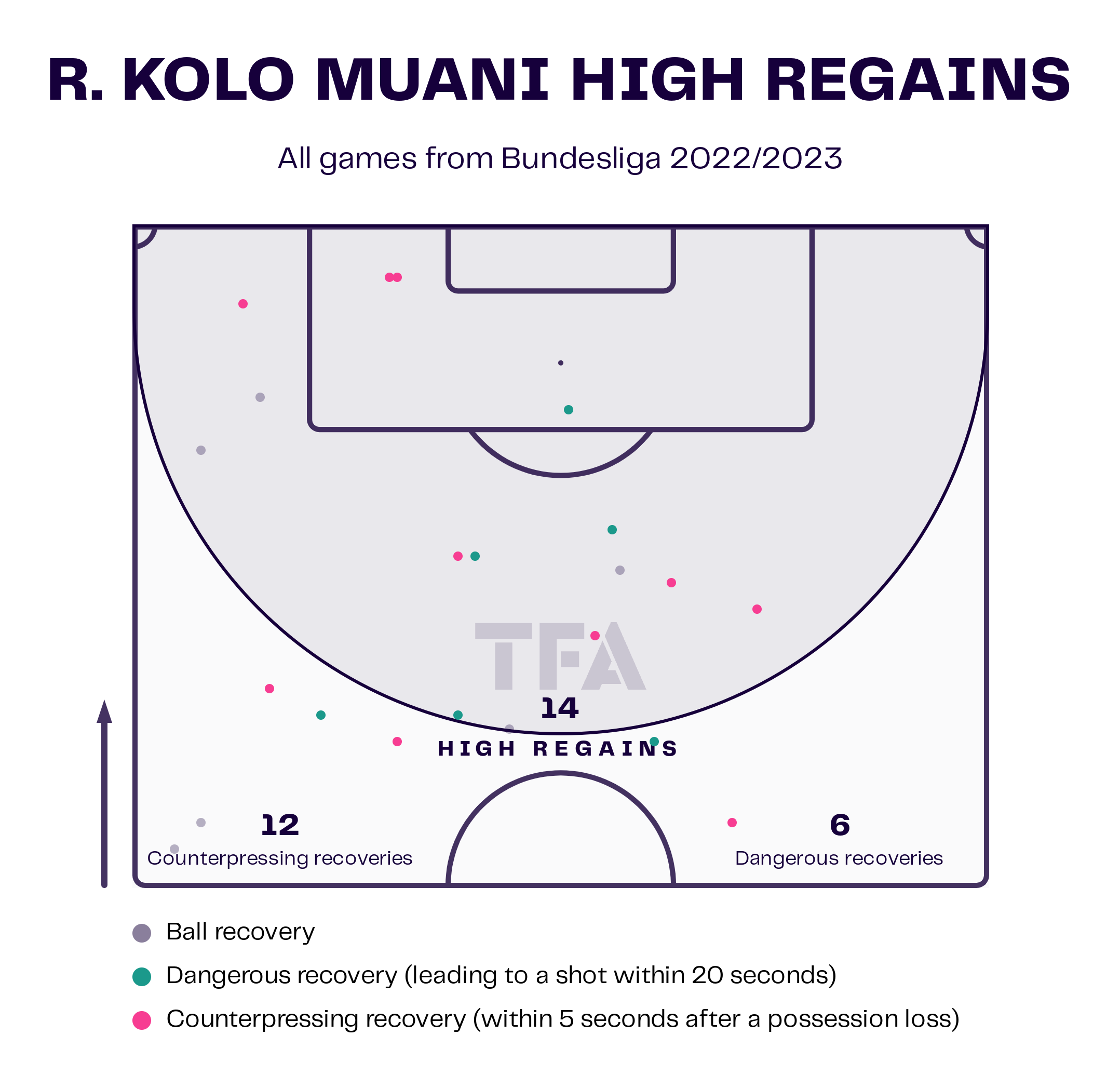 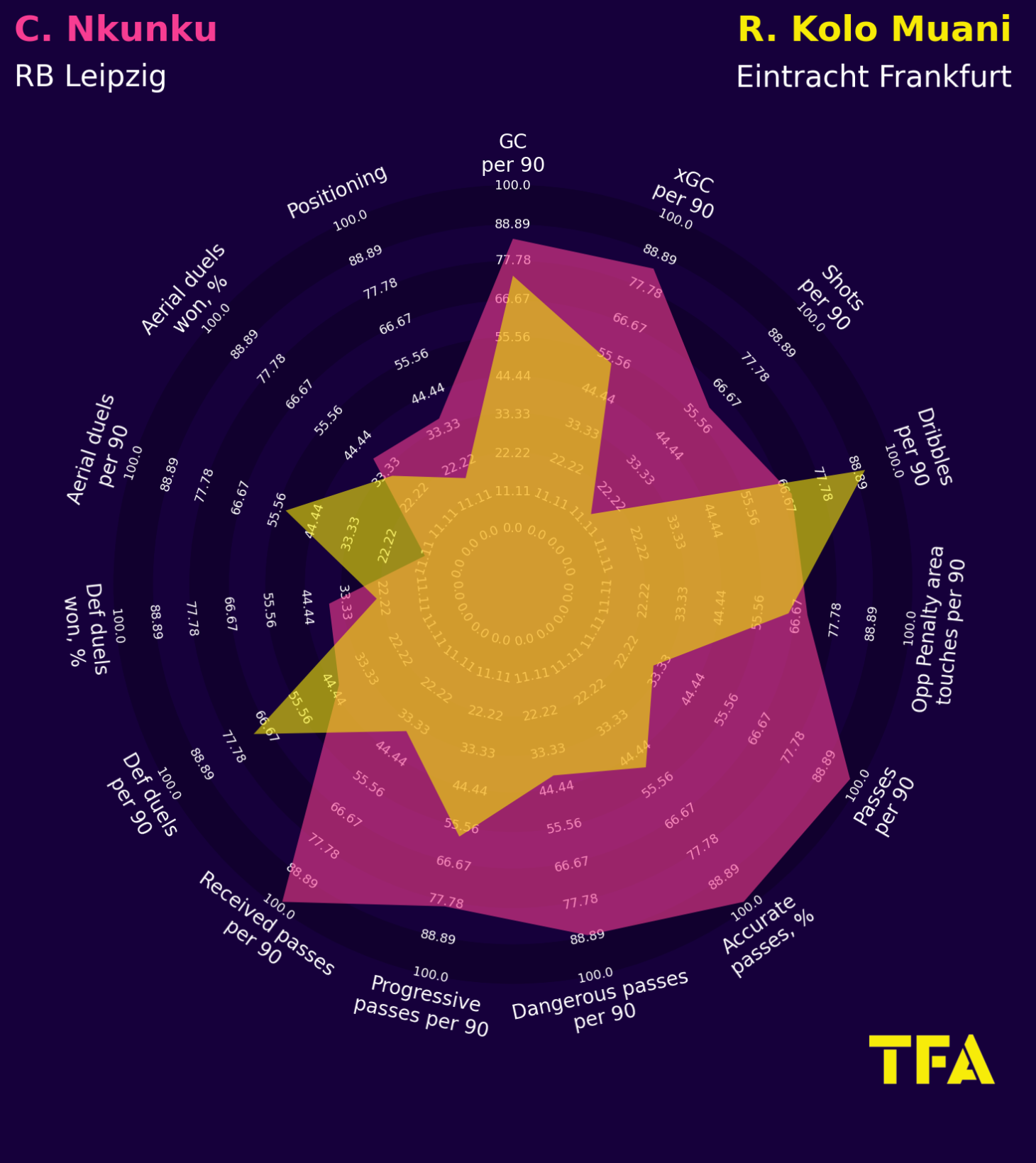 Stats Pack: A draw between Germany and Hungary in Euro 2021...

FOOTBALL WAGERING MISTAKES YOU SHOULD AVOID

The Data: Berlin winner in game with Fürth