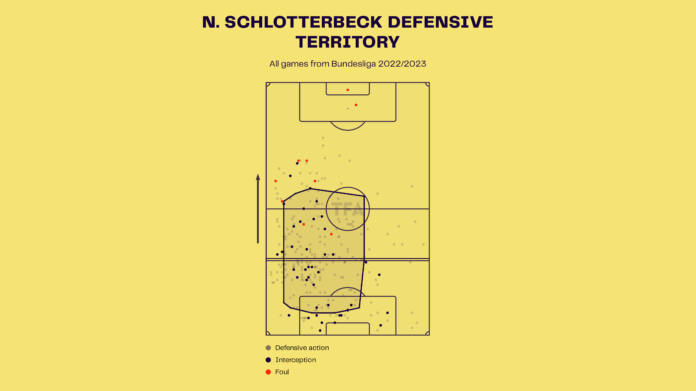 Borussia Dortmund signed many players this summer, and one of the brightest talents they signed is the 22-year-old Nico Schlotterbeck. The former Freiburg player has been praised all over Germany for his performance for the team, and it is fair to say that the youngster has adjusted well to his new club in the Bundesliga. He has become a starter in Edin Terzic’s side, and along with Niklas Sule and Mats Hummels, he is building a formidable backline for Borussia Dortmund. We take a look at some stats to understand how Nico Schlotterbeck has provided stability at the back for Borussia Dortmund. 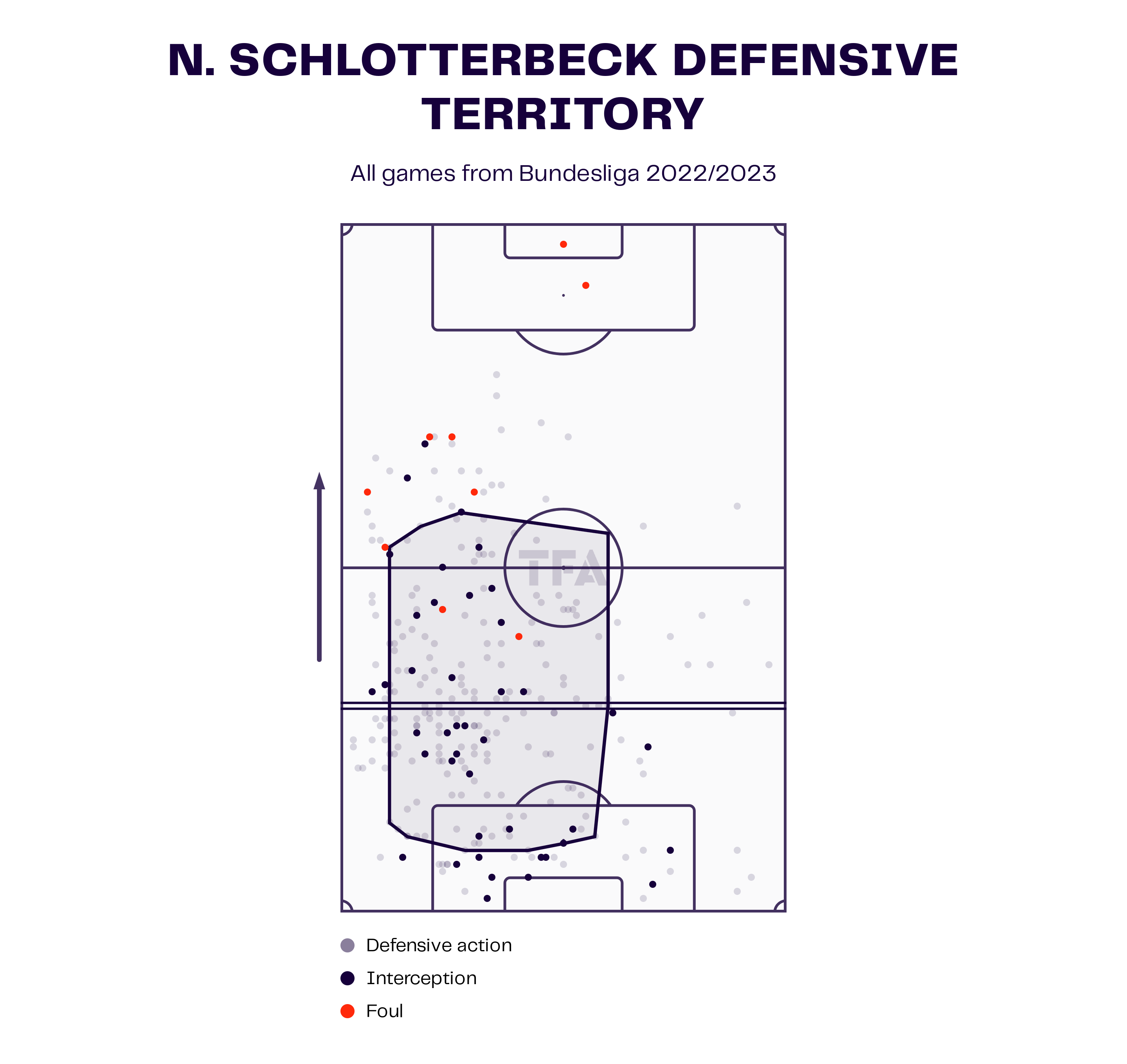 Nico Schlotterbeck has been a fantastic addition to the Dortmund team, and they have only conceded four goals in their last seven games across all competitions. He makes an average of 5.5 defensive duels per game with a 67.5% success rate and 4.95 aerial duels with a 59.7% success rate. The 22-year-old makes 5.57 interceptions per game on average and wins 2.75 loose balls per game as well. His presence has made the backline more physical, and his tall presence has helped them aerially as well. 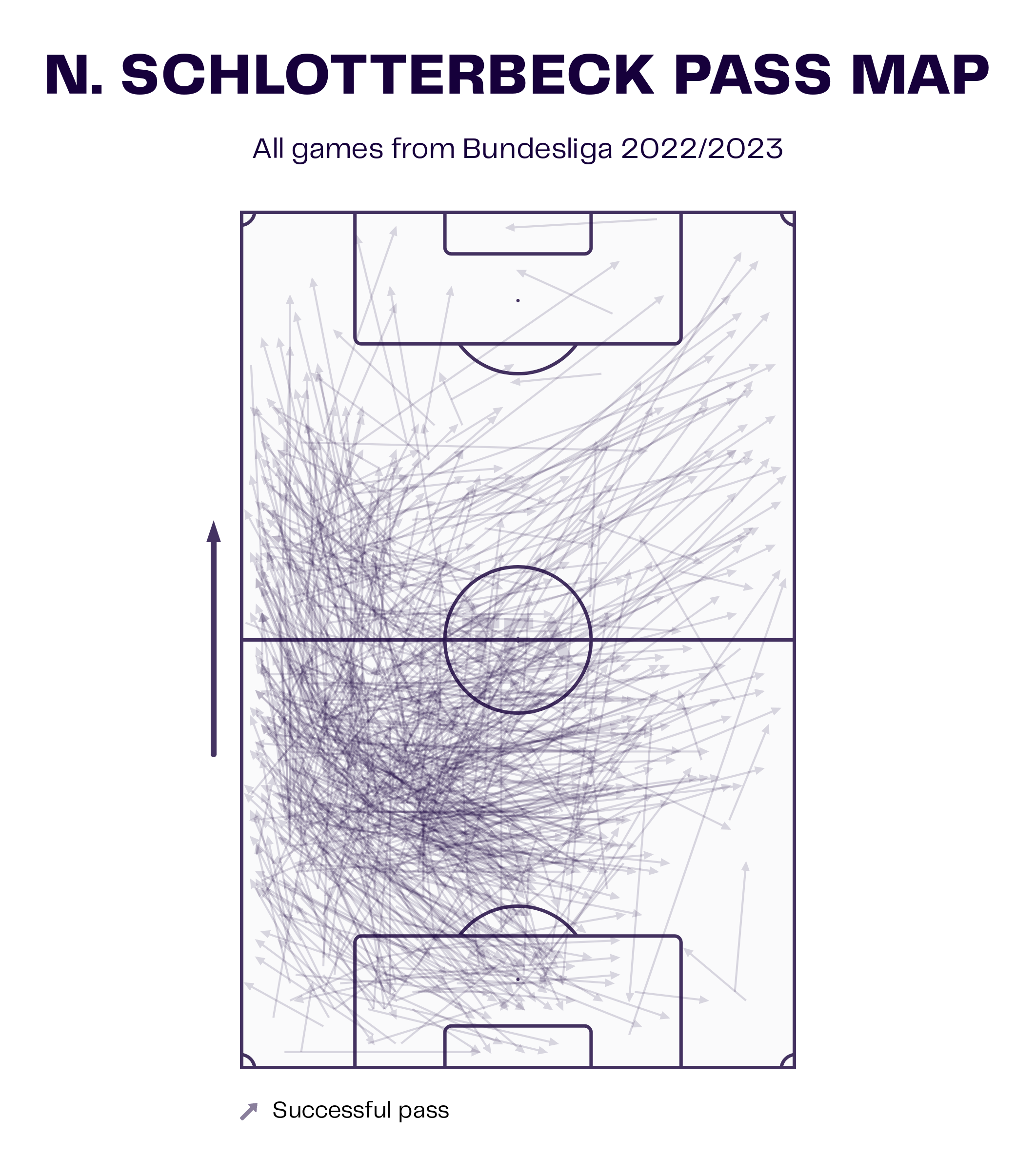 The German defender has a really good pass completion record. He has a pass success rate of 89.2% and makes 65.44 passes per game. The central defender also makes an average of 8.94 passes into the final third with 76.2% accuracy, which is great for a defender. Furthermore, he averages 1.24 passes to the penalty box with a 38.9% completion rate. He is also very good at switching plays and plays 8.12 long passes per game with 60.2% accuracy. These values are good enough for a midfielder, and Dortmund has found a unique talent with good distribution skills as well. 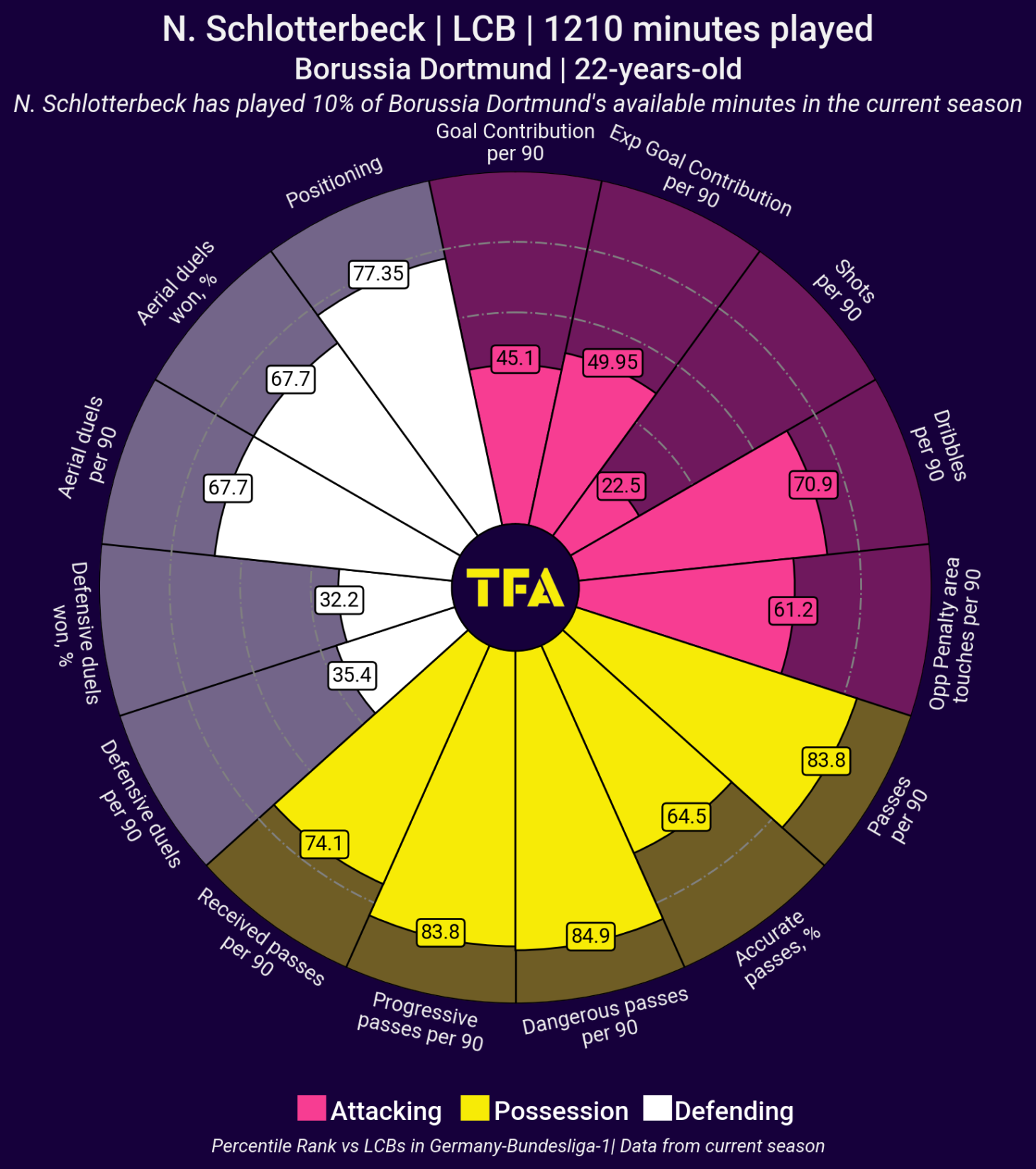 The above viz shows the percentile rank of Nico Schlotterbeck in Bundesliga compared to other left centre-backs. As the pizza chart suggests, he is in the top 84.9 percentile in dangerous passes and the top 83.8 percentile when it comes to progressive passes as well. The 22-year-old also makes some good entrances into the attacking third with his good progressive runs as well. 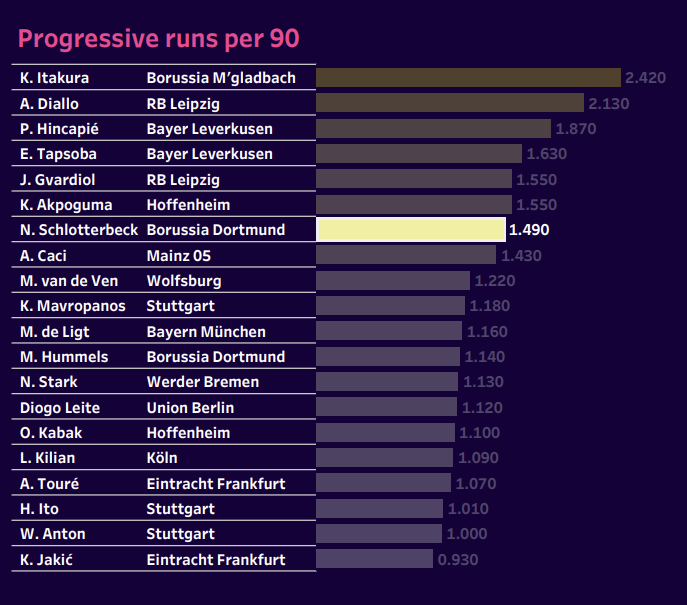 Nico Schlotterbeck usually plays as a left centre-back, and his ability to carry the ball forward and find the right pass makes him very unique and helps the team in various aspects as well. The German International averages 1.86 progressive runs per game. These runs help the team to play out from the back when the midfielders are marked. As Dortmund often deploys a high line, he sits high and finds direct passes to the forwards quite often. Schlotterbeck also attempts 0.34 shots per game but hasn’t scored yet for Dortmund. 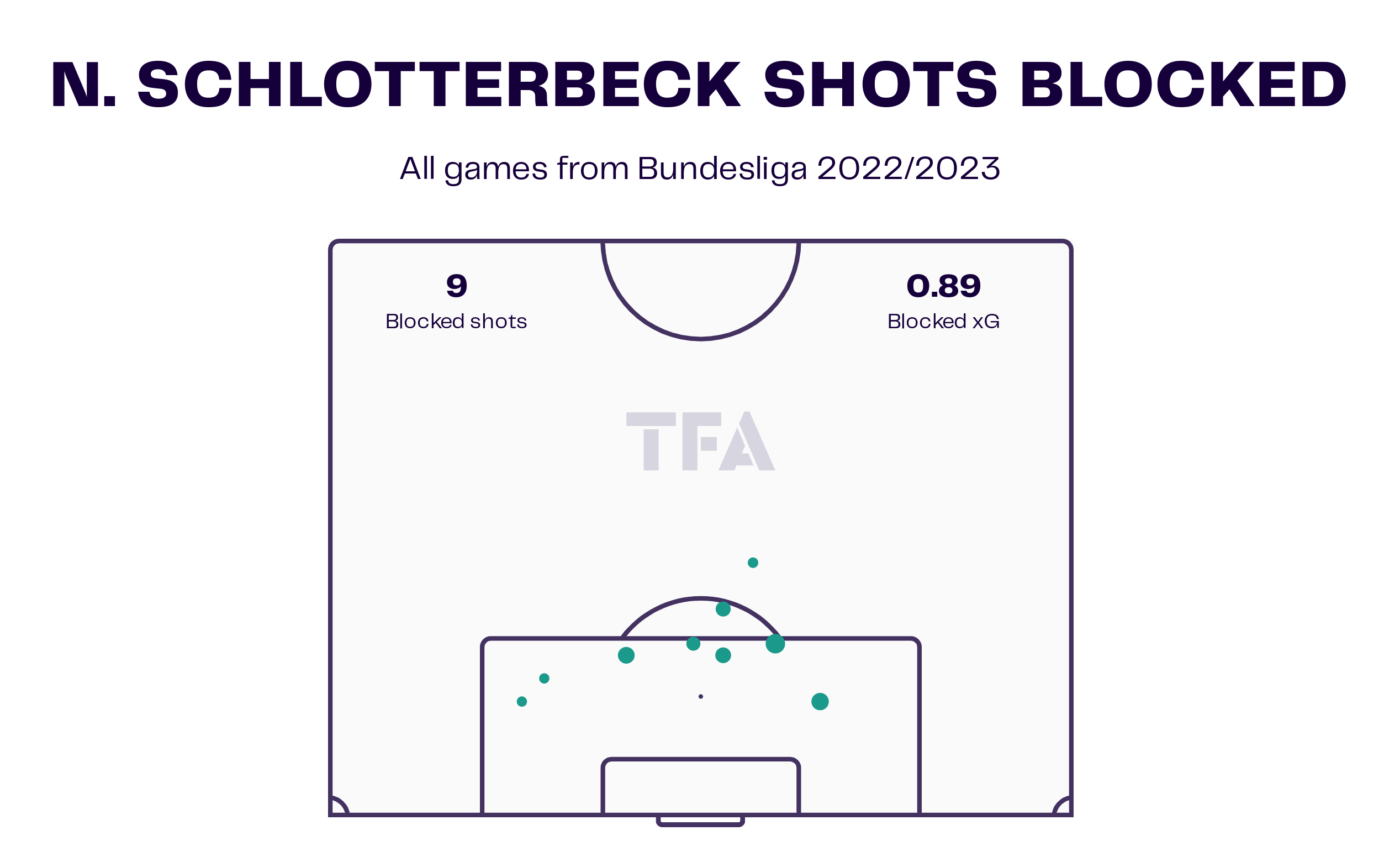 Schlotterbeck has blocked nine shots so far in the Bundesliga this season. He is tall and strong, and he is good at passing as well. He makes 1.31 sliding tackles per game and 2.27 clearances per game as well. The 22-year-old also recovers possession 14.52 times per game for them on average.

When Nico Schlotterbeck was in Freiburg, he was already labelled as one to watch in the future. The question, however, was: can he do it on the big stage? His numbers speak for themselves, and with his strong physique, ball-carrying abilities, and accurate passing, he has launched himself into the biggest of stages. Whether he will seek a move away from Dortmund in the future is yet to be seen, but he has proven himself capable of playing for one of the biggest clubs in the world.

The Statistics: München winners in tough against Bull Leipzig