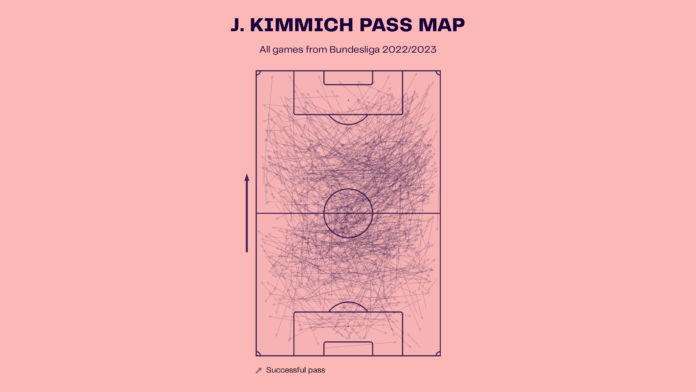 Joshua Kimmich was a young warrior under Pep Guardiola when he signed the German from Vfb Stuttgart in 2015. He has been an integral part of Bayern Munich ever since. He has played as a defensive midfielder, a central midfielder, a right-back, and a centre-back for the Bavarian club. The 27-year-old is a bundle of energy and emotions and dictates the game for the Bundesliga champions. Over the years, he has become a mature, creative, and energetic midfielder and has become one of the most irreplaceable players at Allianz Arena. His ability to find the right pass, make the important tackles, and come up with brilliant free kicks when needed has paved the way for him to become a legend at this club.

We take a look at some stats to understand why Joshua Kimmich is the most important player for Bayern Munich. 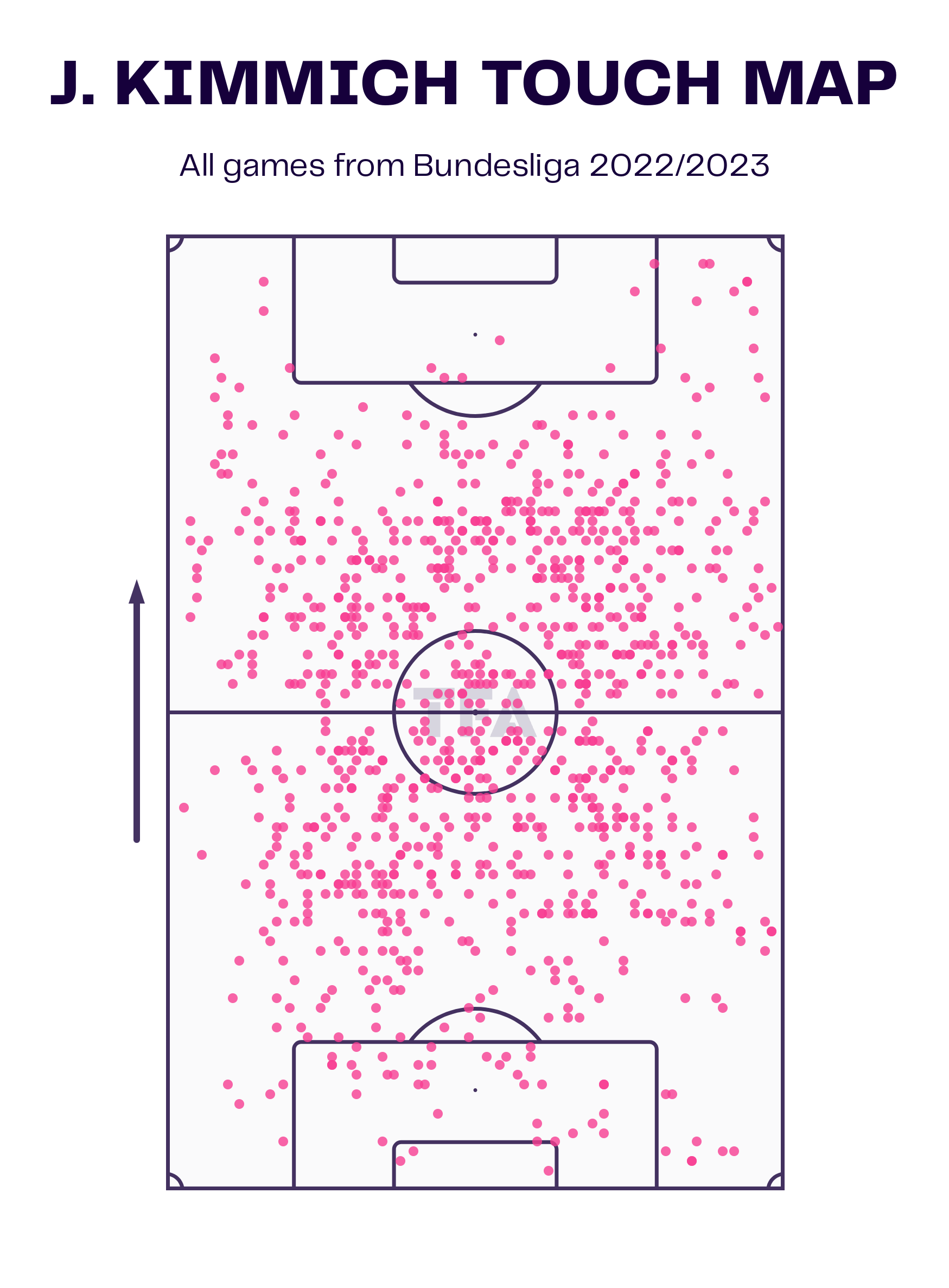 Joshua Kimmich usually plays as a central midfielder or as a defensive midfielder and stays in the middle of the park when the team attacks. He is the fulcrum around which the entire attack operates. The above viz shows the touch map of Kimmich this season in the Bundesliga. We can observe how he likes to occupy the central areas and orchestrate the game. 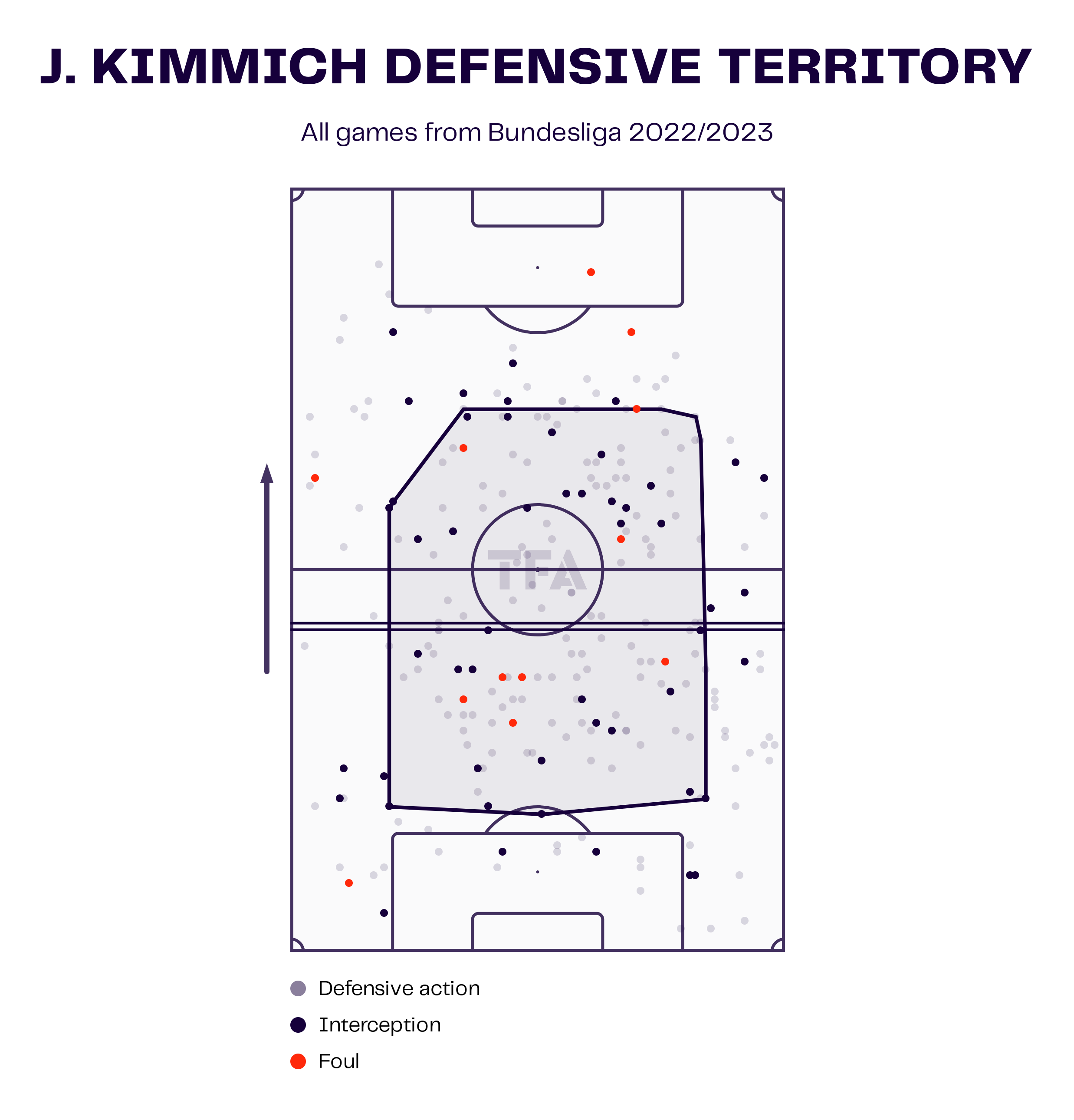 The viz above depicts Joshua Kimmich’s defensive territory. We can see from the visual that he is a constant presence at the centre of the park. He makes some crucial interceptions in the midfield and is a key player in the transition from defence to attack. Kimmich makes an average of 5.42 interceptions per game, with most of them in the midfield. He also makes around 6.29 defensive duels per game, winning 64.9% of them, and makes an average of 2.34 aerial duels as well. 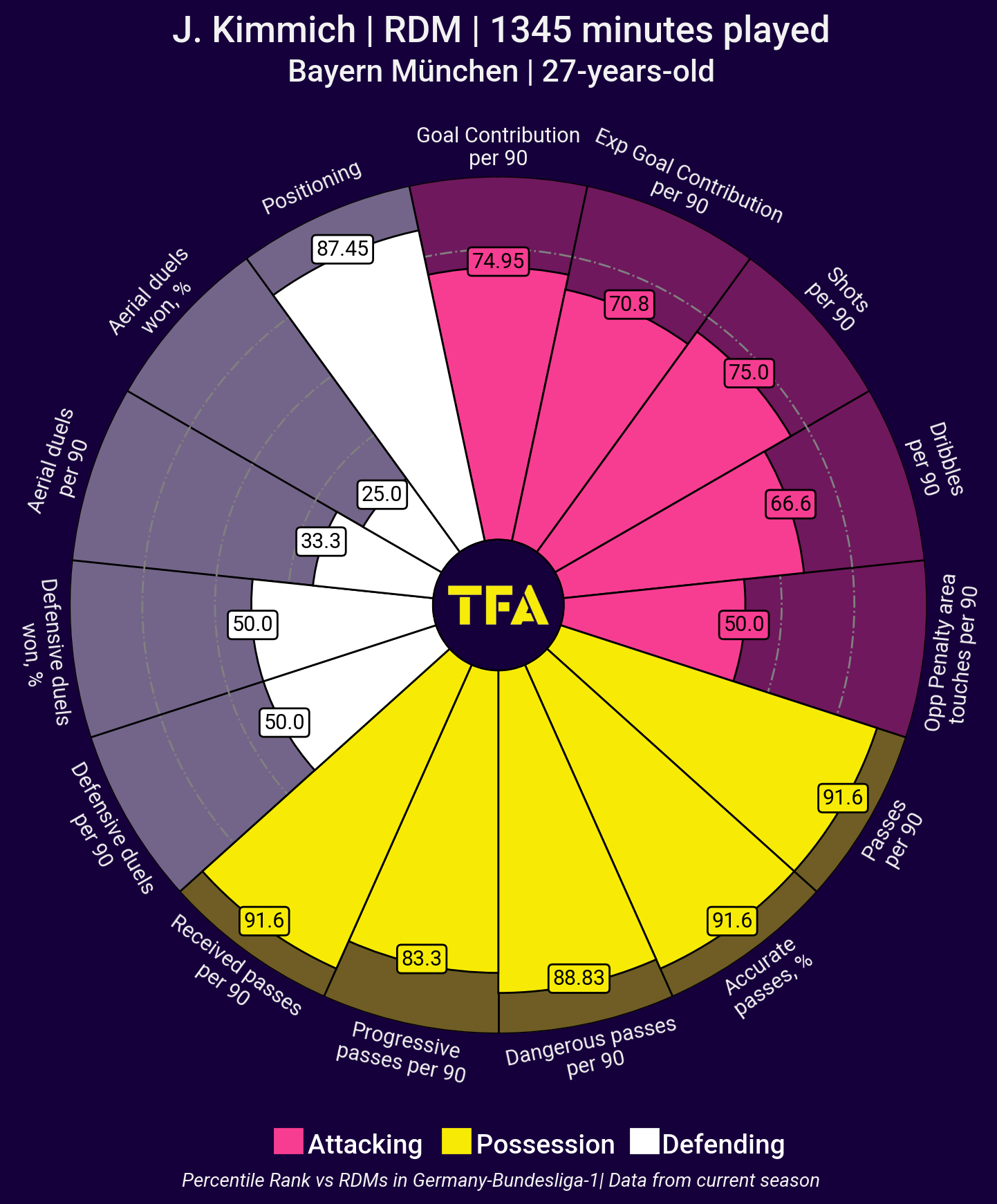 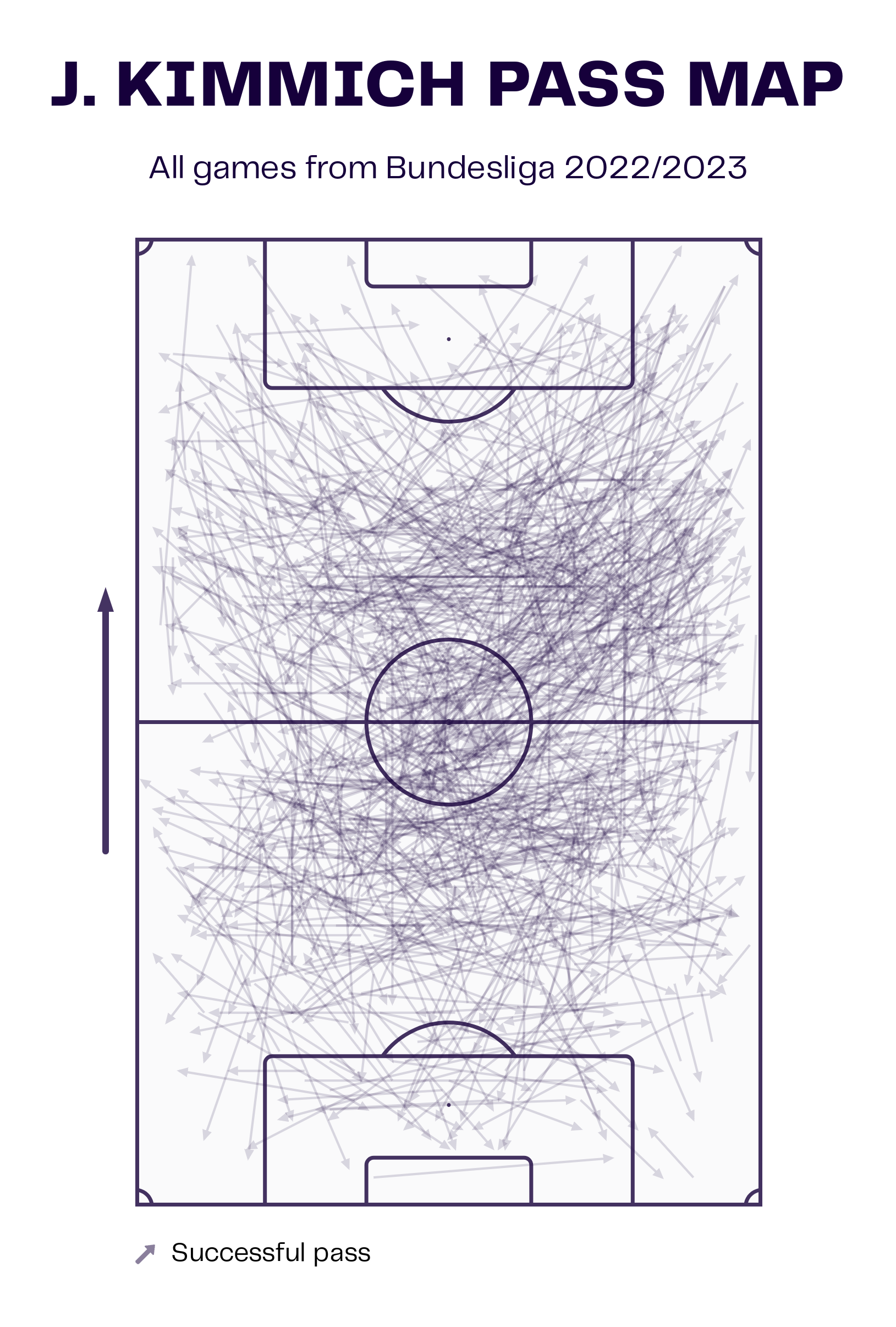 Passing is undeniably Kimmich’s strong suit. He is ranked in the top 91.6 percentile for accurate passes and has a passing accuracy of 89.2%. He plays around 12.91 passes into the final third and has a success rate of 85% as well. Kimmich also plays around 4.48 passes into the final third with 61.2% accuracy. His ability to find the right passes makes him an important piece of the puzzle for Bayern Munich. 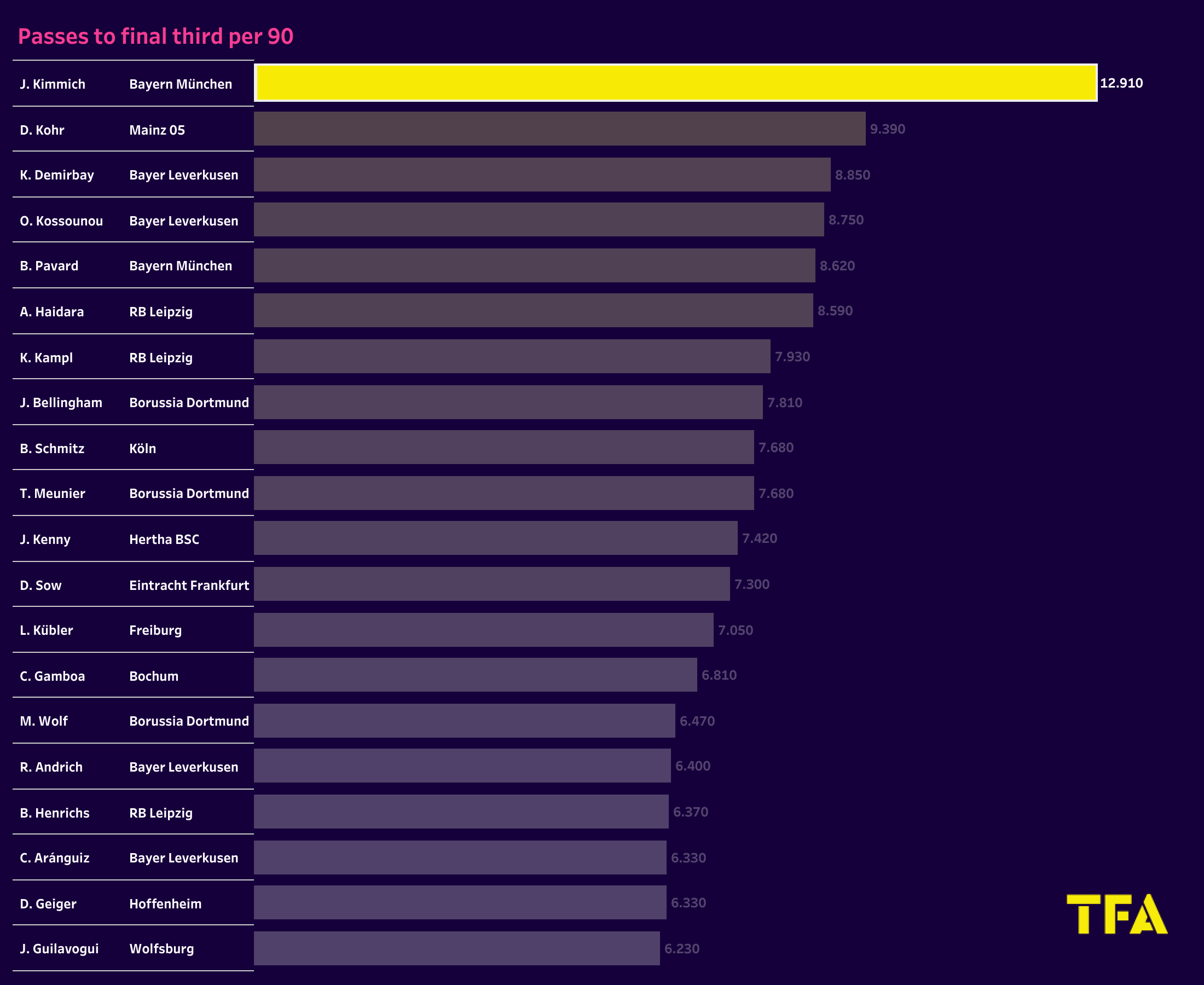 The above viz shows the passes to the final third per 90 by midfielders in the Bundesliga. Joshua Kimmich plays the most passes into the final third in the league and has an efficiency of 85%. Kimmich uses his teammates’ speed to launch counter-attacks while playing through balls into their runs. 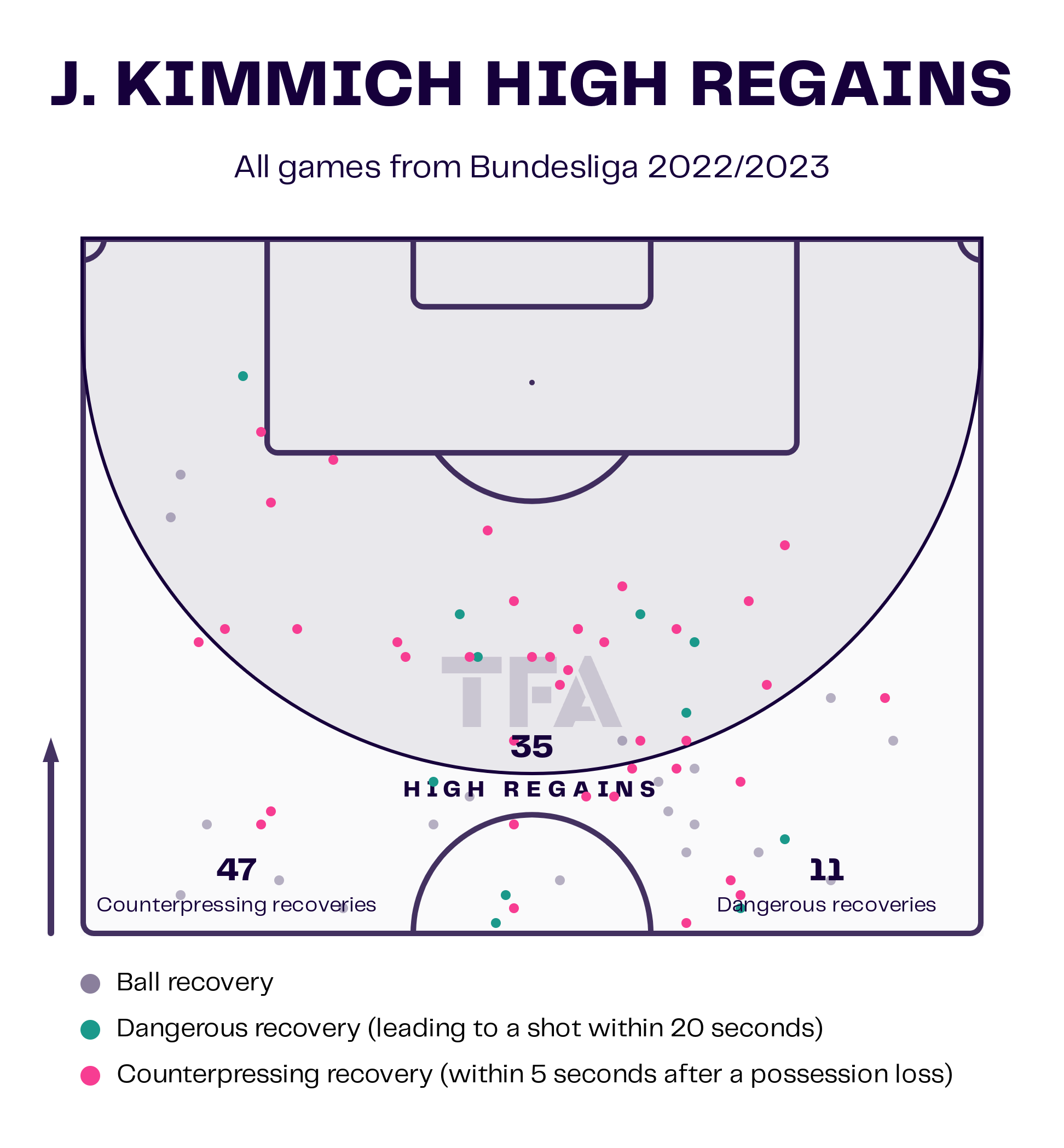 Bayern is a team that presses high, and Kimmich usually sits high in the midfield. He recovers the ball many times in dangerous positions, which allows them to attack. He has made 47 counter-pressing recoveries and 11 dangerous recoveries this season. These recoveries are crucial, as Bayern is quick to launch a counterattack. Kimmich makes 10.51 recoveries per game on average, with 28.7% of them in the attacking half. He also wins around 3.4 loose balls per game.

Joshua Kimmich is one of the best midfielders in the world and has become an important part of Bayern’s midfield. His distribution range, technical ability, and defensive skills make him a special player and the most important player for the Bavarians.