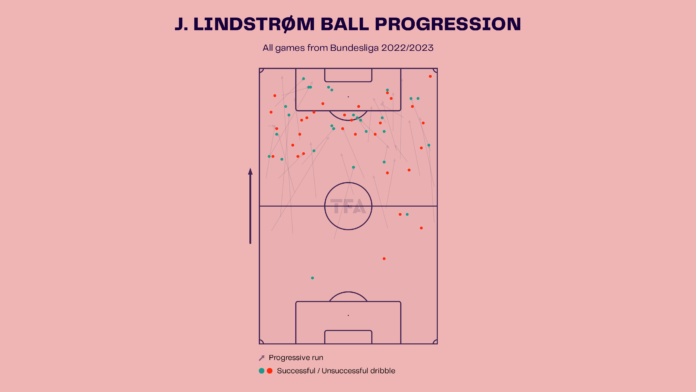 Eintracht Frankfurt signed Jesper Lindstrom in July 2021. The Danish youngster showed glimpses of what he is all about in his first season with five goals and four assists from 29 matches in the Bundesliga. He scored his debut Bundesliga goal against Freiburg, which led to a string of goals as he scored four goals in the last six matches of the first half of the season. He was awarded the Rookie of the Season award for the 2021/22 season for his performance. Lindstrom has picked up where he left off last season and has eight goals and four assists in all competitions. We look at some stats to understand how the youngster has found his feet in the Bundesliga. 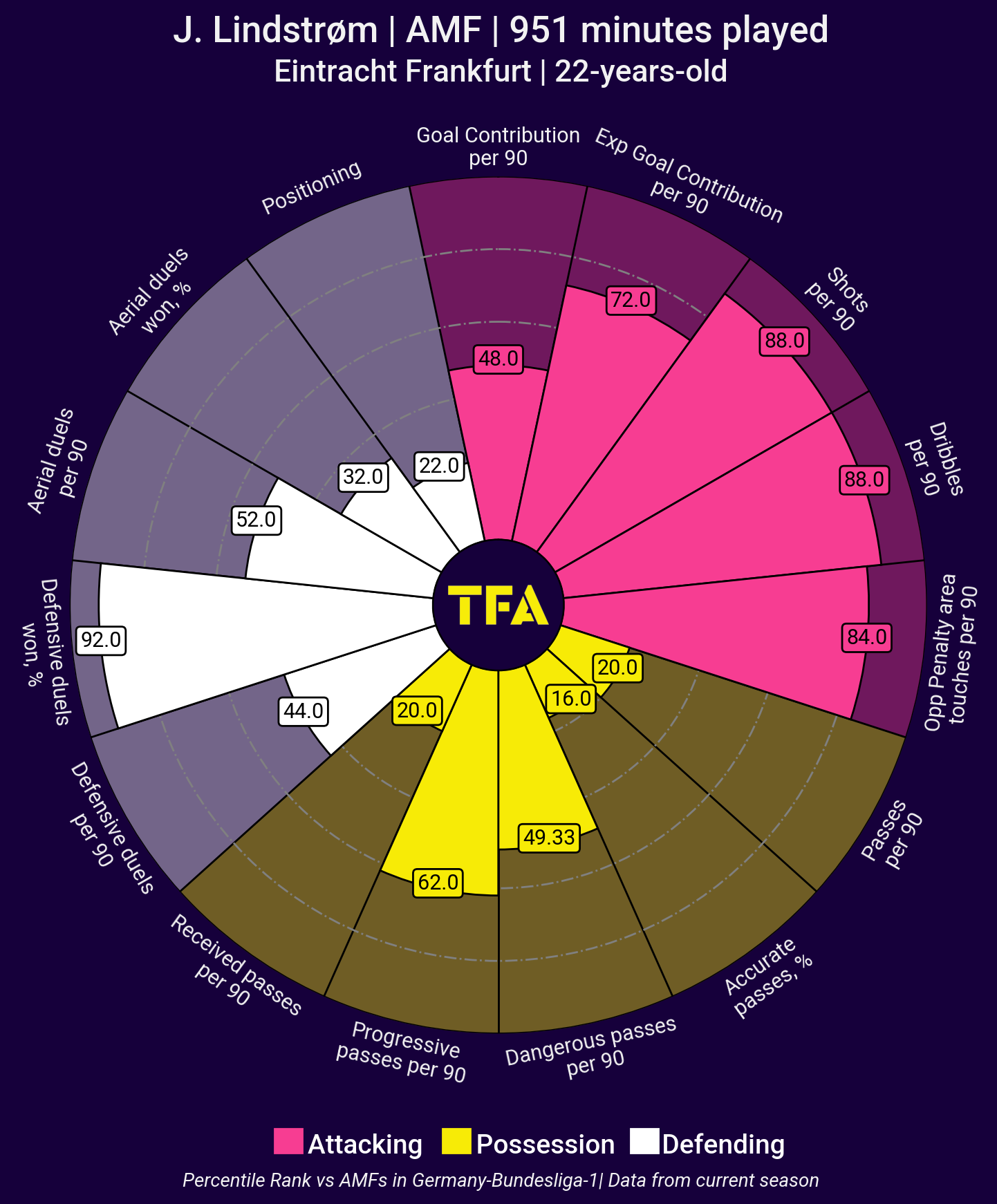 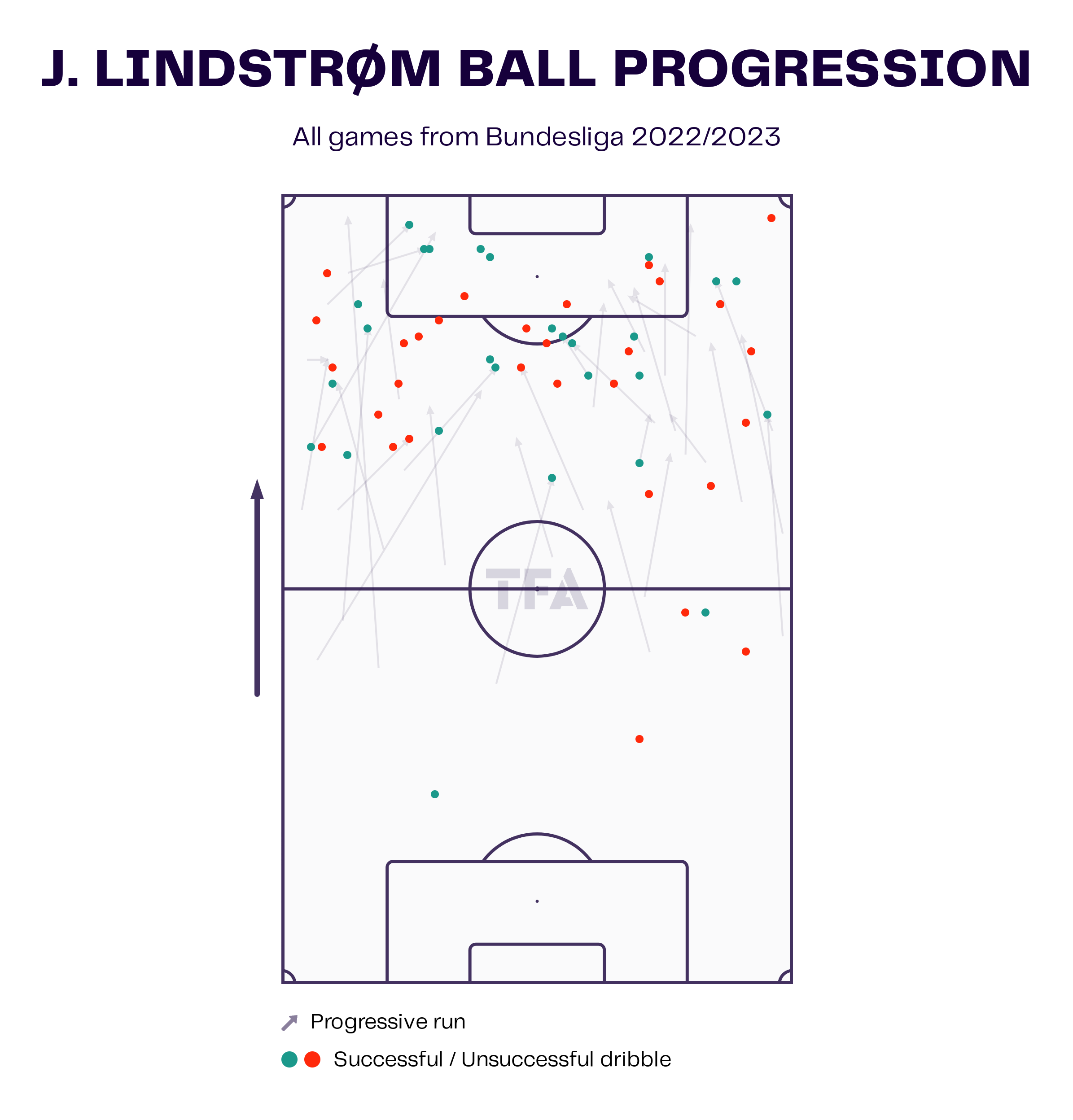 Dribbling is undoubtedly Jesper Lindstrom’s best quality. The 22-year-old is fantastic with the ball at his feet and makes some buccaneering runs, splitting apart opposition defensive lines. He makes an average of 5.11 dribbles per game with a 45.4% success rate. The 22-year-old is a delight to watch as he unleashes his box of trickery to go past players. Lindstrom has great ball control and is fast, which is a combination deadly enough to take on any defender. Apart from these dribbles, Lindstrom also makes an average of 2.68 progressive runs per game. These runs have helped Eintracht Frankfurt immensely in their climb to fourth place. 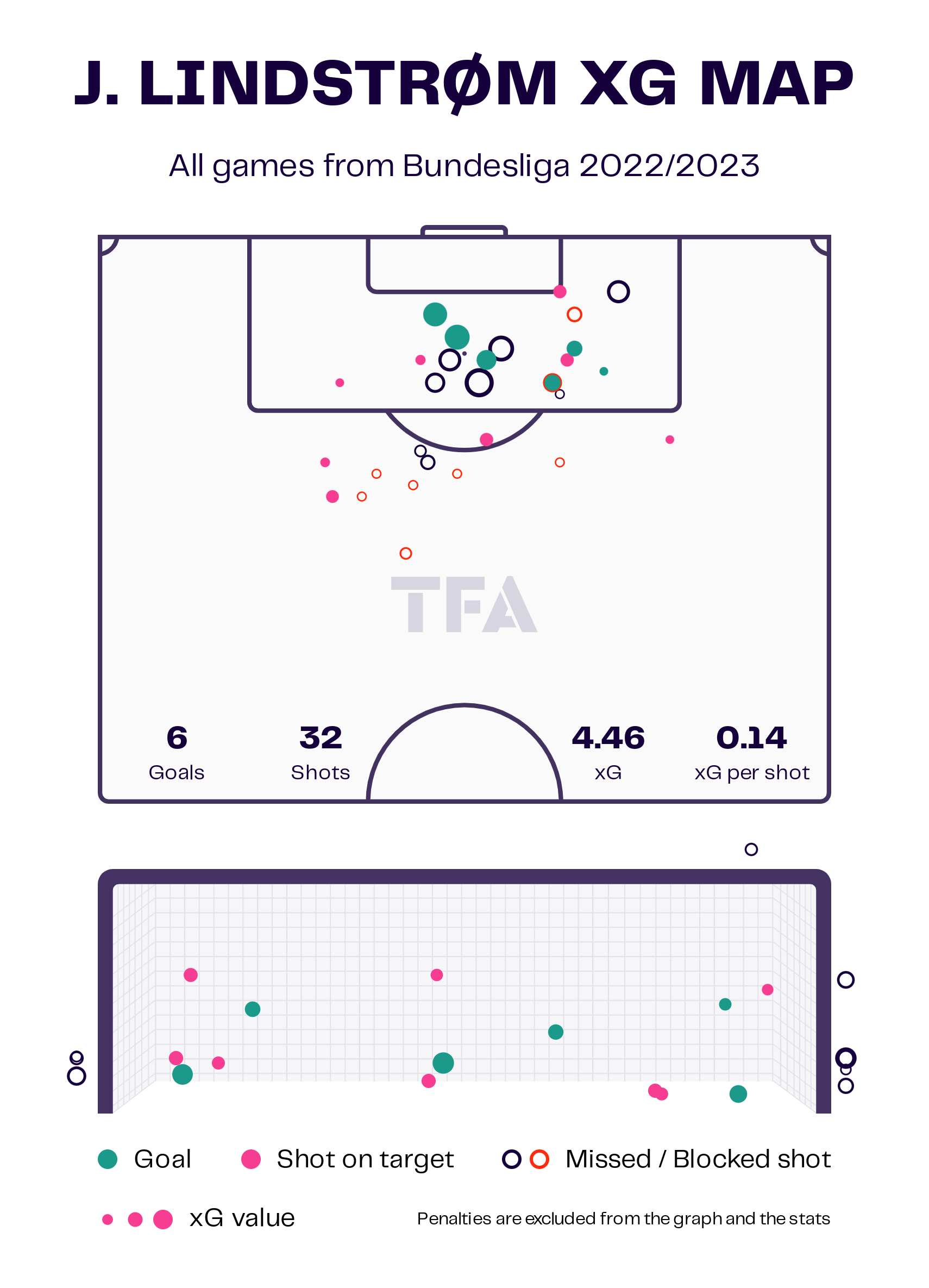 The above visual shows the xG map of Jesper Lindstrom. The 22-year-old has scored six goals this season in the Bundesliga. He has attempted a total of 32 shots, of which 20 were from inside the penalty box. Lindstrom also has 14 shots on target this season, out of which six were converted into goals. Moreover, the youngster has also attempted an average of 2.63 shots per game with 46% accuracy. Lindstrom’s goal-scoring form has helped Frankfurt in their successful season this year. 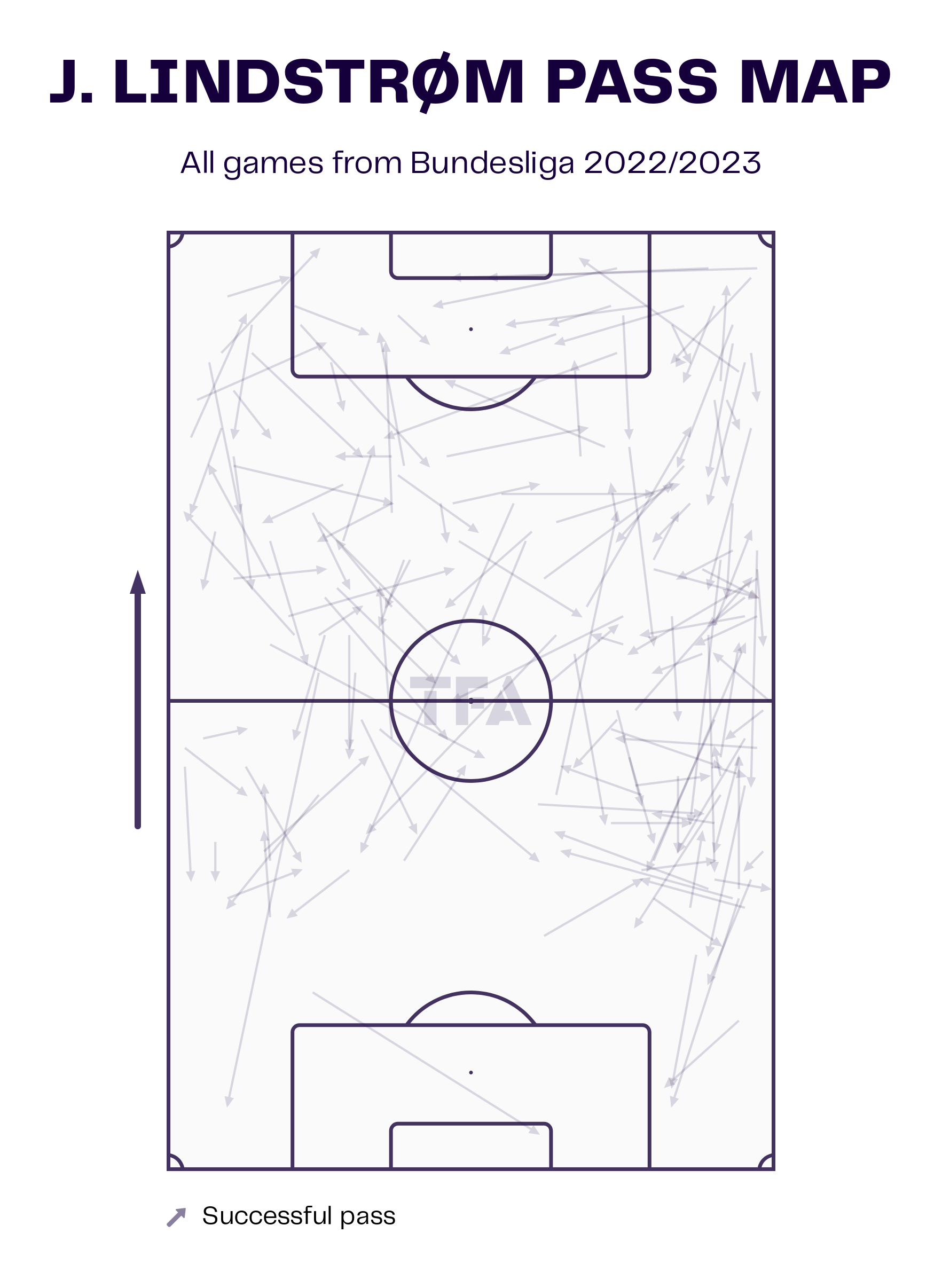 Passing is one area where Lindstrom needs to improve. For an attacking midfielder who is playing for a team playing in the Champions League, his passing figures are not the best. He has a passing accuracy of 73.3% this season and makes around 23 passes per game. Jesper Lindstrom is ranked in the top 16 percentile for accurate passes, which is poor for a midfielder. With all the dribbling he does, it is surprising to see that he only plays an average of 1.26 passes into the final third, and that too with 54.2% accuracy. 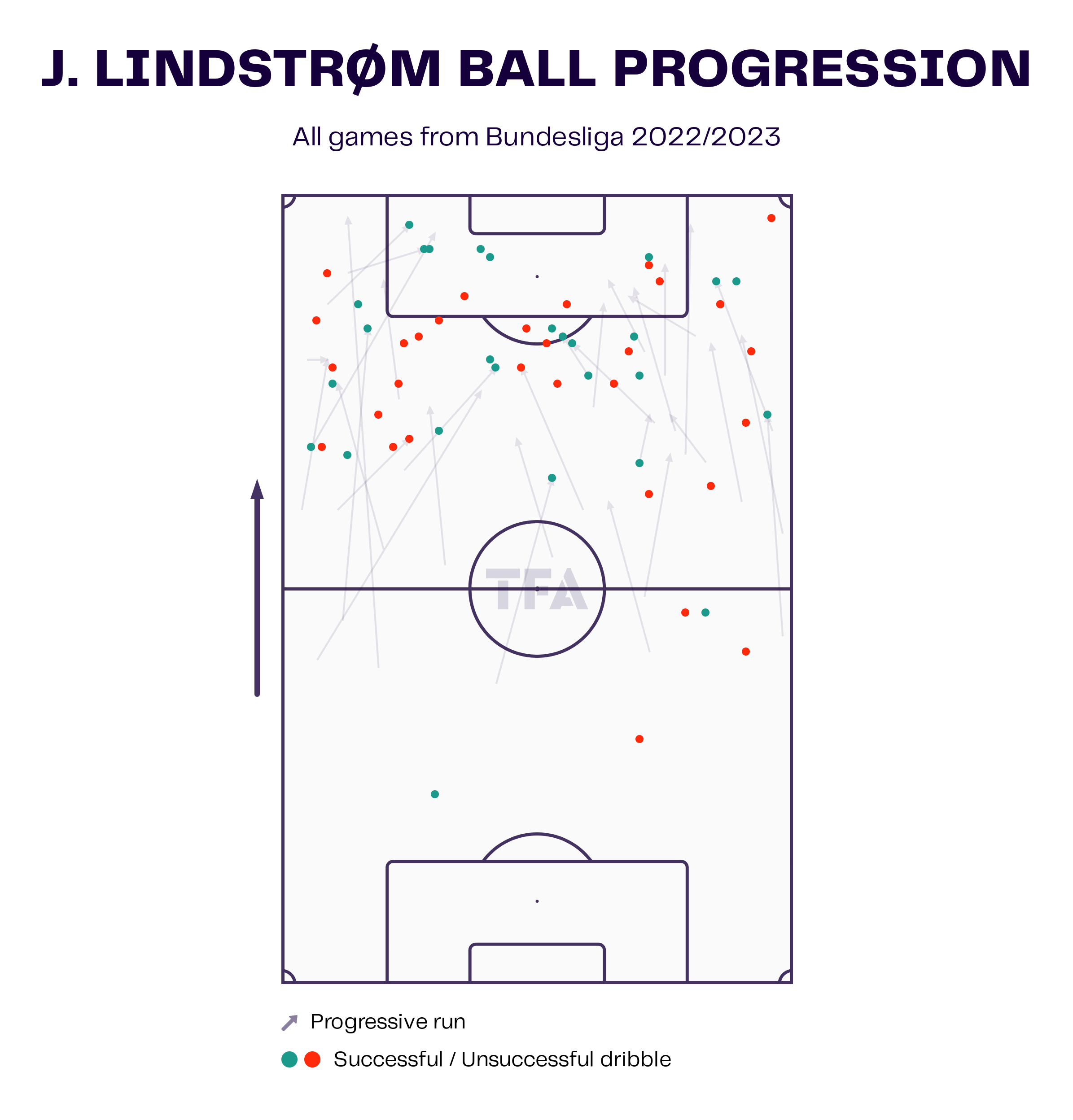 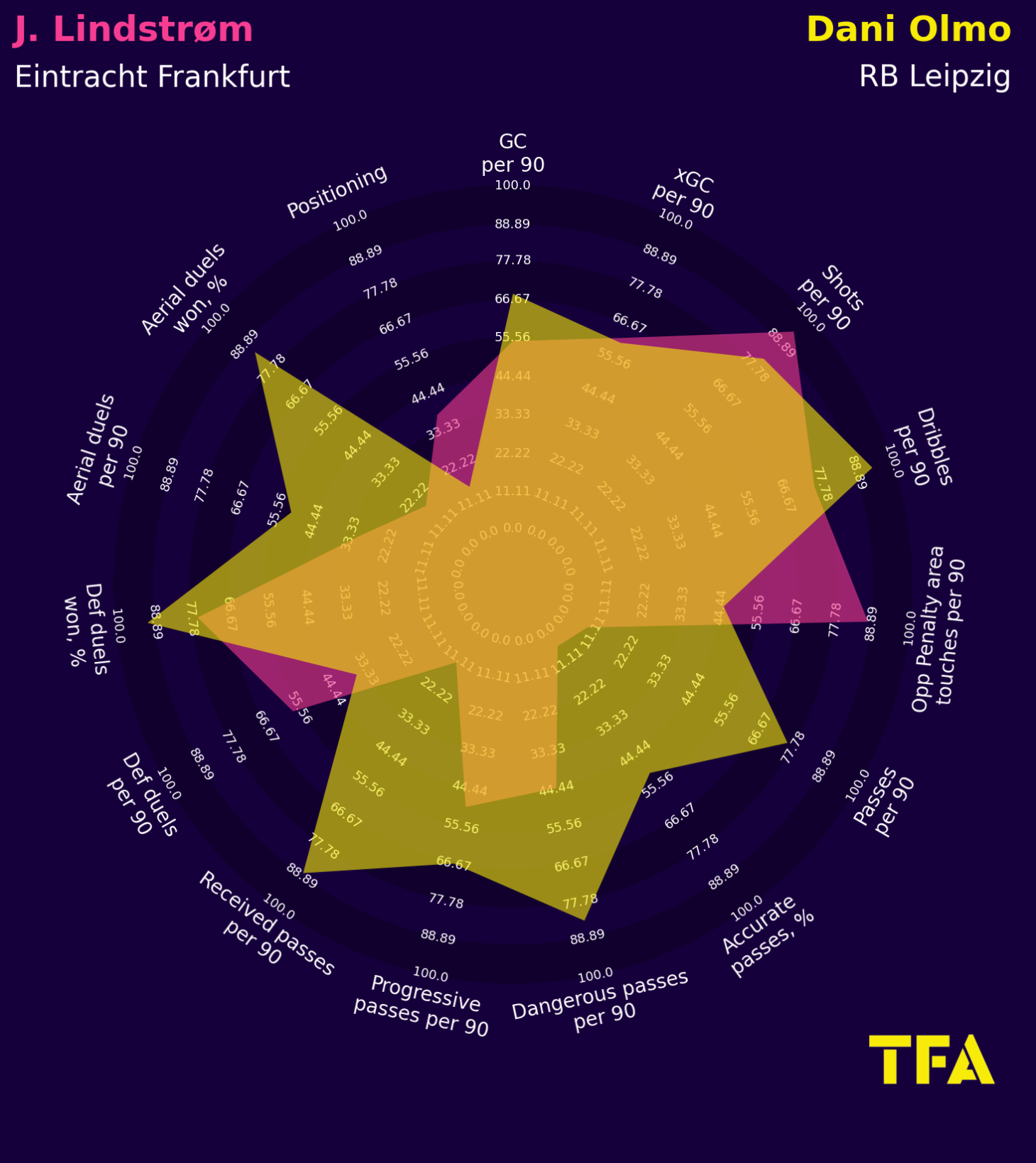 One player Jesper Lindstrom reminds us of is his RB Leipzig rival, Dani Olmo. Like Olmo, Lindstrom is also dynamic and has good control over the ball. They both are good dribblers. The only thing where Lindstrom needs to improve, not just compared to Olmo but generally, is his passing. The above visual shows the comparison of the radars of Jesper Lindstrom and Daniel Olmo. The former enjoys more touches in the penalty box and plays more shots per game, while Olmo is good in every department.

Jesper Lindstrom has fantastically begun his Bundesliga season. He has scored six goals and has two assists to his name. The Danish international is in good form, and his coach Oliver Glasner will expect the youngster to keep up the same level of performance once the season restarts.

West Ham should be blamed for not getting best out of...

Under the microscope: Why is Mathys Tel being referred to as...