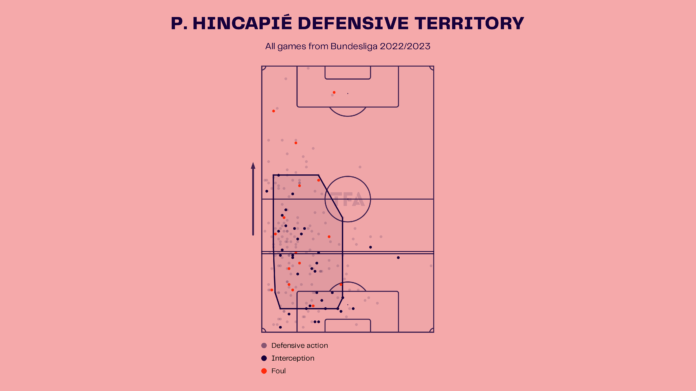 One of the latest names that could be added to the list of talented youngsters emerging from the Bundesliga is the 20-year-old Piero Hincapie. The Ecuadorian international joined Bayer Leverkusen last summer and has been a regular starter ever since. Not only has the youngster impressed his management, but he has also piqued the interest of some Premier League clubs. According to reports, the likes of Chelsea and Tottenham Hotspur are interested in stealing the youngster from Leverkusen. Therefore, we take a look at some of his stats to understand why big clubs in England are fighting to sign the 20-year-old.

Piero Hincapie has made 13 appearances in the Bundesliga this season, starting 11 and coming on as a substitute in two matches. He has also scored a goal for Bayer Leverkusen in the Bundesliga. 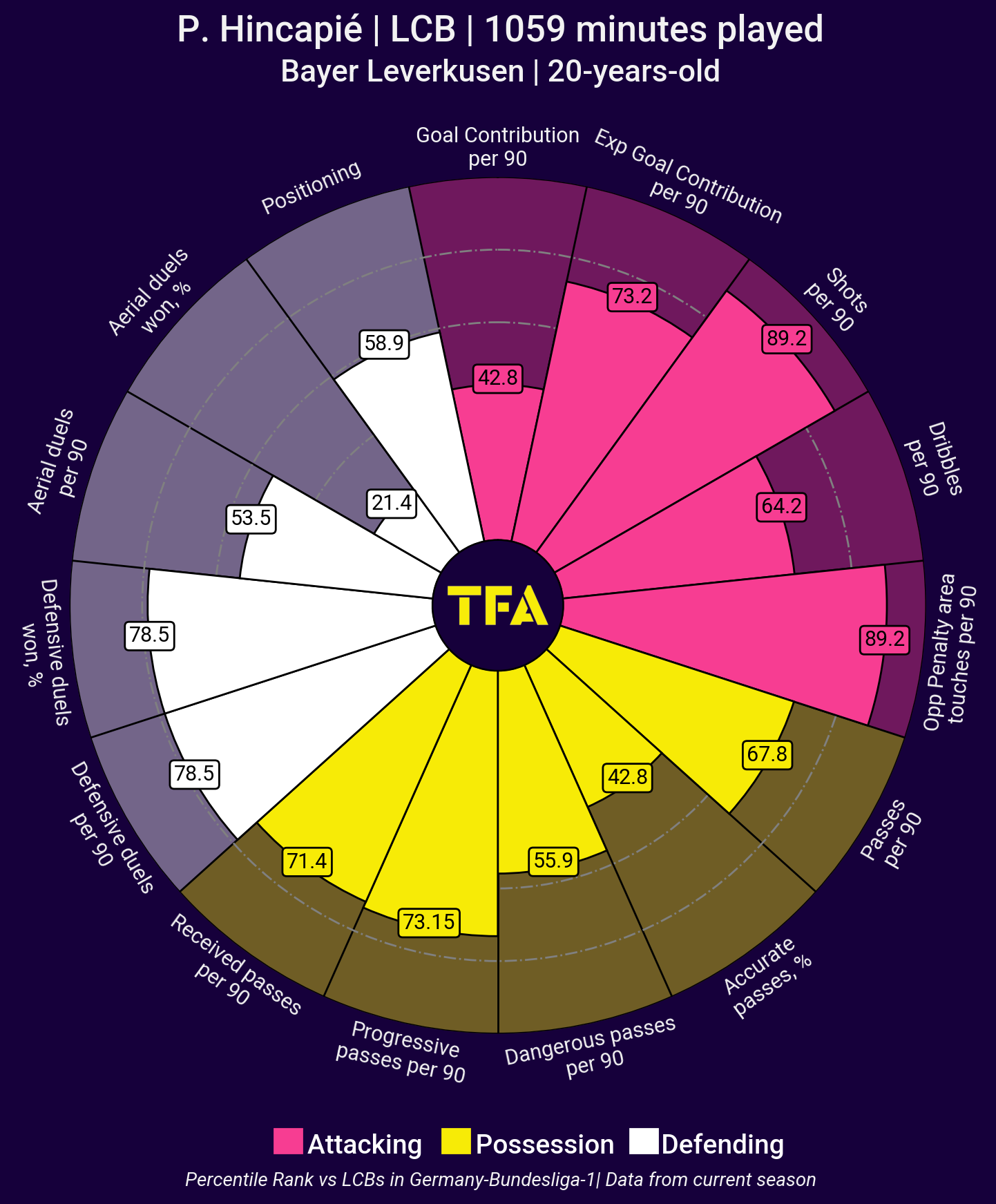 The above visual shows Piero Hincapie’s percentile rank compared to other left centre-backs in the Bundesliga. As we can observe from the pizza chart, Hincapie has good stats in all departments. He has good attacking stats and is ranked in the top 89.2 percentile for shots per 90 minutes and entry into the opposition penalty area. He is a good passer of the ball and has decent stats as well. Defensively, he is ranked in the top 78.5 percentile for defensive duels and the top 53.5 percentile for aerial duels. He is a complete package and has been impressive for Leverkusen this season.

Capable of playing as both a left-back and a left centre-back, Hincapie has cemented his place in Xabi Alonso’s team. The above visual shows his touch map from this season. We can observe that he likes to overlap when he plays as a left-back and occupies a more central position when he plays as a left-centre-back. He anticipates the play well, makes some important tackles, and is impressive in his overlapping as well. 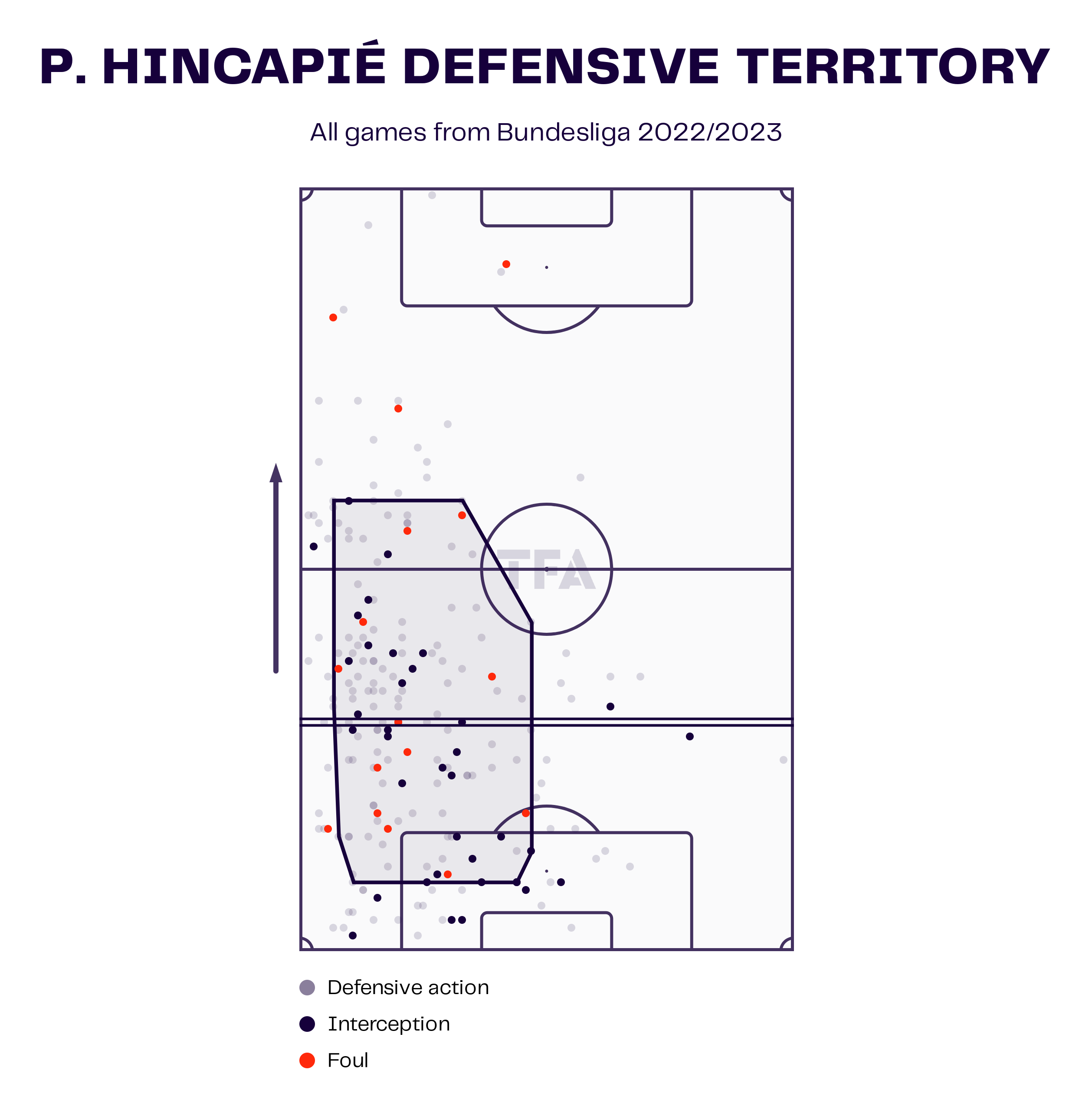 The above visual shows Piero Hincapie’s defensive territory. He has been solid at the back for Leverkusen, making an average of 5.86 interceptions per game. Moreover, he takes part in around 6.8 defensive duels per game, winning 71.3% of them. He has ranked in the top 78.5 percentile for defensive duels won, and his stats are proof of that. He also makes around 4.08 aerial duels per game with a 52.1% success rate. His presence has helped Leverkusen, as he is a fast player who can recover possession and engage in a quick transition. 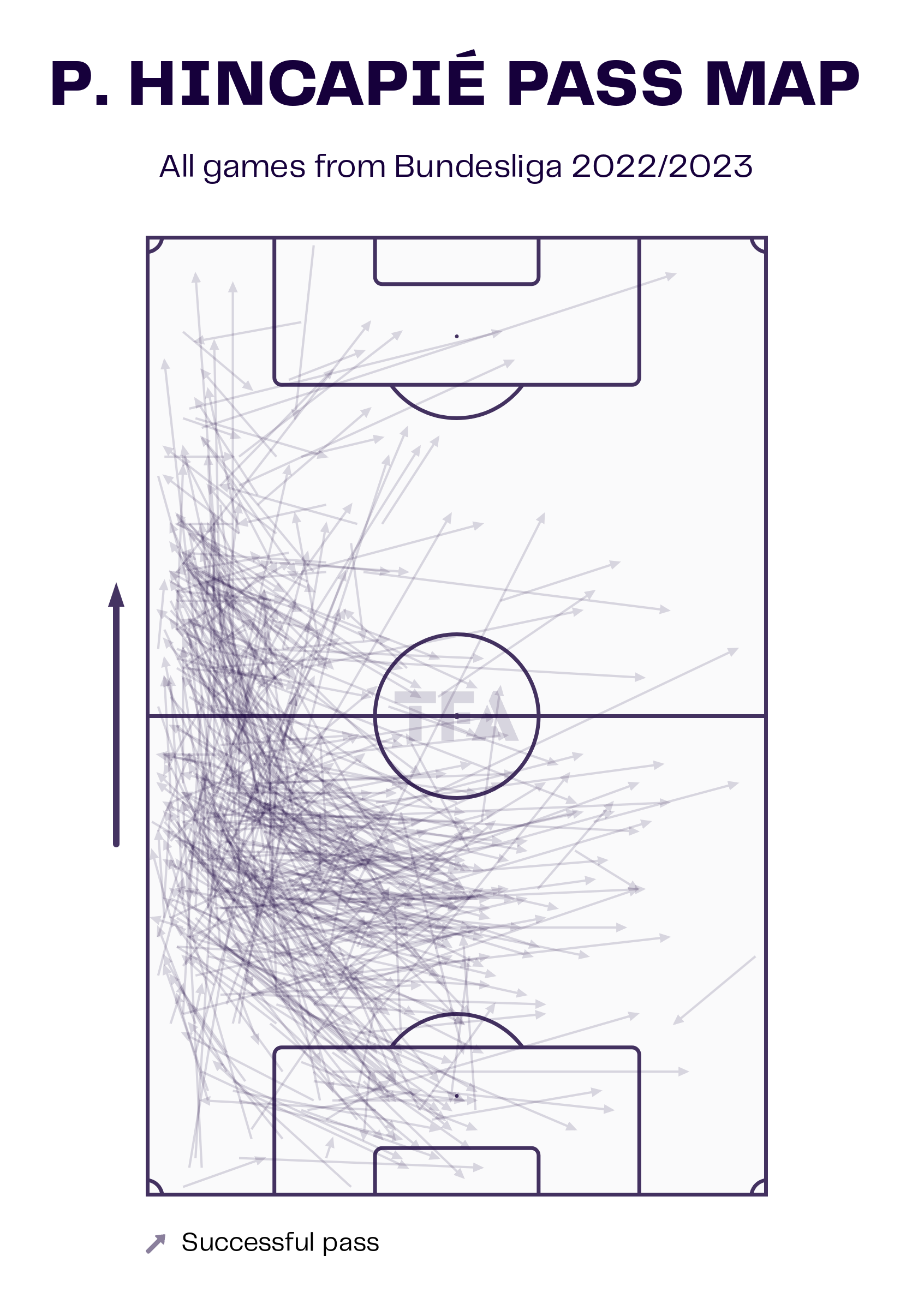 The above visual shows Hincapie’s pass map from this season. With an 85.3% passing accuracy, he makes around 54.48 passes per game. His good passing ability helps Xabi Alonso, who likes to play out from the back and build attacks. Hincapie gets involved in the attack often and plays around 4.59 passes into the final third per game with a passing accuracy of 68.5%. He also makes an average of 1.44 passes into the penalty area with an accuracy of 29.4%. The 20-year-old is also capable of switching the flanks when necessary and plays around 4.59 long passes per game with a 51.9% success rate. 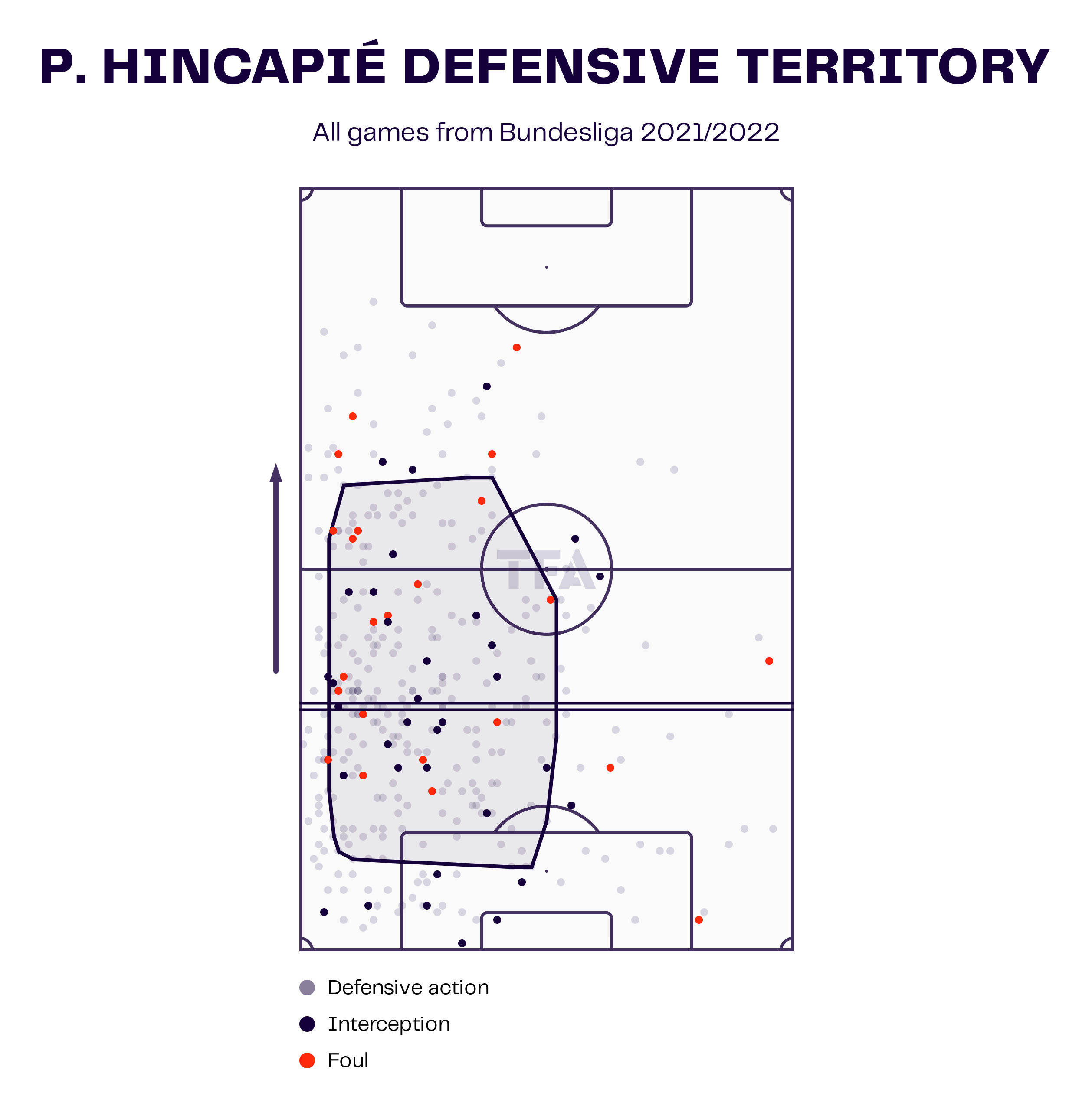 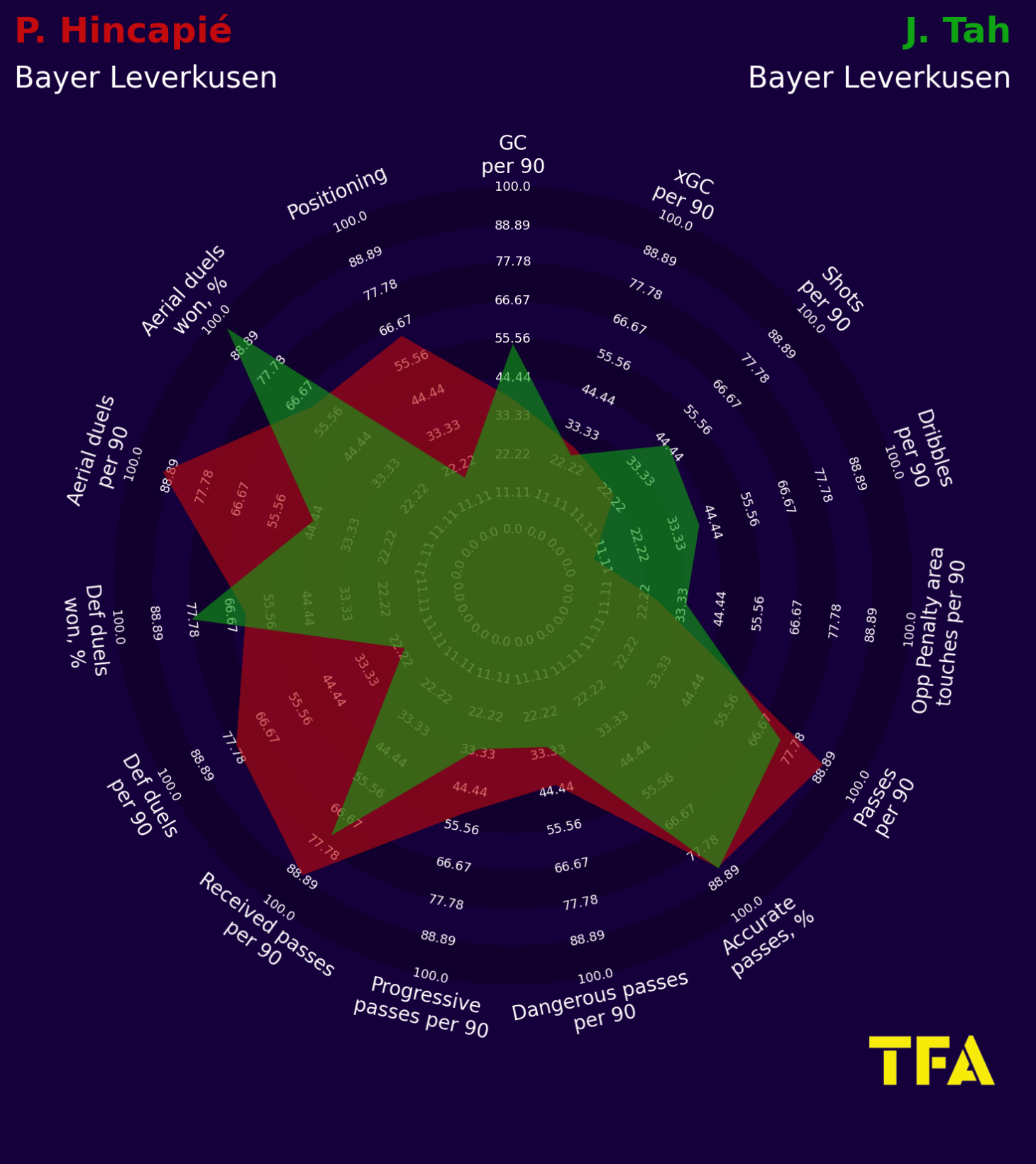 The above visual compares the radars of Piero Hincapie and his defending partner Jonathan Tah. Both are important players for Leverkusen at the back and are having good seasons. Piero Hincapie has better stats in passes per game, defensive duels, aerial duels, and positioning, while Jonathan Tah has better stats when it comes to defensive duels won, aerial duels won, goal contributions, shots, and dribbles per game. They both have been impressive for Leverkusen, and together they form a formidable backline.

Piero Hincapie has impressed everyone with his versatility, skills, and defensive output. He is fast, is a good passer, and is not easy to get past either. Therefore, as one can expect, big Premier League clubs are keeping tabs on the youngster. While whether Hincapie will leave Leverkusen for a bigger offer or not is still unclear, he will be looking to learn as much as he can under Xabi Alonso.

Under the microscope: Why European clubs are behind German sensation Youssoufa...