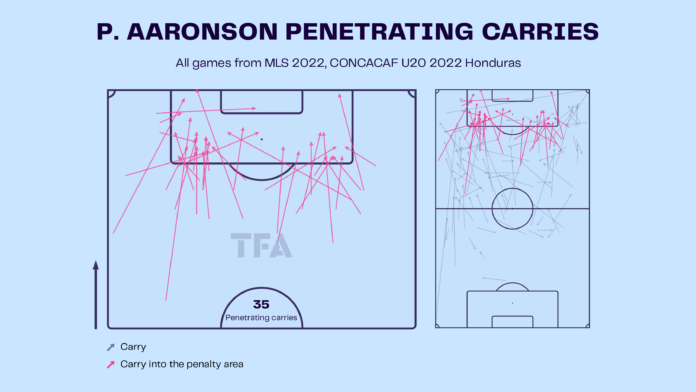 Paxten Aaronson, brother of Leeds United player Brandon Aaronson, has joined Eintracht Frankfurt for four million Euros. The 19-year-old prodigy is considered to have incredible talent and is very highly rated. He has scored only one goal in Major League Soccer this season, but his numbers don’t do justice to his talent. Aaronson was an important part of the USA under-20 side that won the CONCACAF U-20 Championship this year. He was the top scorer with seven goals and was named the best player.

We take a look at some stats to understand why he could go on to become the next big star from the United States.

Paxton Aaronson has played in 23 matches in Major League Soccer this year and has a goal to his name. He has started only two games this season for the Philadelphia Union and has come off the bench in 21 matches. But he was able to make a shift in the tempo of the match with his eager mentality and his dribbling skills. He has all the ingredients necessary to become one of the best players in the Bundesliga in the future. 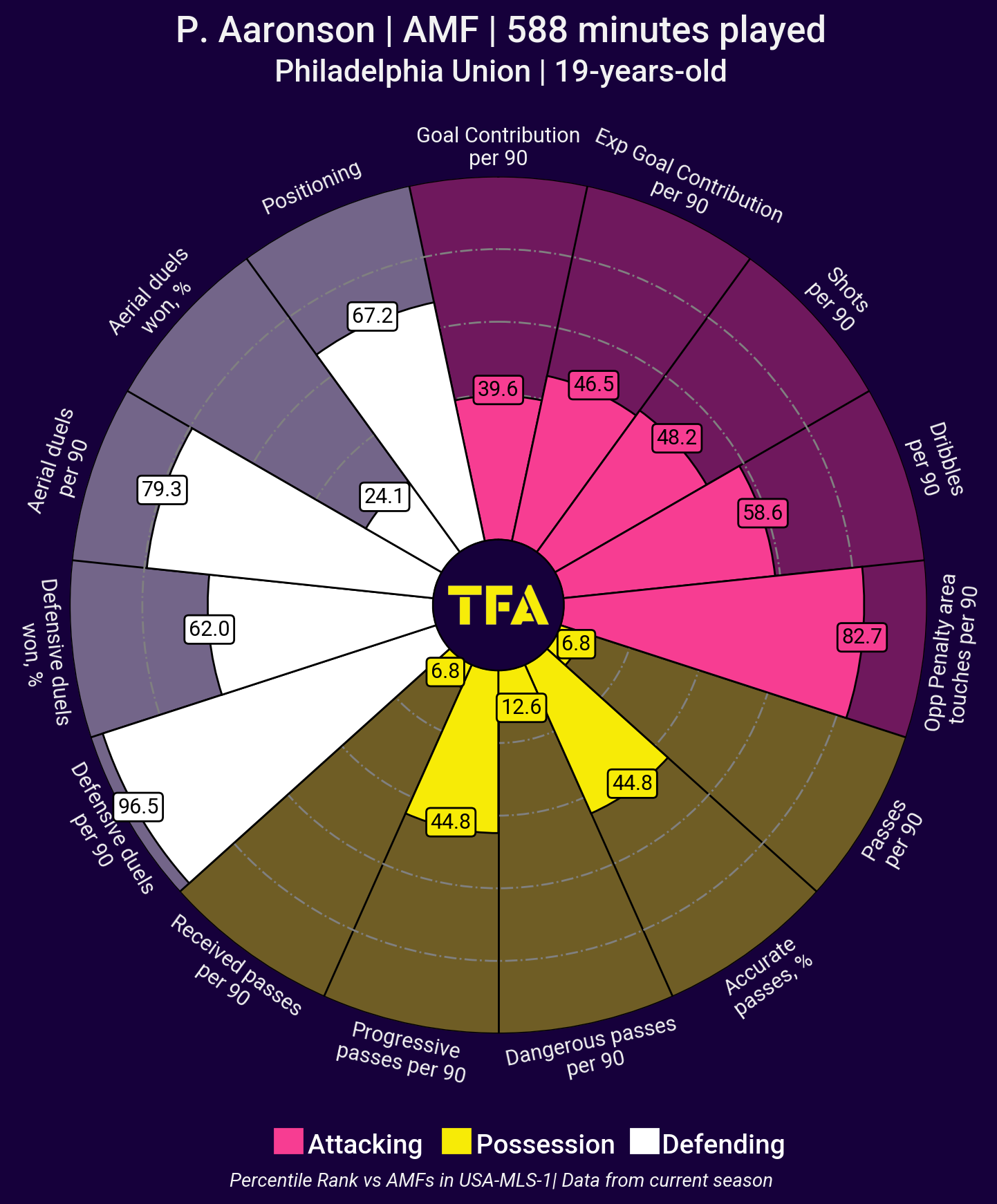 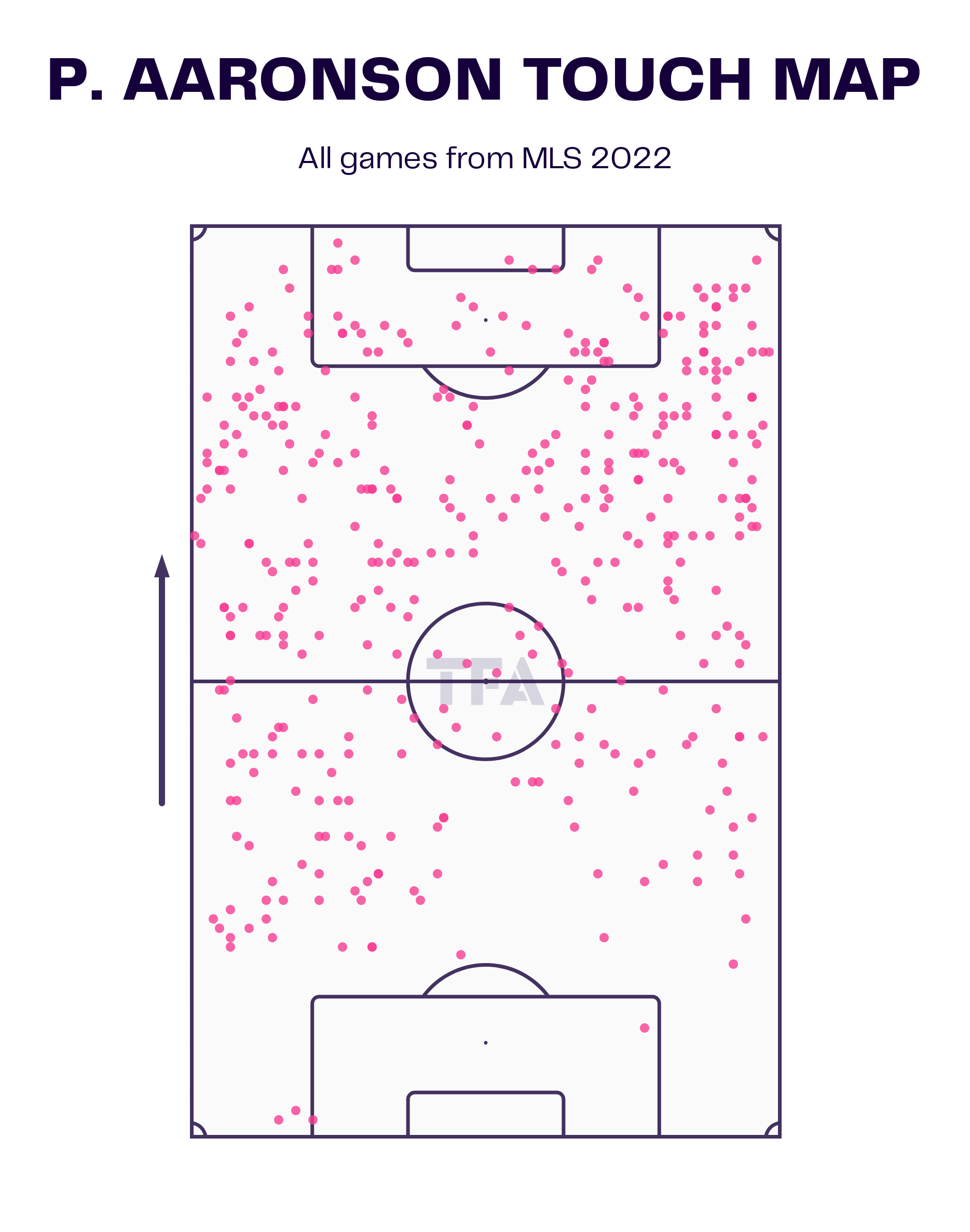 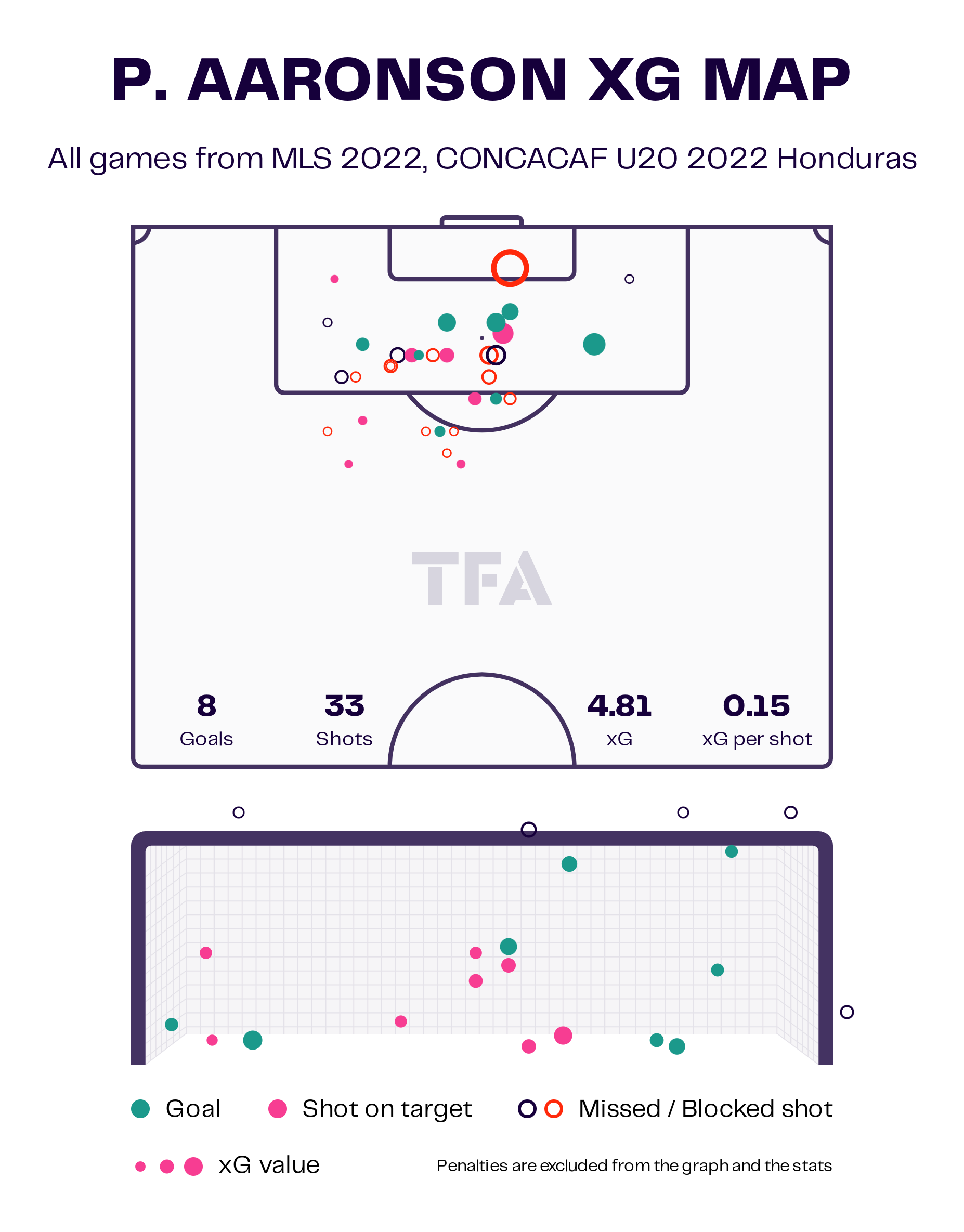 The first viz shows the touch map of Paxten Aaronson. We can observe from the touch map how he likes to stay mainly in the attacking half. He uses his dribbling skills to stretch the game and makes use of the width as well. Paxten also gets into the opposition’s penalty area and enjoys an average of 5.23 touches in the penalty area.

The second viz shows Paxten Aaronson’s xG map from Major League Soccer this season and CONCACAF U-20. He was the top scorer in the latter, with seven goals to his name, and was also named its best player. The youngster has attempted a total of 33 shots, with 22 of them coming from inside the penalty box. Of these, 16 were on target, and eight were goals. 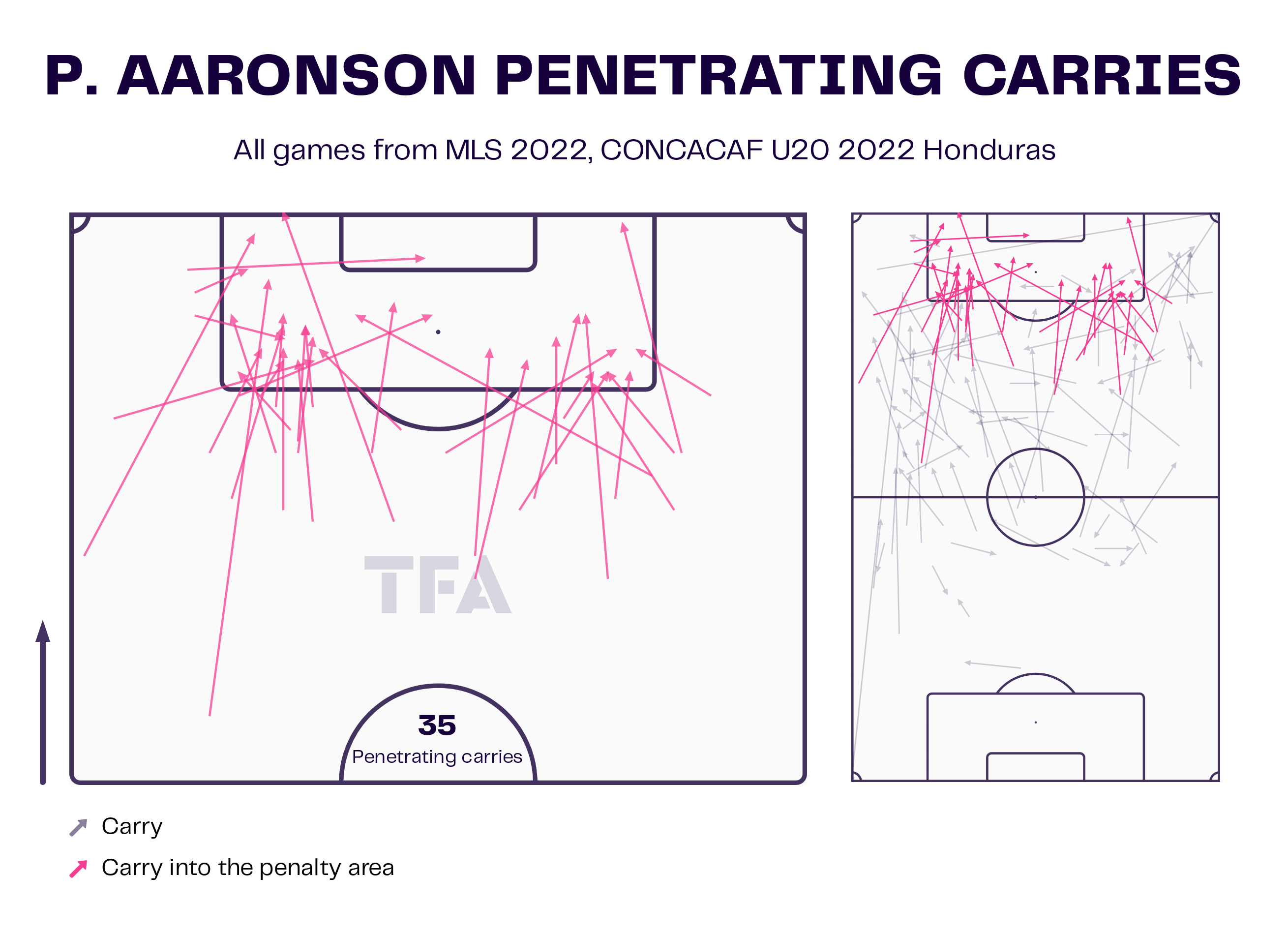 Dribbling is one of Paxten Aaronson’s major strengths. He has good ball control and runs with the ball glued to his feet. On average, he makes around 4.18 dribbles per game with a 63% success rate. He is quick, wiggles past challenges, and brings the ball forward. The US International has made 35 penetrating carries this season and has made 2.5 progressive runs per game as well. The 19-year-old typically collects the ball from wide areas or half-spaces and brings it inside to create goal threats. 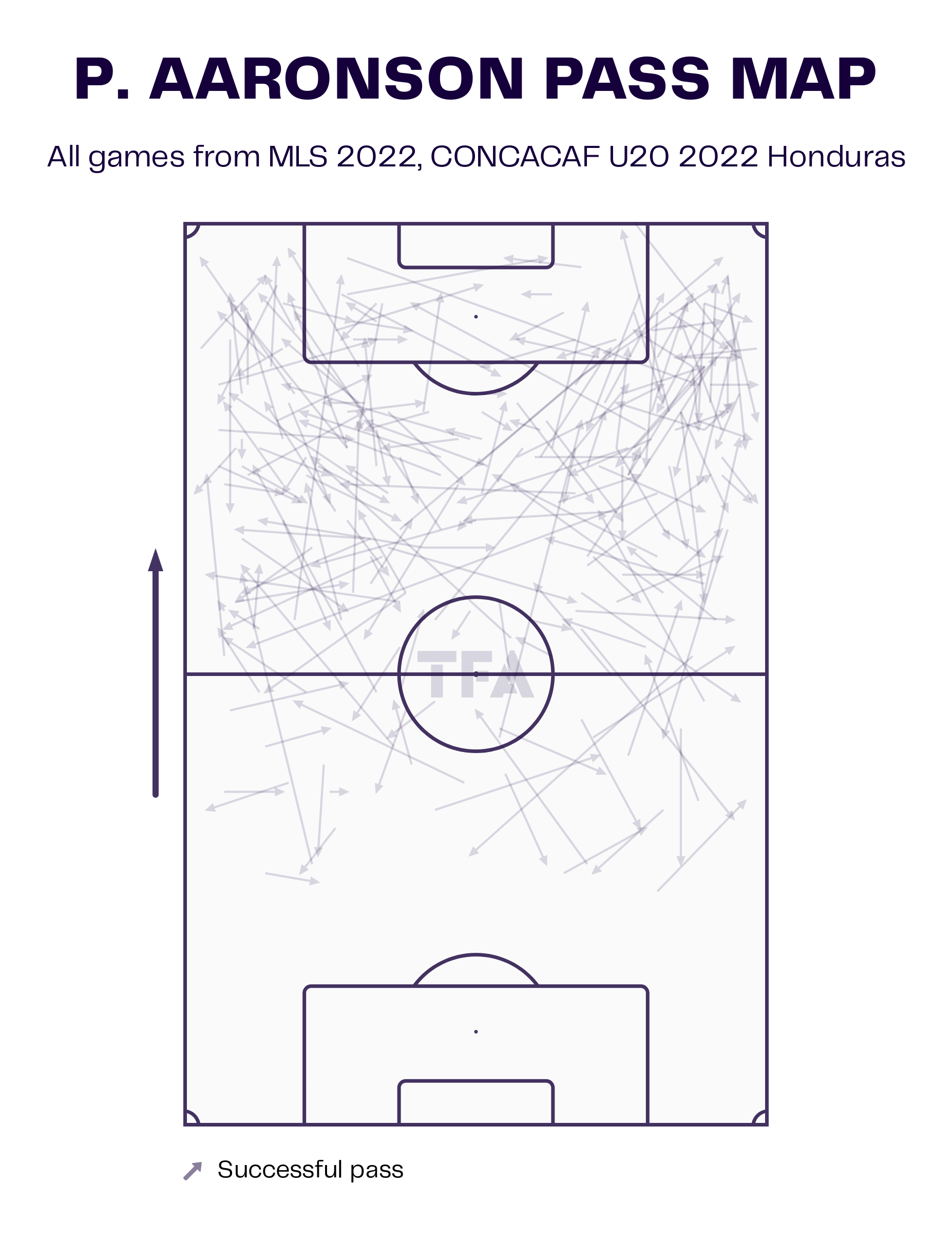 The above viz shows the pass map of Aaronson. He is an attacking midfielder and therefore plays a lot of passes in the attacking half. He has a passing accuracy of 81.6% and makes around 25 passes per game. Aaronson contributes to the attack by playing an average of 2.77 passes into the final third per game. He completes 75.4% of those passes and combines well with other players. Paxten also plays around 2.25 passes into the penalty box per game. His involvement in the attack was crucial for his team’s success at CONCACAF U-20 this year.

Paxten Aaronson is a young talent and has a lot of potential as well. The move to the Bundesliga is a step up from the MLS, and he would be trying to make the most of this opportunity. The chance to play with some fine players will improve him in all aspects. Even if the player does not produce the same numbers right away, there is no doubt that Eintracht Frankfurt have a gem in their hands for the future.