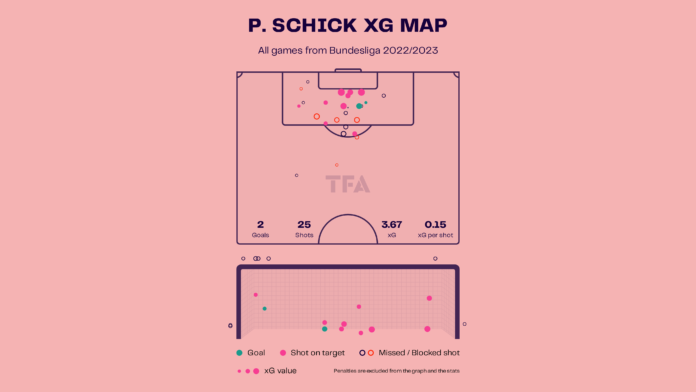 Bayer Leverkusen is slowly recovering after the appointment of Xabi Alonso as their head coach. After a horrid start to the season, the arrival of the Spanish coach has seen an improvement in not only the team’s performance but also in some players. One player that has to step up is their top scorer from last season, Patrik Schick. The 26-year-old ended the last season with 24 goals and only behind Robert Lewandowski in the goals list of the Bundesliga. But Schick has gotten off to a poor start this season with just two goals from 11 matches. His team has recovered from a poor run of form and is enjoying a three-match winning streak. Therefore, we look at his stats to understand how Schick’s poor form has affected Leverkusen’s season.

Patrik Schick has made 11 appearances this season, starting ten. He has scored two goals in the Bundesliga and one in the Champions League as well. His dip in form did not help an already struggling Leverkusen side. 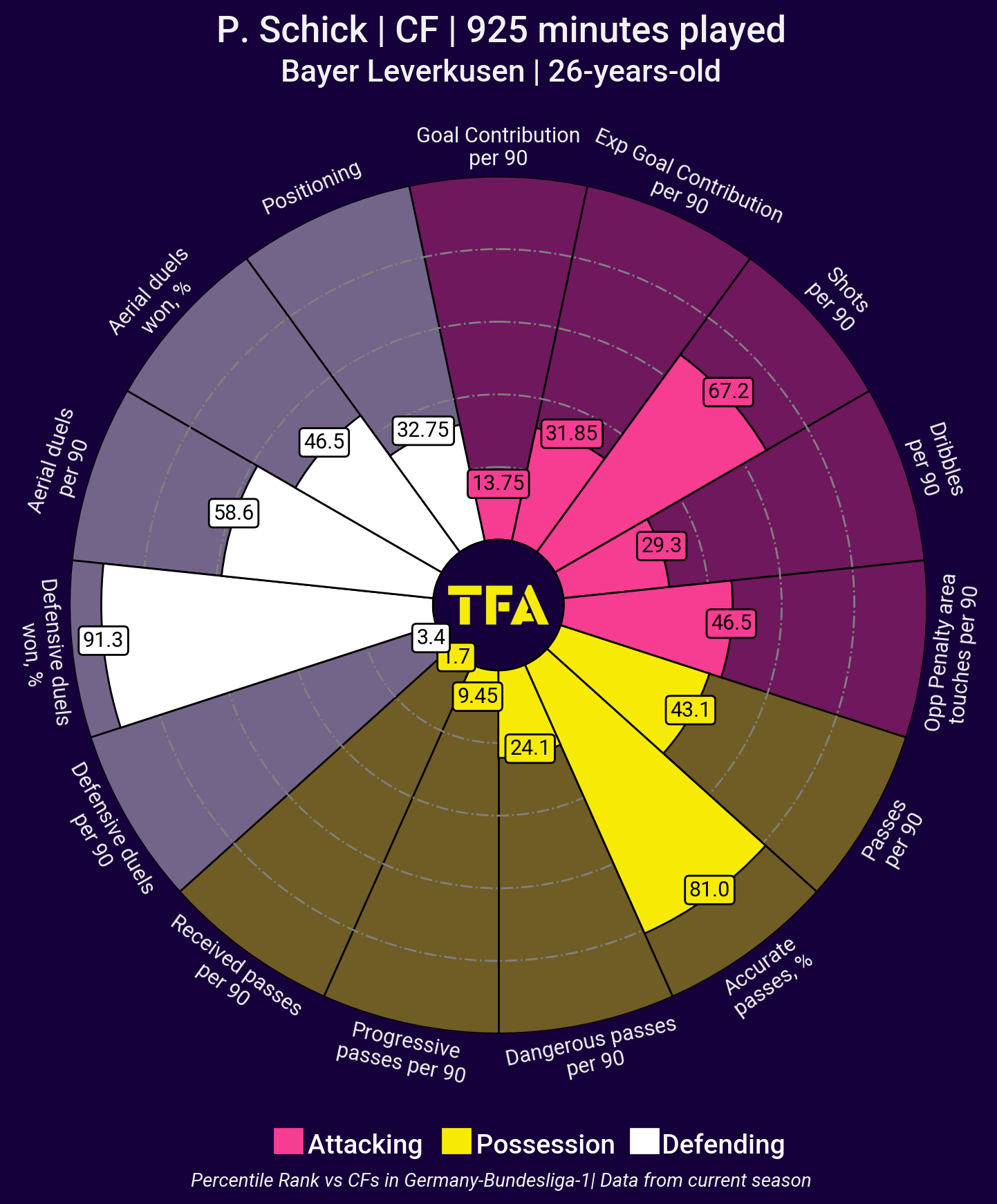 The above visual shows Patrik Schick’s percentile rank compared to other centre-forwards in the Bundesliga. This season has not gone according to plan for him, with him having average stats for almost all metrics. However, he is ranked in the top 81 percentile for accurate passes per game and the top 91.3 percentile for defensive duels won. Schick is also ranked in the top 67.2 percentile for shots per game, which is above average. But in dribbles, goal contribution, and entry into the opposition penalty area, he is ranked below average, which shows how his season has gone so far. 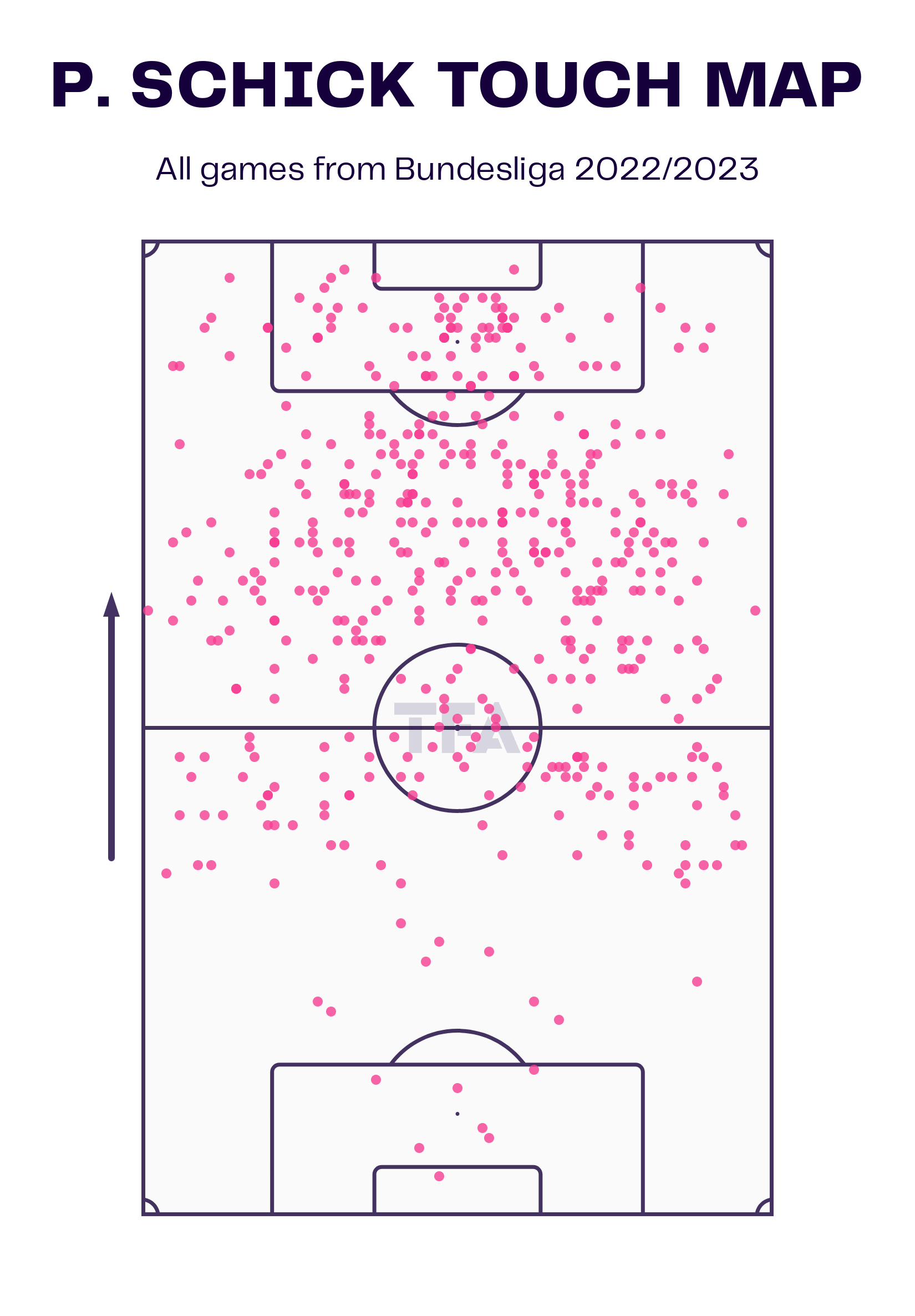 The above visual shows Patrik Schick’s touch map from the current Bundesliga season. Playing as a centre-forward, he usually takes most of his touches in the attacking half. As we can observe from the visual, he positions himself more centrally but is not hesitant to get into the vacant spaces if need be. This season, he is ranked below average for entry into the opposition penalty area and averages 3.6 touches in the penalty box. This figure has come down from an average of 4.81 last season. 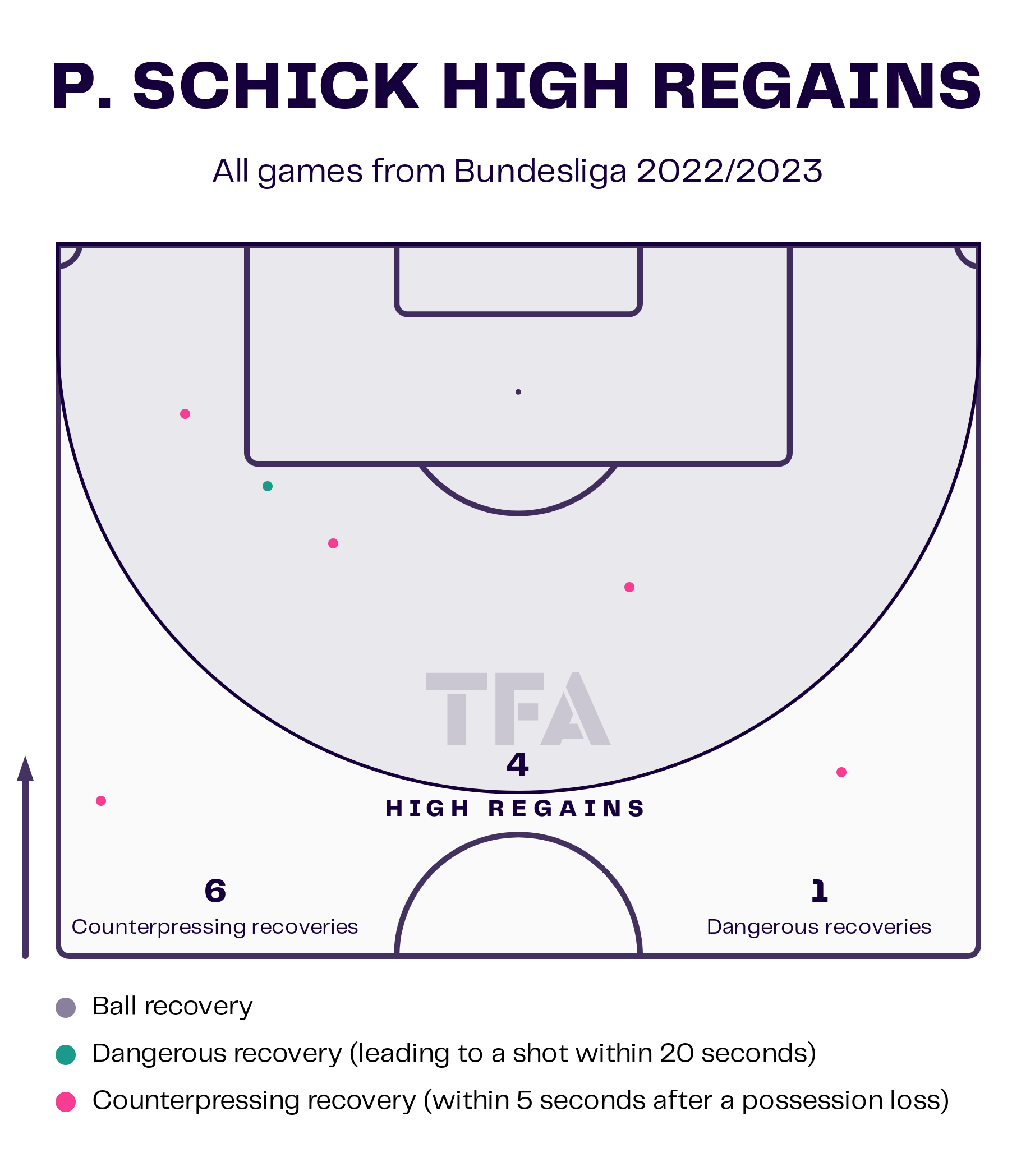 Xabi Alonso’s football is based on high pressing and recovering the ball in attacking positions. However, Schick has not been able to do that this season, as he has only made six counter-pressing recoveries and one dangerous recovery. His average recovery per game has had a slight dip from 1.62 recoveries per game with 41% of them in the attacking half to 1.07 per game with 63% in the attacking half. Although he’s not the best at pressing, Schick will have to add this feature to his game as the team looks to press the opposition hard. 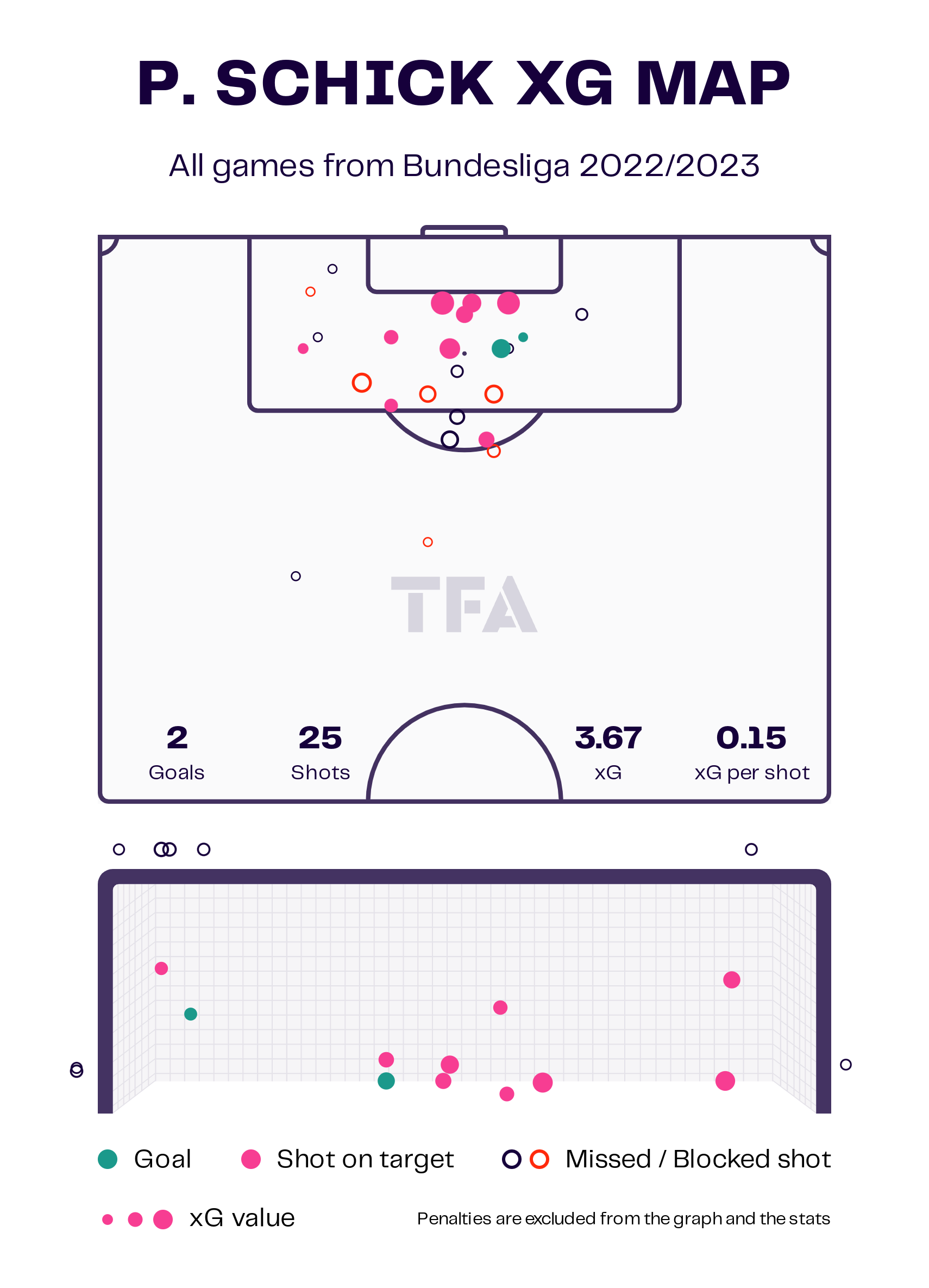 Patrik Schick has only scored two goals this season. Schick, who was Leverkusen’s top scorer last season with 24 goals to his name, has failed to replicate his brilliant form this season. From a total of 25 shots, 11 were on target; Schick’s lack of efficiency in front of the goal has hurt the team. He has averaged 2.43 shots per game, with 44% of them on target, for 0.19 goals per game. 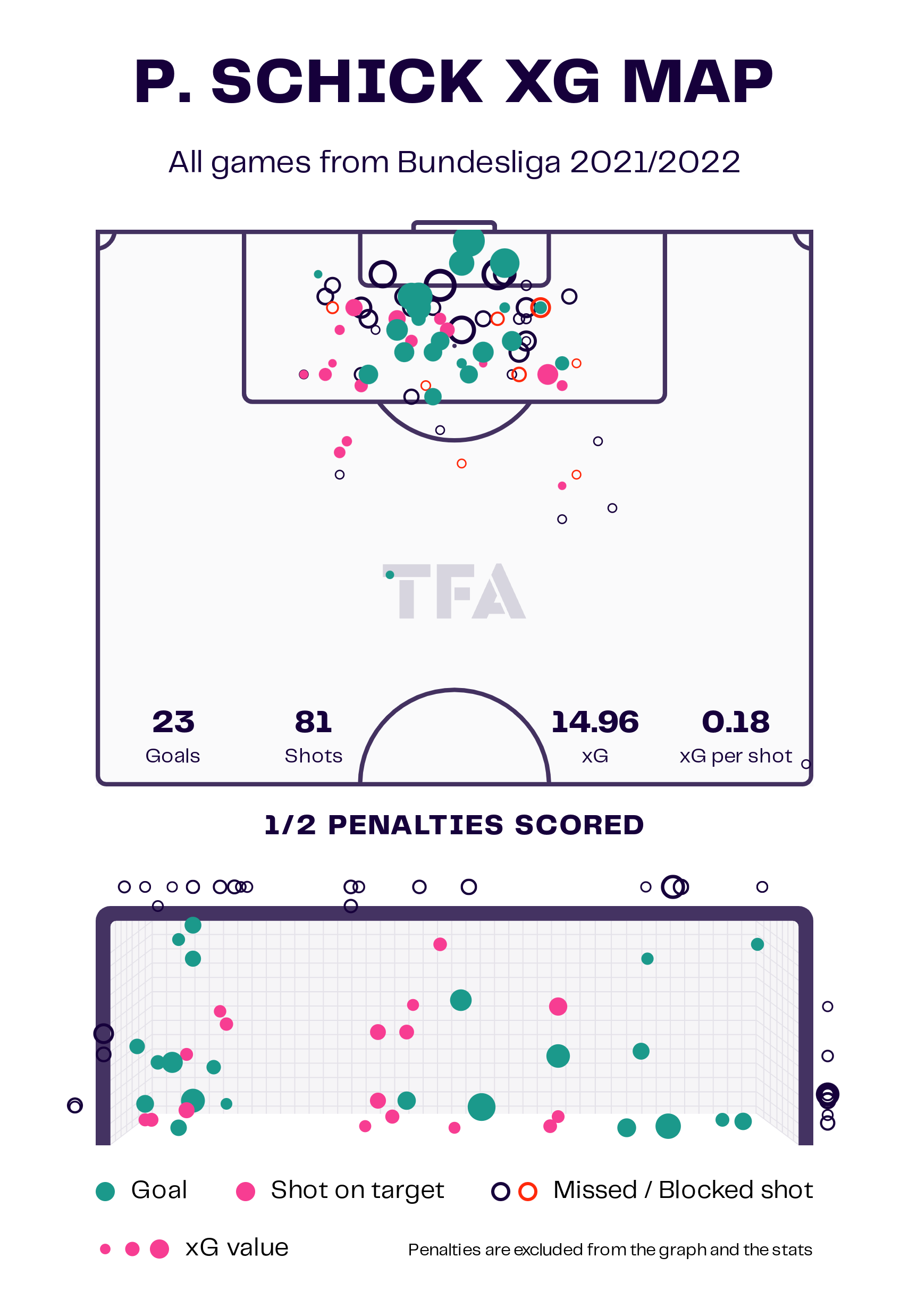 Schick’s current season is a complete contrast to his previous season. With 24 goals, he ended the season as their top scorer and second on the list of goal scorers in the league. He attempted 81 shots last season with 39 on target for an average of 3.44 shots per game with 50.6% accuracy. He had an xG of 14.96, which he exceeded comfortably, and scored an average of 0.99 goals per game. 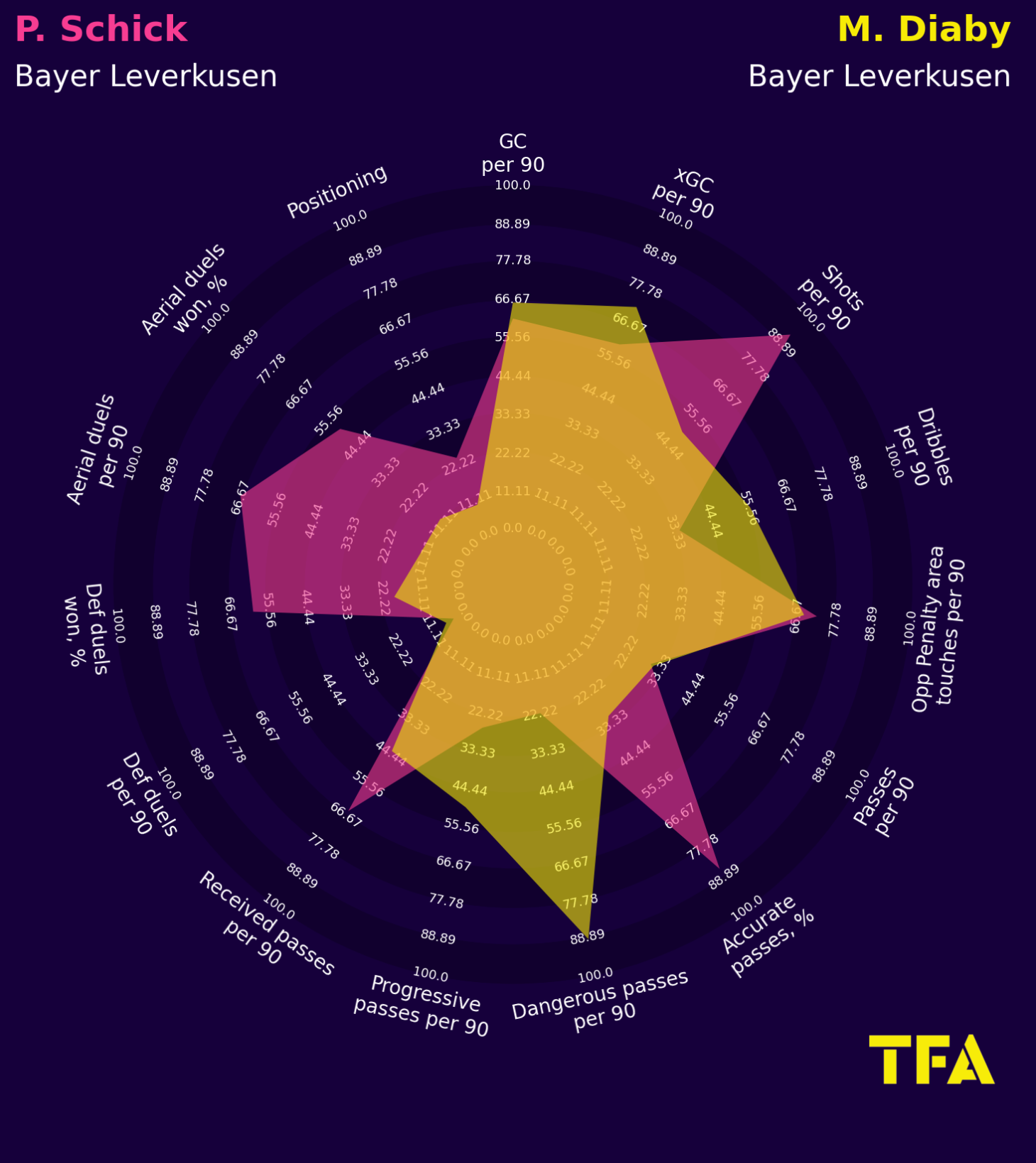 The above visual compares the radars of Patrick Schick and his teammate Moussa Diaby. With Schick out of form, Diaby has been the main goal scorer for Leverkusen. He has scored seven goals this season and is leading their goal chart. Patrik Schick has better stats in defensive duels, aerial duels, accurate passes, and shots per game, while Diaby has better stats in dangerous passes, goal contributions, and dribbles per game.

Patrik Schick’s poor form is likely to affect the betting markets, and most likely, the 1×2 odds are expected to go up for Bayer Leverkusen. As for the over/under lines, underlines are expected to flourish more.

Patrik Schick’s lack of form has been a worry for Bayer Leverkusen this season. With the international break, both the player and the manager will be hoping that he can revive his form from last season and start scoring goals again.