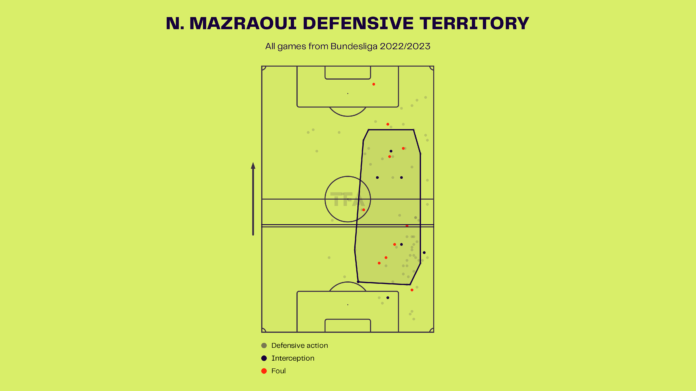 Bayern Munich signed Noussair Mazraoui from Ajax for free in the summer transfer window, and the Moroccan is turning out to be one of the best deals they made this season. The former Ajax player has adjusted well to the Bundesliga and has now become an important piece of the puzzle for Bayern Munich. As the 24-year-old is good at overlapping, providing those good passes, and tracking back as well, he is the perfect foil for Bayern Munich on the right side of the defence.

We take a look at some of his stats to understand how impressive he has been this season for the Bavarians.

Noussair Mazraoui has played 11 matches this season with Bayern Munich and has three assists to his name as well. He started six matches while being brought on in the other five. He overlaps well and gives Bayern another attacking option as well. 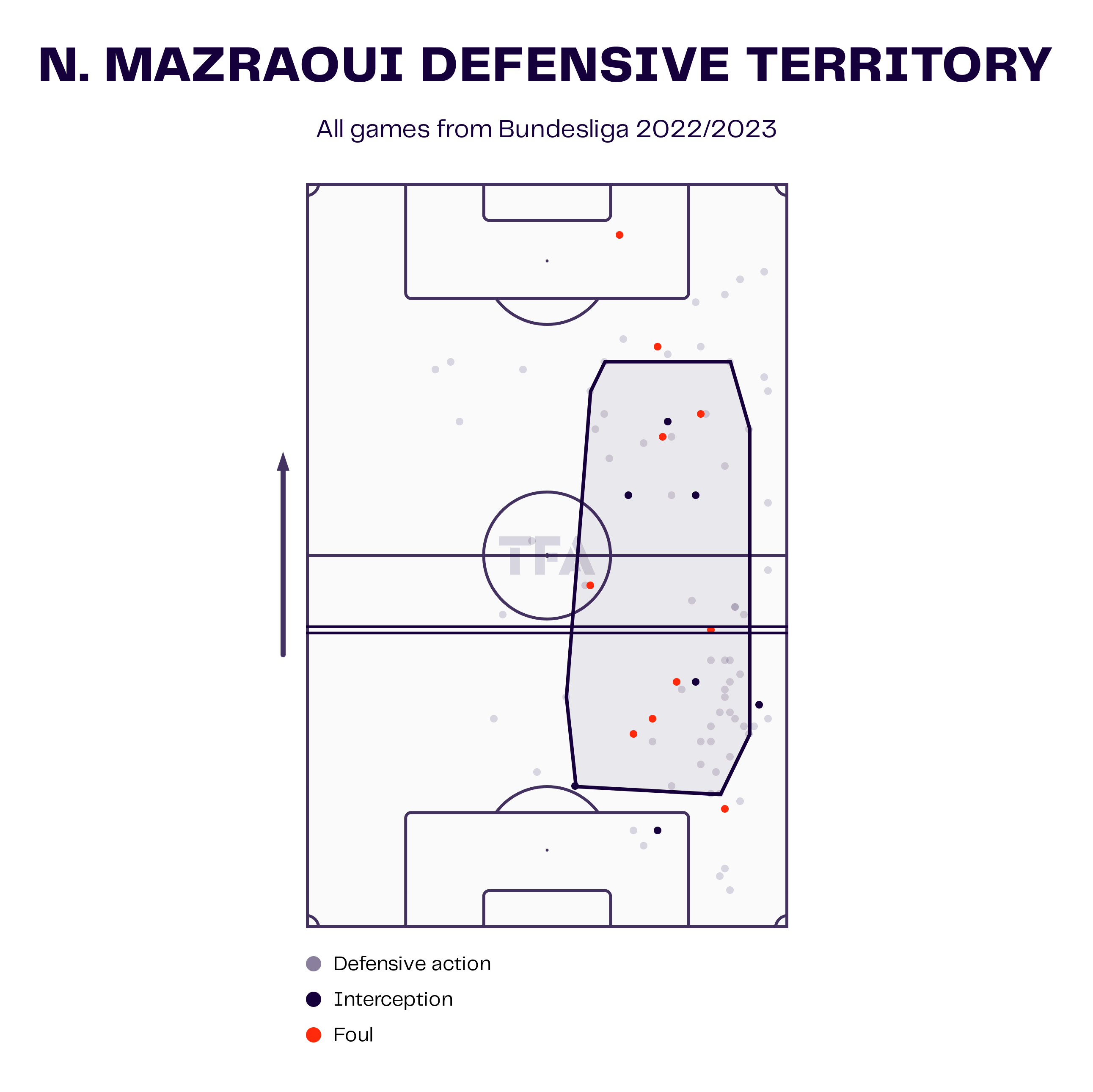 Noussair Mazraoui plays as a right back and goes forward in attack as well. He was involved in the attack a lot when he was at Ajax, and it is one of the things that attracted Bayern. The addition of Mazraoui has given Julian Nagelsmann the option of playing Benjamin Pavard at centre-back. He is good defensively as well, making around 2.93 interceptions per game and around seven recoveries as well. 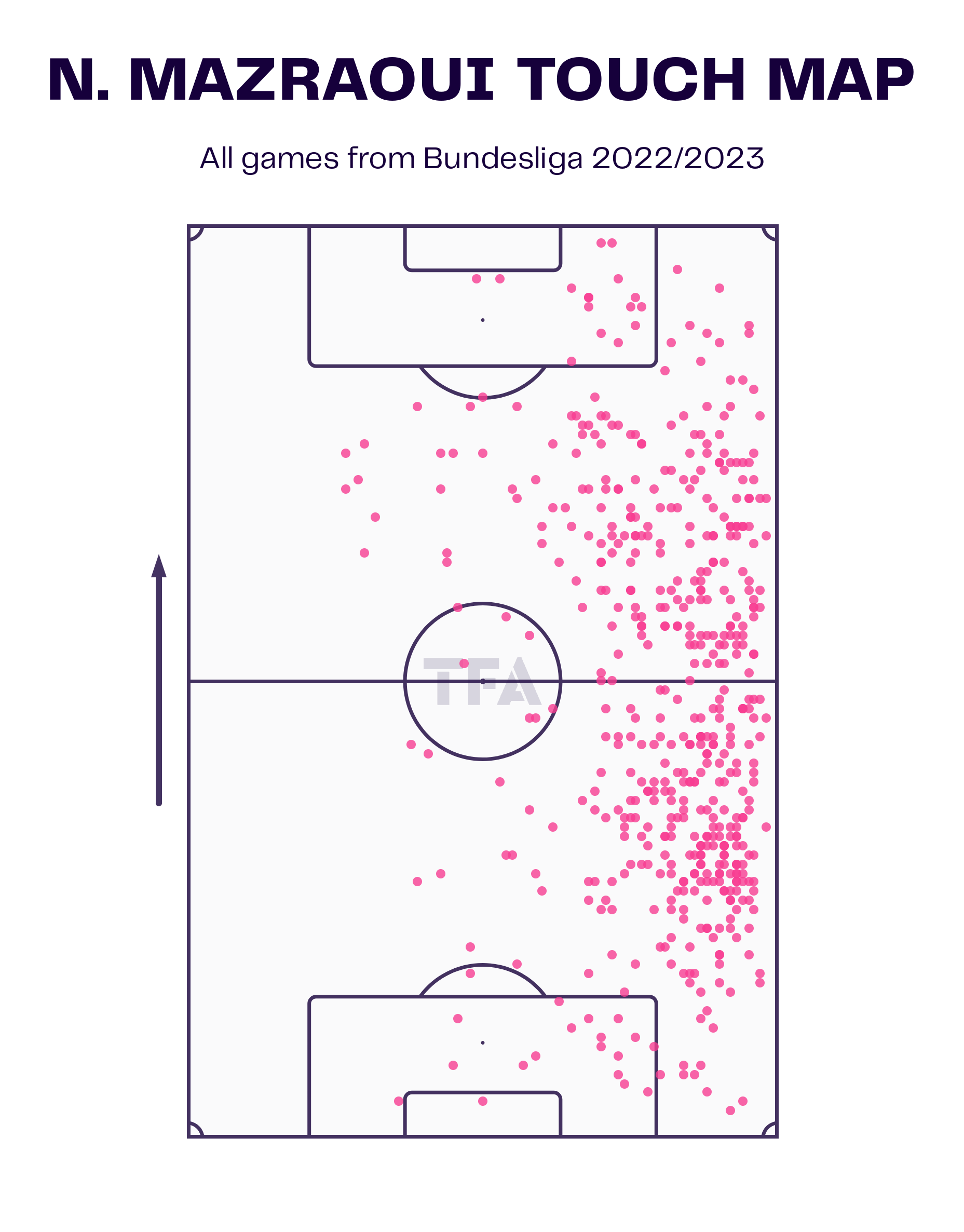 Noussair Mazraoui plays as a right-back and provides width on the right side. He also overlaps very often and provides support for the wingers while attacking as well. The above viz shows the touch map of Mazraoui. We can observe how he likes to get forward and operate on the wing. He showed that he can make a difference when he came on for an injured Benjamin Pavard in the Champions League and produced a stellar display. He makes around 6.16 defensive duels per game with 62.5% accuracy and around 2.77 aerial duels with 38.9% accuracy as well. 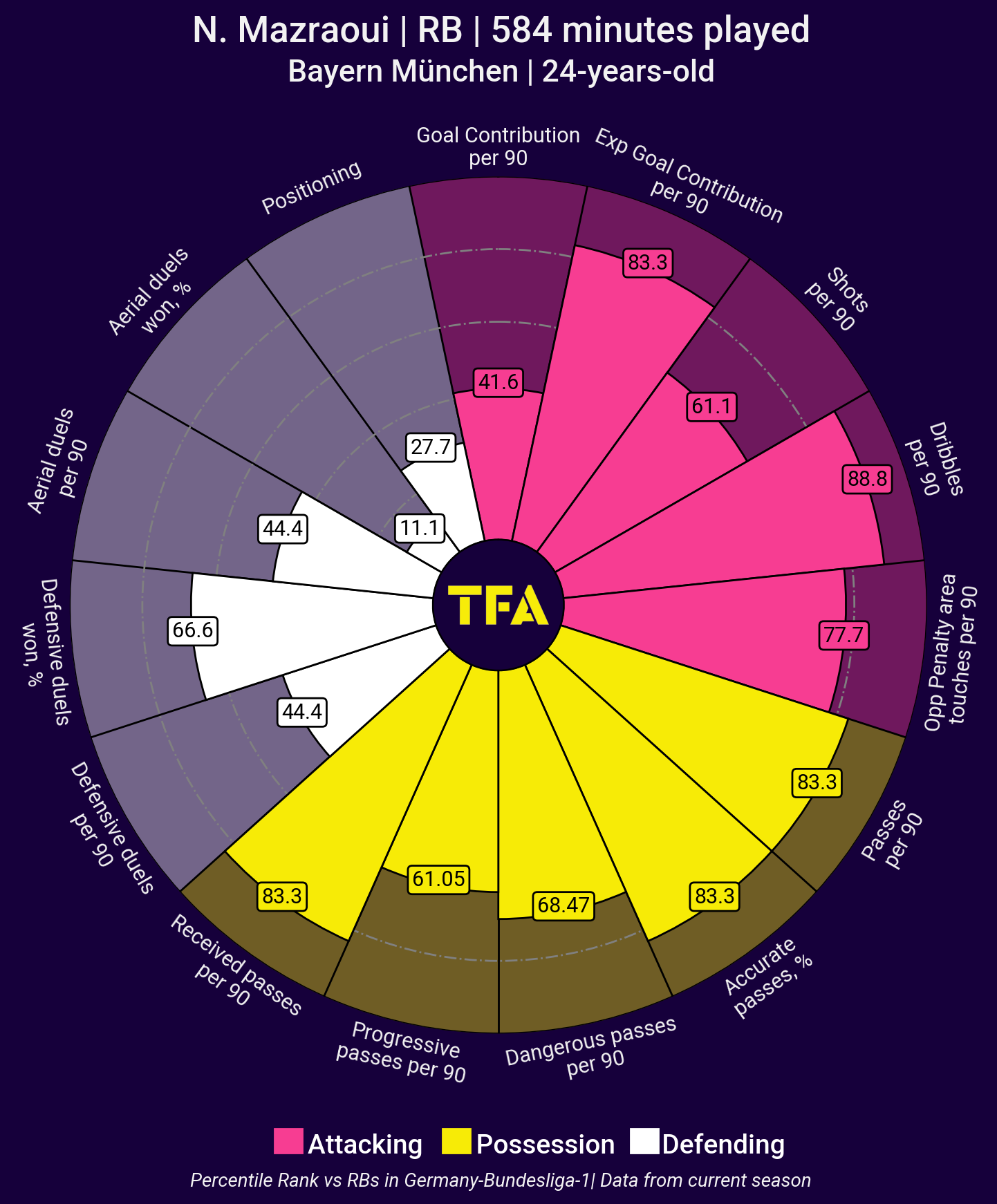 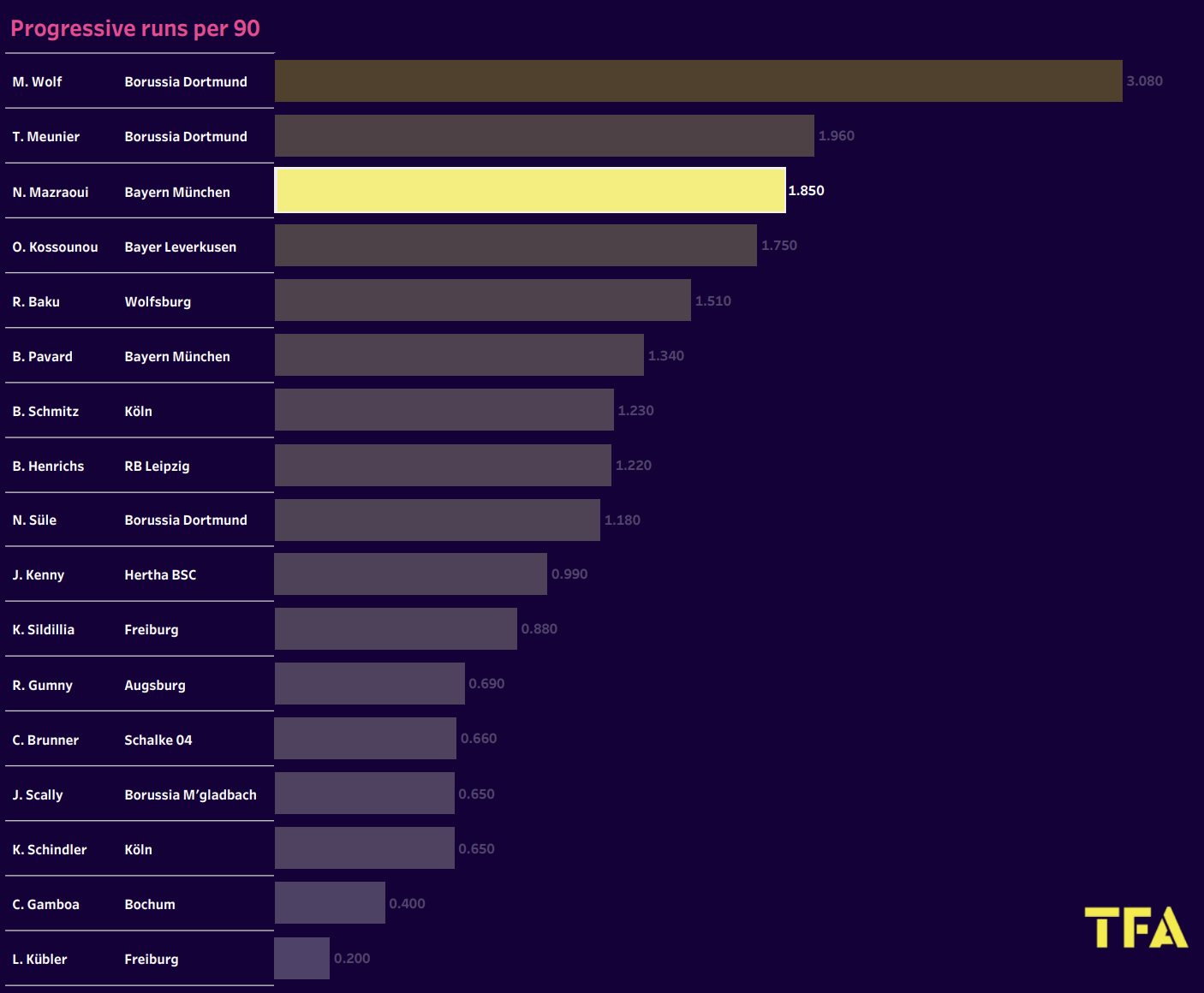 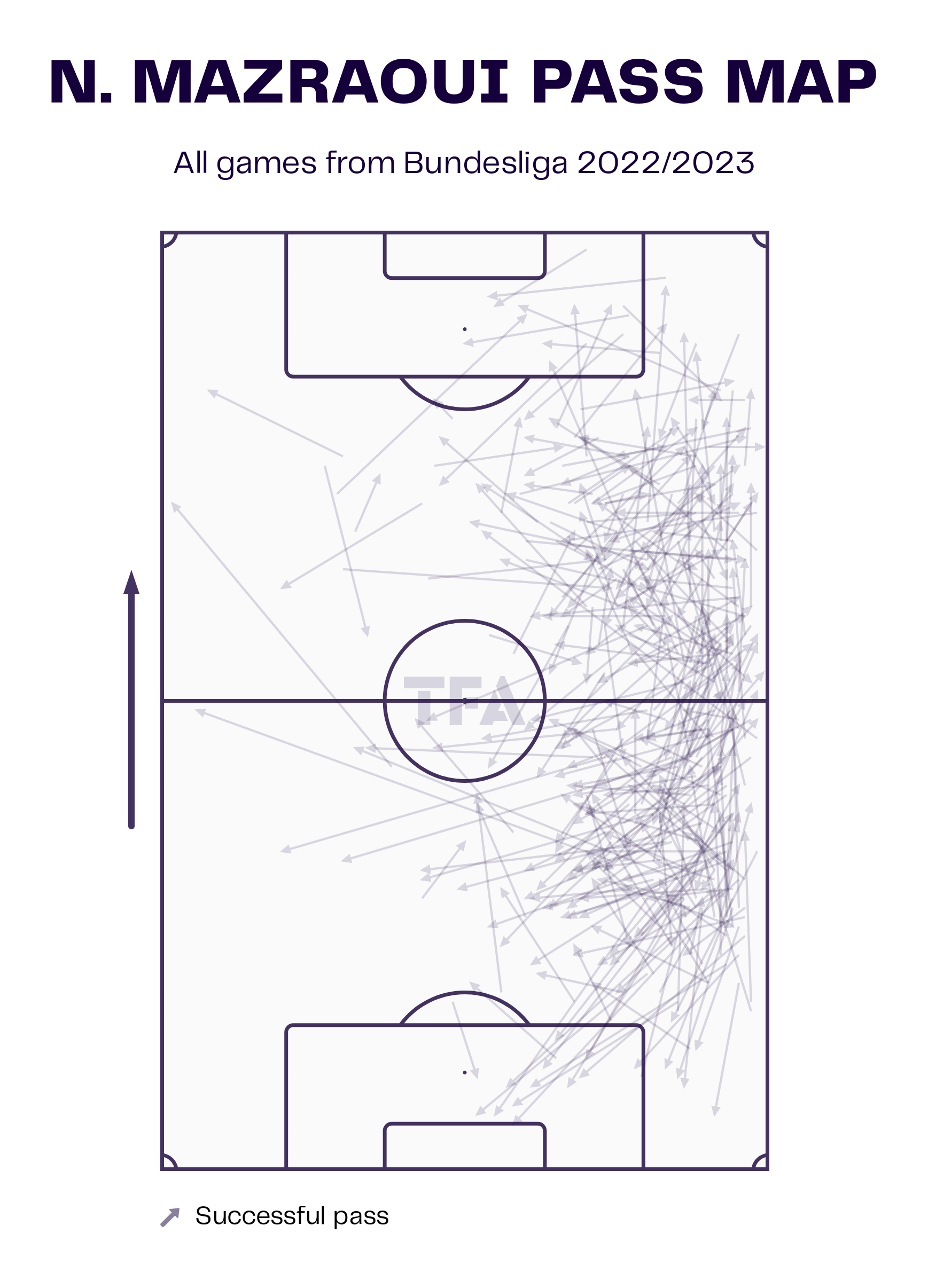 The 24-year-old has a good record of passing and is ranked in the top 83.3 percentile for accurate passes. He has a passing accuracy of 87.5% and links up well with the wingers as well. We can observe from the pass map how he stays wide on the field and provides the ball inside. He provides around 5.7 passes into the final third per game and plays around two passes into the penalty boxes as well.
Noussair Mazraoui has been a revelation for Bayern Munich. Even though it took him some time to adjust to Julian Nagelsmann’s system, he looks at home now. The Moroccan International has managed to impress his coach and the fans as well, and he will be looking to give his best shot in the World Cup as well.
Visuals via TFA data viz engine