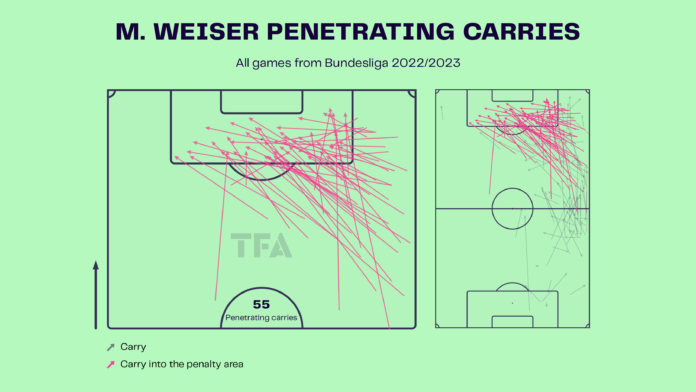 After playing for different clubs in the Bundesliga for years, Mitchell Weiser seems to have finally found his feet playing for Werder Bremen. He has the best stats of his career so far, with one goal and six assists. After having played for Bayern Munich, Hertha, and Bayer Leverkusen, Werder Bremen is looking like the place where he will finally realise his potential. This season, he has six assists and is having a good season. We take a look at some stats to understand how he is booming at Werder Bremen.

Mitchell Weiser has made 15 appearances this season, starting all of them. Weiser has seven assists and a goal in the Bundesliga and two goals and one assist in the DFB Pokal. 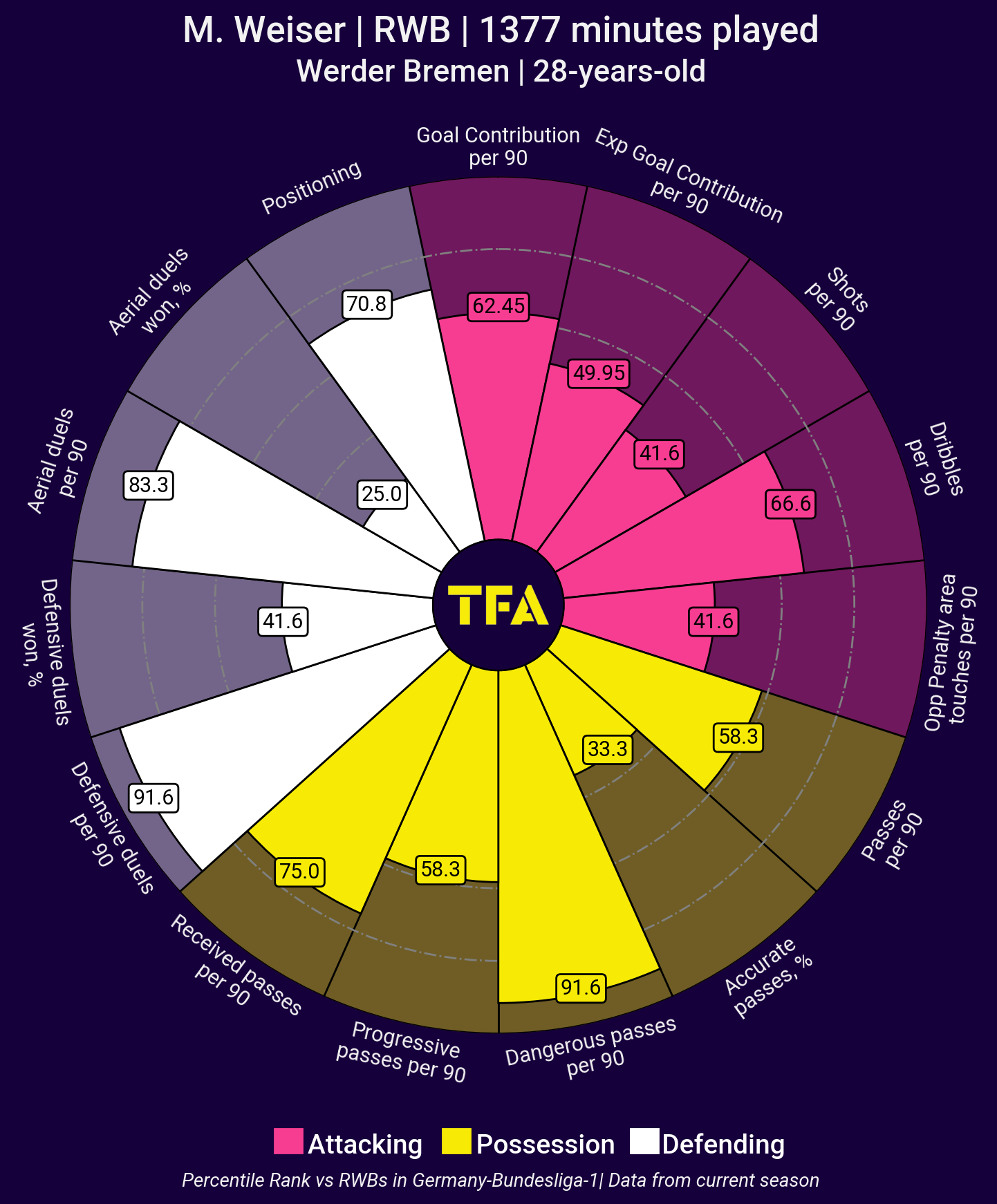 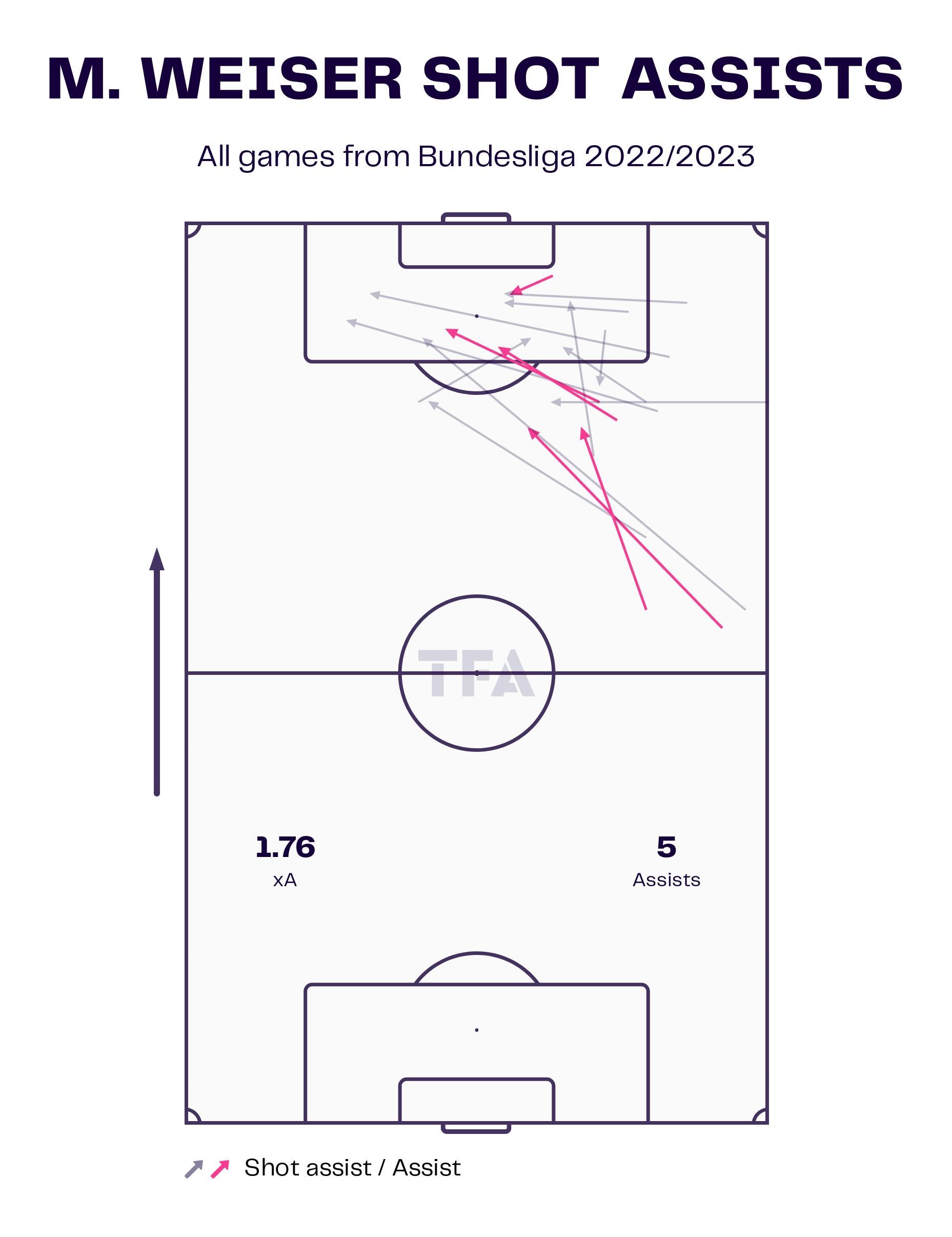 Mitchell Weiser has six assists this season. The above visual shows the shot assists of Mitchell Weiser in the Bundesliga. He has an expected assist value of 1.76, which he has easily exceeded. Weiser attempts an average of 0.92 shot assists per game and has been impressive. He also attempts 0.85 shots per game. Playing as a right-winger or wing-back, his contribution from the right has helped Werder Bremen a lot. 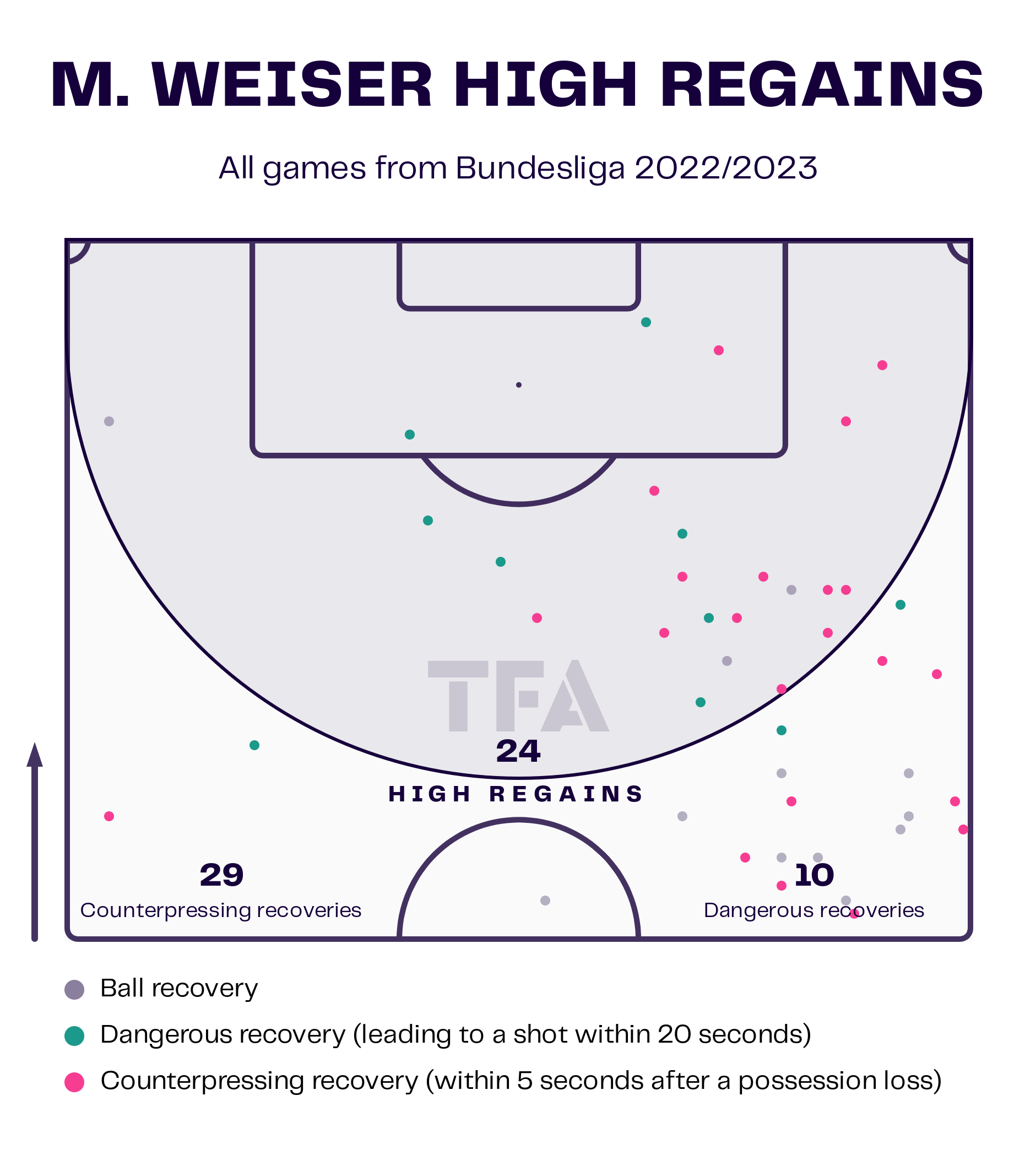 Mitchell Weiser positions himself high up the pitch and recovers possession in dangerous areas. The above visual shows the high regains made by Weiser this season. He has made 29 counterpressing recoveries and 10 dangerous recoveries. Making an average of 7.52 recoveries per game, with 47% of them in the other half, Weiser helps Bremen win the ball back and restart the attack. 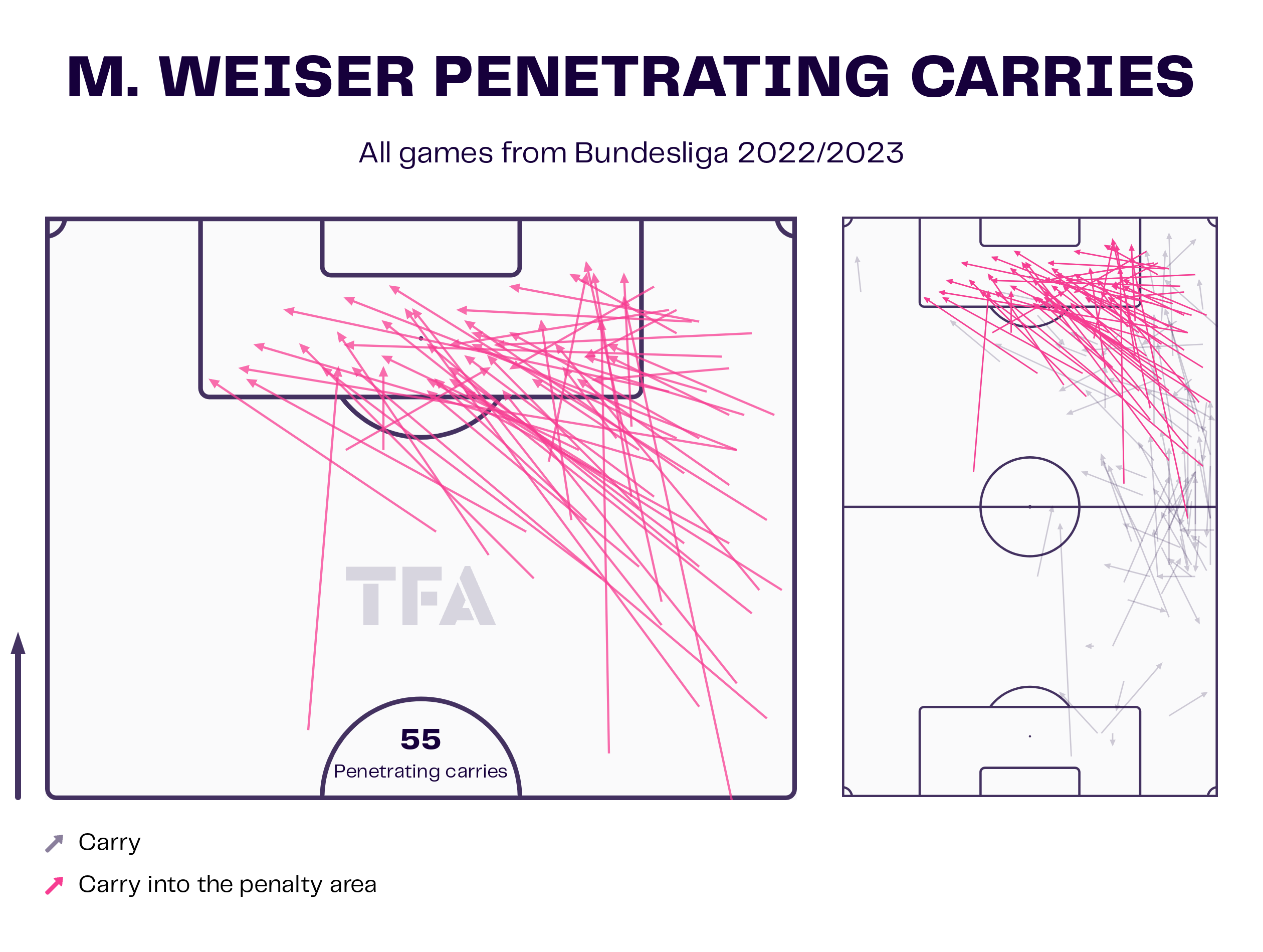 The above visual shows the penetrating carries made by Weiser in the current season. He has made 55 carries penetrating defensive lines from the right flank, with an average of 4.58 dribbles per game and 48.6% success. We can observe from the map that he dribbles the ball from left to right, bringing it closer to the goal and therefore making a greater threat than from wide. In addition, he makes around 1.57 progressive runs per game as well. 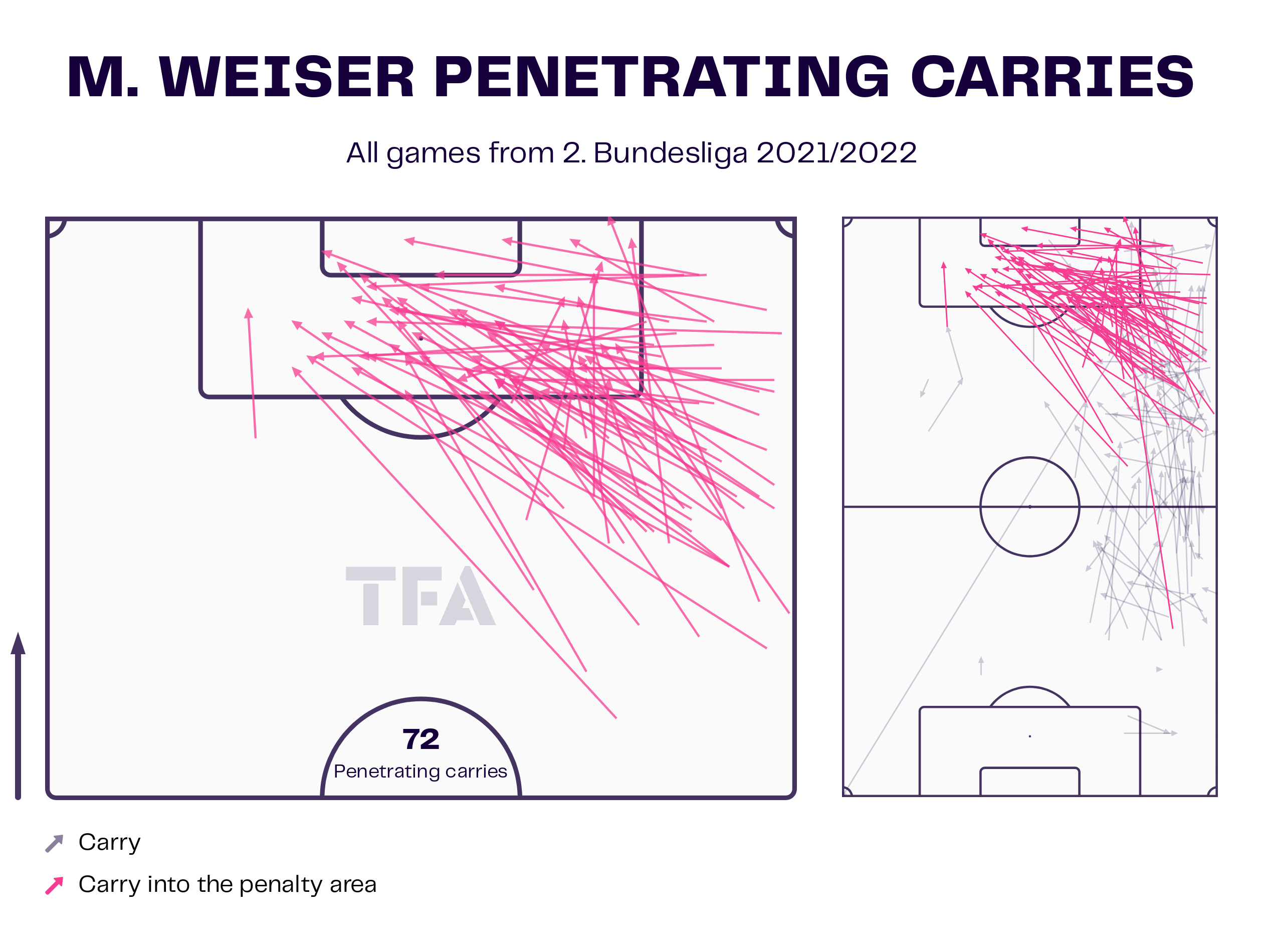 Last season, Werder Bremen played in the Bundesliga’s second division, and Weiser made 72 penetrating carries. He made an average of 4.95 dribbles per game with 51.2% success. Even though this figure has come down a bit, the difference between the second-division and the top-tier league makes it negligible. 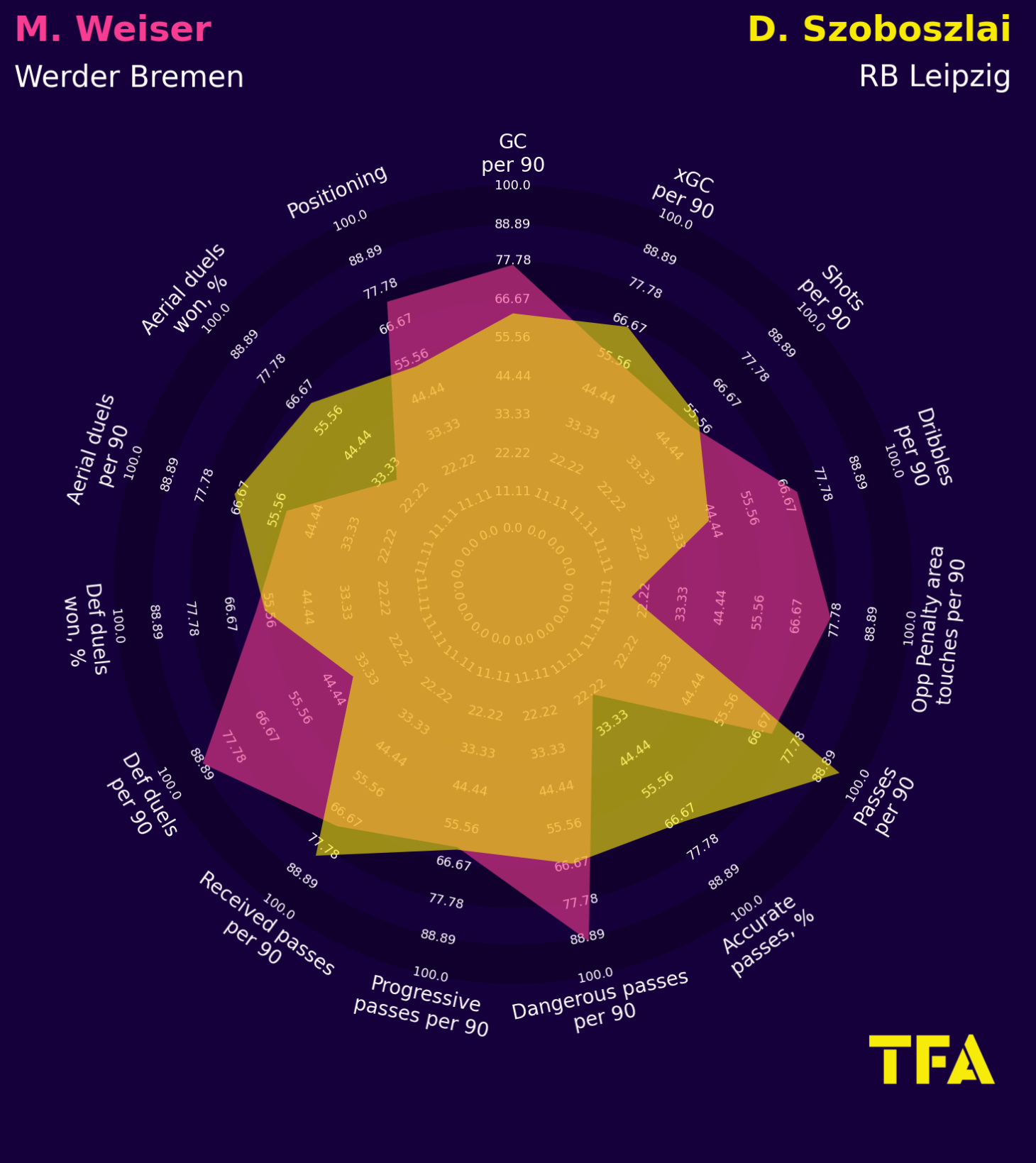 The above radar compares the radars of Mitchell Weiser and Leipzig player Dominik Szoboszlai. Both of them are on the list of the top-five assists in the league and are having a great season individually. We can observe from the visual that Weiser does better in defensive duels, dangerous passes, dribbling, and goal contributions while Szoboszlai does better in passing the ball accurately, aerial duels, and shots per game. They both play important roles in their respective clubs and are doing well.

Mitchell Weiser is a versatile player who can play as a right winger, a right midfielder, or a right wingback. After growing up and playing for Bayern Munich’s second and first teams, Weiser struggled to find a club where he could excel. But in Bremen, Weiser finally seems to have found a home and will be hoping to continue this form throughout the season.

Under the microscope: Why Union Berlin’s recent slump is a wake-up...