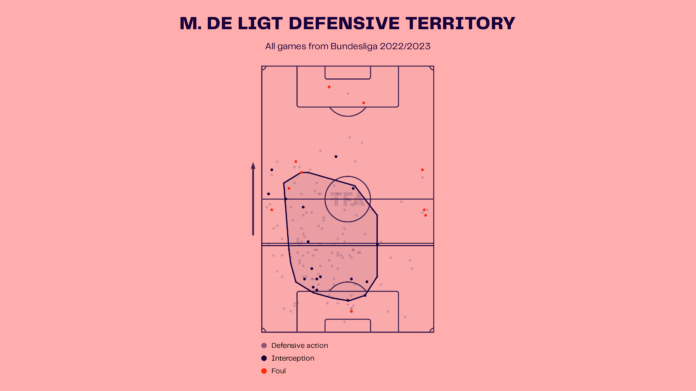 Matthijs De Ligt, considered one of the best centre-back prospects of his generation, was supposed to be one of the best defenders in the world by now. After leading Ajax into the Champions League semi-final at the age of 19, many European clubs came fishing for him. When he signed for Juventus after winning the prestigious “golden boy” award, the world was expecting him to be the next Chiellini or Bonnuci. However, things didn’t go according to plan for him in Turin. He went from being one of the most ferocious defenders to just another one. But the move to Bayern Munich this summer has seen an improvement in the Dutchman’s game. De Ligt has become a regular starter in Julian Nagelsmann’s team and has only missed four games in the Bundesliga. We look at some stats to understand how he has quickly become a central figure in Julian Nagelsmann’s team. 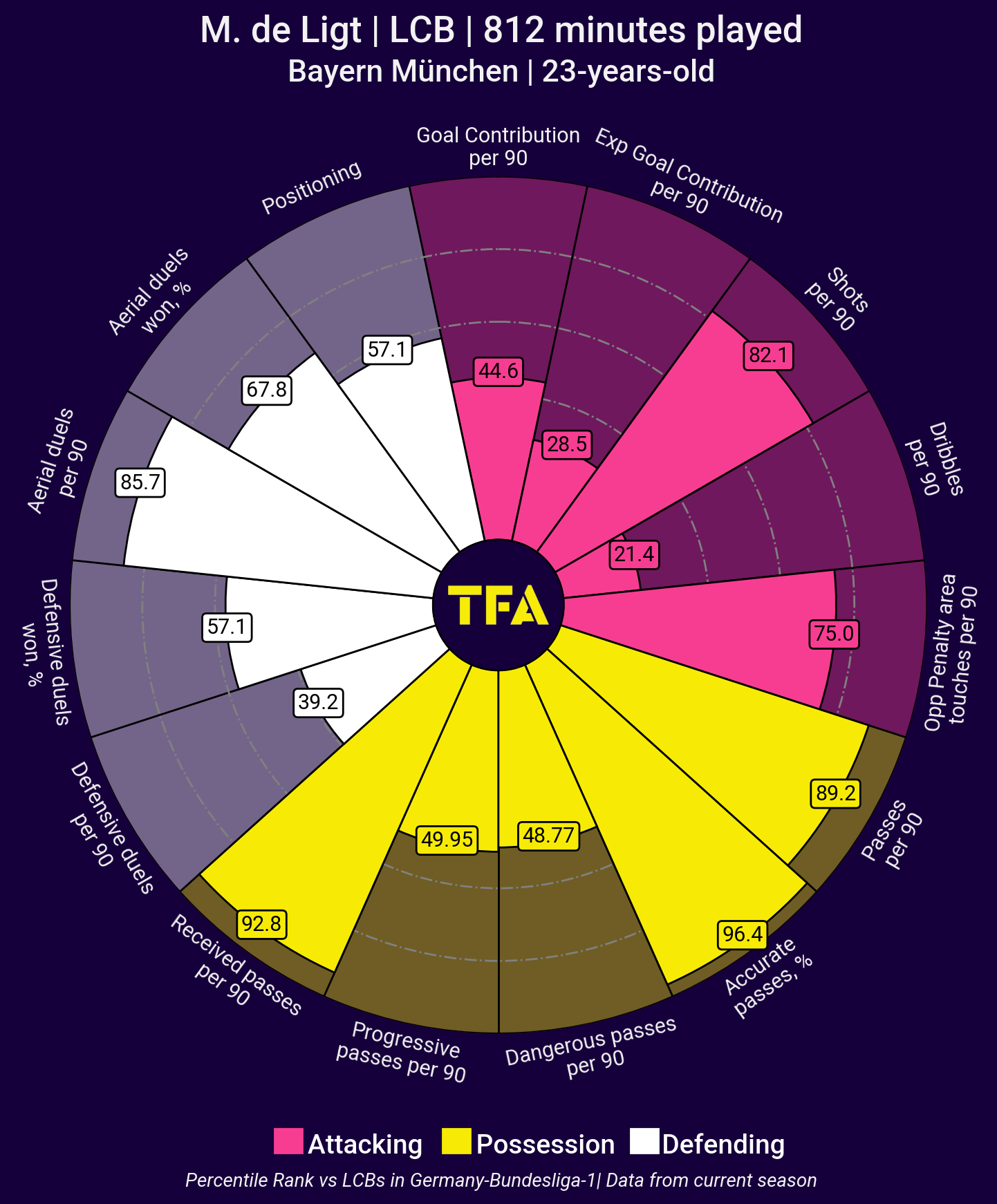 Matthijs De Ligt has played 12 matches this season in the Bundesliga, starting nine matches and coming off the bench in three. De Ligt has teamed up well with Dayot Upamecano at the back and has helped Bayern keep six clean sheets this season. The above visual shows the percentile rank of Matthijs De Ligt. He is a ball-playing defender and has excellent passing stats. He has ranked in the top 96.4 percentile for accurate passes and the top 92.8 percentile for passes received per game. Moreover, De Ligt is a strong presence in the air and is ranked in the top 85.7 percentile for aerial duels per 90 minutes. He has decent stats in defensive duels and positioning as well.

A rock at the back 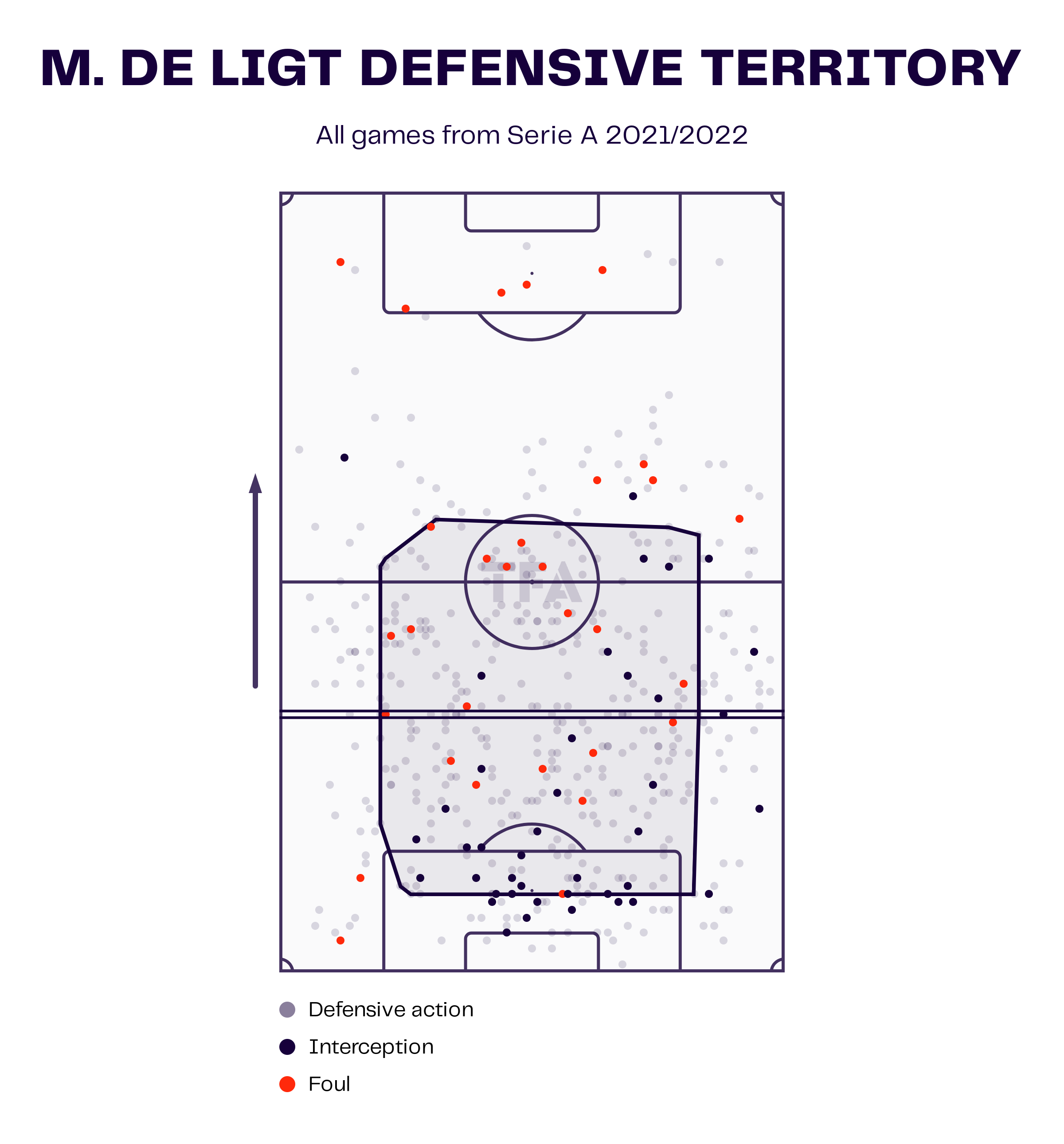 Matthijs De Ligt usually plays as a centre-back in a four-man backline for Bayern Munich. He has managed to revive some of his best qualities from his time at Ajax and is looking to lead once again. The 22-year-old has great strength and is never shy to take on a challenge.

This season, he has averaged 5.23 interceptions per game in the Bundesliga and has been a rock at the back. The high positioning of defenders in Nagelsmann’s system helps them win the ball back in the midfield or beyond, and De Ligt is an important part of that setup. He also makes around 4.83 defensive duels per game with a 69.4% success rate. Strongly built, the Dutchman is a strong presence in the air and wins around 4.63 aerial duels for them per game with a success rate of 65.2%. 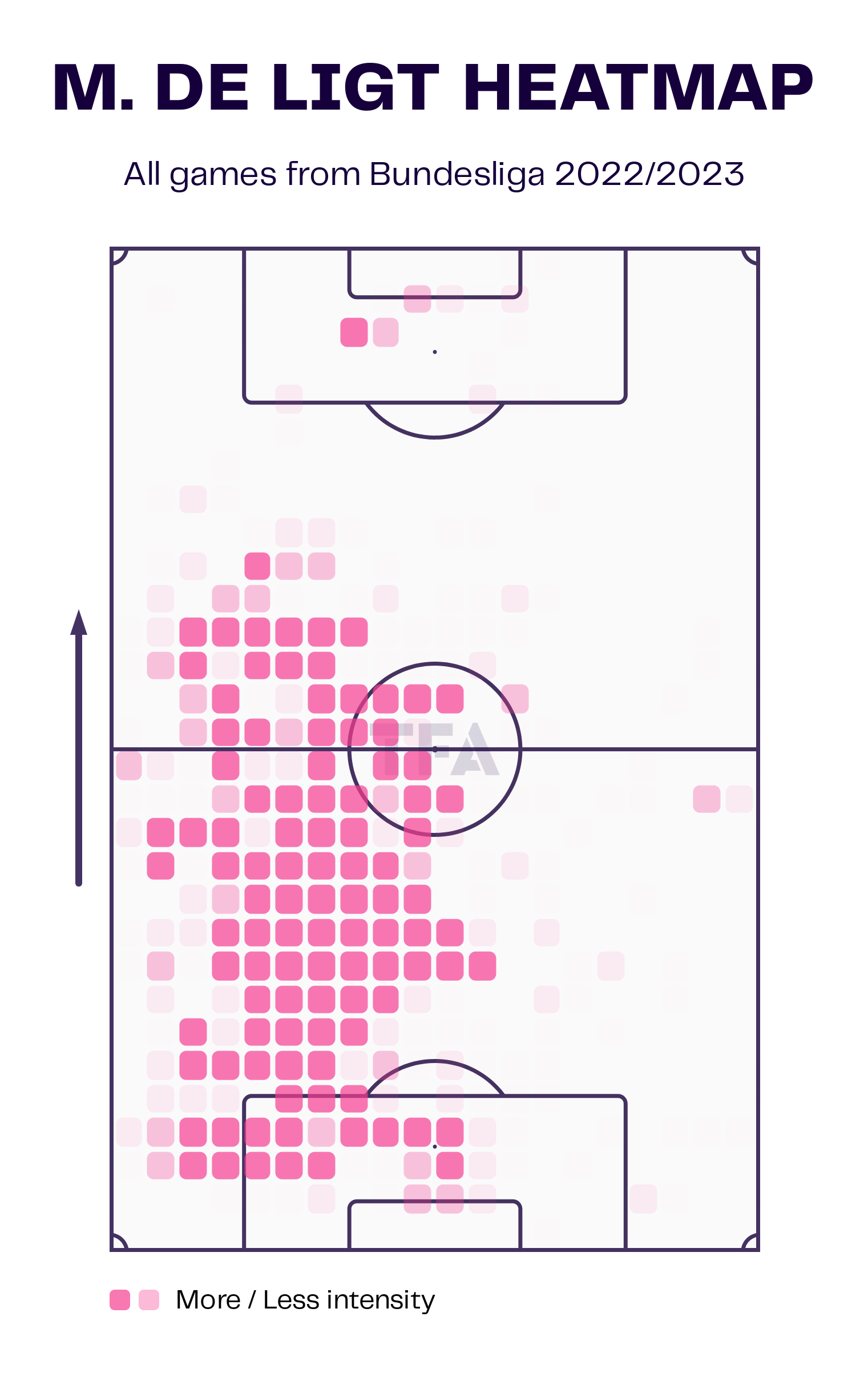 Playing in a system that deploys a high line of defence, Matthijs De Ligt covers so much space on the left side of the backline. As the heat map suggests, he moves up and down the pitch and sometimes even positions himself beyond the halfway line. This high positioning is important for Bayern to win the ball and transition into an attack. De Ligt stands like a rock and makes around 11.67 recoveries per game. The regaining of possession allows Bayern to continue the attack. 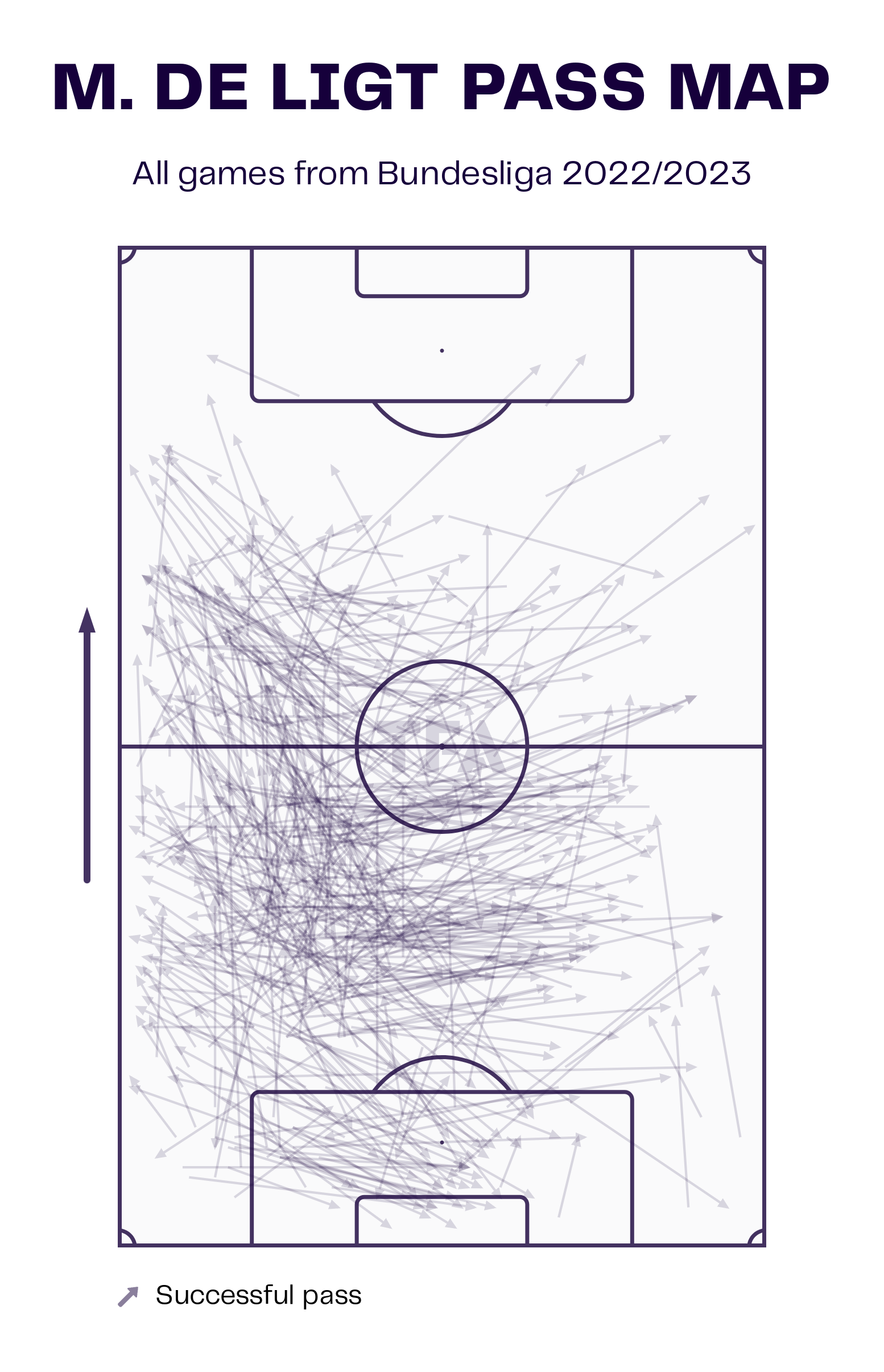 De Ligt was always a ball-playing defender, and that part of him did not prosper in Turin. But the move to Bayern has reignited that part of him as they play attacking football. De Ligt has an incredible passing accuracy of 94% and completes around 64 passes per game. Bayern is a team where passing the ball is important, so De Ligt fits easily into the system. He also makes around 7.24 passes into the final third with an accuracy of 76.9%. 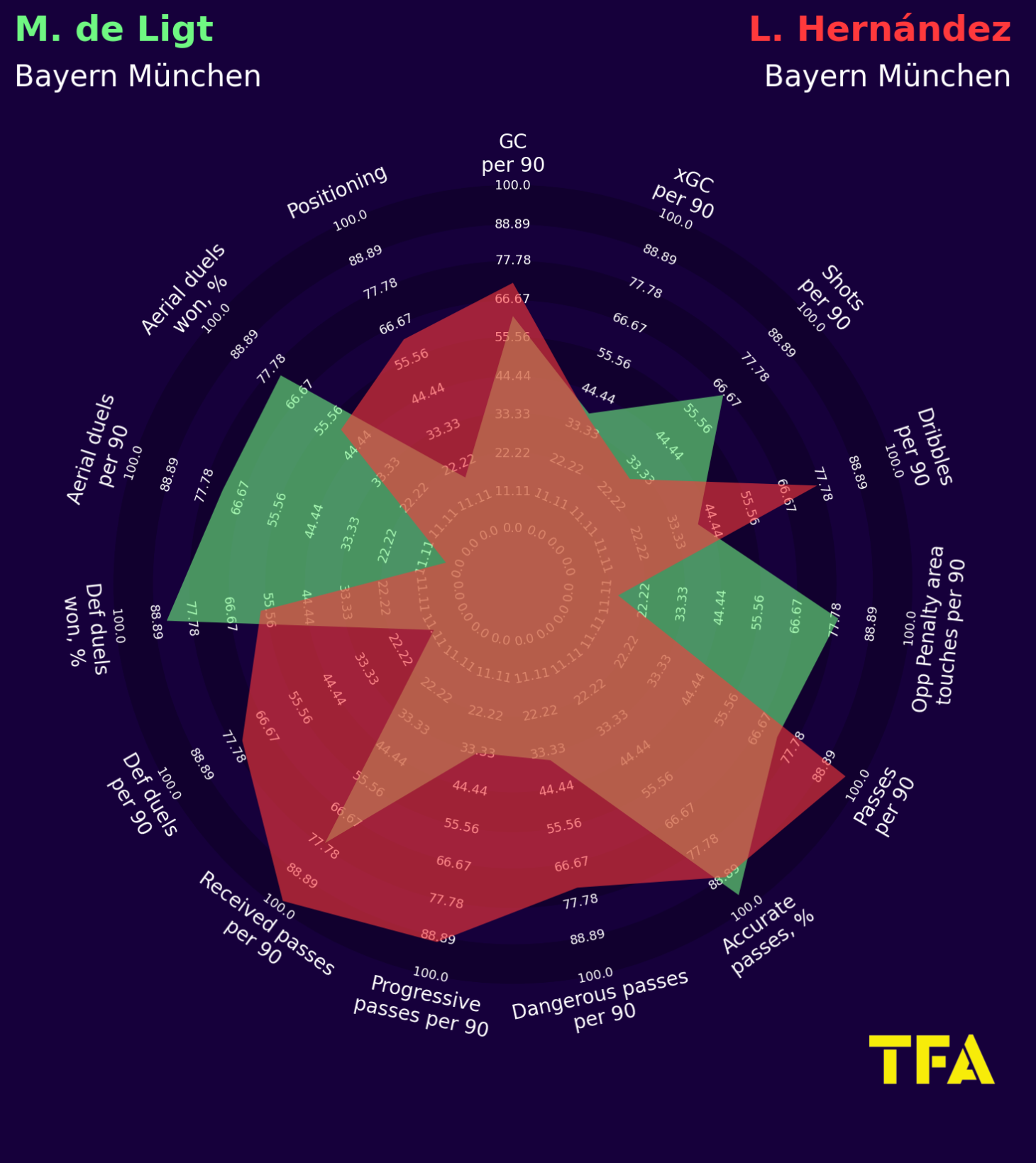 The above viz compares the radars of Matthijs De Ligt and his teammate Lucas Hernandez. An injury to the latter helped De Ligt get more starts in the Bundesliga, and the youngster has made the most of his chance. He has earned Nagelsmann’s trust and is now a regular choice. The Dutchman has better qualities when it comes to duels, both aerial and defensive, shots, and entry into the opponent’s penalty area. Hernandez has better stats in positioning, dribbles, and dangerous passes.

Matthijs De Ligt’s move to Bayern Munich is significant as he could revive his career at Allianz Arena. He is showing glimpses of becoming the ferocious defender he once was. Still just 22, De Ligt has a lot of time left in his tank and could become one of the best with the Bavarians. As of now, he has done enough to earn his coach’s trust and has become a regular starter and an important player for them.

Under the microscope: Why Dayot Upamecano is such an important figure...

Under the microscope: How Nico Schlotterbeck has provided stability at the...