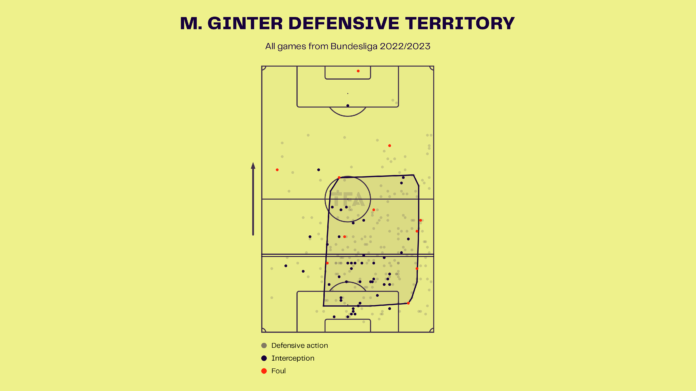 SC Freiburg is in second place in the Bundesliga with 30 points from 15 matches. They have won nine matches, drawn three, and lost three matches. They have scored 25 goals this season and conceded only 17. They are the team to concede the second-fewest number of goals, and one of the main players to man the defensive line is 28-year-old Matthias Ginter. Ginter is a calm presence in the defence who makes timely interceptions and tackles. His addition to the backline has given Freiburg an added sense of security at the back. Therefore, we look at his stats to understand how he has already become an important player for Freiburg in his first season with them. 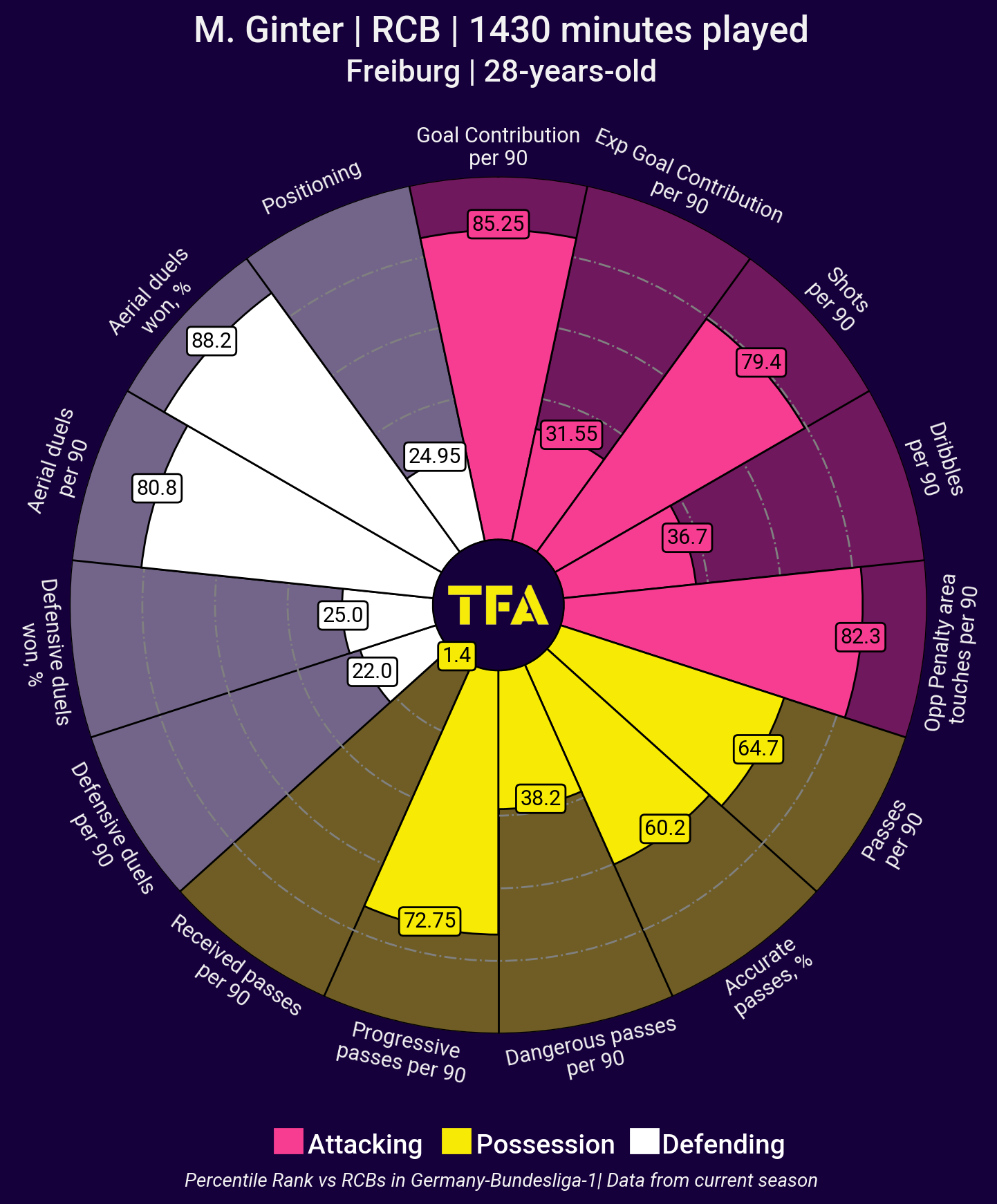 The above visual shows Matthias Ginter’s percentile rank compared to other right-centre-backs in the Bundesliga. He has been good at the back for Freiburg and has a good percentile score in all departments. Defensively, he has done well in aerial duels and is ranked very highly. He has not done that well in defensive duels compared to other centre- backs, but he has been efficient. Ginter has above-average stats for passing, with him being ranked in the top 60.2 percentile for accurate passes per 90 and the top 72.75 percentile for progressive passes per game. He also gets forward sometimes and has a high percentile rank for shots, goal contributions, and touches in the opponent’s penalty area. 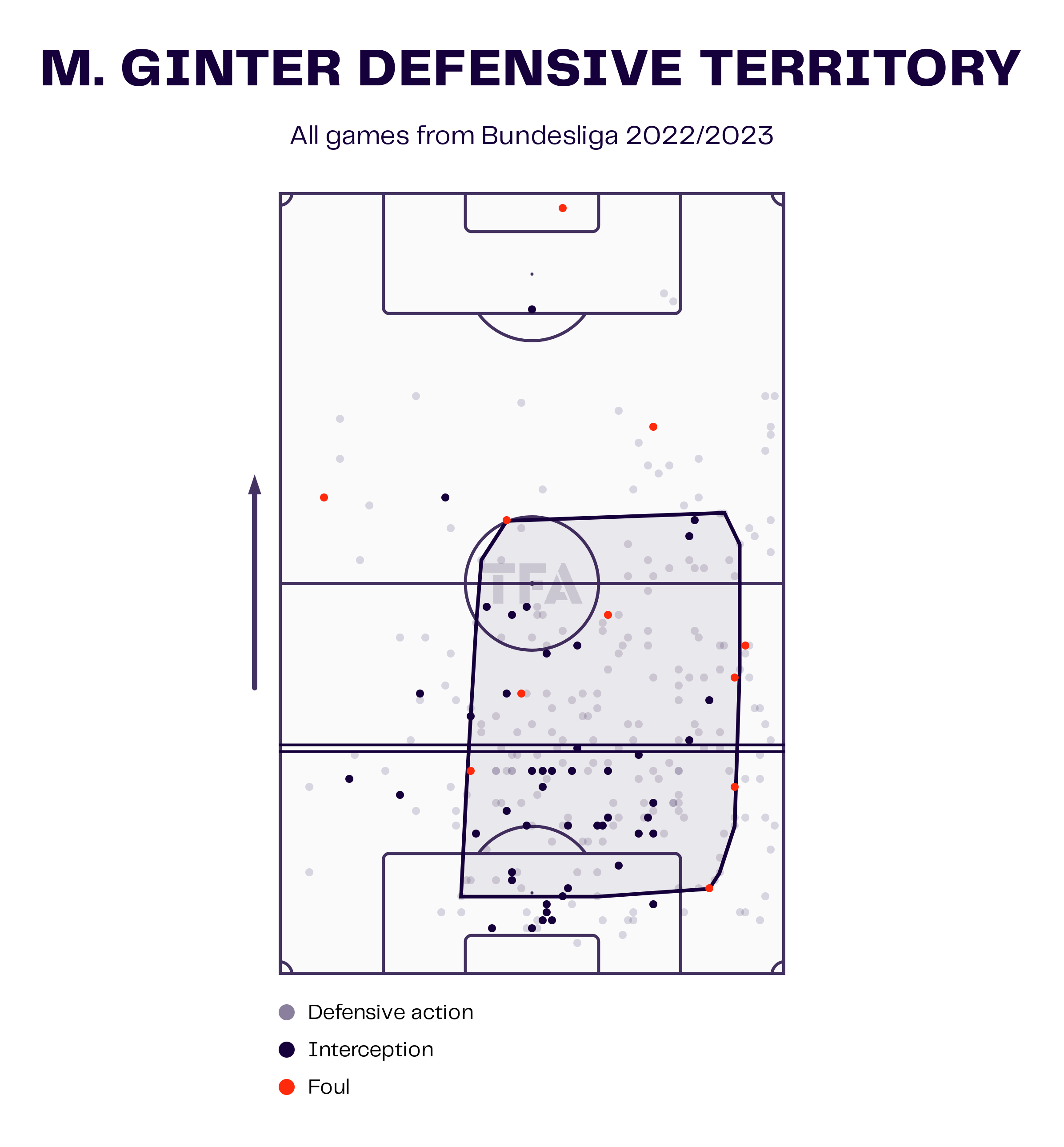 The above visual shows Matthias Ginter’s defensive territory from the current Bundesliga season. This season, he has made an average of 4.72 defensive duels per game with a win rate of 62.7%. Moreover, he is ranked in the top 88.2 percentile for aerial duels won and makes an average of 5.79 aerial duels per game with a 67.4% success rate. Ginter also makes around 5.29 interceptions per game. He plays as a right centre-back and guards the backline for Freiburg. 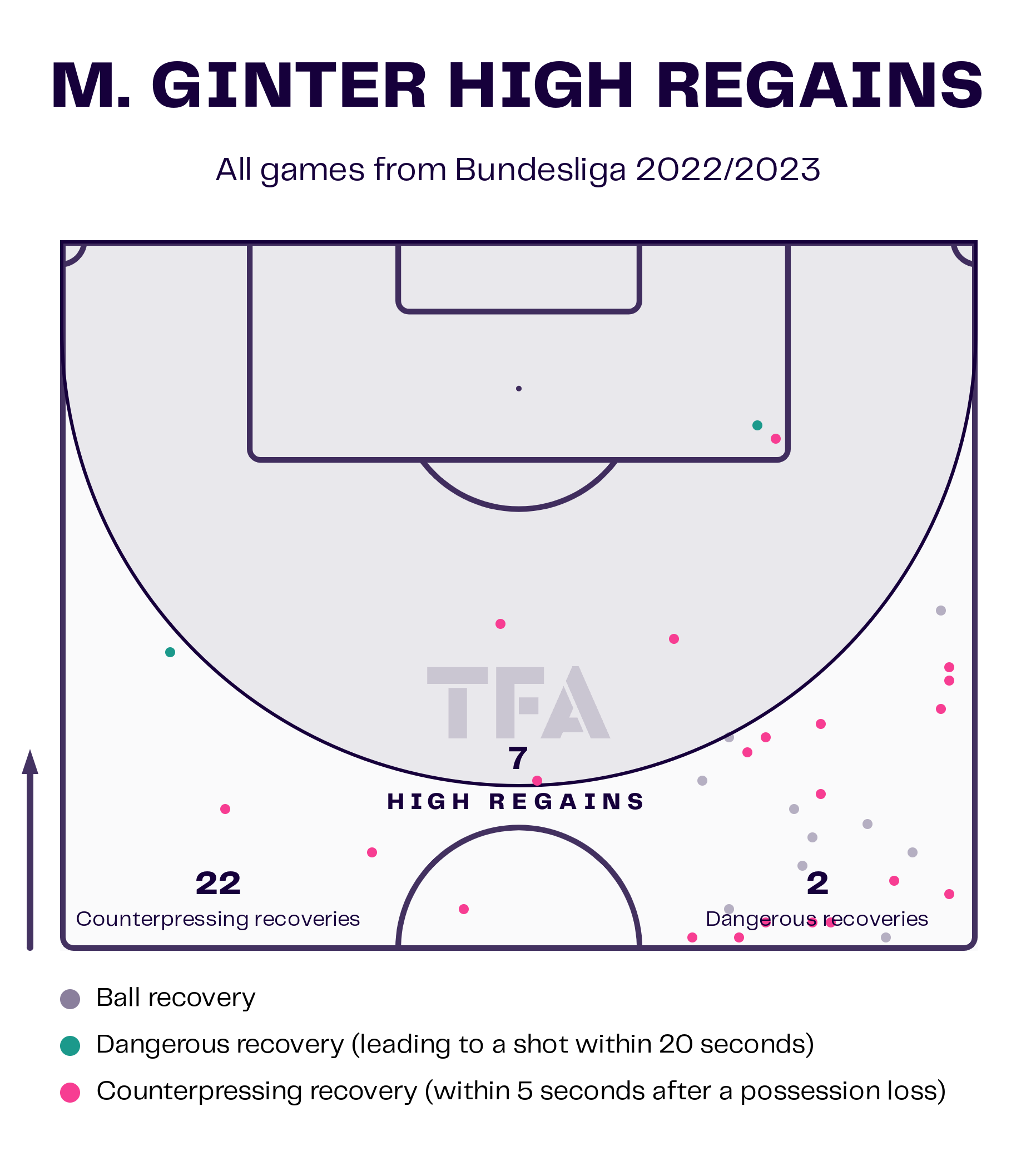 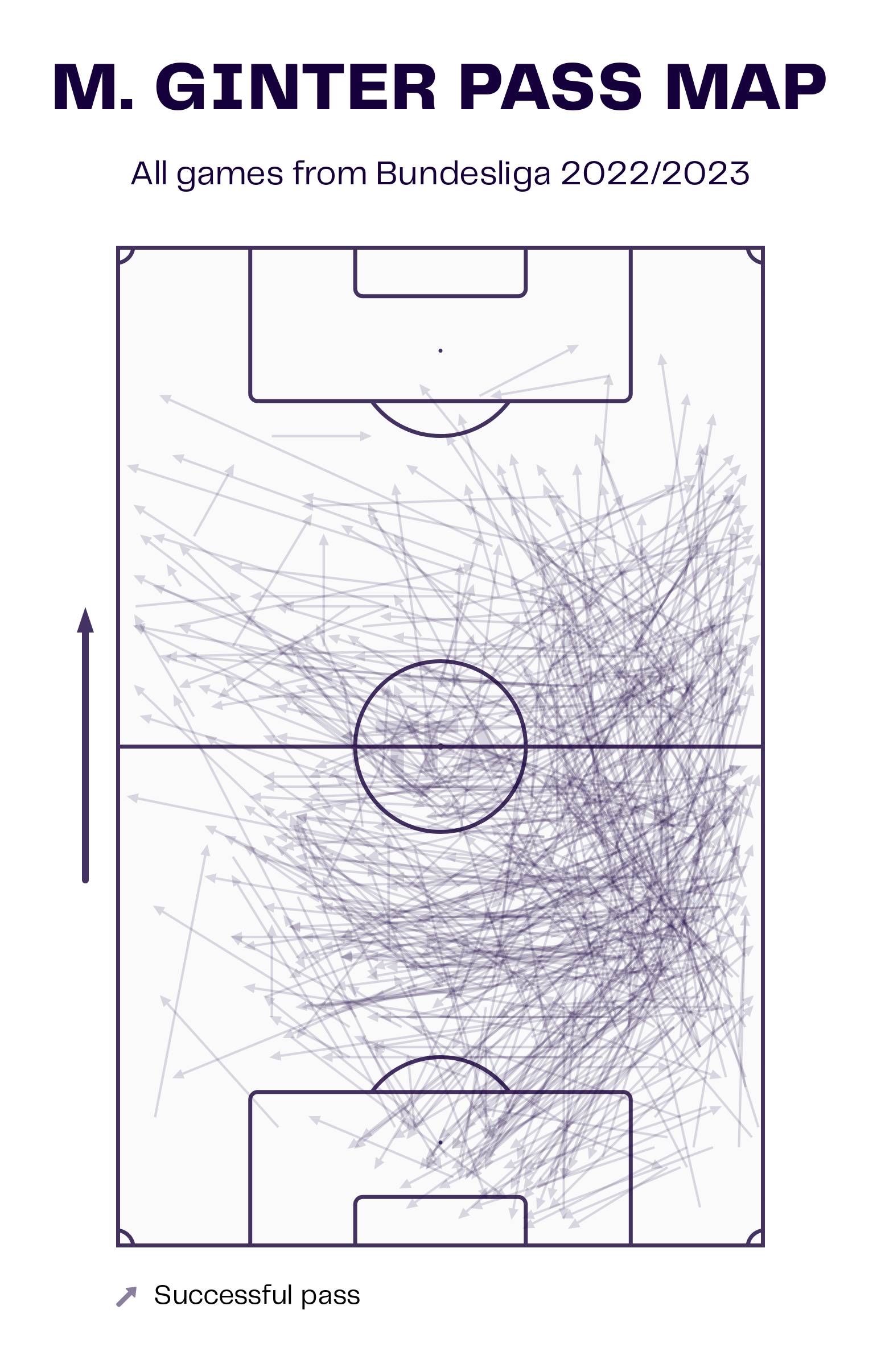 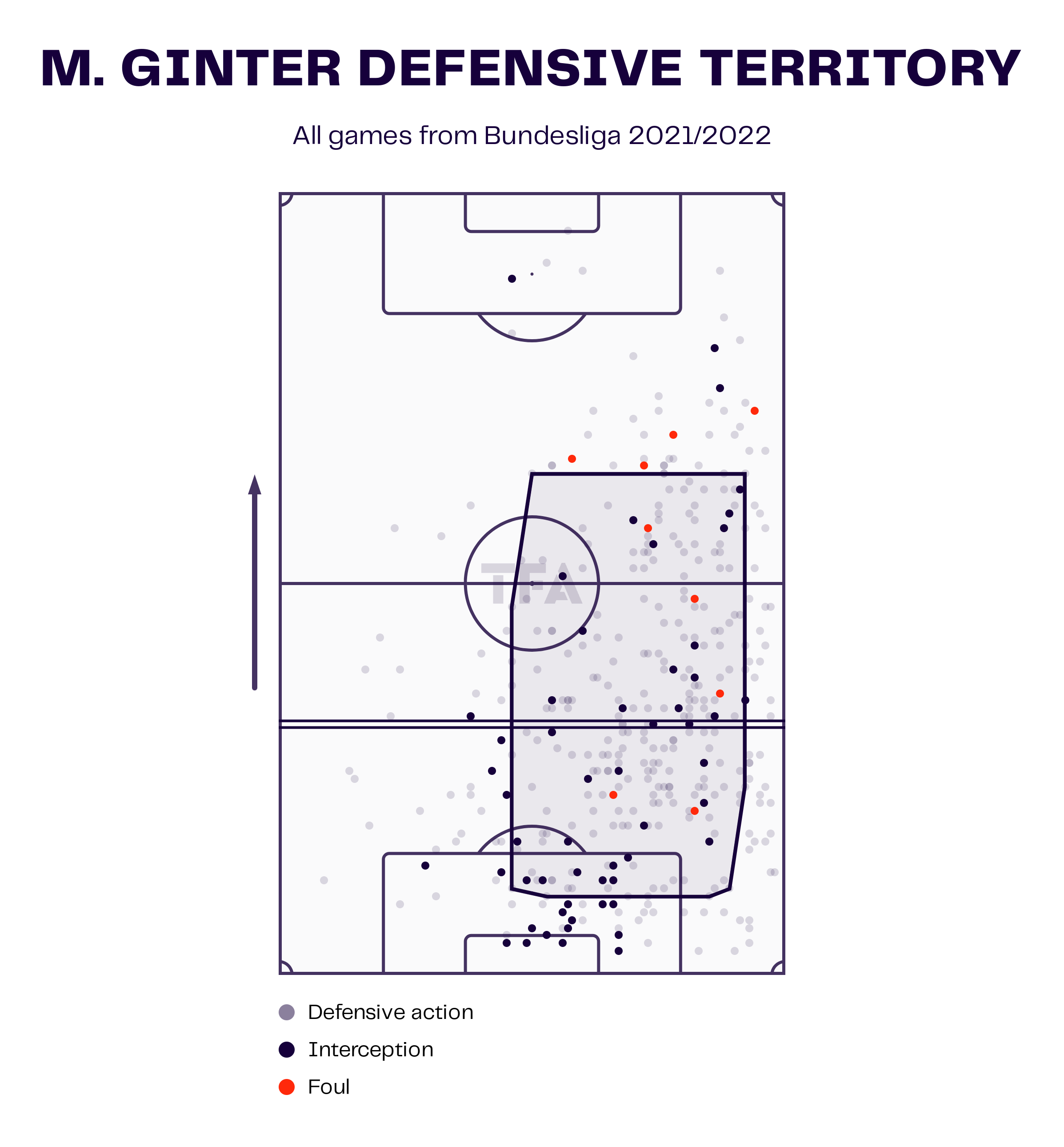 The above visual shows Matthias Ginter’s defensive territory from the previous Bundesliga season. Last season, he was with Borussia Monchengladbach and was an important part of their defensive setup. He made around 5.45 defensive duels per game with 68.5% success. This figure has seen a decline this season. But the number of aerial duels has increased from last year’s 4.66 aerial duels per game with 61.6% success. The average number of interceptions per game has also improved this season from last year’s 4.93 interceptions per game. 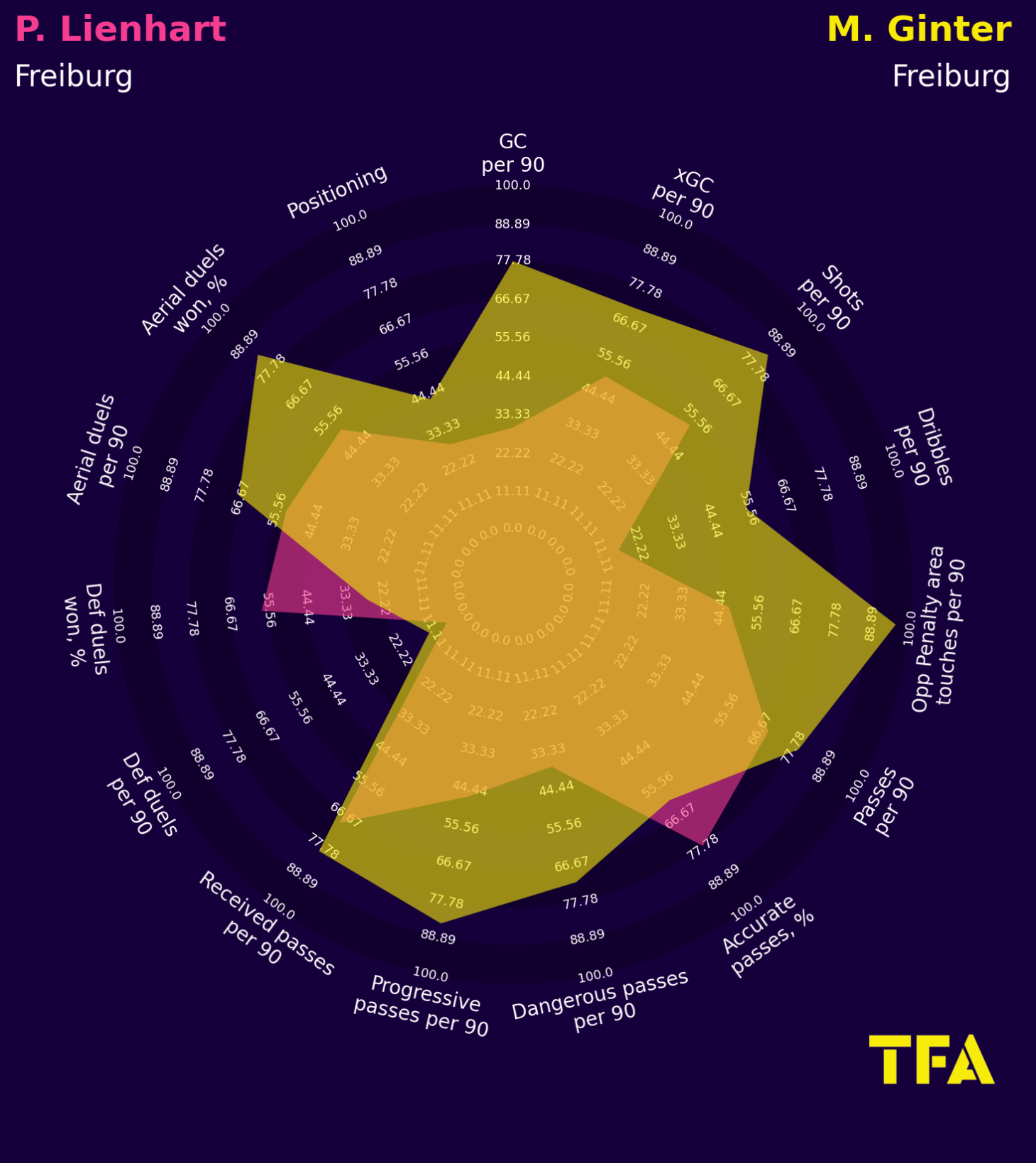 The above visual compares the radars of Matthias Ginter and his fellow teammate Philip Lienhart. The duo has been solid at the back for Freiburg and has played a big role for them. While Ginter has better stats in progressive passing, dangerous passing, shots, dribbles, and aerial duels, Lienhart has better stats in defensive duels and passing accuracy. Both will continue to be important for Freiburg this season.

Looking at the 1×2 market, the odds are likely to go up for Freiburg considering their form. Meanwhile, the underlines are expected to flourish in the over/under lines market as Ginter has helped Freiburg become solid defensively.

Matthias Ginter signed a deal with SC Freiburg in the summer and has become a starter right away. His presence in the back has given them added security and assurance. Freiburg’s defensive discipline has been worthy of an example, and the team management will be hoping that their number 28 will continue to provide good defensive services for them when the season restarts.

Data Pack: A draw for Portugal in their home game against...