Bayern Munich signed 17-year-old Mathys Tel from Rennes this summer for 30 million euros, and the youngster has not failed to impress. After the move to Munich in the summer, he was instantly called to train with the first team. Julian Nagelsmann has shown trust in him, and he has delivered as well. Even though he has only played in seven matches with limited minutes, he already has three goals for the Bavarians in the Bundesliga. His goal-scoring instincts have put a weight on his shoulders to be the successor to Robert Lewandowski. We take a look at some stats to understand if Mathys Tel being termed as “the new Lewandowski” is right or not. 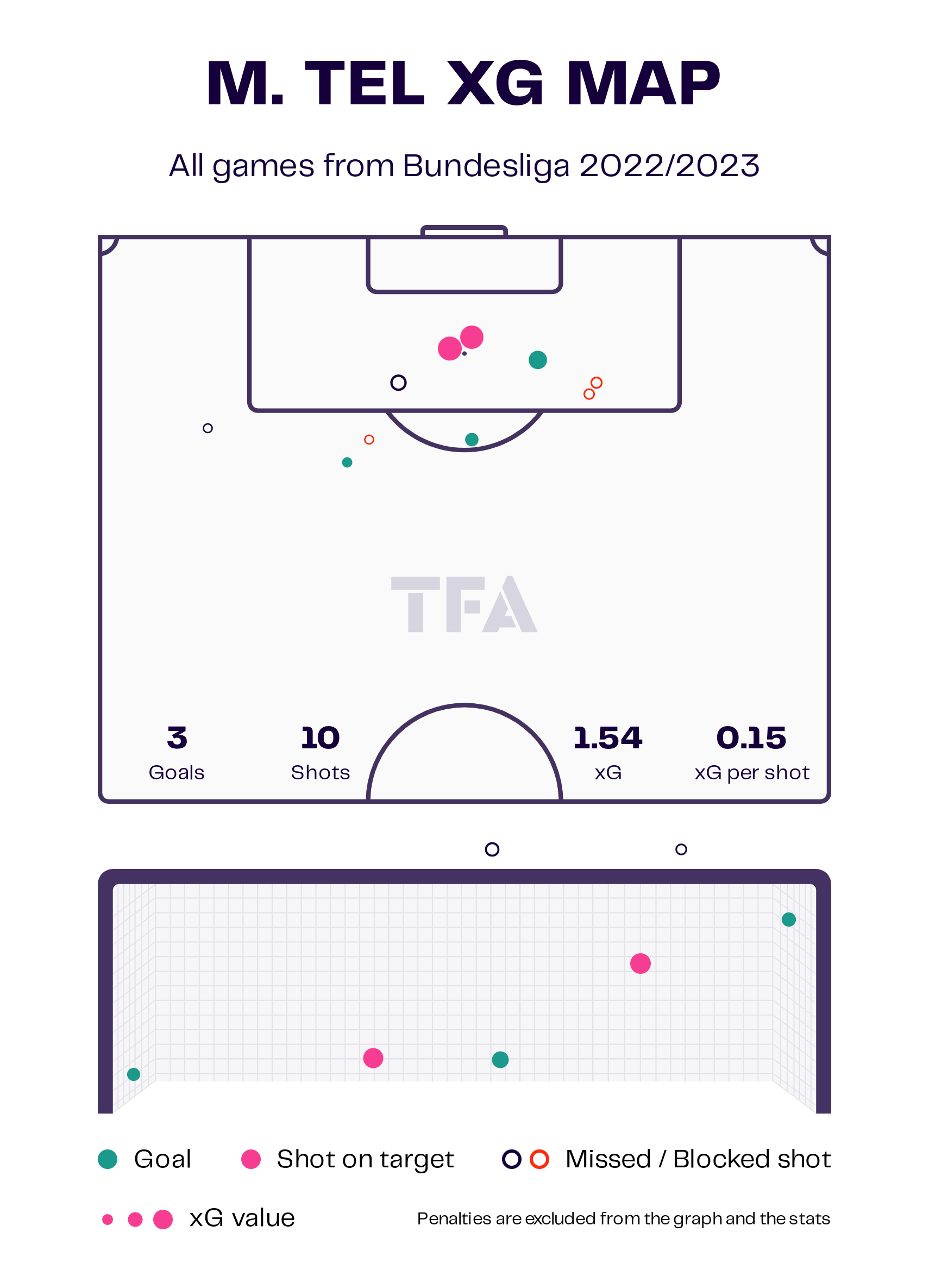 The first thing that comes to mind when you think of Lewandowski is goals, and if you have to be anywhere near as good as he was, you have to be a good goal scorer. Mathys Tel has scored three goals for Bayern this season. He has only played seven matches, but in those matches, he has looked deadly in front of the goal and has threatened the goalpost whenever he attacked. 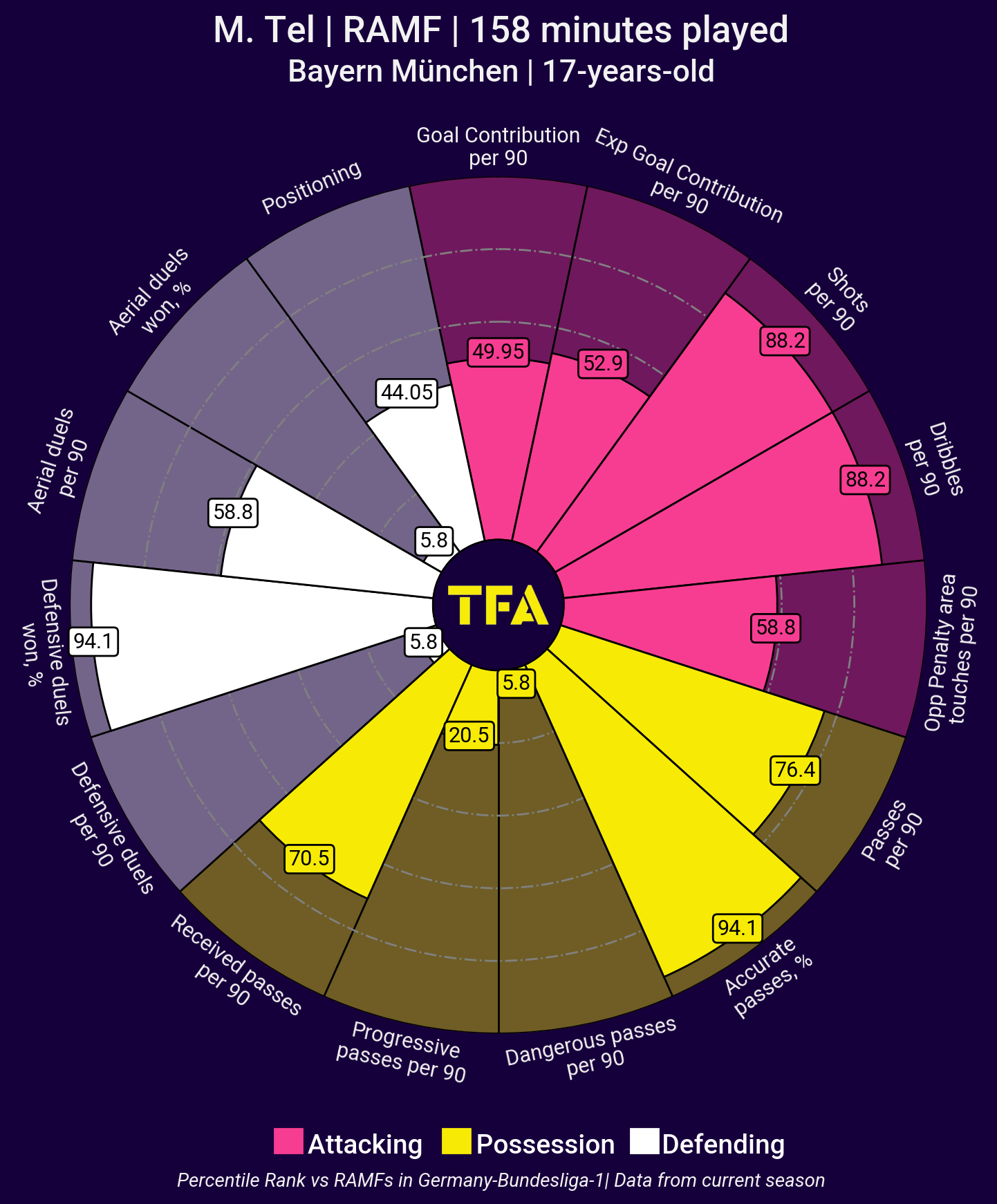 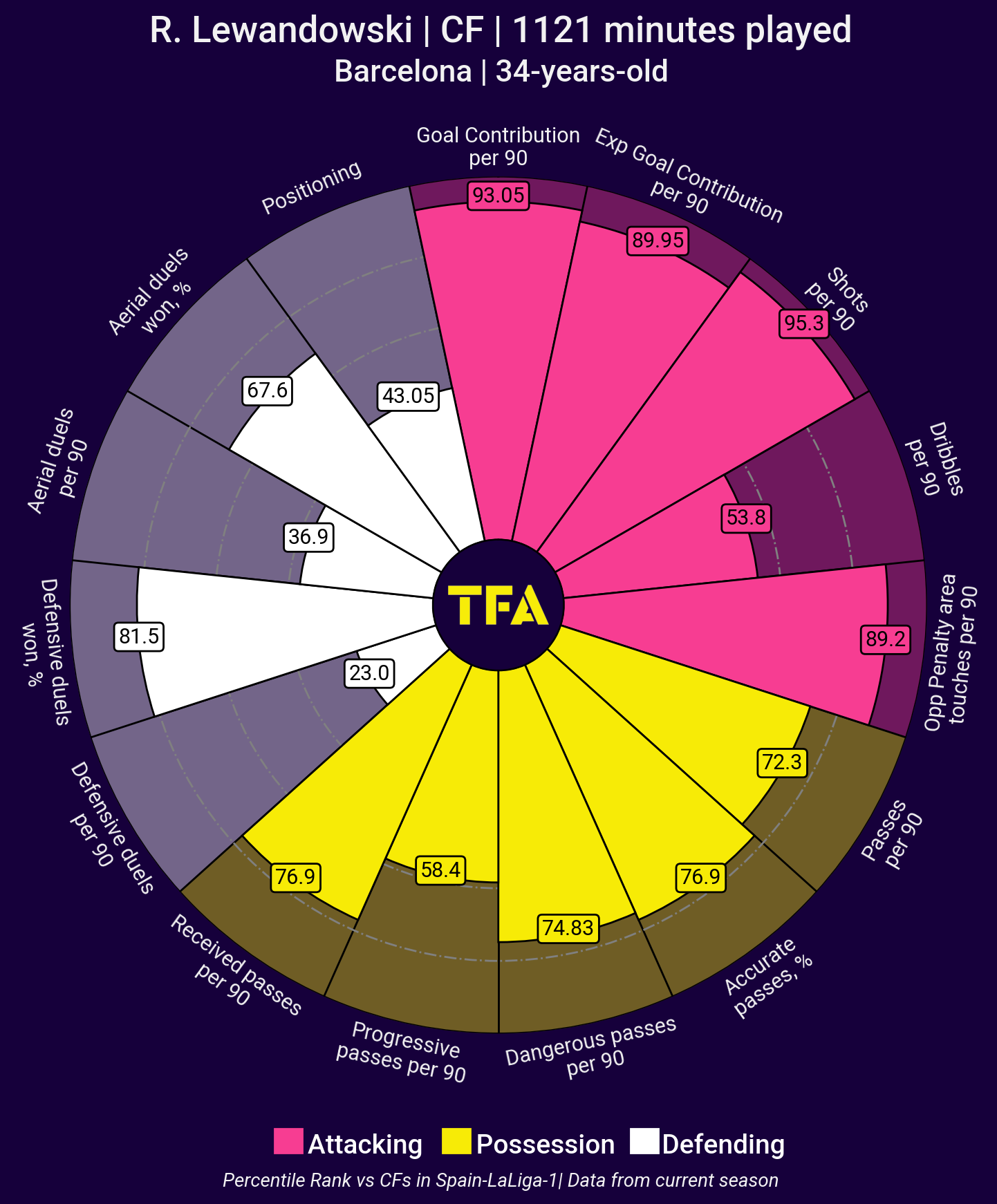 Robert Lewandowski, on the other hand, is more of a typical number nine. His nickname “fox in the box” perfectly suits his game style, as he constantly finds the right position in the box to finish off the chances. He is in the top 93.05 percentile in goal contributions, while Mathys Tel, even though he has not played many minutes, has not reached that level yet.

Another area where Tel needs to improve is his aerial dominance. Robert Lewandowski is one of the best when it comes to heading the ball and has a great record of scoring from headers as well. While Mathys Tel has played more as a midfielder, Nagelsmann has also used him as a striker. Therefore, Tel will have to work more on his aerial skills and convert some chances to cement his spot in the lineup. 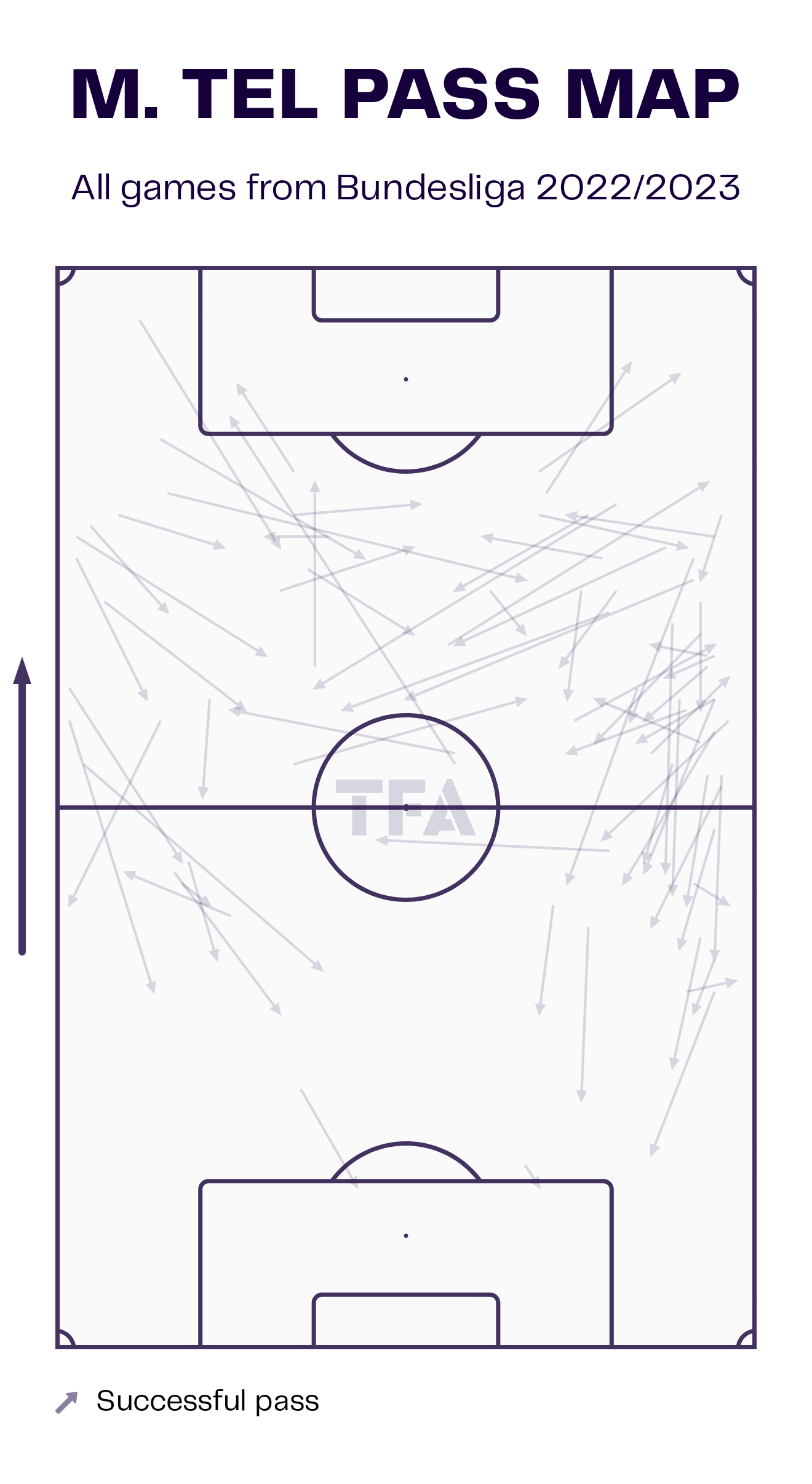 Mathys Tel has maintained a good passing record in his short stint at Bayern Munich. He has a passing accuracy of 90.1% and also participates in play in the final third. The 17-year-old has played both as a midfielder and as a striker. His brilliant ball control helps him build plays and take on challenges as well. 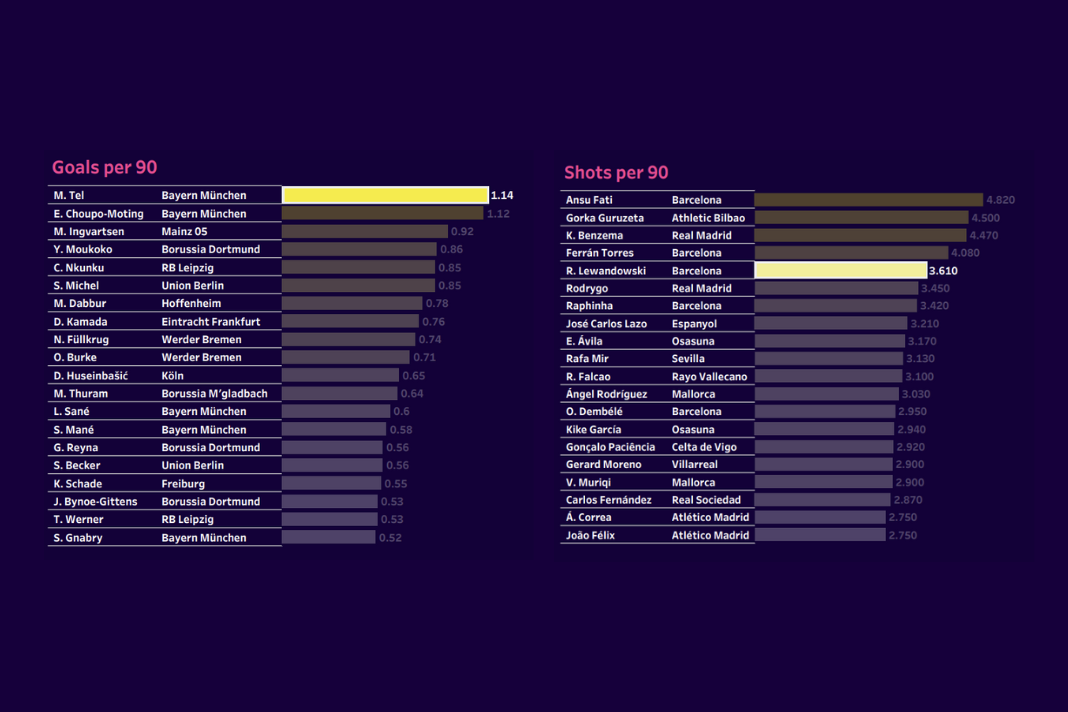 As the above benchmarking suggests, Mathys Tel is in the top 88.2 percentile of shots per game and has one of the best stats in the Bundesliga. He is second on the list, only behind his teammate Leroy Sane. The youngster has an average of 3.99 shots per 90 minutes with an accuracy of 50%. This season, he has a better shot-per-game record than Robert Lewandowski, who averages 3.61 shots per game. The 17-year-old has played only 158 minutes this season but has already looked very impressive.

Mathys Tel has been a great find for Bayern Munich. He has adjusted well to senior-level football and has the potential to reach great heights. But his profile and stats, at least so far, make it difficult, and unfair to an extent, to draw comparisons to an established number nine like Robert Lewandowski. Whether he will go on to be “the next Lewandowski” is yet to be seen, but he certainly has the potential to reach stardom, and his numbers during his short outing so far are indicative of a potential superstar.

Finding the best strikers in the Bundesliga – data analysis

The Data Zone: Brazil on top against Colombia in the Copa...