Borussia Mönchengladbach stormed to a 3-0 away win against Hoffenheim this weekend at the Rhein-Neckar-Arena. This left them one point away from the summit of the Bundesliga, whilst Hoffenheim slumped to their third defeat in the league. It was Mönchengladbach’s third away win in the league this season, and Hoffenheim have struggled this season following a ninth-place finish in the 2018/19 season. After six games they find themselves just two points ahead of the relegation zone. This tactical analysis looks at the tactics used by both Marco Rose and Alfred Schreuder as Mönchengladbach registered their fourth win of the season. 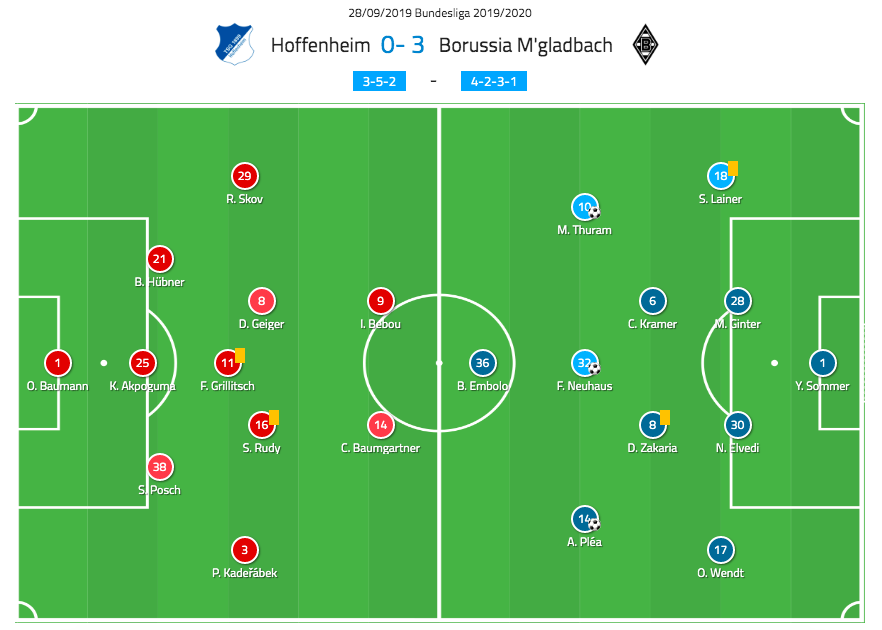 Hoffenheim fielded a 3-5-2, playing three at the back for the fourth time this season. They were without centre-forward Ishak Belfodil, so Christoph Baumgartner came into the starting XI. Kevin Vogt was also unavailable for this fixture, therefore Hoffenheim continued their trend of not playing the same backline in any two games this season. This time they used Stefan Posch, Kevin Akpoguma and Benjamin Hübner as a back three.

Mönchengladbach played a 4-2-3-1 for the first time since their 3-1 loss at home to RB Leipzig at the end of August. Marcus Thuram returned to the starting lineup, whilst Christoph Kramer came in for László Bénes in centre-midfield.

Hoffenheim had 18 shots over the contest, and with an xG of 1.25 will count themselves unlucky not to have scored. Despite their high number of shots in this game, they managed only four shots on target.