VFL Wolfsburg drew with Hoffenheim 1-1 at the Volkswagen Arena in the Bundesliga. Alfred Schreuder’s Hoffenheim took an early lead through Sebastian Rudy’s sublime volley before Admir Mehmedi equalised for Wolfsburg just before the half-time whistle. Both sides contested the second half with intensity but neither could find the winner and had to settle for a point each. This tactical analysis aims to look at the key tactical points from the game and the tactics employed by each side. 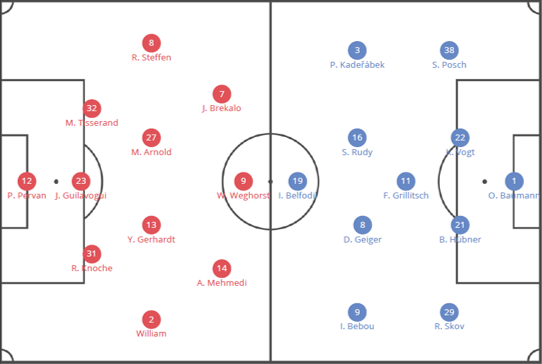 Wolfsburg lined up in a 3-4-3 formation. Joshua Guilavogui continued in his role as the central defender in a three-man defence. He was flanked by Robin Knoche and Marcel Tisserand. Renato Steffen and William played as the wing-backs on the left and right-wing respectively. In midfield, Oliver Glasner opted for a pairing for Maximilian Arnold and Yannick Gerhardt. Wout Weghorst led the attack with Mehmedi and Josip Brekalo playing on the flanks.

Schreuder’s Hoffenheim employed a 4-3-3. The defensive pairing comprised of the ever-reliable Benjamin Hübner and Kevin Vogt. In midfield, Rudy played in a trio with Florian Grillitsch and Dennis Geiger. Ishak Belfodil played as the striker with Ihlas Bebou on the left-wing and interestingly Pavel Kadeřábek playing as the right-winger. Robert Skov played as a left-back in what was a very surprising decision.

If you want to read the full article then head on over to our dedicated analysis site, totalfootballanalysis.com, or click HERE.

If you love tactical analysis, then you’ll love the digital magazines from totalfootballanalysis.com – a guaranteed 100+ pages of pure tactical analysis covering topics from the Premier League, Serie A, La Liga, Bundesliga and many, many more. Buy your copy of the September issue for just ₤4.99 here

Who Is Going To Be The Top Scorer In The Bundesliga...