With the likes of RB Leipzig, Borussia Mönchengladbach, and Bayern Munich beginning to hit their stride as the Bundesliga comes towards its annual winter break, the pressure is mounting on the chasing pack to stay in touch. Two unlikely candidates for the title at the beginning of the season were Schalke and Freiburg, however, a win for either side in this fixture would still leave the victor within striking distance of the leaders, particularly for Schalke. A 2-2 draw certainly suited the home side better than it did Freiburg with visitors now 11 points adrift of the top of the table, whereas Schalke are still just about within reach, seven points behind league leaders Leipzig.

Despite taking a lead in the 27th minute thanks to Suat Serdar, and going into halftime 1-0 up, Schalke endured a torrid spell for the first 20 minutes of the second half, as the xG dynamics graph below shows.

Freiburg capitalized and went 2-1 up, goals coming from Nils Petersen and Vincenzo Grifo. Yet Schalke rallied and their blushes were spared courtesy of an 80th-minute equalizer from 19-year old Ahmad Kutucu.

This tactical analysis will give an in-depth analysis of the tactics used by Schalke’s David Wagner and Freiburg’s Christian Streich in this closely-fought Bundesliga fixture. 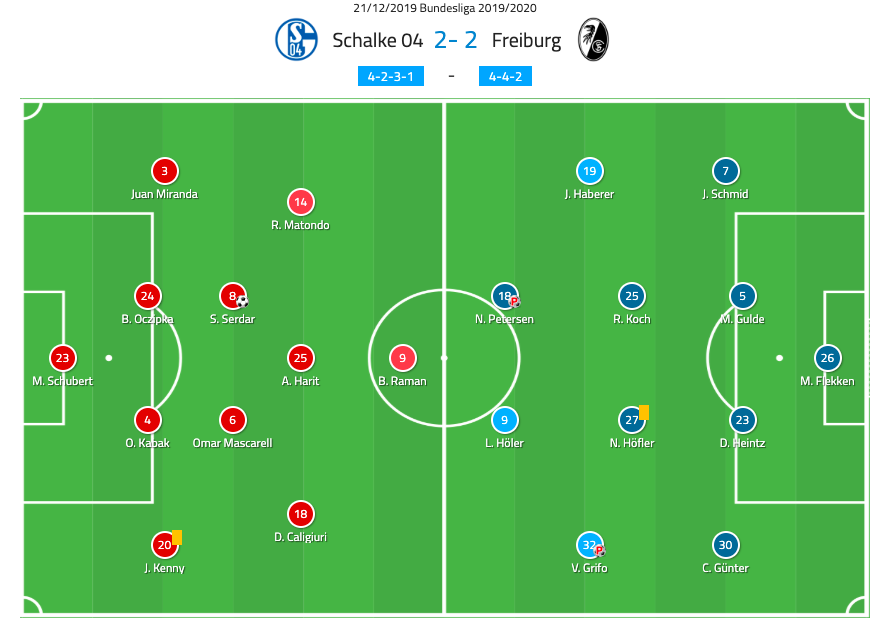 Schalke lined up in a 4-2-3-1 formation. Alexander Nübel was once more absent in goal, following his horror challenge on Eintracht Frankfurt’s Mijat Gaćinović which resulted in a red card and a four-match ban. Max Schubert replaced him against Wolfsburg and kept his starting berth for this game. In defence, Jonjoe Kenny continued at right-back with Ozan Kabak and Bastian Oczipka at centre-back, whilst Juan Miranda came in at left-back. In midfield Serdar and Omar Mascarell were truly excellent together playing as a double-pivot with Amine Harit playing in front of them. Rabbi Matondo, and Daniel Caligiuri occupied the wings either side of Hair. Benito Raman played as a lone striker.

Freiburg played a 4-4-2 with Mark Flekken in goal. Jonathan Schmid and Christian Günter occupied the full-back positions, whilst Manuel Gulde and Dominique Heintz were partnered at centre-back. Robin Koch was preferred in centre-midfield, as opposed to centre-back, and played alongside Nicolas Höfler, with Grifo and Janik Haberer on either wing. The impressive Petersen partnered Lucas Höler up front.

If you want to read the full tactical breakdown of this game, head over to totalfootballanalysis.com