VFL Wolfsburg defeated Eintracht Frankfurt 2-0 in Saturday’s Bundesliga fixture. Goals from Wout Weghorst and João Victor ensured that Oliver Glasner’s side left Frankfurt with three points despite playing the entire second half with only 10 men after Marcel Tisserand was sent off for the visitors. Eintracht Frankfurt struggled to cope with Wolfsburg’s intensity from the start of the game and despite having a numerical advantage in the second half, could not overturn the deficit. This tactical analysis looks at the approaches of both sides and the reasons behind the result. 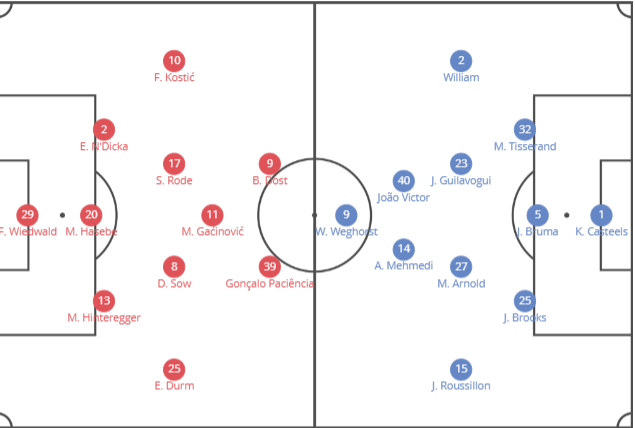 Eintracht Frankfurt lined up in a 3-4-1-2 formation with Bas Dost and Gonçalo Paciência leading the attack. Mijat Gaćinović played as the central attacking midfielder in front of Sebastian Rode and Djibril Sow. Erik Durm and Filip Kostić were selected as the wing-backs. In defence, the trio of centre-backs comprised of Martin Hinteregger, Makoto Hasebe and Evan N’Dicka.

Wolfsburg also lined up with three central defenders comprising of Tisserand, Jeffrey Bruma and John Brooks. Josuha Guilavogui played with Max Arnold in midfield as William and Jérôme Roussillon were the wing-backs. Wout Weghorst led the attack with João Victor and Admir Mehmedi playing as wide-forwards.

Under the microscope: How Marco Reus can bring Dortmund back to...