Three points was all that separated Eintracht Frankfurt and TSG 1899 Hoffenheim last season, with Frankfurt finishing on 54 points and in seventh place, Hoffenheim just behind in ninth place.

Frankfurt won both games against Hoffenheim last season, 2-1 and 3-2, respectively. However, with Hoffenheim scoring in every away game in the Bundesliga last season, and Frankfurt’s attack being severely weakened after the sale of the prolific Luka Jović and Sebastian Haller, Hoffenheim would have been confident going into the game at the Commerzbank-Arena.

This tactical analysis will look at how Frankfurt managed to prevent Hoffenheim from capitalising on their possession and keep a clean sheet as they won 1-0. 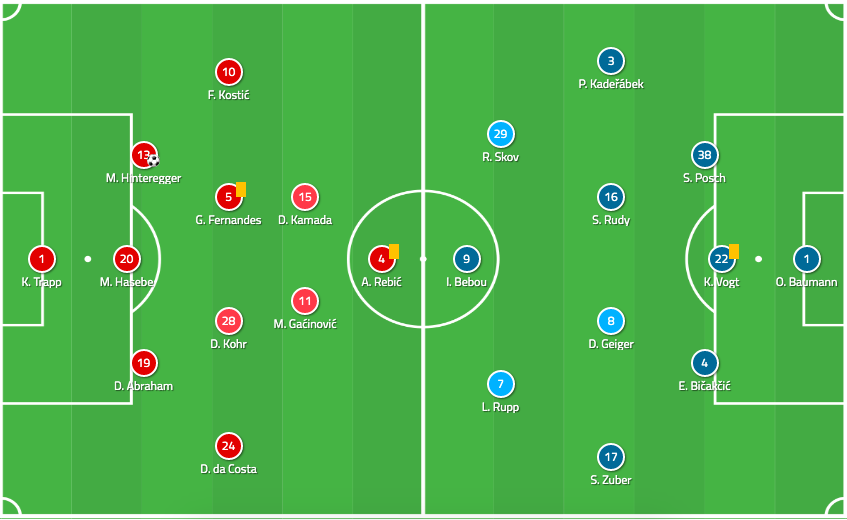 Both sides lined up with near-identical formations, with the 3-4-3 being utilised in some form. The only difference was that Frankfurt manager Adi Hütter, opted to drop both Daichi Kamada and Mijat Gaćinović, behind Ante Rebić. Hoffenheim Head Coach Alfred Schreuder used Lukas Rupp, alongside new signings Robert Skov and Ihlas Bebou as a front three.

It was a huge opportunity for Kamada to impress, with the impending signing of Bas Dost meaning Rebić will likely revert to the left.

How the early goal affected the game

Set pieces were a theme throughout the game for Frankfurt. They obviously thought that Hoffenheim were susceptible to an aerial threat. It took only 34 seconds for Frankfurt centre-back Martin Hinteregger to find himself free in the 18-yard-box. Hoffenheim right-wing-back Pavel Kadeřábek was given the task of marking him, and his body position, with his back to the ball meant Hinteregger was able to read the delivery and hammer home the cross with his left boot. In the below analysis we can see Kadeřábek is looking at Hinteregger as the ball is delivered.

To read the rest of this tactical analysis, go here

Inside Union Berlin’s Rise to the Top of the Bundesliga