Bayer Leverkusen hosted Schalke this weekend in the Bundesliga, in what was a “six-pointer” game. Despite an even share of possession, Bayer had by far the better chances and came out as 2-1 winners, despite a manic final 10 minutes. This tactical analysis looks at the tactics used by both Peter Bosz and David Wagner as their sides battled it out. 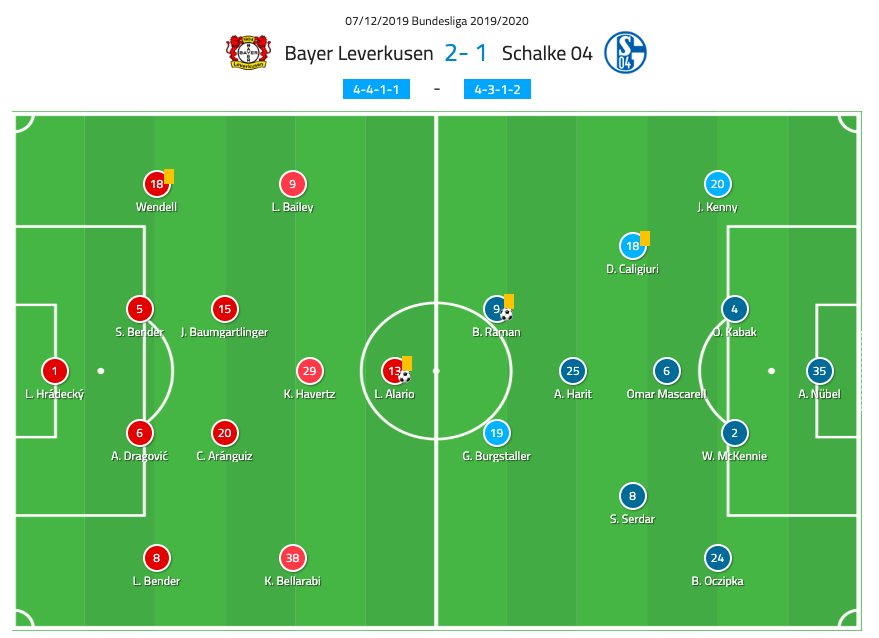 Bosz fielded an attacking 4-4-1-1 with Kai Havertz playing behind Lucas Alario. Leon Bailey and Karim Bellarabi manned the wings, whilst Julian Baumgartlinger and Charles Aránguiz played in central midfield. The back four was comprised of Wendell and Lars Bender in the full-back positions, Sven Bender and Aleksandar Dragović were paired in central-defence, whilst Lukáš Hrádecký was in goal.

Schalke fielded a 4-3-1-2 with Guido Burgstaller pairing Benito Raman in the forward line, with Amine Harit sitting just behind them. There was little width in Schalke’s team (they attempted just three crosses over the course of the game), and they played a central midfield three comprising of Omar Mascarell at the heart, with Daniel Caliguiri and Suat Serdar either side. In defence Jonjoe Kenny and Bastian Oczipka were in the full-back positions with Winston McKennie and Ozan Kabak sitting at centre-back in front of goalkeeper Alexander Nübel.

Schalke were disappointing, with little imagination or innovation in their passing game, and they struggled to impose themselves on Leverkusen. Their attacking play was stifled by Leverkusen’s defensive efforts, and it was only once Leverkusen had momentarily switched off following their second goal that Harit was finally able to find space on the ball before playing a killer pass opening up the host’s defence.