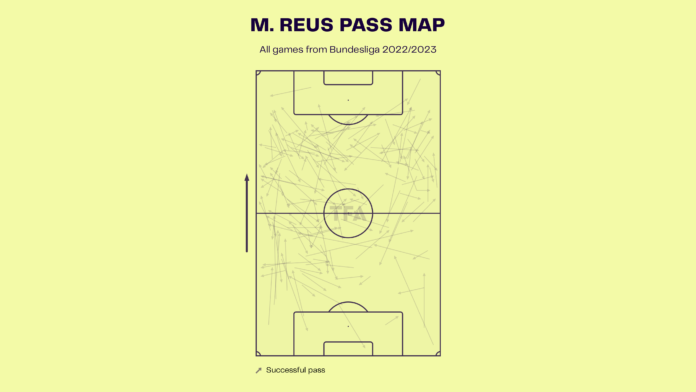 Borussia Dortmund has developed many brilliant players over the years and one of the most loyal ones who hasn’t left the club for another is Marco Reus. The 33-year-old has been an important player for a long time and has served the club well. However, his injuries have kept him out of major tournaments like the World Cup. Reus got injured weeks before the World Cup and missed it again. But his return is good news for all Dortmund fans, as he will have a big role to play for Dortmund in the title race. They are currently in sixth place in the Bundesliga with 25 points from 15 matches. The Dortmund captain is everything a coach needs. With his brilliant passing, attacking, and footballing brain, his contribution is invaluable to the team. Therefore, we look at some stats to see how Reus can bring Dortmund back into title contention. 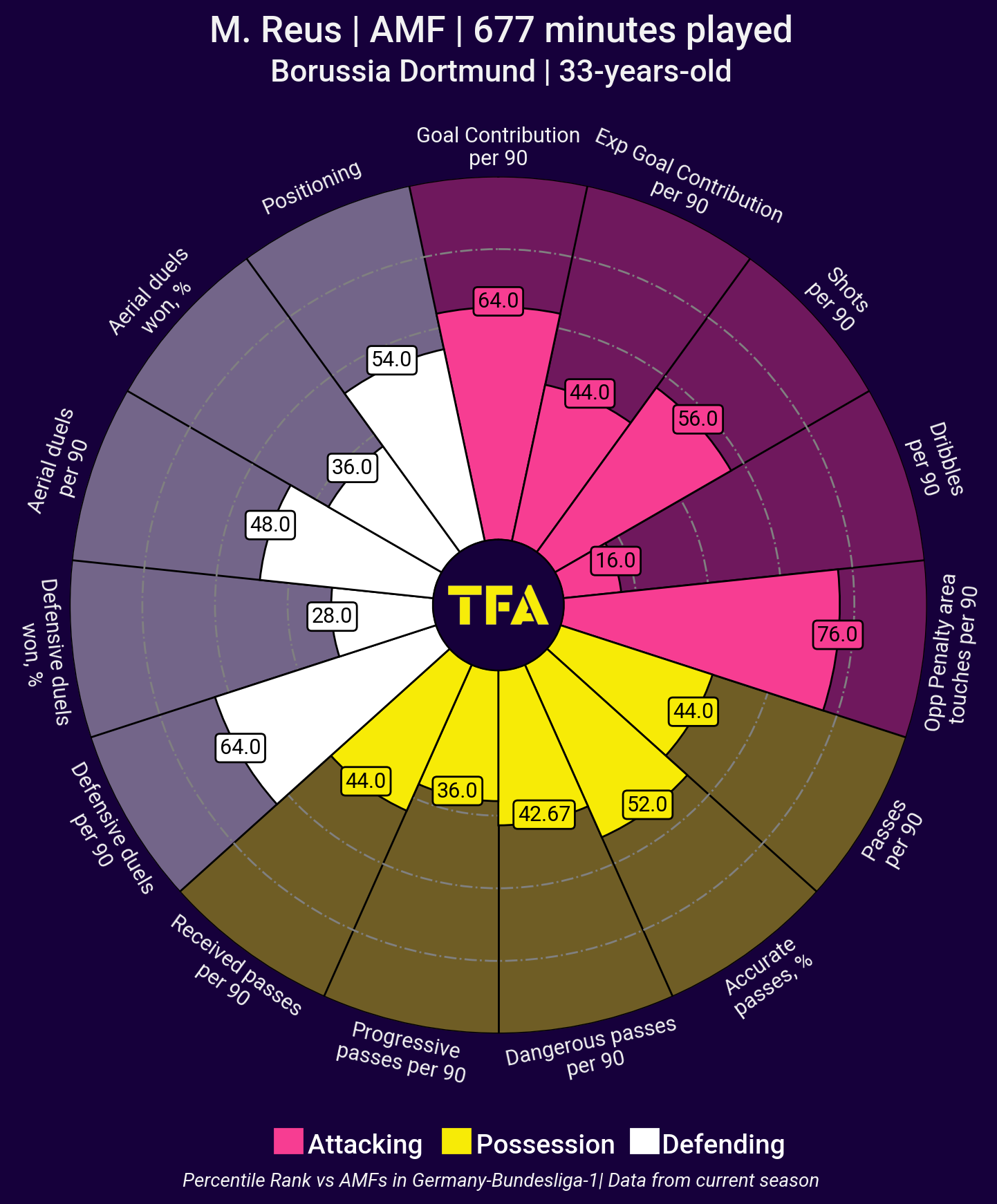 Marco Reus has only played nine matches this season, starting seven and coming off the bench in two. He has two goals and two assists in the Bundesliga, along with a goal and an assist in the Champions League.

The above visual shows the percentile rank of Marco Reus compared to other attacking midfielders in the Bundesliga. As the pizza chart suggests, he has decent attacking and passing stats. Reus gets into the opposition penalty area very often and is ranked in the top 76 percentile for the same. Another area where he does well is in defensive duels and positioning himself on the pitch. 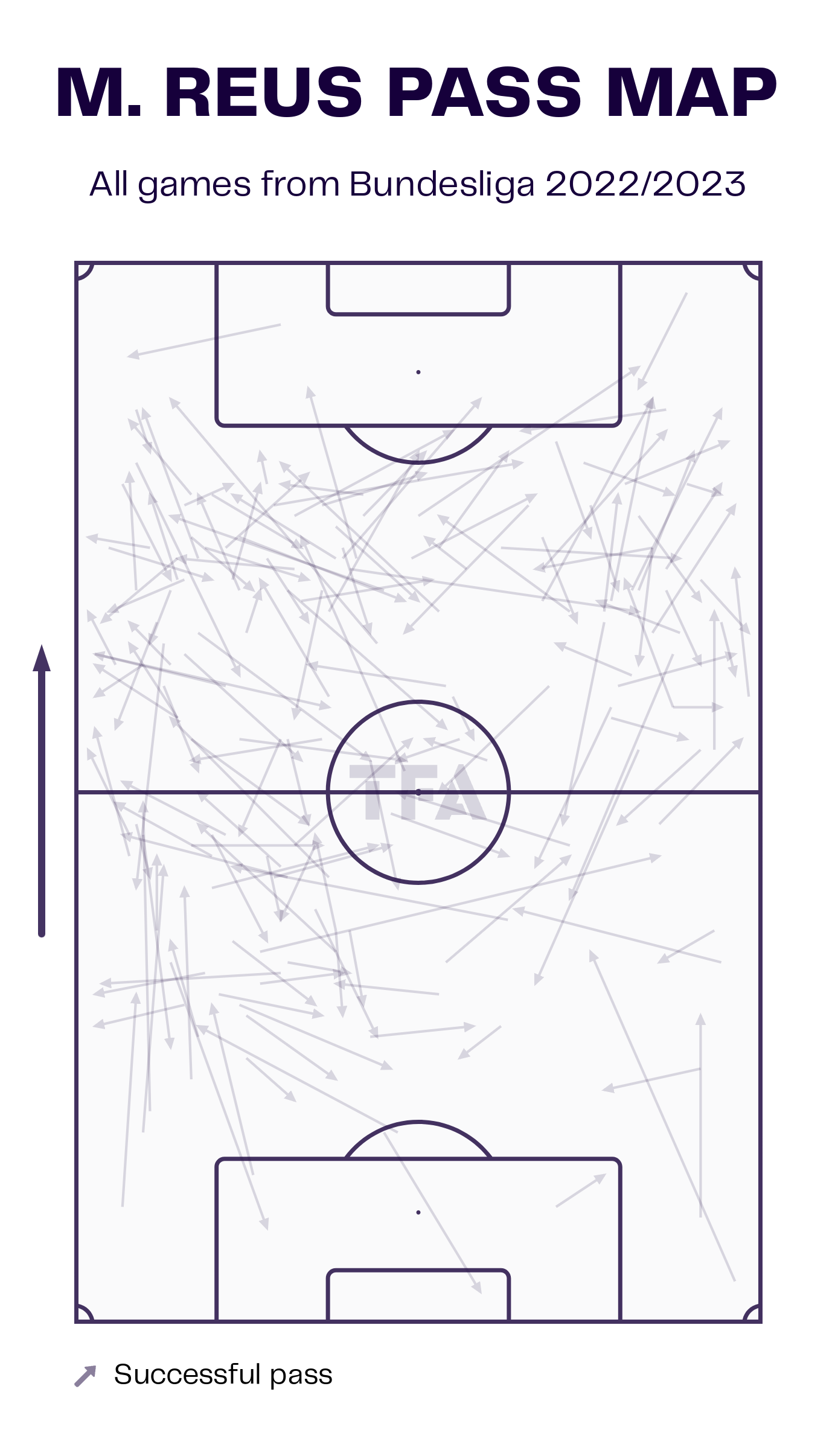 One of the things that Reus is good at is picking the right pass. He has the ability and the vision to find the right player and pick out the right pass. He has had a pretty uneven season, with injuries constantly nagging him. But even so, he has maintained a passing accuracy of 79.3%. He has played an average of 28.85 passes per game this season and has been able to make a difference. This season, his passing stats have come down a bit from last year. Last season, he had a passing accuracy of 84.4% and played 4.07 passes into the final third per game with 77.5% accuracy. Whereas this year, it has come down to 1.86 passes into the final third with 71.4% accuracy. 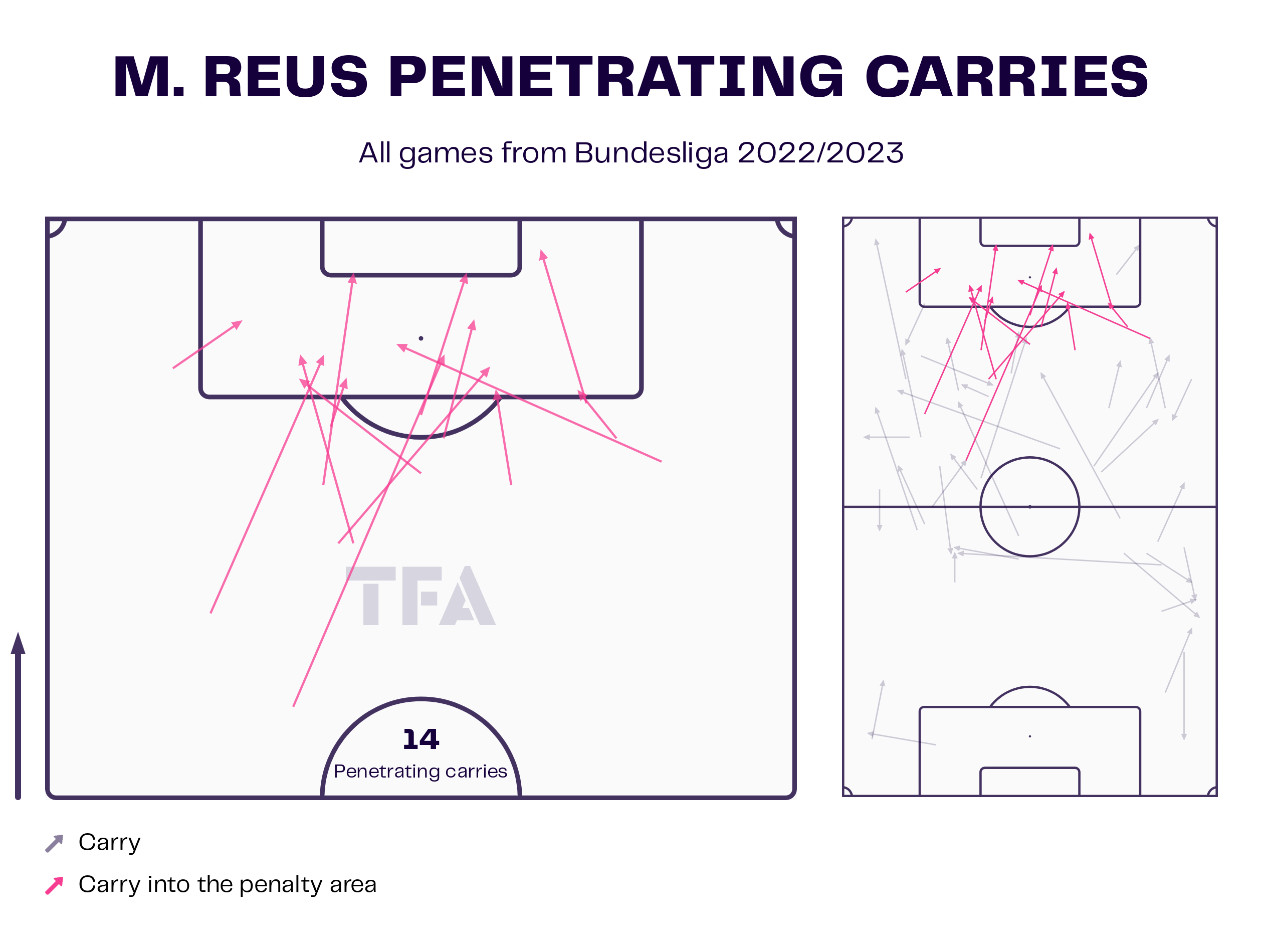 Another way in which Reus can make a difference is through his dribbling. Even at 33, he can make explosive runs through the midfield and into the final third. He has made an average of 1.6 dribbles per game with a 50% success rate. This figure, however, has fallen from 2.91 dribbles per game last season with 38.4% success. His knee injury has not just kept Reus out of the competition but also affected his overall performance this season. Apart from these dribbles, he also makes around 1.2 progressive runs per 90 minutes. 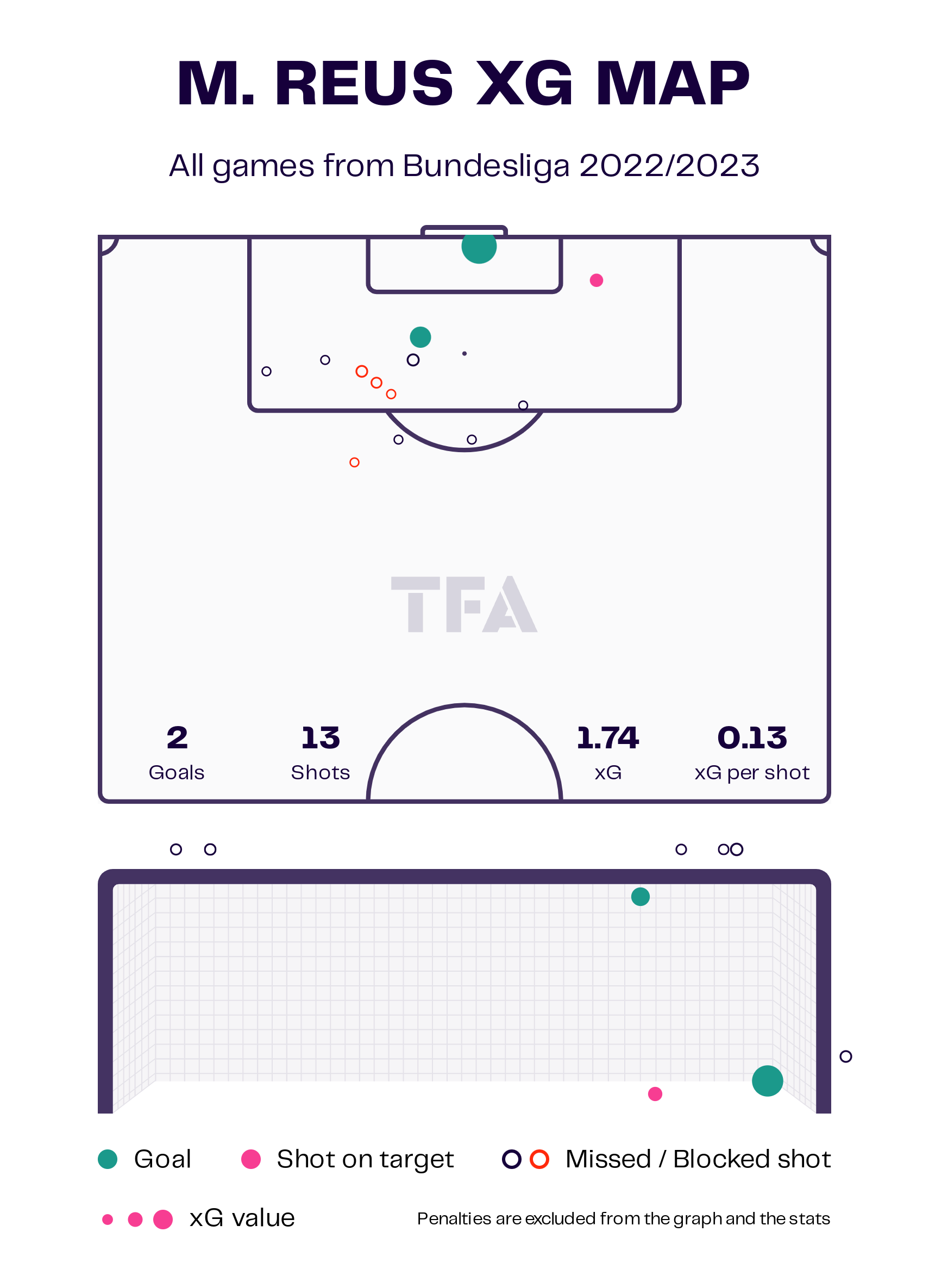 Marco Reus has been a prolific goal scorer for Dortmund over the years and has 146 goals to his name for the black-and-yellow. He scored twice this season in the Bundesliga and once in the Champions League. Reus has attempted a total of 13 shots, making three on target and ten from inside the box. He averages 1.73 shots per game this season, scoring an average of 0.27 goals per game. If Dortmund is to win the league, they will need a lot more goals from their captain. 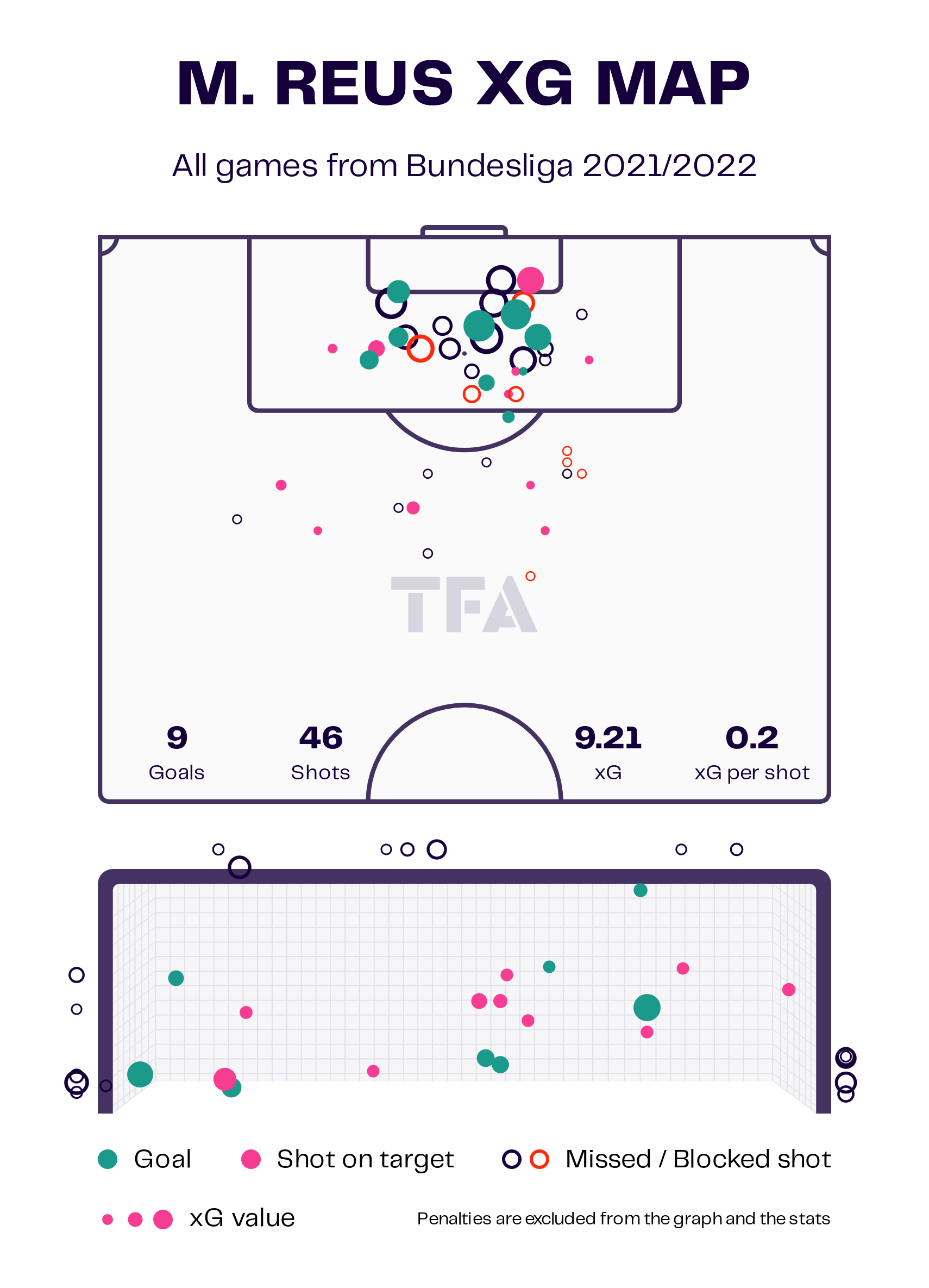 Last season, Reus scored nine goals in the Bundesliga and three in the UEFA Champions League. Out of the 46 shots he attempted, 18 were on target and 30 were from inside the penalty box. Moreover, he tried an average of 1.56 shots per game, with 43.5% of them on target. This figure has seen an improvement as he has attempted an average of 1.73 shots per game this season. 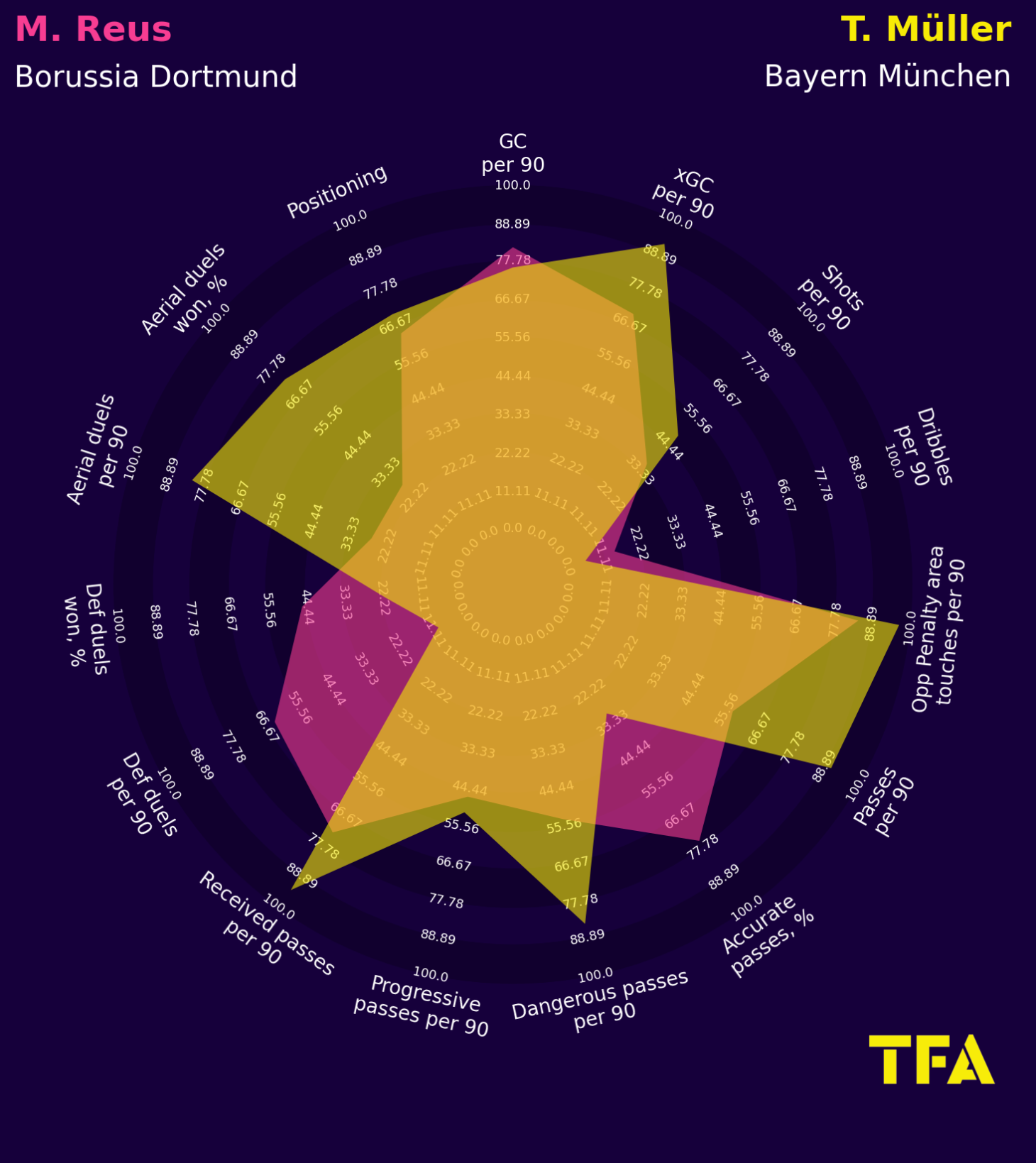 The above visual compares the radars of Marco Reus and his fellow German teammate Thomas Muller. Both play in similar roles and have been very important for their respective teams. Overall, Muller takes a slight edge in the comparison as he has better stats in passes, aerial duels, shots, and expected goal contributions. Reus, on the other hand, does better in defensive duels, dribbles, goal contributions per 90, and accurate passes. Both are two of the best players Germany has produced in recent years and are still going strong for their clubs.

Marco Reus’ story has been both inspiring and painful in many ways. He is one of the unluckiest players to miss out on three successive World Cups due to injuries. But he always bounces back after an injury and shows his mettle. Dortmund coach Edin Terzic will be banking on Reus to lead the team into title contention following his return from injury.

Statistical Analysis: Paraguay on top against Chile in the Copa America...