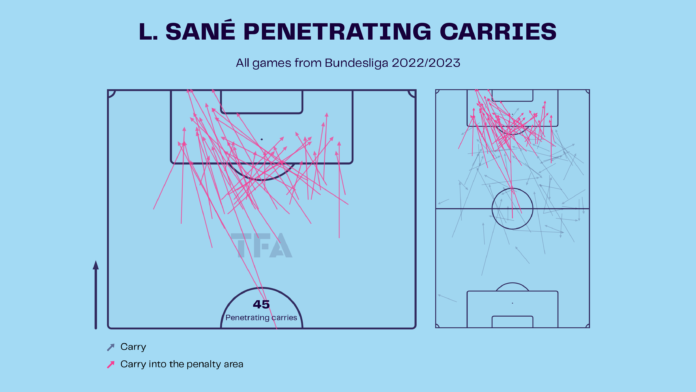 Bayern Munich signed dashing youngster Leroy Sane from Manchester City in the summer of 2020. Ever since the move to Munich, he has become one of their best players. Sane is now an important part of the Bayern side and is the biggest threat going forward. He has scored five goals in the Bundesliga and four in the Champions League this season. Sane’s pace and his dribbling skills, combined with his ability to link with other players, make him an extremely dangerous footballer. He can change the complexion of a match within a matter of seconds and has played a huge role in Bayern’s recent success.

We look at some stats to understand how Leroy Sane is approaching the peak of his career and is becoming one of the best players in the world.

Leroy Sane has played 13 matches this season, starting eight and coming off the bench in five. He has ten goals and six assists to his name across all competitions and is in stellar form. The sheer impact he can create was visible in Germany’s match against Spain in the World Cup. The 2017/18 season with Manchester City was arguably Leroy Sane’s best season, with ten goals and 15 assists to his name. However, given the form he is in, it wouldn’t be surprising if he goes on to break that record. 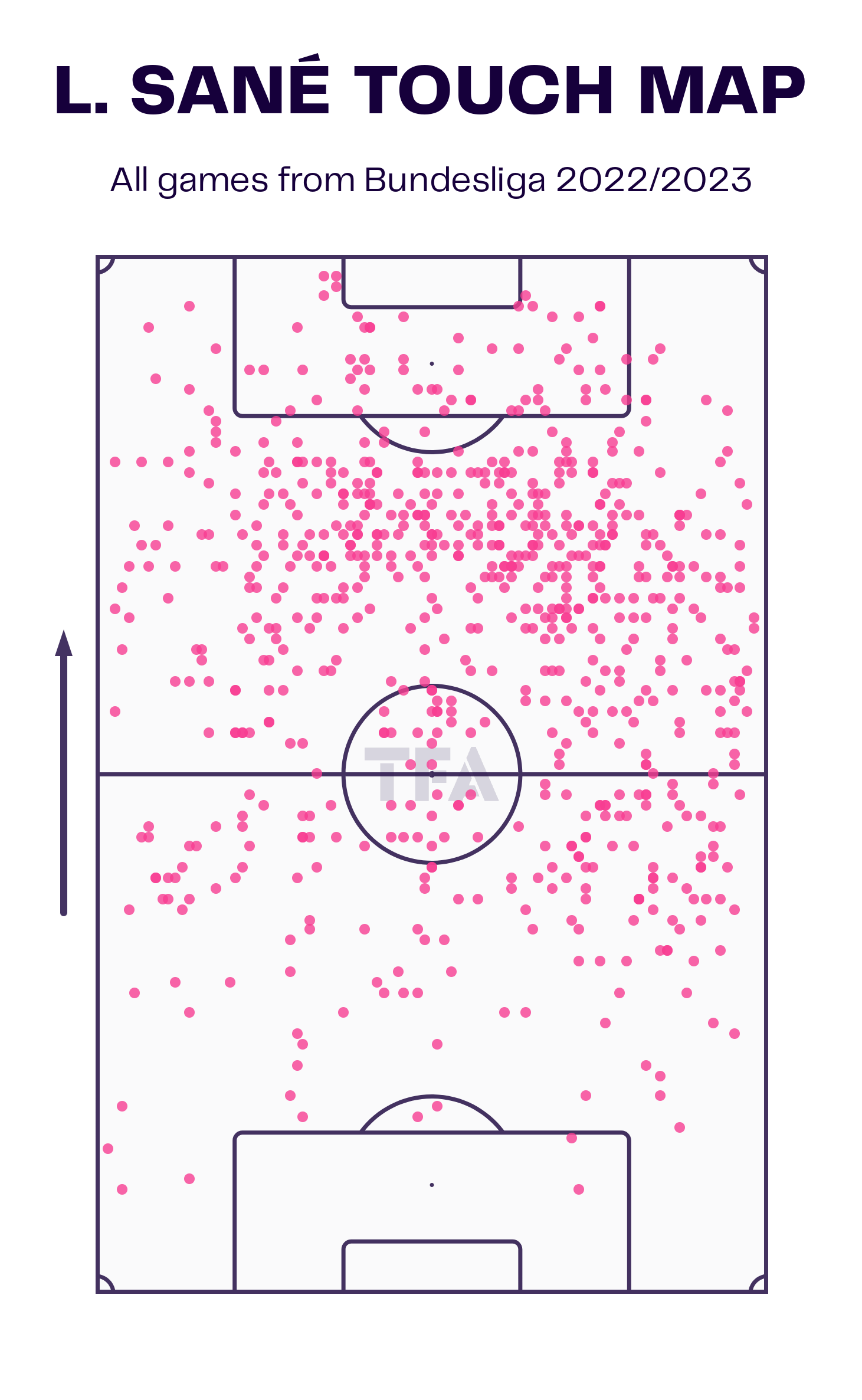 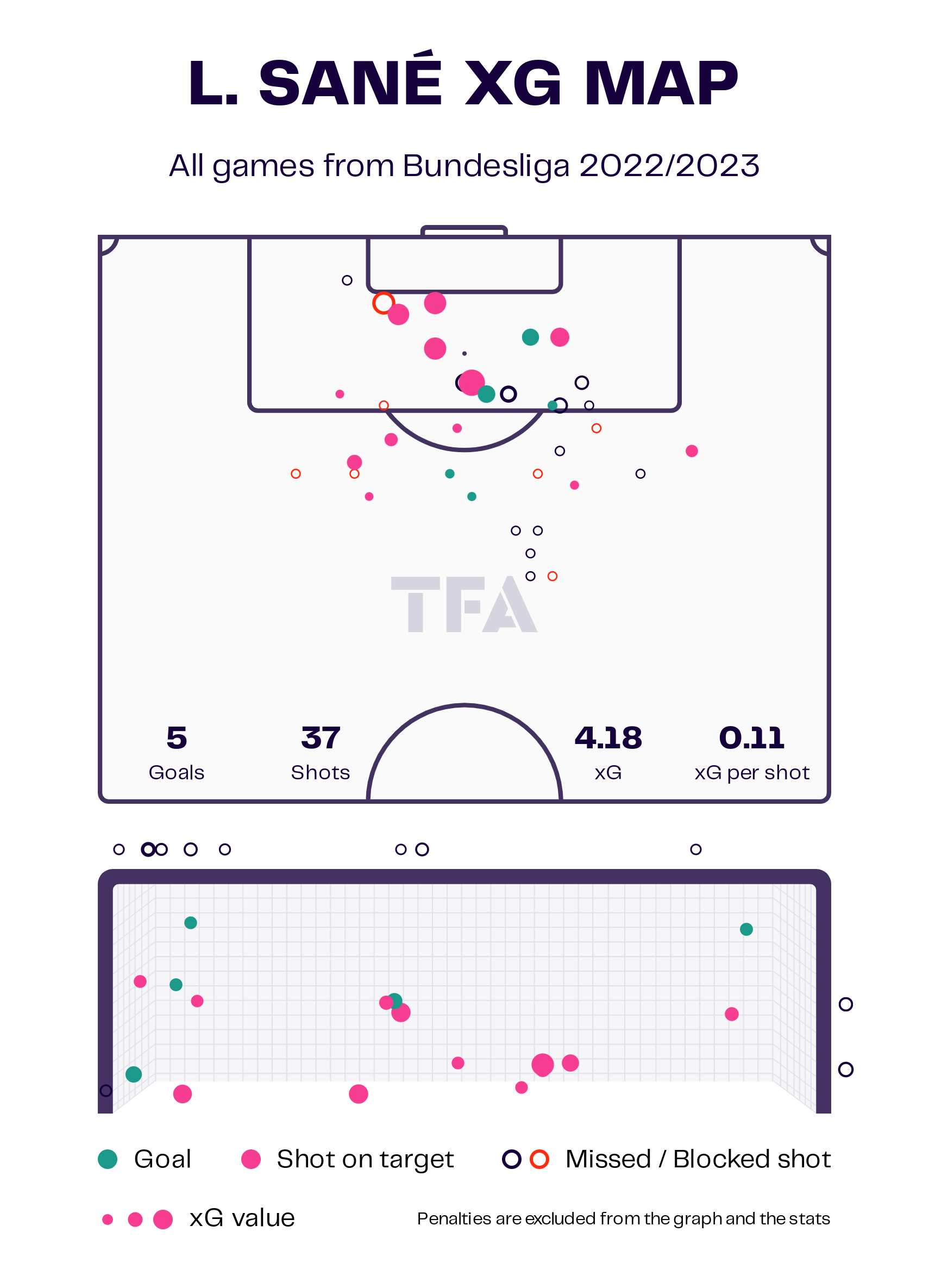 The first viz shows the touch map of Leroy Sane in the Bundesliga this season. We can observe from the touch map that Sane likes to stretch the play and use the width of the field. Leroy Sane has incredible dribbling skills and combines with his teammates to quickly interchange passes and create a threat. He gets into the penalty box very often and averages 3.84 touches in the penalty box. This has, however, come down from 5.25 touches in the penalty box in the 2017/18 season. But Sane’s form has been at its peak this year, as he already has more than half the number of goals from last year.

The second viz shows the xG map of Leroy Sane in the Bundesliga this year. He has scored five goals in the league and four in the Champions League. Moreover, Sane has three assists to his name as well. The 26-year-old has tried 37 shots this season, with 16 of them coming from inside the penalty box. In addition, 16 of these shots were on target. Sane usually plays as a right-attacking midfielder. As a result, he cuts inside to become more central and attempts shots at goal. He tries an average of 3.12 shots per game with an accuracy of 46.2%. This is an upgrade from 2.03 shots per game in the 2017/18 season with Manchester City. 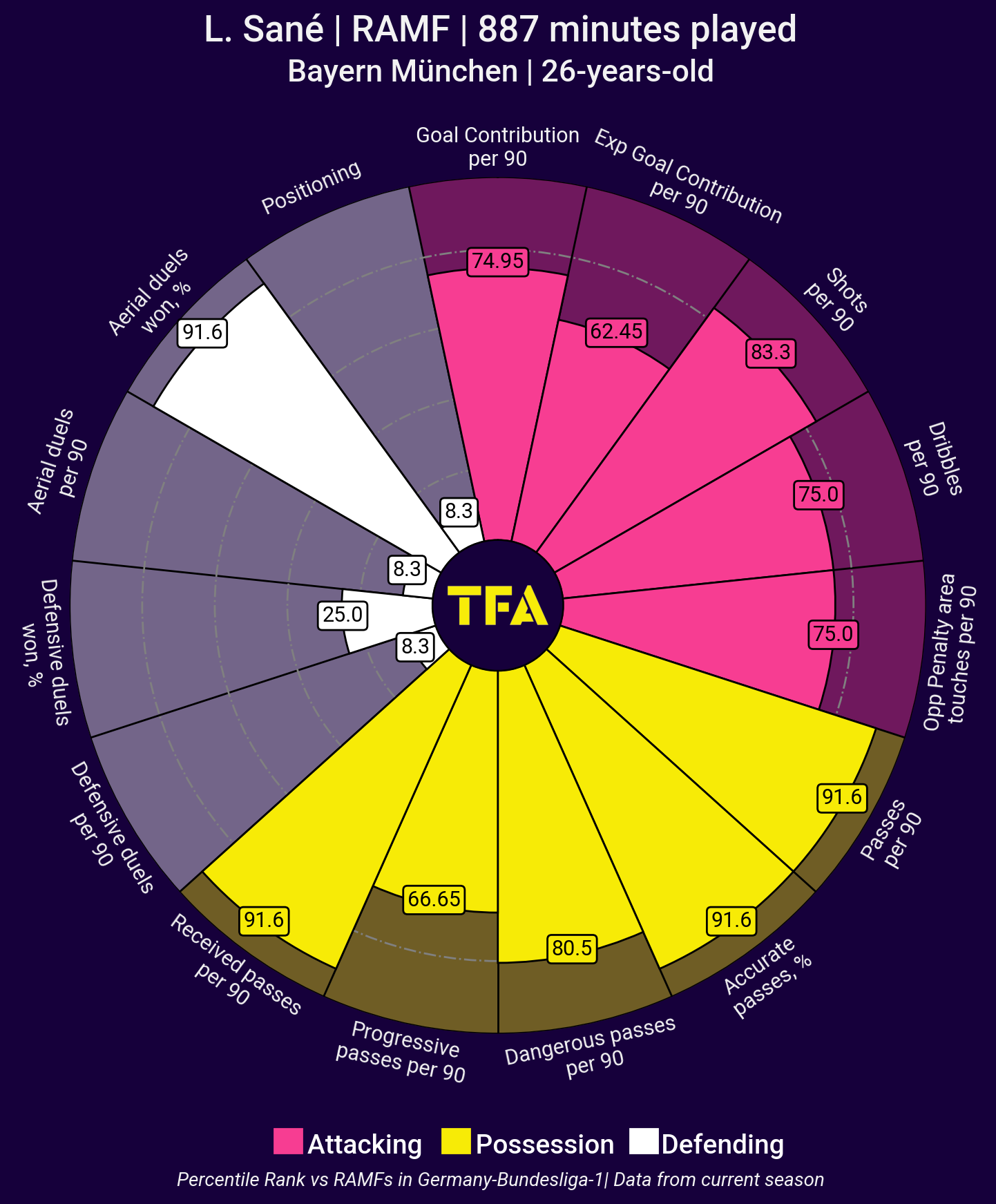 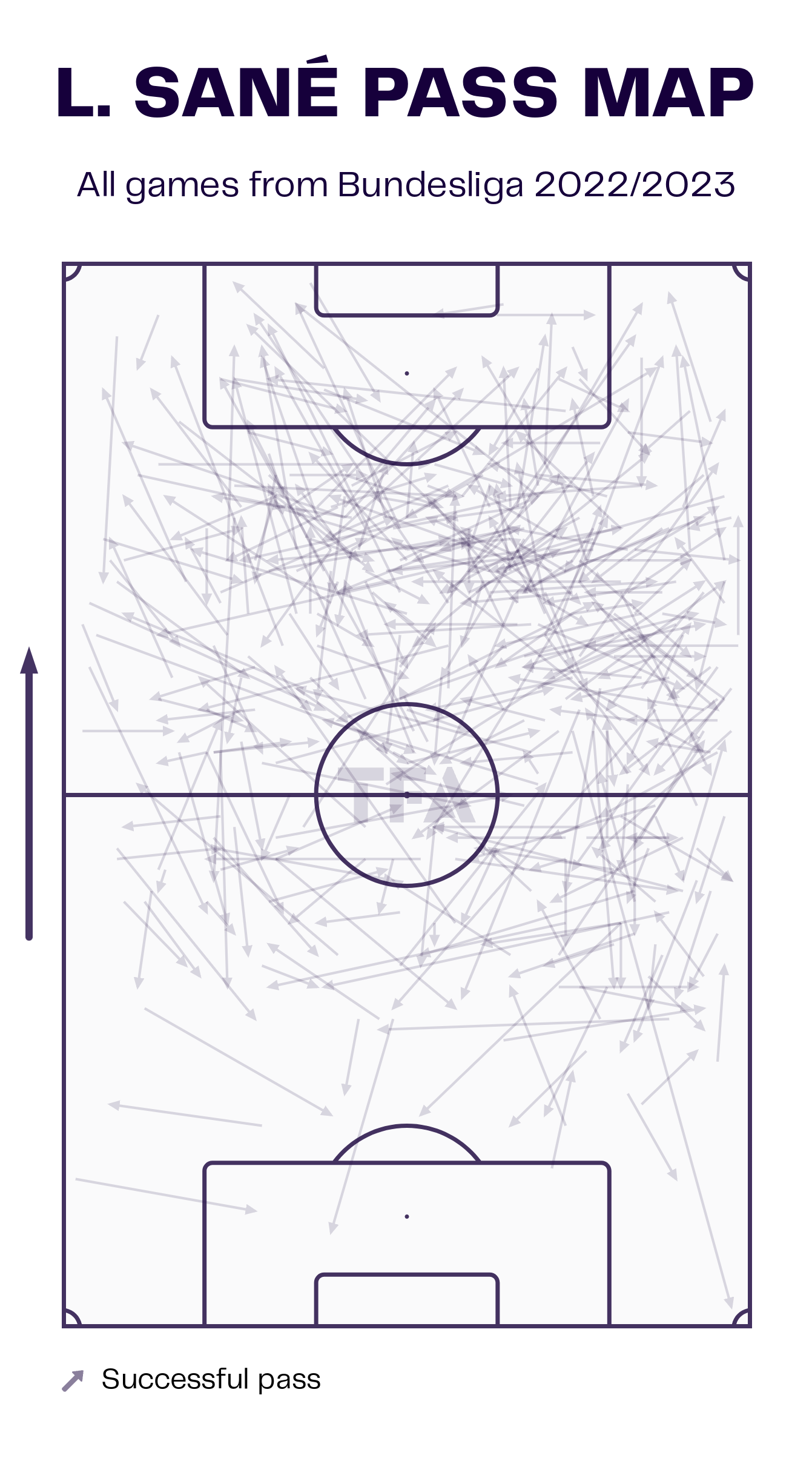 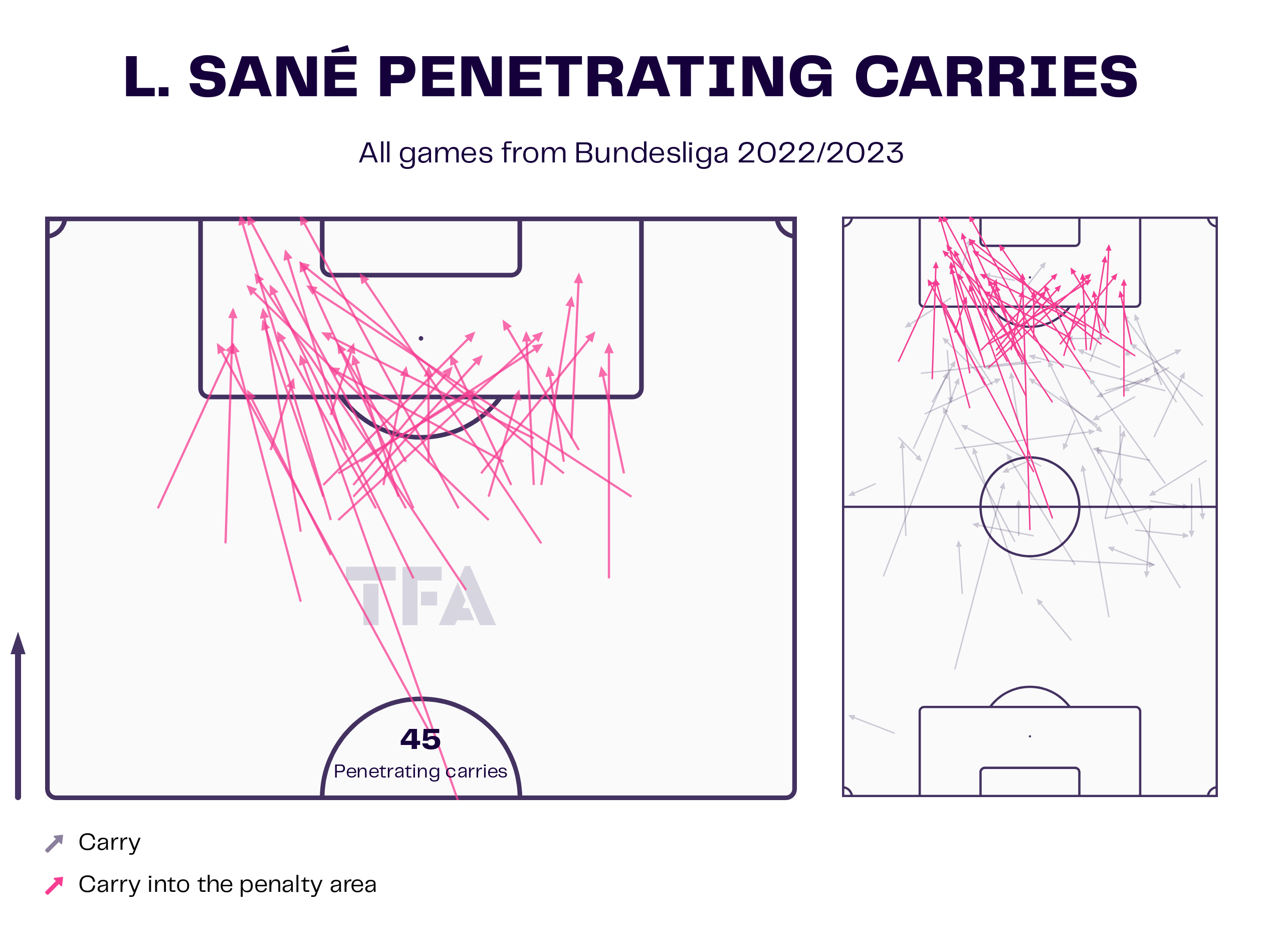 The above viz shows the penetrating carries of Leroy Sane this season. He has made 45 penetrating carries and is an important exponent of the direct football Nagelsmann wants to play. What makes him different from other players is that even after being one of the fastest players, he always looks to combine with his teammates. He averages around 4.44 dribbles per game and also makes around 2.58 progressive runs as well. However, he averaged around seven dribbles per game with a 50% success rate in the 2017/18 season. Nevertheless, the efficiency has not decreased, as Sane has been in incredible form this season. 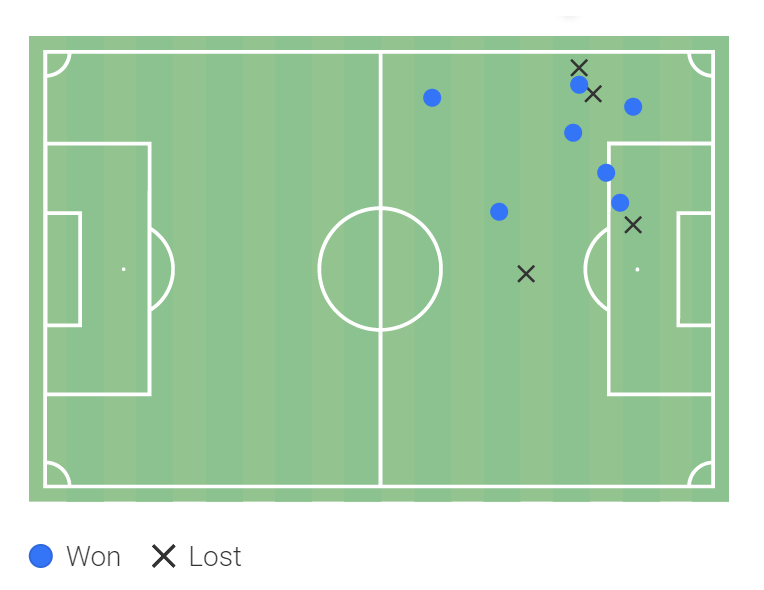 The above viz shows the dribbles of Leroy Sane against Chelsea in the 17/18 season. He attempted 11 dribbles and completed seven of them with a 64% success rate. He averaged seven dribbles per game that season and made a real difference for Manchester City. Sane played on the left flank that game and his ability to take on players helped City beat Chelsea 1-0.

Leroy Sane has turned out to be Bayern’s and Germany’s most important player, with the ability to change matches alone. His ability to impact matches is incredible and has helped Bayern take a four-point lead in the table. All the statistics and the videos point towards one thing: if Sane keeps up this performance for the rest of the season, he might go on to set a new personal record.