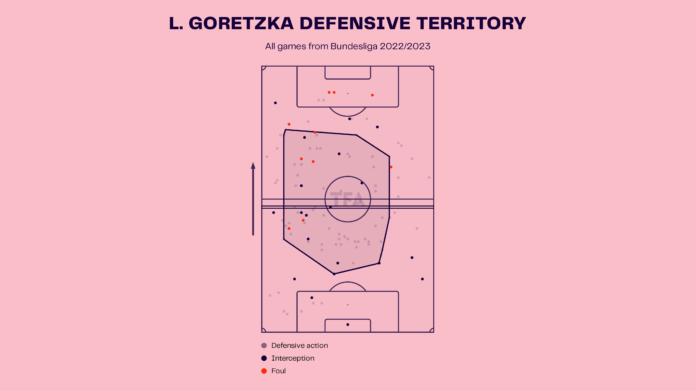 Bayern Munich signed Leon Goretzka from Schalke in the summer of 2018. The German International has proved to be one of the best investments the Bavarians have made recently. Gortezka is a hulking figure in the centre of the field and asserts his dominance in both attack and defence. His ability to defend, stop counter-attacks, find the right passes, and score goals make him the perfect foil for a modern-day midfielder. He has been an incredible presence in the midfield for the defending champions and has cemented his place in Julian Nagelsmann’s team.

We take a look at some stats to understand why Leon Goretzka has the perfect midfield profile.

Leon Goretzka has played 11 matches this season in the Bundesliga, starting nine and coming off the bench in the other two. He has scored three times in the Bundesliga and twice in the Champions League. He also has four assists to his name across all competitions. 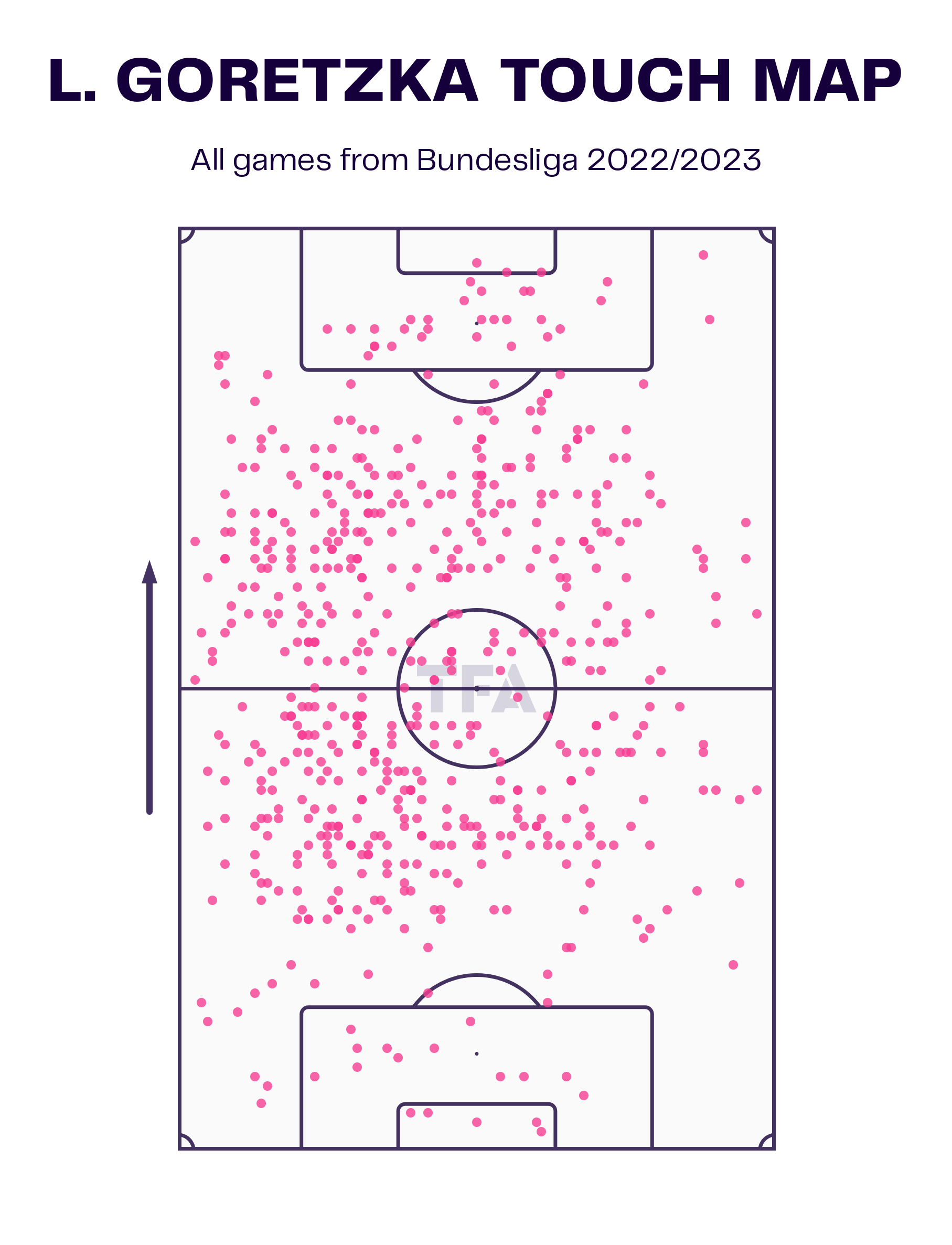 The above viz shows the touch map of Leon Goretzka in the Bundesliga this season. We can observe from the touch map that he is a box-to-box player and makes some good runs into the penalty box as well.

He is a strong presence and has made a difference after coming on as well. The best example of this is his performance against Barcelona in the UEFA Champions League this season when he came on in the second half and made some important recoveries in the middle of the park. He gets forward well and makes around 2.35 touches in the penalty box per game as well. 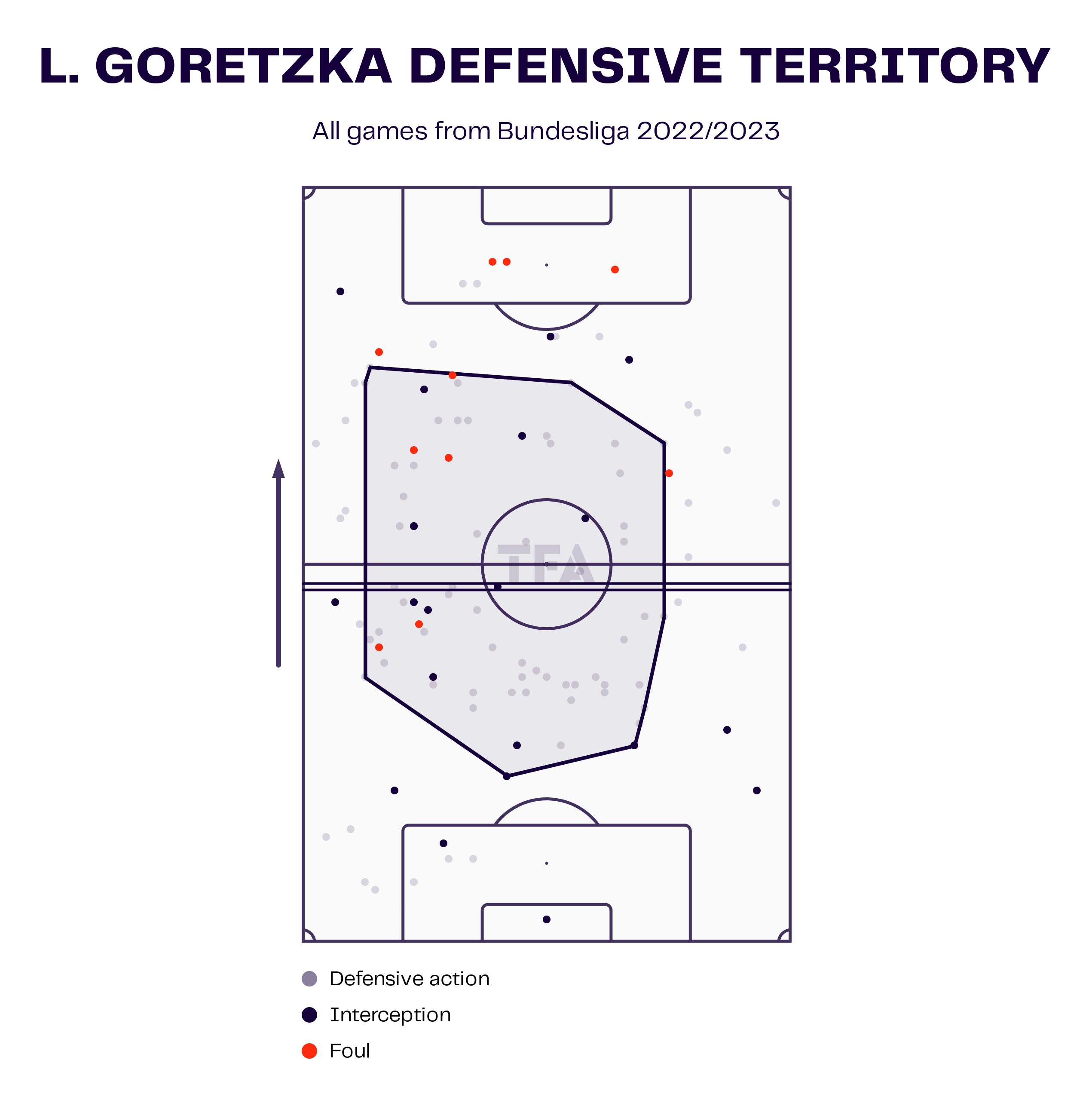 Defending is one of Goretzka’s best attributes. The sheer difference his presence makes in the Bayern midfield is significant. Goretzka bosses the midfield with Joshua Kimmich, with the latter mainly in charge of creativity and the former taking care of the defensive duties. He makes around 5.92 defensive duels per 90 minutes, winning 67.1% of them. He also makes 3.98 interceptions per game and has a success rate of 66.7% in sliding tackles as well. 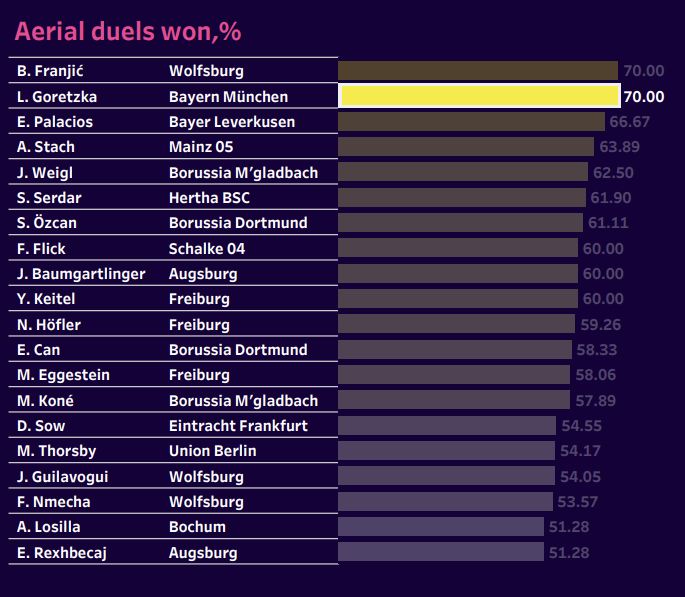 The above viz shows the aerial duels by different midfielders in the Bundesliga. Leon Goretzka has the second-best record in the league and has 70% success as well. He makes around 2.52 aerial duels per 90 minutes with 70% success. His aerial dominance aids Bayern in winning high balls. 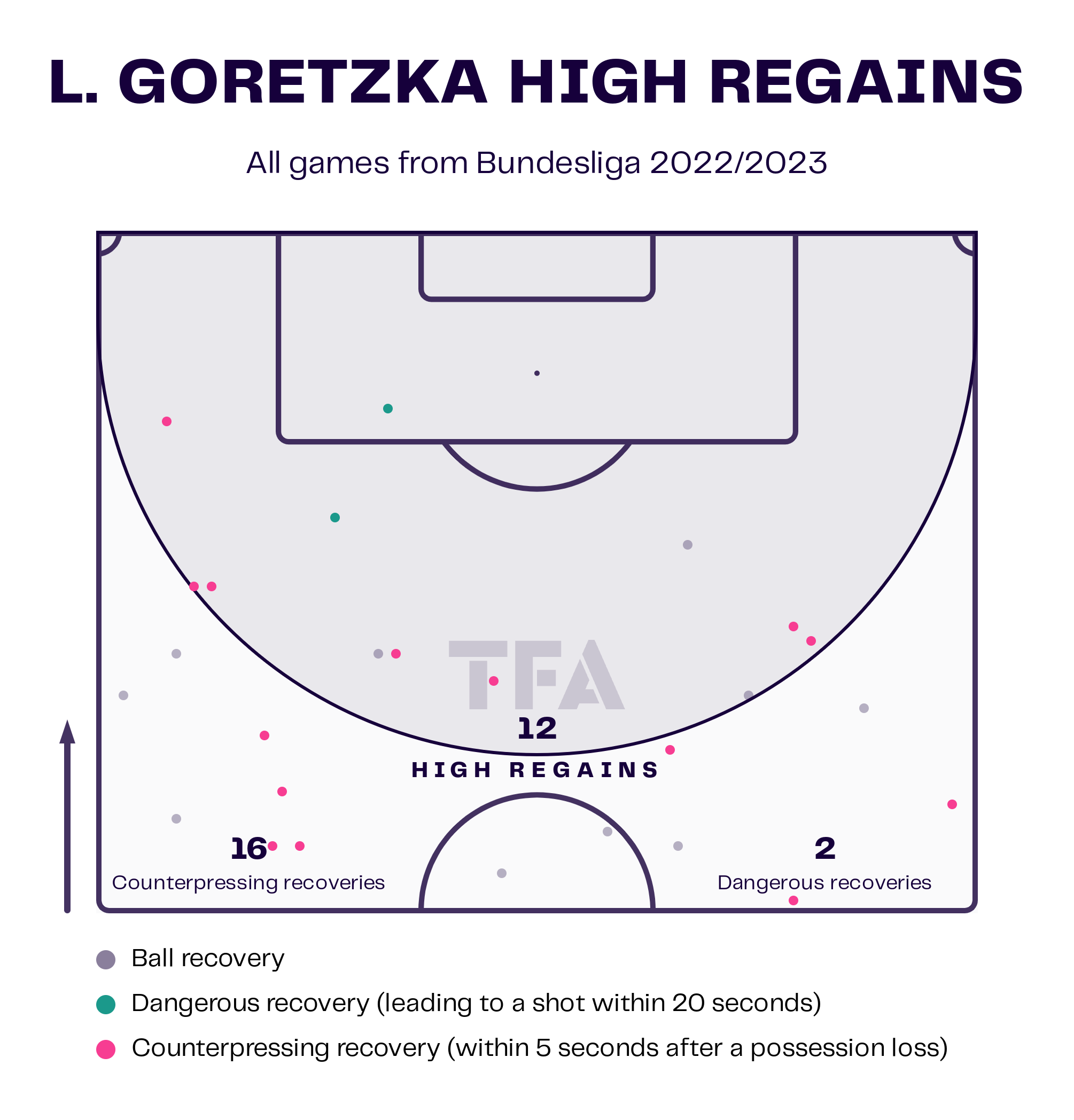 The above viz shows the high regain made by Leon Goretzka. Bayern is a team that presses high, and his high regain helps his teammates find the ball in dangerous positions to launch an attack. There were 16 counter-pressing recoveries and two dangerous recoveries among these high rebounds. He recovers the ball around nine times per game, with 38.4% of them coming in the attacking half. Goretzka also wins around 3.57 loose balls per game as well. 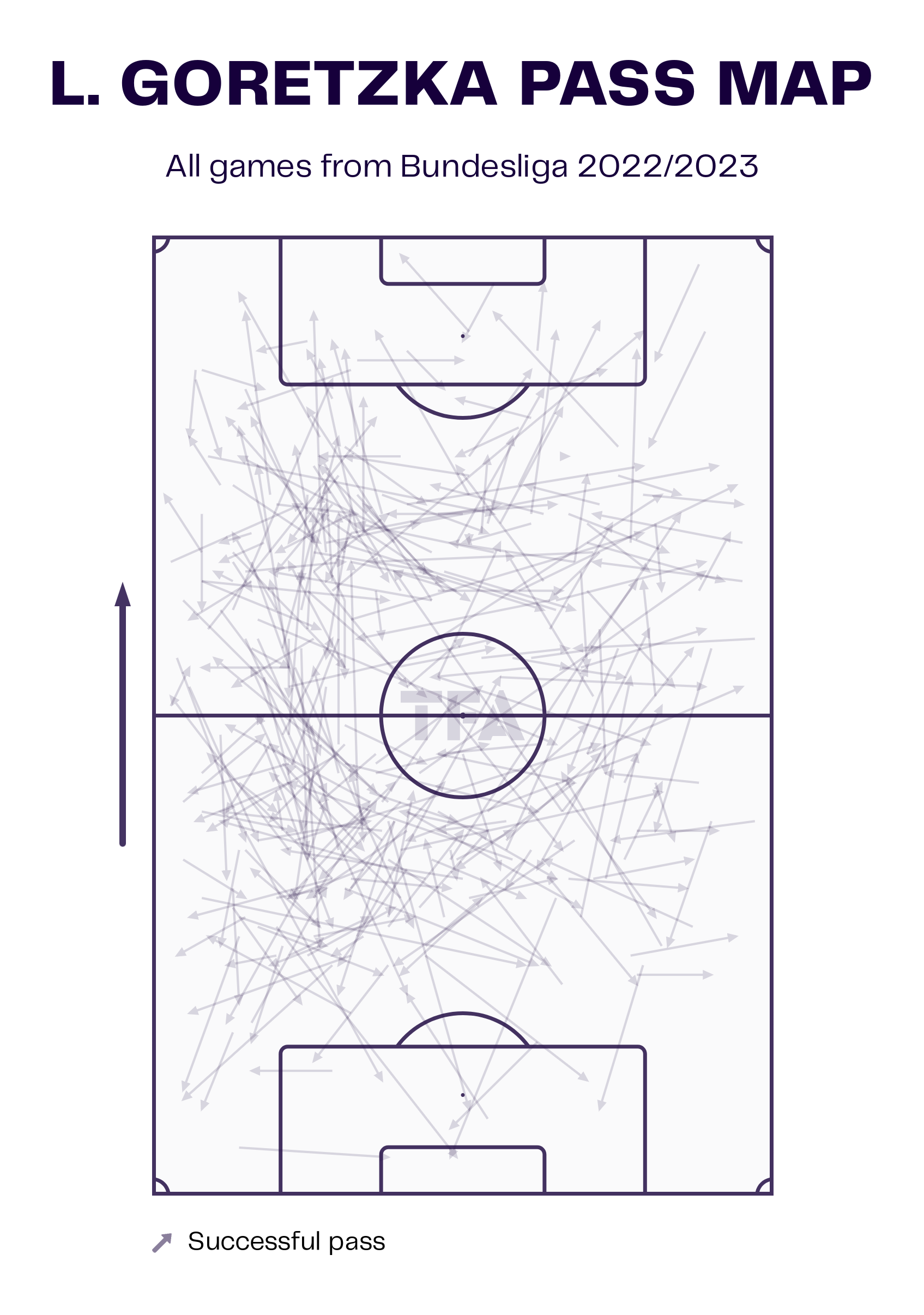 Another one of Goretzka’s important qualities is his passing range. He can play the long passes, and the short passes, and find the right pass as well. He has a passing accuracy of 84.7% and makes around 50 passes per game on average. As he usually stays in the middle of the field, or the attacking third, he also contributes to goals as he makes around seven passes to the final third per game and around 2.52 passes to the penalty box per 90 as well. 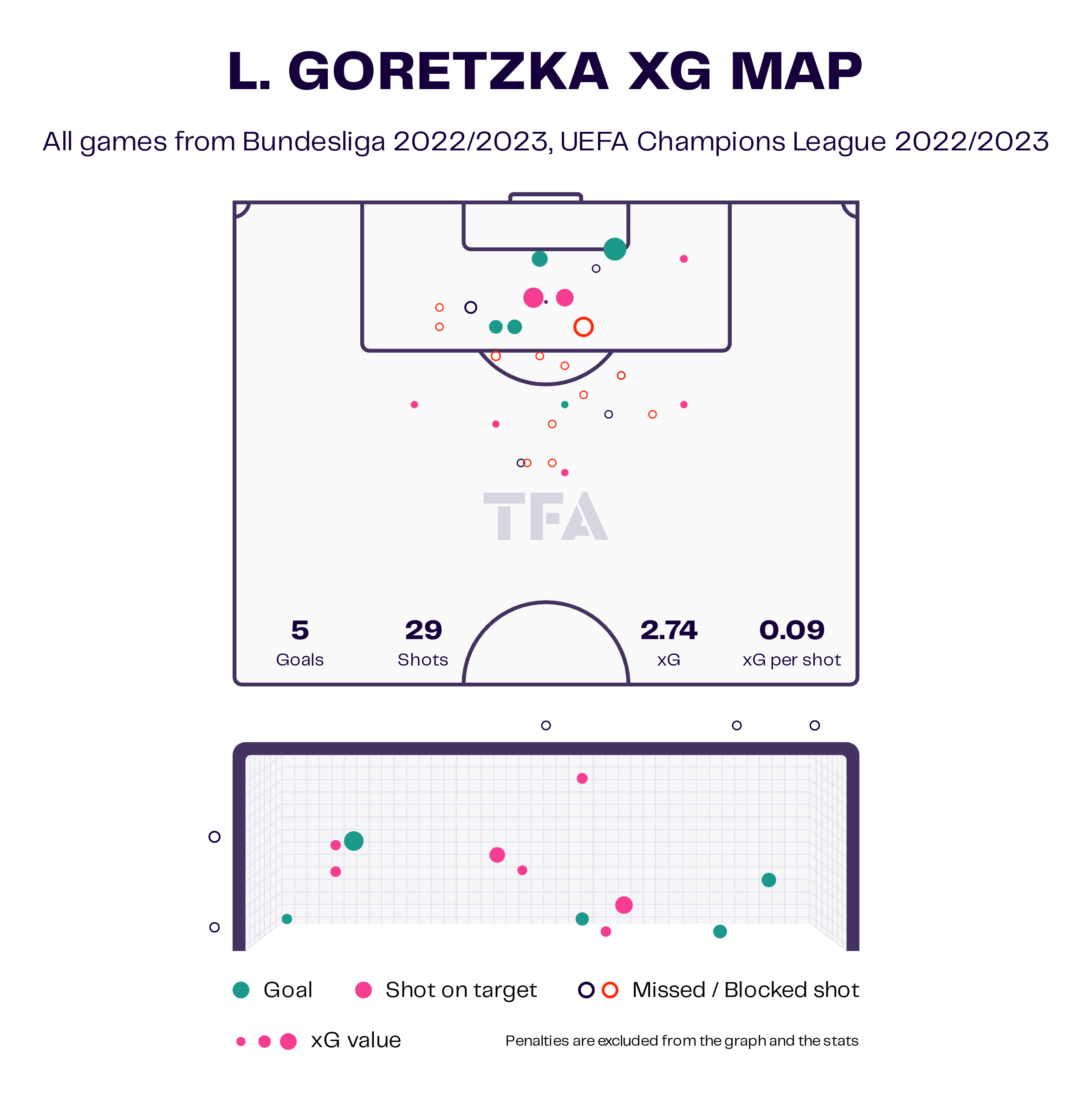 A great quality of Leon Goretzka that makes him an excellent midfielder is that he is not hesitant to shoot. He lingers around the box and unleashes some shots at the goal too. This season, he has taken 29 shots, 12 of which were from inside the penalty box and 12 of which were on target. His central positioning and runs into the box provide some good chances for him to score, and he has an xG of 2.74 as well.

Leon Goretzka has been in good form this season and has managed to win Julian Nagelsmann’s trust to place him in his team. He has everything that a manager asks of a player. He is strong, passes the ball well, defends well, and scores goals too. The impact he has on the match is visible every time he steps onto the field, and he has added strength to Bayern’s midfield.

Under the microscope: Why Randal Kolo Muani is the perfect man to replace Nkunku for France

How big-name signing can aid Bayern’s cause in the Champions League...