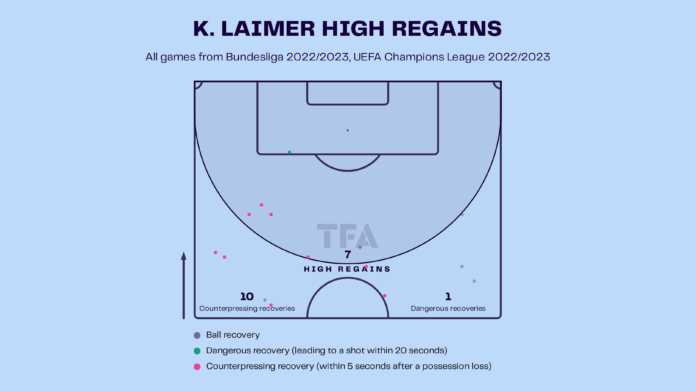 Konrad Laimer joined RB Leipzig in 2017 and has been an important cog in their midfield ever since. The 25-year-old, who is approaching his peak at the moment, is a pressing machine that helps the team win back possession in crucial areas. His ability to dribble, press, find the right pass, and score the occasional goal makes him an ideal candidate for any midfield role. Laimer was out with an injury this year and has only played four matches in the Bundesliga. But as soon as he is fit, it won’t be surprising if the big fishes of Europe want to rope him in. We look at some stats to understand what makes Konrad Laimer a special player and why he is attracting the attention of big clubs. 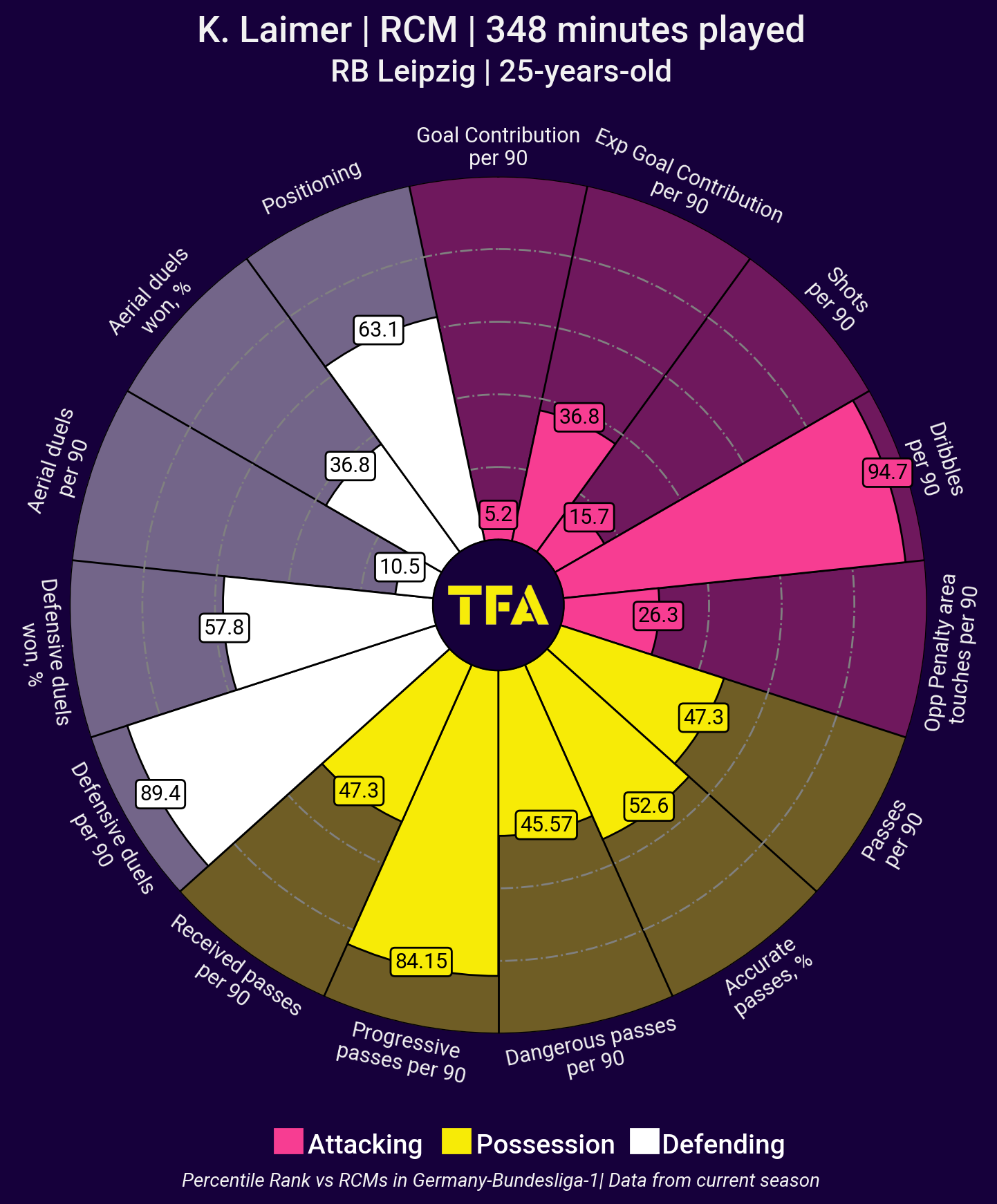 Konrad Laimer was out with an injury for the majority of this season and has only played four matches. The above visual shows the percentile rank of Konrad Laimer compared to other right-central midfielders in the Bundesliga. As the pizza chart suggests, he is ranked in the top 94.7 percentile for dribbles per 90 and the top 84.15 percentile for progressive passes per game as well. He has good defensive stats and is ranked in the top 89.4 percentile for defensive duels per 90 minutes and the top 63.1 percentile for positioning too. Since he has only played four matches this season, the sample size is very small and therefore not enough to judge him as a player. 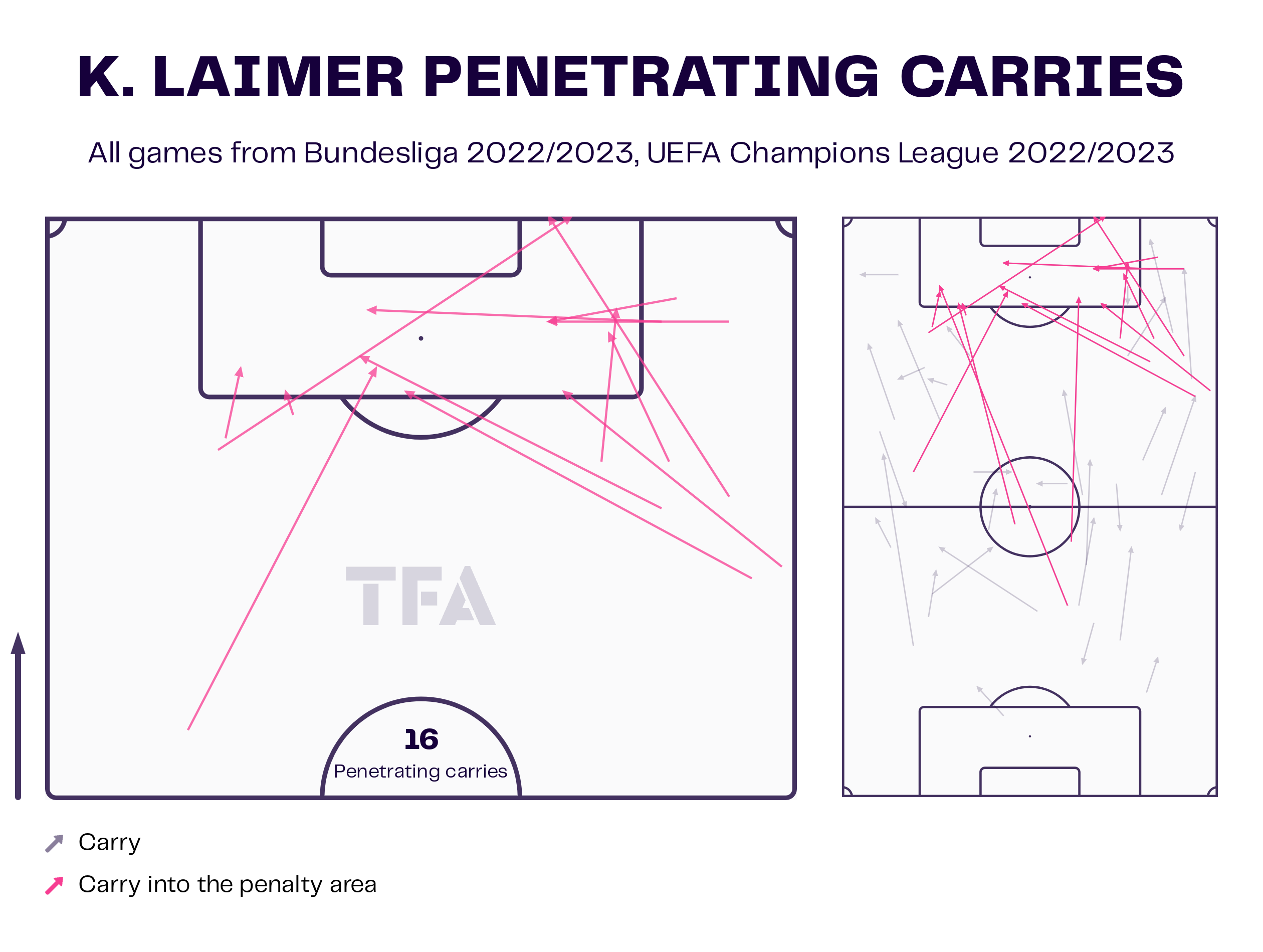 Undoubtedly, dribbling is one of Laimer’s best qualities. He is fast and can make those line-breaking dribbles, which have helped Leipzig so much. His pace and his control over the ball make it hard for the opponent to dispossess him. In the four matches that he has played this season, he has averaged 2.74 dribbles per game with a 33% success rate. Konrad Laimer collects the ball from a deep position in the midfield and drives forward with pace. He makes it look so easy and is so efficient in cutting through the defensive lines of the opposition. The 25-year-old also makes around 1.56 progressive runs per game. 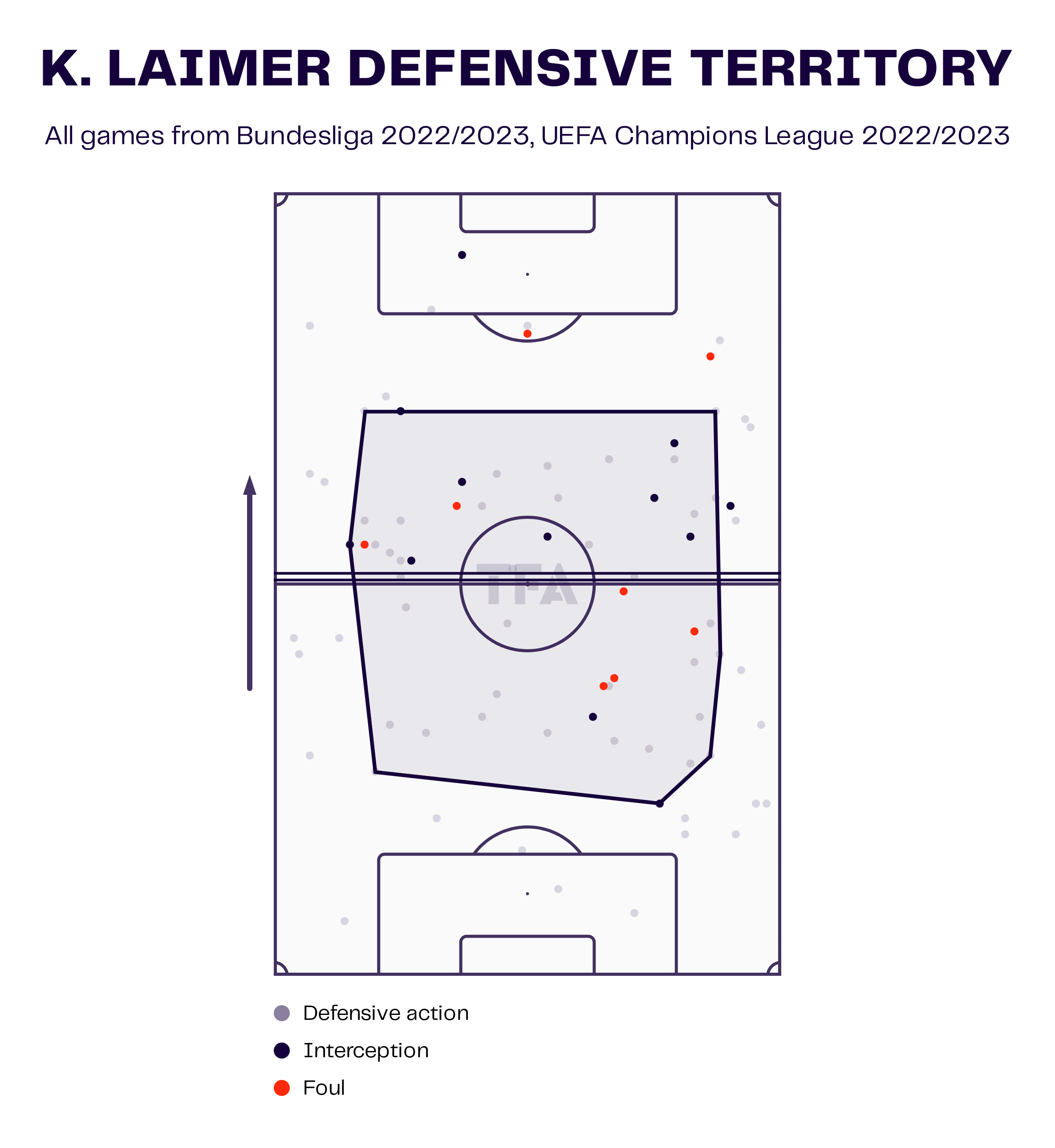 Konrad Laimer plays as a right-central midfielder for Leipzig and usually stays in the middle of the pitch. While his offensive qualities like dribbling are impressive, he also helps the team with his defensive skills. He makes around three interceptions per game. These interceptions usually happen in the middle of the pitch or the attacking third, both of which help Laimer unleash an attack either by passing or through a line-breaking run. He also makes around 8.73 defensive duels per game and wins 61.2% of them. Laimer might not be the best presence aerially, as he makes 1.36 aerial duels per game on average and wins only 36% of them. 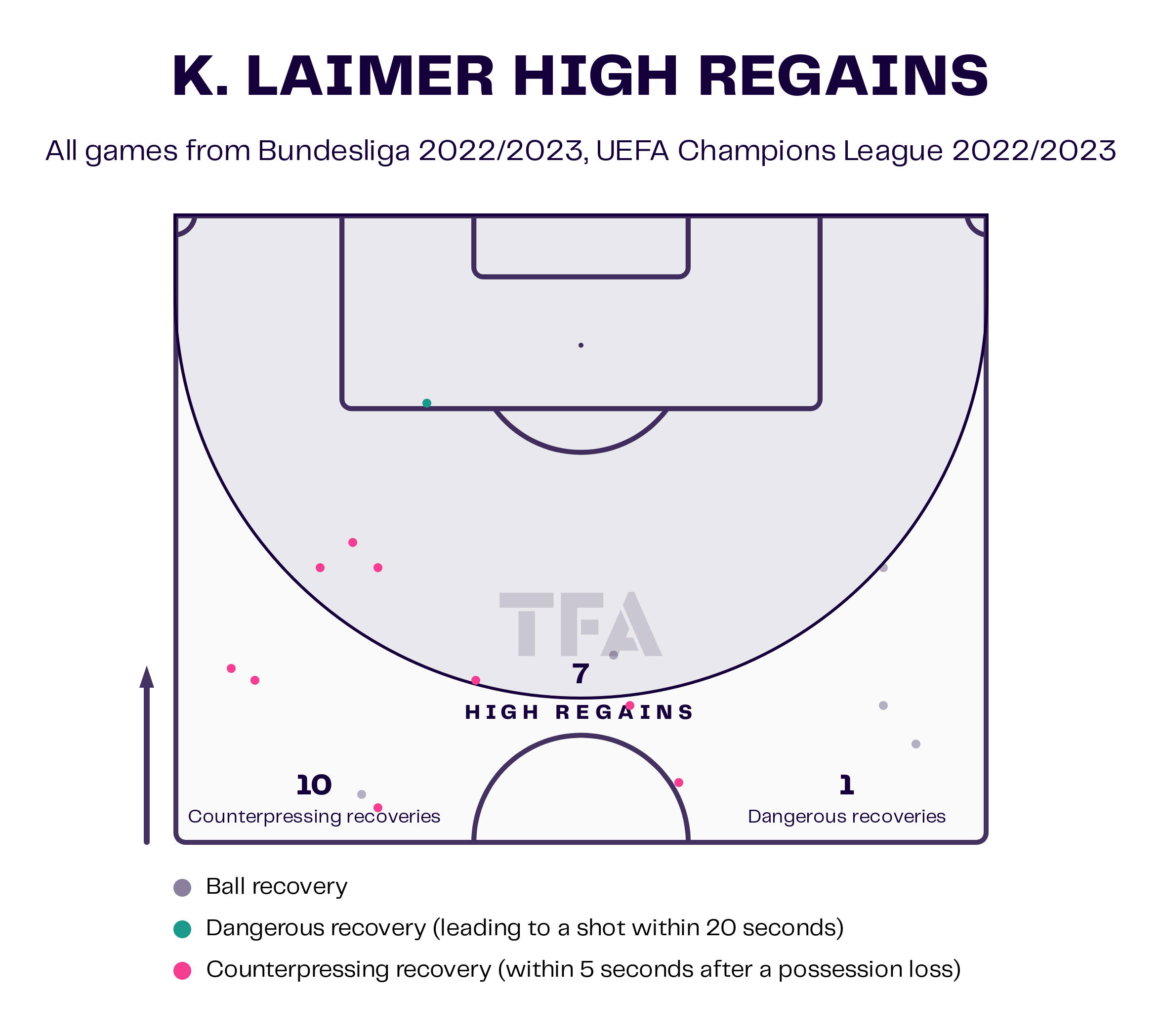 Konrad Laimer defines pressing in his way. When it comes to pressing, he is one of the best players in the league, not just in his team. Laimer leads the pressing from the midfield and rarely lets anyone go past him. He wins the ball a lot and has made around 7.55 recoveries per game this season, with 50% of them in the attacking half. The above visual shows the high regains made by Konrad Laimer. We can observe from the visual that he wins the ball a lot from counter-pressing. In the four matches that Laimer has played this season, he has made ten counter-pressing recoveries and one dangerous recovery as well. He has also won, on average, around 4.3 loose balls this season. 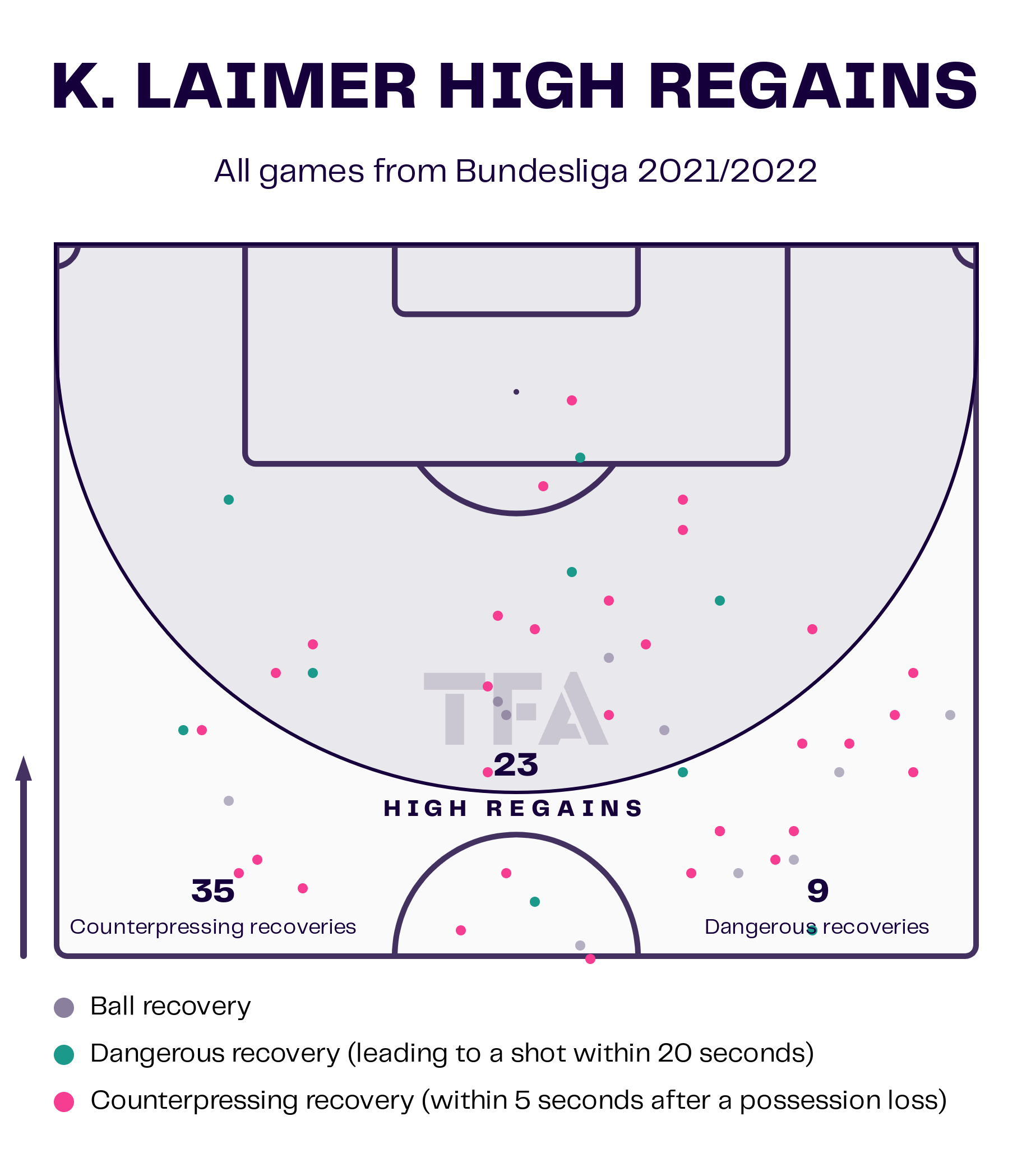 As we mentioned, pressing is one of Laimer’s best qualities. Because Leipzig uses high pressing, his contribution from winning the ball in the attacking half has been critical.The above visual shows the high regains made by Konrad Laimer last season. As we can see from the visual, he wins the ball a lot of times in dangerous positions. He made 35 counter-pressing recoveries and nine dangerous ones last season. Moreover, the 25-year-old made an average of 7.21 recoveries last season, with 46.9% of them in the opposite half. Because this statistic is from a larger sample size, his rebounding stats appear to be slightly better this season. It would be interesting to see if Laimer can keep up his better performance in pressing as he plays more games this season.

Konrad Laimer was ruled out for this year with his ankle injury, but reports suggest that he has started training again. This will be a huge boost for Leipzig, as he plays an important role for them in the midfield. Laimer is on the radar of many big clubs, including Bayern Munich and Liverpool, and they will be looking to see how he performs after he returns from the injury.

Robert Lewandowski has 251 Bundesliga goals: Who has he scored against?