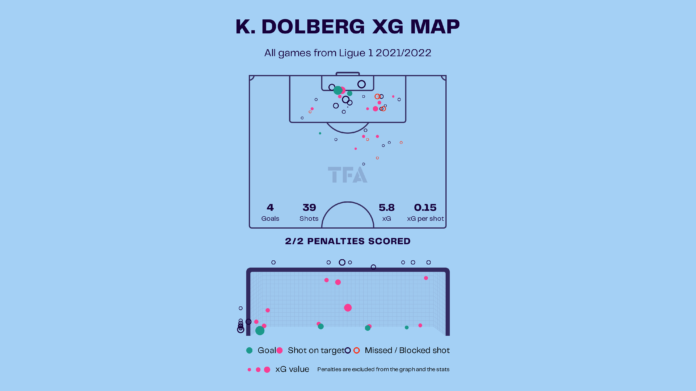 Hoffenheim has signed 25-year-old Kasper Dolberg on loan from French club Nice after he spent the first half of the season with Sevilla in Spain. The Danish striker, who was compared to a certain Dennis Bergkamp during his time at Ajax, was trained by the former Arsenal legend himself and was highly regarded. However, his stint with Sevilla didn’t go according to plan, as he appeared in just four games, without scoring a goal. Hoffenheim currently sits in 11th place in the Bundesliga with 18 points from 15 matches and just five wins under their belt. They have also developed an unwanted streak of being winless in their last five matches. Therefore, we look at some stats to understand whether the new signing Kasper Dolber can revive Hoffenheim’s fate.

Kasper Dolberg joined Sevilla in the summer on loan from Nice. However, things didn’t go as planned, as he had a pale stint with the Andalusians. He played in four matches in La Liga and assisted one goal. 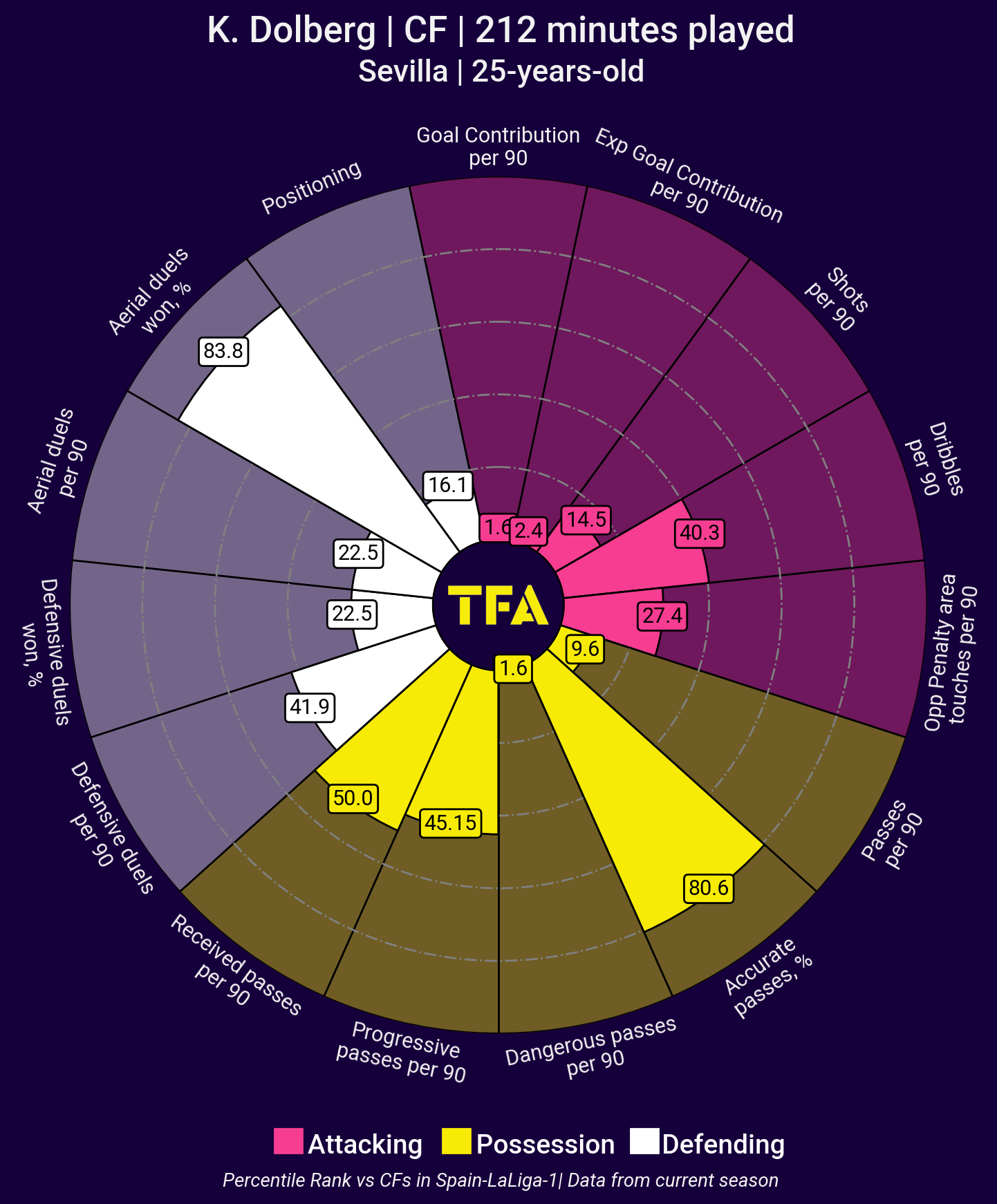 The above visual shows Kasper Dolberg’s percentile rank from this season compared to other centre-forwards in La Liga. He featured in very few games and therefore doesn’t have a large sample size to choose from. Therefore, he has very low stats in attack, mainly due to a lack of time rather than quality. He is ranked highly in passing accuracy and aerial duels won. He managed to do well in these areas during his time at Sevilla this season. Kasper Dolberg has had very limited playing time this season, so we looked at some of his stats from the previous season as well. 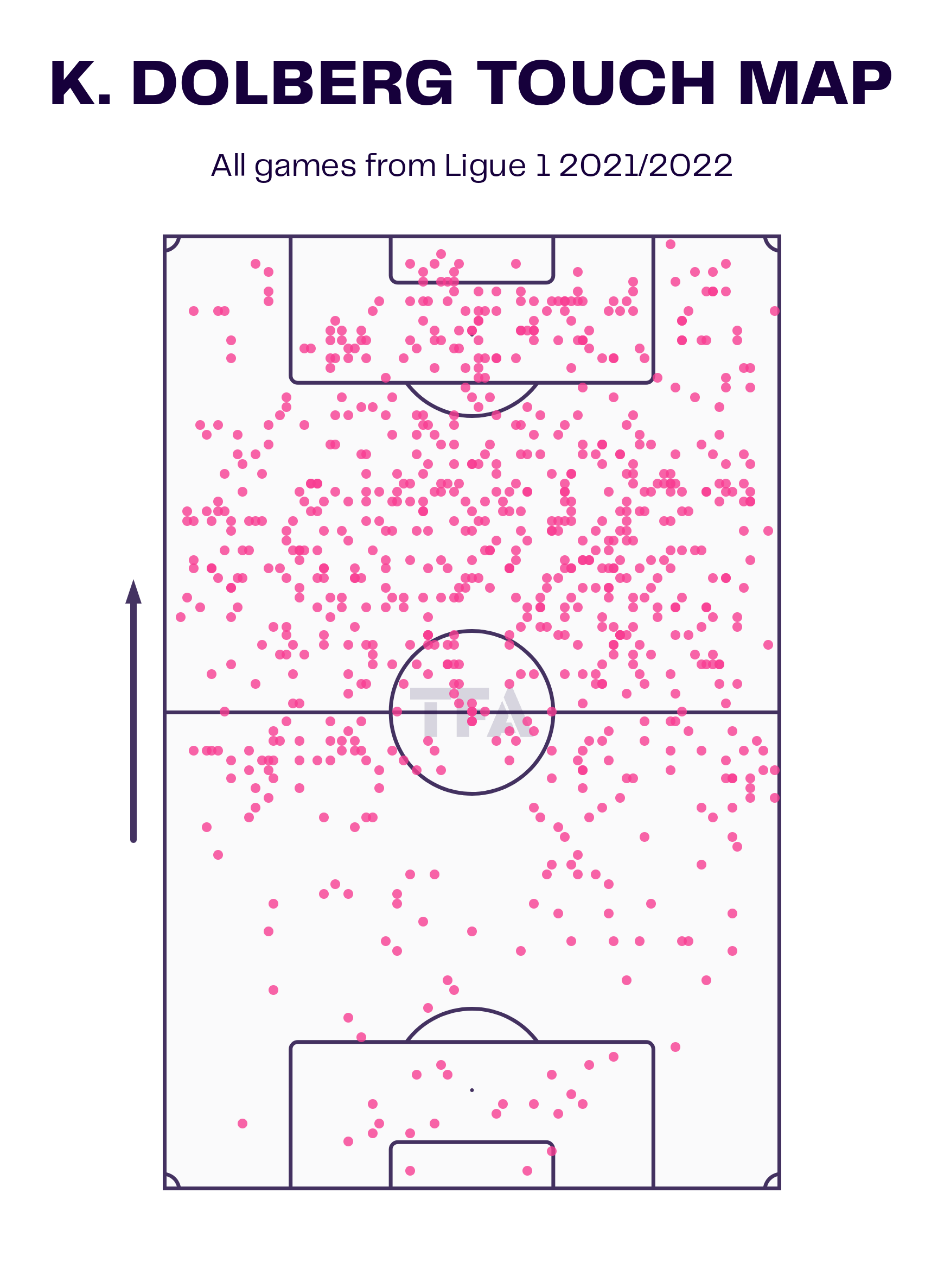 The above visual shows Dolberg’s touch map for Nice in last year’s Ligue 1. As we can observe from the map, he likes to get into attacking positions and create a threat. A right-footed striker with good technique and a sudden burst of pace, Dolberg is very capable of creating goals out of nowhere. As we can see from the visual, Dolberg took most of his touches in the attacking half and likes to get into the penalty box. He enjoyed an average of 3.21 touches in the penalty box last season with Nice and scored six goals. This season, the figure has come down to 2.55 touches in the penalty area for Sevilla. 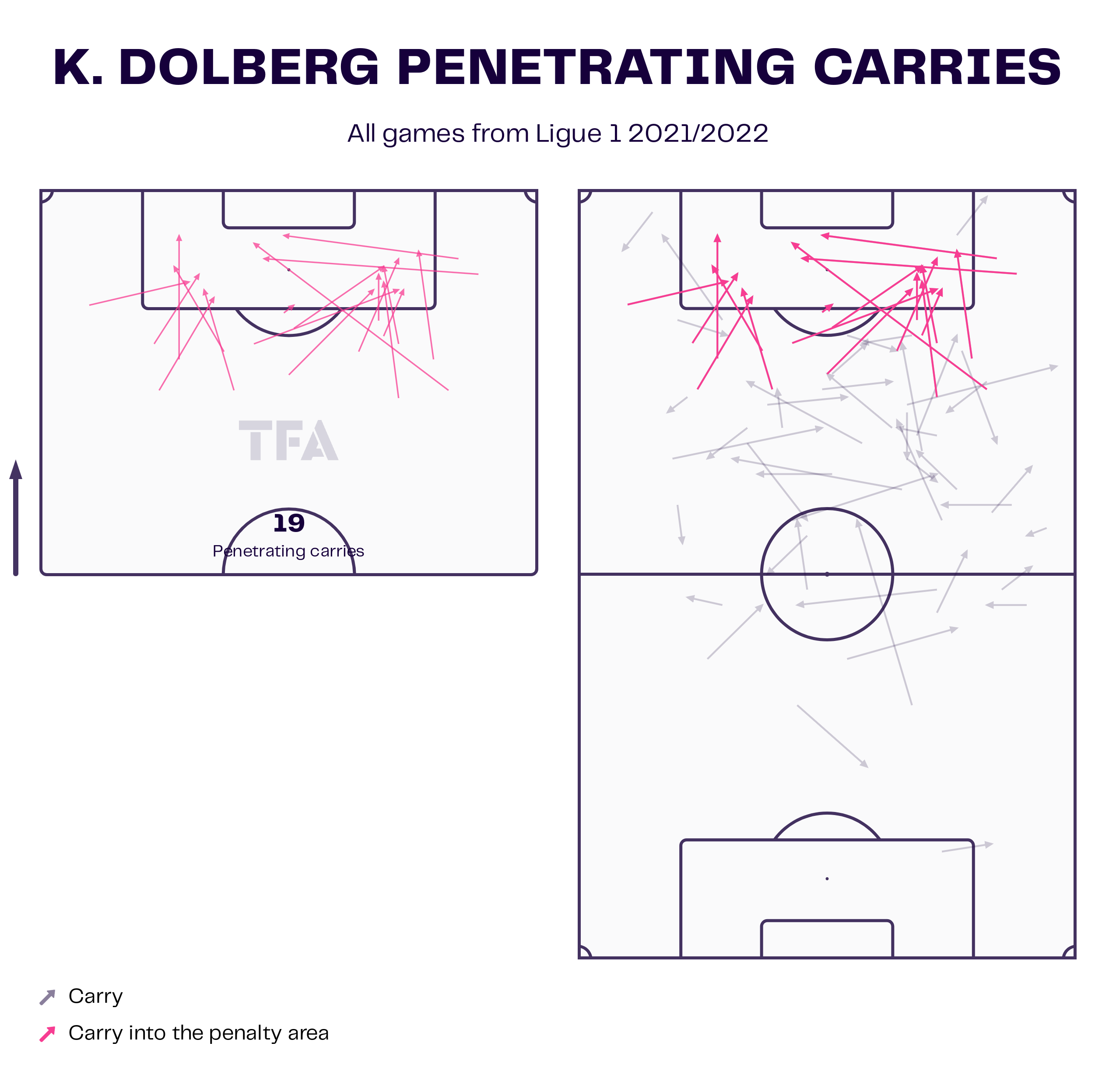 The above visual shows the penetrating carries made by Kasper Dolberg in the previous season with Nice. Fast and good on the ball, Dolberg can carry the ball into the final third all by himself. He averaged 2.29 dribbles per game with an average 47.1% success rate. This figure, however, came down to 1.7 dribbles per game with 50% success this season for Sevilla. 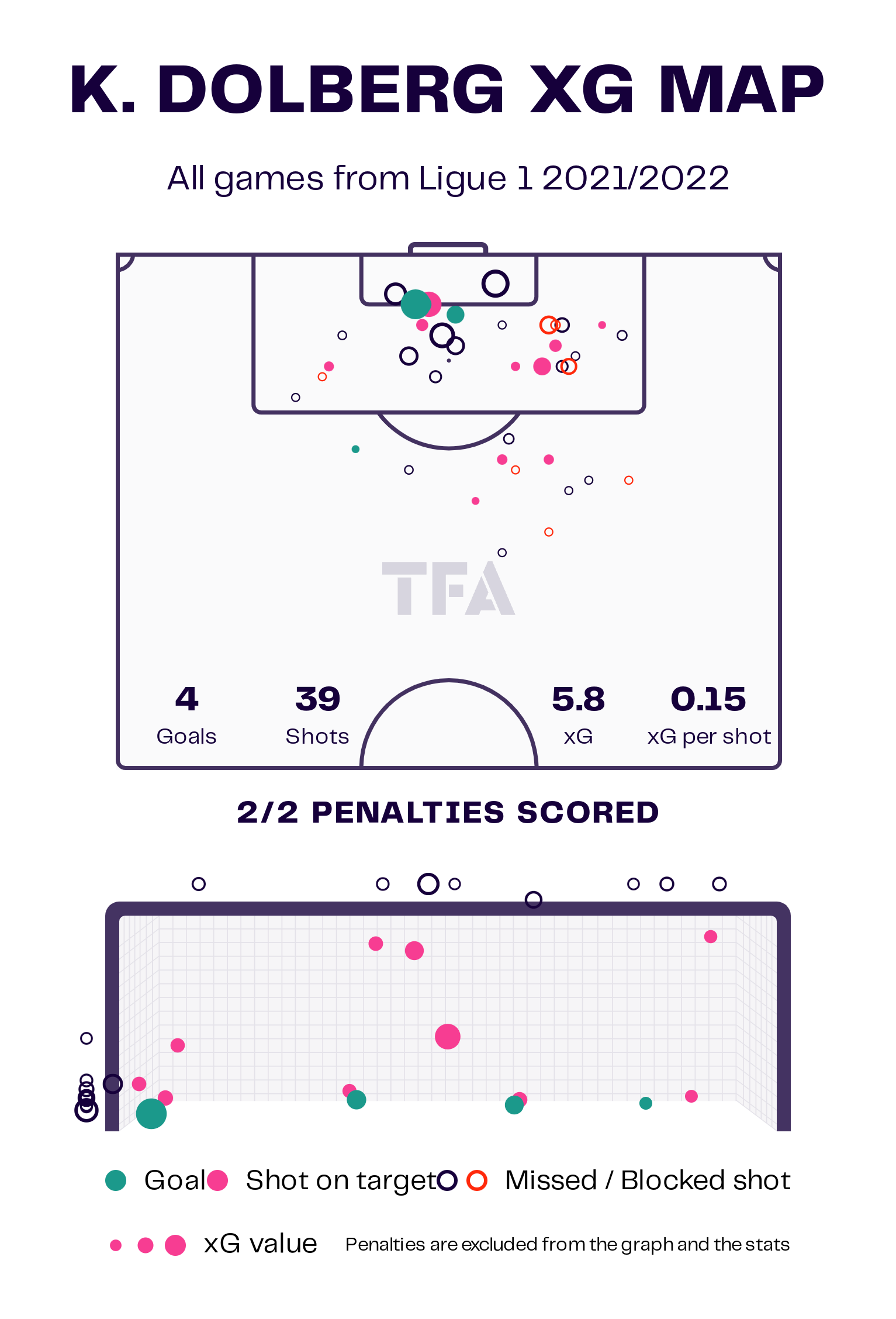 The above visual shows Kasper Dolberg’s xG map from last season. He scored six goals and assisted on two more. He attempted 39 shots with an average of 2.35 shots per game and an average of 39% accuracy. Out of the 39 shots, 14 were on target, and he converted four of those chances. He scored two from spot kicks as well. He had an xG rate of 5.8 and scored six goals last season. This season, the figures have come down to 1.27 shots per game with a success rate of 33%.

Can Dolberg combine with Kramaric to save Hoffenheim? 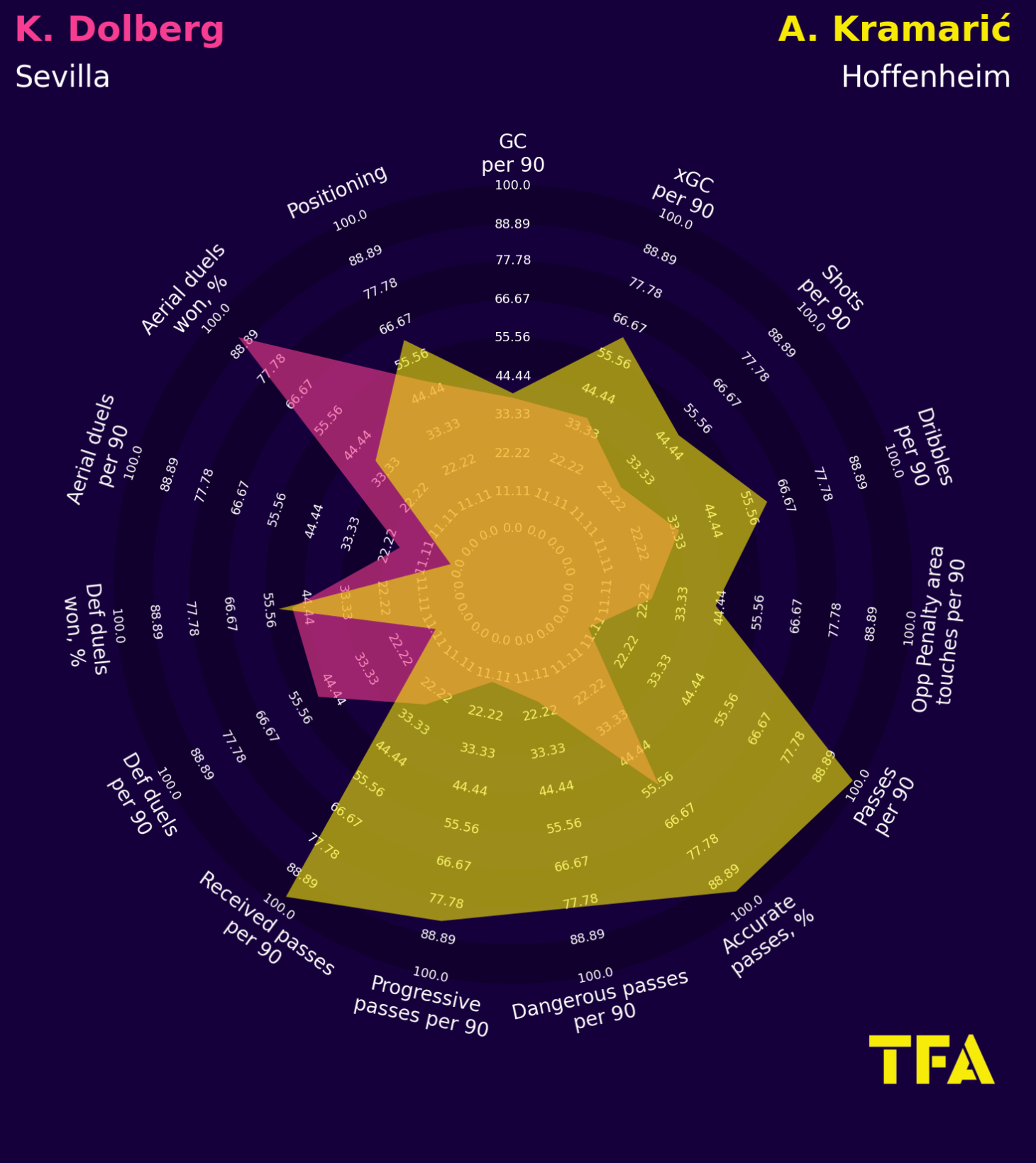 The above visual compares the radars of Kasper Dolberg and his attacking partner, Andre Kramaric. The Croatian has been the talisman for Hoffenheim, with three goals and two assists to his name. He scored twice for Croatia in the World Cup and is looking in good touch. The 31-year-old has better stats this season in passing, dribbles, shots, and goal contributions per 90 minutes. On the other hand, Dolberg has better stats in defensive duels and aerial duels. If the duo clicks together, Hoffenheim could stand a chance at reviving their fate.

How can Dolberg help Hoffenheim? 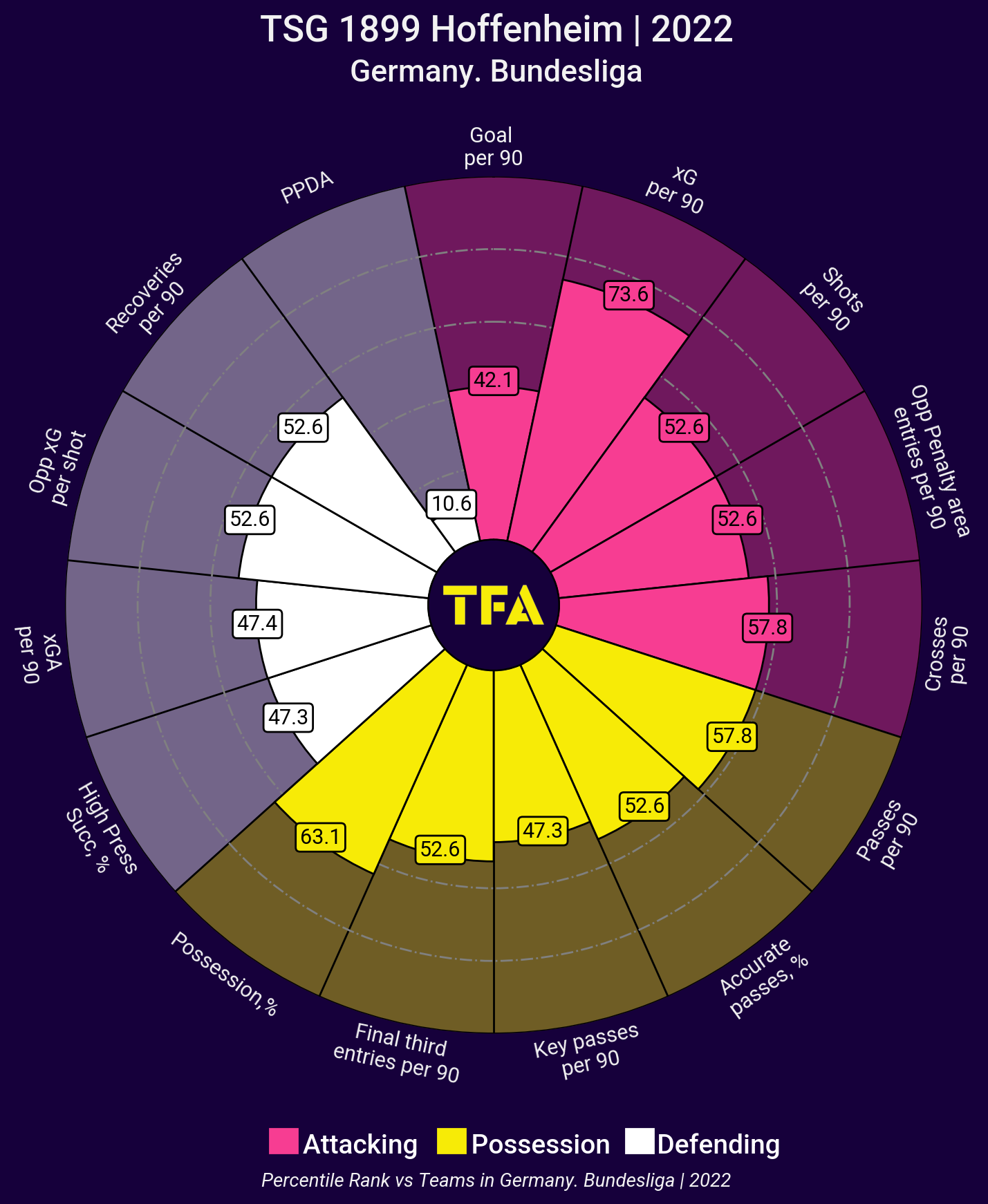 The above visual shows Hoffenheim’s percentile rank compared to other teams in the Bundesliga. As we can see, they are average in almost all attacking stats. This is where Dolberg, on his day, can contribute. He is a striker with good dribbling skills and no hesitation to shoot. He also gets into the box a lot, which will not only improve their stats but also give them an extra weapon in the penalty box. Another area where Dolberg does well is in aerial duels. So he can meet the crosses his teammates play into the box, providing an extra option in attack.

Given that Kasper Dolberg has had a pale season so far, the odds are very unlikely to change in both markets. However, if the Danish striker can regain his goal-scoring form, Hoffenheim’s 1×2 odds may fall and the over/under lines may rise.

Kasper Dolberg was one of the brightest talents to play for Ajax and was deemed the next Bergkamp. However, his performance and statistics have fallen short of expectations. However, both the player and the club would like to see Dolberg reinvent himself at his new club.

Under the microscope: Why clubs across Europe are looking to sign...