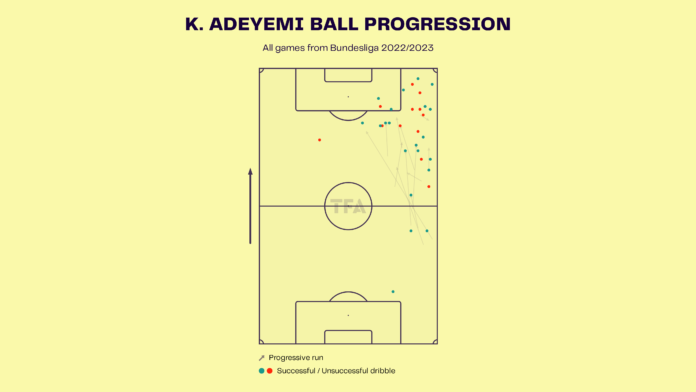 Karim Adeyemi was one of the breakout stars of the Austrian Bundesliga last season, and big clubs were in line to sign him. Borussia Dortmund had the last laugh as they signed the youngster from Salzburg. However, the wonderkid has yet to produce wonders in the yellow and black of Dortmund. Adeyemi, who was regarded as one of the finest young talents of the Bundesliga, has had a slim debut season at Dortmund and has not opened his scoring account yet. We look at some of his stats to understand why the young superstar has found it difficult to get going at Borussia Dortmund. 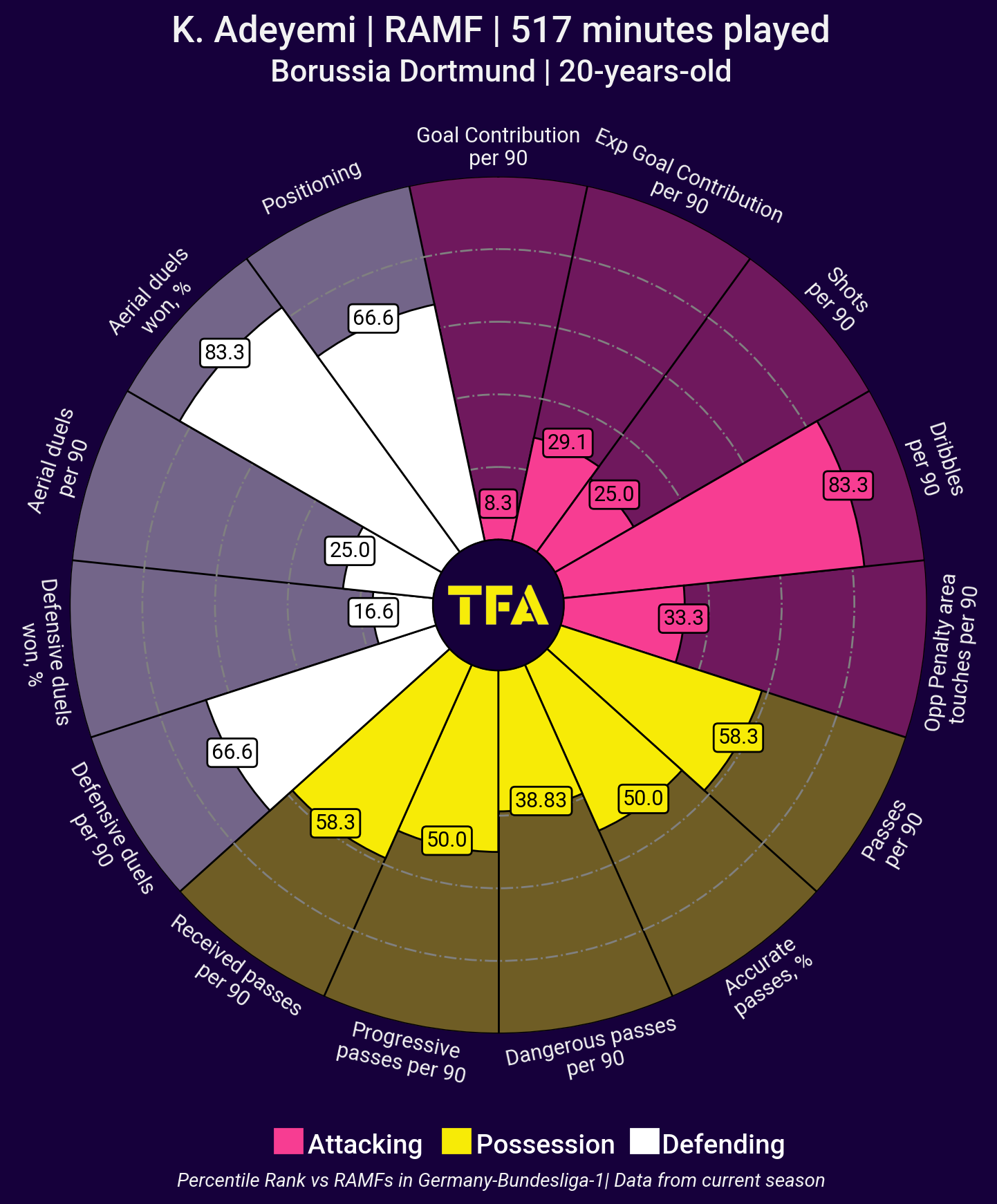 Karim Adeyemi has made 11 appearances this Bundesliga season, starting seven of them. He has not managed to score a goal or assist one in the Bundesliga. But he has scored one goal each in the UEFA Champions League and DFB Pokal. 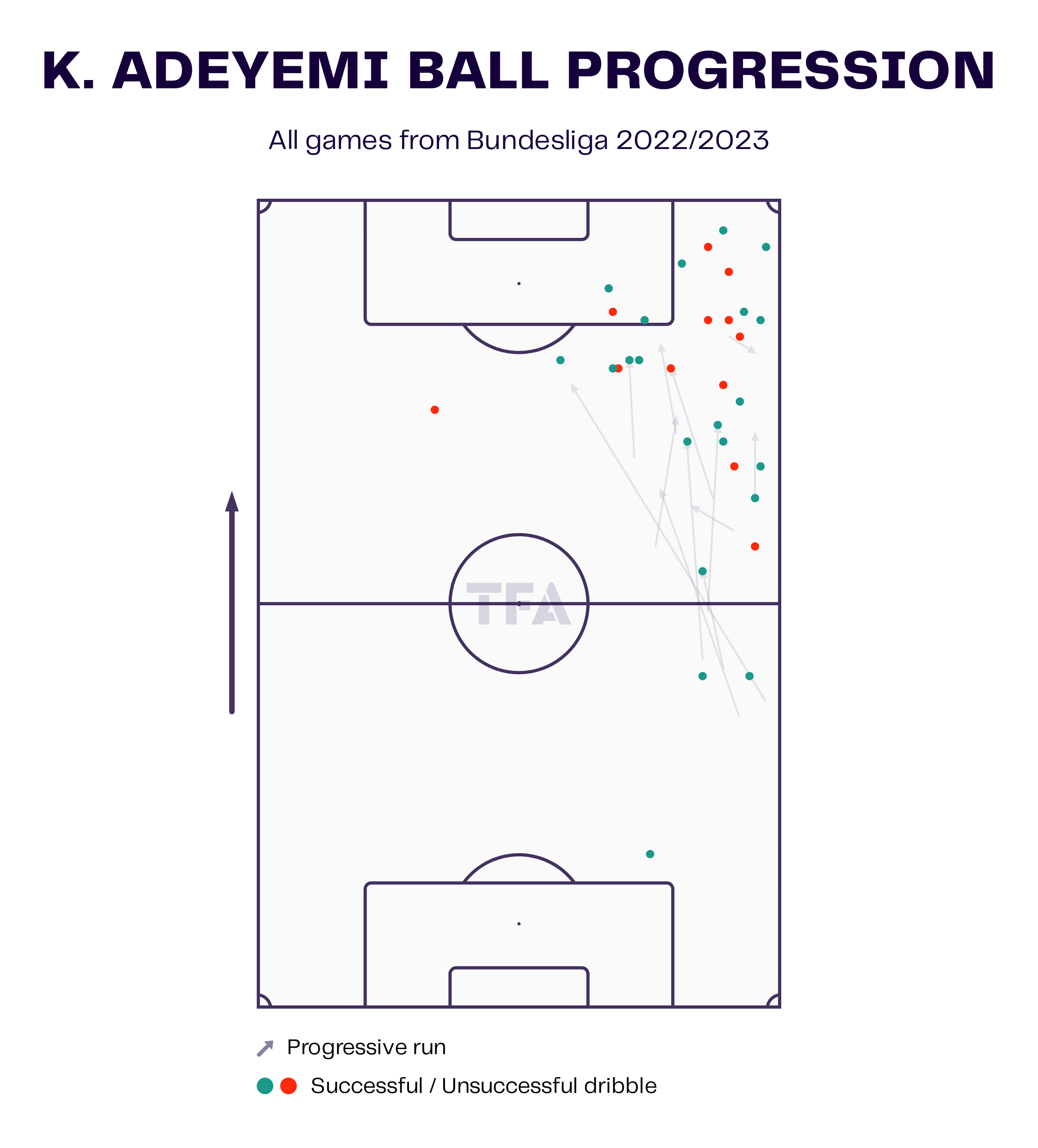 Dribbling is undoubtedly one of Adeyemi’s biggest strengths. He is ranked in the top 83.3 percentile for dribbles per 90 and makes around 6.35 dribbles per game with a success rate of 55.8%. Adeyemi is quick and smart and is therefore tough to stop. He goes past defenders with ease with his pace. He either cuts inside to shoot or finds the free man with a cross or a pass. His dribbling stats from last season have taken a hit, falling from 7.54 to 6.35 dribbles per game. His success rate has, however, gone from 44.2% to 55.8%. 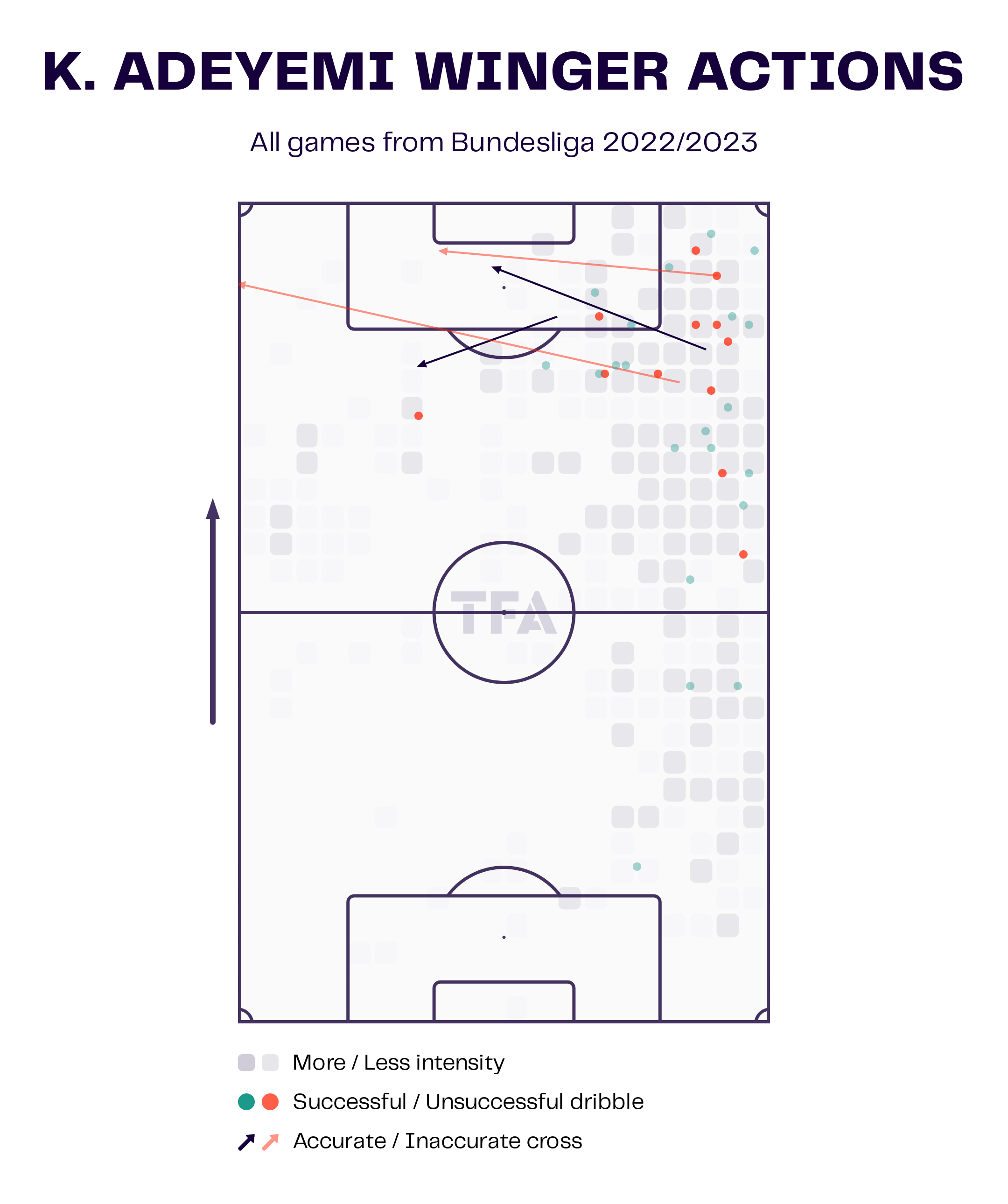 Karim Adeyemi either plays as a right-attacking midfielder or as a right winger. When he plays as a winger, he stays wide on the pitch and dribbles forward. He also sometimes whips some crosses into the box. Adeyemi has an average of 1.4 crosses per game with a 35.3% success rate. This has also come down from 2.34 crosses last season. When he cuts inside, he dribbles into the box and enjoys an average of 3.46 touches in the penalty area. Unfortunately, this is also a decline from last season’s 5.48 touches in the penalty box per game. 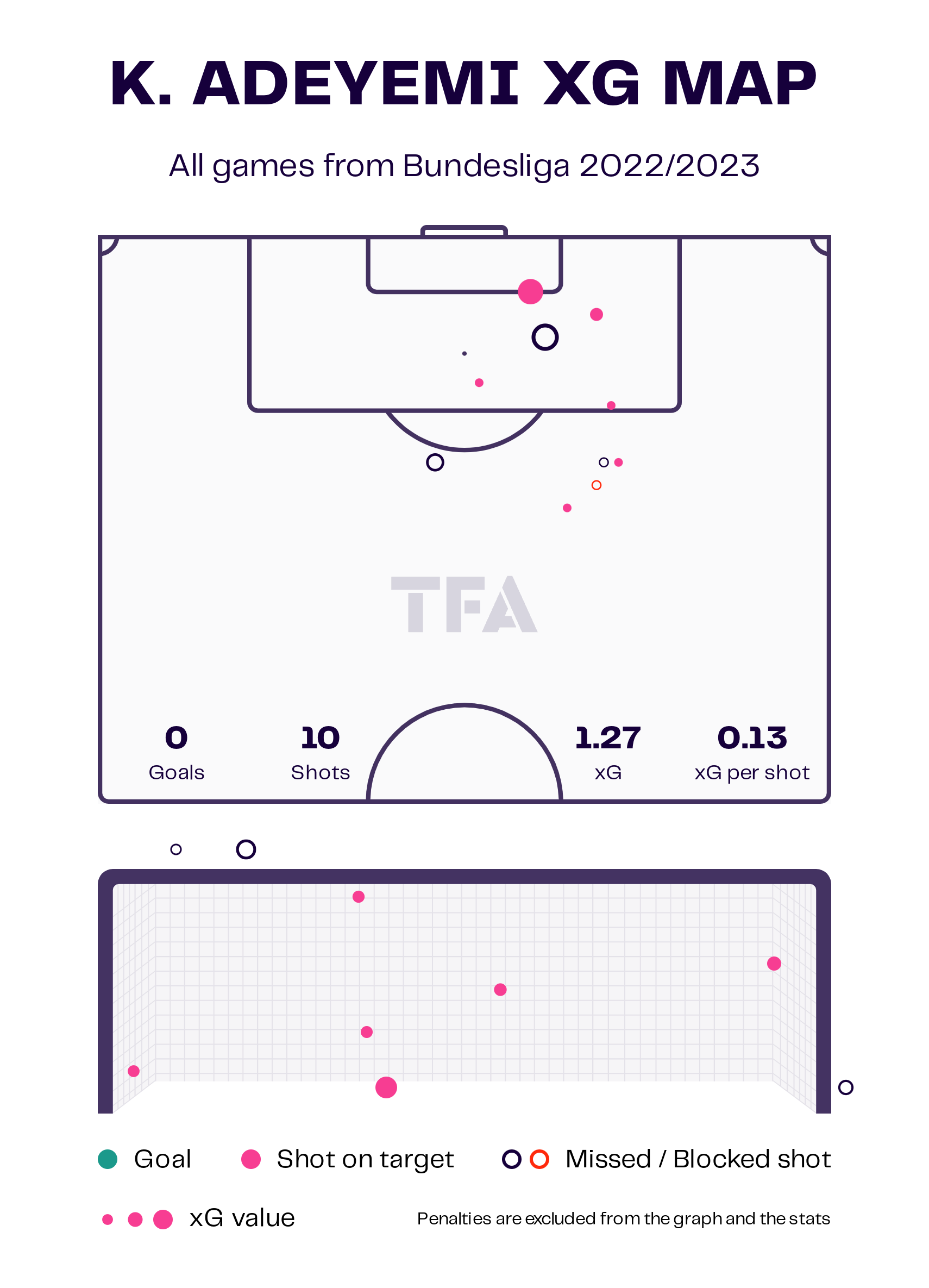 Perhaps one of the biggest disappointments and surprises about Adeyemi’s current season is that he has not managed to score any goals in the Bundesliga. He has taken a total of ten shots with an average of 1.74 shots per game. But he has found it difficult to beat the goalkeeper and find the back of the net. Of these ten shots, five were from inside the penalty box, and six were on target. He has an xG rate of 1.27, but still, Adeyemi has failed to put the ball past the keeper. 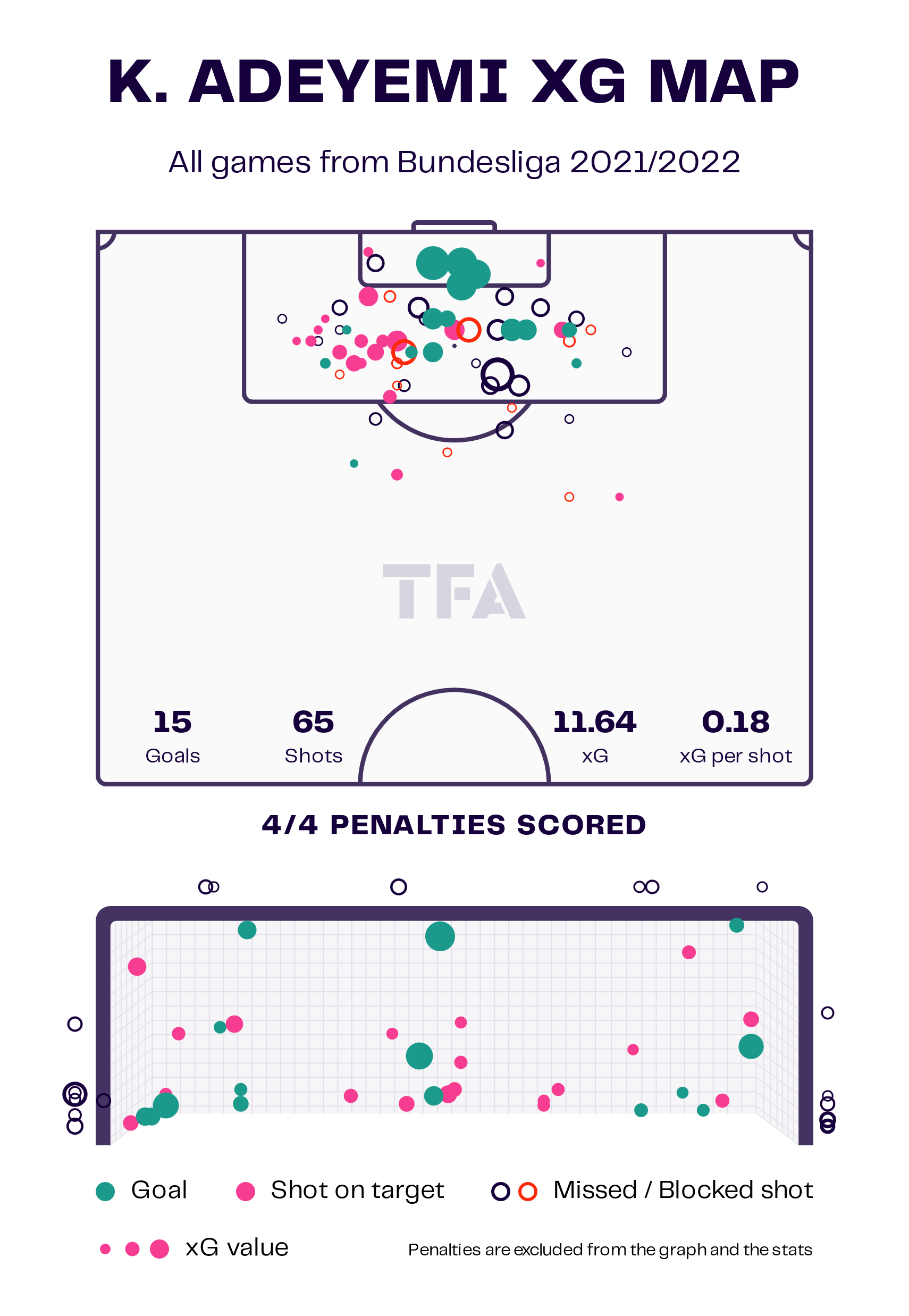 Adeyemi’s goal-scoring form this season is in complete contrast to last season. Last season, he scored 19 goals, with 15 of them coming from open play and four from penalties. He attempted a total of 65 shots and scored some fantastic goals. Out of the 15 goals, 14 were from inside the penalty box, where he averaged 6.16 touches per game. Adeyemi took an average of 3.06 shots per game with 55.6% accuracy and had an average of 0.84 goals per game. While the German Bundesliga is not the same as the Austrian Bundesliga, everyone expected Adeyemi to score more goals. 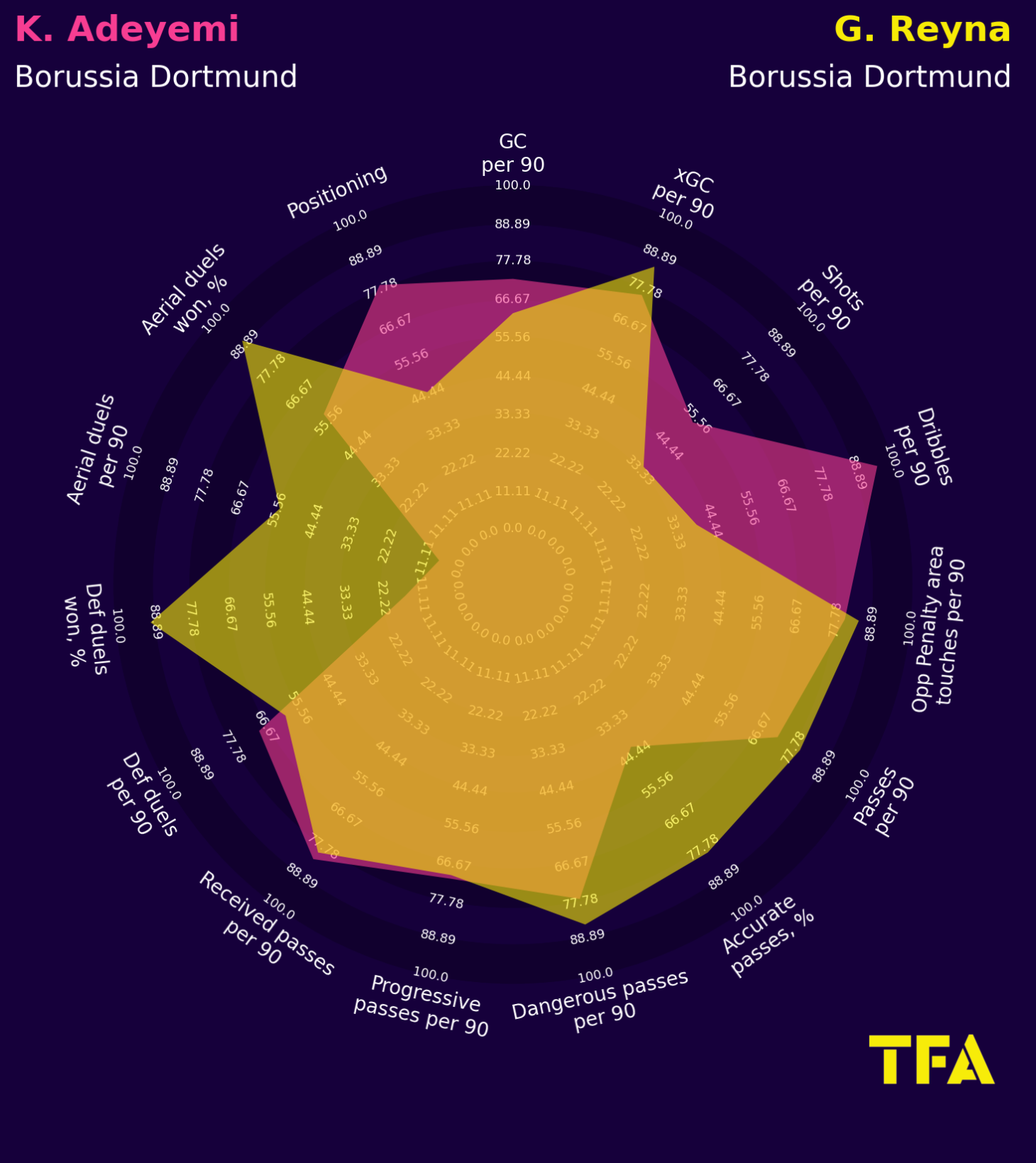 Borussia Dortmund have a bunch of young players, and two names that usually make way for each other are Karim Adeyemi and Giovanni Reyna. The former has made 11 appearances this season while the latter has made one fewer. However, Reyna has two goals to support his claim to the starting eleven. Adeyemi has better stats in dribbles, shots, positioning, and goal contributions per 90, while Reyna dominates in every other parameter. But coach Edin Terzic has stuck by Adeyemi, giving him seven starts while the American only got three.

Big clubs were keen to sign Karim Adeyemi from Salzburg last season, but it was Borussia Dortmund who had the last laugh. However, Dortmund will be hoping that the German youngster will improve his performance and start producing results as they sit in the sixth position in the Bundesliga.

Under the microscope: How the Hungarian youngster is becoming a key...