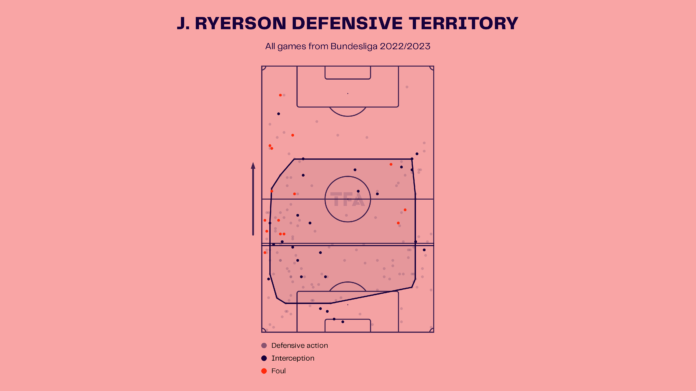 Union Berlin is enjoying another good season in the Bundesliga. They are currently placed in the fifth position with 27 points from 15 matches. Therefore, naturally, some eyes have shifted in their direction, and according to reports, some Premier League clubs are interested in signing their wing-back Julian Ryerson. The 25-year-old Norwegian is having a stellar season and has contributed both in attack and defence to their successful run. Therefore, we look at some of his stats to understand why Premier League clubs are interested in signing the Norwegian.

Julian Ryerson has made 13 appearances this season, starting 12. His versatility in playing on both sides has given his team great flexibility. 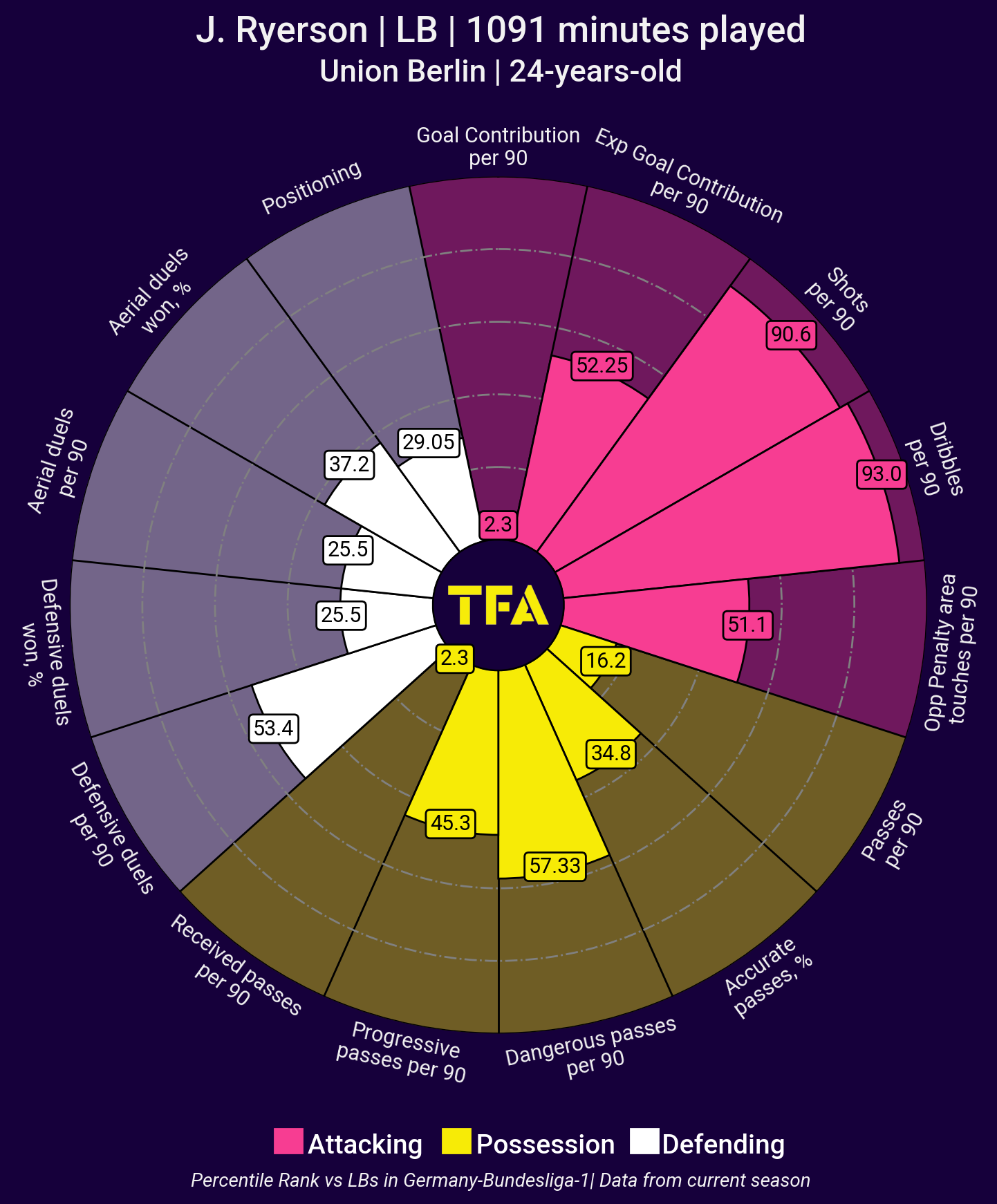 The above visual shows Julian Ryerson’s percentile rank compared to other left-backs in the Bundesliga. As he usually plays as a wing-back in front of a three-man backline, he doesn’t contribute as much to defence as he does when he plays as a full-back. Therefore, his defensive stats are below average. On the other hand, he has good attacking stats and is ranked very highly for both shots and dribbles per game. His stats suggest that he needs to improve his passing too, as he is given an average percentile score for passing. 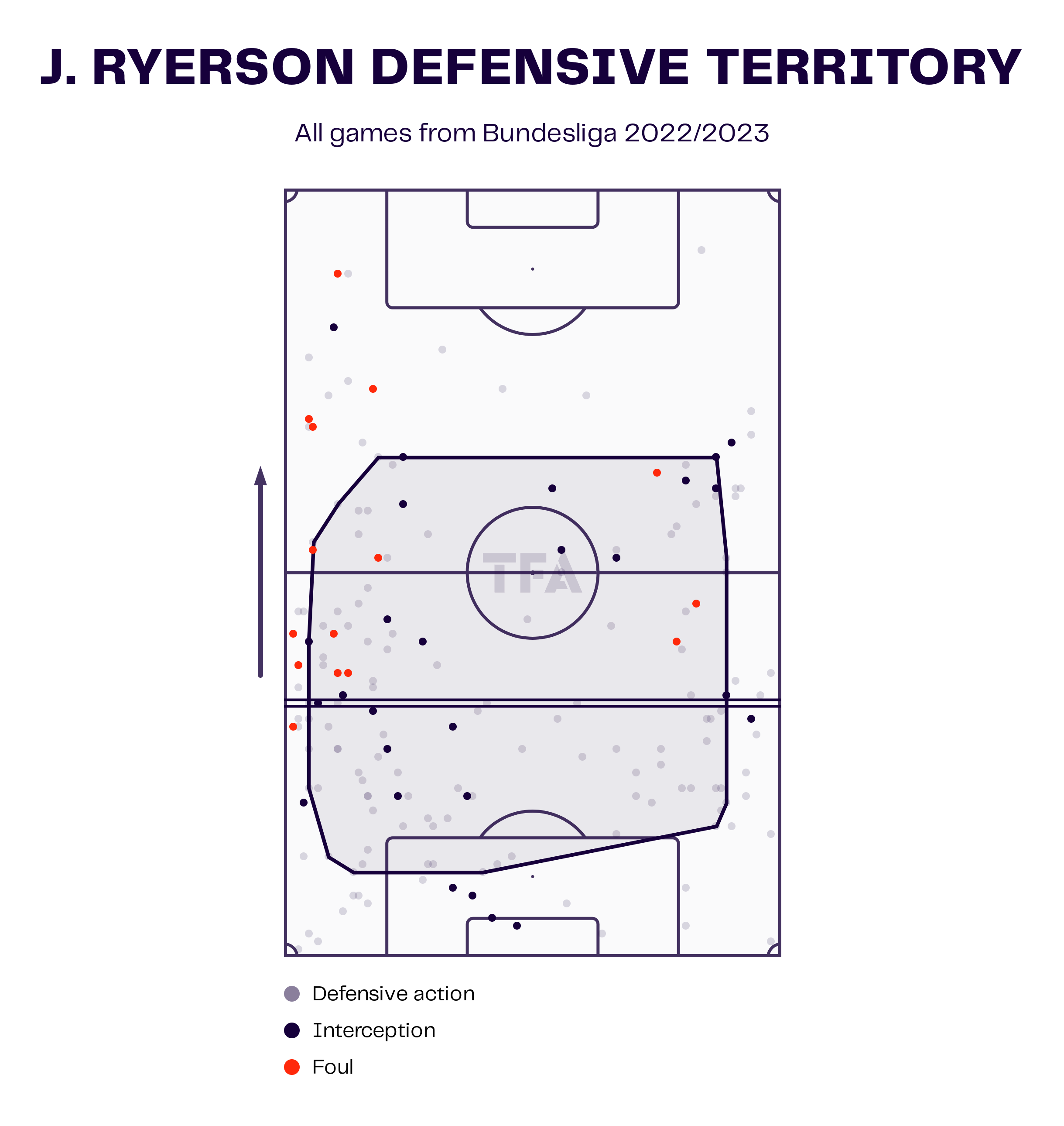 The above visual shows Ryerson’s defensive territory. The 25-year-old plays on both sides and therefore has covered both sides of the pitch. This season, he has made an average of 6.35 defensive duels per game with a success rate of 58.4%. Even though he is not ranked very highly for aerial duels, he has taken part in an average of 1.81 aerial duels per game with 45.5% success as well. Moreover, he makes around 3.96 interceptions per game, both in the defensive and attacking halves. 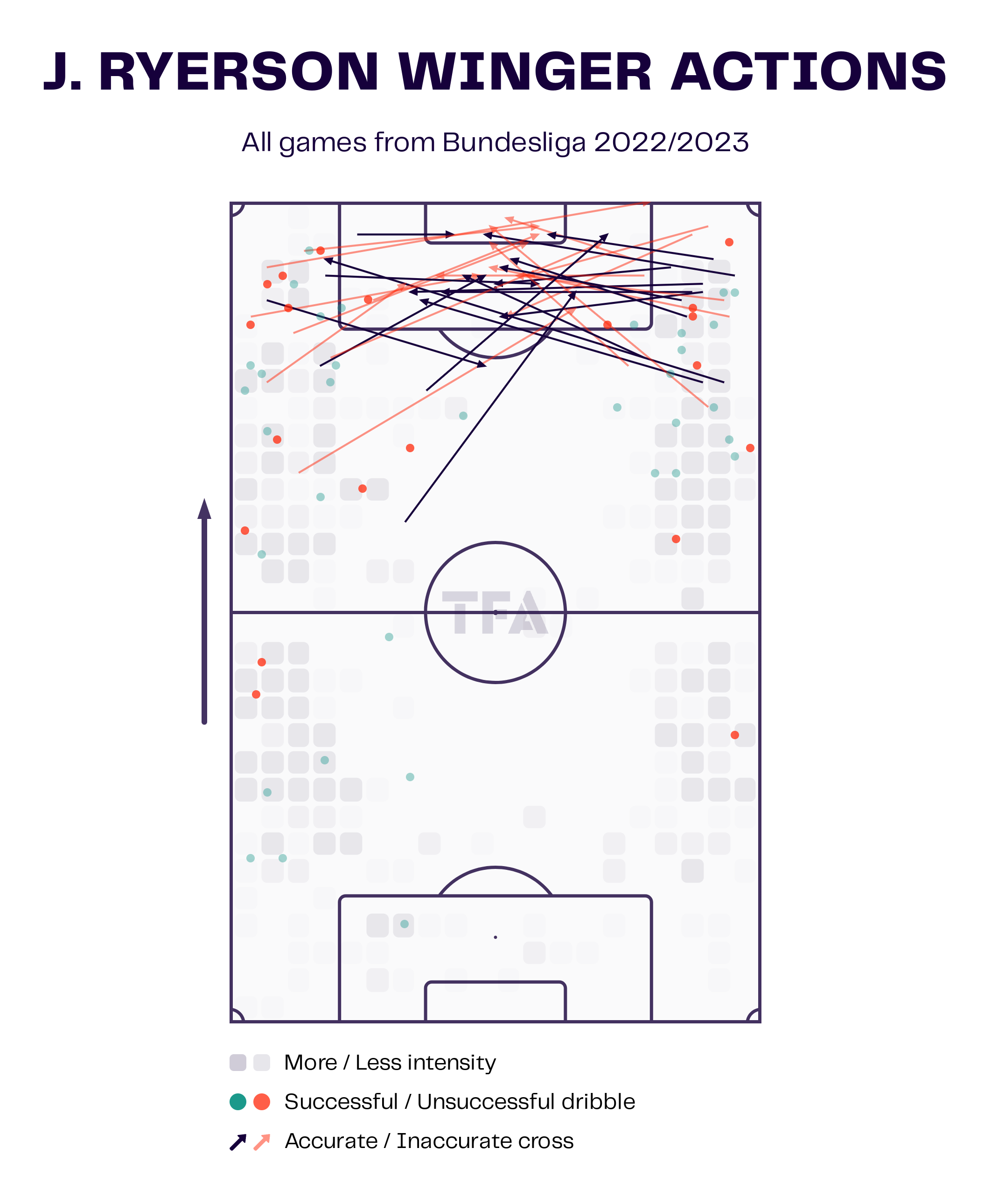 Ryerson usually plays in front of a three-man backline, either as a left or right midfielder or as a wing-back. This allows him to make dribbles or play crosses from the wing. On average, he makes around 3.38 crosses per game with a success rate of 41.5%. As Union Berlin has some tall players, these crosses often prove to be dangerous. He has an average of only 1.07 touches in the penalty box, which tells us that he likes to stay wide more. 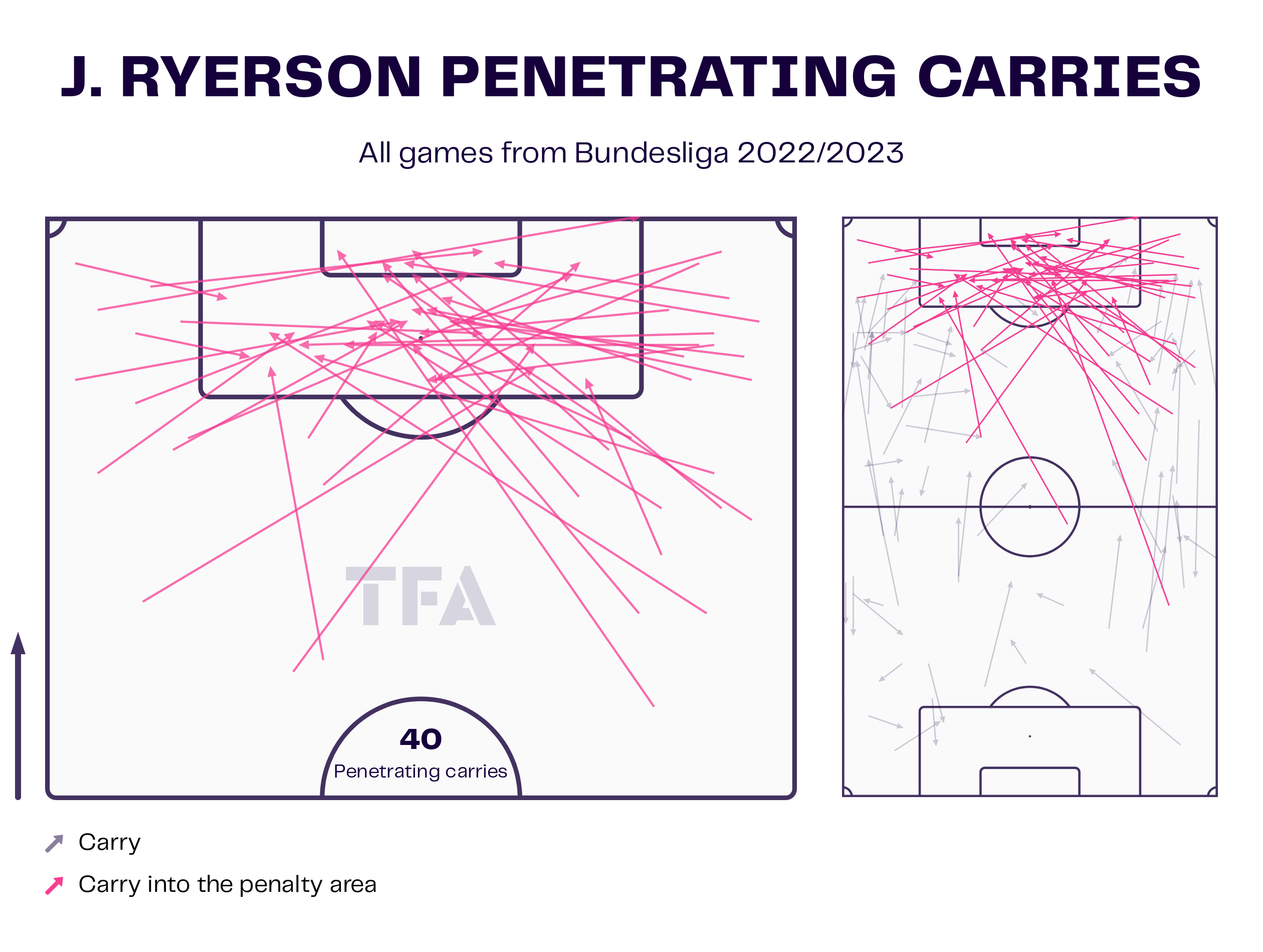 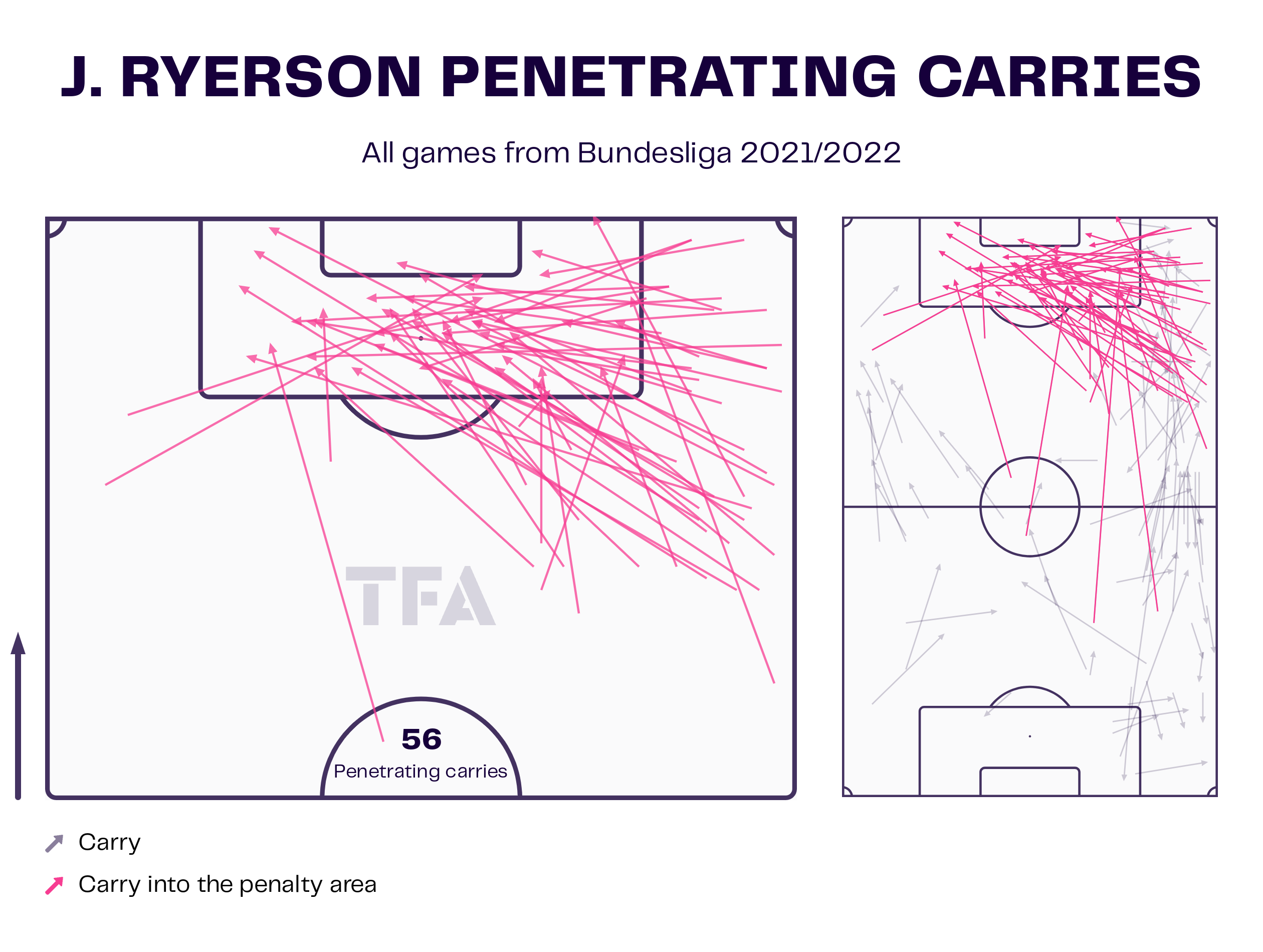 The two visuals above show the penetrating carries Julian Ryerson made in the current season and the season before. This season, Ryerson has made 40 penetrating carries already, closing on his figure of 56 from last year. He has largely improved his dribbling, as he makes around 4.45 dribbles per game this year compared to last year’s 3.01 dribbles. Thankfully for Union Berlin, his success rate in dribbles has also seen an improvement, as the figure has gone from 44.2% last season to 63% this season.

In addition, Ryerson also takes part in around 8.33 offensive duels, winning 49.5% of them. The number of offensive duels per game has also seen an improvement from last year’s 6.02 duels per game. This shows an increase in confidence and the desire to take players on, both of which are good signs for both the player and the team. 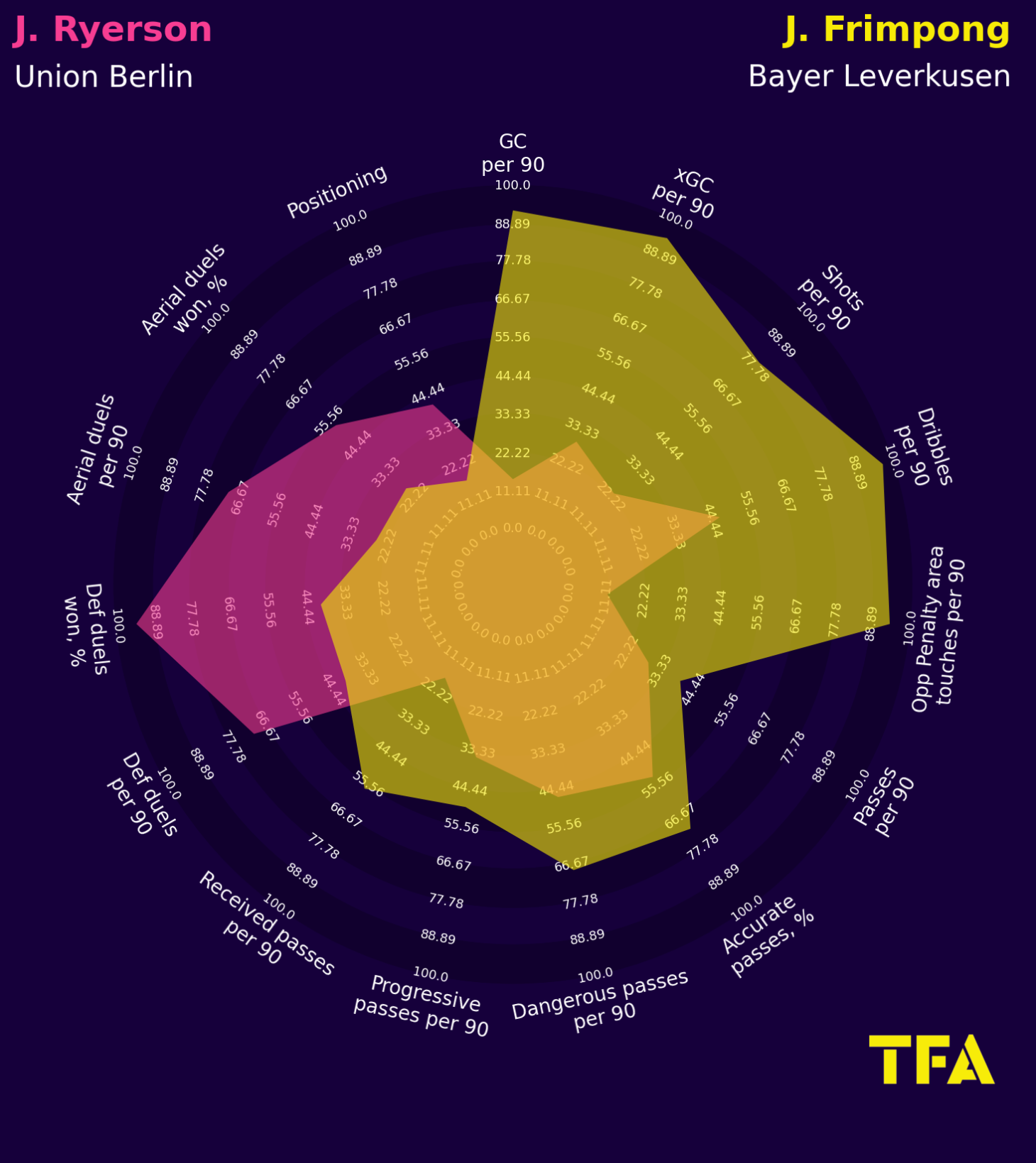 The above visual compares Julian Ryerson’s radar with that of Bayer Leverkusen’s wing-back Jeremie Frimpong. Both players have played well for their respective clubs this season and are enjoying a good season. As we can observe from the visual, Frimpong has better stats in both attacks and passing, while Ryerson dominates defensively. The former contributes more towards the goal through more shots, dribbles, and passes, while the latter has made and won more defensive duels and aerial duels.

As an important member of the Union Berlin team, his presence is likely to change the odds for the match. Julian Ryerson’s presence could therefore very well increase their odds in the 1×2 market, while the over lines are also expected to see a slight increase.

Julian Ryerson’s performance this season has not gone unnoticed, as Premier League clubs such as Brighton have expressed their interest in signing the wing-back. His contributions so far have been important for Union Berlin, and coach Urs Fischer will be hoping that the player can keep up his good work.

Under the microscope: Why Daniel Olmo deserves more recognition