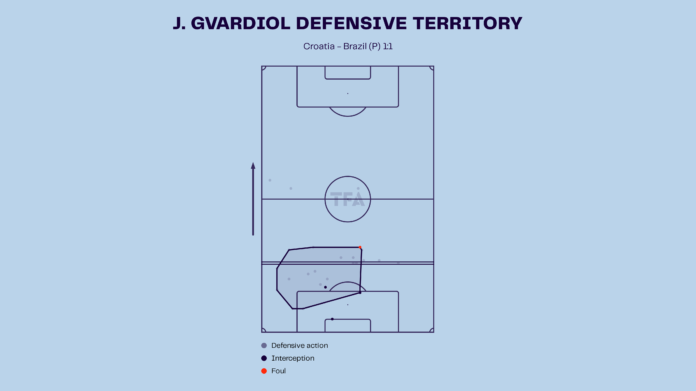 Josko Gvardiol is one of the rising talents of the Bundesliga. His brilliant performance has drawn the attention of big clubs in Europe like Liverpool and Real Madrid. The Croatian international is having a good run with RB Leipzig and is one of the most important players for the Croatian national team. He was instrumental in Croatia’s quarterfinal victory against Brazil on Friday. Gvardiol made some crucial tackles and made it incredibly difficult for Brazil’s front line to go past him. With a place in the semi-final of the World Cup at stake, the 20-year-old pulled out a top performance. We look at some stats to understand how Josko Gvardiol kept a blistering Brazilian attack out. 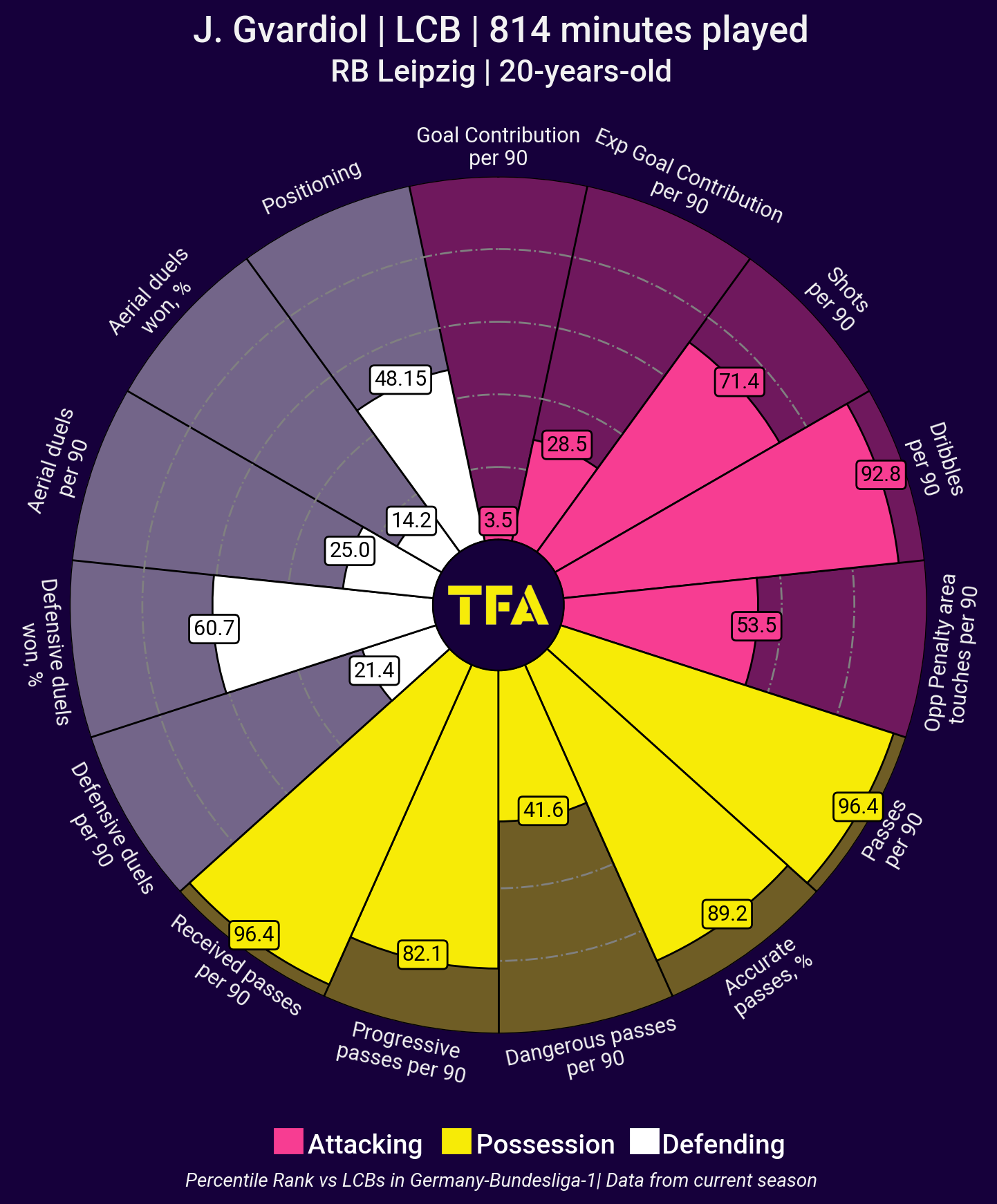 Josko Gvardiol has started all the matches of the World Cup so far and has been a monumental figure in the Croatian backline. He has started all five matches for Croatia and has been solid at the back for them. The above visualisation shows the percentile rank of Gvardiol compared to other left-centre backs in the Bundesliga. He is good defensively and is ranked in the top 60 percentile for defensive duels won, which is above average. As the pizza chart suggests, his best trait is his passing. He is ranked in the top 89.2 percentile for accurate passes and the top 96.4 percentile for passes per game and passes received per game. He has good dribbling skills too and often carries the ball forward to help the team attack. 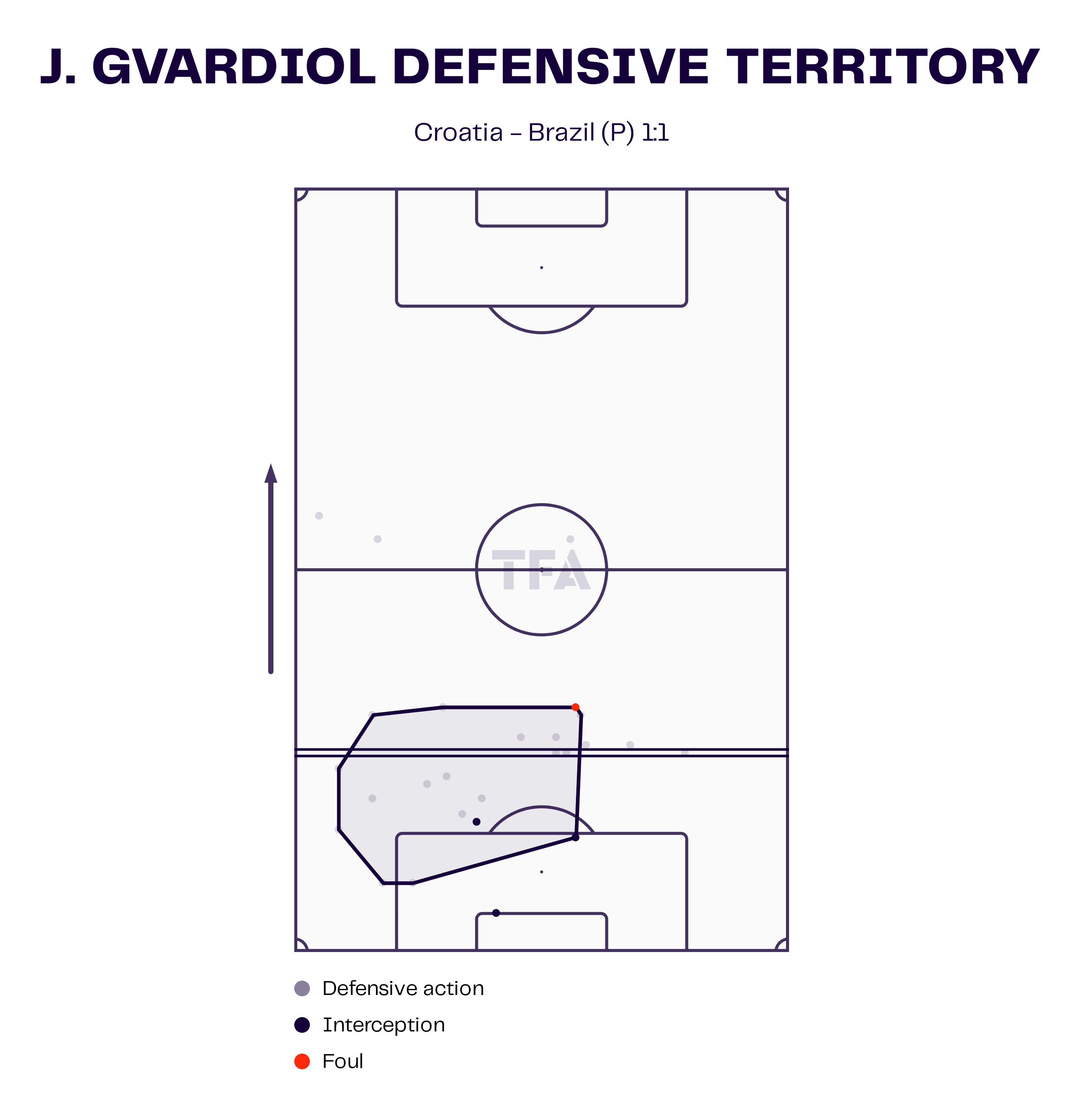 Josko Gvardiol played as a left-centre back for Croatia in the game against Brazil and was almost impossible to get past. He stood like a rock and made life difficult for the Brazilian front line. He was almost everywhere and made some crucial interceptions. One of the interceptions was made on the edge of the 6-yard box. 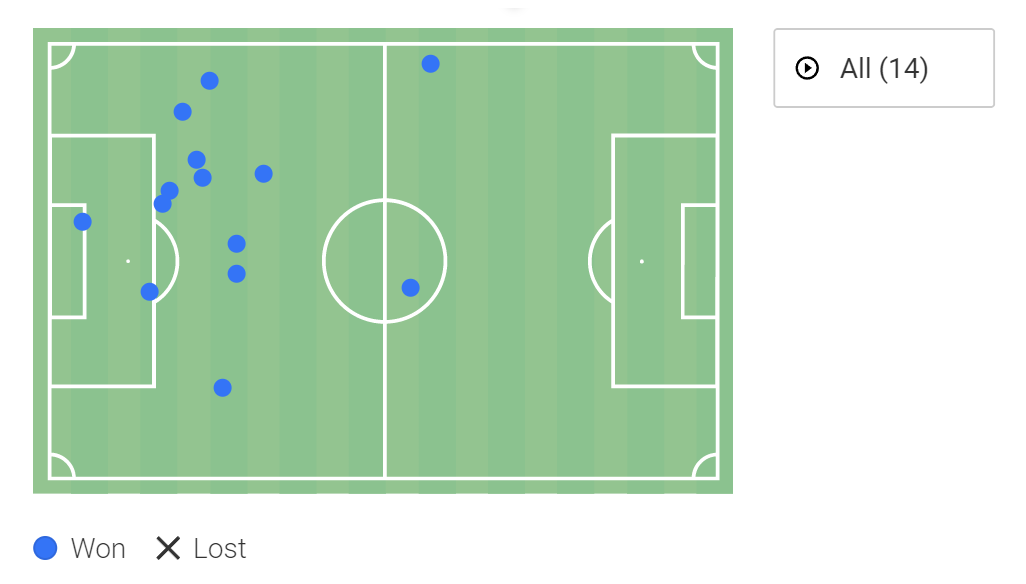 The above visual shows the recoveries made by Josko Gvardiol against Brazil. We can observe from the visual that he recovered the ball in crucial positions, which prevented Brazil from scoring. He made 14 recoveries in the match, with 12 of them in his half. These recoveries were crucial to stopping the likes of Neymar Jr. and Vinicius Jr. 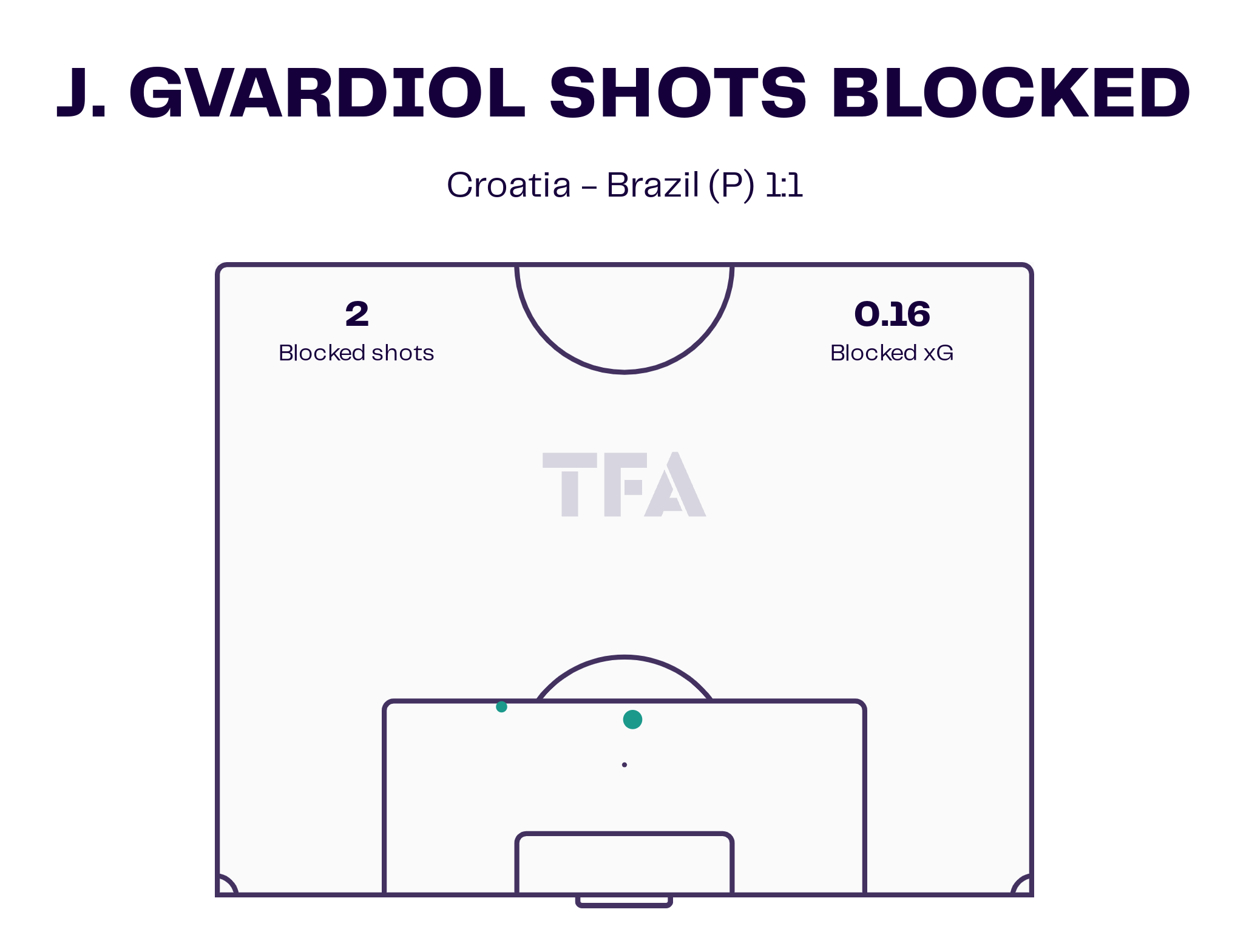 Gvardiol blocked two shots against Brazil in the crucial encounter. We can observe from the position of the blocked shots that those were important blocks. Both blocks were made on the edge of the 18-yard box. Gvardiol was solid and made the defensive line compact, which made it hard for the Brazilians to manoeuvre through. Apart from these blocks, he made eight interceptions as well. 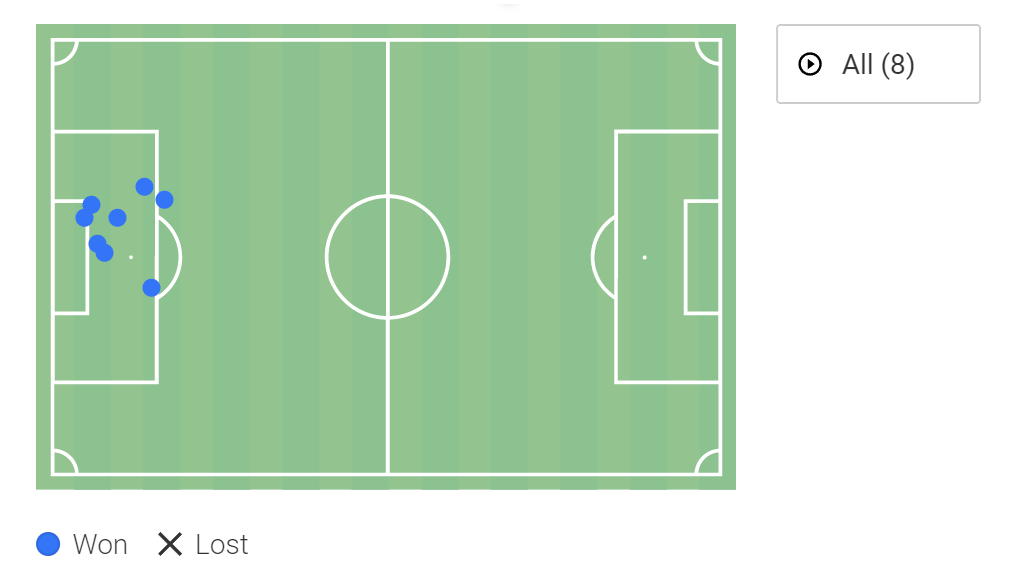 The above visual shows the interceptions made by Josko Gvardiol in the game against Brazil. The positions at which he made those interceptions indicate their importance. He was sometimes the only thing standing between Brazil’s attackers and the Croatian goal. He had eight interceptions and was inside the penalty box. 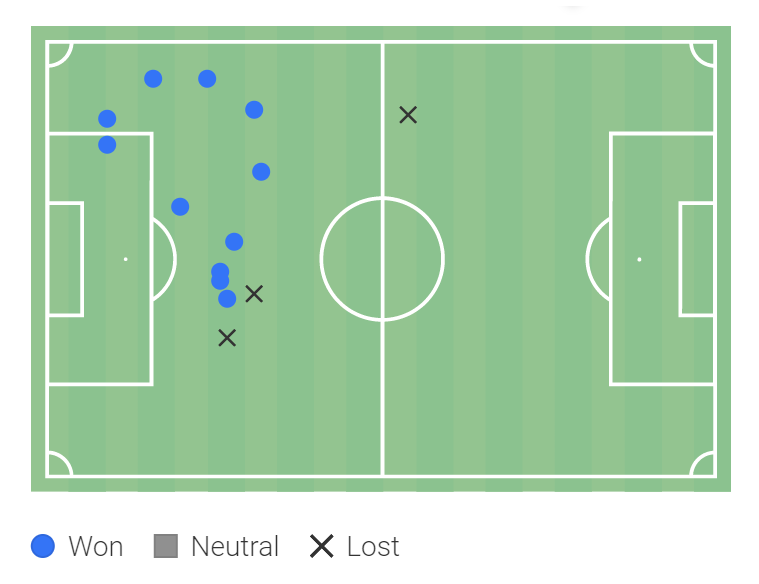 The above visual shows the defensive duels contested by Gvardiol in the same match. He took part in 14 defensive duels and won 11 of them. It was almost always impossible to dribble past him, and he made sure he took the sting out of Brazil’s attack. 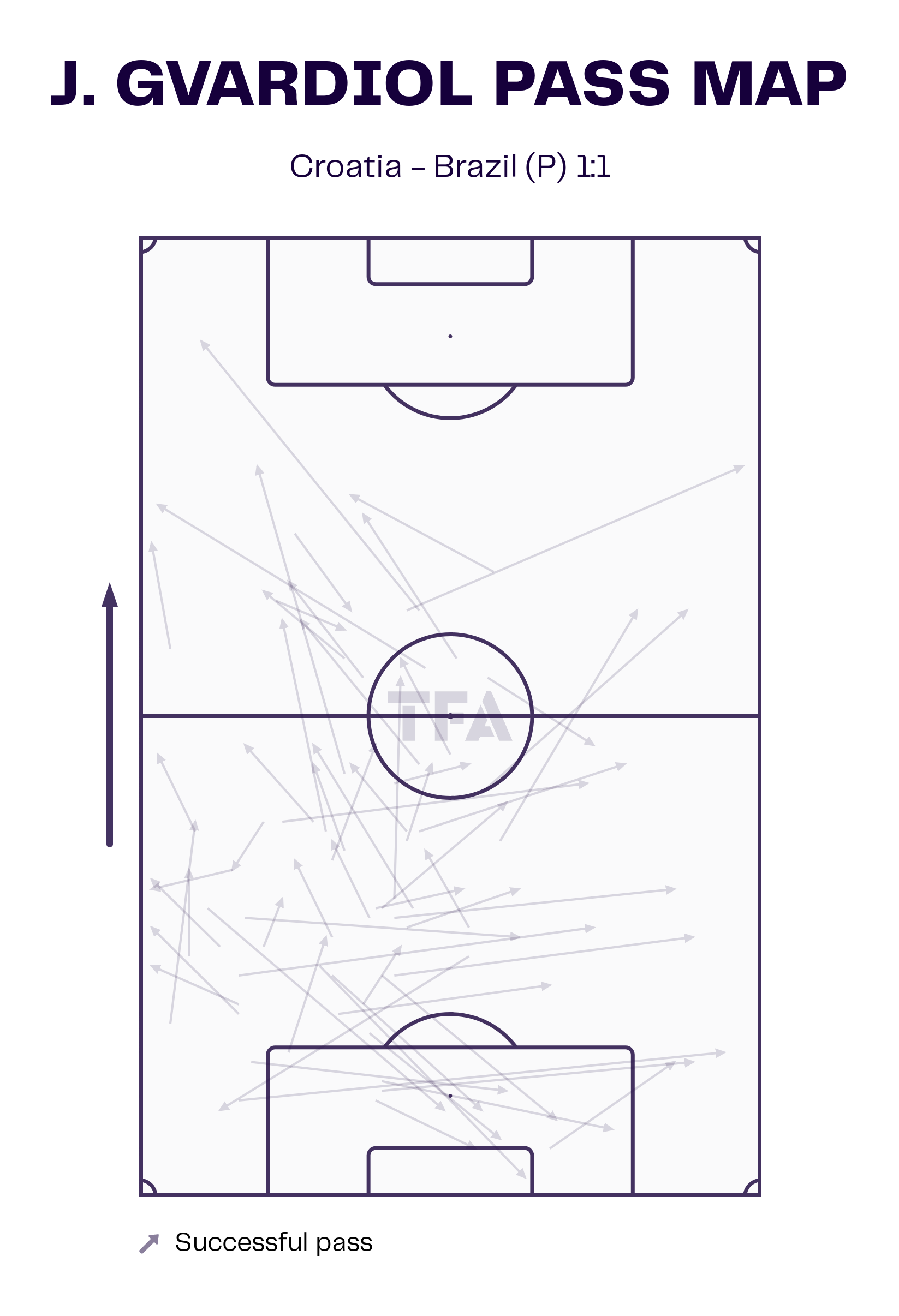 Gvardiol had a brilliant passing record against Brazil. He attempted 64 passes and completed 61 of them. The 20-year-old kept his cool and always chose the correct pass. He had a passing accuracy of 95% as well. 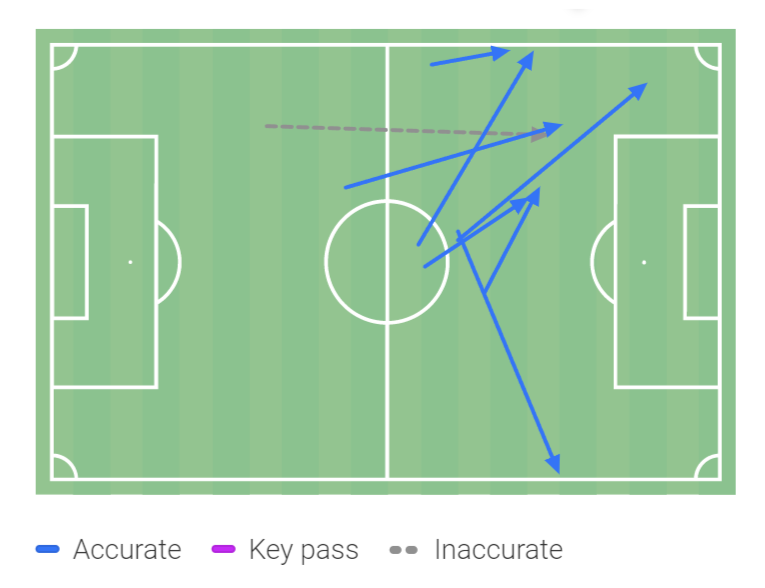 Overall, Gvardiol had an impressive game against Brazil and was a wall in the back. His defensive contributions, especially winning the ball in crucial areas, helped Croatia knock Brazil out of the World Cup. Many experts have heaped praise on the 20-year-old centre-back. With these performances, rumours continue to link him to major clubs throughout Europe, and it would not be surprising if he accepts one of them.