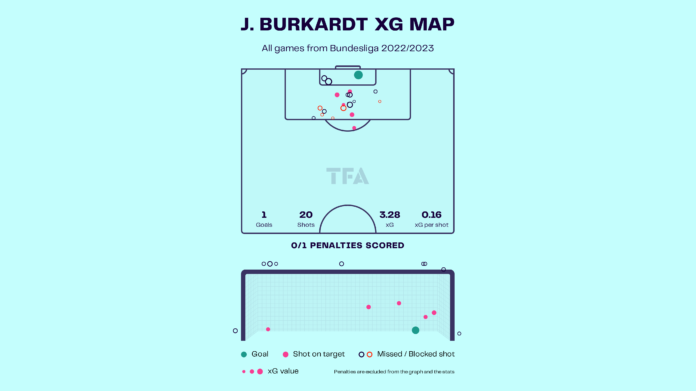 Mainz’s striker Jonathan Burkardt, who was compared to Miroslav Klose by some of his coaching staff due to the similarity in their playing styles, is having a pale Bundesliga season. Burkardt, who scored 11 goals and assisted three further goals last season, has failed to replicate the same form this season as Mainz have gone winless in the last four games of 2022. The young striker has just scored one goal this season, and the lack of goals has hurt Mainz. They have scored only 19 goals and conceded 24 in return. Therefore, we take a look at his stats to understand how his lack of form in front of the goal has affected Mainz.

Season in a nutshell

Jonathan Burkardt has made 11 appearances this season, with seven starts and four as a substitute. The 22-year-old has scored only one goal and assisted two. 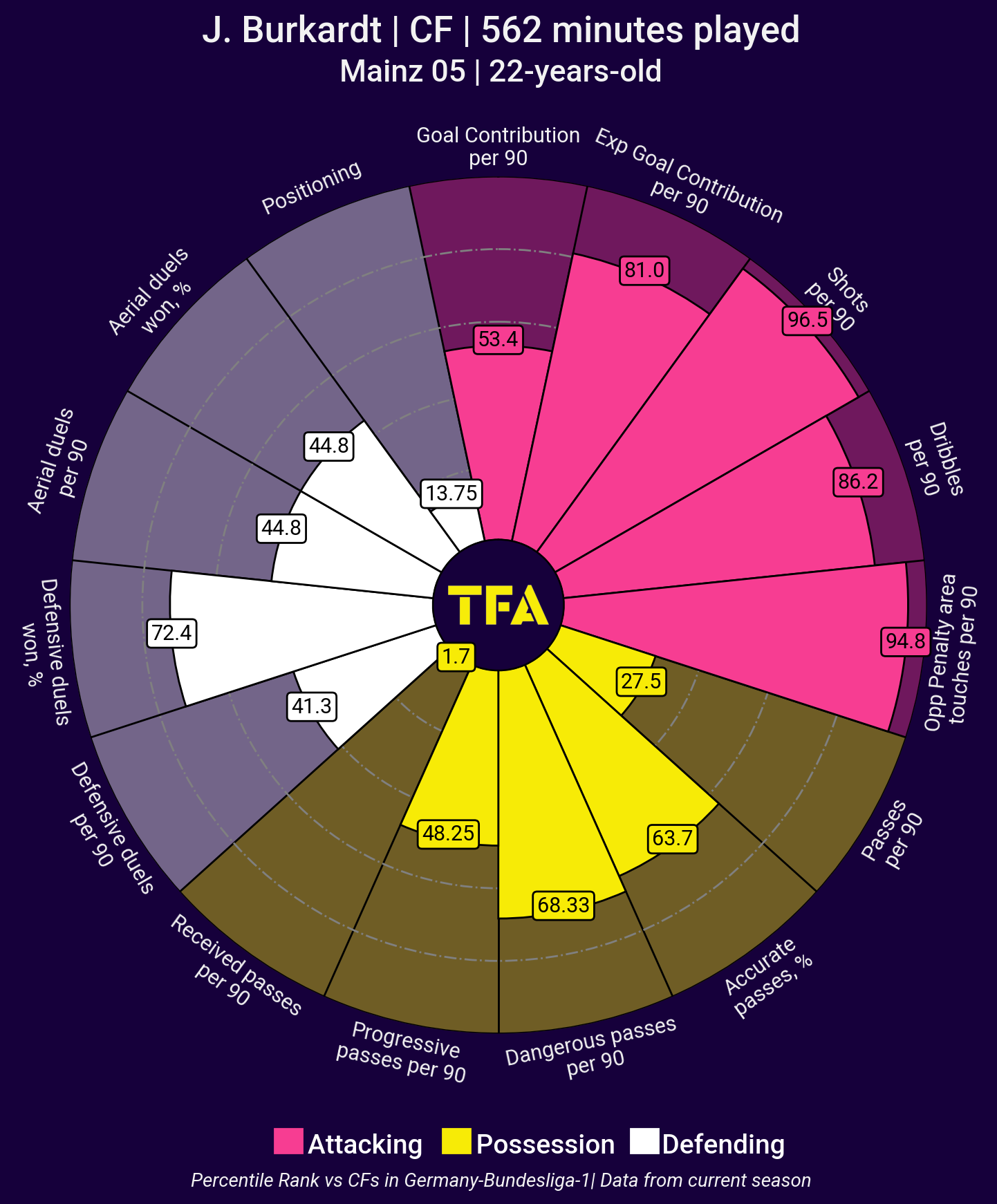 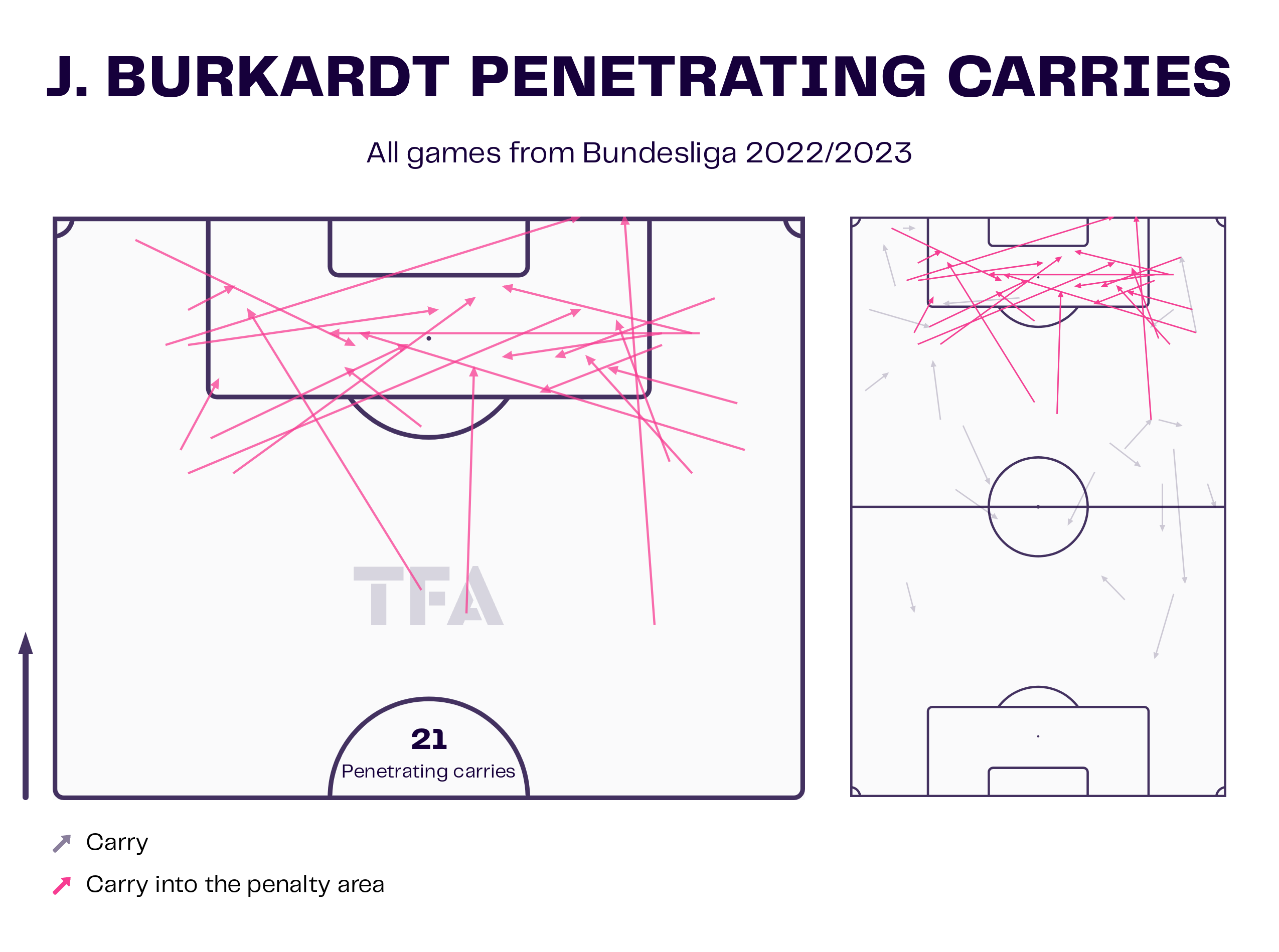 The above visual shows Jonathan Burkardt’s penetrating carries from the current season of the Bundesliga. With an average of 5.28 dribbles per game, the youngster has made 21 penetrating carries this season. He also has a success rate of 63.2% for dribbles. He is ranked very highly for dribbles per game and we can see why. Also, from observing the map, we can understand that he can dribble the ball for long distances. He has done almost everything right apart from finishing. 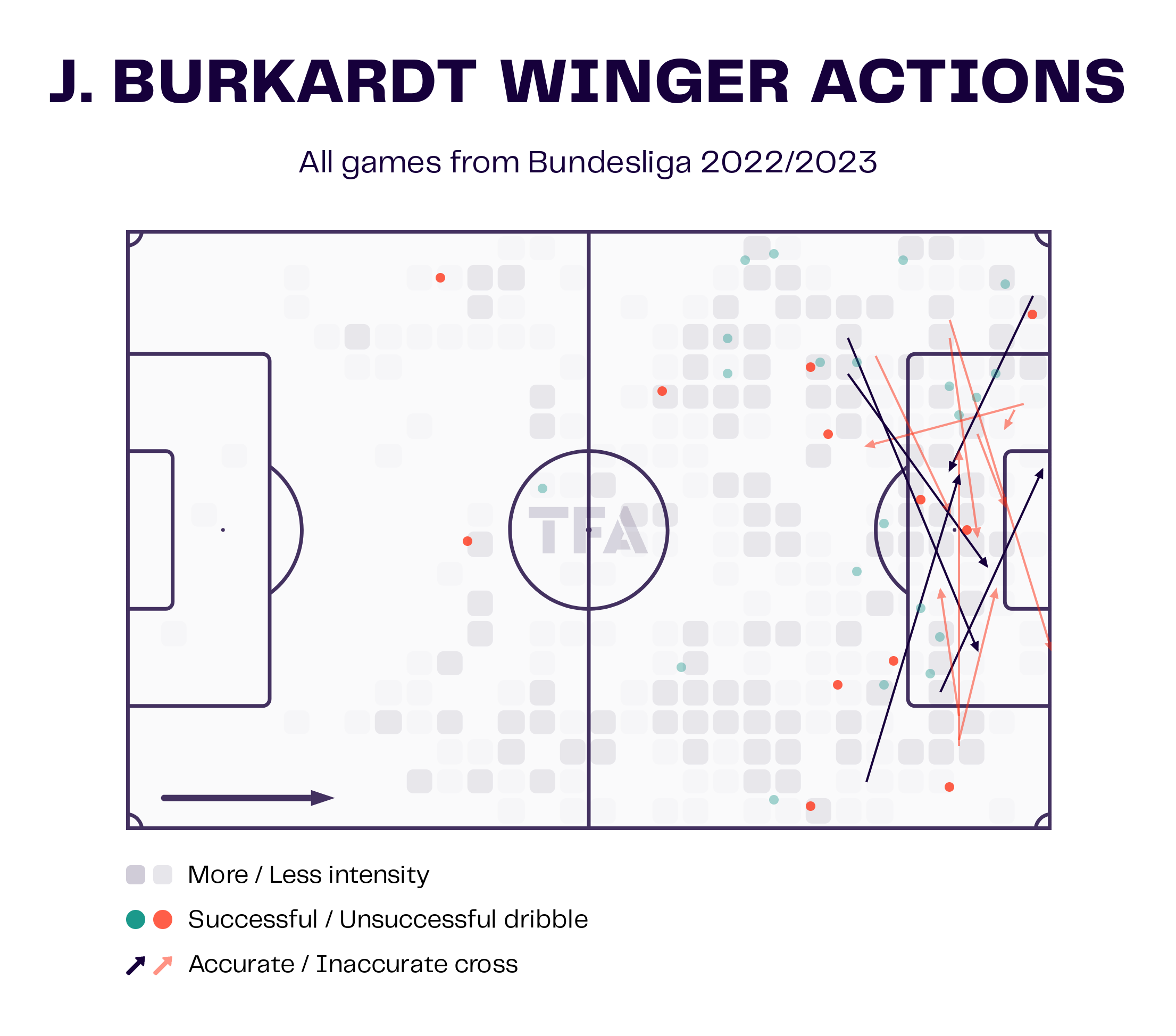 Apart from playing as a centre-forward, Burkardt can play as a winger too. When he plays on the wing, he uses his pace and ball-carrying ability to go past players and create attacking threats. The young German contests around 13.13 offensive duels per game with a win percentage of 39. This figure has risen from last season’s 11.19 with 31.6% success, which shows an increase in both efficiency and confidence. Burkardt also plays an average of 2.4 crosses per game, a figure that has doubled from last season’s 1.18 crosses per game. 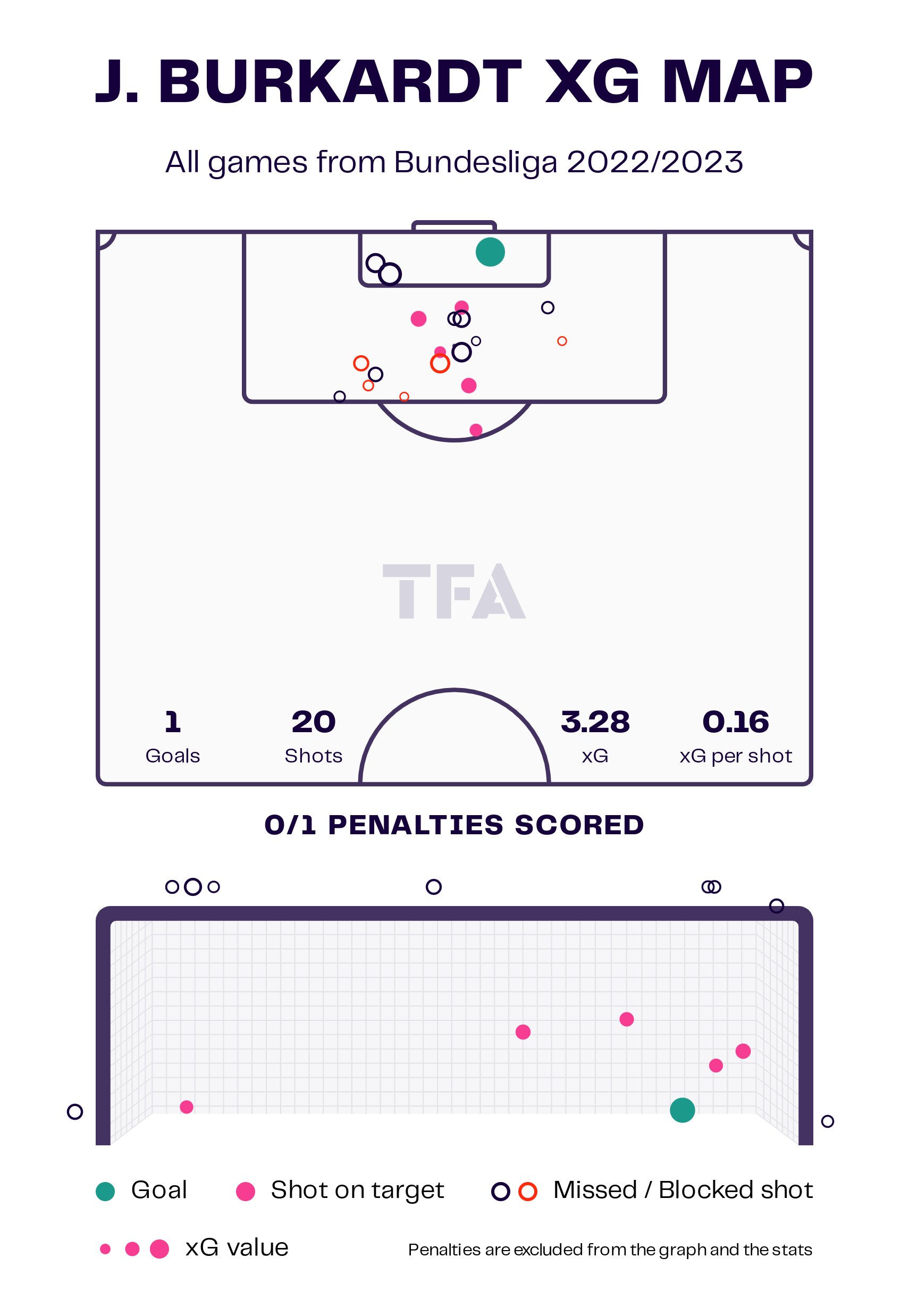 The most concerning thing for Jonathan Burkardt is how goals have eluded him this season. With 11 goals from 34 games, he set a standard for himself last season. A standard he has failed to match this season in terms of goals. Burkardt has only one goal in 20 attempts. Out of the 20 shots he attempted, six were on target, and he had an xG of 3.28. He has averaged 3.36 shots per 90 minutes with a 33.3% accuracy. 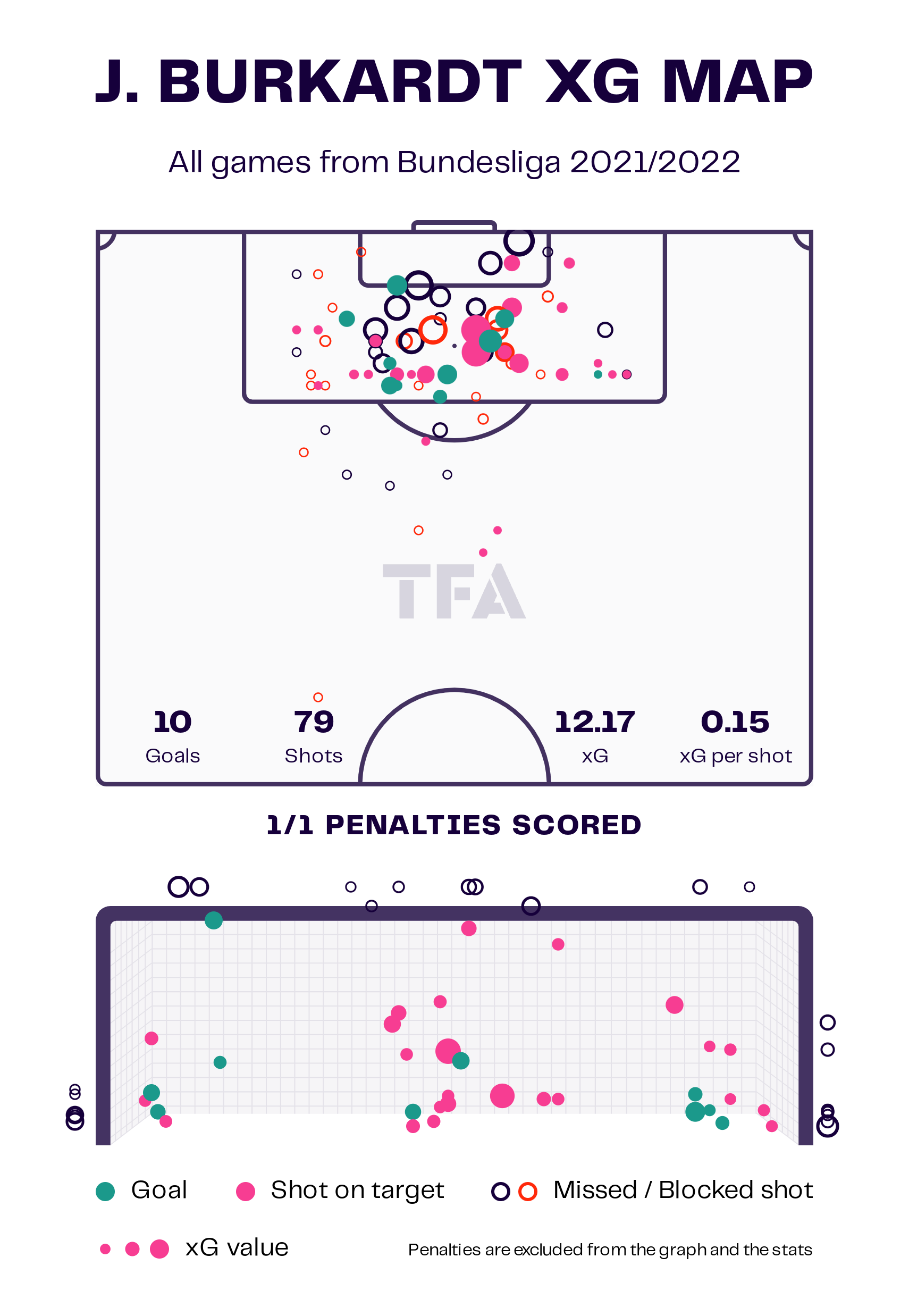 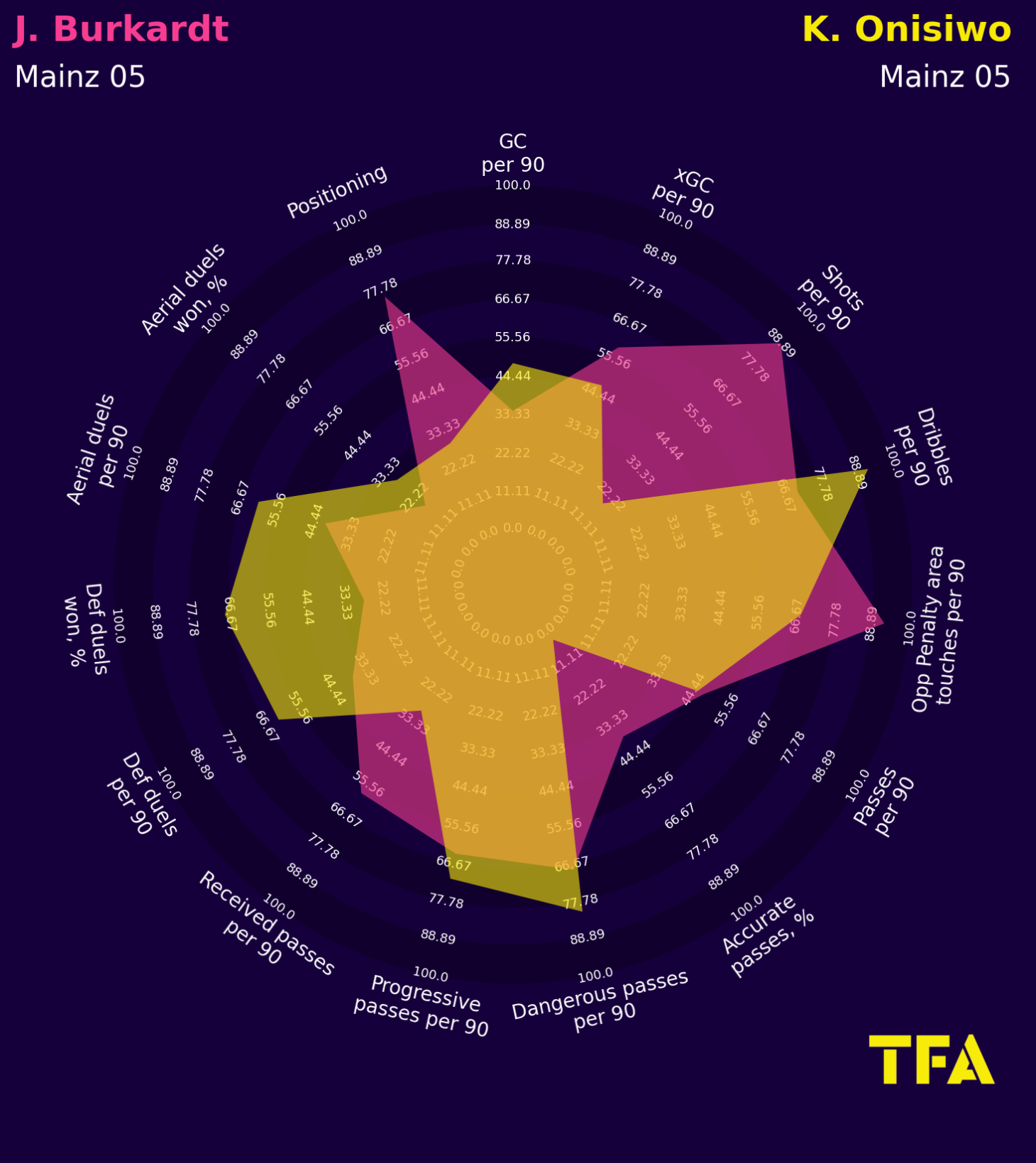 The above visual compares the radars of Jonathan Burkardt and his teammate Karim Onisiwo. The duo was a big hit for Mainz last season, with Onisiwo registering eight assists and Burkardt scoring 11 goals. Burkardt has better stats this season than Onisiwo in shots, touches in the opponent’s penalty area, passing accuracy, and positioning. Meanwhile, Onisiwo has better stats in goal contributions per 90, dribbles, defensive, and aerial duels.

With Jonathan Burkardt failing to find goals for Mainz, the market odds are expected to shift slightly. Looking at the 1×2 market, the odds for Mainz could go slightly high as he has created chances but failed to convert them. As for the over/under line market, under lines are supposed to thrive until he gets his scoring form back.

Jonathan Burkardt took things to a new level last season when he scored 11 goals and assisted three more. However, things have not gone according to plan for the youngster in the first half of the season. Burkardt, who is still only 22, has plenty of time to establish himself for both his club and his country. But the player and the coach will be hoping that he can find his scoring form once again.

Under the microscope: Why Hoffenheim’s recent record is dangerous for themselves

Kimmich is awe of both the goalscorers before the heavyweight clash

Under the microscope: How Mitchell Weiser is finally booming at Werder...