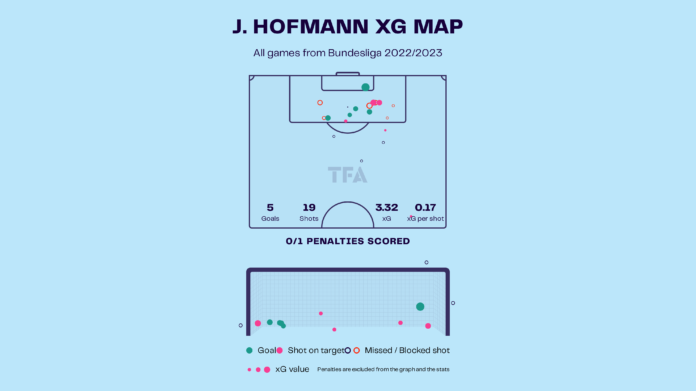 Borussia Monchengladbach have had a good start to their Bundesliga season and is in eighth place with 22 points from 15 matches. One of the players that has maintained his form from last season is midfielder Jonas Hofmann. The 30-year-old German midfielder has scored five goals and assisted four more this season. His performances earned him a place on the national team for the World Cup as well. His accurate crosses, passes, and ability to score goals have been crucial for Monchengladbach. Therefore, we look at some of his stats to understand why he will be important in determining Borussia Monchengladbach’s fate in the Bundesliga.

Jonas Hofmann has made 13 appearances this season, starting all of the matches. In 13 appearances, he has five goals and four assists. 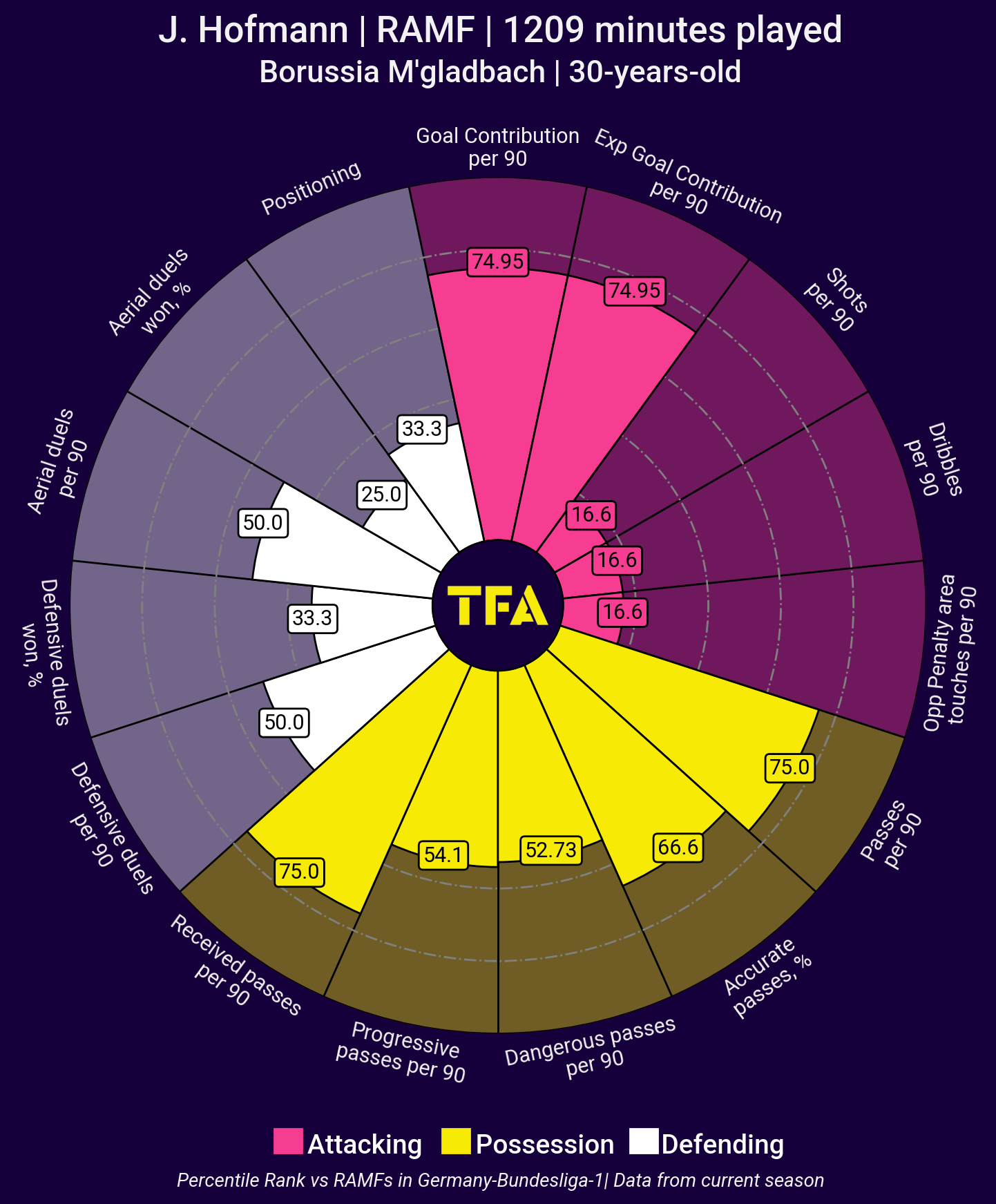 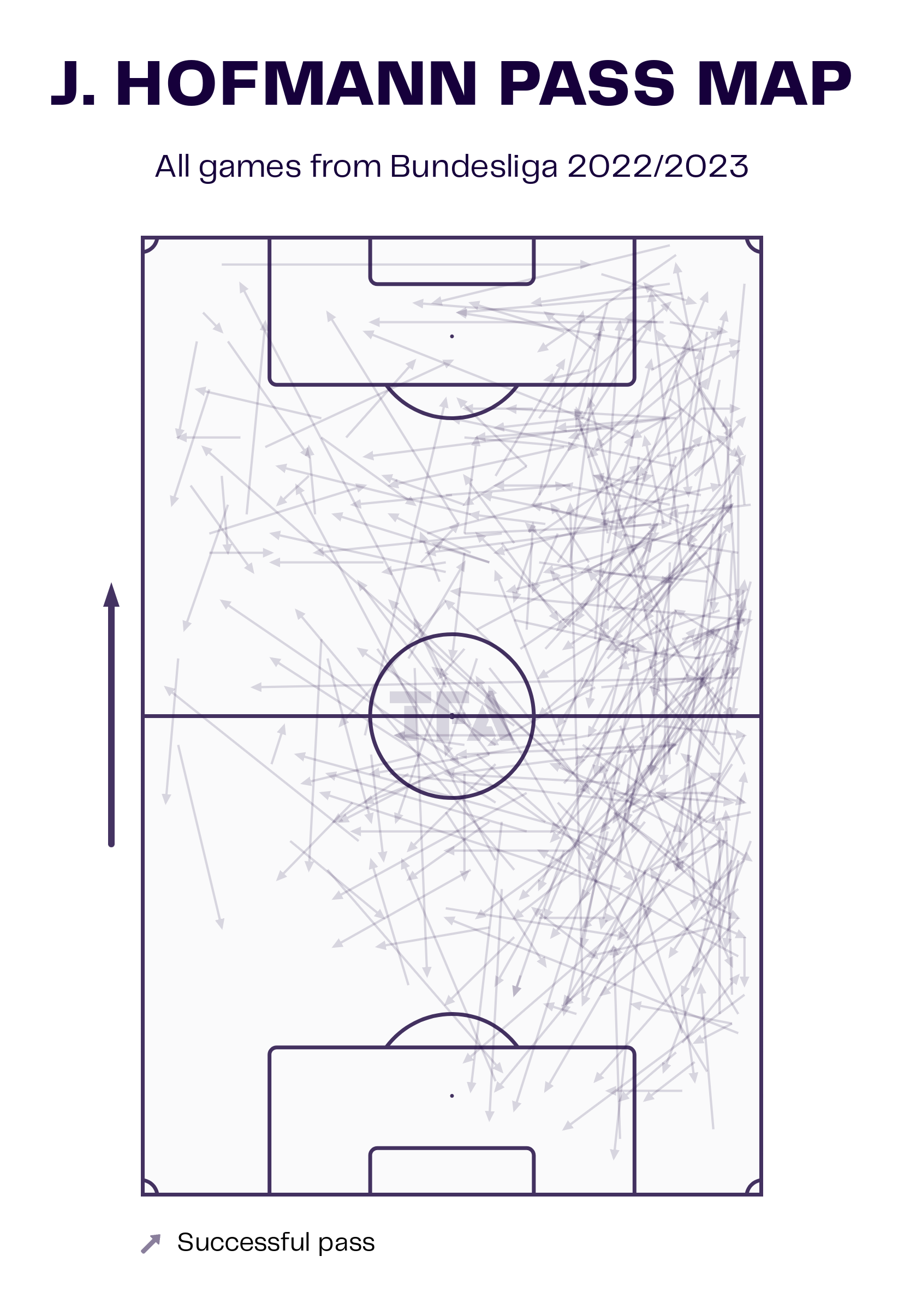 Passing is one of Hofmann’s strongest suits. The above visual shows the pass map of Jonas Hofmann from the current Bundesliga season. He has a passing accuracy of 79.7% and makes around 34 passes per 90 minutes. As we can observe from the visual, Hofmann can play some long passes and has an accuracy of 56.5% for the same. Moreover, the 30-year-old makes around 3.28 passes into the final third with a success rate of 63.6%. The midfielder also plays around 2.31 passes into the penalty box with a success rate of 58.1%. 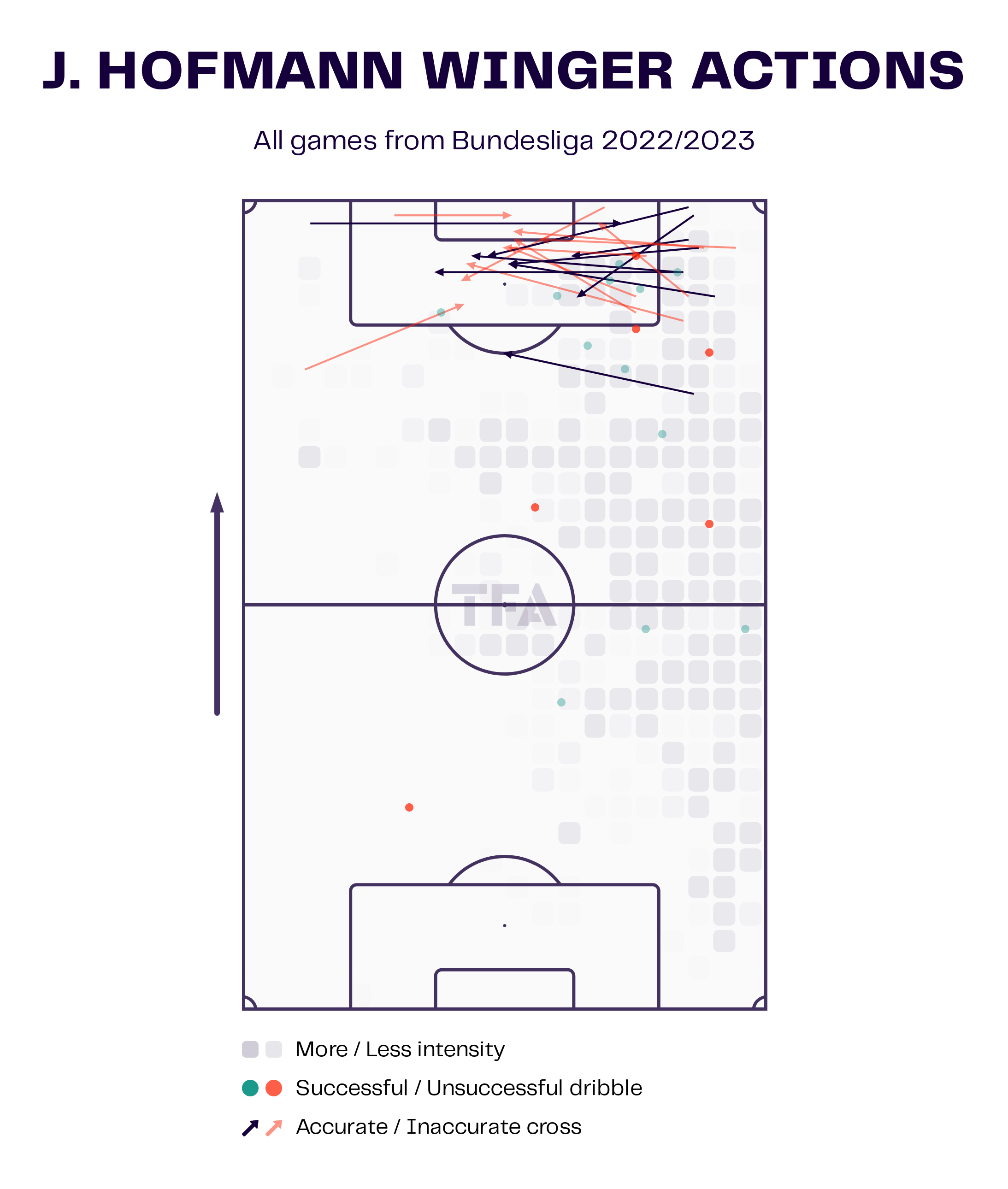 Although a midfielder, Jonas Hofmann can also play as a winger. He sometimes occupies the right-wing position and plays some delightful crosses. With tall players like Marcus Thuram on their team, these crosses can be dangerous and pose a threat. Hofmann averages 1.94 crosses per game with a 34.6% success rate. He also gets involved in around 5.21 offensive duels per game, winning 38.6% of them. The 30-year-old sometimes takes on players and makes an average of 1.34 dribbles per game. 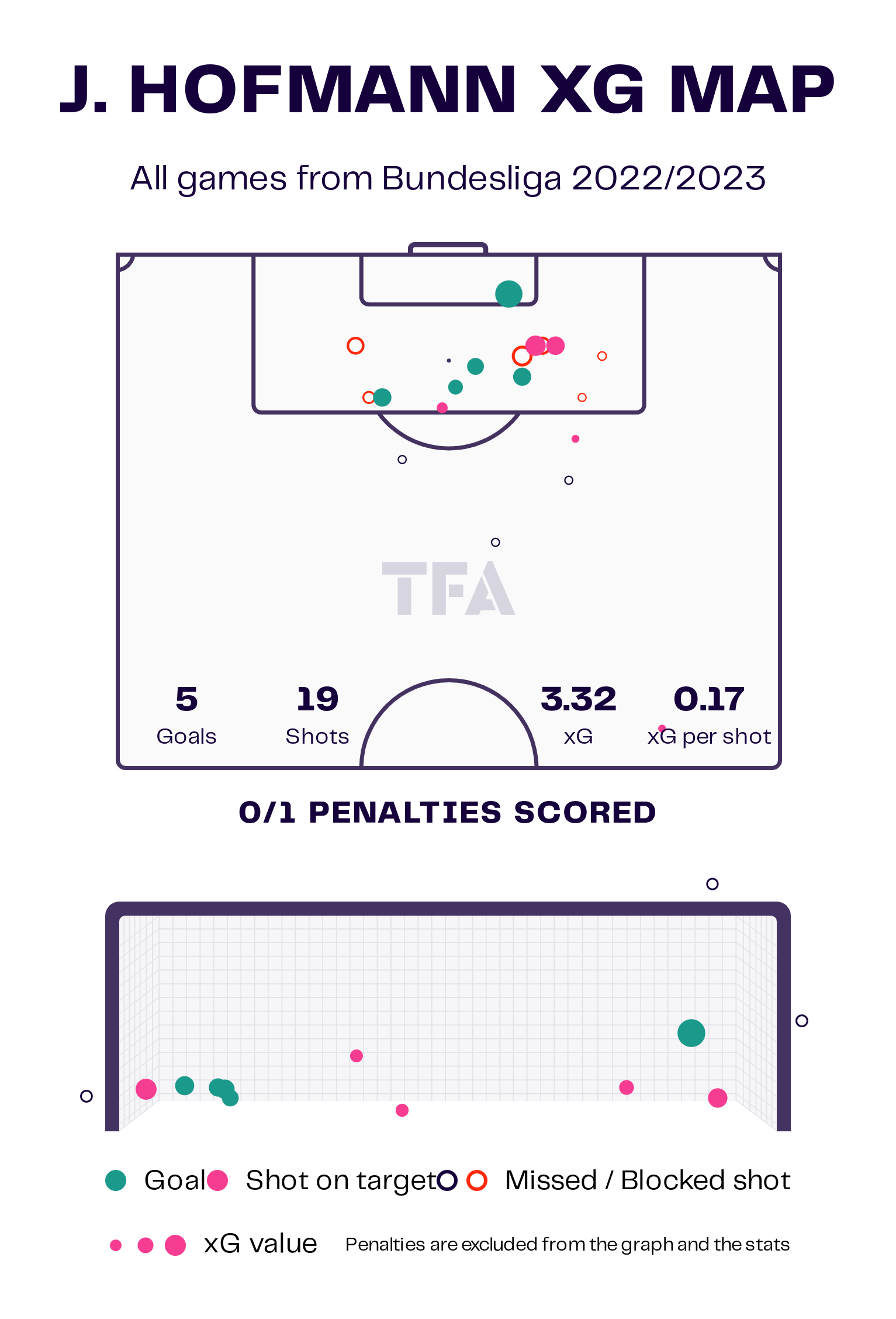 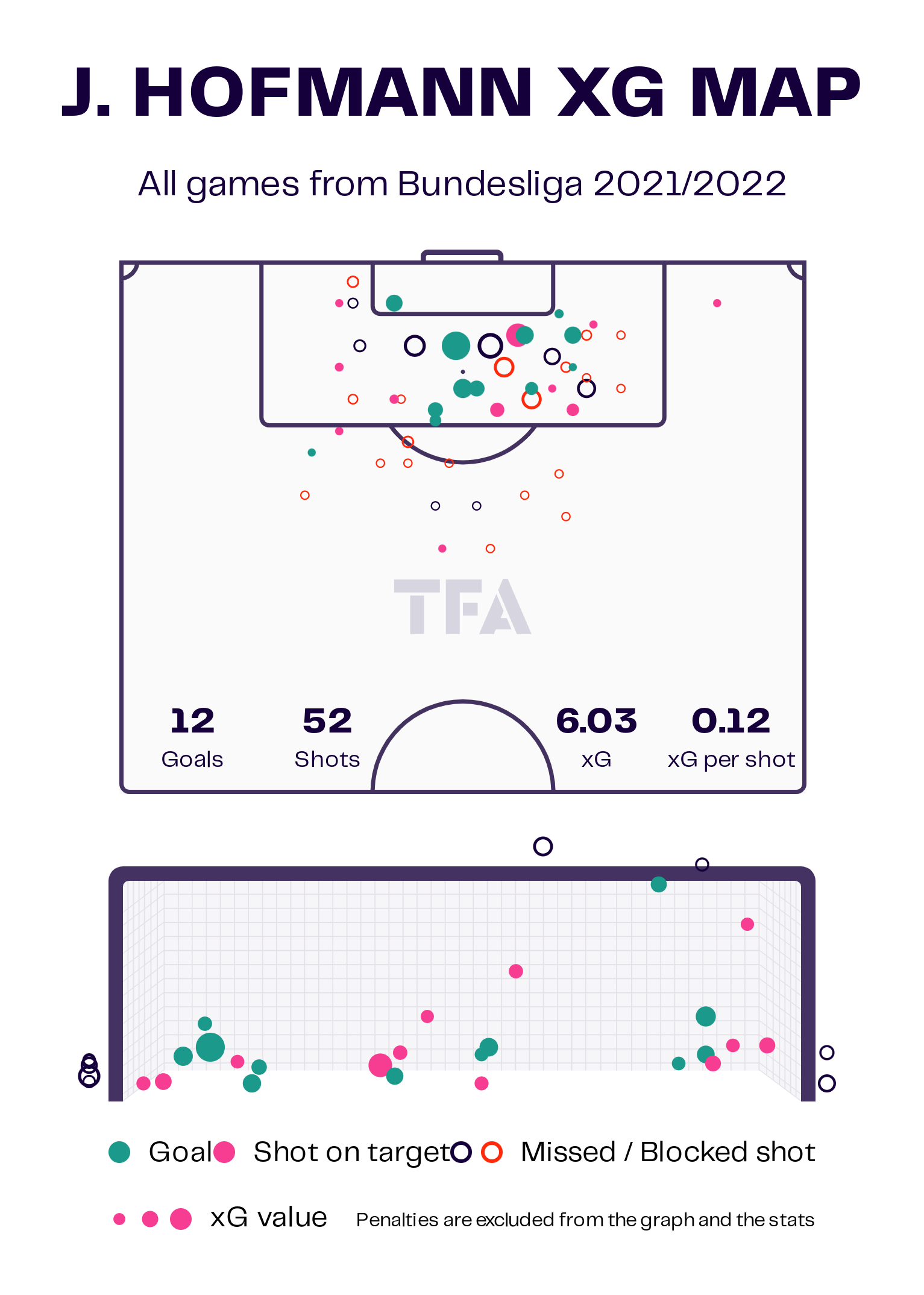 The two visuals above show the xG map of Jonas Hofmann from the current season and the previous season. He has scored five goals this season on 19 shots. Out of the 19 shots, 10 were on target for an average of 1.49 shots per game with 55% accuracy. This figure has seen a decline from last season’s 2.12 shots per game with 46.2% accuracy. Last season, Hofmann attempted a total of 52 shots, with 24 on target. He had 12 goals last season and has already reached half the tally by the halfway mark of this season. 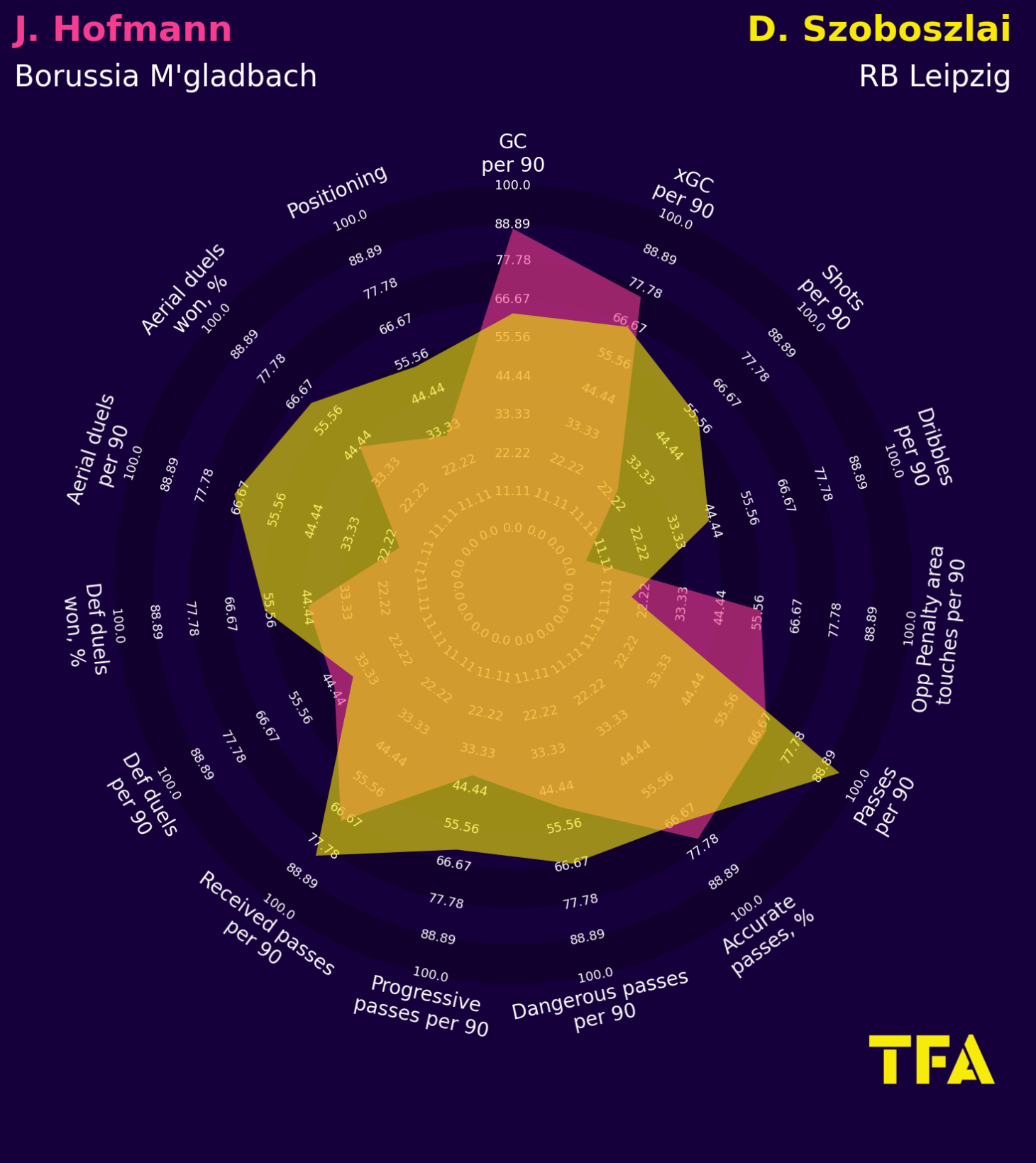 The above visual compares the radars of Jonas Hofmann with those of Dominik Szoboszlai. Both play either as attacking midfielders or wingers and are having a good season. We can see from the visual that Szoboszlai has better stats in almost all the parameters. He leads in dangerous passes, aerial duels, positioning, shots, and dribbles per game, while Hofmann has better stats for passing accuracy, entry into the opposition penalty area, goal contributions per 90, and defensive duels. Both players have also contributed to their respective sides with assists and goals.

Jonas Hofmann has had an impressive season in the Bundesliga. His performance in the domestic league even earned him a spot in the World Cup squad for Germany in Qatar, where he came on as a substitute in two matches. He will need to keep his performance up, as he is an important player for Borussia Monchengladbach.

Stats Pack: A draw for Uruguay in their home game against...

The Statistics: Wimmer salvages point for Arminia Bielefeld in draw with...

Under the microscope: Why the American youngster needs to produce more...