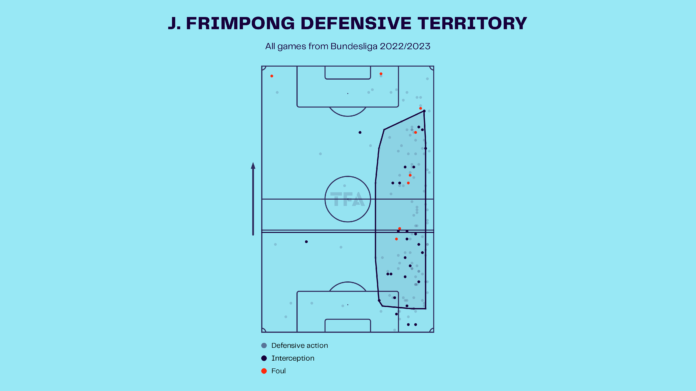 After a terrible start to the season, Bayer Leverkusen has somewhat recovered under their new coach, Xabi Alonso. They were winless when the Spanish veteran took over. He has ever since managed to change the fortune in their favour with five wins, one draw, and one loss from seven matches. One of the shifts that he brought was a change in formation that allowed the likes of Jeremie Frimpong to go forward with greater freedom.

The Dutch international, who is having a stellar season at Leverkusen, has five goals and one assist to his name in the Bundesliga. The 21-year-old’s contribution has helped Leverkusen climb to the 12th position from the 19th position. We look at some stats to understand the importance of Jeremie Frimpong for Bayer Leverkusen.

Jeremie Frimpong has made 15 appearances this season, starting 14 matches. He has five goals and one assist to his name in the Bundesliga. The youngster has two more assists in the UEFA Champions League as well. 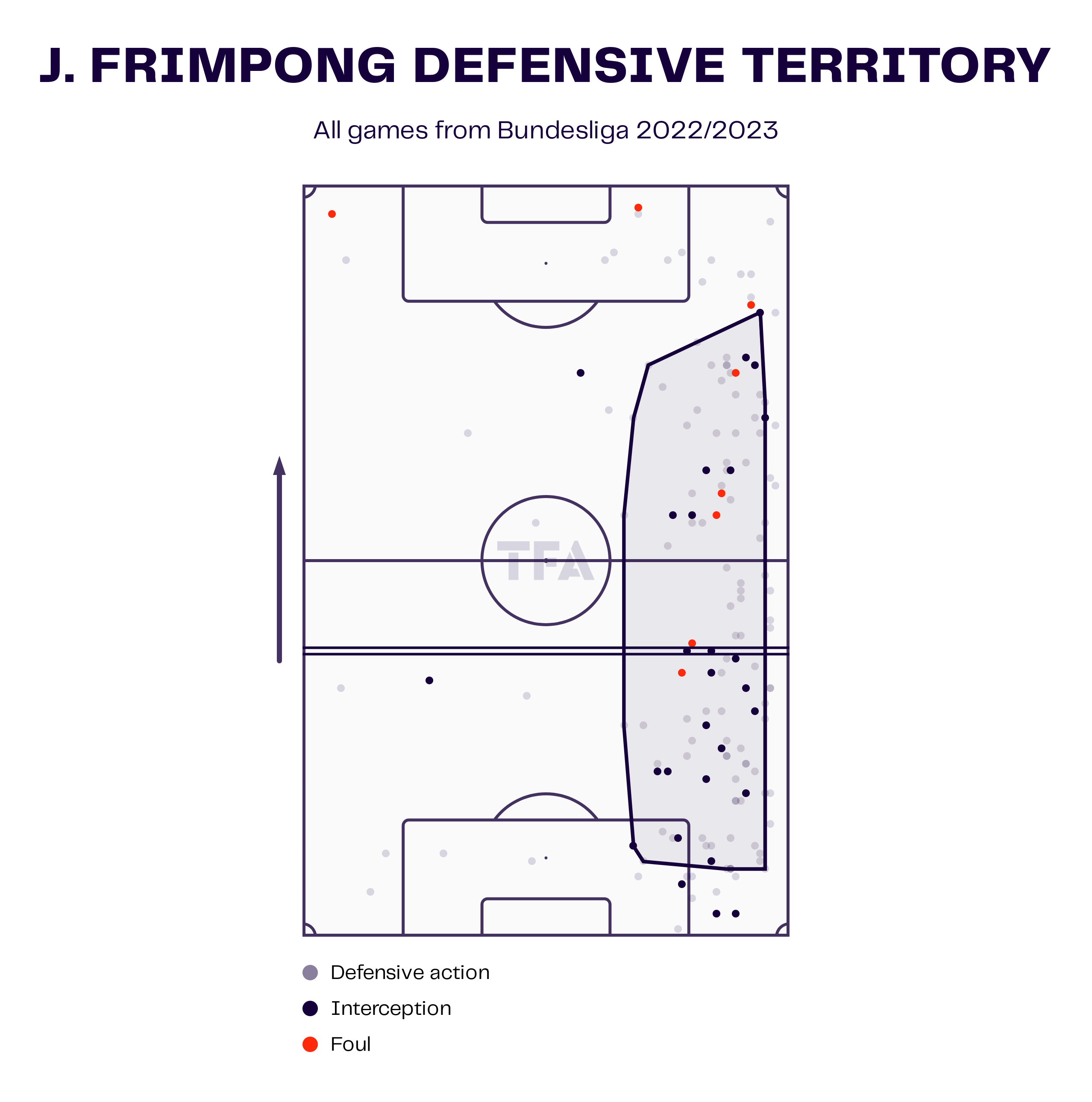 Playing with a three-man backline has allowed the wing-backs to stay further forward. The above visual shows Jeremie Frimpong’s defensive territory this season. We can observe that Frimpong, being a wing-back, stays much more forward than a traditional full-back. This allows him to keep the attack going and track back when required. This season, Frimpong has taken part in an average of 5.96 defensive duels with a success rate of 59.8% and 1.53 aerial duels with a 42.9% success rate. Moreover, he makes an average of 3.85 interceptions per game. We can observe from the visual that he has made some important interceptions in both the defensive and attacking third. 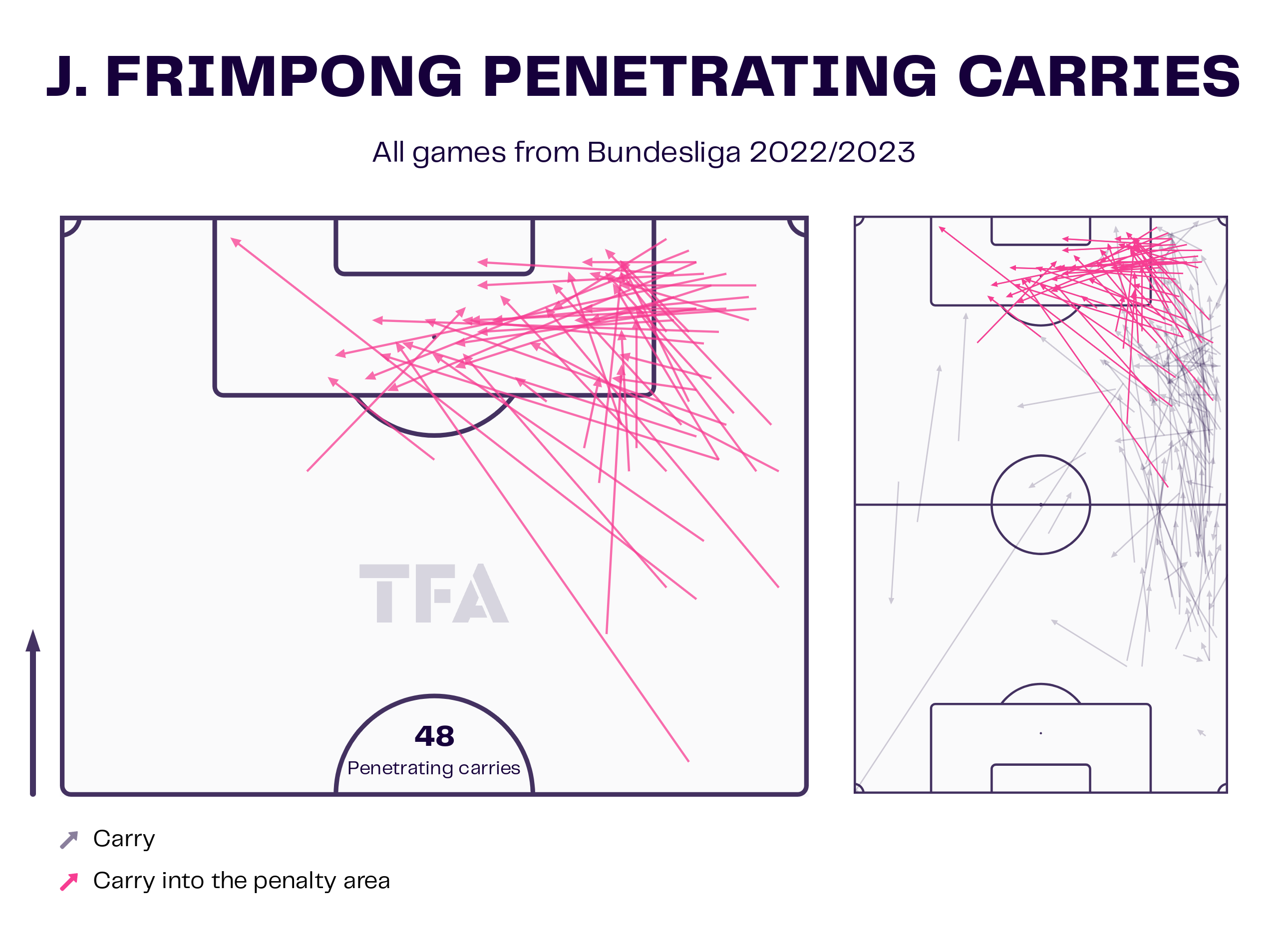 Another area where Frimpong has done extremely well is carrying the ball forward with him. He has made 48 penetrating carries this season with an average of 7.56 dribbles per game and a 54.8% success rate. We can observe from the visual that he likes to cut inside more than taking the ball wide and whipping in crosses. This has not only allowed the winger to stay wide but also allowed Frimpong to occupy goal-threatening positions. He has an average of 2.91 touches in the penalty area, which is good for a wing-back. 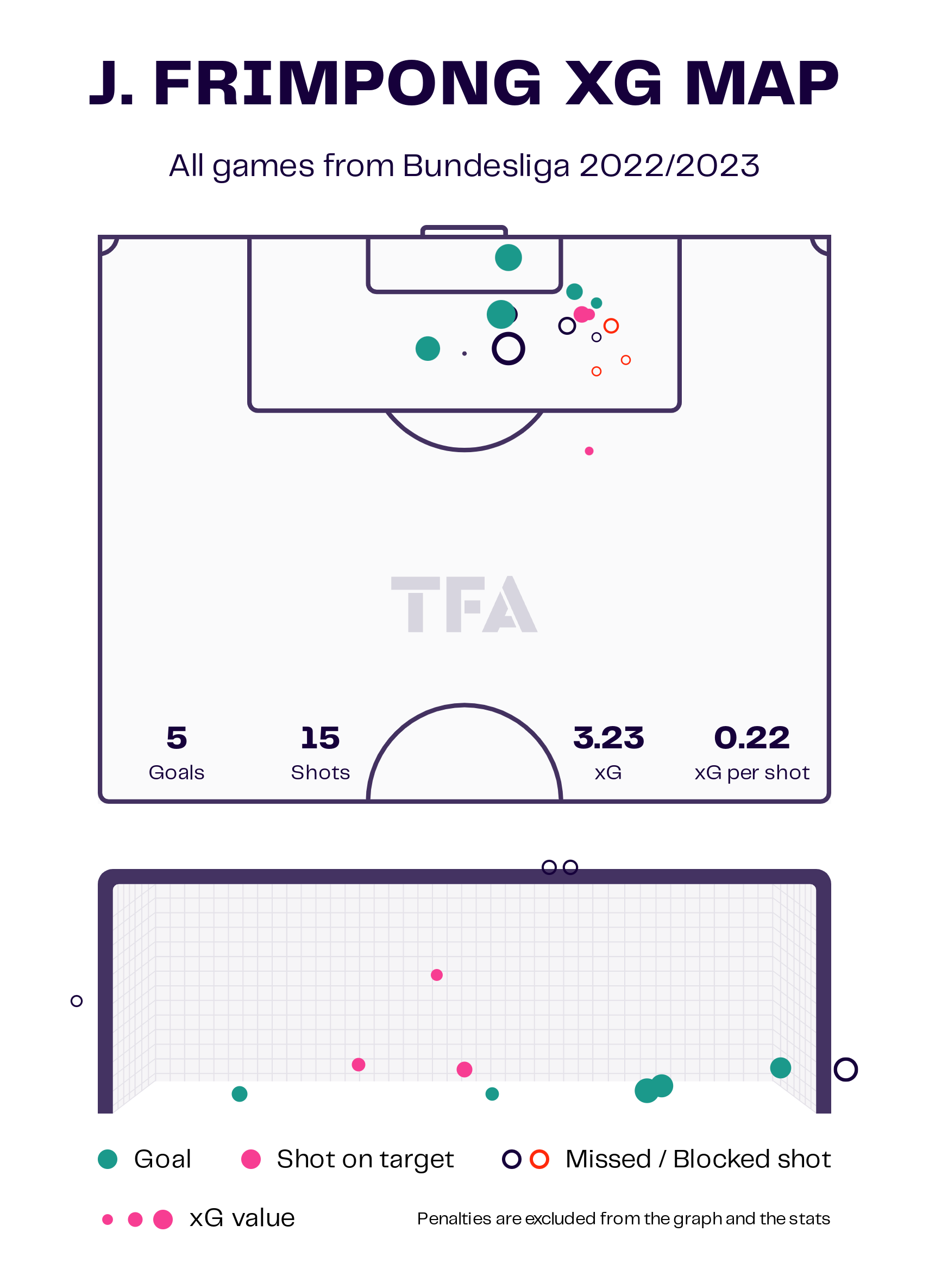 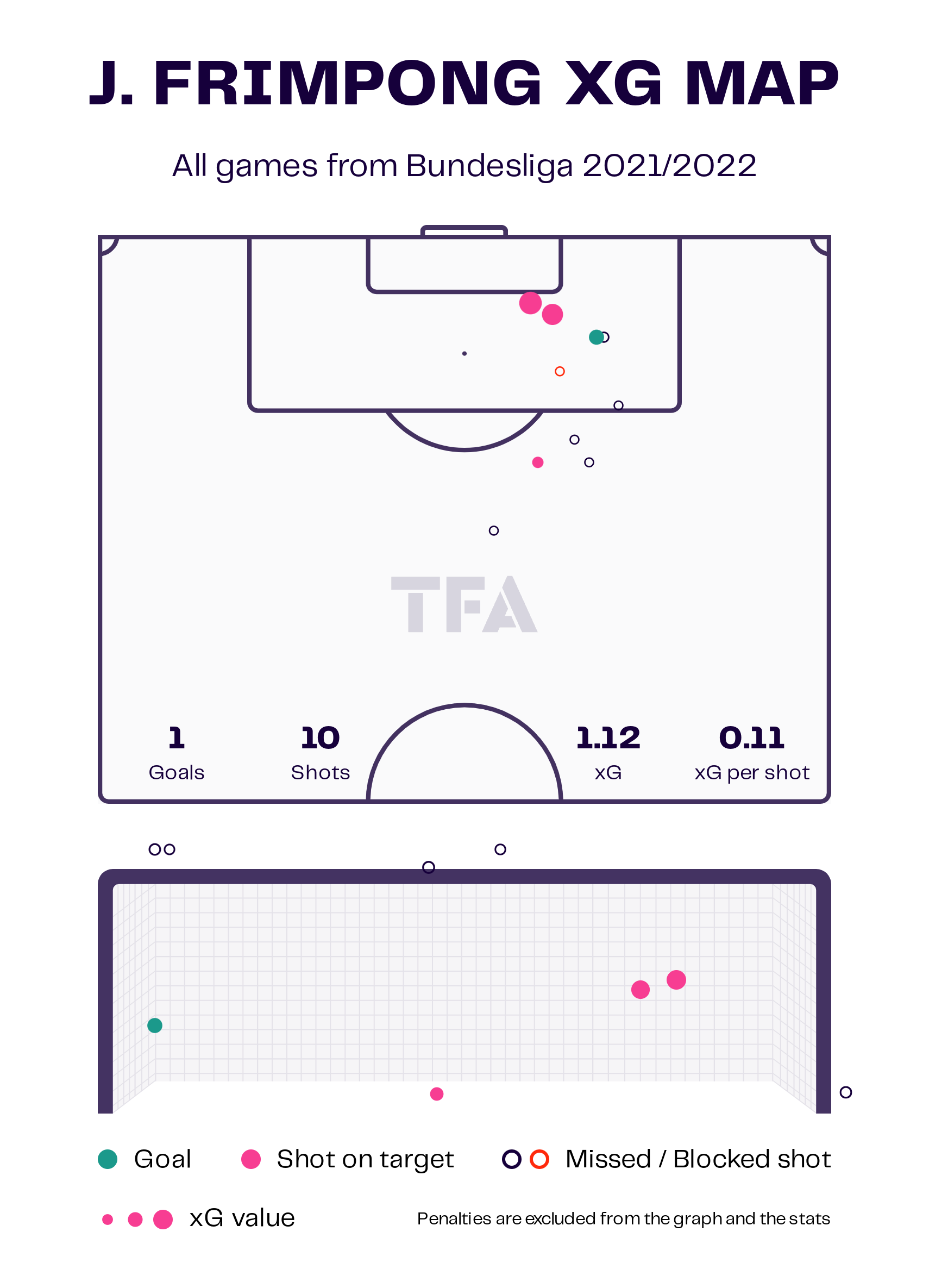 The two visuals above show the difference in Frimpong’s goal contributions from this season to last season. While he only had one goal the entire last season, Frimpong has five goals already in the Bundesliga. That is not the only thing he has improved on. His central positioning has allowed him to take more shots with a greater xG per shot. The 21-year-old has taken 15 shots this season with an xG rate of 0.22 per shot. This is an improvement from the 10 shots last season, with an xG rate of 0.11 per shot. Moreover, Frimpong has managed to exceed his xG rate, showing how good he has been. 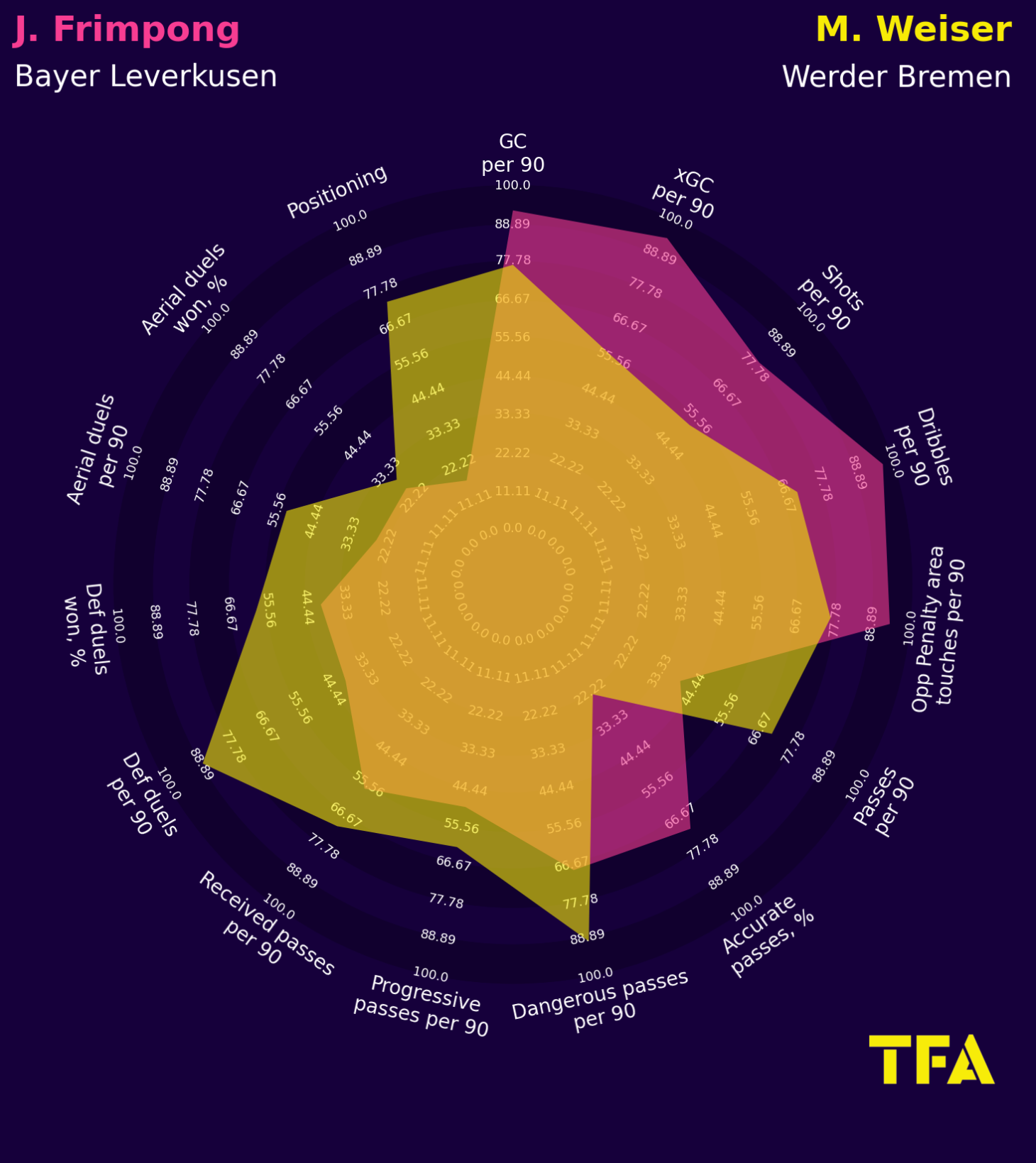 The above visual compares the radars of Jeremie Frimpong and Mitchell Weiser of Werder Bremen. Both are right-wing-backs and are having a great season. They both have contributed toward the goal and have been good defensively as well. Frimpong has better stats going forward, with him leading in accurate passes, entry into the opposition penalty area, dribbles, shots, and goal contributions per game. Weiser, on the other hand, has done better defensively. He has better stats in duels, positioning, passes per game, and dangerous passes per game.

Jeremie Frimpong has been a stable right-wing-back for Leverkusen and has contributed well to their recovery. His two goals in Xabi Alonso’s debut match as their coach allowed them to seal the game 4-0. He has had a great start to the season and will be hoping to continue the same form when the Bundesliga restarts in January.

Stats Pack: No goals in game between Mainz and Freiburg