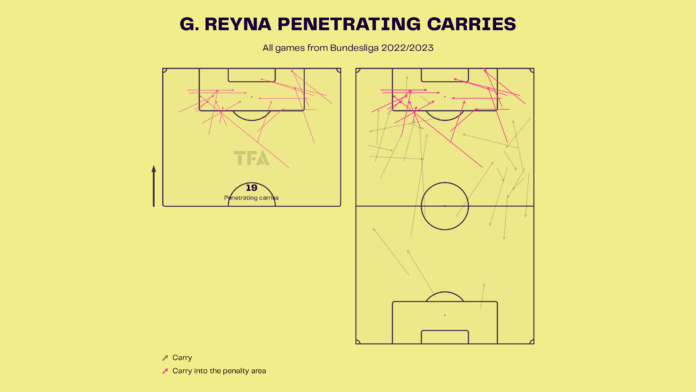 Borussia Dortmund have always nurtured young, talented players. They have a long list of players who have gone on to become great players in the future. One such name that was deemed to be a one-of-a-kind talent is Dortmund’s American midfielder, Giovanni Reyna. The 20-year-old joined Dortmund’s youth team in 2019 to play in the Under-19 Bundesliga. He was promoted immediately to the first team but has failed to live up to expectations. Reyna has eight goals and seven assists for Borussia Dortmund in four seasons. With rumours linking their star midfielder Jude Bellingham to a move away from the yellow and black army, his role has grown even more important. Therefore, we look at his stats to understand why the American youngster needs to produce more results for Borussia Dortmund.

Giovanni Reyna has played ten matches this season, starting in just three matches and coming on as a substitute in seven. He has scored two goals in the Bundesliga this season. Reyna has two assists to his name in the Champions League as well. 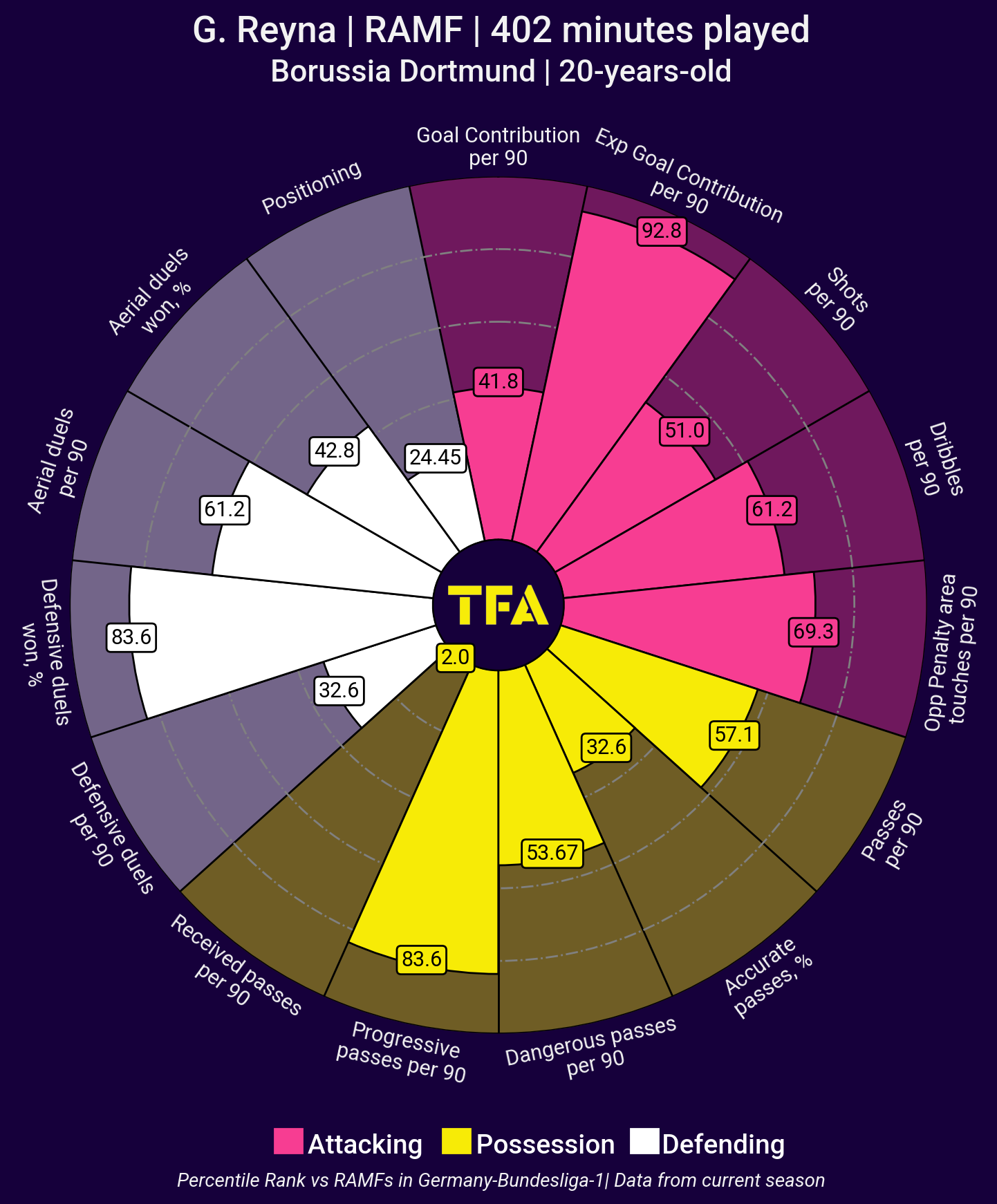 The above visual shows the percentile rank of Giovanni Reyna compared to other right-attacking midfielders in the Bundesliga. The youngster is ranked in the top 92.8 percentile for expected goal contributions per game and has decent stats for other attacking parameters. He has decent stats for dribbles and entries into the opposition’s penalty area per game. Reyna is also ranked highly for progressive passes per game and has decent passing stats as well. Another area where the USMNT midfielder has done well is in winning defensive duels, where he is ranked in the top 83.6 percentile. 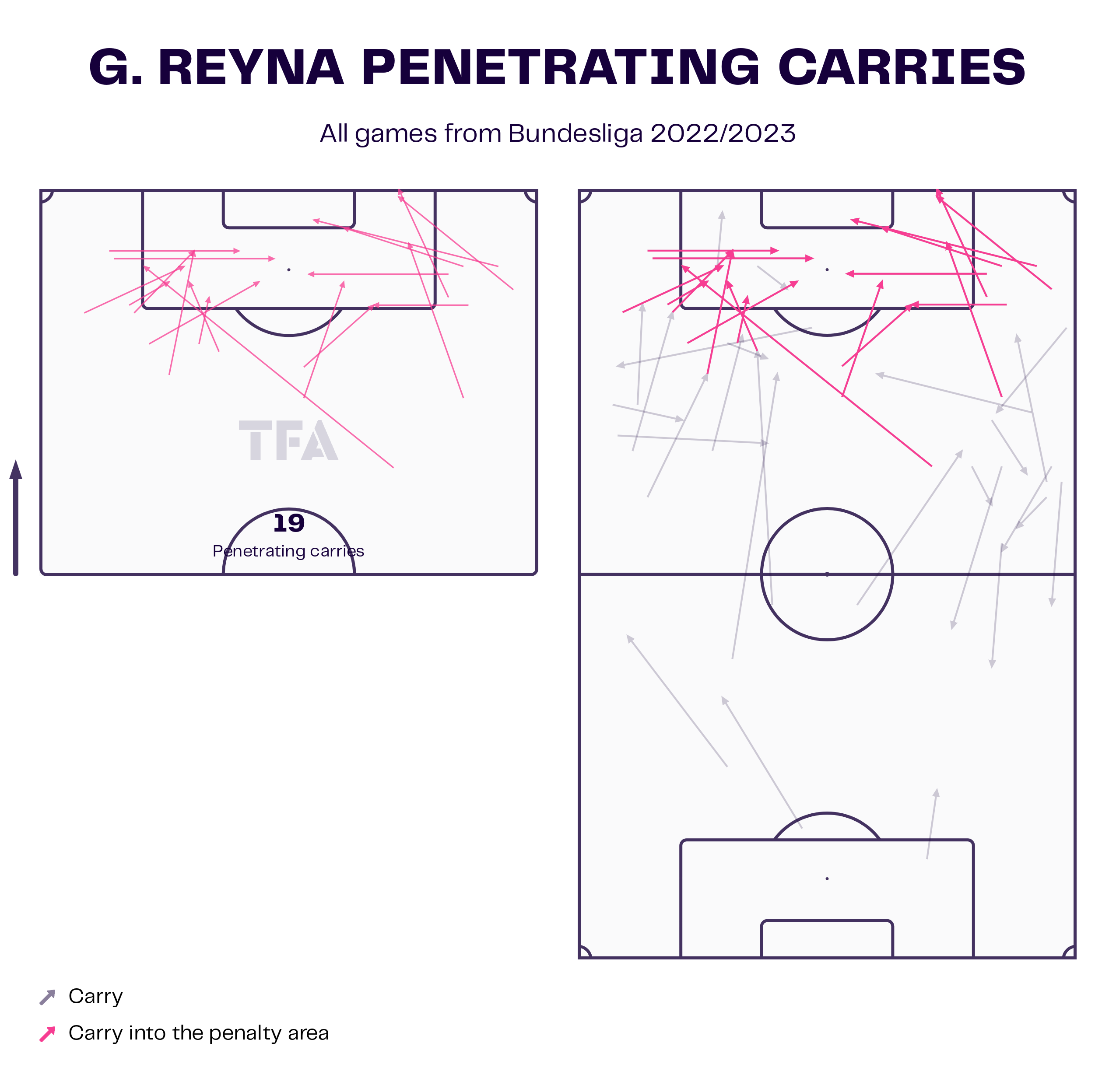 With an average of 4.03 dribbles per game, Reyna can make some line-breaking runs. He has a success rate of 55.6% and is a natural dribbler. He has made 19 penetrating carries this season. He has improved his dribbling stats from last season. Reyna had an average of 3.65 dribbles per game with a success rate of 47.1%. The increase in the number of dribbles is a good sign, as it shows he is willing to take on more players and dribble more. The 20-year-old also makes around 2.46 progressive runs per game. 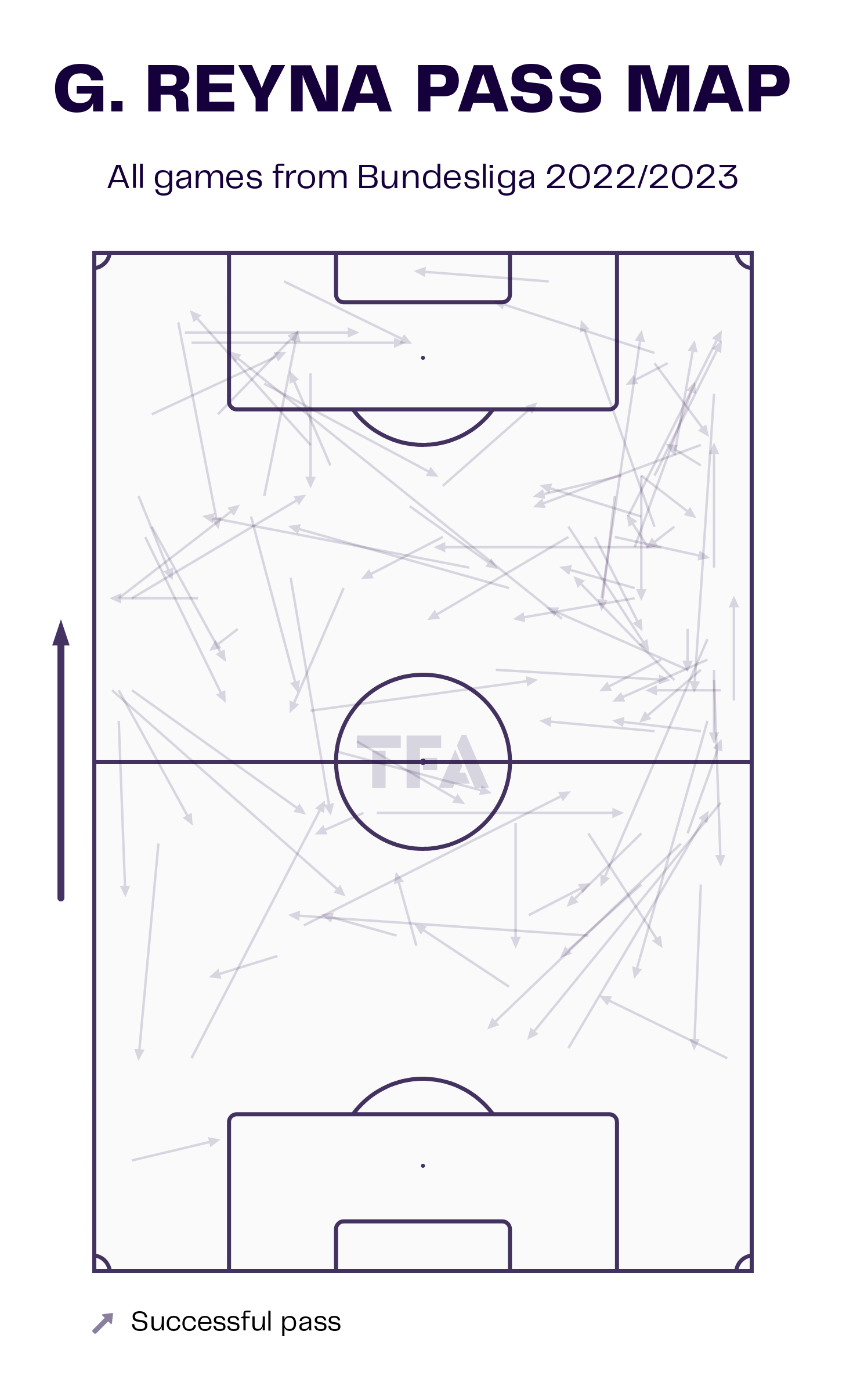 The above visual shows Gio Reyna’s pass map from the current Bundesliga season. With a passing accuracy of 74.4%, Reyna makes around 29.78 passes per game. He wanders around the field collecting and distributing passes, then plays 2.46 passes into the final third. Reyna has a passing accuracy of 45.5% in the final third. In addition, he also gets involved in the attack and plays an average of 3.36 passes into the penalty area with 66.7% success. 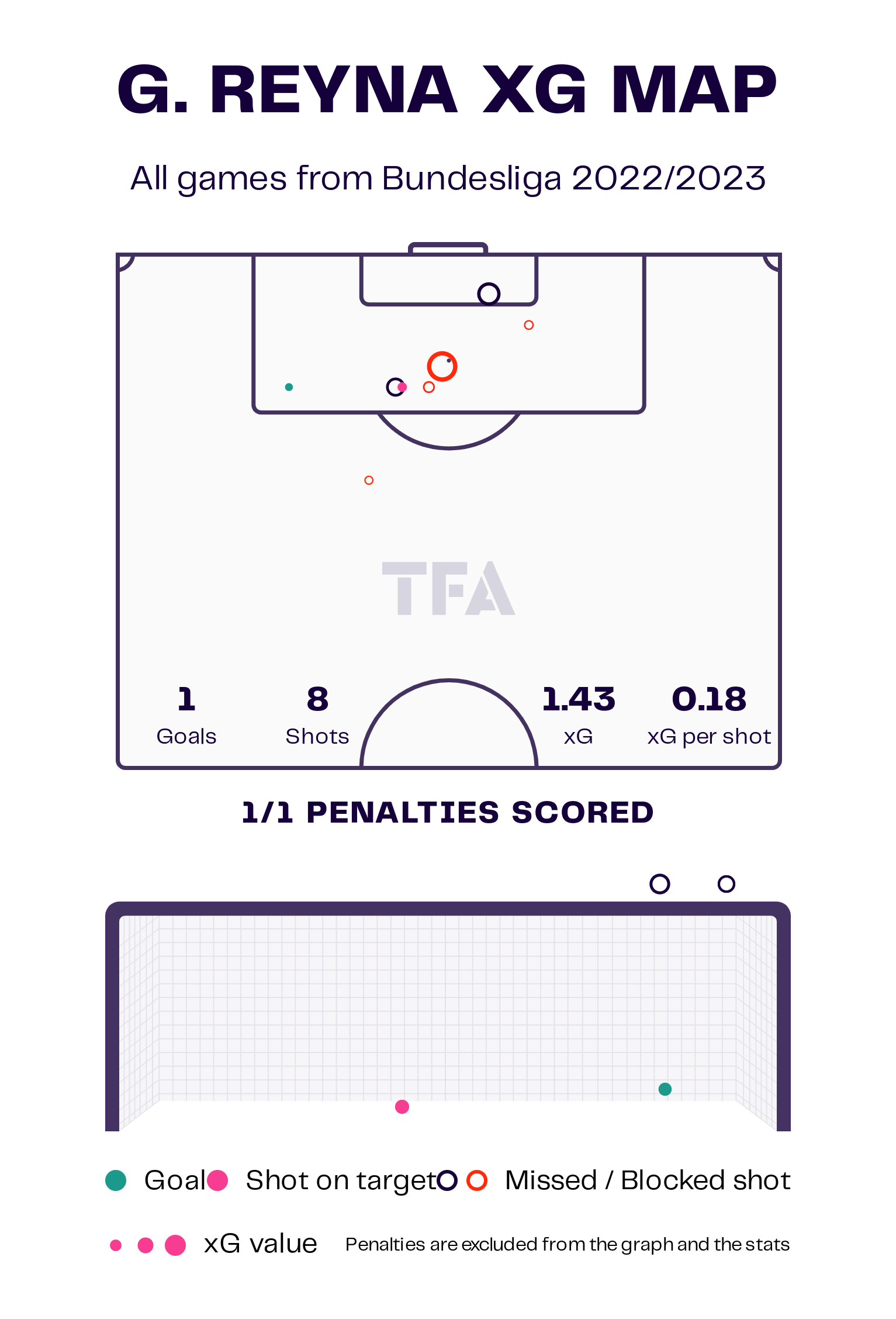 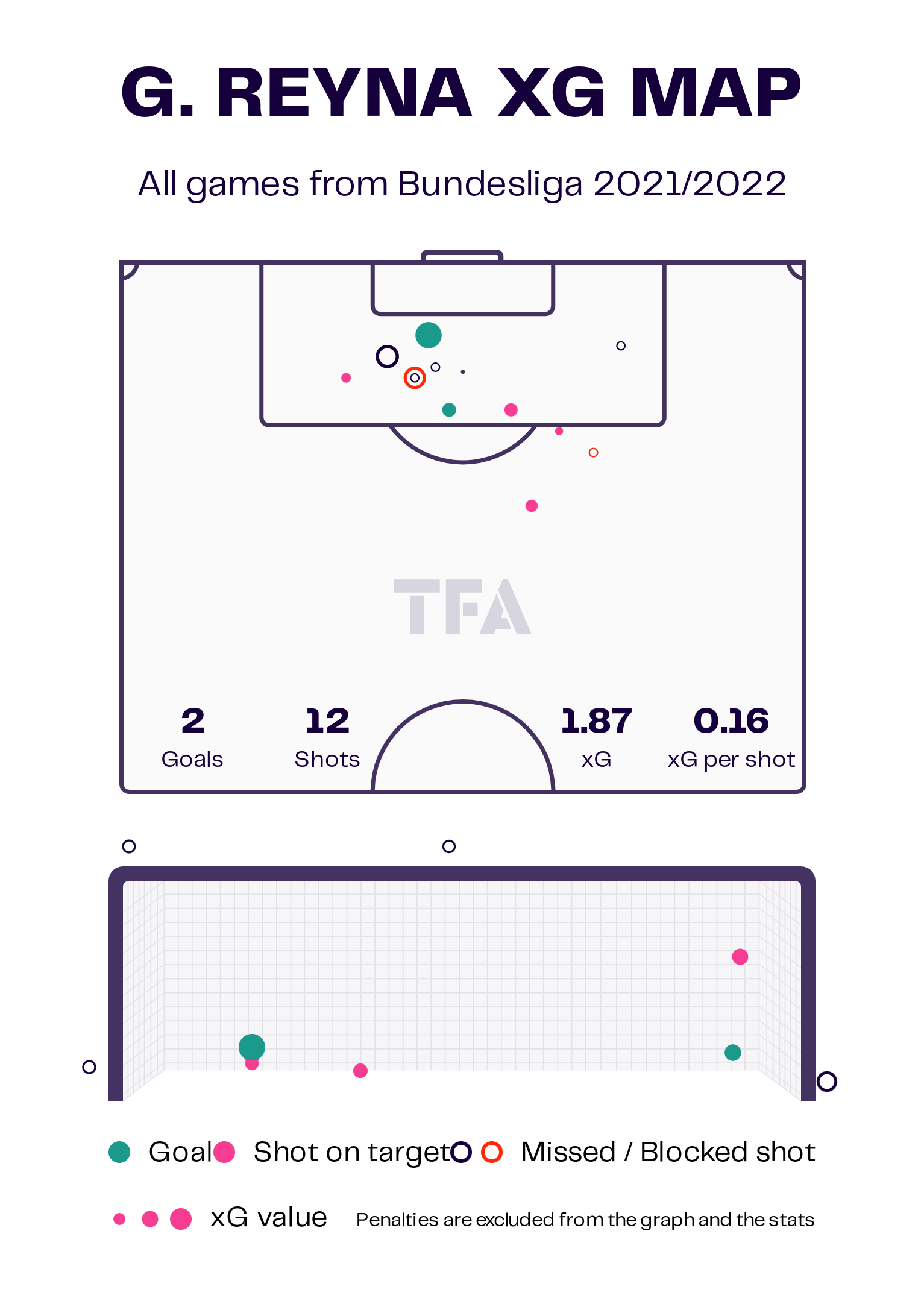 We live in an era where goals scored by midfielders are of great value and importance. Gio Reyna has struggled in that aspect. He has only scored eight goals in the four seasons he has spent with Dortmund. The two visuals above show his xG maps of Gio Reyna from the previous and current seasons.

Last season, he scored two goals on 12 shots. Out of the 12, five were on target, and he averaged 2.3 shots per game with a success rate of 50%. He only played ten matches last season.

He has already matched his goal total from last season and scored two goals this season. He has scored one goal from open play and one from a spot kick. This season, the 20-year-old has attempted eight shots, only two of which have been successful. The average number of shots per game has also come down to 2.01, with a success rate of 33.3%. Dortmund fans will be hoping he can increase his scoring output.

Can Reyna match the standard Bellingham has set? 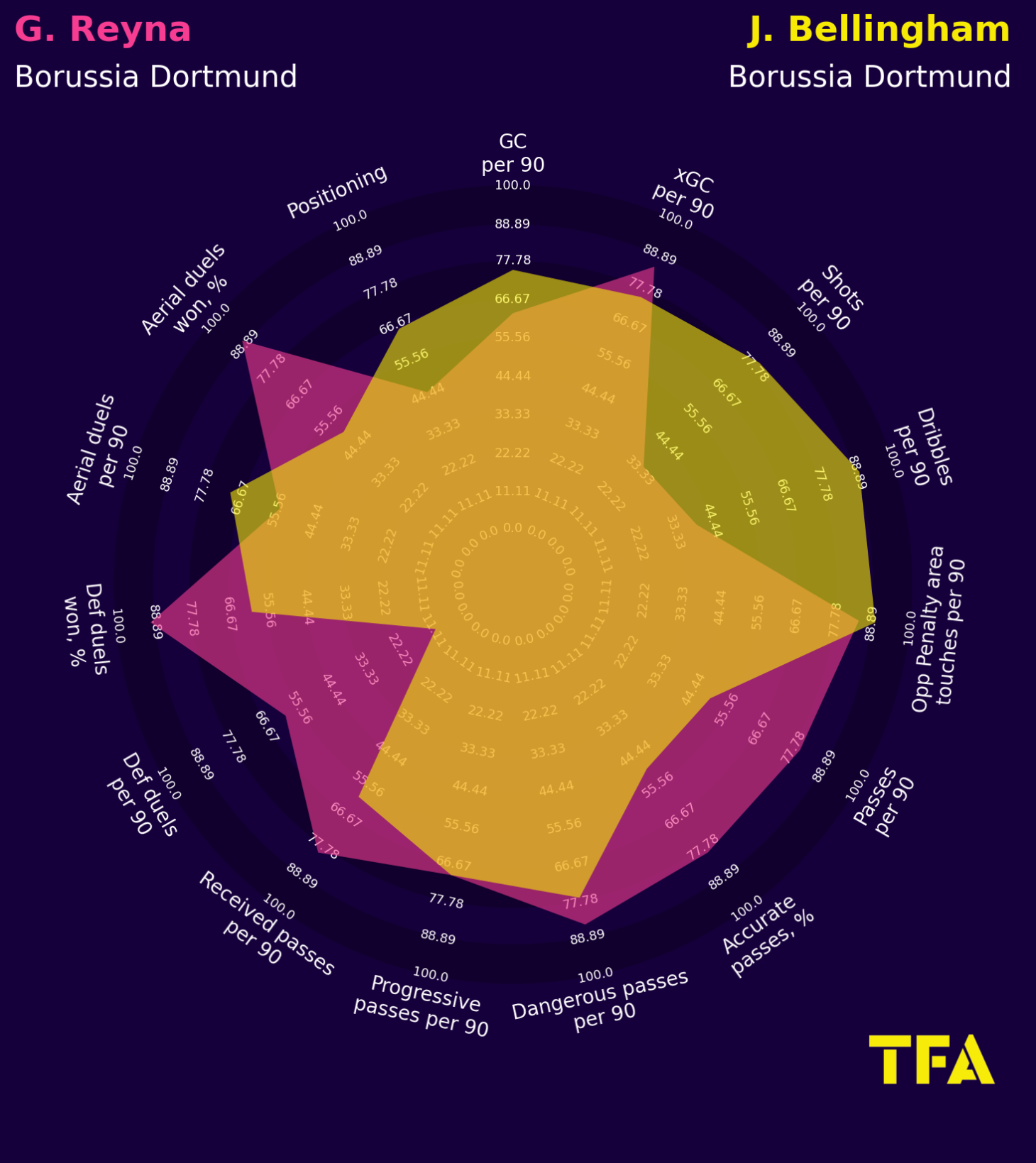 Gio Reyna has only had three starts this season. Therefore, the chances of the odds changing are unlikely. Therefore, both the 1×2 market and over/under lines could stay more or less the same.

Giovanni Reyna has been playing for Dortmund’s main team for the past four years and has done reasonably well. But with the game-changing so fast and other important players linked with a move away from the club, the responsibility on his shoulders will increase much more. It will be interesting to see if he can rise to the challenge.

Bailey could be on move to a Premier League club

Building a team of Bundesliga players that could challenge Bayern Munich...