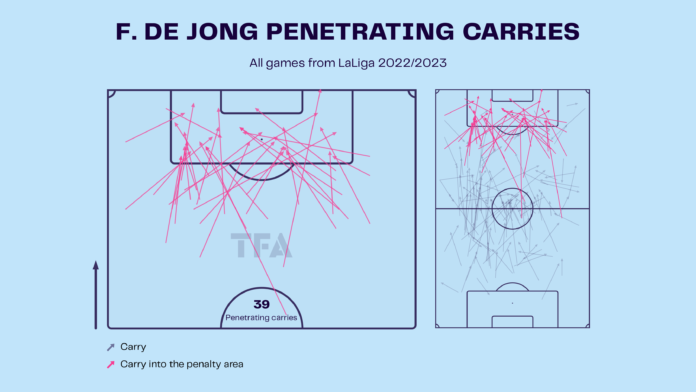 One of the stories that dominated the summer transfer window was the Frenkie De Jong saga. He has been linked with a move away from Camp Nou, particularly since the appointment of Eric Ten Hag as Manchester United manager. But the Dutchman refused to leave Barcelona and has evolved into one of the most important players for Xavi.

Now a new club has come forward to sign the Dutchman. According to reports, Bundesliga champions Bayern Munich want to sign the versatile midfielder in January.

De Jong is a unique player with skills that set him apart from other players. With his passing, running, and vision, De Jong brings a lot of qualities to the table. Bayern have tried to sign him in the past but were unsuccessful. Therefore, we look at some of his stats to understand why signing the Dutchman will add more versatility to Bayern’s midfield. 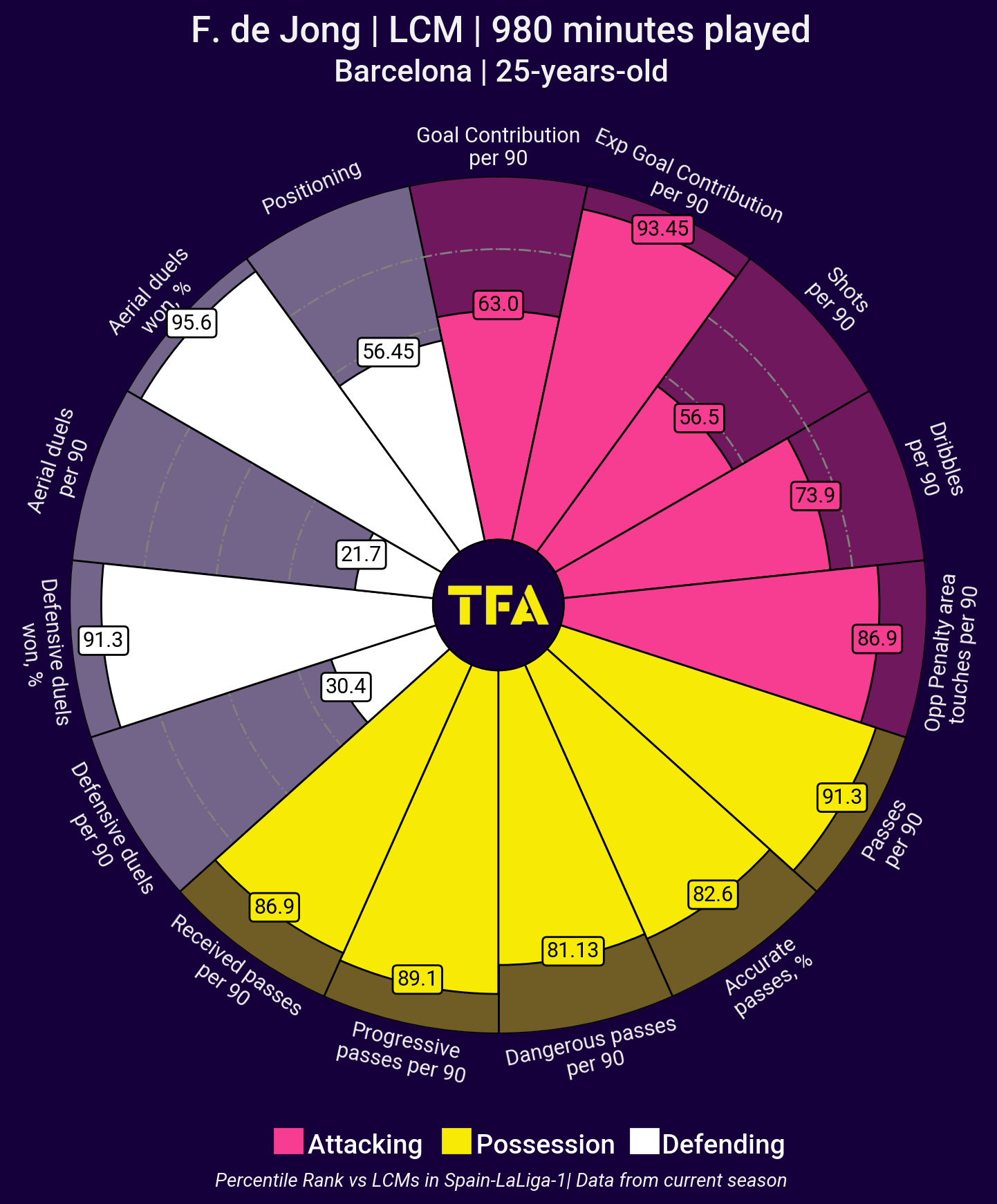 Frenkie De Jong is one of the most technically gifted players in the football world. He has found his form this season and has become an important player for Barcelona. De Jong played 13 matches in La Liga this season, starting nine and coming off the bench in four. He has scored two goals this season and has an assist as well. 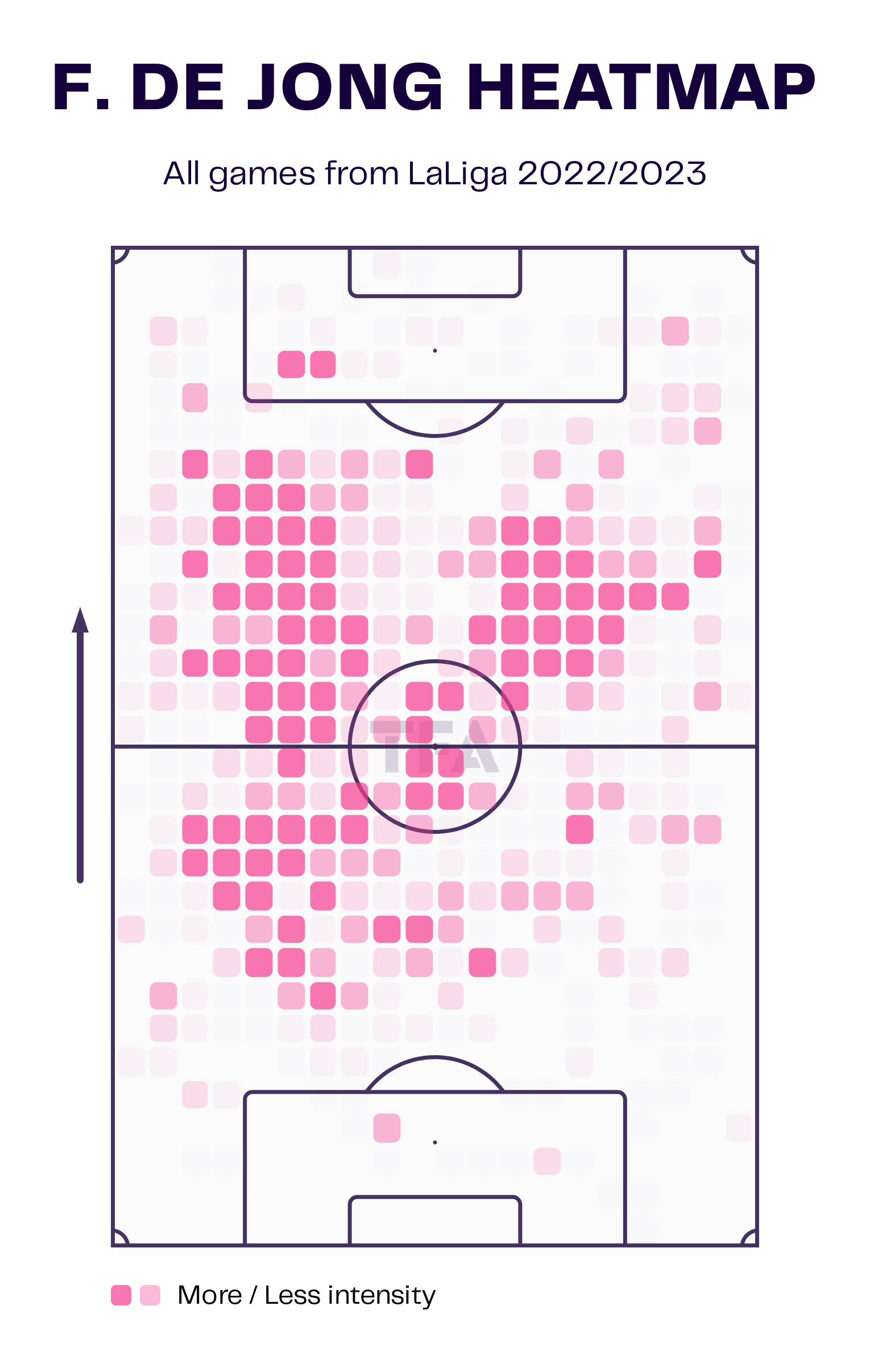 Frenkie De Jong is a versatile player in many ways. While his preferred position is that of a deep-lying midfielder, he plays as a number eight for Barcelona more often than not. He has done a good job there, especially this season, by making the runs into the box and occupying the half-spaces. His runs help create space for the wingers and forwards, who can drop a bit. De Jong has 1.93 touches in the penalty box this season and 3.86 progressive runs per game, which is an improvement from 2.39 runs per game from last season.

Apart from playing as a number eight, De Jong can also play both as a single pivot and in a double pivot. He has good defensive skills and the awareness to anticipate passes and movements. De Jong is calm under pressure and is pressure-resistant. He calmly looks up for his teammates and finds the right pass almost invariably. Even though he sometimes gets caught napping, he quickly covers his ground and takes the necessary steps.

This flexibility can help Bayern, as they already have a group of talented midfielders and can rotate them. Moreover, Bayern plays with a 4-2-3-1 formation, which would see De Jong playing in his preferred position. 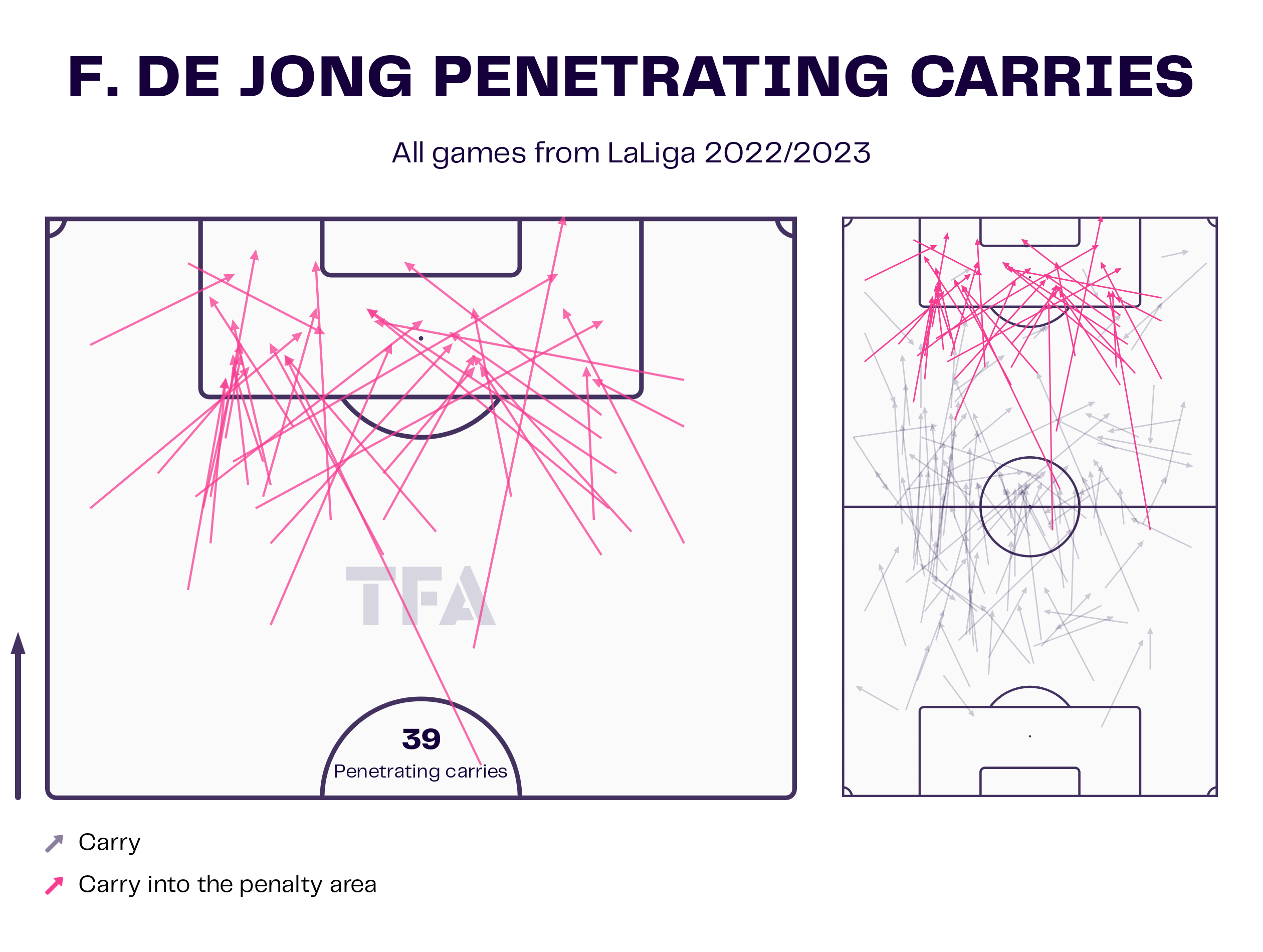 Arguably, carrying the ball is one of De Jong’s best qualities, and he is one of the best at it. De Jong, when he has the space, makes some incredible line-breaking bursts. These runs have been extremely beneficial to Barcelona, particularly against low-block teams. De Jong has made around 2.76 dribbles per game with a 66.7% success rate on average this season. This is up from an average of 2.22 dribbles per game last season. Bayern got a taste of this when they faced Barcelona in the Champions League this season, where fouling De Jong was the only option left for them. This could prove to be priceless for Bayern Munich, as their current midfielders are not natural dribblers. 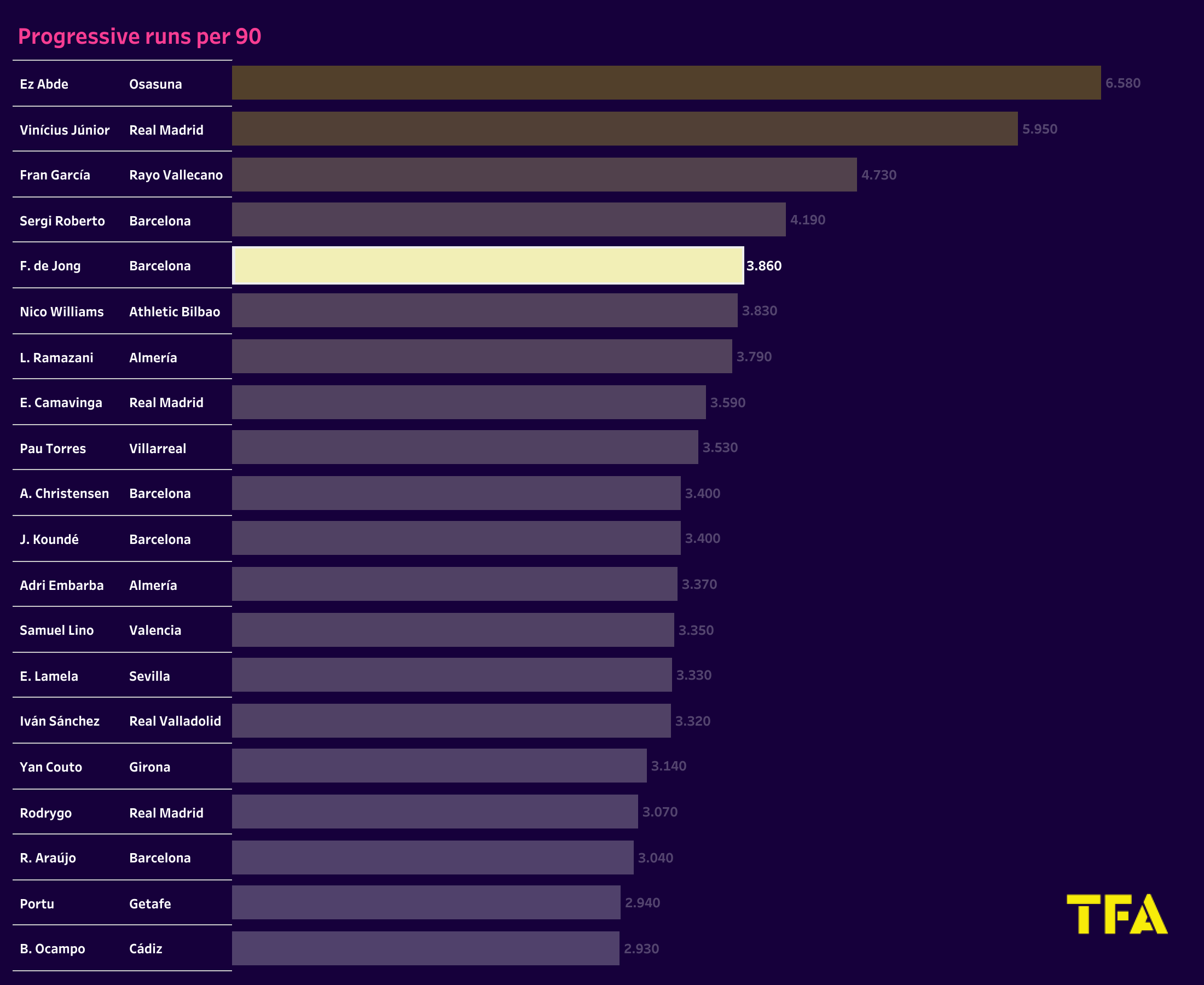 The above visual shows the progressive runs by players in La Liga. Frenkie De Jong has the fifth-best record, making an average of 3.86 runs per game. 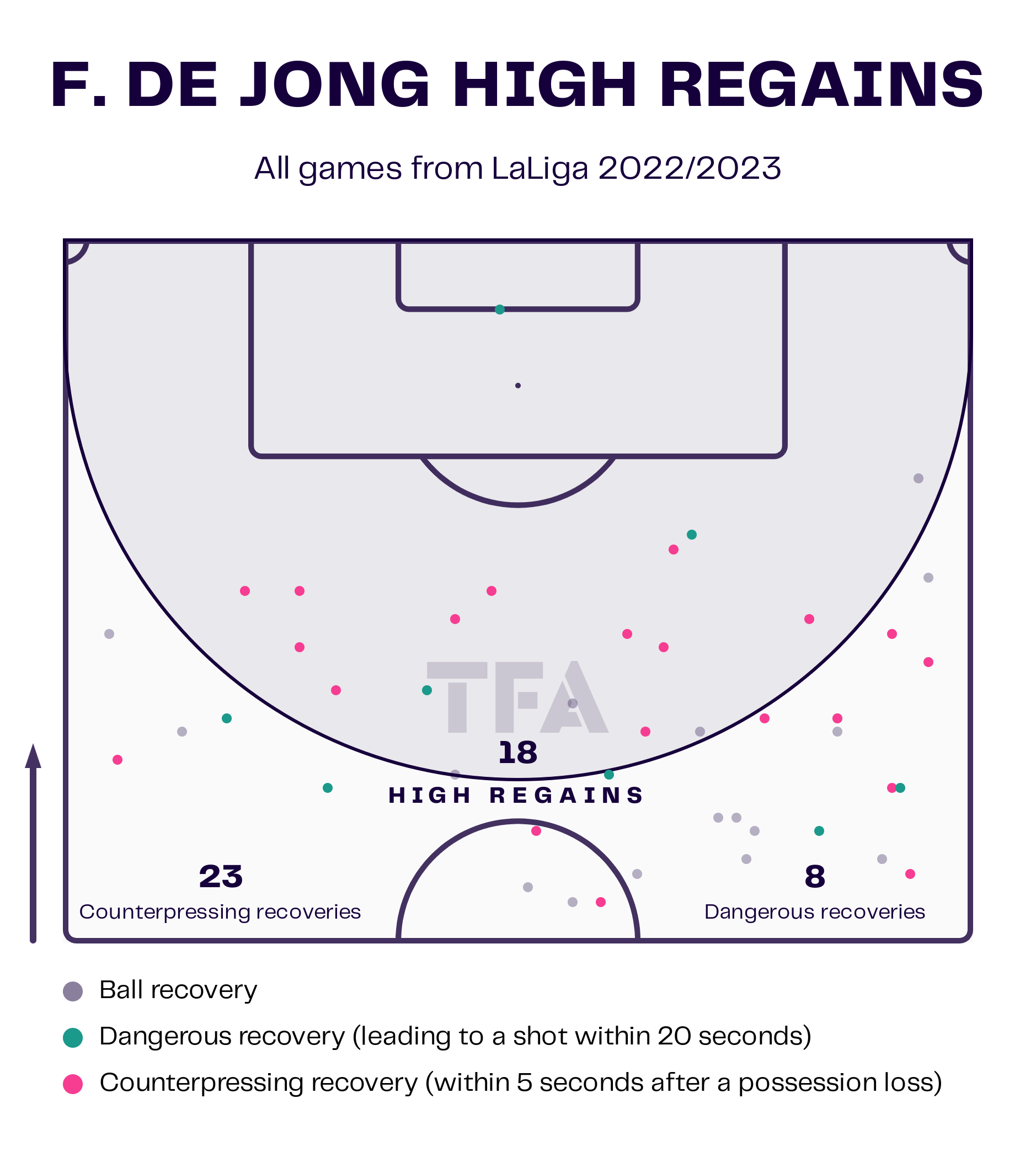 A common philosophy that Barca and Bayern follow is high pressing, and De Jong is very good at this. He has made 23 counter-pressing recoveries and eight dangerous recoveries this season and has helped Barca incredibly. De Jong has made around 8.33 recoveries per game on average this season, with 50.2% of them in the attacking half. Bayern is also a side that deploys a high press, and De Jong could help them there as well. 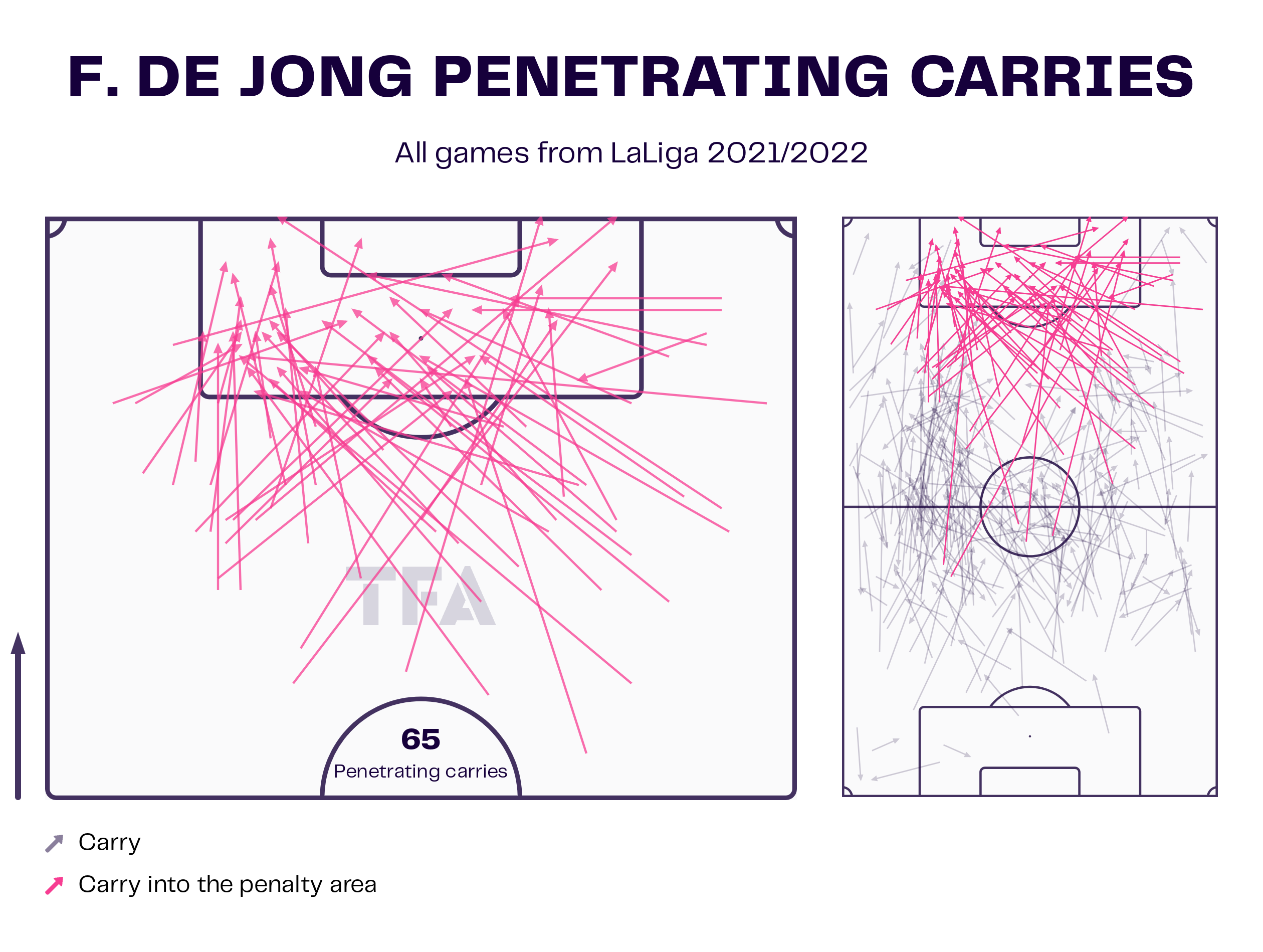 De Jong is at his best when he makes line-breaking runs consistently. It shows his confidence and comfort. Last season, he had 65 penetrating carries throughout the season. It was not his best season, and he averaged around 2.19 dribbles per game with a 64.9% success rate. But this year, it has gone up to 3.01 dribbles per game with a 66.9% success rate. He’s also gotten better at playing the number eight spot and making runs into the box.

A good replacement for Sabitzer 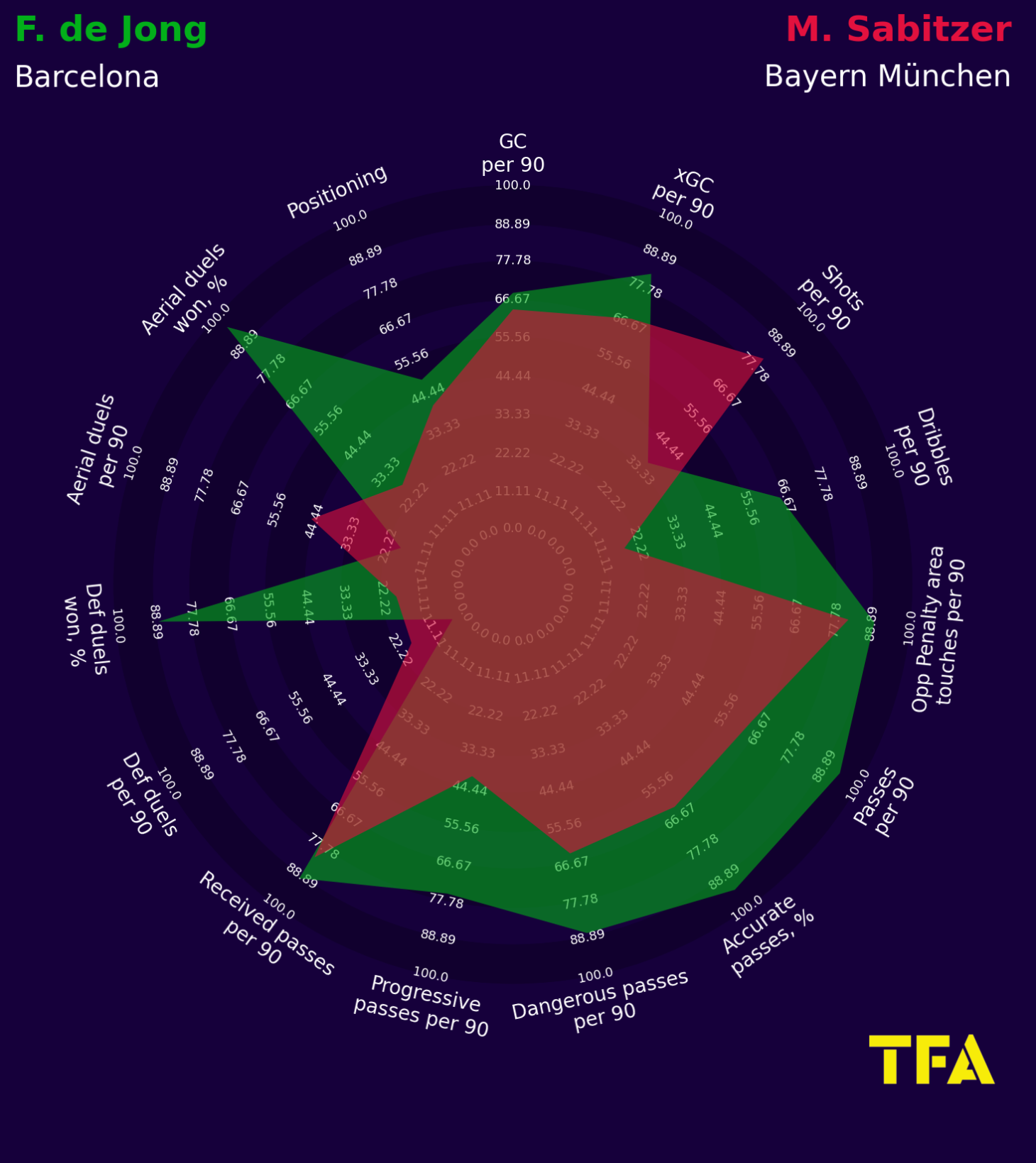 Bayern Munich is reportedly looking to sell Marcel Sabitzer. Frenkie De Jong would be an ideal replacement for him, if not an upgrade. Statistically, De Jong is better than Sabitzer in almost everything except shots per 90. The Dutchman has better dribbles, passes, duels, and entries into the opposition’s penalty box. De Jong’s calmness will also add value to the Bayern midfield.

Frenkie De Jong was not having the best of times last summer, with the club attempting to sell him and him being out of form. But this season, he has returned to form and secured a place in the starting lineup. De Jong had expressed his desire to continue at Barcelona during the World Cup. But if he decides to move to the Allianz Arena, it could help Bayern Munich immensely.

Finding a replacement for Thiago at Bayern Munich – data analysis