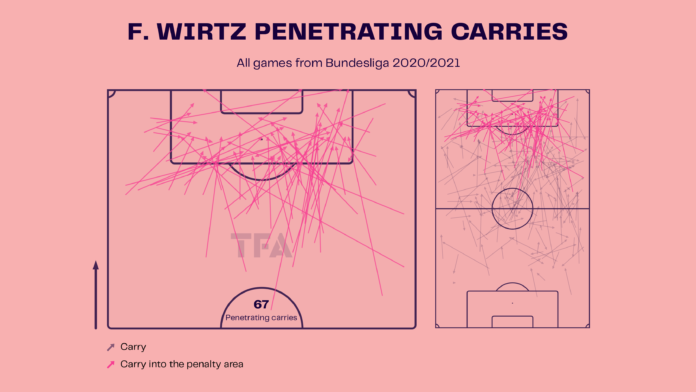 Florian Wirtz is one of the best talents to emerge from the Bundesliga recently. He has been a revelation for Bayer Leverkusen and played an important part in their campaign last year. Wirtz had scored seven goals and helped others score with ten assists as well. His brilliant season helped Leverkusen finish third in the Bundesliga last season. But an injury forced him to sit out this season. His absence has had a huge impact on the side, as they are now in the bottom 12 of the Bundesliga.

We look at some stats to understand how Florian Wirtz’s injury has impacted Leverkusen negatively.

Wirtz hasn’t played any games this season. He played 24 matches last season, starting 22 and coming off the bench in two. He had ten goals and 14 assists across all competitions last season. 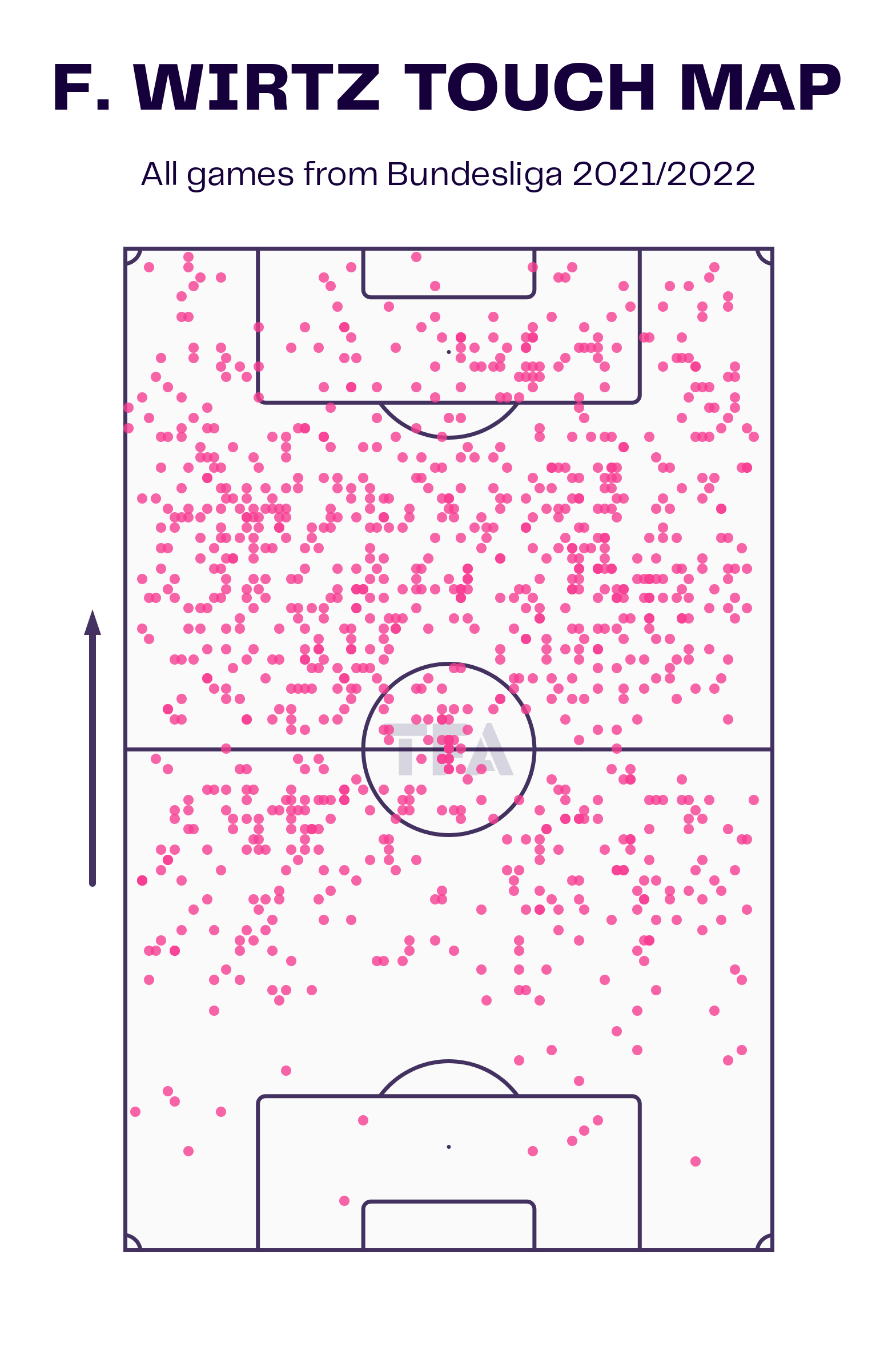 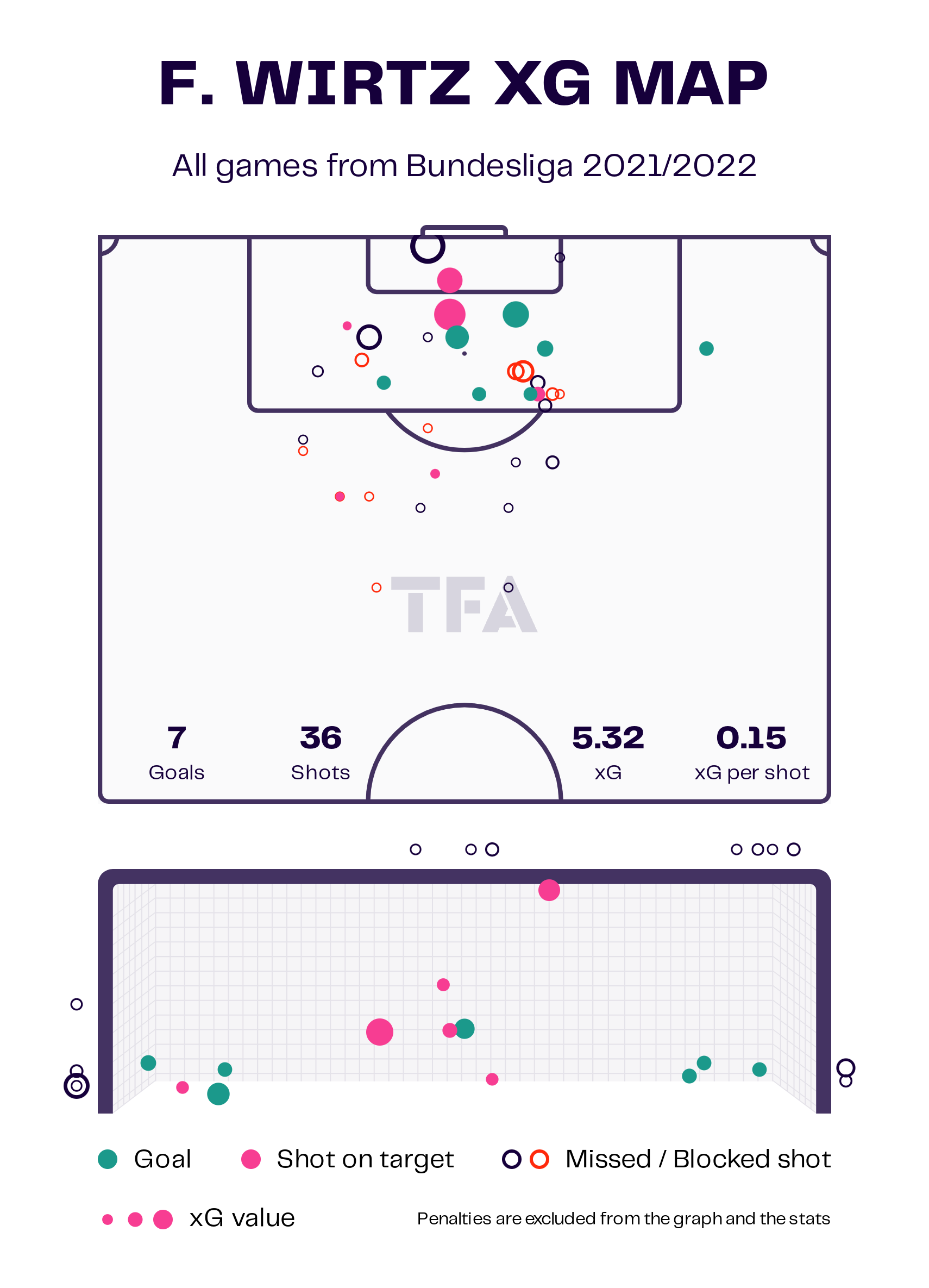 The first viz shows the touch map of Florian Wirtz for Bayer Leverkusen. He usually plays as an attacking midfielder and bosses the midfield. We can observe how a large portion of his touches are in the attacking half. He stays there as a constant presence and is always capable of creating opportunities out of nothing. He is a creative player and has great vision as well. Wirtz also enters the penalty box often and enjoys an average of 3.36 touches in the penalty box.

The second viz shows the xG map of Florian Wirtz. He attempted a total of 36 shots last season, out of which 23 were from inside the penalty box. Of these shots, 13 were on target. The above viz shows that he has scored the majority of his goals from a central position in front of the post. He averaged around 1.63 shots per game, with 41.7% of them on target. He scored an average of 0.34 goals per game as well. 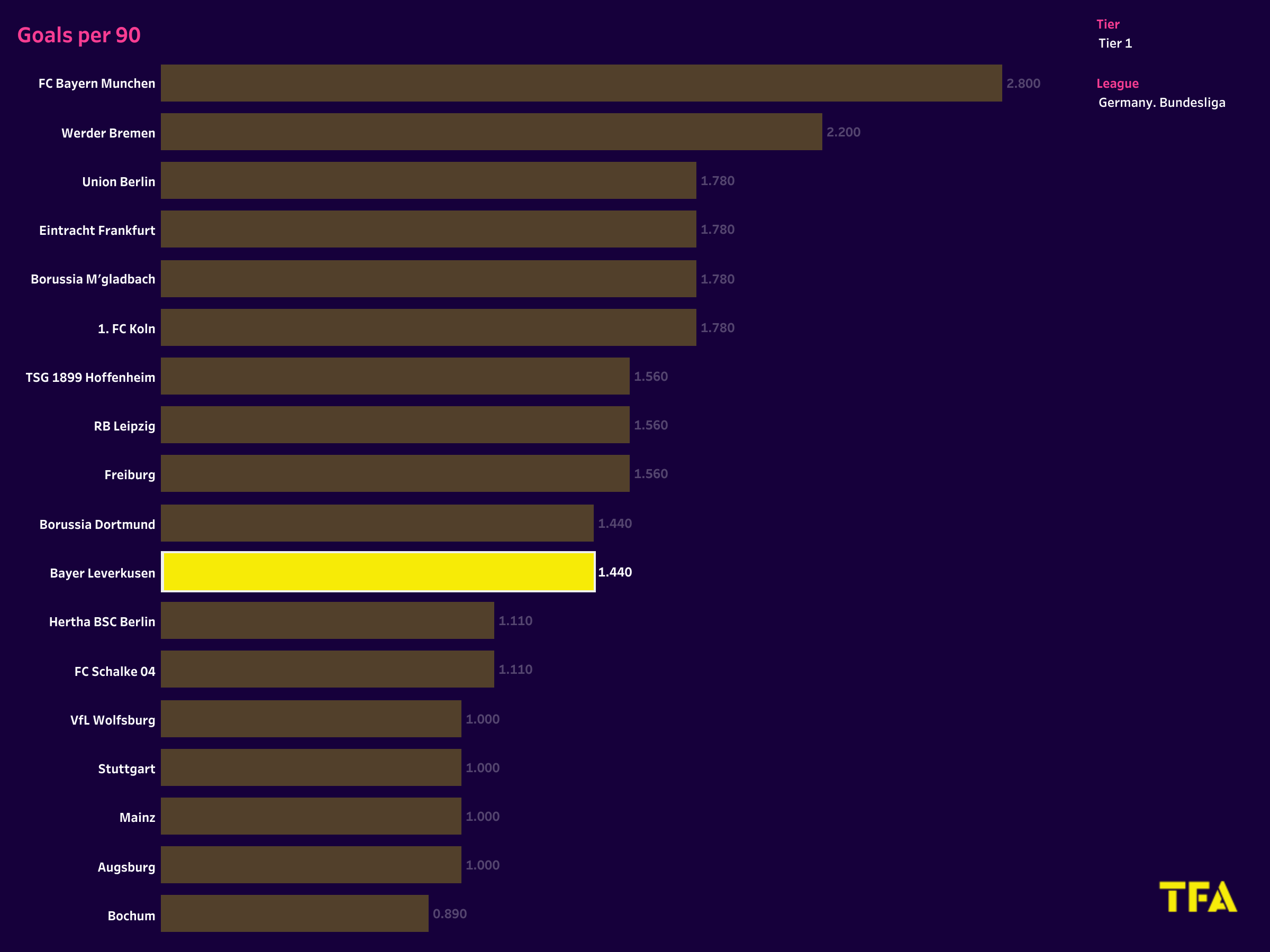 This season, Bayer Leverkusen has found it a bit more difficult to produce goals. They averaged 2.2 goals per game last year. But this year, it has come down to 1.4 goals per game. Wirtz’s ability to score and produce goals out of thin air helped them immensely last season. 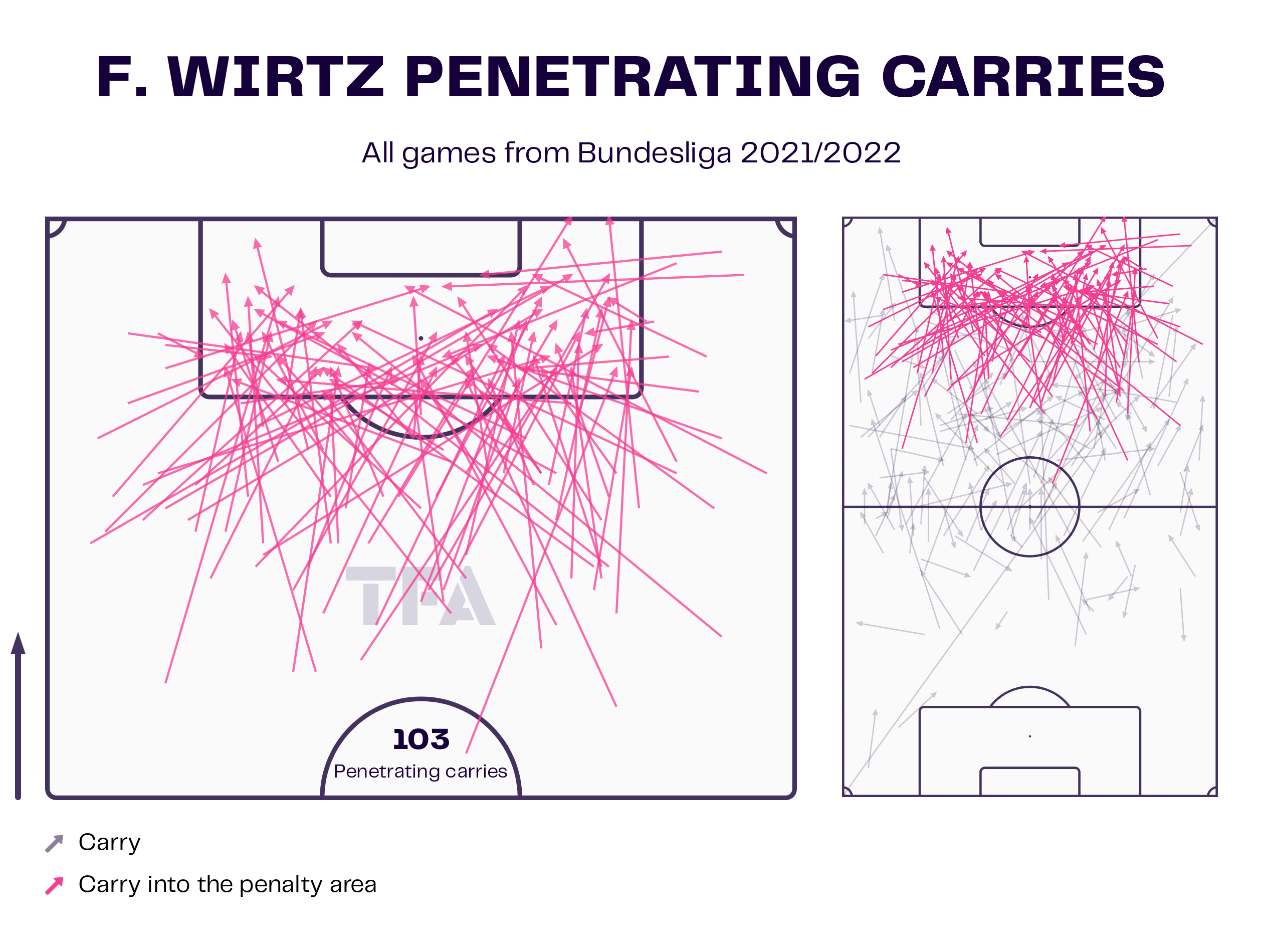 Dribbling is another area where Florian Wirtz excels. His style of play is a delight to the eyes, and keeps the viewer glued to the screen with his twinkling feet. Wirtz averages 4.72 dribbles per game with a success rate of 48.9%. This season, Leverkusen has lacked a player who can run at defenders with the ball at his feet. Wirtz also makes around 2.75 progressive runs per game. These runs help the team as they draw the defenders away from the other players and create space for them to play. Wirtz is also the main exponent of quick counterattacks as he dribbles past others and releases forwards. The counterattacks have also come down from 4.78 per game last year to 2.4 per game. 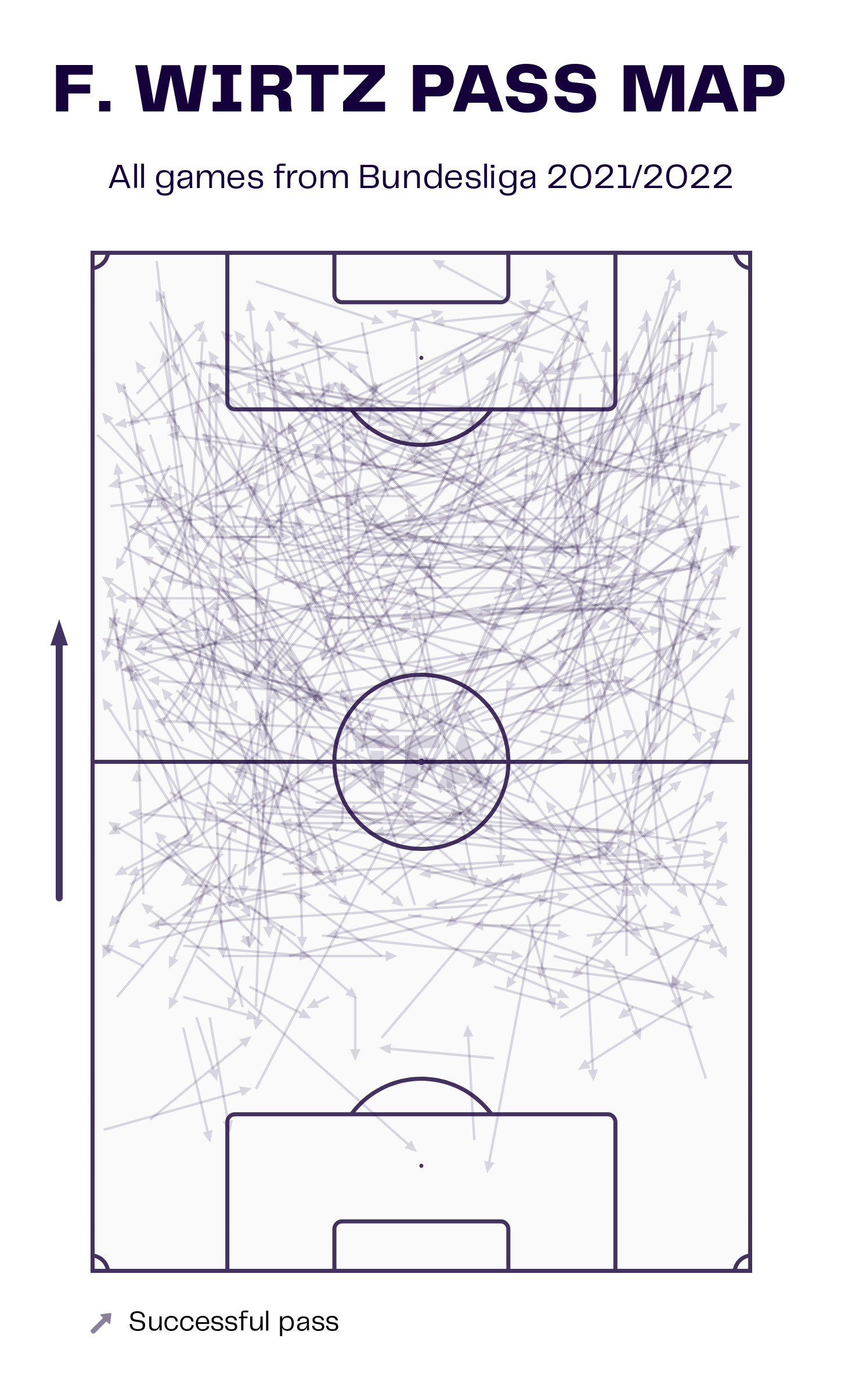 Florian Wirtz is a midfield maestro with an incredible vision. He has an uncanny ability to find the perfect pass every time. The 19-year-old has a passing accuracy of 80% and plays around 4.59 passes into the final third per game. He completes 66.7% of these and racked up ten assists last season. Wirtz also averages 3.91 passes into the penalty box with a 60% accuracy rate. In his absence, the average number of smart passes played by the team has reduced from 7.8 to 5.32 passes per game.

Florian Wirtz’s absence has affected Bayer Leverkusen in many ways. His creativity, vision, and technique are uncanny and therefore cannot be easily replaced. Bayer Leverkusen has only 18 points this season from 15 matches. But the news of his recovery from the injury will be encouraging for the team, and Xabi Alonso will be hoping that the youngster can return to his best form as soon as possible.

‘Absolutely not’- Real Madrid should avoid move for Liverpool target