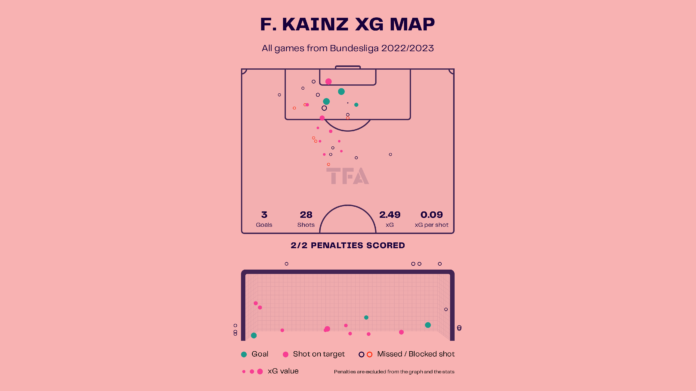 FC Koln is going through a rough patch in the Bundesliga, having gone winless in the last six matches. Therefore, its players will have to step up to change their fate. One of the players who has stood up and done well this season is the 30-year-old midfielder, Florian Kainz. Kainz has scored five goals and assisted another four this season and is an important part of the team’s setup. His passing range, dribbling and scoring abilities make him a player to watch out for for the opponents. Therefore, we look at his stats from this season to understand why he will have a big role to play in reviving Koln’s fate. 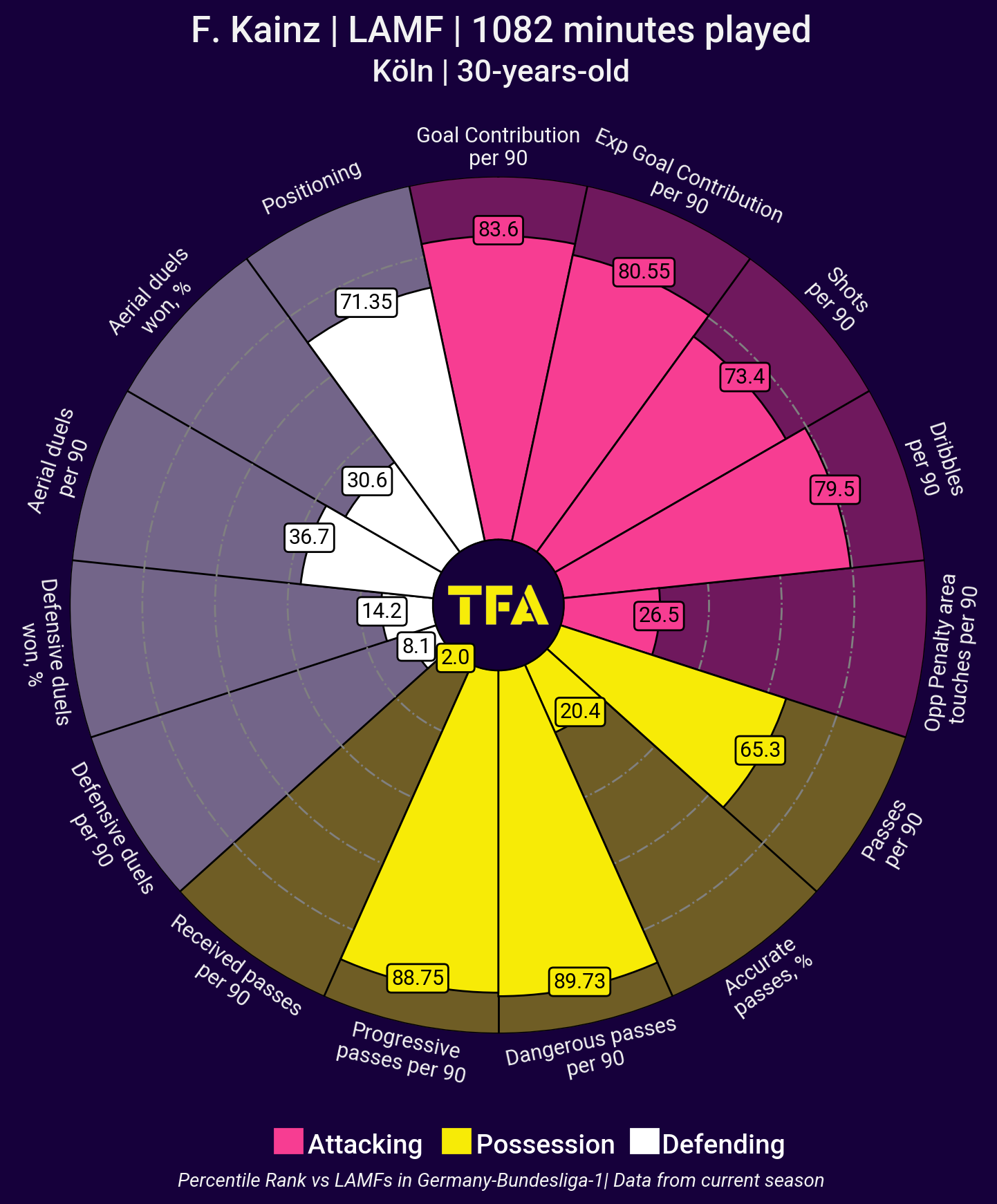 The above visual shows Florian Kainz’s percentile rank from the current Bundesliga season. The midfielder has good stats in passing and attacking. Kainz, who has scored five goals this season, is ranked highly for goal contribution per game. He has a high percentile rank for shots and dribbles as well. For passing, he is ranked in the top 89.73 percentile for dangerous passes per game and the top 88.75 percentile for progressive passes per game as well. Another area he has done well in is positioning himself. 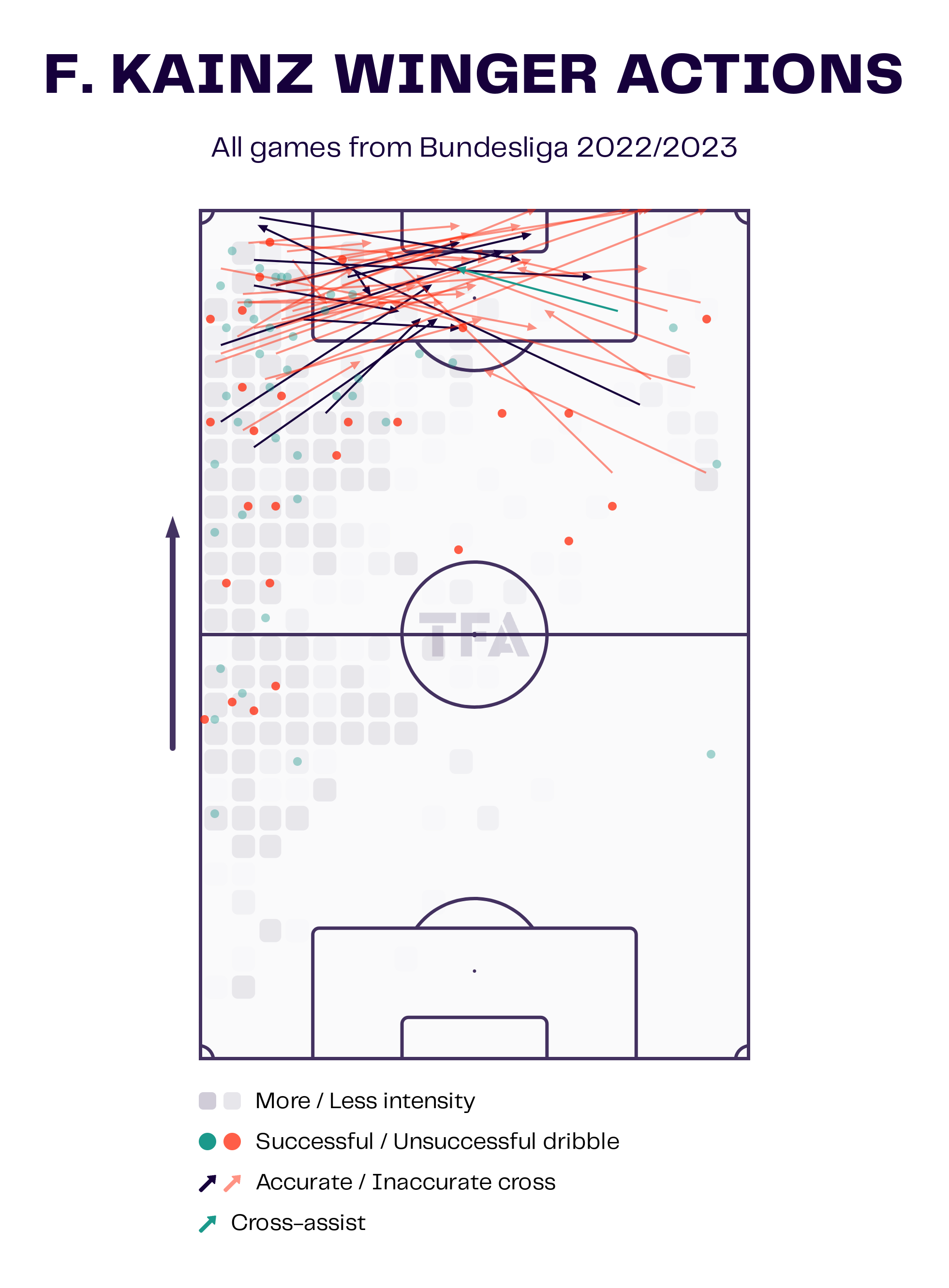 The above visual shows Florian Kainz’s actions as a winger. He plays as a left-attacking midfielder and can take on players or play crosses into the box. Kainz is not hesitant to take on defenders and takes part in an average of 9.4 offensive duels per game with a 50.4% success rate. As we can observe from the visual, he also plays many crosses into the penalty box. On average, Kainz makes around 4.33 crosses per game with 25.4% success. He will have to continue delivering crosses, but with more accuracy, to keep Koln alive. 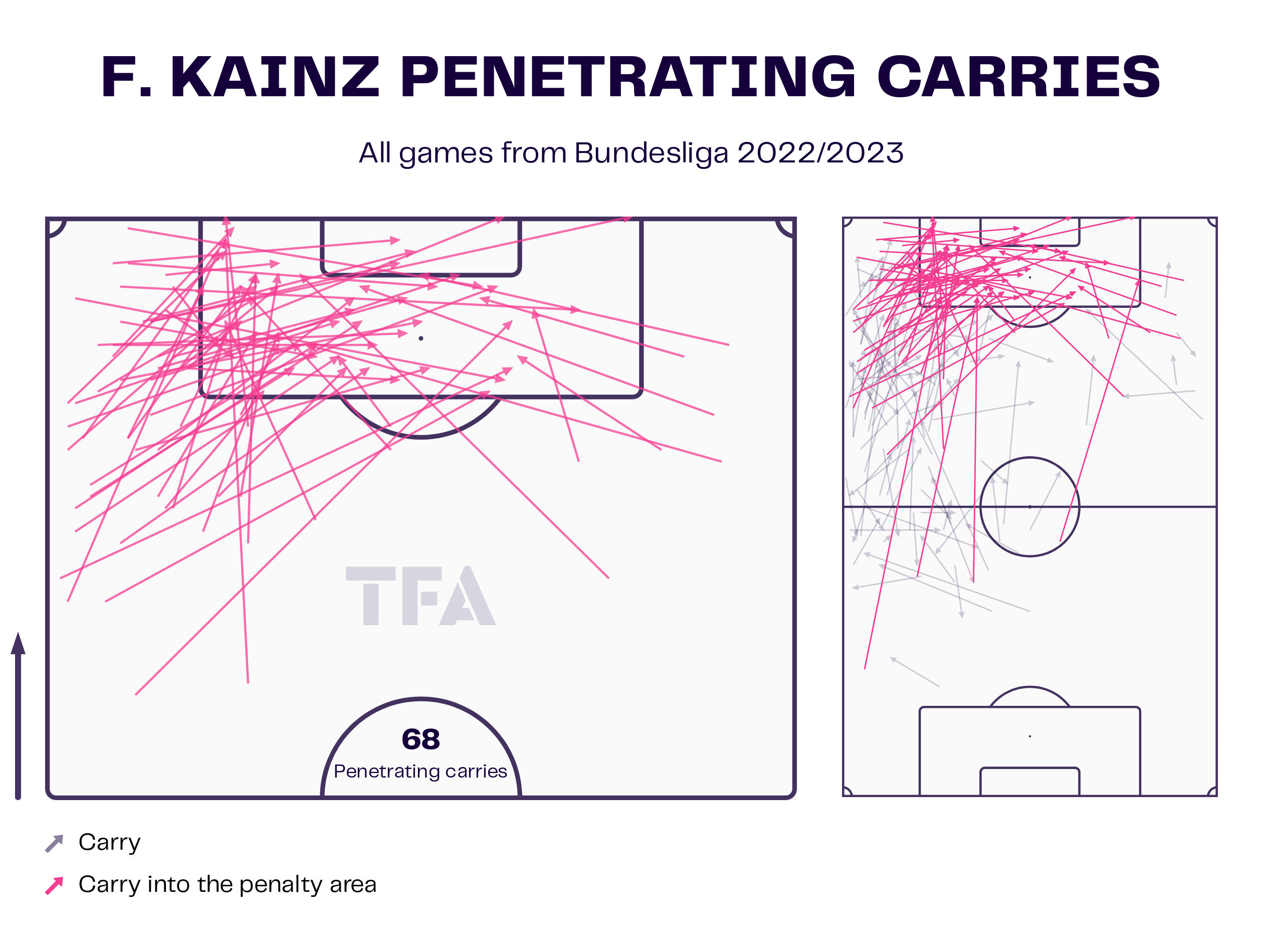 Florian Kainz is a good dribbler and has some silky movements as well. He has made an average of 5.57 dribbles per game this season with 59.7% success. He has made 68 penetrating carries this season, which has been important for Koln’s attack. Apart from the dribbles, Kainz also makes around 2.33 progressive runs per game. We can observe from the visual that he likes to make diagonal runs into the penalty box. 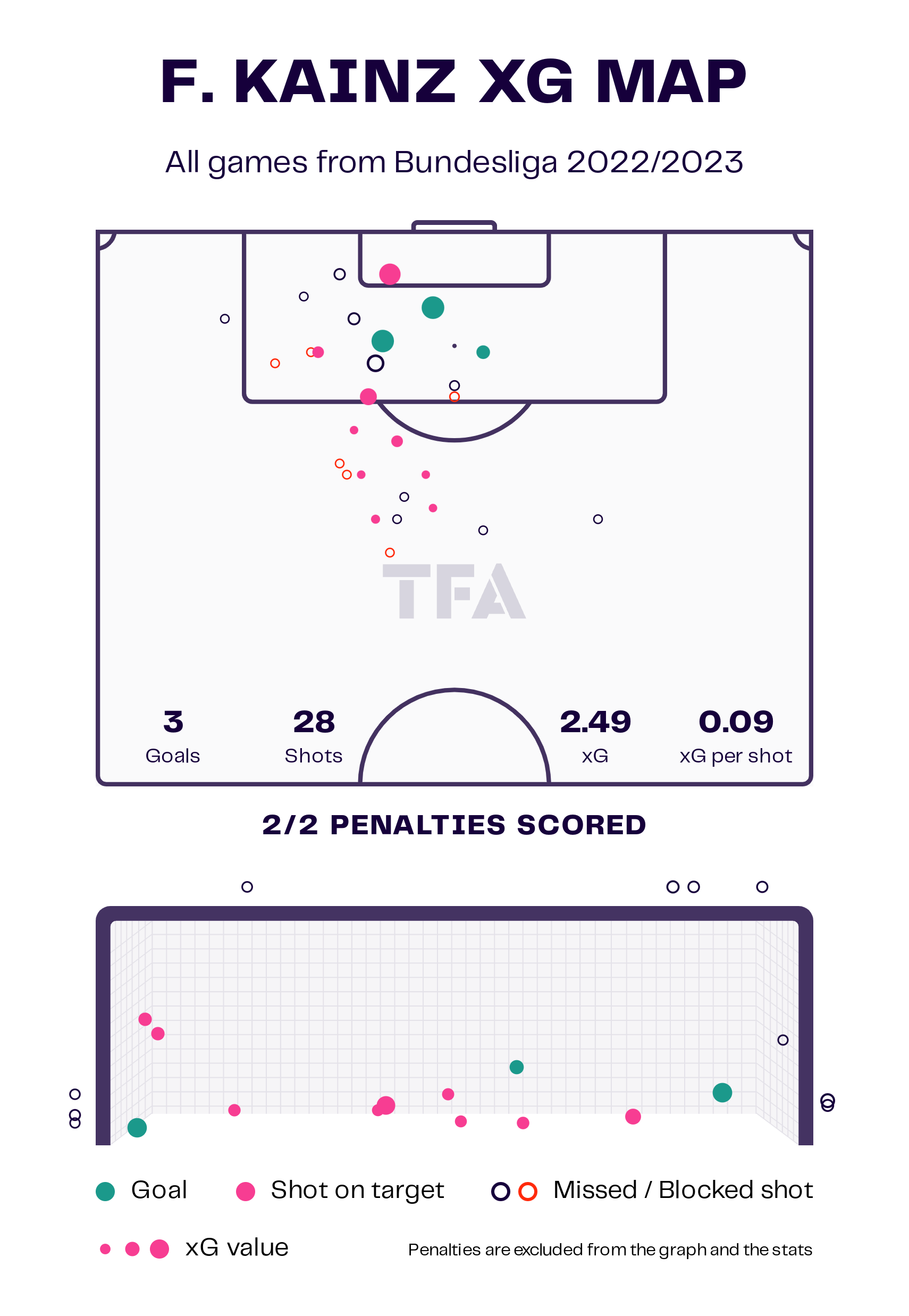 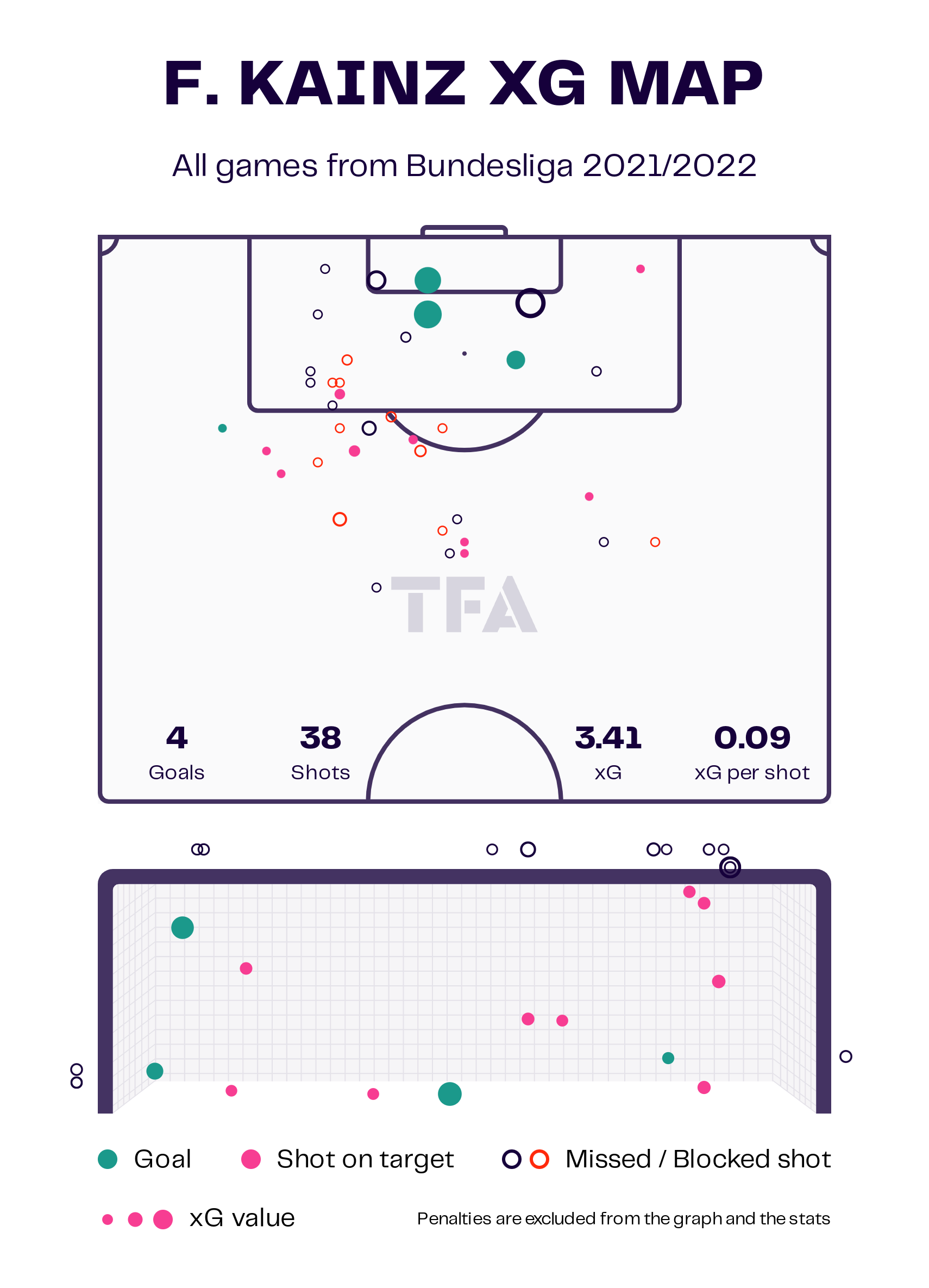 The two visuals above show Florian Kainz’s xG maps from the previous season and the current season. Last season, he scored four goals for Koln. Kainz attempted 38 shots last season, with 13 of them on target. He played an average of 1.41 shots per game with 34.2%. We can understand from the visual that he attempted many shots from both inside and outside the box.

This season, he has already scored more goals than last year. He has scored five goals this season. Kainz has attempted 28 shots this season, averaging 2.5 shots per game with 46.7% of them on target. Out of the 28 shots, 13 were on target, and he has attempted many shots from both inside and outside the box. He scored three goals from open play and two from penalties. 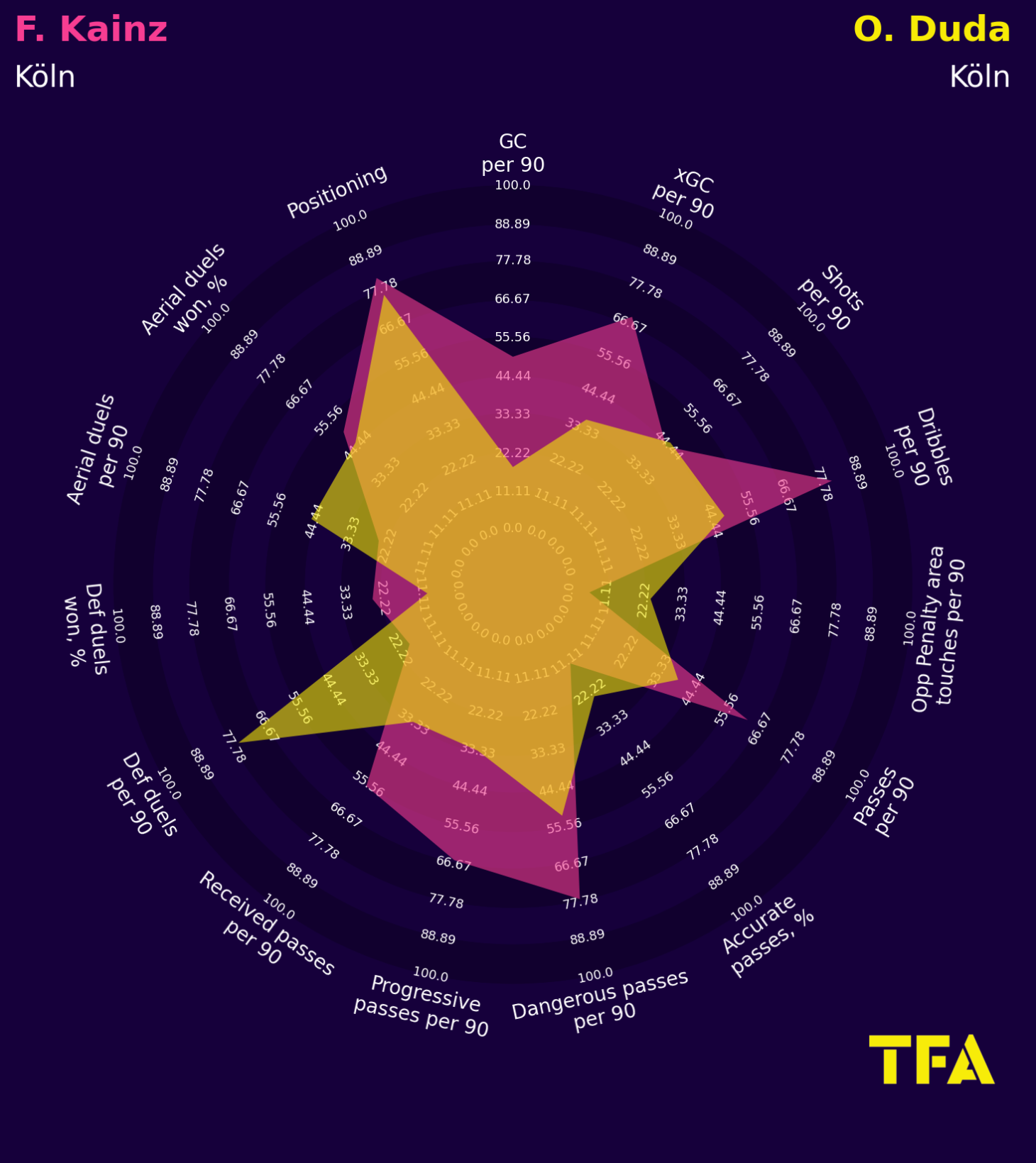 The above visual compares the radars of Florian Kainz and his teammate Ondrej Duda. They both play in the midfield for Koln and are regular starters. Kainz has better stats than Duda in passes, dribbles, shots, goal contributions per game, and positioning, while Duda has better stats in defensive duels, aerial duels, and touches in the opponent’s penalty area.

Florian Kainz has been a regular starter for Koln, and he has justified his place in the starting lineup with good performances. His goals, assists, and ability to create threats are very important from Koln’s perspective and they will be hoping that the 30-year-old will continue to produce magic when the season restarts next week.

The Stats: Bolivia lose away to Chile

‘Absolutely not’- Real Madrid should avoid move for Liverpool target