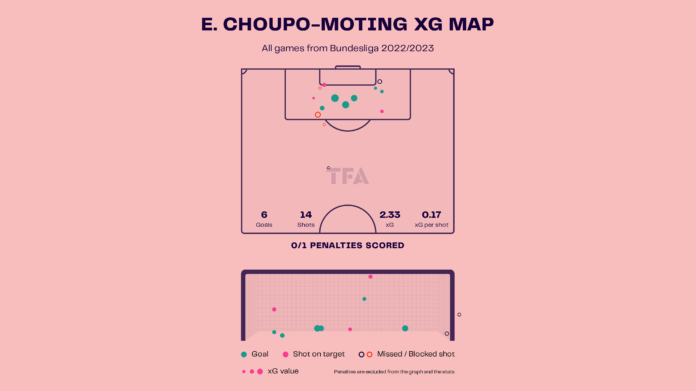 Eric Maxim Choupo-Moting signed for Bayern Munich in 2021 but had to play in the shadow of the great Robert Lewandowski. But ever since the veteran bid farewell to the Allianz Arena, Bayern has turned to the Cameroon International to play in the number 9 position.

Choupo-Moting joined Bayern from Paris Saint-Germain in the 20/21 season after spending two seasons with the Parisians. He returned to the Bundesliga after four years to join the Bavarians and has had a good time in their colours. Choupo-Moting, who missed the first few matches of the season due to an injury, returned to the team in the match against Stuttgart. He had to wait for four matches to find the back of the net, but once he did, the floodgates were opened, and he now has six goals and two assists in the Bundesliga. We look at some stats to understand how Choupo Moting has not let Bayern Munich miss Lewandowski. 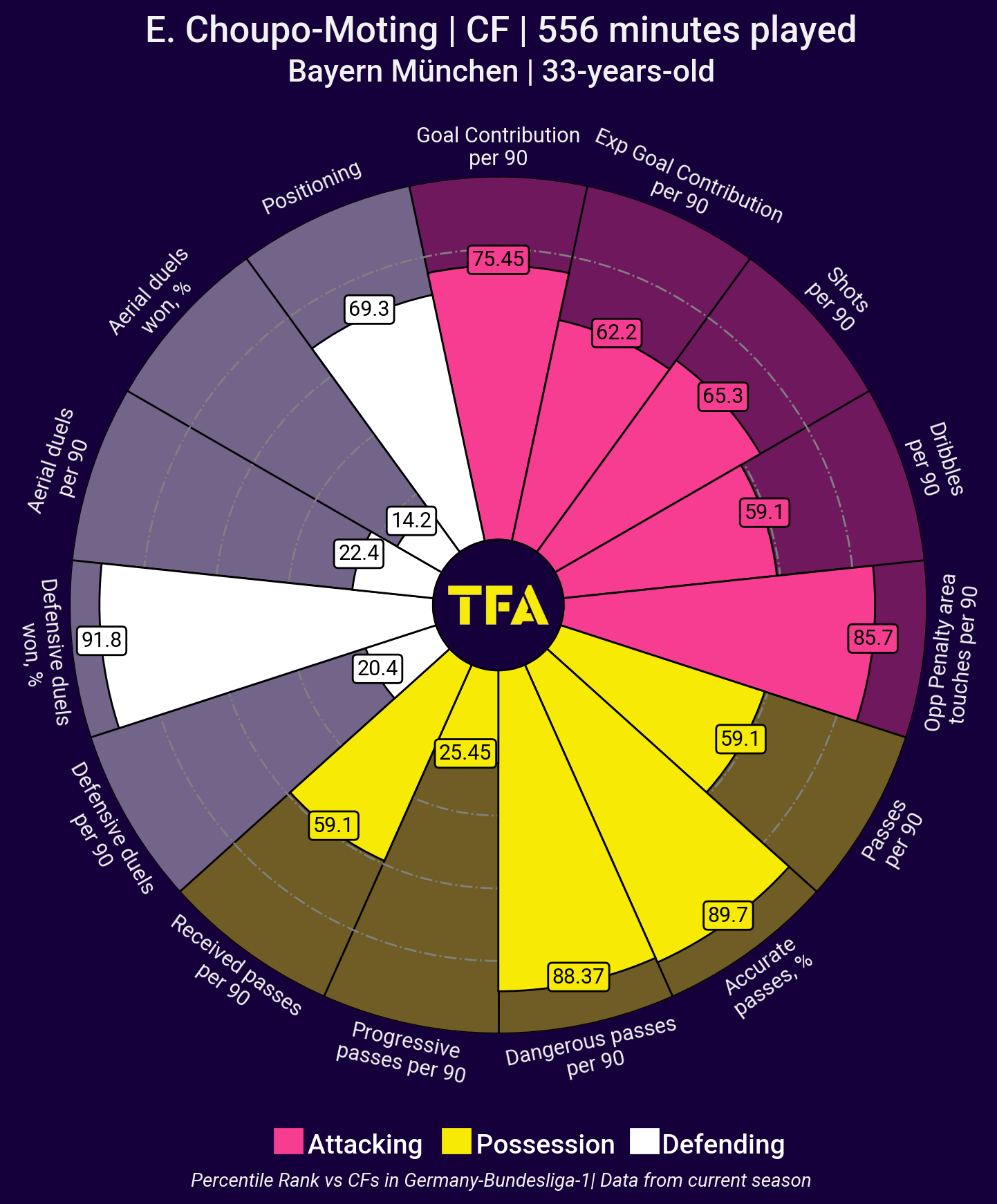 The above viz shows the percentile rank of Eric Maxim Choupo-Moting compared to other centre-forwards in the Bundesliga. He has great attacking and passing stats. He also does well in defensive duels and is ranked in the top 91.8 percentile for the same. Choupo-Moting has a high percentile score for dangerous passes and accurate passes per 90. He is also ranked highly for getting into the opponent’s penalty box as well. 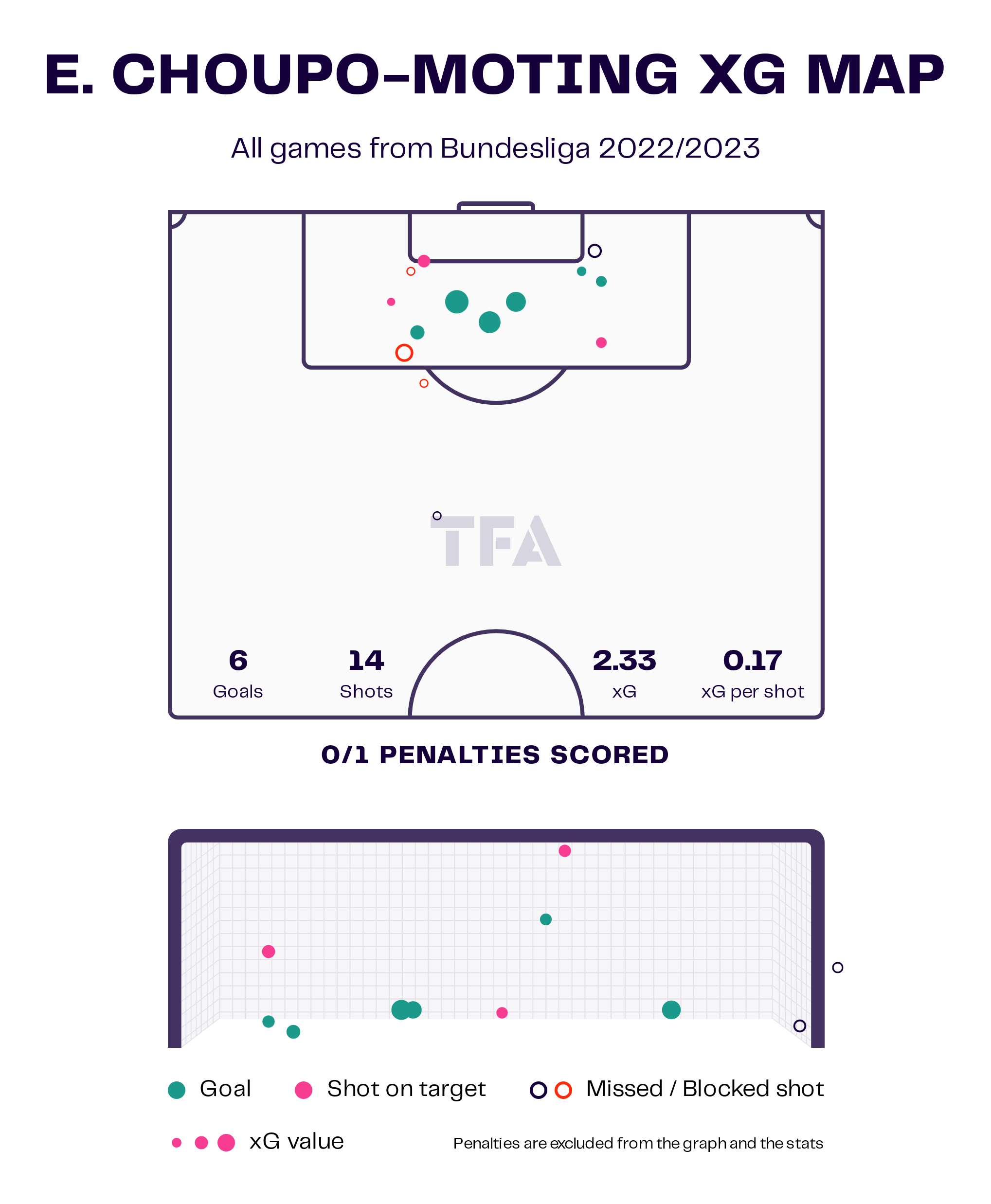 The Cameroonian International has done brilliantly in front of the goal. Quick and decisive with the ball, Choupo-Moting flies past players and finishes the chances. Averaging 2.43 shots per game with a 66.7% accuracy, the 33-year-old has racked up six goals in the Bundesliga. He has attempted a total of 14 shots, almost all of them from inside the penalty box. 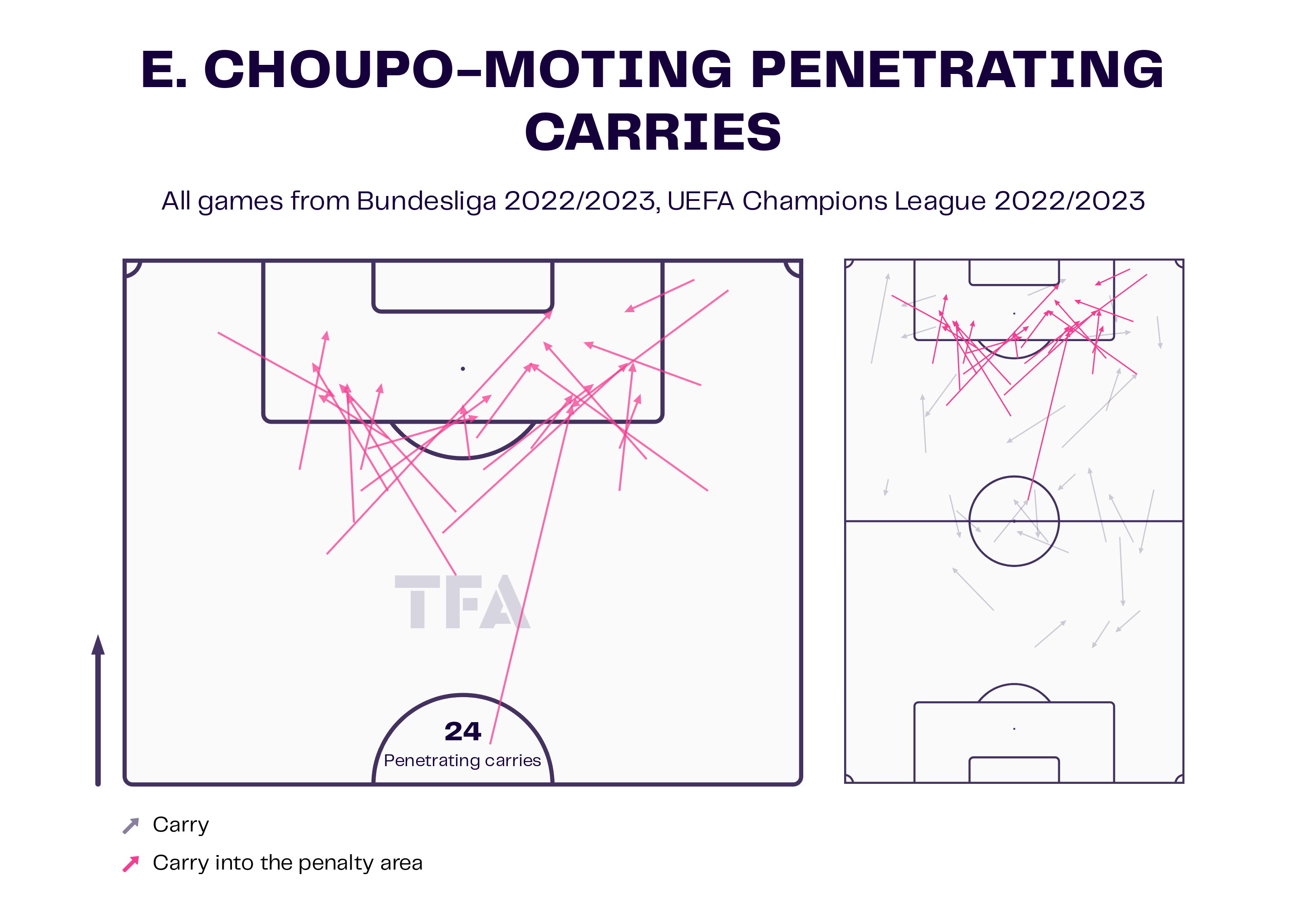 The above viz shows the penetrating carries made by Choupo Moting. Though he is not a prolific dribbler like some of his teammates, Choupo Moting does well to take the ball forward with him in quick transitions. Bayern is a team that plays vertical football under Naglesmann. The presence of someone like Choupo-Moting helps the team have a focal point and release passes. He averages around 3.24 dribbles per game with a 55% success rate. 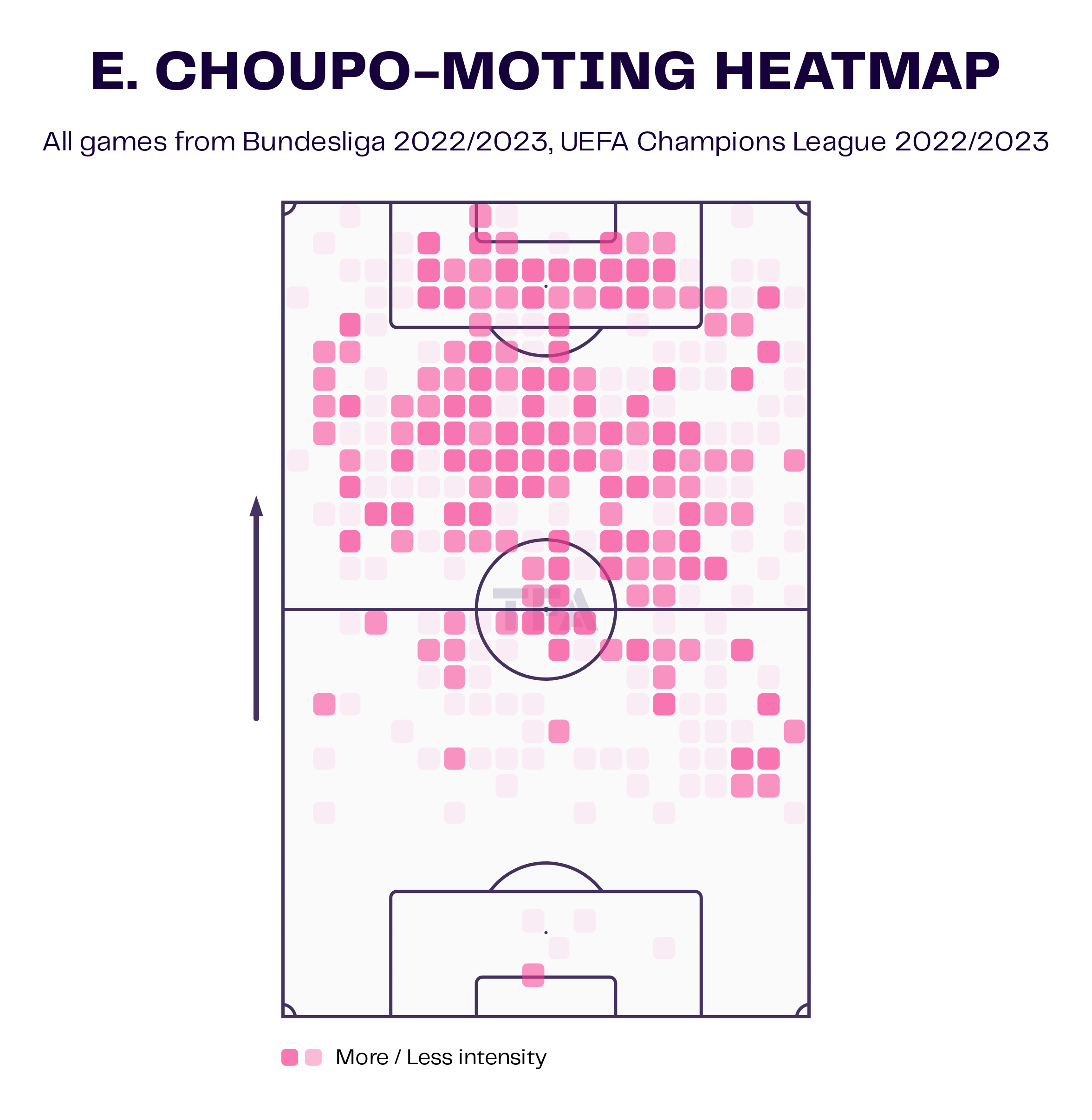 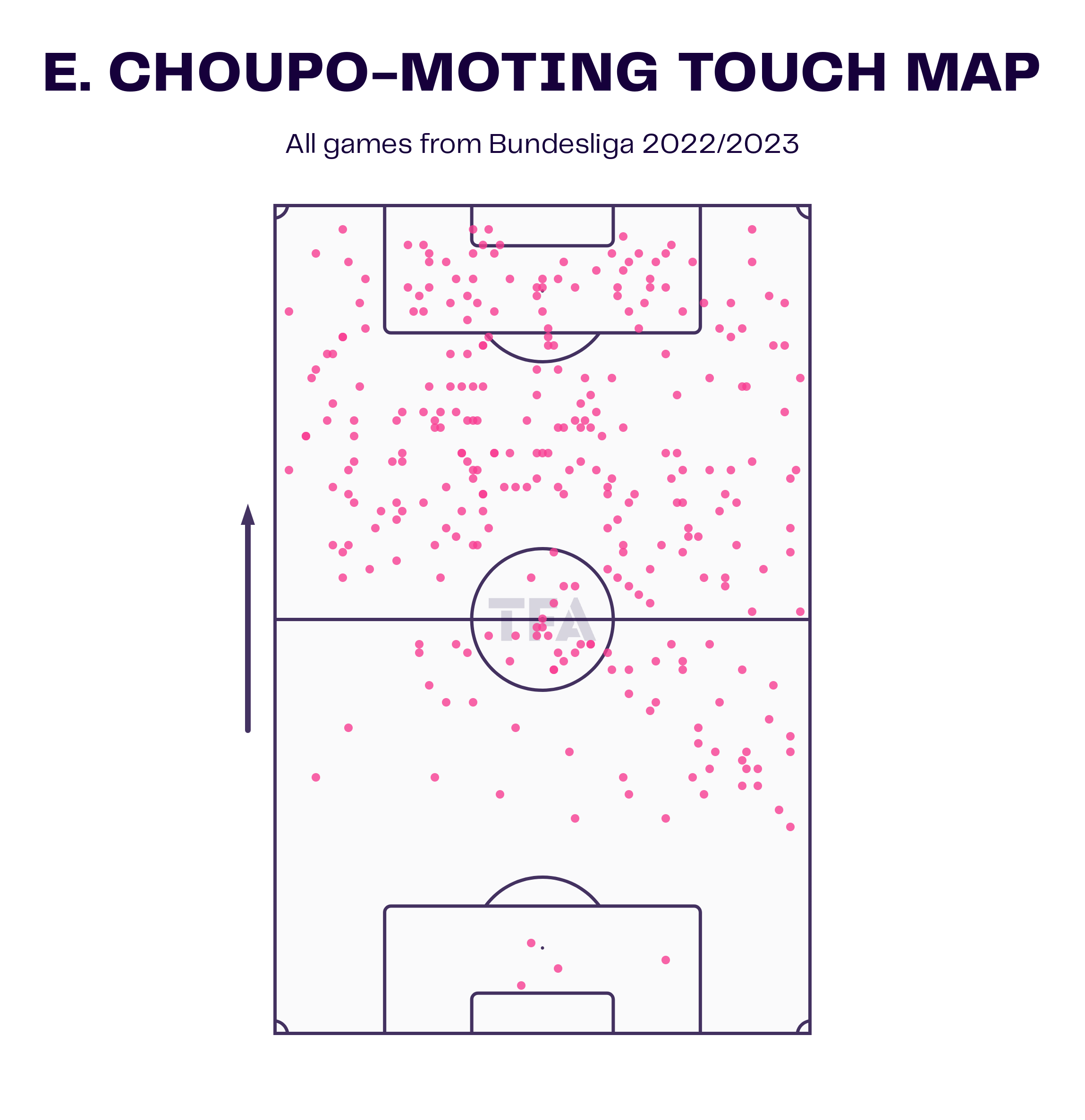 The above viz shows the heat map of Choupo-Moting. We can observe how he mainly stays in the attacking half and likes to be the focal point of the team. The 33-year-old has now earned Julian Nagelsmann’s trust and starts every game. Choupo-Moting tries to stay forward and runs into spaces, providing an option for a quick counter-attack. His awareness and timing of runs are worth mentioning too. As the touch map suggests, Choupo Moting usually takes most of his touches in the attacking half. He is a classic number nine and therefore tries to get into the penalty box as much as he can. The striker has an average of 4.86 touches in the penalty area. 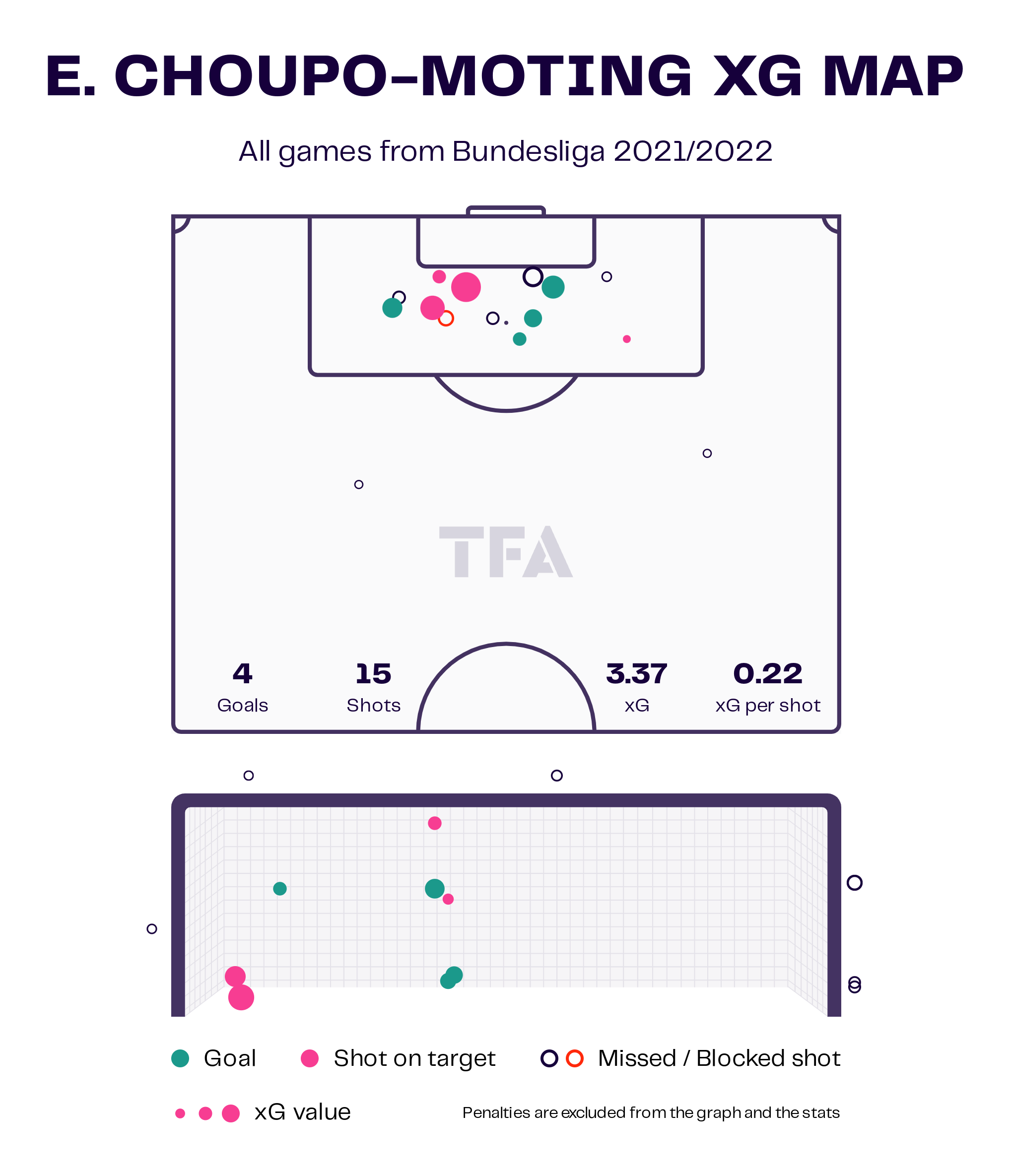 Compared to last season’s record, Choupo Moting has already scored more goals. He attempted a total of 15 shots last season, with 13 of them coming from inside the penalty box. The former PSG forward took around 3.13 shots per game with 53.3% accuracy. This year, however, this figure has seen a decline, as he has an average of 2.43 shots per game. Although the average goals per 90 minutes have gone from 0.83 to 0.97 goals per game, 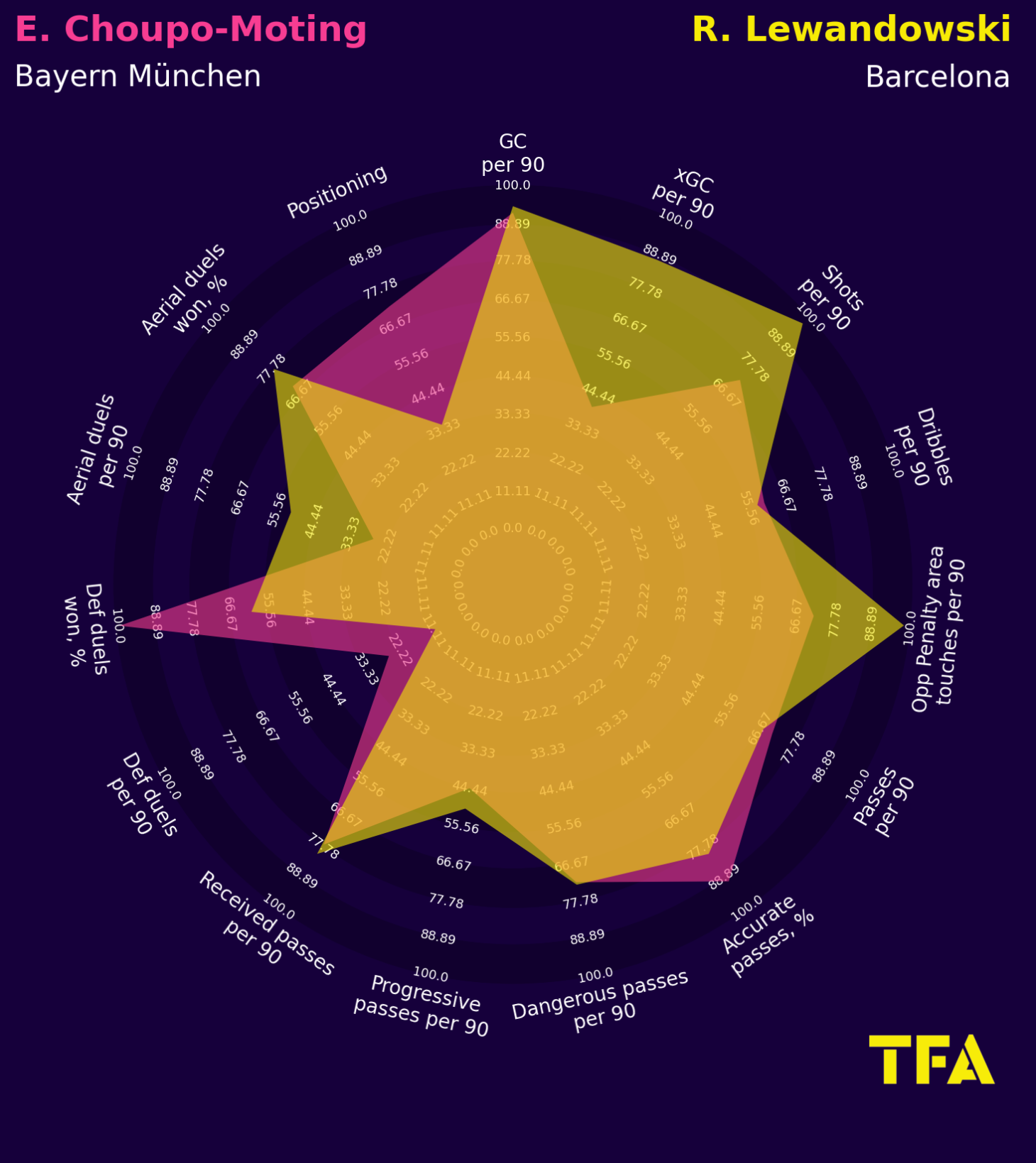 The above visual compares the radars of former Bayern striker Robert Lewandowski and current Bayern striker Choupo-Moting. The former has a great career record in the Bundesliga and is not easy to replace. But the latter has done a decent job so far this season. He edges Lewandowski in duels, positioning, and passing accuracy, while the Polish International has better stats in almost all other departments.

Eric Maxim Choupo-Moting is having a great year. He has eleven goals for Bayern across all competitions. He led his team in the World Cup and managed to cause an upset against the mighty Brazilians. The 33-year-old managed to leave his mark on the tournament with a goal to his name. Julian Naglesmann will be hoping that the centre-forward gets back into training and continues his good form for the rest of the season.

Under the microscope: How Vincenzo Grifo’s extraordinary season helped Freiburg to...