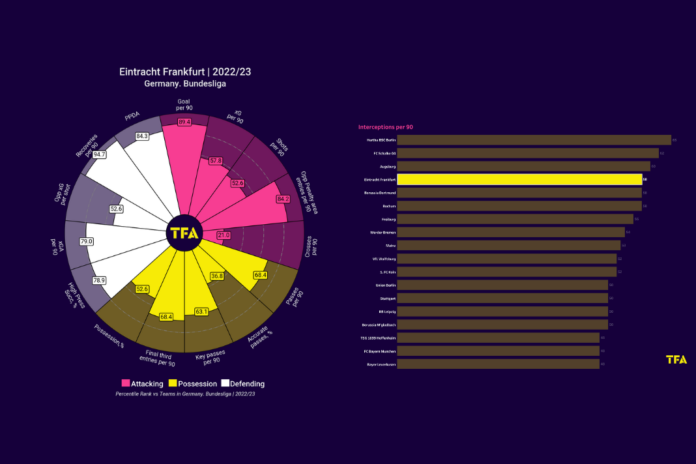 Eintracht Frankfurt have been playing at the top level for the past couple of seasons and is slowly becoming one of the biggest names in the Bundesliga. They are currently fourth in the league with 27 points from 15 matches, having won eight, drawn three, and lost four matches. They are the defending UEFA Europa League champions and defeated some big names, including Barcelona, on their way to glory. Eintracht Frankfurt have lost only one of their last nine matches and are looking in great form.

We take a look at some stats to understand how Eintracht Frankfurt is asserting their dominance in the Bundesliga. 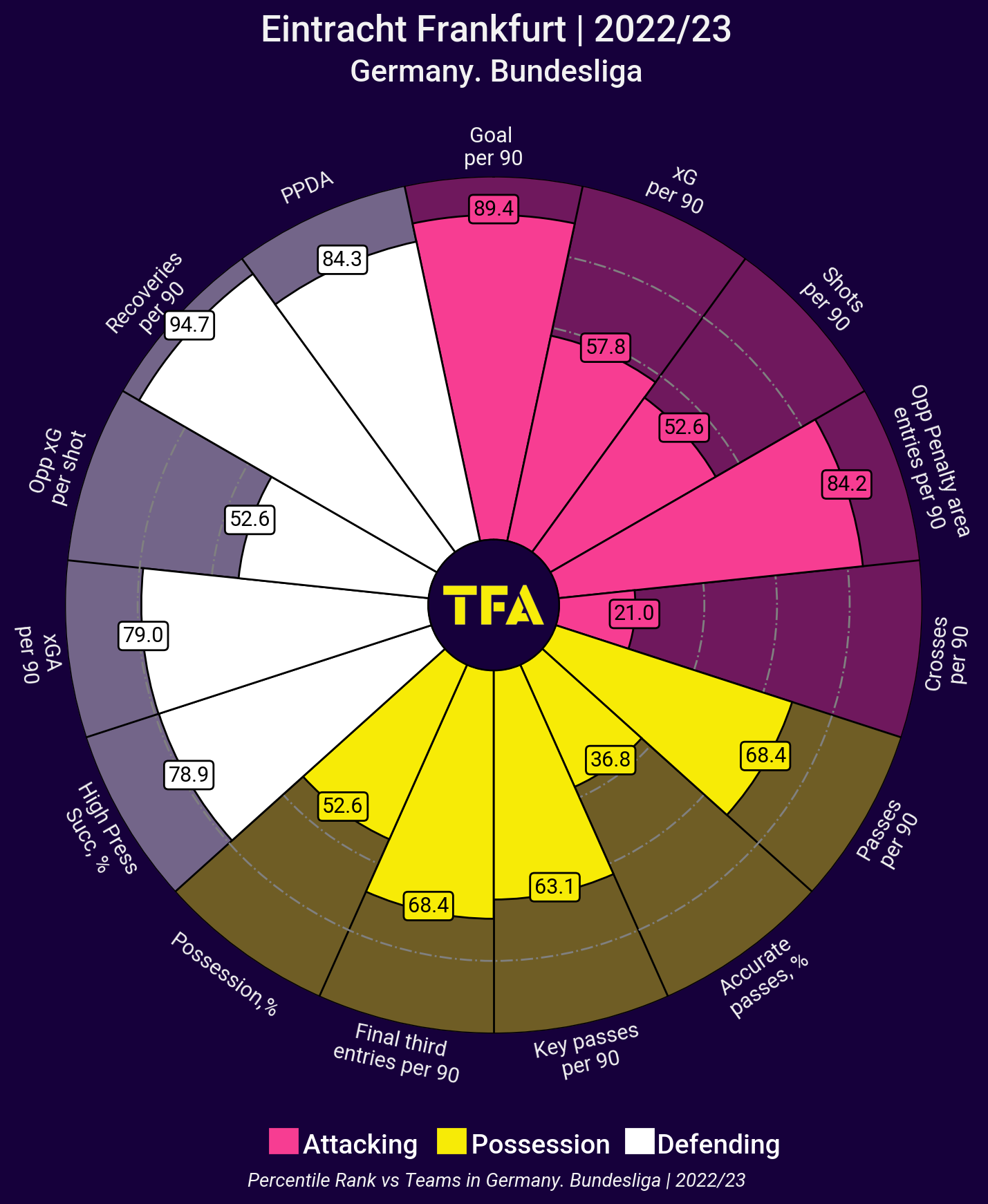 Eintracht Frankfurt have scored a total of 32 goals this season in the Bundesliga and averages 2.13 goals per game as well. Their direct approach has helped them rack up a lot of goals and makes it hard to defend against, as a single pass splits apart the defence and creates a goal-scoring opportunity. They scored 45 goals last season but by the midway mark this season, have already reached 32 goals. 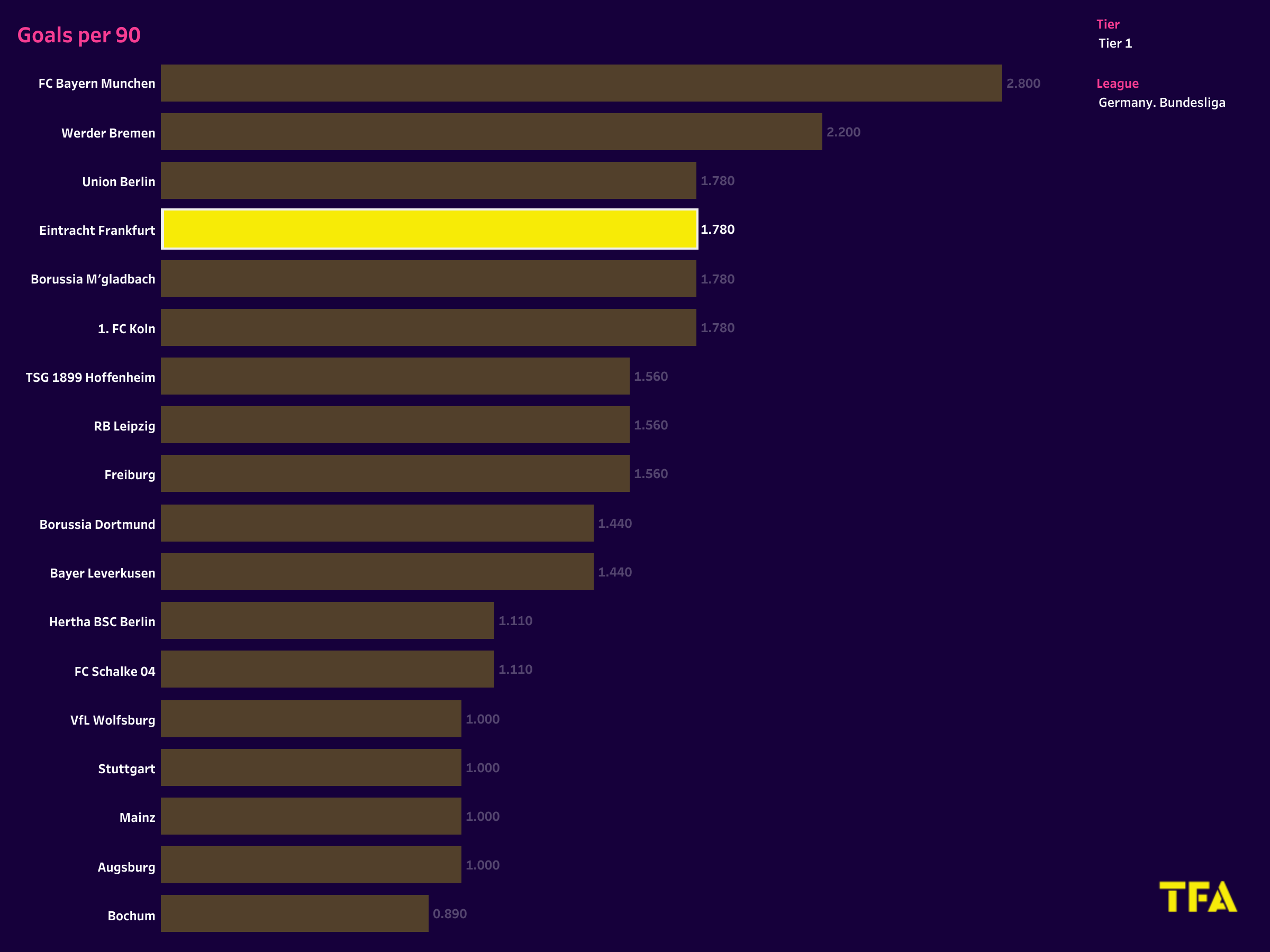 The above viz shows the goals per 90 minutes of different teams in the Bundesliga, and Eintracht Frankfurt is fourth on the list. They have scored 32 goals this season in the Bundesliga and seven in the UEFA Champions League as well. They also have the player with the most assists in the league on their team. Randal Kolo Muani, with nine assists to his name, leads the list. Eintracht Frankfurt attempts approximately 12 shots per game with a 42.33% success rate. Frankfurt also plays around 30 positional attacks per game on average, with 25% of them leading to shots. They have scored the second-most goals in the league this season and are doing well in the Champions League as well. They finished 11th in the league last season. But they look determined this season, as they are already in the top four by the midseason break.

Eintracht Frankfurt have had a decent season defensively as well. They have conceded 1.6 goals per game this season, but their attack has almost always made sure that they score enough goals. Their defence starts from their forward line, as they deploy a high defensive line and are in the top 78.9 percentile for high press success. 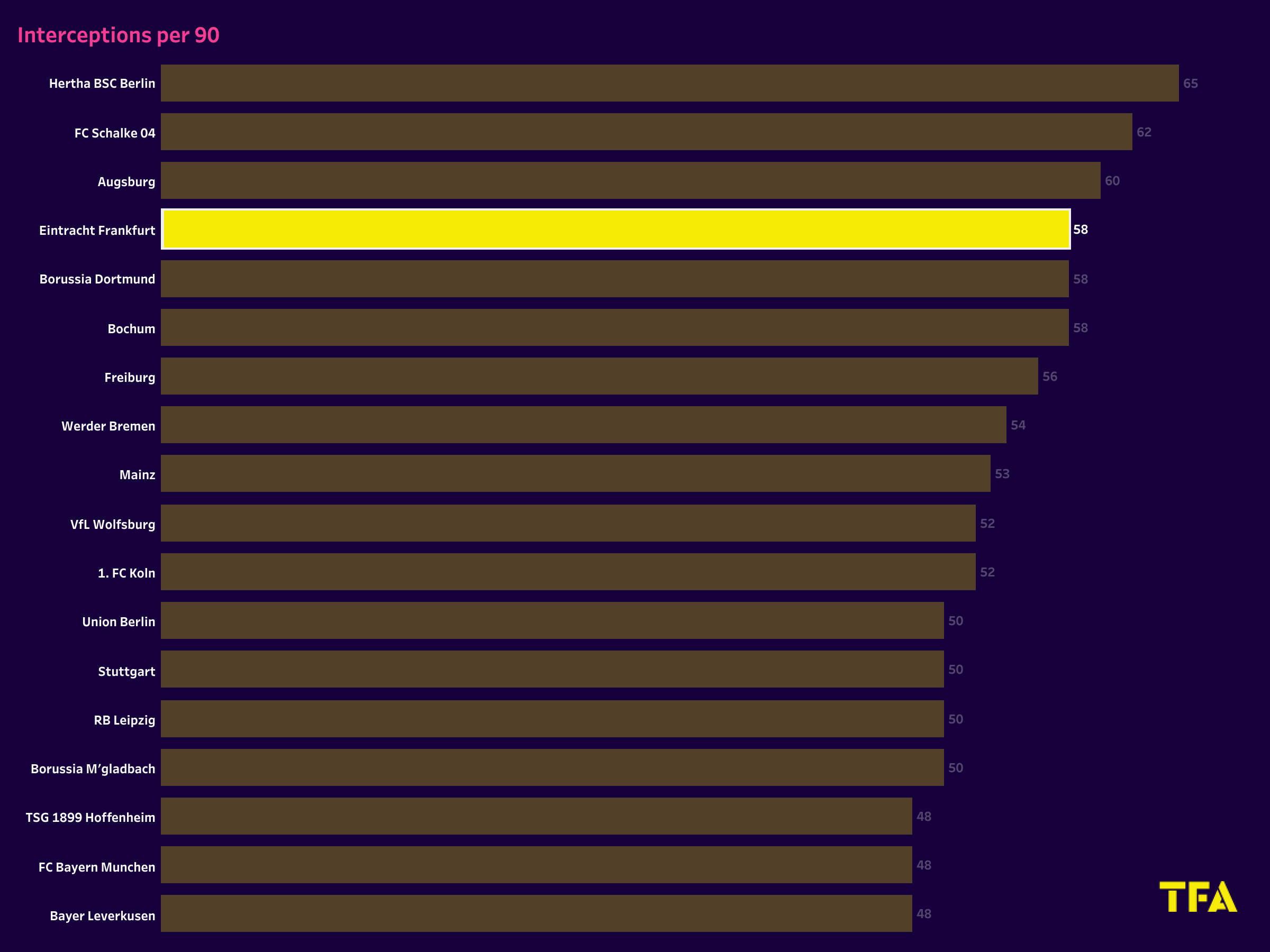 The above viz shows the interceptions made by different teams in the Bundesliga. Eintracht Frankfurt makes around 58 interceptions per 90 minutes and is fourth on the list as well. They also make around 67.73 defensive duels per game and win 61.2% of them. Frankfurt makes 34.93 aerial duels per game with a success rate of 42.7% as well. Their opponents enjoy an average of 9.6 shots per game, with 40% of them on target as well. But their defence managed to stop some shots at the beginning, as they blocked a lot of the shots as well. 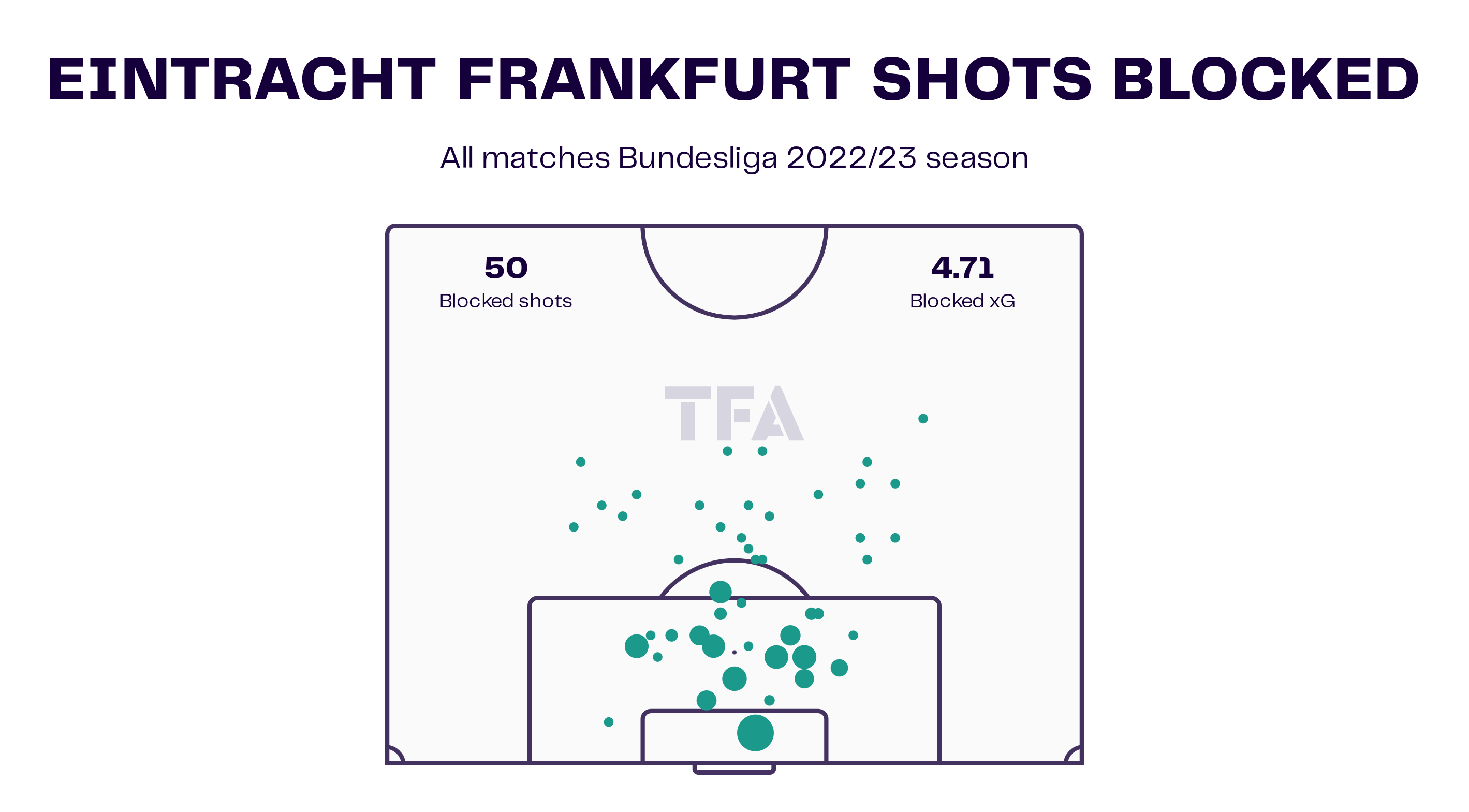 So far this season, Eintracht Frankfurt has stopped 50 shots. Their goalkeeper Kevin Trapp is a brilliant presence in front of the goal and has made some crucial saves as well. These saves have helped them concede fewer goals and not let goal-scoring opportunities arise. They have conceded 24 goals this season. They conceded 49 goals last season and have already conceded half of that this season. Even though they have almost always scored more than they conceded, their coach, Oliver Glasner, will be urging them to improve their defence.

Eintracht Frankfurt have been on the rise for some time now, and their Europa League win and successful run in the Bundesliga are proofs of a new strength asserting its position in Germany and Europe. Their rise is not surprising considering their dedication and work rate. Their high press and intensity have helped them gain a position of strength and they will be looking to continue working on their growth.

Who Will Be Bundesliga’s 2023 Golden Boot?

Under the microscope: How Noussair Mazraoui is proving to be Bayern’s...