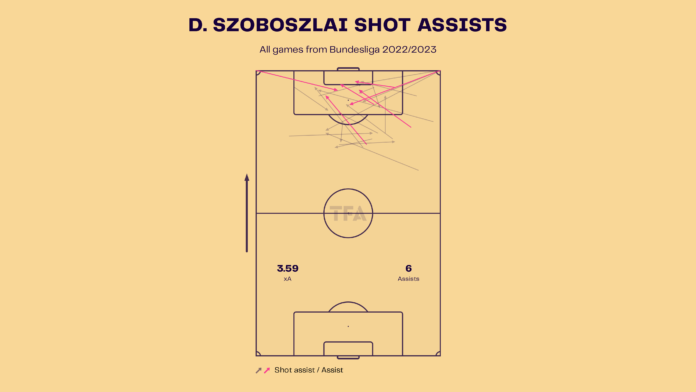 RB Leipzig has many talented youngsters in their squad, and one of the rising stars is Hungarian Dominik Szoboszlai. The 20-year-old, who joined the Bundesliga last season from the Austrian Bundesliga, is having an impressive season. He is slowly becoming one of the key players under Marco Rose. The youngster has scored once and assisted six further goals in the Bundesliga. Moreover, he has a goal and two assists in the Champions League, two assists in the DFB Pokal, and one assist in the DFL Super Cup. With some key players looking to leave Leipzig, Szboszlai will have an important role to play in their title race. Therefore, we look at some stats to understand how the youngster is becoming a key player for Marco Rose.

Dominik Szoboszlai has made 13 appearances in the Bundesliga this season, starting 12 and coming on as a substitute in one match. He has one goal and seven assists to his name and is looking sharp. 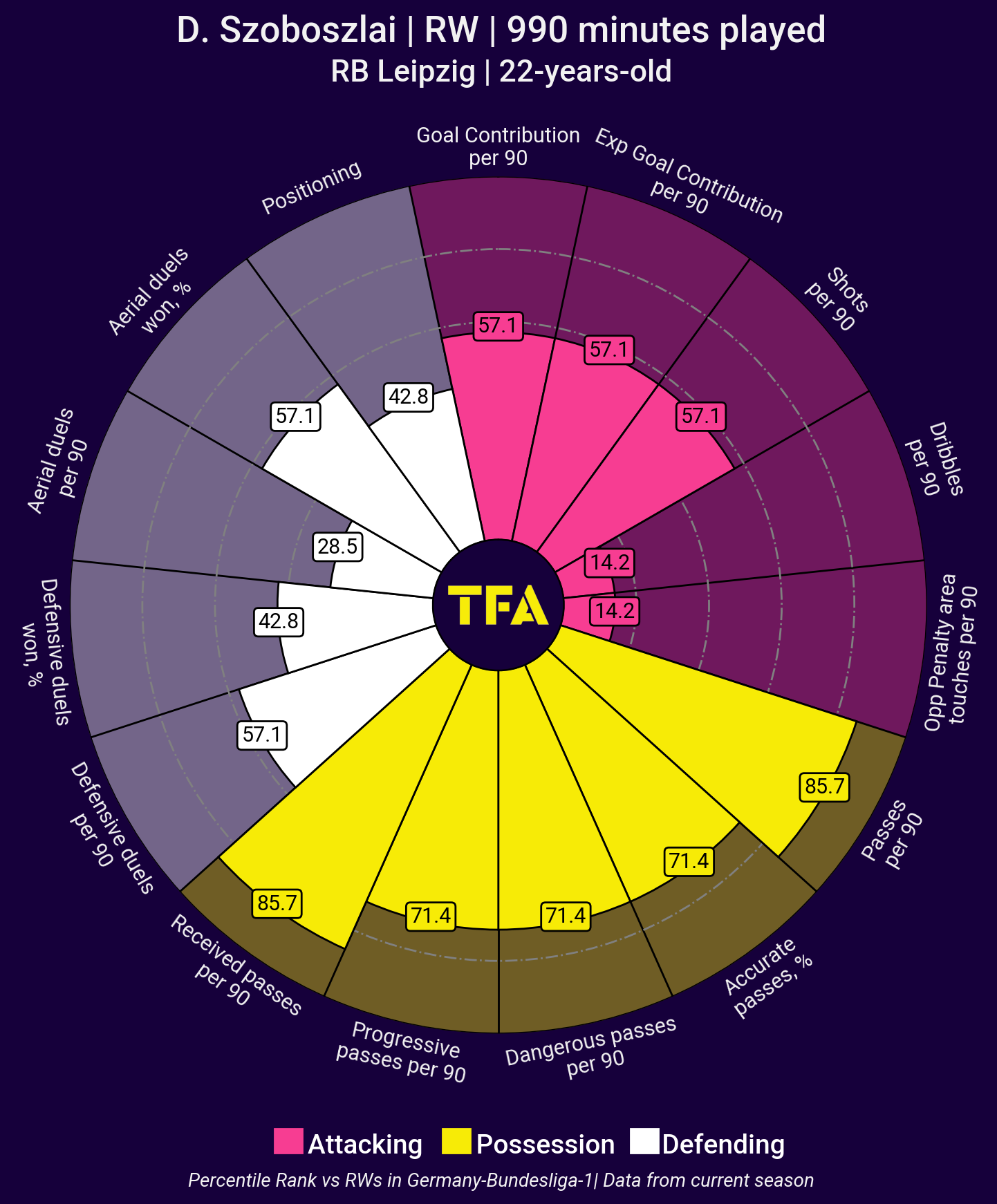 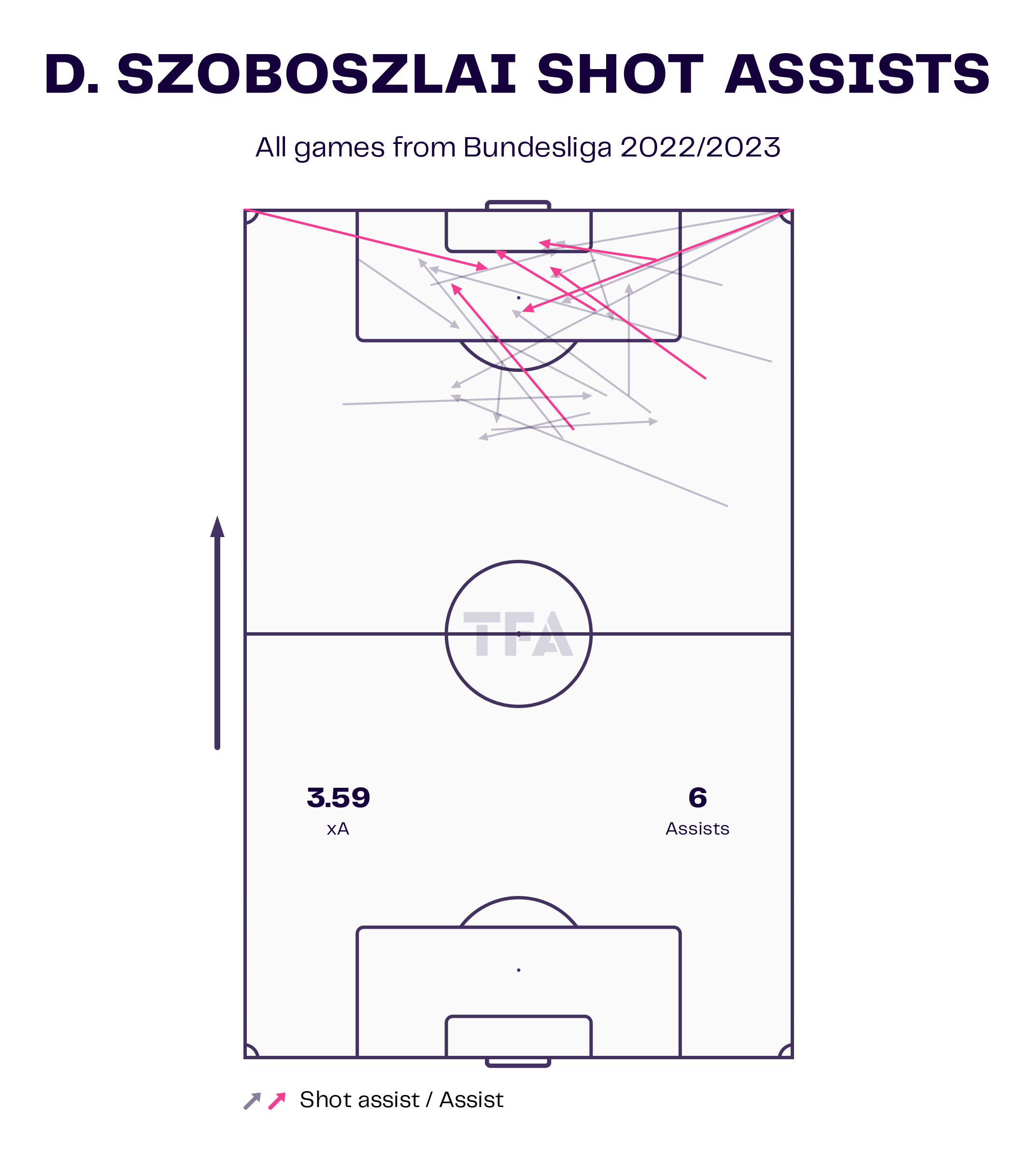 The above visual shows the shot assists of Dominik Szoboszlai in this Bundesliga season. He has made seven assists in the Bundesliga and makes around 2.18 shot assists per game. He has also attempted 1.64 shots per game with a 61.1% success rate. Szoboszlai is a clever player who knows when to release the pass to find a player. He had eight assists in 31 matches last season. But this season, with less than half the number of matches, he has one fewer assist and is in real form. 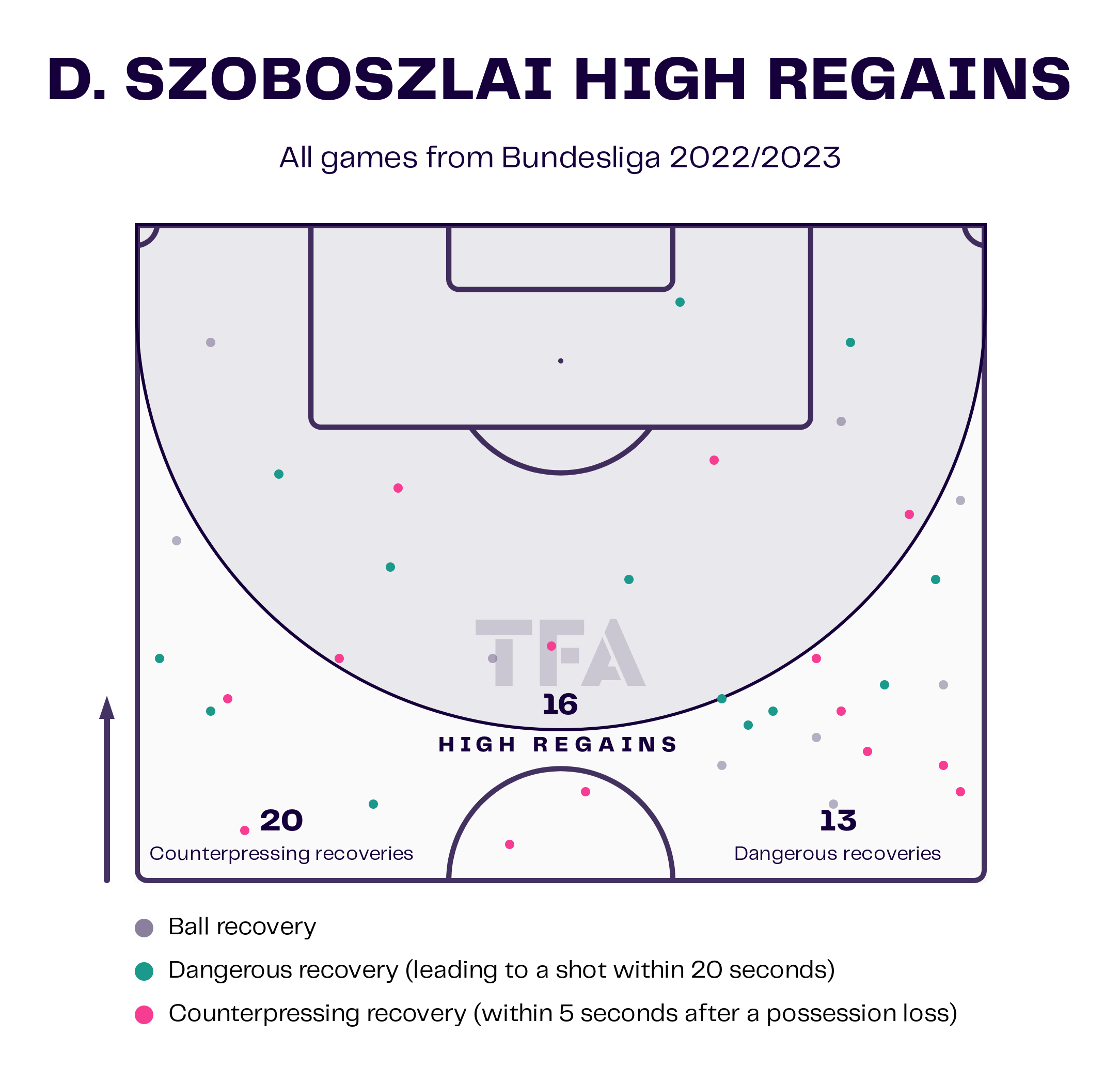 Another way in which Szoboszlai contributes to RB Leipzig is through high regains. Pressing is an important part of Leipzig’s method of playing the game, and he does it well. He has made 20 counter-pressing recoveries and 13 dangerous recoveries so far this season. These recoveries help a team like Leipzig, which has quick players, launch quick counter-attacks. Szoboszlai recovers the ball around 6.73 times a game, with 59.5% of these recoveries in the attacking half. 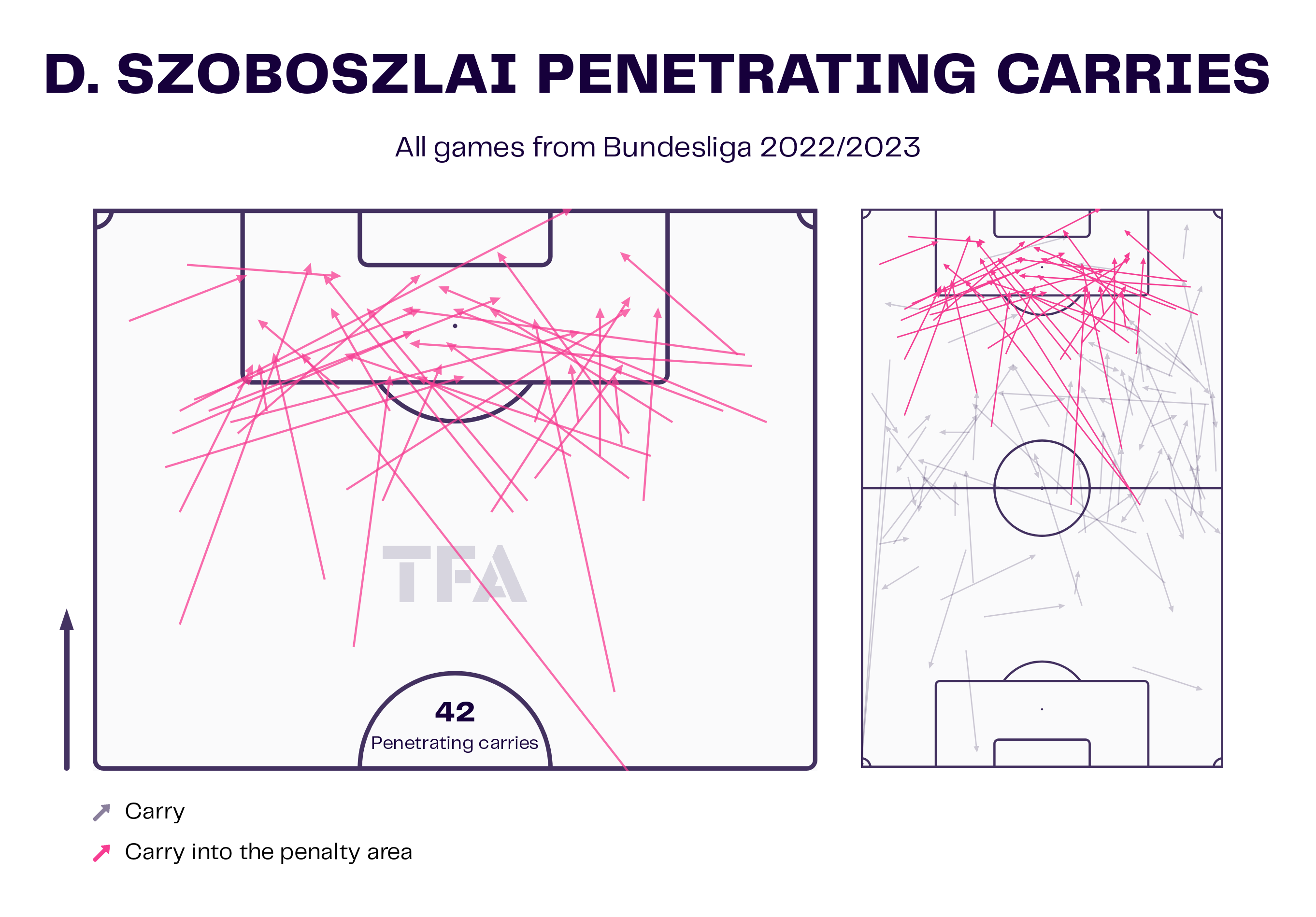 The above visual shows the penetrating carries made by Dominik Szaboszlai in this season of the Bundesliga. He has made 42 penetrating carries with his fast dribbling. He is quick, has great ball control, and is easy to watch as well. With an average of 3.27 dribbles per game and a 77.8% success rate, Szoboszlai poses a constant threat to opponents. His dribbling is a delight to the eye and has helped Leipzig immensely. 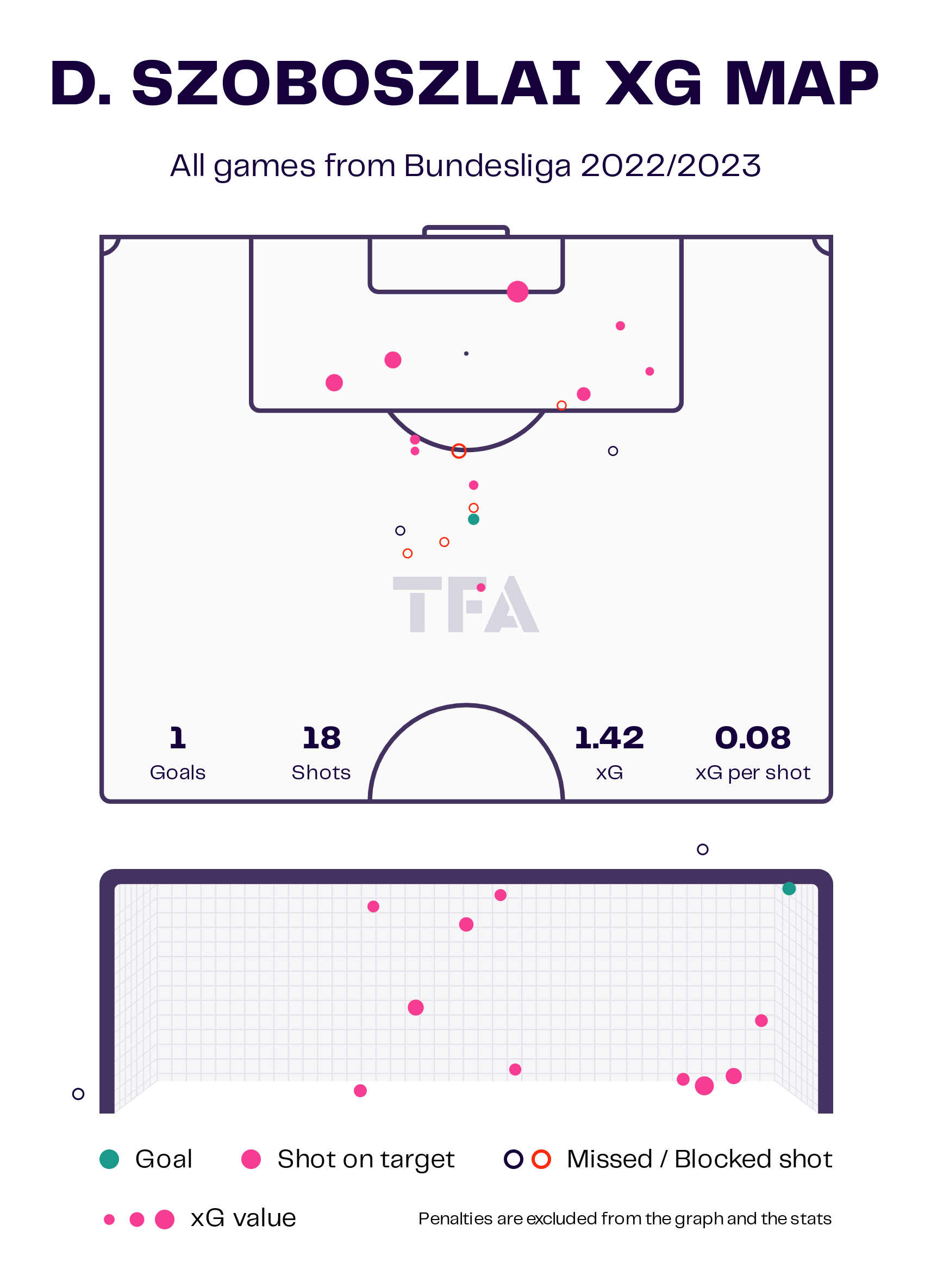 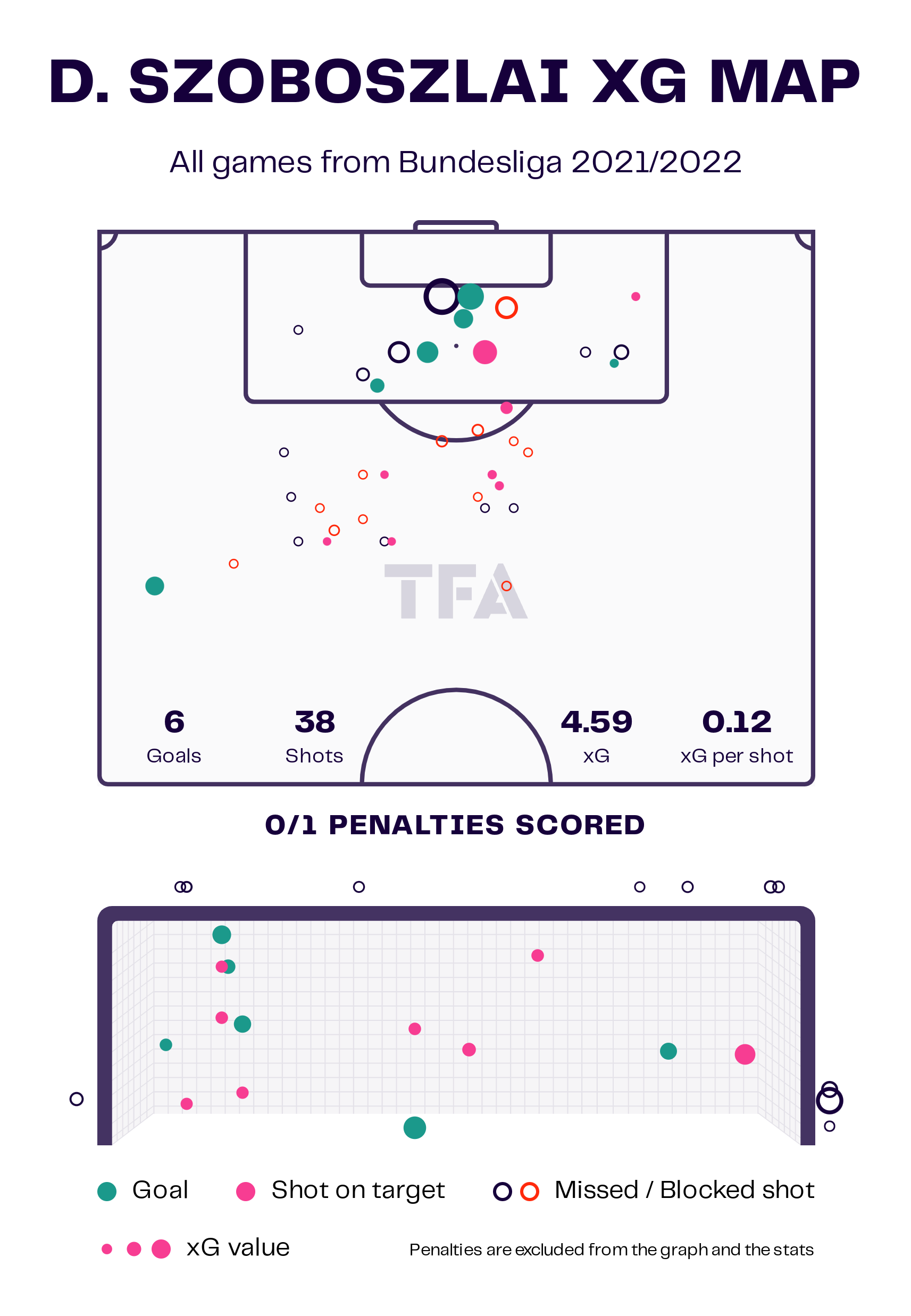 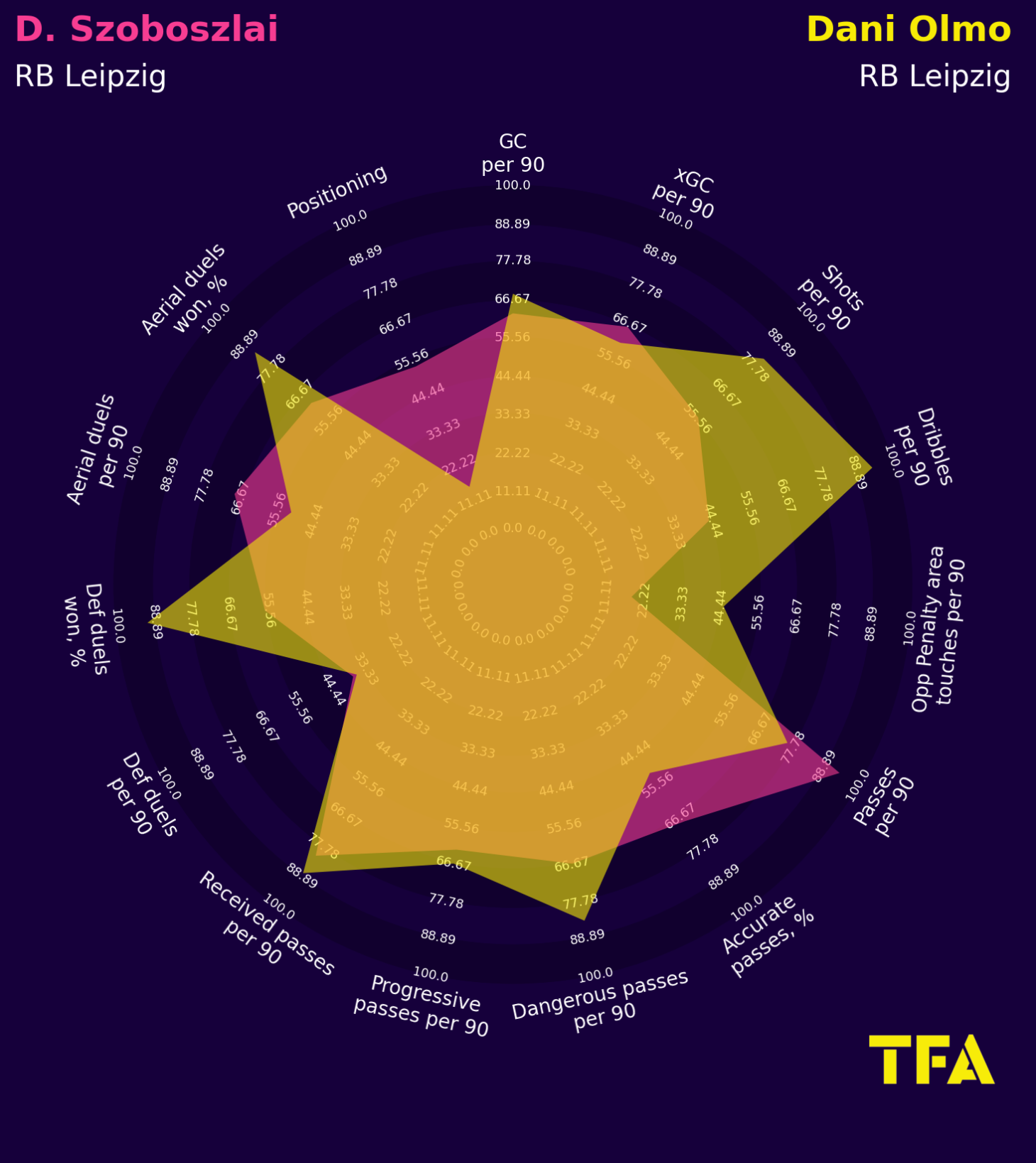 The above visual compares the radars of two of Leipzig’s bright talents, Dominik Szoboszlai and Dani Olmo. Szoboszlai has better stats in passes, accurate passes, aerial duels, and positioning, while Olmo takes the upper hand in almost every other parameter. Olmo has better stats in shots, dribbles, duels, and dangerous passes. These two will have some work to do playing together as their key man, Christopher Nkunku might be leaving the club.

Dominik Szoboszlai was a bright spark from Salzburg, and he has adjusted well to the German Bundesliga. He has managed to create a real impact whenever he is on the pitch and is growing into one of the most important players in the Leipzig midfield. Coach Marco Rose will be hoping that the youngster is well-rested during the World Cup break and ready to go when the season restarts.

Under the microscope: The Austrian who is off to a dream...