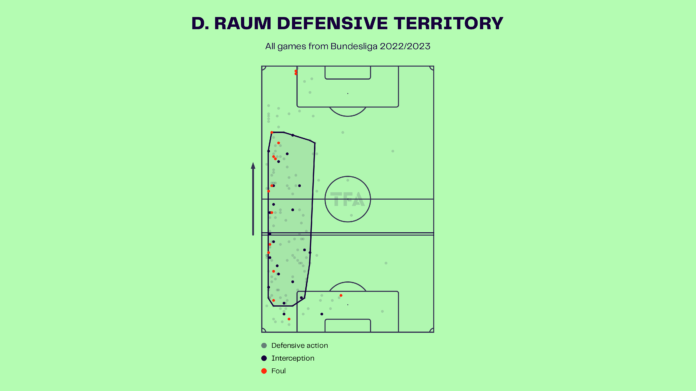 RB Leipzig have produced many talented players in recent times. One such player who has done well for Leipzig in the Bundesliga is their left-back David Raum. The 24-year-old is a dynamic presence on the left flank with his runs and crosses. His good performances earned him a place for Germany in the World Cup. He played all three group matches for Germany and was particularly impressive against Spain. With a goal and an assist in 14 matches, Raum plays an important role for Leipzig. Therefore, we take a look at his stats from this season to understand how his first season has gone for Leipzig.

David Raum has made 14 appearances this season, starting 12, and coming off the bench in two matches. He has a goal and an assist to his name in the league and has been impressive. 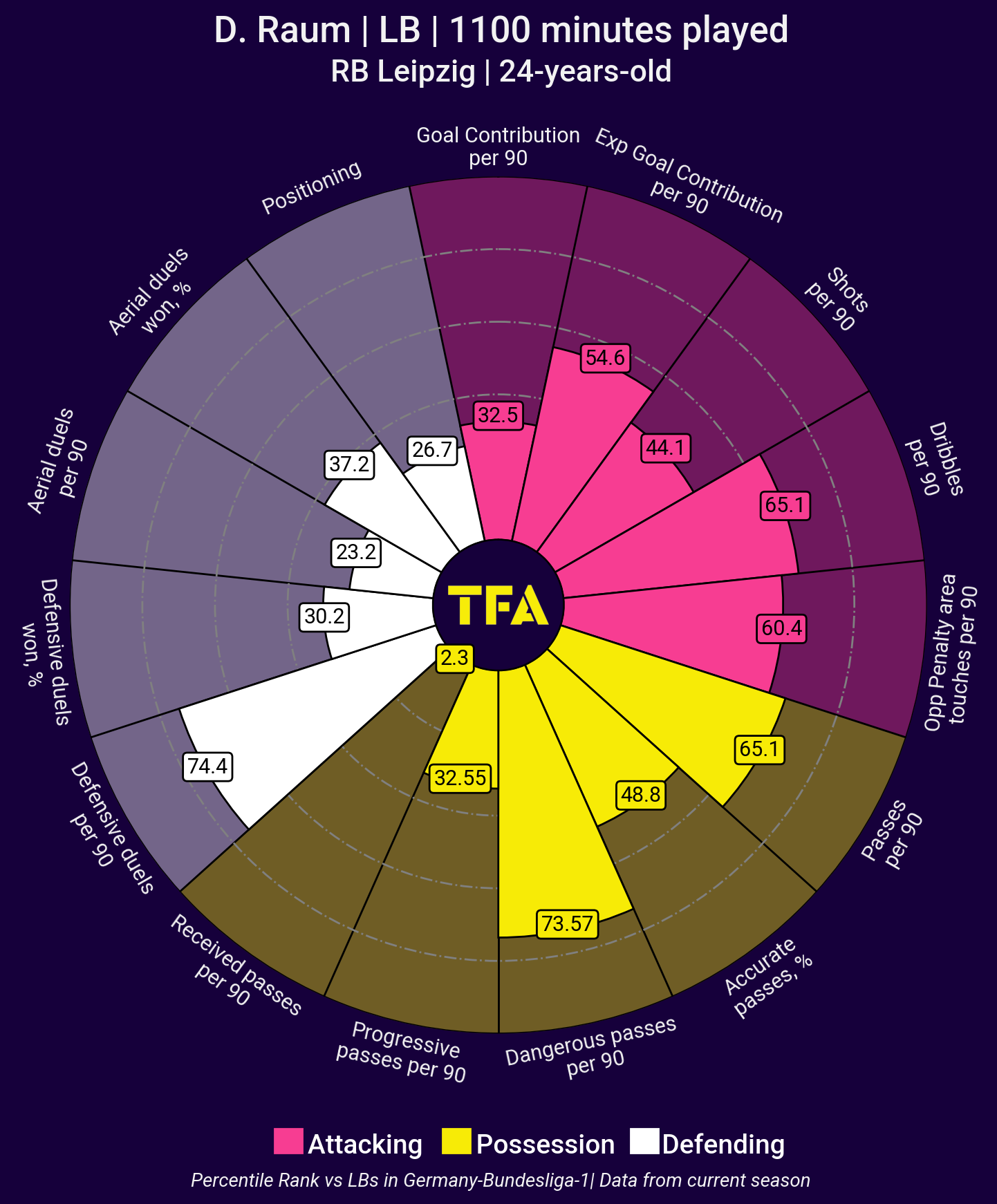 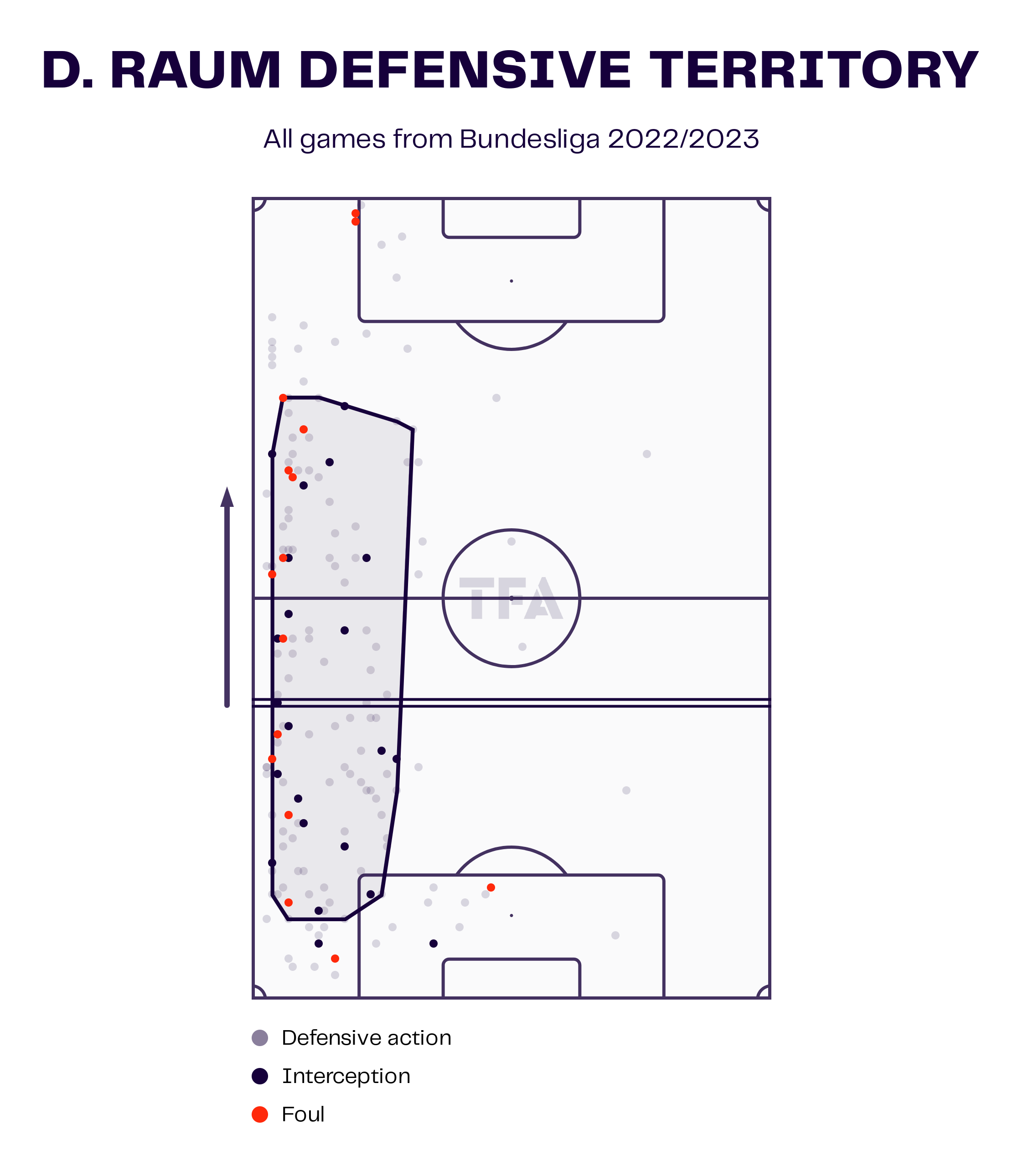 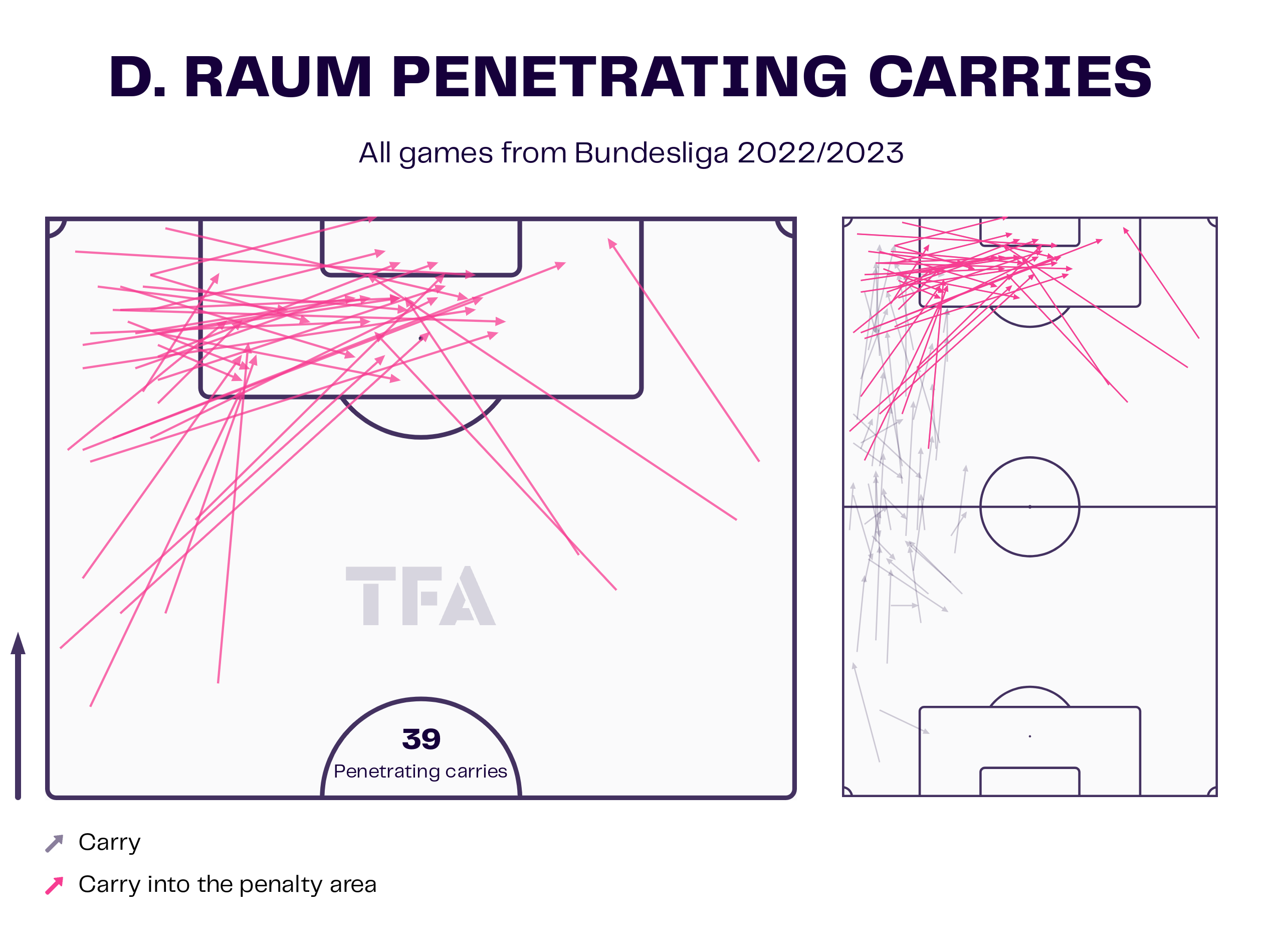 The above visual shows David Raum’s penetrating carries from the current Bundesliga season. With an average of 2.05 dribbles per game and 48% success, Raum has made 39 penetrating carries this season. He is fast and gets forward very often, providing an extra attacking option for Leipzig. Apart from these dribbles, Raum also makes around 1.23 progressive runs per game. 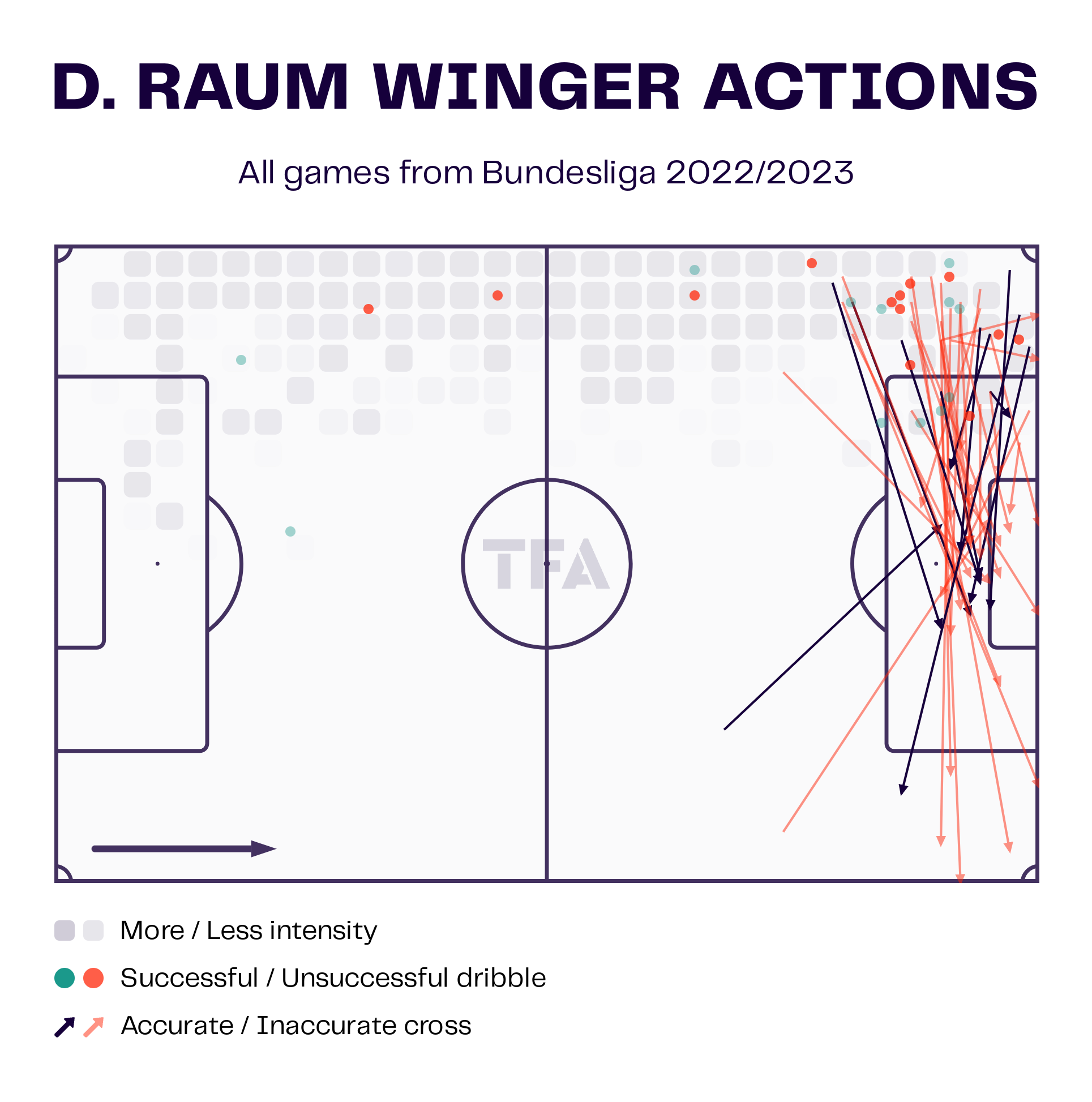 As an overlapping left-back, Raum effectively plays as a left winger. With his dribbles and crosses, Raum creates good attacking threats through the left wing. Raum, who positions himself in the offensive zone more often than not, plays around 4.45 crosses per game with 20.4% success. He also takes on players and makes around 4.34 offensive duels per game with a win rate of 50.9%. Leipzig has some good forwards who can make head crosses, but these crosses prove to be very dangerous. 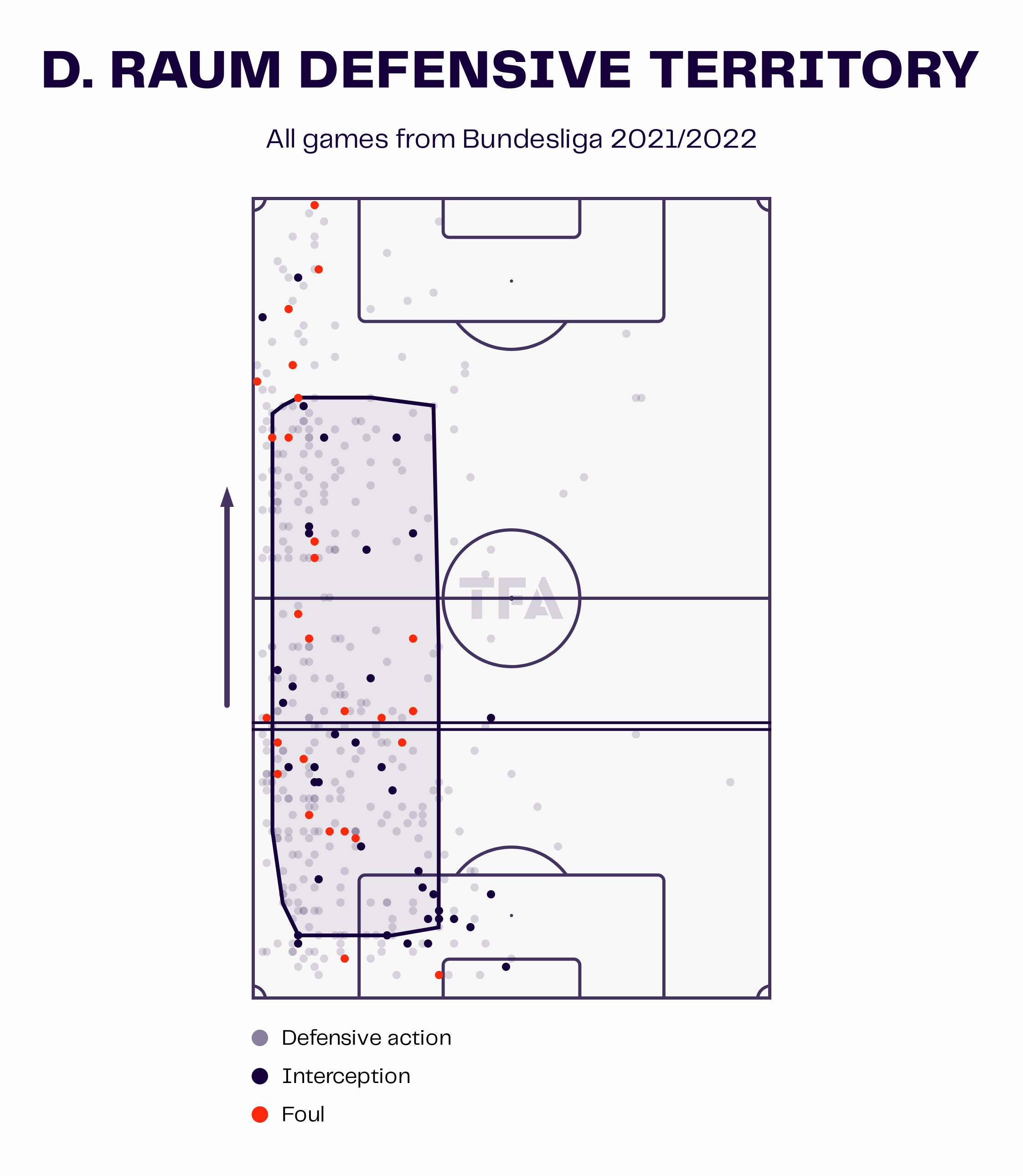 Last season, David Raum played in the Bundesliga, but for another club. He was brought in from Hoffenheim at the start of the season impressed by his performance for them. In the 2021/22 season, Raum made around 5.71 defensive duels per game with 63.1% success and an average of 2.08 aerial duels per game with 41.2% success. As for interceptions, he made around 3.24 interceptions per game last season, a figure that has seen a rise this season. 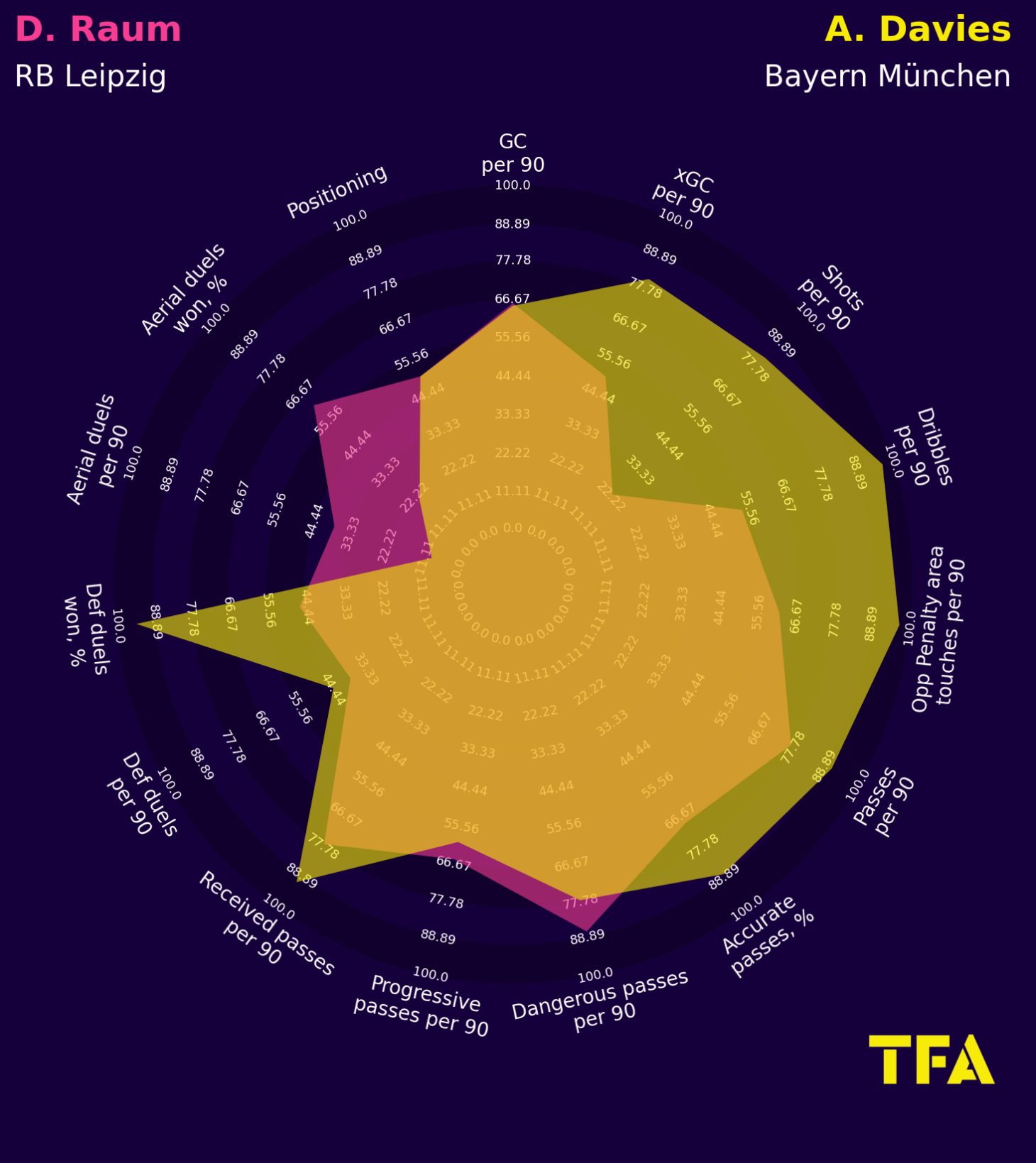 David Raum contributes to both Leipzig’s offence and defence equally. And therefore, the odds in the 1×2 market are likely to go up a bit. While the underlines are expected to rise even by a small margin as he provides some defensive quality to the backline,

David Raum’s move to RB Leipzig this summer can be called as a success looking at his performance so far for the club. He has also produced some good performances for his national team when called upon. Raum will be raring to go again as the Bundesliga season is about to restart.