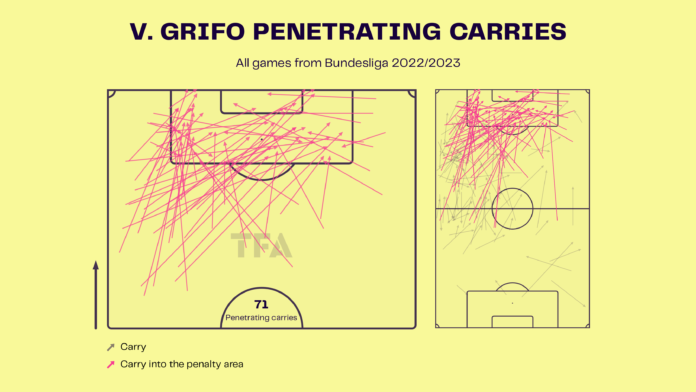 SC Freiburg are sitting comfortably in the second position in the Bundesliga this season and have scored 19 goals this season. Out of these 19, nine were scored by Vincenzo Grifo. The 29-year-old winger has had a stellar season and has already equalled his goals tally from last season. He has nine goals and two assists to his name from 15 matches and has single-handedly scored almost half of the goals scored by his team.

We look at some stats to understand how Grifo’s excellent form has helped Freiburg in their rise to the second position.

Vincenzo Grifo has played 15 matches in the Bundesliga, starting 14 and coming off the bench in one. The 29-year-old has 11 goals and three assists across all competitions this season. His goal contributions were crucial for Freiburg, as the entire team scored almost the same number of goals as him. 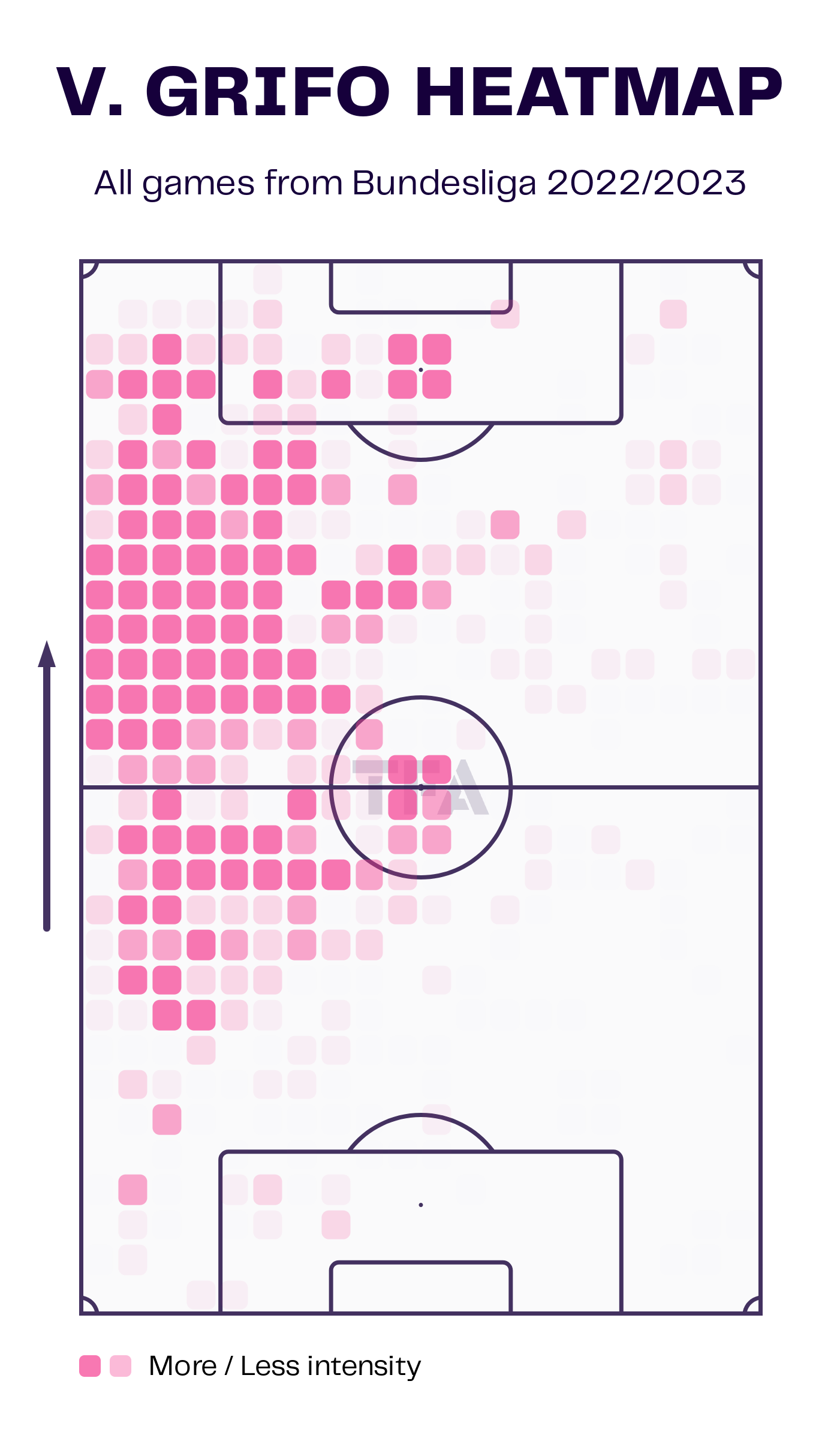 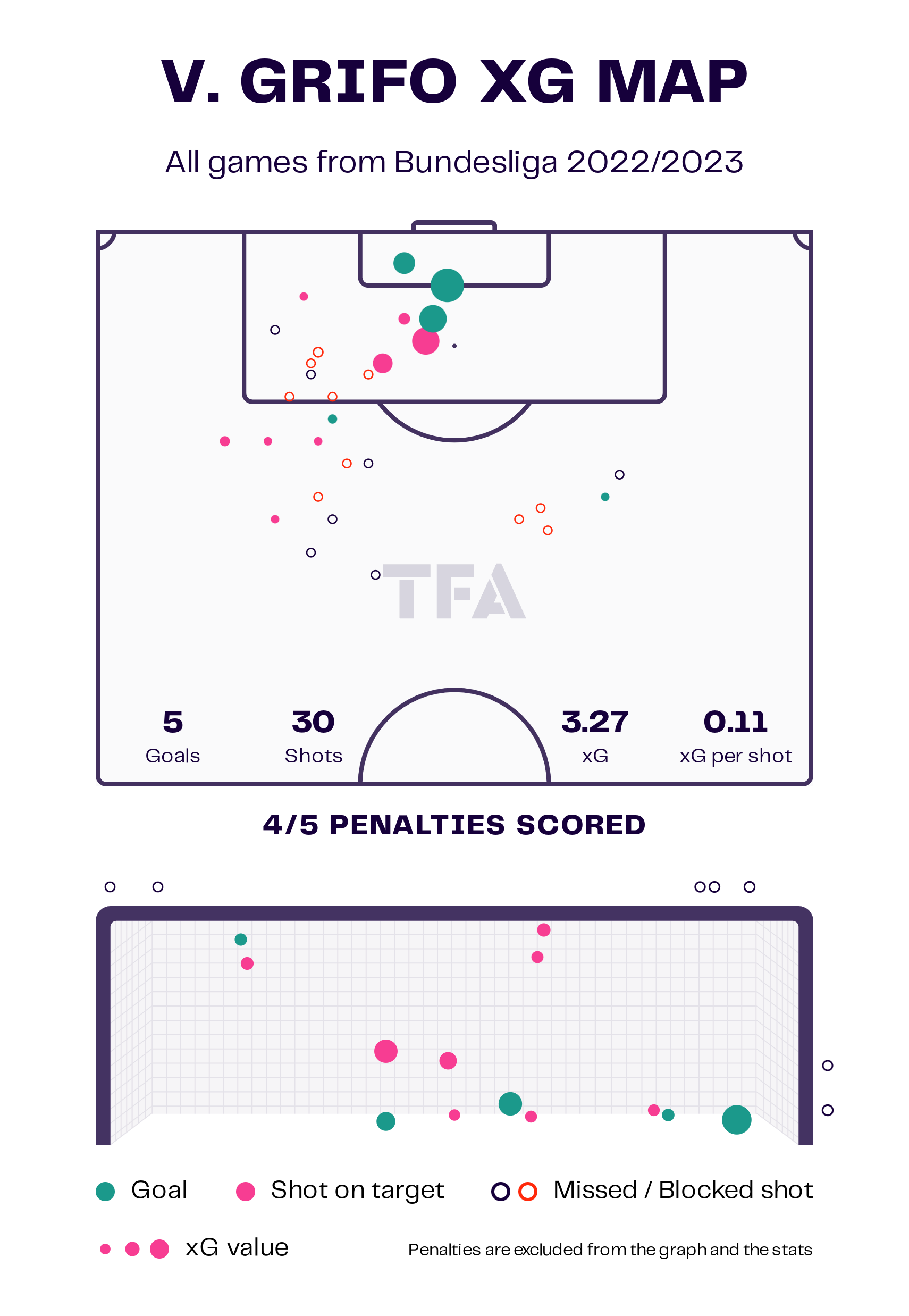 The first viz shows the heat map of Vincenzo Grifo in the Bundesliga this year. We can observe how he usually stays in the attacking half and then explodes through the left wing. He has brilliant ball control and uses his dribbling skills to get past players and create scoring opportunities. Grifo also combines with players well to interchange passes, which makes him hard to defend against. He is a very attacking player and gets into the box often. He has an average of 2.18 touches in the penalty box.

The second visualisation shows the xG map of Vincenzo Grifo. He has attempted 30 shots, with 14 of them inside the penalty box. Out of these 30 shots, 13 of them were on target. He has scored five goals from open play and four from spot kicks as well. He usually stays wide on the flank, and the angle therefore lessens the xG of his shots. Grifo has an average xG of 0.11 for each shot. 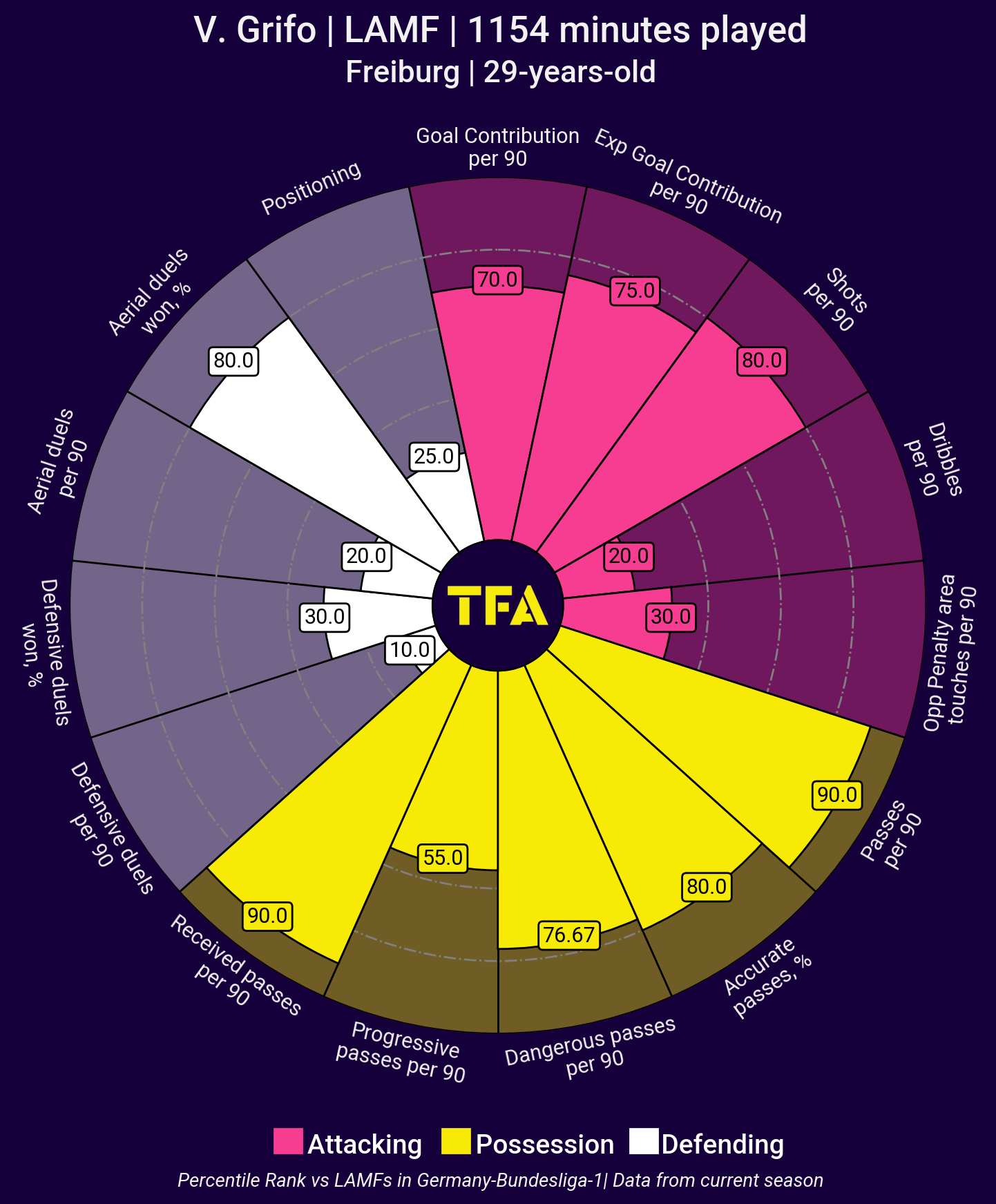 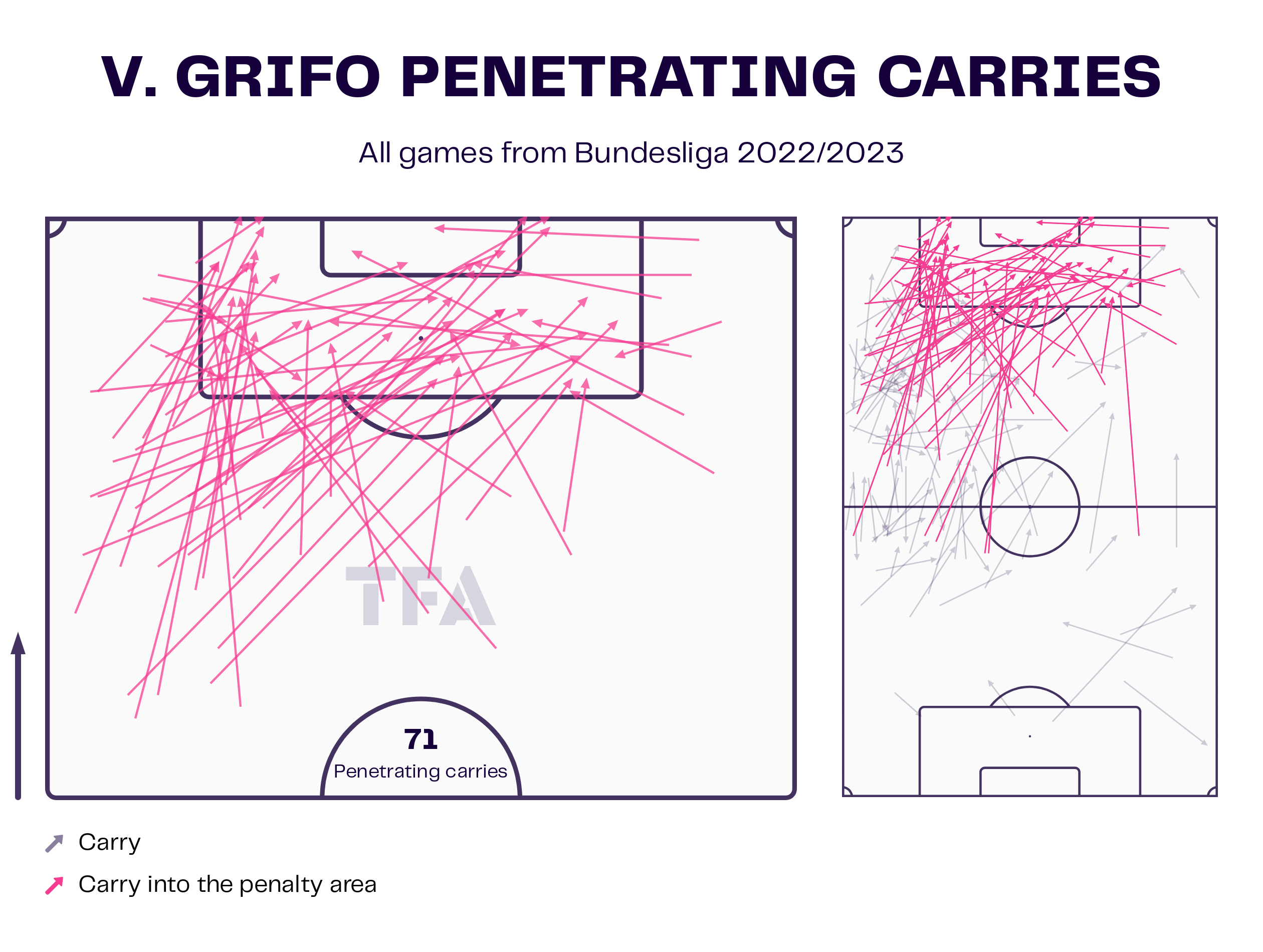 Another quality of Vincenzo Grifo is his dribbling. His ability to run with the ball at his feet is very impressive, and he goes past players with ease. He makes an average of 4.37 dribbles per game with 57.1% success and makes around 1.87 progressive runs as well. We can observe from the visualisation that he likes to cut inside and get into a more central area from the flanks. Grifo also attempts an average of 8.19 offensive duels with a 45.7% success rate. 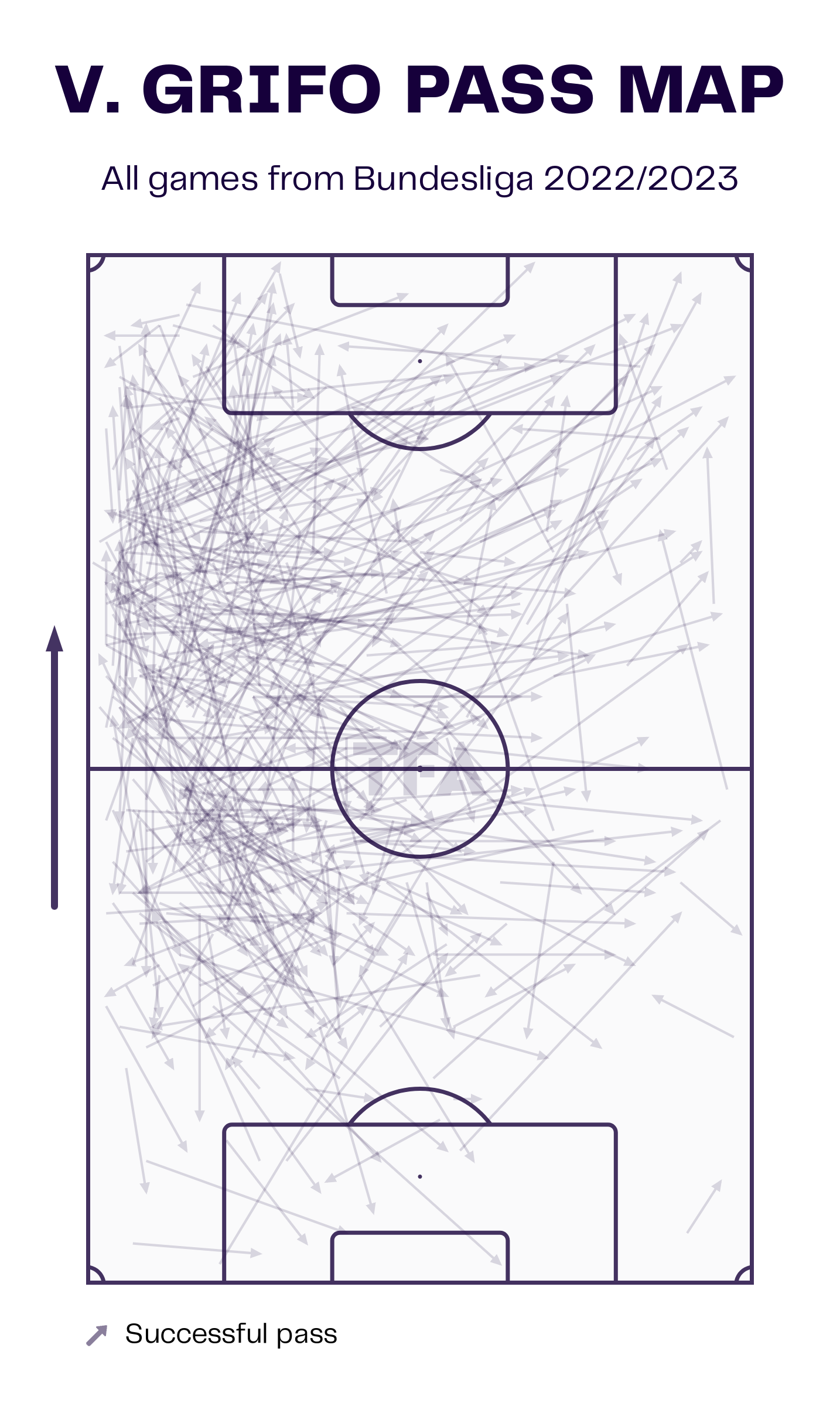 The above visualisation depicts Vincenzo Grifo’s pass map. He has a passing accuracy of 81.8% and averages around 45.39 passes per game. He is ranked in the top 90 percentile for passes per game and also plays around 6.79 passes into the final third with a success rate of 61.2%. Grifo also puts some passes into the penalty box, 5.3 per game. He combines well with other players and contributes toward goals.

Vincenzo Grifo is in amazing form and is going under the radar a bit. His nine-goal tally accounts for almost half of his team’s goals. If he keeps going in the same fashion, he might stand a chance to win the Kicker-Torjägerkanone, which is awarded to the player with the most goals.

Under the microscope: How Matthias Ginter has already become the spine...