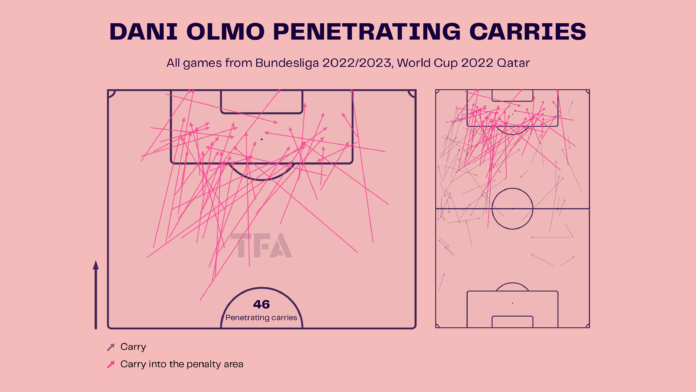 Daniel Olmo is a regular starter for Spain in international matches under Luis Enrique. He possesses a unique set of skills and has played a crucial part in Spain’s success in recent years. However, his name often gets overshadowed by the other big names on the team. Olmo has a cool, calm presence on the ball and is a creative force in the Spanish final third. He is an intelligent playmaker who is also capable of producing moments of individual brilliance. He plays for RB Leipzig in the Bundesliga, where he also gets overlooked by the other stars.

We look at some stats to understand why Dani Olmo deserves more recognition.

Daniel Olmo has played ten matches this season in the Bundesliga, starting seven and coming off the bench in three matches. He has only scored once this season and assisted others twice. He was forced to sit out for some matches due to an injury. Olmo has started two games this World Cup and has a goal and an assist to his name. 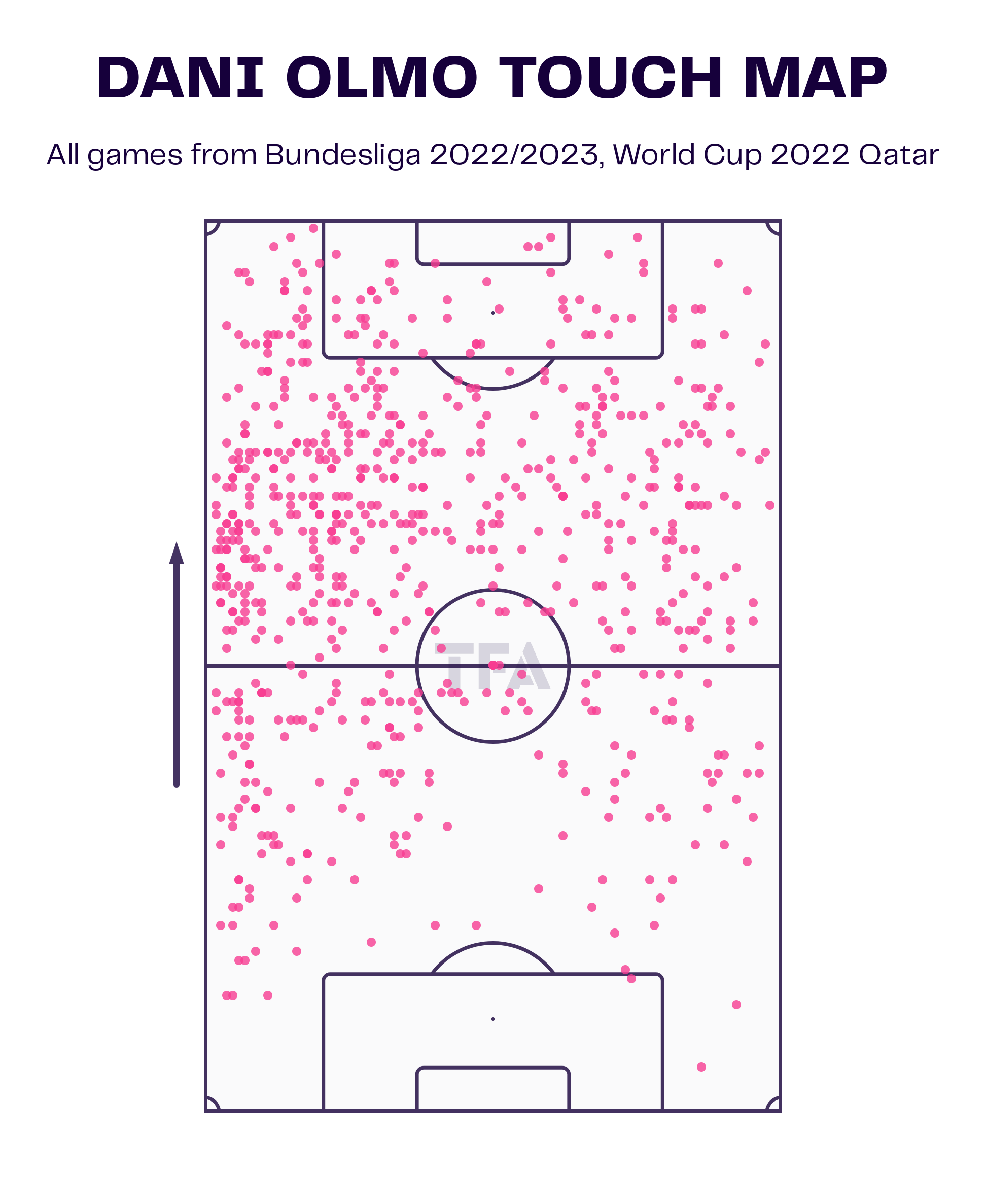 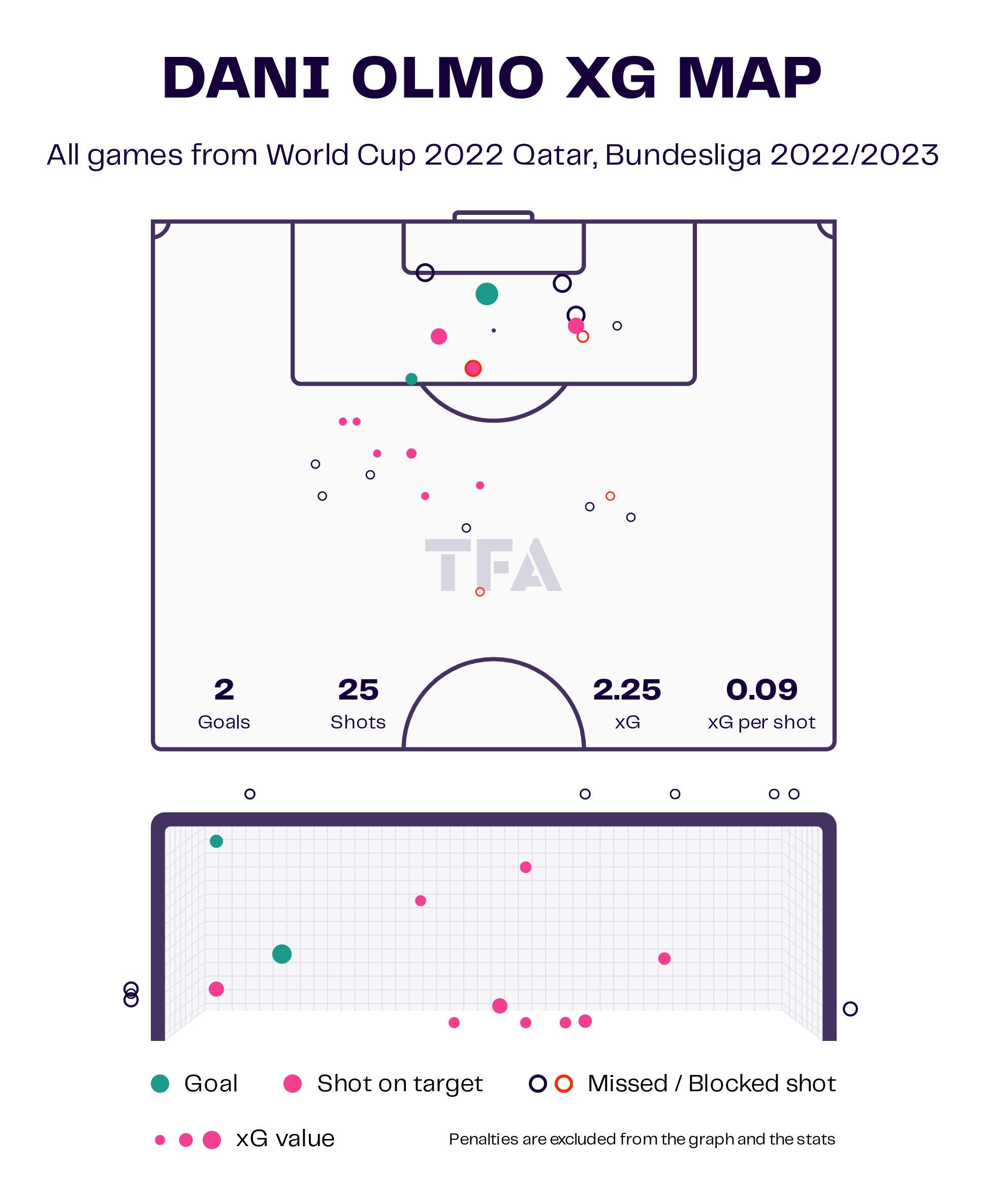 The first visualisation shows the touch map of Daniel Olmo. He plays both as a winger and as an attacking midfielder. Because of his versatility, coaches can put him in any position and be confident that he will perform well. Olmo is a creative player with good skills overall and can produce chances out of nothing. He can both dribble and combine well with other players to create attacking opportunities. He also has an average of 3.04 touches in the penalty box.

The second visualisation shows the xG map of Dani Olmo this season. He has scored three goals for his club across all competitions and once for Spain in the World Cup as well. He attempted 25 shots, out of which 11 were from inside the penalty box. He  has been an important part of the Spanish national team and poses a threat every time he gets the ball. 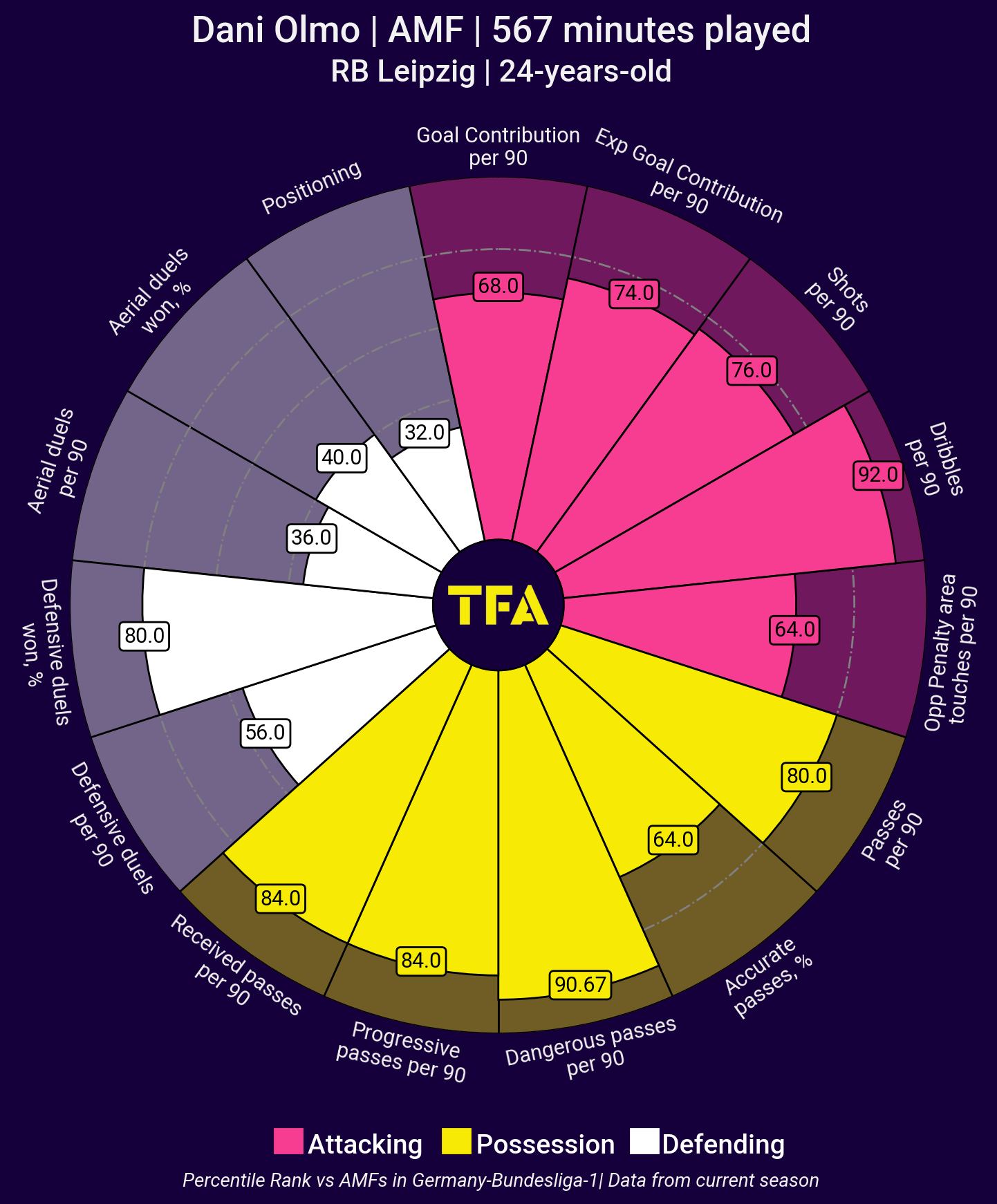 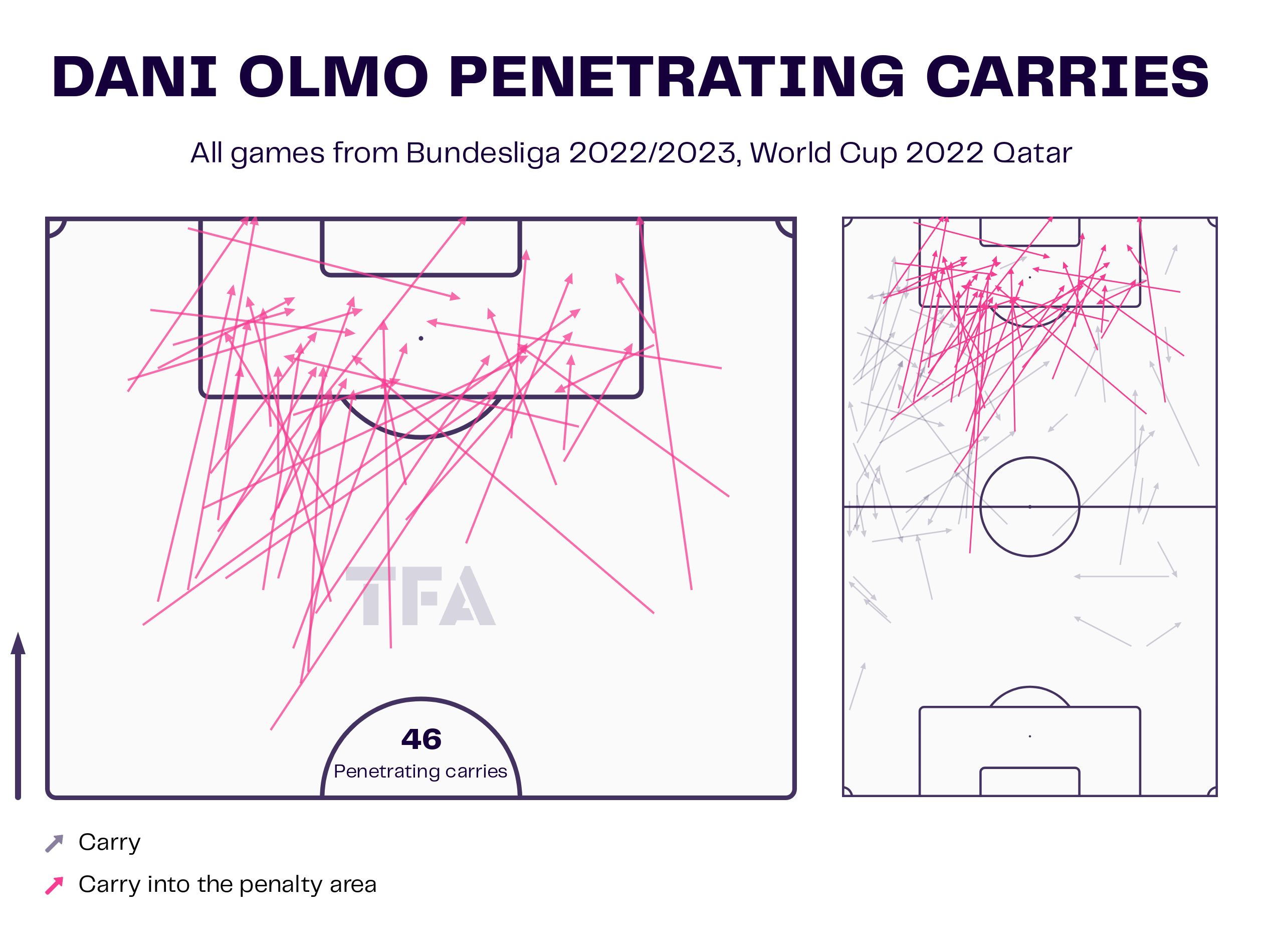 The above viz shows the penetrating carries made by Daniel Olmo. He is not one of the dashing dribblers like Vinicius Jr. or Kylian Mbappe, but his close control and technical ability help him get past players easily. He can pick up the ball from the midfield and dribble past players, combining with other forwards and creating danger. Olmo makes an average of 6.87 dribbles per game with 49.5% success. Moreover, he makes an average of 1.91 in progressive runs as well. 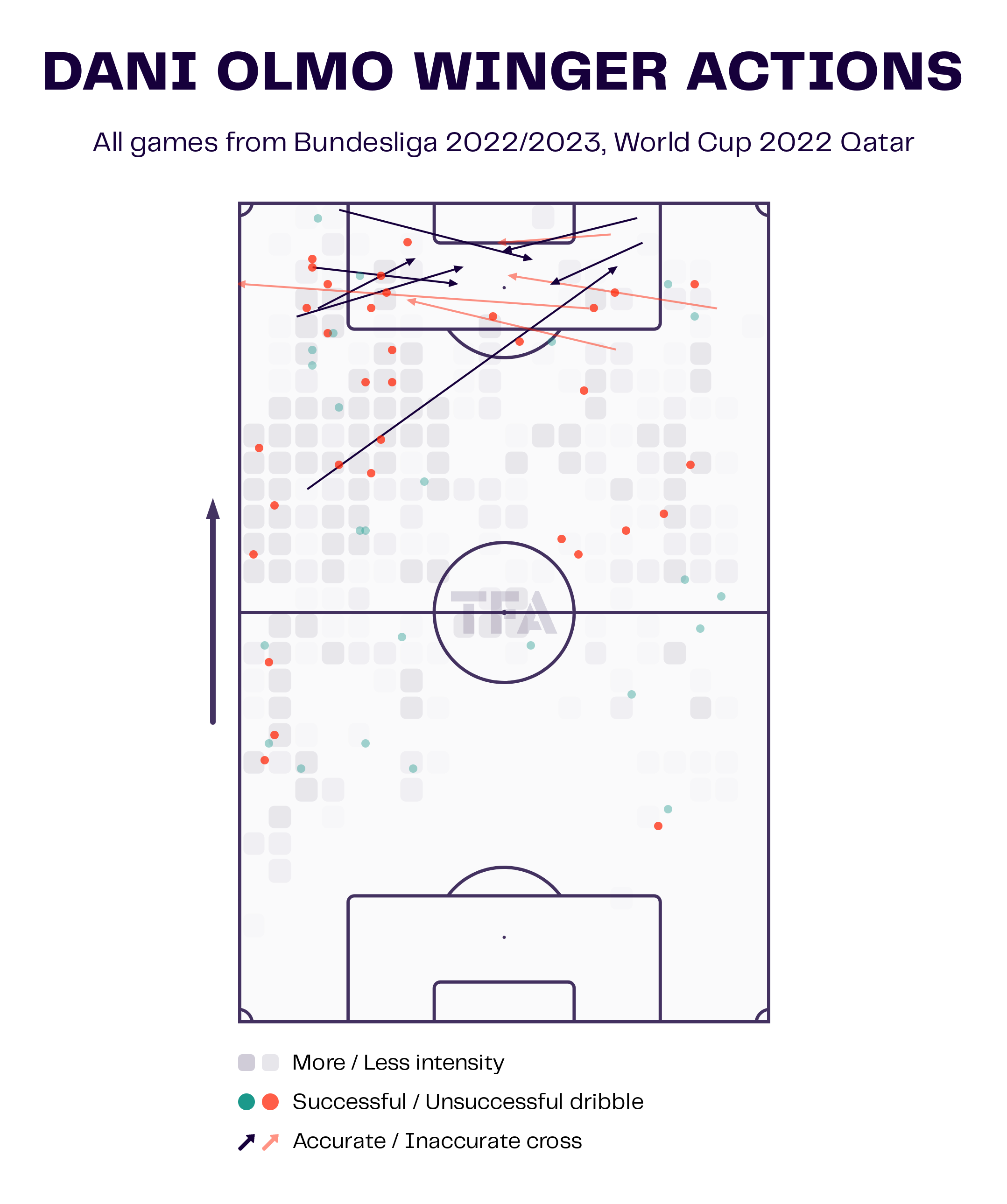 The above visualisation shows the actions of Daniel Olmo as a winger. He usually plays as the left winger for the Spanish national side. Olmo uses his dribbling skills to take players on 1v1 with success as well. He takes part in 13.22 offensive duels per game and wins 41.4% of them. Olmo is a player who plays quick passes and cuts inside to the centre more often than not. Therefore, he doesn’t cross the ball that much. He makes an average of 1.63 crosses per game with a 36% success rate.

Daniel Olmo’s journey has been an interesting one. He spent his youth days at Barcelona’s La Masia before making a move to Dinamo Zagreb. He then moved to Leipzig, where he is still playing. He has been a regular starter ever since and has played an important role in their rise in the Bundesliga as well. His stats and his performances clearly show he deserves more recognition than he gets.

Under the microscope: How Jonathan Burkardt’s lack of goal-scoring form has...